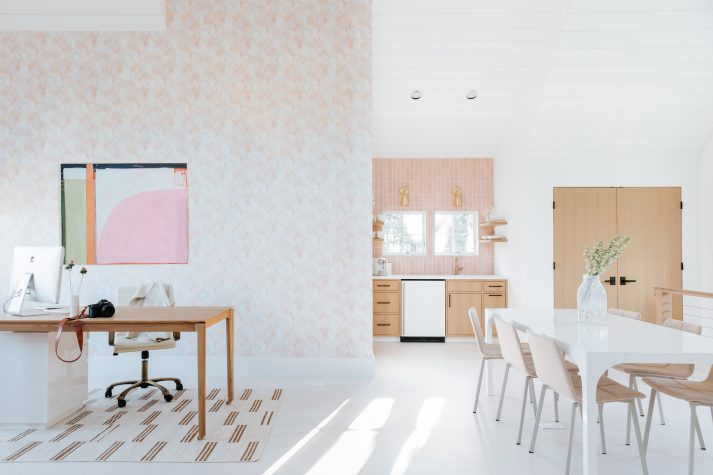 An abstract painting by local artist Laurie Fisher hangs atop Mirage wallpaper by A-Street Prints. The Ethnicraft oak desk sits on an offset stripe rug, a modern take on a traditional pattern. The handle on the mini-fridge is custom painted gold to match the Sazerac Stitches raw brass sconces in the kitchenette. 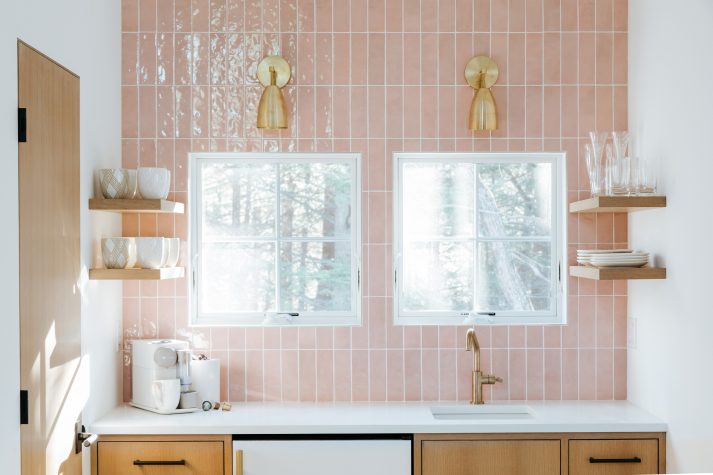 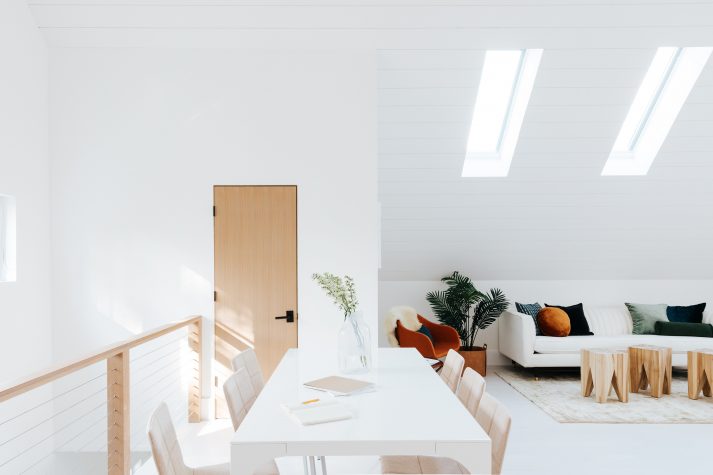 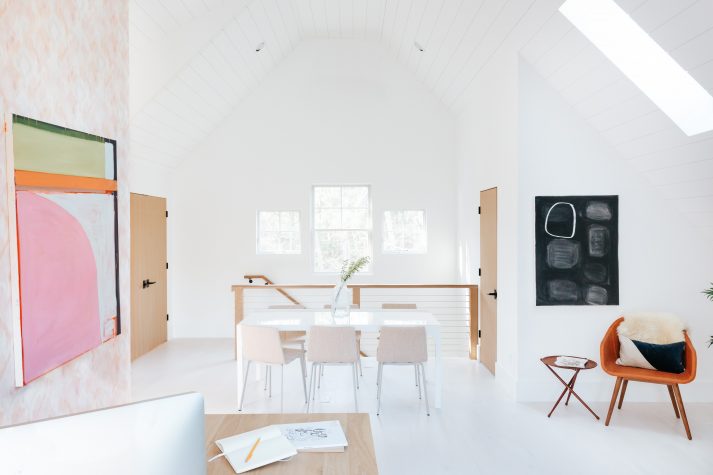 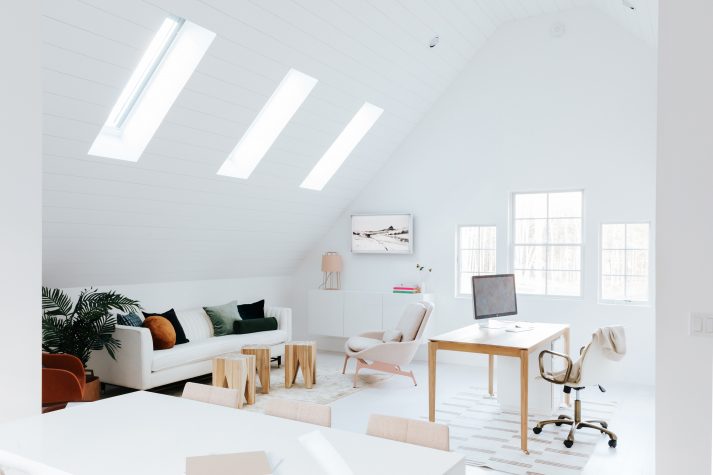 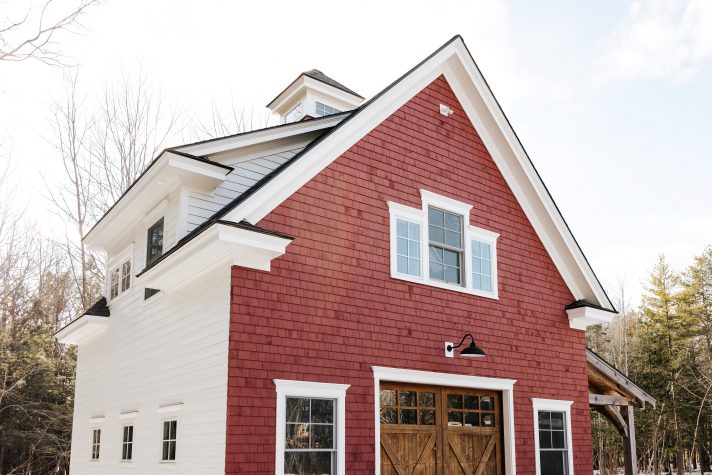 “I leave the house and walk a few feet to work there every day,” Malhotra says of the garage that holds her office.

Mallika Malhotra long imagined having her own creative space. As a photographer, brand strategist, and mentor who works with female entrepreneurs to develop and hone their brands, Malhotra desired a place that goes beyond the typical home office. She envisioned a space where she could meet with and easily photograph clients and someday host workshops and retreats. “The studio has been a dream in the making,” says Malhotra.

Before her husband’s medical career brought them to Maine, the couple, who have three sons, lived in a part of the country where real estate is particularly pricey. Although she had a home office, she met with clients in coffee shops and hotel lobbies, and oftentimes she photographed them on the street. When her husband took a position in Portland, Malhotra’s dream became a reality. The couple purchased a shingle-style house in Falmouth Foreside with a detached, barnlike garage topped by an unfinished second story.

Pappas partnered with local builder Matthew R. Cotnoir of MasterCraft Carpentry to transform the 650-square-foot raw space into a pristine, light-filled aerie. At the start, Malhotra’s husband proposed that the team tear out the framing for the ceiling to vault it, so the room is now almost 20 feet high at its peak. Malhotra deems the move “brilliant,” noting how much airier it made the space feel. “Anything we envisioned, Matt [Cotnoir] just said yes,” Pappas recalls. “It was really refreshing.”

Three evenly spaced skylights help brighten the lofty studio. “Winters are long in Maine; that natural light is medicine,” Malhotra says. Pappas notes that they also added two windows on either side of the existing window in the back of the building. “It balances the windows in the front, and brings in more light,” the designer says.

Knowing that Malhotra admired the shiplap ceiling of the great room in the main house, Pappas suggested they create one in the studio too. The treatment provides some visual connection between the structures and a hint of a classic Maine sensibility. The rectilinear white oak and stainless-steel cable stair rail reinforces Pappas’s pristine design.

To keep the shell sleek, there is no trim around the doors or the windows, or where the walls meet the wood ceiling. “Drywall wraps around and returns into the window with a corner bead,” Cotnoir says. As for the (deceptively) simple oak slab doors, the builder says that they were the most challenging part of the project. “Without trim to hide gaps or uneven edges, every door had to be cut perfectly,” he explains.

The project’s other big challenge was refinishing the stair treads, risers, and nosings to exactly match the white of the prestained engineered hardwood floorboards. “The pieces for the stair came from a different company than the flooring, and the color was way off,” the builder says.

Like the floors and (eventually) the stairs, the walls and the ceiling are a clean, crisp white— Benjamin Moore’s Chantilly Lace to be exact. “The bright white bounces light around the studio but isn’t sterile,” Malhotra says. “Samantha picked a white with warmth, but enough coolness so there is no yellow cast in my photos.”

Photography was also front of mind when it came to maximizing the floor plan. “Mallika wanted different vignettes that would serve as backdrops for her pictures,” Pappas says. Each area within the larger space—the kitchenette, the conference table, the desk, and the seating area—serves double duty in terms of everyday utility and as a photographic environment. “I can use the kitchenette for the coffee shot, the desk for the working woman shot, [and] the sofa for a shot with a laptop,” Malhotra says.

While the fresh feel of the space works well for any situation, Malhotra knew she could increase the options in her relatively small space by choosing easy-to-move furniture. “We intentionally chose portable furniture so I can create different experiences,” she says. And then there are the props, which she stores in the large closet at the top of the stairs. “I have all sorts of props to tell the stories of my clients,” Malhotra says. Among them are mugs, baskets, books, affirmation cards, champagne glasses, a magnifying glass, an old telephone, a blowhorn, confetti, and fake flowers and plants. “People can come and make it their own,” she says.

Pappas nestled the kitchenette between the capacious prop closet and narrow bedroom, which she located in a corner that would not block any front- facing windows. “It was a little tricky to lay out because we wanted as much natural light as possible in the main space,” she says. (The bath is in the corner behind the stairs because that’s where the plumbing line came up.)

Wallpaper with an abstract wash is the backdrop for the desk, an oak dining table that Pappas fitted with casters. “The casters raised it just enough to slide a file cabinet underneath,” she says. Malhotra, who was a tad nervous about the wallpaper going up so high, loves the look and appreciates its versatility. “It’s like another prop,” she says. As for that being the right wall for the desk, the homeowner admits, “I didn’t listen to Samantha at first and kept playing around with the placement; she knew it should go there all along.”

A white lacquered conference table surrounded by chairs in a whisper of blush sits off to one side of the desk, and in front of it a low-slung sofa stretches under the eaves. Malhotra lauds the upholstered lounge chair that is sometimes nearby. “It’s a great size; you can sit crisscross applesauce on it,” she says. “I move it around a lot.” A trio of jaunty teak stools with a Calicool vibe that work as stools or as tables rounds out the arrangement.

Finally, between the sofa and a wall of the bath, a faux leather chair with a molded, midcentury silhouette and a vintage walnut tripod table compose Malhotra’s headshot corner. It’s got a bit more of a masculine mood than the rest of the place, though Pappas points out that it doesn’t feel disjointed. “The camel leather is nice with the pink and ties to the hint of orange in the wallpaper.”

Malhotra still swoons over her studio, hardly believing she gets to work here every day. Pappas’s preschooler, who hung out while she set up the space, was equally enchanted. “She kept asking if this was my office,” the designer says. “I wish!” 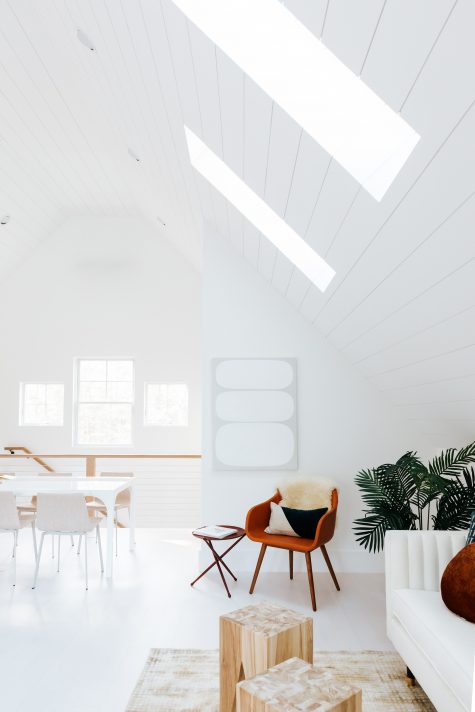 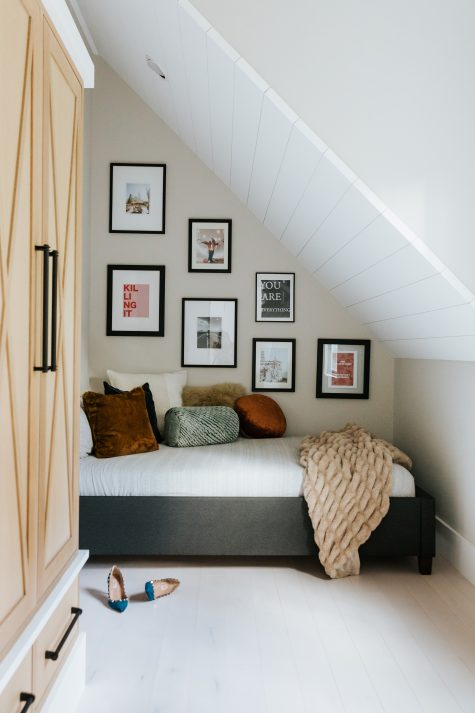 Reynolds Custom Woodworks crafted the armoire that Pappas designed for the guest bedroom, which was too tiny to accommodate a closet. 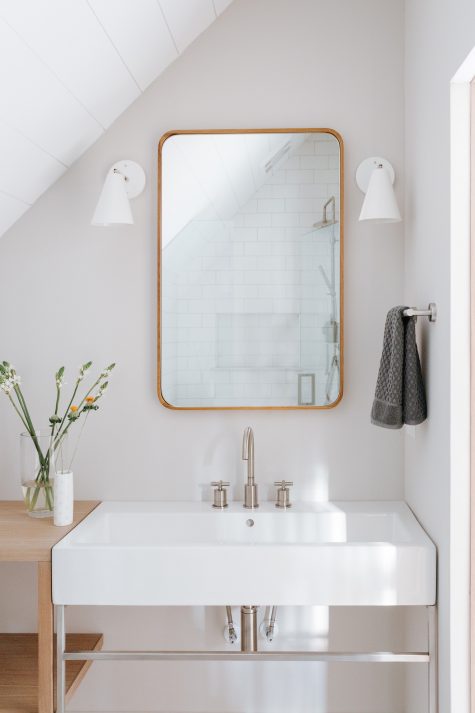 Cedar and Moss sconces flank a rounded white oak mirror from Rejuvenation in the bathroom, while custom oak shelves fill the space and provide storage next to the washstand. 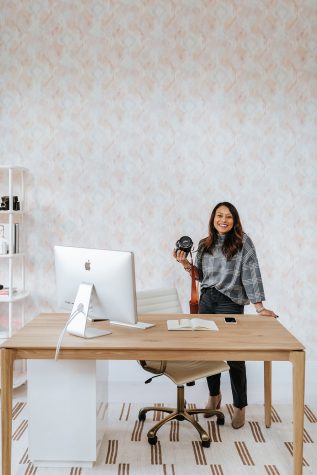 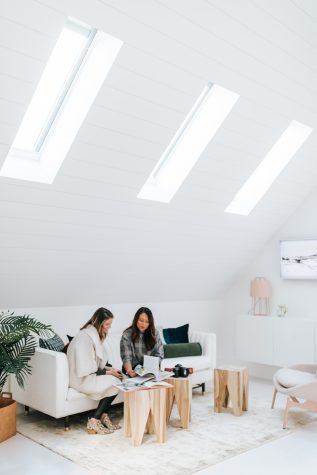 A neutral rug delineates the seating area where the designer (at left) and the homeowner (at right) perch under the new skylights. “The rugs play with different patterns and textures,” says designer Samantha S. Pappas. “The one under the desk is graphic while this one is abstract. 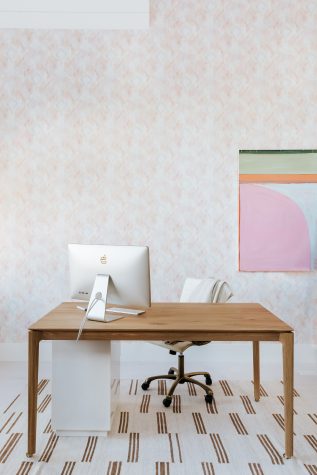 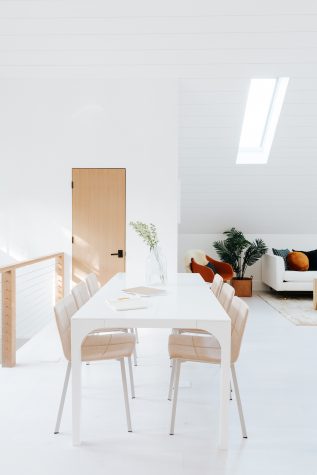 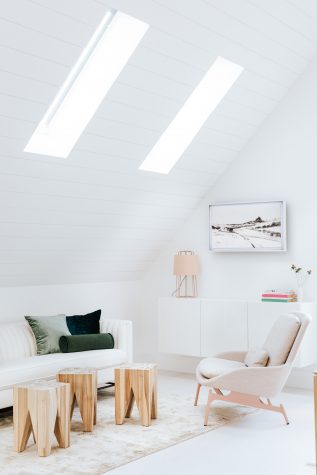 A digitized charcoal drawing by local artist Sarah Madeira Day is featured on the Samsung Frame TV above a floating cabinet from IKEA; the pink table lamp and lounge chair are from Blu Dot. 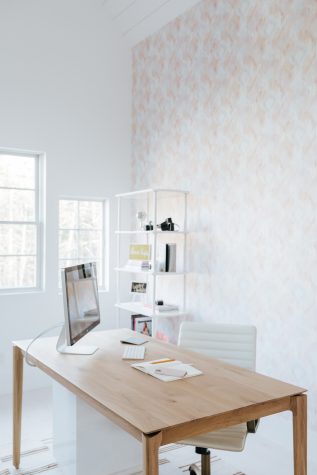 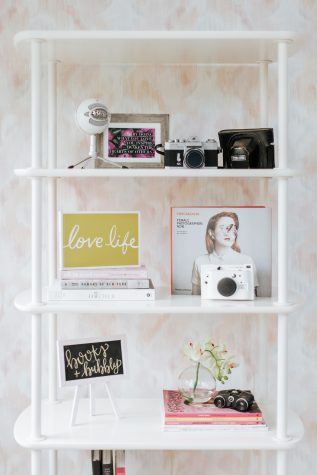 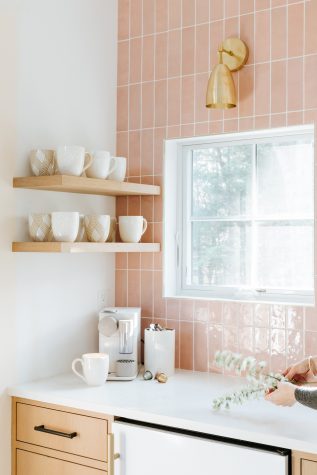 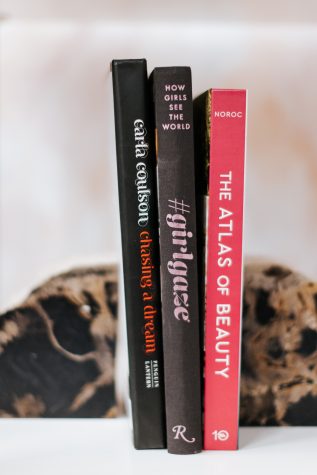 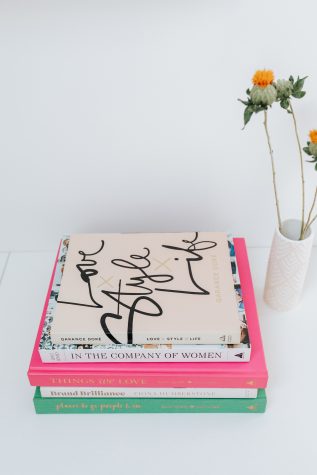 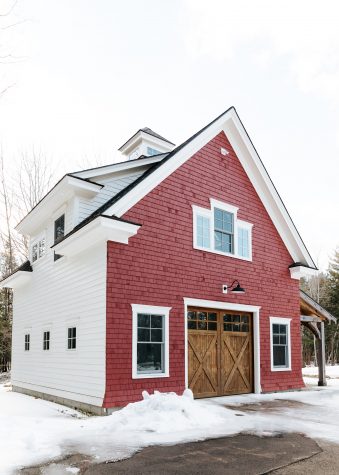