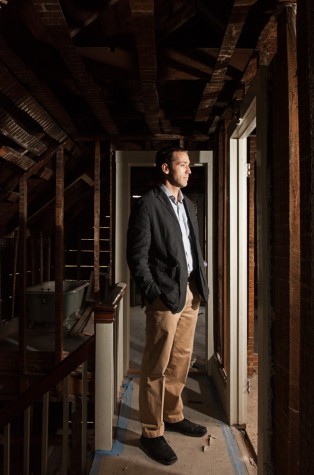 Tom Landry, owner and founder of CornerStone Building and Restoration, stands inside a current project in Portland’s East End neighborhood. “We’re going to try and retain, restore, and honor as much of the house as we can,” he says of this project. “If it doesn’t need to be replaced, don’t replace it.” 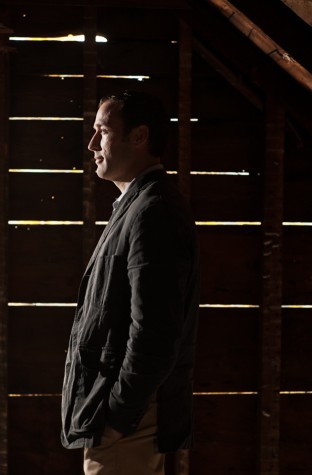 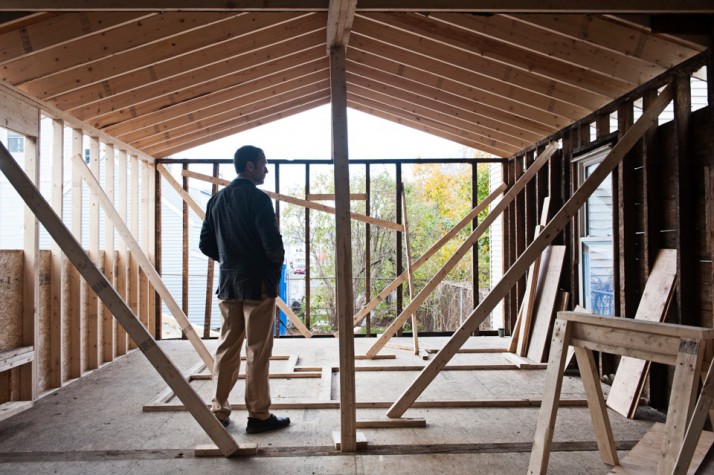 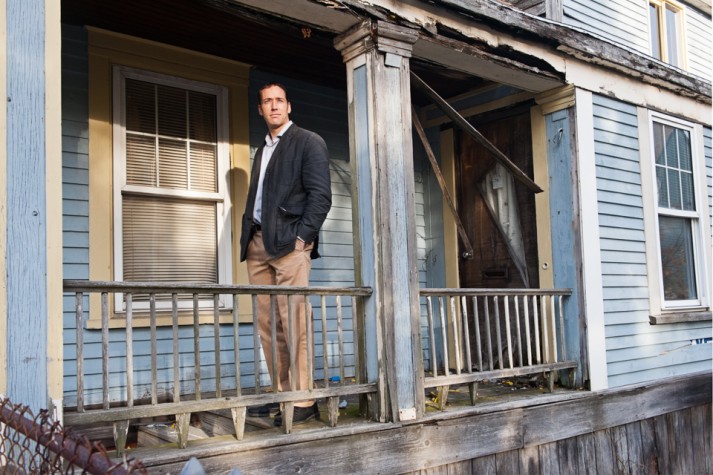 Growing up in a big old home in small-town Maine, Tom Landry always knew he wanted to build his own business. Now, he has two

Smooth and well dressed, Tom Landry has an air of unflappable confidence. He walks with a sense of purpose and speaks without hesitation, as though each sentence has been vetted and found acceptable by some inner jury. Instead of meeting in his Congress Street office, Landry and I have embarked on a walking tour of Portland’s East End. He’s taking me to look at several properties he has renovated with his company, CornerStone Building and Restoration. Landry is the owner of both CornerStone and Benchmark Real Estate, dual ventures that naturally fuel each other. With Benchmark, Landry seeks homes that will fit his clients’ needs and specializes in properties in the greater Portland area. With CornerStone, Landry aims to restore old homes to their former glory or—ideally—to surpass it.

But not 10 minutes into our meeting, Landry breaks his composure. “Look at that!” he exclaims. “You see that medallion? It’s spectacular, that detail.” I peer into a window, wondering what it is that caused him to interrupt his own verbal flow. In the dim light, I can make out an intricate medallion on the ceiling. This is the Howard Street home of Anna Ginn and Tom Franklin, Landry’s friends and former customers. “Working with Tom was wonderful,” Ginn says. “I really valued his commitment to Munjoy Hill. He’s a real believer in the neighborhood. I think another developer would have ripped out the staircase or the front door, but instead he worked to preserve them.” Ginn says she continues to work with CornerStone whenever she needs a builder. I suggest that repeat clients are the best recommendation for any service, and she laughs in agreement.

“With real estate, you get a listing, you sell it, and it’s done. But this, to me, is real art,” Landry says, gesturing toward an old spiral staircase covered in sawdust. At the next stop on our tour Landry takes me inside one of CornerStone’s current projects, a gutted home on Montreal Street. We’re standing on the first floor of the Victorian-era structure, where nails jut straight out from bare wood and light pours in through plastic sheeting. It takes some imagination to see what Landry sees, yet his enthusiasm makes it possible. “You have to be able to see what is not there. You have to be able to look at a house and ask yourself, How can I change this to make it truly compelling? How can I make this into a place that someone will love?”

This passion for old, historic buildings doesn’t just apply to his work. Landry, along with his wife, Amy, and 18-month-old daughter, Maddie, live in a restored Victorian in Back Cove that he purchased in 2001. He first spotted the property while out jogging, and despite its dereliction (or perhaps because of it), Landry fell in love with it. There were squirrels nesting in the walls, and the front yard was overgrown with weeds, but Landry says, “I could see my future life there.” As in many of his projects, Landry kept the shell of the building intact but upgraded the interior to modern standards. It took months of hard work and long nights, with Landry often staying out until 11 p.m. with a headlamp and a sander, until finally it was ready to move into.

“When my mom first came to see my house right after I bought it she stopped on the front porch and started crying. ‘Why do you do this to yourself?’ she said.” Landry doesn’t know exactly, but he thinks it has to do with the transformation. “I want to do right by these old houses.” Now, he can’t imagine living anywhere else. “It’s not logical; it’s emotional.”

The love for fixing up old homes was instilled in him at an early age, by the very same woman who would come to tears on his dilapidated porch. Landry grew up in the village of Steep Falls as the youngest of 10 kids. Steep Falls, located in the town of Standish, is just 40 minutes from Portland, but at the time it “felt as far away as Fort Kent.” Landry’s family lived in an old Victorian house that always needed work. “It was modest,” he says. “My dad was a mill worker, a union guy, and before that, a dairy farmer. No matter what he did or how hard he worked—and he worked incredibly hard—he eked by.” Landry recalls spending nights at the kitchen table with his mother going over house plans and plotting small business ventures, like opening a farm stand or a grain store. Since money wasn’t plentiful, Landry found himself dreaming up ways to help support their large family. The seeds of entrepreneurship were planted in that old farmhouse outside Standish, and they didn’t take long to sprout. When he was in his 20s, Landry bought the old home from his parents, fixed it up, and sold it for a profit. “I caught the bug,” he says.

At 44, Landry’s life has changed considerably from the days when he would chase the family cows out of the road in Steep Falls. He’s now a passionate city dweller with a deep-rooted appreciation for Portland and its many architectural quirks. As we walk, he talks about the history of the East End, a part of town that spent nearly a century in general disrepair and has only just recently seen an uptick in property prices. “The wealthy just abandoned this area at the beginning of the nineteenth century,” he explains. He calls it a “mass exodus, a purposeful segregation” based on class and ethnicity. It’s clear that he’s done his homework, and equally clear that he loves this part of Portland. As we walk, Landry interrupts himself continually to point out particularly beautiful examples of urban landscaping and design, both old and new. While he praises the “grittiness” of the neighborhood, he also appreciates what new developers can bring to the table. In run- down homes, he sees not only potential for restoration but also spaces for modern design.

“The money is better developing new homes,” he admits later as we stroll through the darkening streets. Throughout his career, he has been cautioned by many people— developers, mentors, fellow real estate agents, even his own family—to choose one path: either real estate or building. But to Landry, that either/or approach doesn’t make sense. “Maybe I just like the rescue, the restoration,” he says. As we come full circle, back to his office, he returns to the idea of Portland as a place made of brick and wood that has been mapped out and reworked over centuries. “Great architecture makes up the fabric of a great city,” he remarks. While Landry can’t preserve every building, or even the interior fixtures of all the homes he works on while keeping their exteriors intact, he is able to rescue some of the city from the ravages of time. Brewster Buttfield, a designer whom Landry works with frequently, says this is Landry’s strength: his appreciation for striking, historic details coupled with his practicality, his knowledge of what modern fixtures are needed to make each building marketable. In these gorgeous homes, the façade tells one story and the interior tells another. Like CornerStone and Benchmark, they are two sides to the same coin. Or, more accurately, they’re two small pieces of a bigger, more complex picture—a portrait of a smooth salesman, a passionate historian, and a true believer in Portland’s potential.