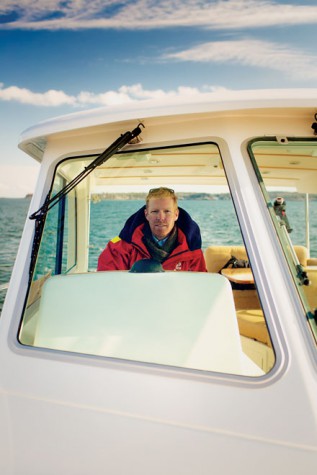 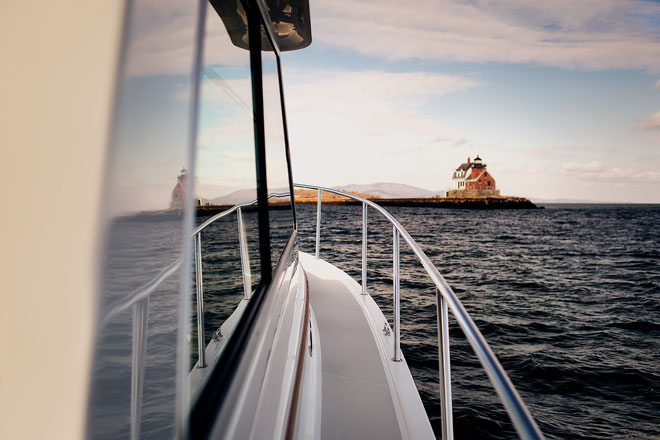 Clean lines. Another one of Burns’s design philosophies: his yachts should be just as fashionable 10 years from now. 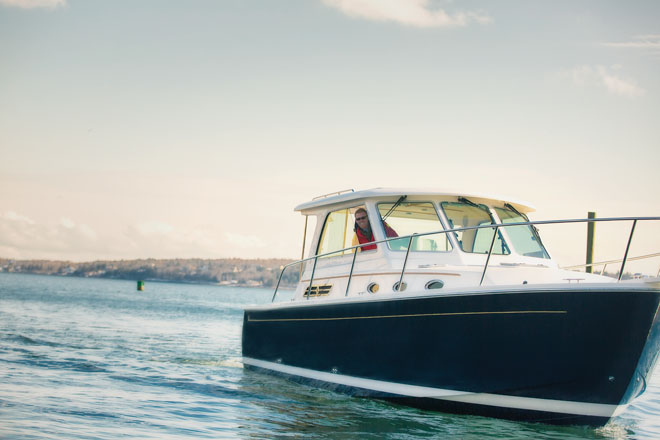 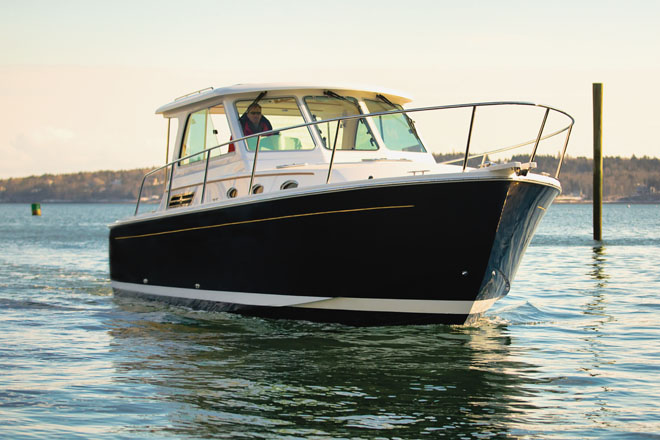 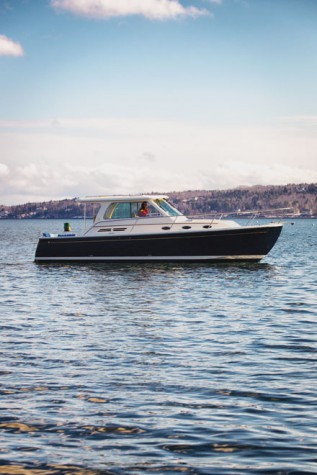 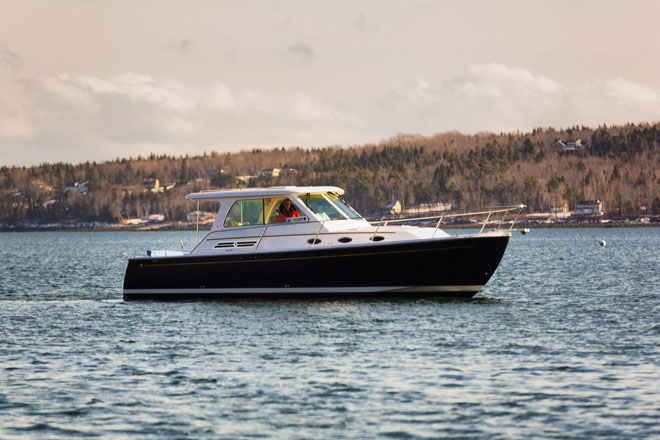 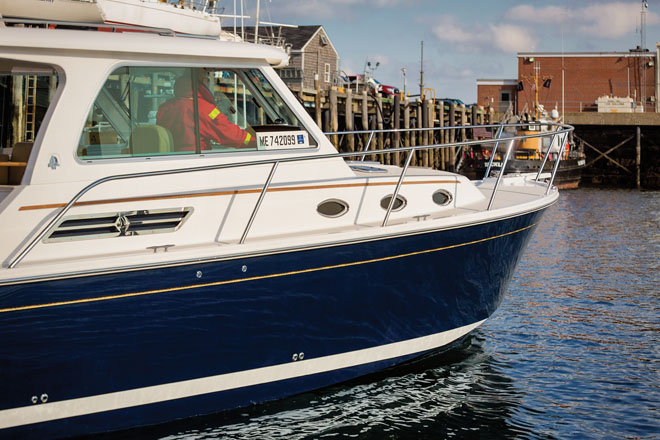 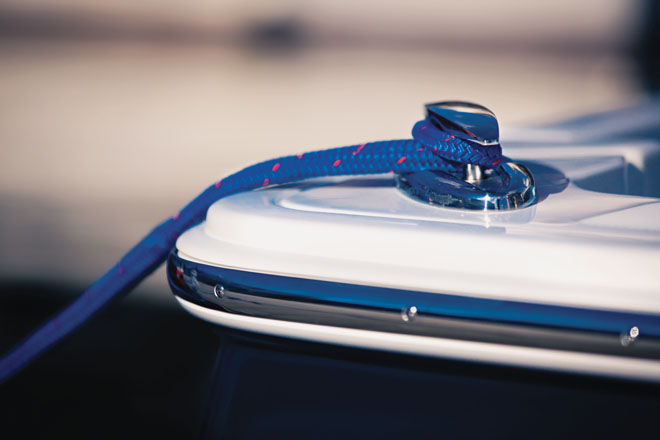 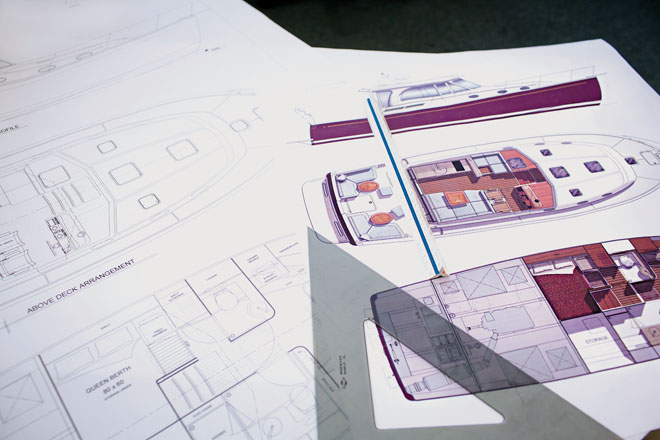 Burns’s office, where he does much of his 3-D design work. 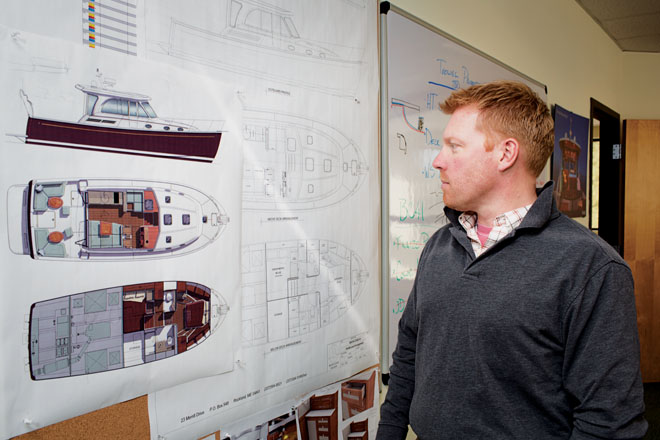 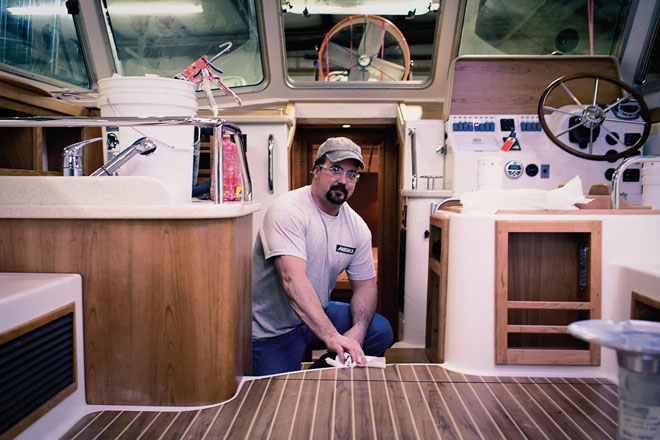 Every detail of Burns’s cabin design takes into account the reality of life on the water. 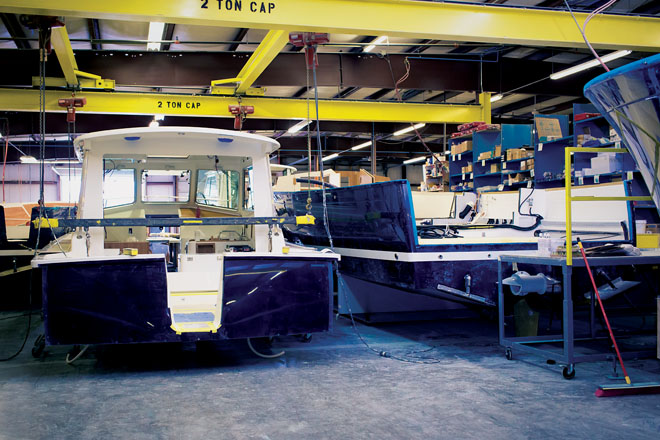 The shop where Burns's boats are built. 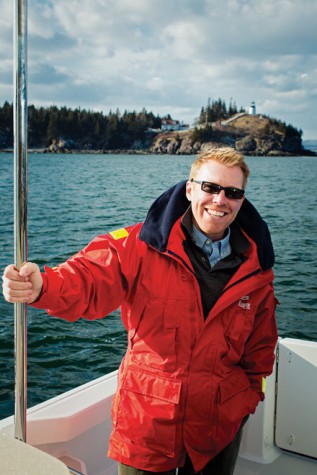 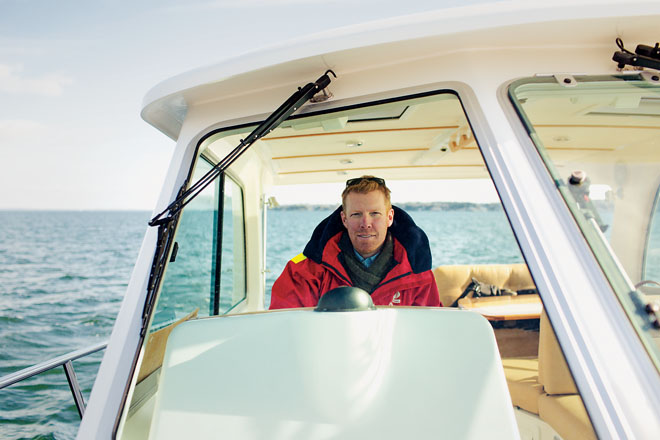 As Sabre Yachts/Back Cove’s vice president for design and product development, Kevin Burns is guided by a form-follows-function design philosophy: “You should be able to tell the use of a thing from the way it looks.” 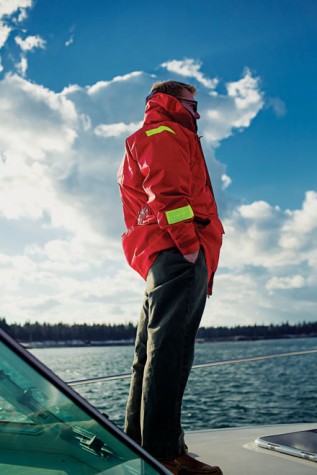 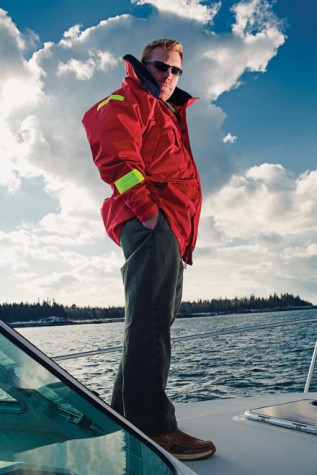 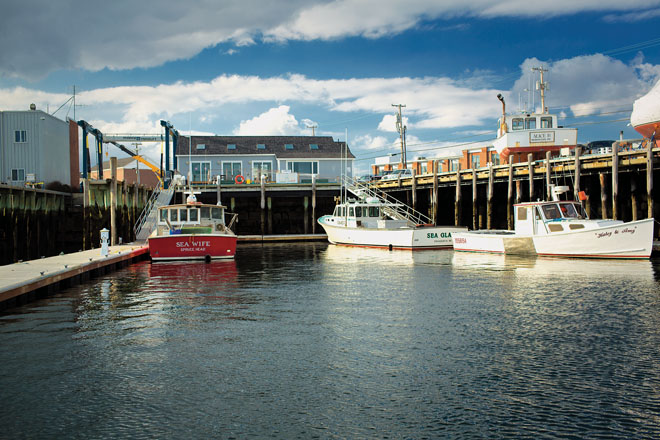 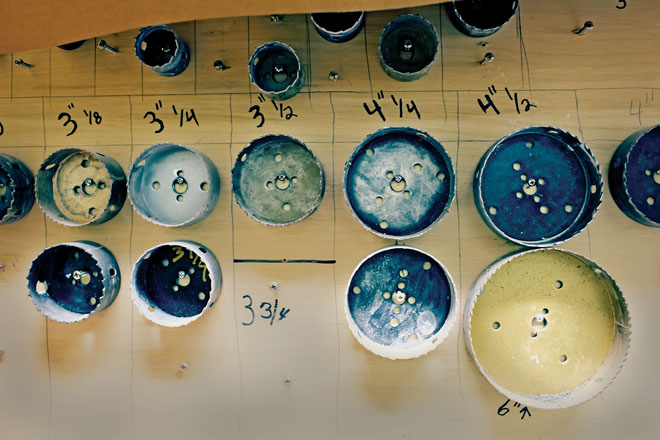 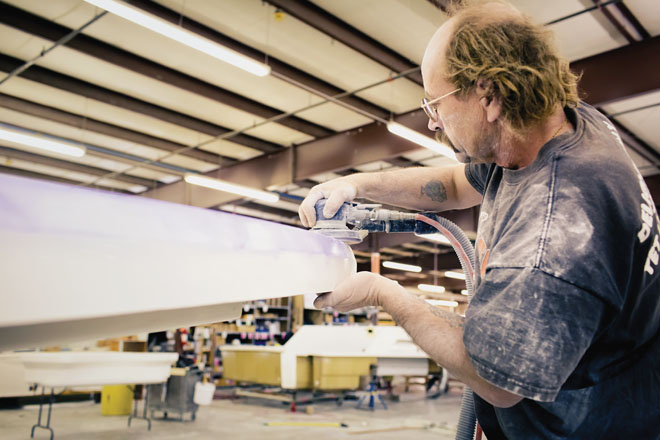 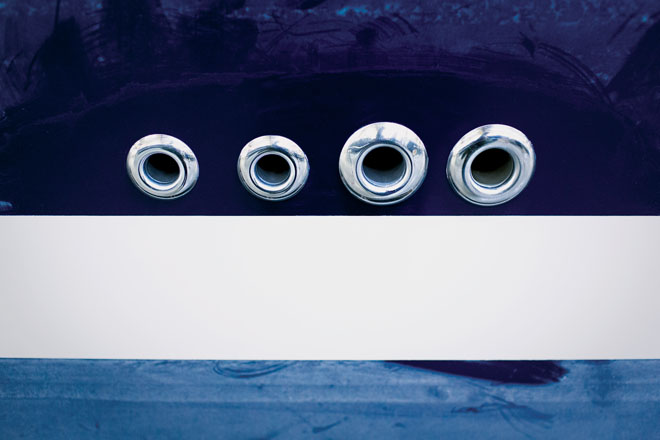 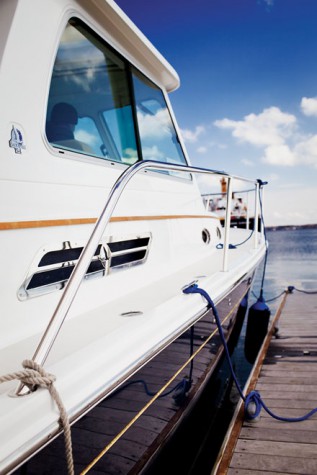 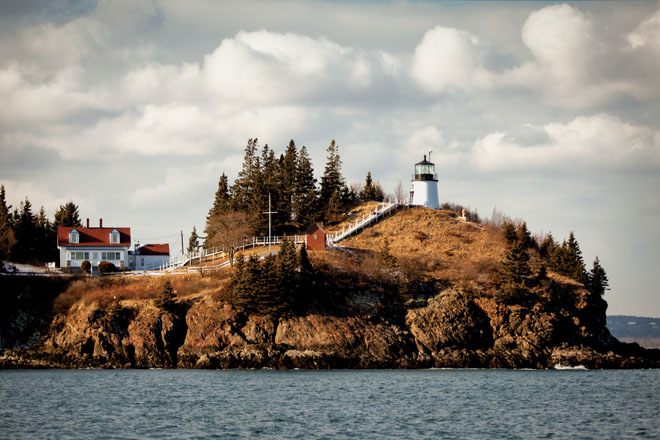 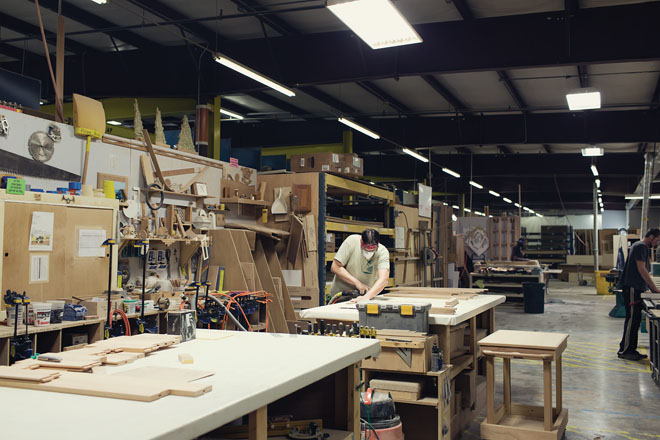 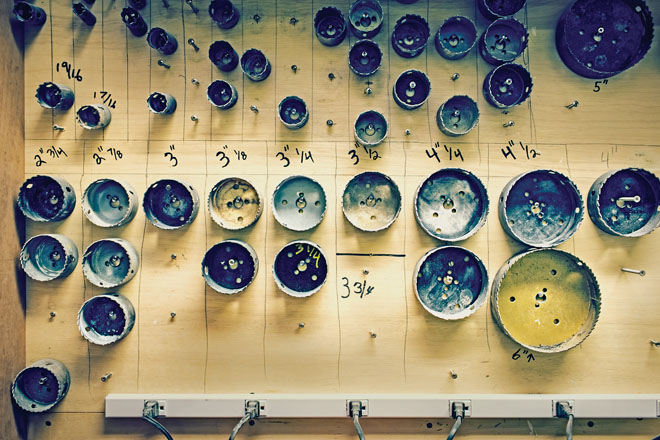 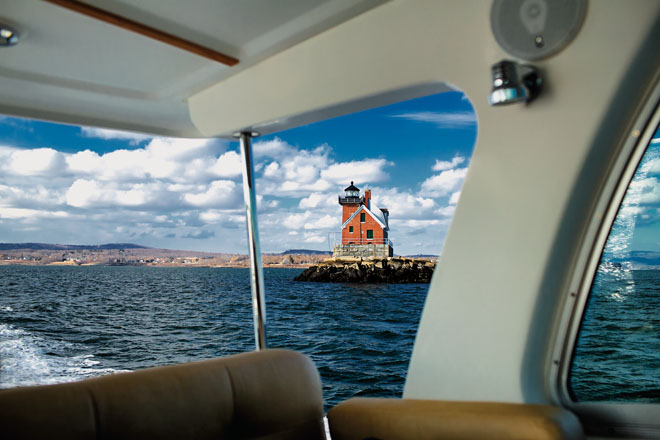 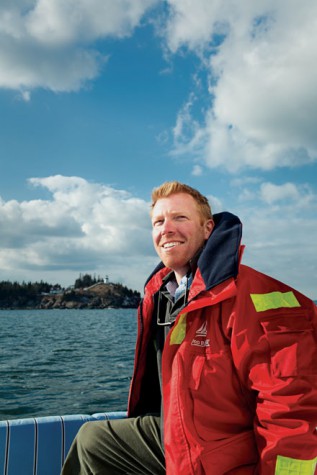 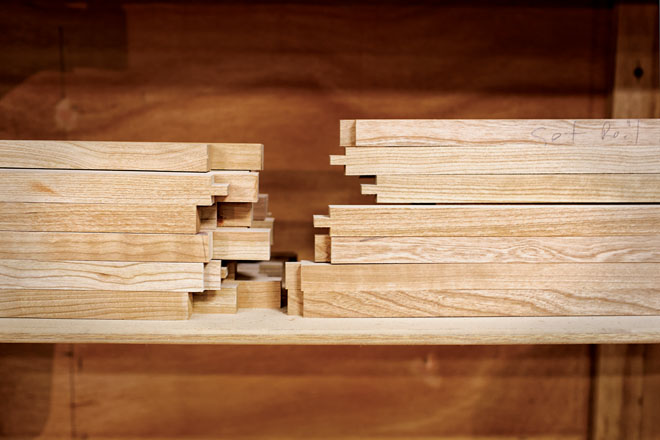 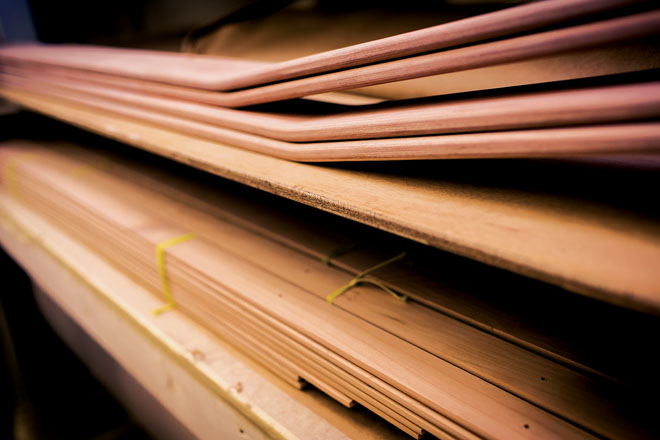 At Back Cove and Sabre Yachts, Kevin Burns is changing the way we live on the water.

It’s a Tuesday afternoon in late January, in the middle of a brutal cold snap, and the light in Rockland seems thin and fragile as if dimmed and hued for a rare occasion. When I pull into the parking lot of Back Cove Yachts, that occasion becomes obvious: suspended by straps from the boom of a crane is a newly minted Back Cove 37, the hull navy blue and sparkling, the shell of the cabin pearl-white, the rails chrome, and the lines as clean and purposeful as the silhouette of the small golden heron that adorns the back corner. Several men in parkas and scuffed work wear stand by, gazing at the yacht as if it had not just spent the last two weeks in production but rather descended from the winter sky in a single flash.

Soon, a trailer will come and take the yacht to Sandy Hook, New Jersey, where it will be sold on a showroom floor. But now, in its first breath of the frigid January air, just feet from the men and women who have created it, the boat takes on a different mode of being altogether. It is a transcendent thing, greater than the symphony of minds and skills, visions and trades that thrum inside the workshop hangar.

Inside the Back Cove offices and up a narrow spiral staircase is the helmlike office where Kevin Burns, vice president for design and product development, draws up the plans for Back Cove vessels as well as Sabre yachts. The sister brands are bound by common ideas: elegant design, intuitive functionality, and an aesthetic founded on Burns’s notion of Maine classicism. “You should be able to tell the use of a thing by the way it looks,” Burns tells me.

On his desk are two large adjacent computer monitors, displaying software that allows Burns to create virtual three-dimensional models of his yachts, which are then carved out of foam in actual scale and turned into molds. But there’s nothing incongruous about the high-tech plans for his yachts and their elegant, timeless lines. Though there’s something reminiscent of a downeast lobster boat in the form of Back Cove and Sabre yachts, they possess an intrinsic spirit all their own. “I want a design that’s going to be just as appealing 10 years from now as it is today, without ever becoming old-fashioned,” Burns says. “Design must advance technology, and technology must advance design. But it has to be a boat first.”

Burns’s life before he came to Back Cove and Sabre six years ago sounds like the chronicles of a character from a Joseph Conrad novel. A boy from Ohio who grew up tinkering with motor boats on the shores of Lake Erie, after attending Miami University of Ohio Burns felt the call of the sea and joined the coast guard. While enlisted, he patrolled the waters off the East Coast—from Haiti to Panama, during complex years of U.S. foreign policy—on a 270-foot cutter. After his coast guard service, Burns joined the merchant marines and captained a 150-foot vessel supplying methanol to natural gas wells in the Gulf of Mexico. Later, he enrolled at the Landing School in Kennebunk to study yacht design. His first job was as a designer at the Setzer Group out of Cary, North Carolina. There, he says, he drew up designs for boats that were worlds unto themselves: staterooms, glass elevators, suspended bridges. But he was unfulfilled. The work he put into these gorgeous beasts was often distant from him; once a luxury yacht left port, Burns never saw it again. His years at sea long past, he moved to Rockland to work with Back Cove and Sabre, and he and his wife started a family.

The secret of Burns’s design insight has a lot to do with the fact that the shop where his boats are built is just a few seconds’ walk from the desk where he dreams them into life. You can smell the fiberglass resin through the wall, hear the sounds of careful construction as if it were in the room next door. Burns takes pride in what he calls the “symbiotic relationship” between his office and the shop floor. There’s no emailing between engineers and craftsman, no driving between site visits: it’s all right here in what Burns calls a “flexible space.” “Good design,” Burns says, “requires diligence on every level. It’s about minimization and efficiency. If I draw something up, I can bring it downstairs, and my guys can tell me if it’s going to work. If not, back to the table.”

All of this diligence is bound to Burns’s ethos of ideal maritime experience. “In a car,” he tells me, “you move through the human world, with glimpses of the natural world. In a boat, you move through the natural world with occasional glimpses of humanity. My goal is to mediate the human relationship with that environment.” To really understand how that abstract notion finds expression, I have to get on board that Back Cove 37 that has just been lowered onto the pads of a trailer.

Even though we’re not at sea, I can still feel the implication of the ocean from inside the cabin. In the stern, there’s a casual space with enough room for eight. Two steps drop into a helm/galley space, one of Burns’s recent innovations: he moved the galley into the salon rather than tucking it away, below deck. “In a house, the kitchen is the gathering space,” Burns says. A cook standing on the floor of the galley is at eye level with a seated passenger, thus integrated naturally into the social space.

I ask Burns about the engine. The single-prop Back Cove design, distinct from the dual-pod engineering of Sabre Yachts, is made for a boater who delights in “knowing how things work.” Burns flips a switch, and the entire deck rises out of the floor, on hydraulic lifts, to an angle of 45 degrees, until the entire engine is as accessible as the master stateroom. I’m speechless. “I really believe,” Burns says, half-laughing, “that design and technology must advance together.” Back in his office, we discuss innovation, including how a single joystick can maneuver the boat with the agility of a helicopter. With a red pen, he’s drawing arrows this way and that, sketching how the power generated from shorter shafts allows for maximum maneuverability. The streamlined efficiency in the production and design of a Back Cove yacht has a boyish zeal behind it. This is a young mariner’s dream world of wood shops, design computers, tools, gizmos, vague sketches and maps, and big visions. Perhaps it was the same dreamy spirit that lured Burns from the Midwest to the blue waters of the Atlantic. “Just when you think there’s no more to do, new technology presents a different way,” he says.

On my way through the parking lot, the sun is setting, it’s colder, and something feels different now. Empty straps hang loosely from the boom of the crane; the Back Cove 37 is gone—probably on its way south on Route 1 by now. And yet, even from outside, you can hear the whir of the Back Cove crew thinking the next one into existence.