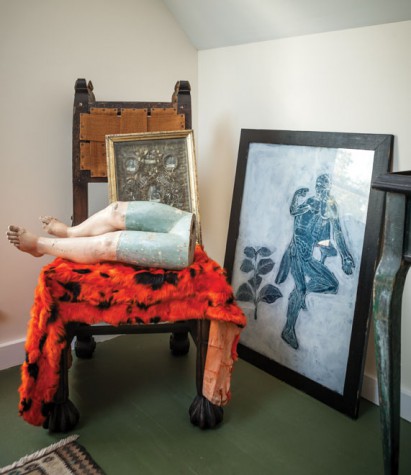 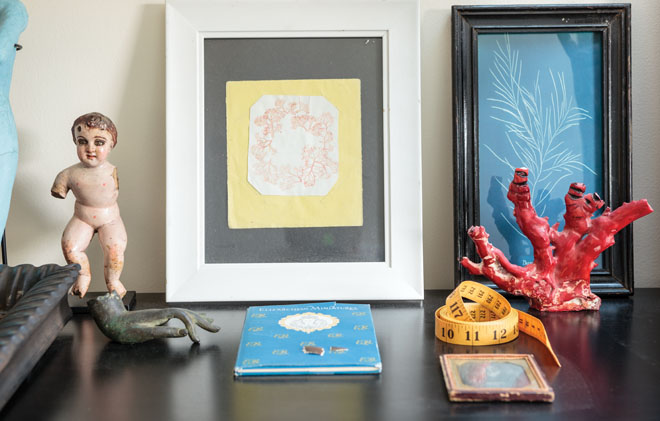 Another Spanish niño hovers next to a framed Victorian seaweed specimen, a British cyanotype of seaweed from the same era, and a tape measure, which is part of a larger collection. “I have a lot of older rulers, too; anything related to early technology fascinates me,” says Hamilton. 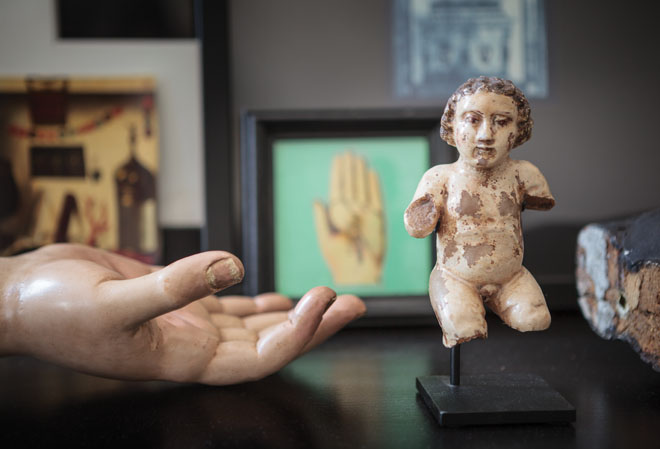 Looking at a rare alabaster niño (“baby”) from Spain displayed next to some of the appendages the figure is missing, you get a sense of how Hamilton pieces together his images 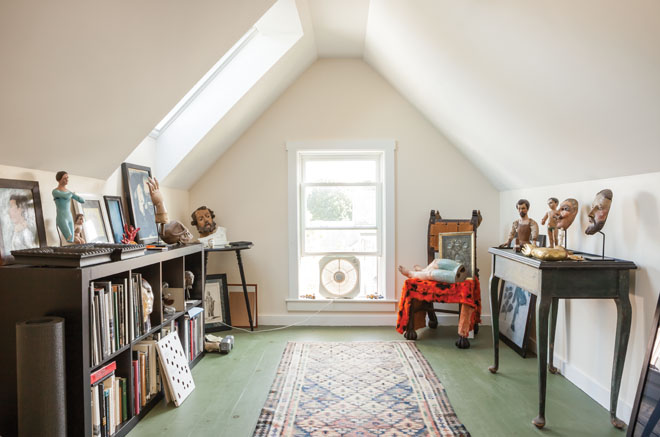 The artist’s studio is filled with fragments—a pair of legs from a Victorian-era Italian sculpture, eighteenth-century Spanish saints in various stages of dismemberment, and others—that find their way into his work. 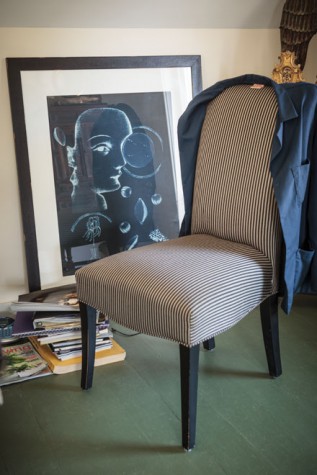 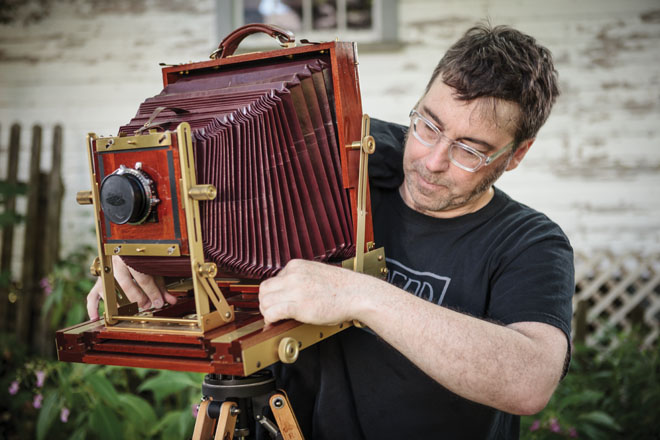 The artist makes an adjustment to his camera, which he had custom made. 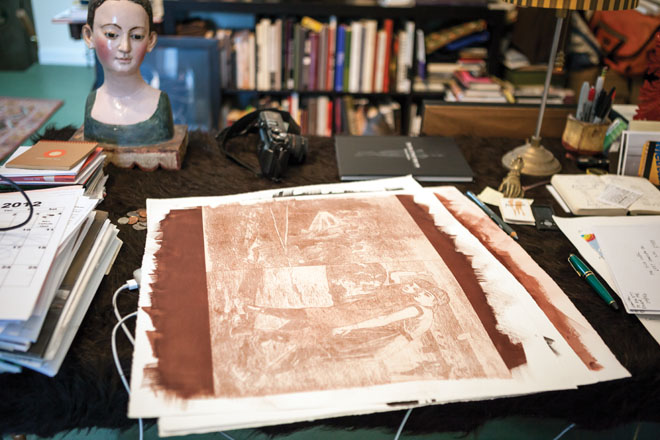 Outtakes from Hamilton’s show at the Portland Museum of Art. The images, created with photographic watercolor paint, are interpretations of Winslow Homer’s engravings. 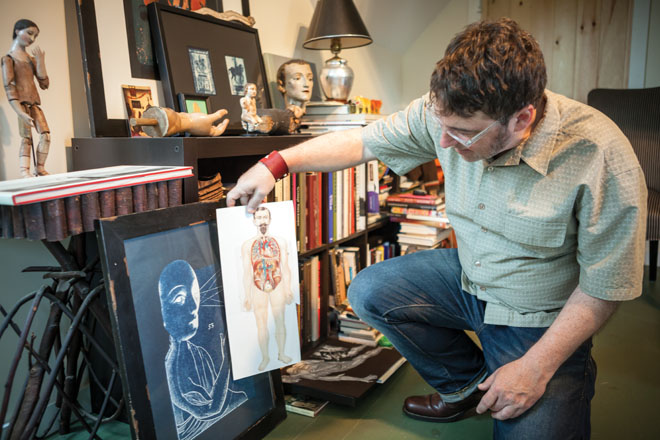 Hamilton illustrates the loose connection between an old anatomical drawing and the precise details in works such as Poet 53. 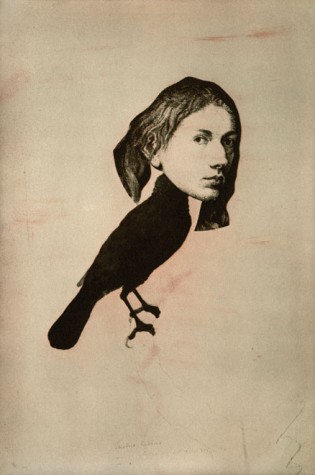 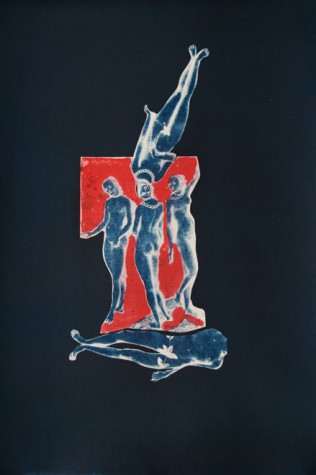 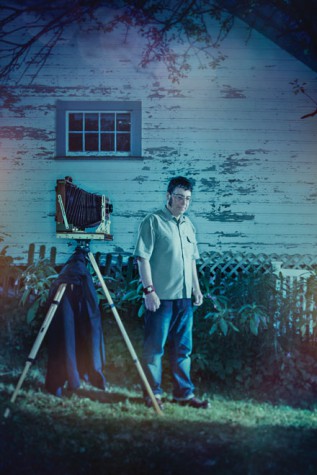 Brenton Hamilton, pictured outside his home studio with the 8 x 10 view camera he uses in his work.

Look closely at one of Brenton Hamilton’s shadowy, cerulean works and take your best guess: Is it a painting? Some sort of etching? A digital rendering? If “photograph” doesn’t immediately leap to mind, you haven’t insulted the artist. On the contrary, “I love when a viewer says, ‘How is that photography?’ and then convincing them that it is,” says Hamilton. “It means there’s an unusual relationship between that person and the picture I’ve made because he or she is experiencing something new. It’s really important to me that the images look enigmatic, like they’re not of this world.”

Part of the mystery is in the medium. Most of Hamilton’s works are cyanotypes—prints created by a nineteenth-century photographic process that is rarely practiced today. The technique, which produces a vibrant blue-and-white image, was used to create the first blueprints of buildings and ships. “It was mostly considered a technical process—artists didn’t gravitate toward it,” says Hamilton. He discovered the method while studying at the University of Maine at Augusta and was “captivated.” After earning a MFA in photography from the Savannah College of Art and Design in Georgia in 1992, he returned to his home state to become an instructor at what is now Maine Media Workshops and College in Rockport, where he remains on the faculty today. Three years into his teaching career, “I decided to really take on the cyanotype as a project, an investigation, to see what I could do with it. I was drawn to the obscurity and the fact that not a lot of people were employing it seriously.”

Devoting oneself to this archaic craft is no easy undertaking. Hamilton starts by photographing objects or pictures from his personal collection with a camera that produces extra-large negatives. Next, he mixes chemicals in a darkroom and brushes them onto watercolor paper to create a light-sensitive surface. An emulsion formed from iron compounds gives the cyanotype its signature blue hue. In another Victorian-era technique, known as platinum printing, he uses liquid platinum—or its close cousin palladium—to produce sepia-toned photographs. He then cuts the images from the large negatives, assembles them in a collage on the prepared paper, and exposes them to light. Hours later, the characters and scenes he has conjured spring forth.

A visit to Hamilton’s attic studio in Rockland feels a bit like stepping into the fantasyland depicted in his work. Little compositions made from antique busts and figurines, framed artwork, shells, and other small treasures cover every surface. In some cases, the arrangements bear a noticeable resemblance to Hamilton’s photographs. “I’m not saying it’s direct,” he says, gesturing between a table decorated with items including an eighteenth-century bearded head, a cast-plaster foot, an anatomical drawing of an ear, and a work called Woman’s Dream, which shows a face surrounded by a swirl of objects. “But there’s a kind of sympathy.”

“The things I live with and collect are a huge part of my life and work,” says Hamilton, who has a particular affinity for eighteenth-century Spanish sculpture and Italian engravings. He keeps the bulk of his antiques in storage and rotates them in and out of the studio when he needs fresh inspiration. Bookshelves on either side of the long space are crammed with volumes on his favorite subjects: art history, anatomy, astronomy, botany. “This room is where it happens for me,” he says. “Sometimes I get a glimpse of something in here in a new way and a picture becomes clear to me. I’m also looking at images in books and prints constantly. When something astounds me—a gesture, a fold in a cloth, a pair of dangling legs—I acquire it and make something new with all the different parts.”

For Hamilton, the work is ultimately “an eccentric story.” Certain elements and characters purposely reappear from one image to the next, and in some instances the figures serve as surrogates for the artist. “My own life is in these,” he says. “But for the viewer to figure out how that factors in isn’t something I’m concerned about. I’d rather you just be absorbed by what you see.”

Seventeen years into what Hamilton calls his “blue odyssey,” the artist isn’t ready to retire the cyanotype. He stays motivated, in part, by continually tweaking the process. Some of his works shimmer with touches of gold or silver leaf. Other images feature gum bichromate, a nineteenth-century technique that involves making watercolors light sensitive. In one application, Hamilton mixes the paint, brushes it onto a print, and re-exposes the piece to light to create a patinated wash of color. “I love combining methods, because then the viewer doesn’t have any access to what the process was,” says Hamilton, pulling a work called Reading Backwards out from behind a chair. In it, a muscular, cyan figure floats against a chalky backdrop created with gum bichromate. The man’s hand is curled toward himself, as if beckoning you to disappear with him into that uncertain drea