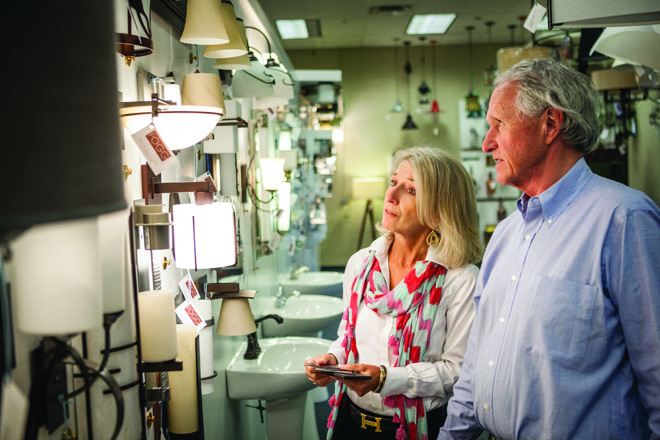 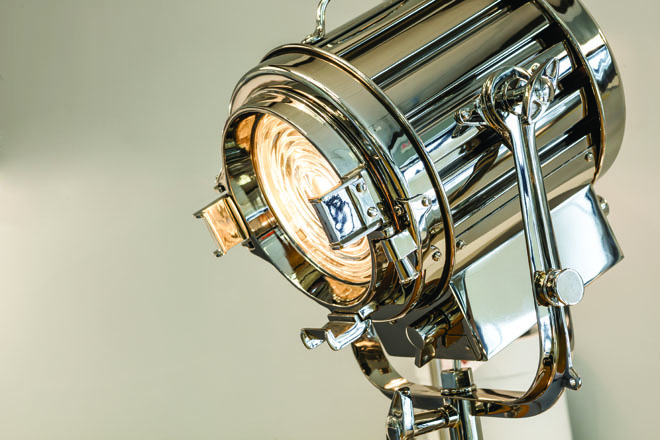 A polished nickel searchlight floor lamp by Ralph Lauren shines like a beacon inside Fogg Lighting. 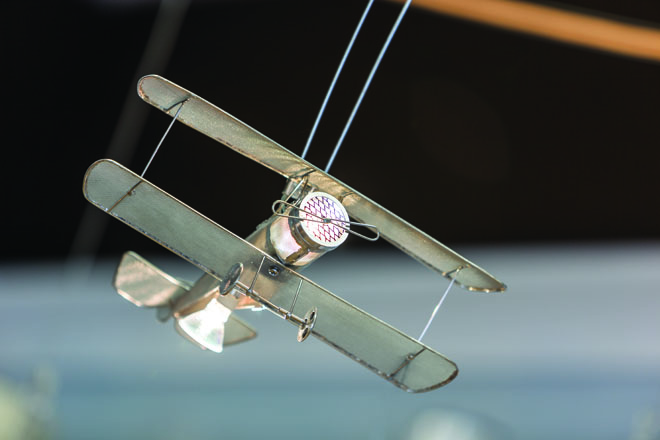 A pair of thin cables gives “flight” to a satin nickel airplane by Tech Lighting. 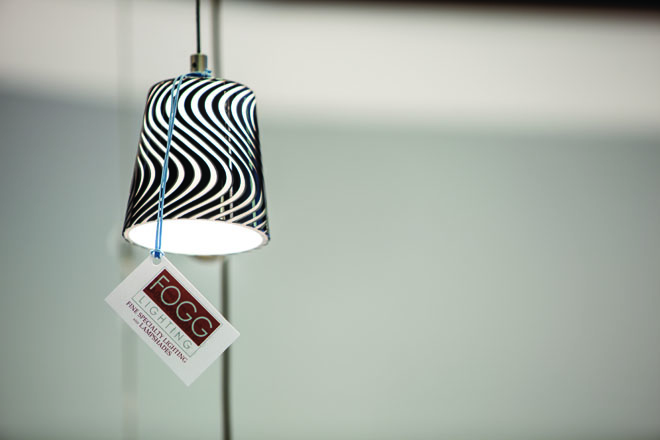 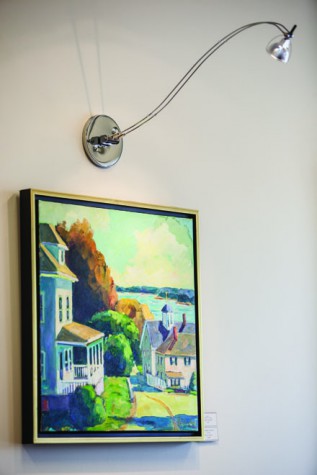 A polished nickel picture light by Tech Lighting illuminates an oil painting by Suzanne Harden, whose work is for sale in the showroom. 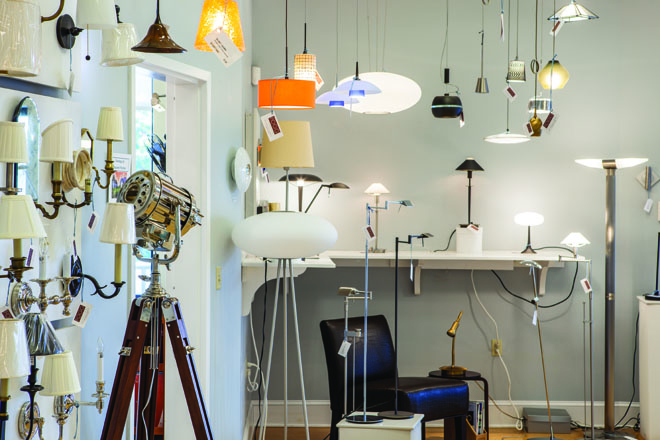 Traditional sconces are juxtaposed with a planetary collection of ceiling, floor, and table fixtures, including bright orange and blue pendants by Bruck Lighting and an elliptical floor lamp by Holtkötter. 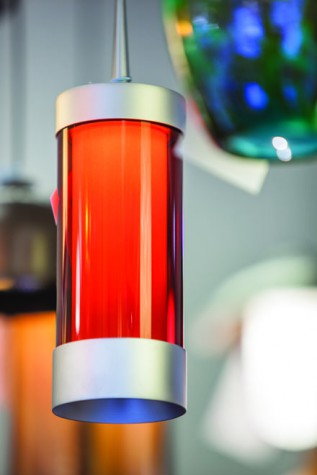 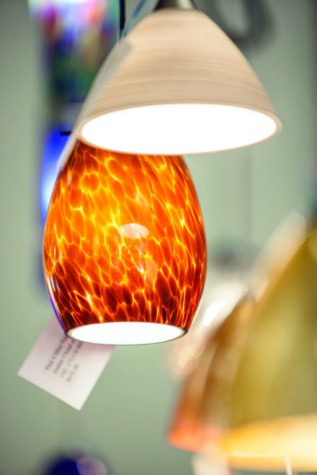 Sanford and Debbie Fogg, pictured before a display of Holtkötter fixtures. Hand-blown glass pendants, such as those by Besa Lighting, are “like jewelry for the home,” says Debbie. 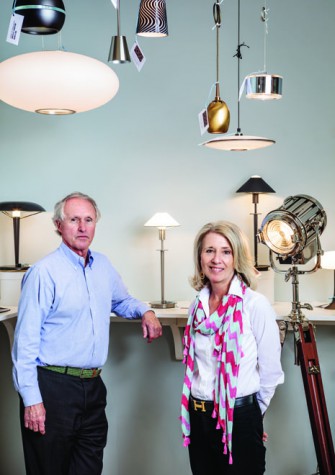 Sanford and Debbie Fogg, pictured before a display of Holtkötter fixtures. Hand-blown glass pendants, such as those by Besa Lighting, are “like jewelry for the home,” says Debbie.

Looking for artful fixtures and ideas on how to arrange them? Sanford and Debbie Fogg will illuminate you.

Wherever you wander inside Fogg Lighting in Portland, your gaze is drawn skyward. On entering, you are struck by a flurry of sphere, cylinder, drum, and UFO-shaped lights suspended in Calderesque groupings overhead. In an adjoining space, a collection of colorful kitchen-island pendants has the eye-catching effect of stained glass. And in the back room, lanterns edged in nickel, brass, and wrought iron, and chandeliers dotted with shades, candles, and glass beads, dominate the air space at either end.

Stationed all around are lamps with slender and curvaceous silhouettes, shades of every conceivable size and shape, and walls of sconces for bathrooms, living areas, and exteriors. Still, the shop maintains a boutique feel, thanks in part to its relatively modest floor plan. “We didn’t want a giant space,” says Debbie Fogg, who co-owns the 3,300-square-foot showroom with her husband, Sanford. “You know, a place where you walk in and the lighting just goes on forever.” And while you might expect a lighting showroom to be lit up like a Christmas wonderland at all times of the day, the Foggs keep most of their fixtures turned off (when they aren’t being photographed for a magazine story, of course). So instead of bouncing from one bright spot to the next, customers can focus on the artistry of the designs—the way sunlight whitens the facets of a Swarovski crystal chandelier, for example, or the richness of a velvety shade—and then switch them on for the full effect.

In addition to guiding customers through a dizzying array of fixture options—the store showcases only a fraction of what’s available—the Foggs offer lighting-design services. Debbie and the couple’s two employees are certified lighting specialists, an accreditation earned through the American Lighting Association, the industry’s trade group. And Sanford is a certified lighting consultant, which is the highest designation offered by the association and reflects more technical training. Practically speaking, these credentials mean that Fogg Lighting can help you determine how much light you need in a given room, what types of fixtures will work best, and where you should place them. “We’ll work on anything from a guest bathroom to a whole house—there’s no job too big or too small,” says Debbie, who encourages customers to bring in architectural plans, photos, or just simple drawings of their existing spaces for a free in-store consultation. The Foggs also meet with clients in their homes.

Given the couple’s background, you would think the Foggs had spent a lifetime in the lighting world. In fact, they were introduced to the field in 1994, when Sanford, a former paper-company executive, purchased a small lampshade-distribution business. In 2005, an interior designer they were working with suggested that the company broaden its scope. “She said, ‘There’s definitely a demand for another lighting source,'” says Debbie. “I wasn’t really working at the other business, but I told Sanford if he ventured into design I wanted to be involved because that’s always been an interest.” That same year, Sanford attended a lighting boot camp of sorts put on by the American Lighting Association in Chicago, and soon after Fogg Lighting was born. Two years later, Debbie took the course. “It was a pretty intense week of classes and at the end you’re tested,” she says. “And we have continuing classes all the time,” adds Sanford, who earned his advanced degree after completing a separate one-year program in 2009.

To appreciate the couple’s expertise, you need only consider a few of the potential pitfalls involved in illuminating a home. “A really common thing we see is recessed lights placed in the center of a kitchen, instead of over the work surfaces,” says Sanford. “So when you’re standing at a counter to chop vegetables, your head creates a shadow and it’s hard to see.” In bathrooms, people sometimes skip overhead lighting altogether and just install sconces around the vanity. “But if you put two recessed lights in there, it makes everything in the room pop,” he says. “You can choose the most beautiful tile and countertops, but if you don’t light them properly, you don’t get the full benefit of the work you’ve done.” His advice: “Meet with a lighting designer early in the process of building or renovating so you can do things right to begin with. Especially with something like recessed lights, it’s pretty hard to undo.”

“They have really educated me,” says Nancy Pierce, a client who has collaborated with the Foggs on two properties. “One joke we have is from when I was building a home on Cumberland Foreside. I said I wanted to use one kind of light bulb throughout, and Debbie smiled and said, ‘You can’t do that.’ She then proceeded to explain why different bulbs are important for different applications.” Industry professionals also seek out the Foggs for advice. “They are my go-to for sophisticated products, and they always have insightful ideas,” says Leandra Fremont-Smith of Leandra Fremont-Smith Interiors in Yarmouth. “I often do my own lighting plans, but when I need to illuminate a lot of different elements in a space, such as a large art collection and architectural details like columns and bookshelves, their input is invaluable.”

On a recent weekday, Debbie and Sanford are extolling the virtues of an elliptical chandelier composed of thin metal and wire and studded with sparkly, seeded glass shades. “In the fall and winter you can swap out the shades for dressier gold-leaf ones,” says Debbie. “You can raise and lower the chandelier with a counterweight, and clients love that the design doesn’t have a lot of mass—you can see straight through it.” Straight through to the galaxy of gleaming fixtures beyond.