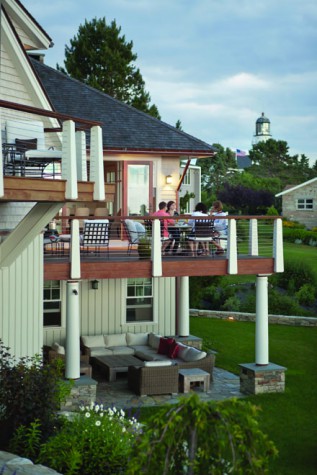 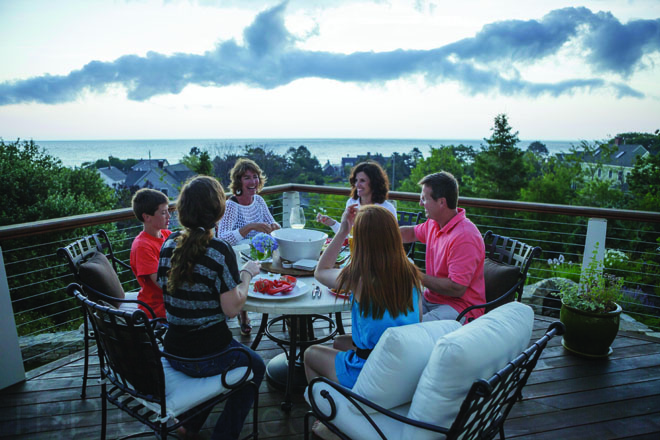 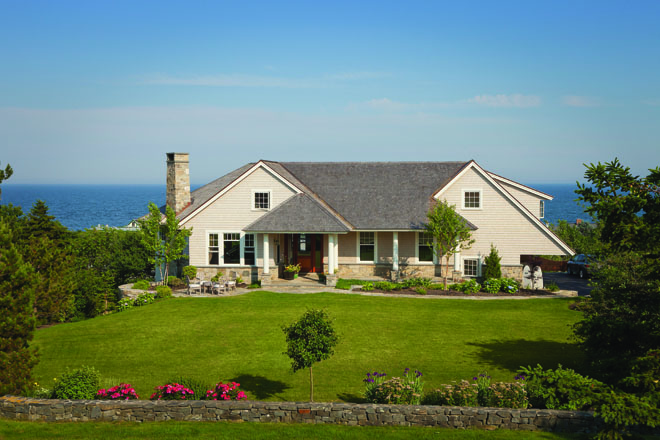 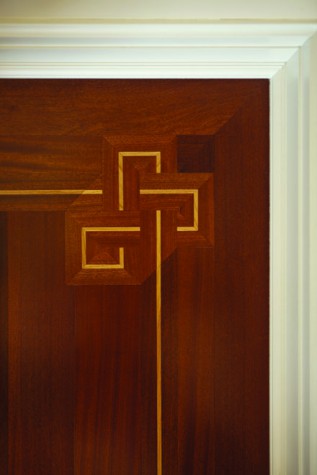 A detail of the inlayed floor. 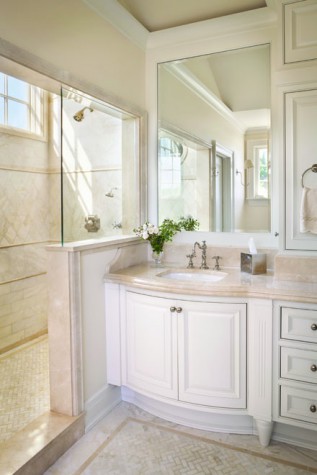 The bathroom was designed to reflect the soft color palette and natural daylighting that occurs through two large windows. Davis selected materials that were both light in color and light reflective. Cabinetry is by McIntosh and Tuttle Cabinetmakers, and carved marble details are by Morningstar Stone and Tile. 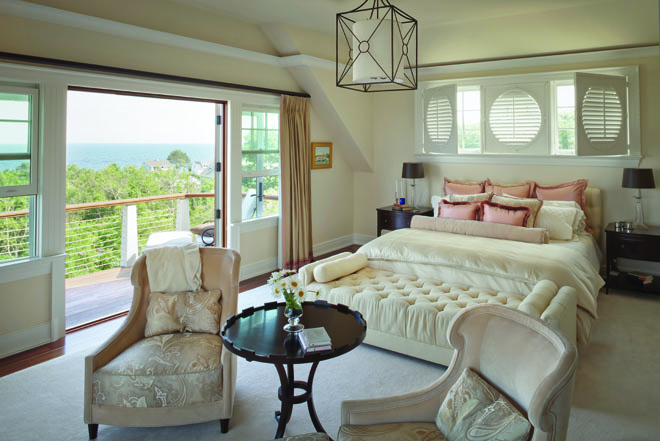 The inspiration for the interior design by Tracy Davis was “feminine, fresh, and open”. Davis designed the custom shutters in the master bedroom, starting with a napkin sketch. Friend and colleague Peter Glass constructed them. “I love them,” says Davis. “They’re unique and classic.” 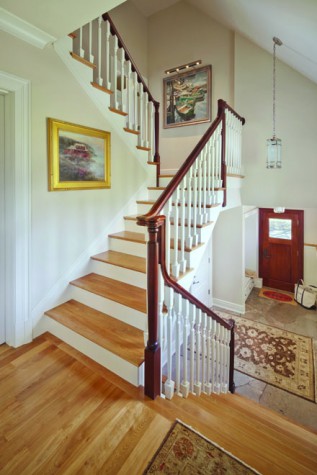 The floor plan unfolds in a series of half-levels, which limits the height of the home and keeps all the spaces separate but within close proximity of one another. 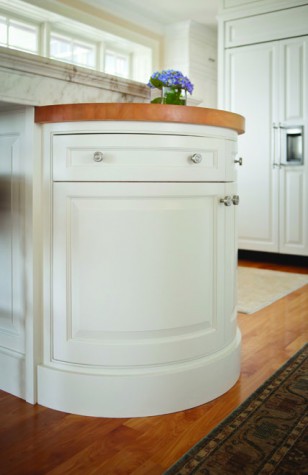 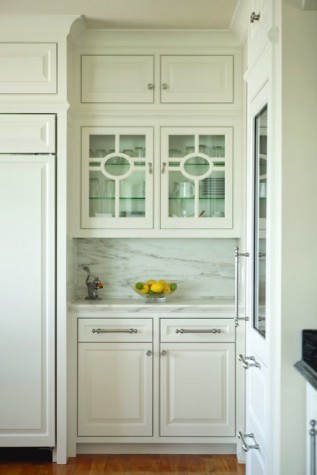 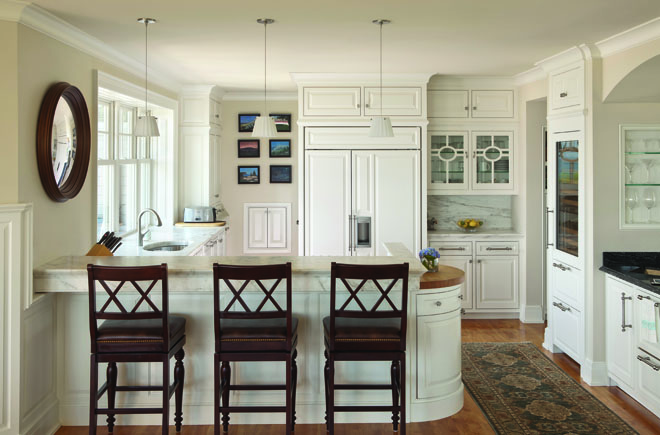 “The kitchen is the hub for all of us. It’s a gift to work in a kitchen that takes my eyes to the sea wherever I am in it,” says homeowner Julie Sheehan. Cabinetry in the kitchen and bar was designed by interior designer Tracy Davis and made by McIntosh and Tuttle Cabinetmakers. The marble countertop is by Morningstar Stone and Tile. 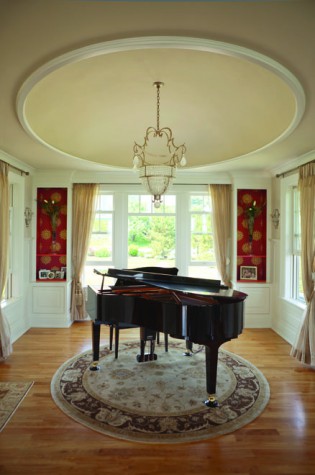 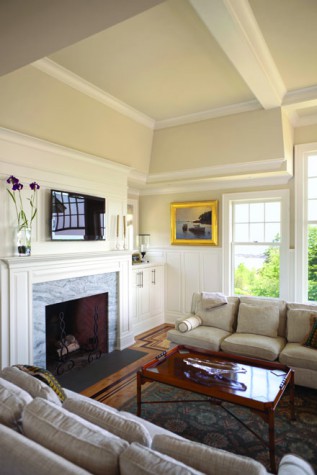 The architects identified the principal views and then designed each room to take advantage of at least one of them. Even the windows were chosen with the views in mind; taller windows bring in more light and were designed to provide unobstructed views whether you’re sitting or standing. M.R. Brewer created the custom built-ins in the living room.

A Cape Elizabeth house designed to unfold with the vista

Two Lights State Park in Cape Elizabeth is filled with the kind of dramatic rocky headlands that make Maine’s shoreline so spectacular. The area is named after the first twin lighthouses—built in 1828—on the coast of Maine.

Today, one of them is still active, shining its beacon 17 miles out to sea. Even Edward Hopper was inspired by the towers; he painted one in his famous work Lighthouse at Two Lights.

When a site and its surrounding area are so filled with natural beauty, designing and building a home that not only celebrates that beauty, but fits seamlessly into it, is not easy. Knowing the challenges she faced, Julie Sheehan hired a “dream team” to head up the design and construction of her house: architects Rob Whitten and Eric Laszlo of Whitten Architects, interior designer Tracy A. Davis of Urban Dwellings, and Dale Bragg of Dale Bragg Builders—all of Portland.

“First and foremost, we wanted it to be a good neighbor,” says Whitten. In other words, the house had to fit into the surrounding landscape with as little visual impact on the neighbors as possible. “We wanted to match the scale of the older homes on the street and not obstruct their views,” he explains. Working within the confines of the site, the architects developed a design that pulled the house back from the street, with a one-story eave on the street-facing side and a two-story eave on the ocean side. Porches and rooflines would provide scale and balance, and the discreet driveway would be placed a half-level below the landscape. The result is a house that appears to be recessed into the property.

Although the house technically has four levels, each floor is only a “half level” to limit the overall height of the structure. As you enter through the garage, the main living area is a half-level up and the children’s floor is a half-level down. And from the front door, the master suite is a half-level up, with the office (Sheehan’s get-away space) a half-level up from there. The result is a collection of spaces that are separated but still in close proximity to one another. The half-level changes encourage movement throughout the home and also provide different perspectives for the views.

Maximizing ocean views and optimizing sunlight throughout the day, from season to season, were critical considerations in the architectural design. Whitten and Laszlo began by raising the first-floor elevation four feet to get the best vantage point. They then identified the principal views—to the southeast, south, and southwest—so they could design every room with at least one major vista. The team specified wider, taller windows and doors to bring more sun, thus more solar gain, into the living spaces. Even the window mullions and meeting-rail layout (in a cottage style, six-over-one) were designed to provide unobstructed views whether you’re standing or sitting. In addition, the ceiling heights change: they are lower at the points of entry and get higher as you move through the house to create a natural flow, with daylight and views gradually unfolding.

Having worked with Sheehan before, interior designer Tracy Davis knew her aesthetic well. As the mother of three teenagers, Sheehan wanted an open floor plan with the kitchen, dining, and great-room areas connected to outdoor living spaces wherever possible. She also wanted a safe space where her kids could hang out and entertain.

Davis and the architectural team designed a ground floor at the level of the backyard that is made up of three bedroom suites for the children and a laundry room. “This space is their space,” says Sheehan. “My children have reached the age where I want them to entertain friends at home. Their rooms, the outdoor living area, the fire pit, and the yard are all accessible from their level. They have a ball roasting marshmallows, watching movies, playing video games, and I cannot hear a thing,” she says.

In addition to spaces that suit her family, Sheehan wanted a home that reflected her personal style as well. Davis’s inspiration for the interior design was “feminine, fresh, and open.” “I’ve always been taken with Julie’s sense of personal style,” she says, “and I wanted her home to be an extension of that style.” Her palette, a layering of tonal whites mixed with subtle pops of color, showcases the views and Sheehan’s lifestyle. In addition to the interior spaces, Davis designed equally beautiful yet carefully restrained aesthetic touches: traditional wainscoting and wood detailing; custom millwork and cabinetry in the kitchen, baths, closets, and office; and shutters in the master suite. These graceful finishes, combined with the soft color palette, take nothing away from the view.

While the designers orchestrated their plans for the inside, builder Dale Bragg had to overcome a major construction challenge on the outside: the site development and related earthwork. “The lot was narrow and steeply sloped on the back,” he explains, “which necessitated the use of large-boulder retaining walls.” Bragg and his crew had to remove the existing weak soil structure and replace it with compacted structural fill to support both the house foundation and the retaining walls. The walls were a combination of large boulders from a quarry in Cumberland and smaller stones from a quarry in the China Lakes region. In addition, the concrete foundation had to be stepped to accommodate the four levels of the home.

Just as the interior gradually unfolds as you walk through the space, so does the exterior. Susan Carter of Gnome Landscapes, Design, Masonry, and Maintenance in Falmouth created outside terraces, entertaining areas, and recreation spaces on both street and water sides of the house that work in conjunction with the various levels of the home. Since the house is exposed to coastal elements, including intense winds and moisture, it was important to include energy-efficient systems and high-performance windows and exterior detailing. “We didn’t want the house to shake or leak,” says Sheehan, “which can be challenging here at Two Lights.” The team chose durable, low-maintenance materials for the exterior: local fieldstone; red-cedar roofing; copper flashing, gutters, and downspouts; white-cedar shingle siding; ipê decking and handrails; stainless-steel cables; and custom-designed board-and-batten siding. The mahogany front door and sidelights add yacht-like accents, and Davis selected lawn furnishings that extend the living space outdoors. On the deck, teak and cast-aluminum furniture encourage the family to have their meals and relax overlooking the ocean.

Sheehan feels fortunate to live where she lives, and to have a home that celebrates all the natural beauty around her. “I open the terrace doors to paradise, starting with sunrise and a sky filled with colors,” she says. “Then in the afternoon, there’s a breeze and the warmth of the sun. In the evening, I sneak out to hear the waves and look at the stars. It’s a different picture every day.”