The Landscape of Feeling 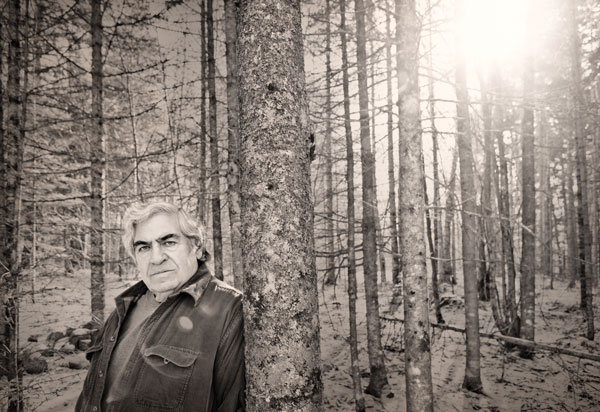 Paul Caponigro's primary endeavor has always been to explore his connection to nature. 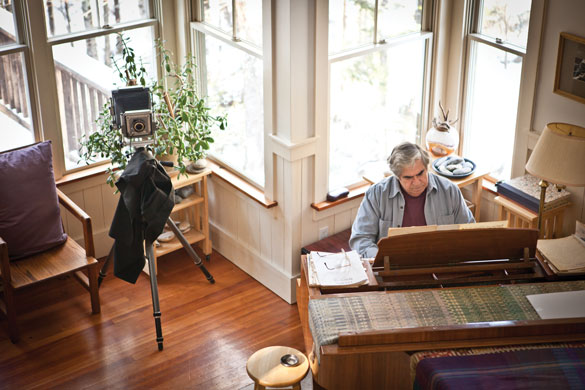 Paul Caponigro’s musical training gives the photographer a sense of composition and harmony. He’s been playing the piano for as long as he’s been taking photographs. Though never much of a student, Caponigro always got A’s in music class. During his one semester at Boston University’s School of Music, he introduced himself to piano teacher Alfredo Fondacaro and begged for lessons. Fondacaro became one of Caponigro’s greatest mentors. “Before he died he told me: ‘You know, there’s a great focus on the technicalities— the fingers, how they work. But, the music is made from here,’ and he passed his hand over his chest. That was the best lesson,” recalls Caponigro. 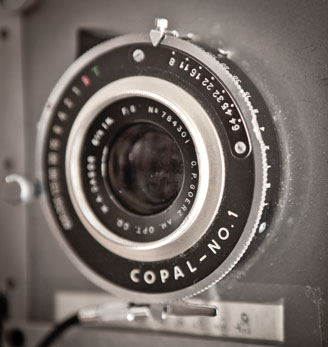 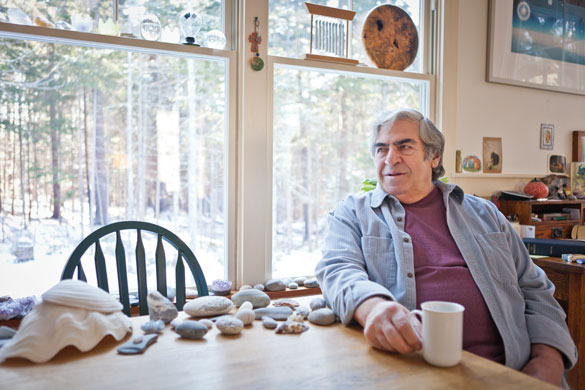 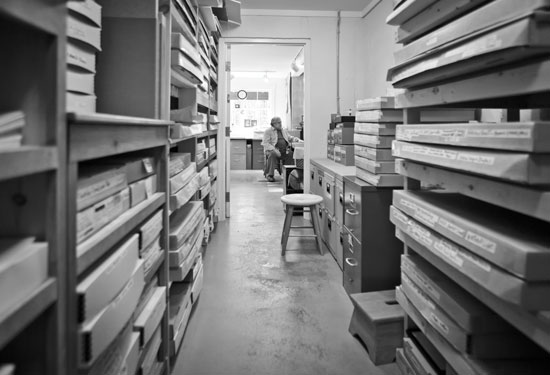 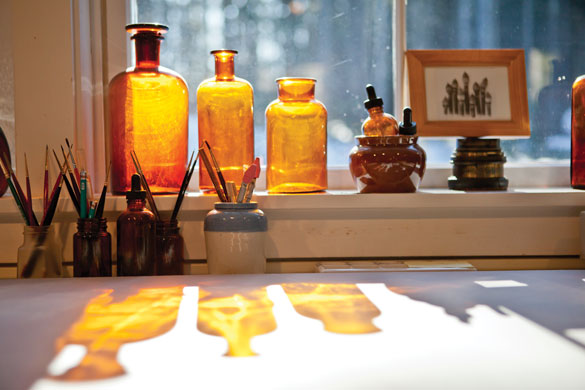 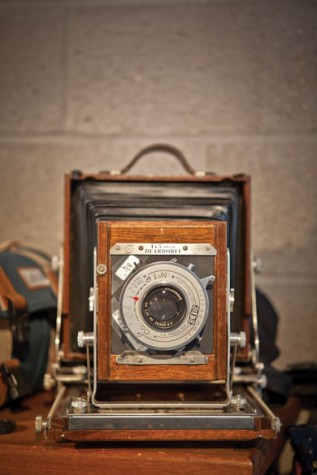 One of Caponigro’s most-used cameras, a Deardorff large-format view camera. 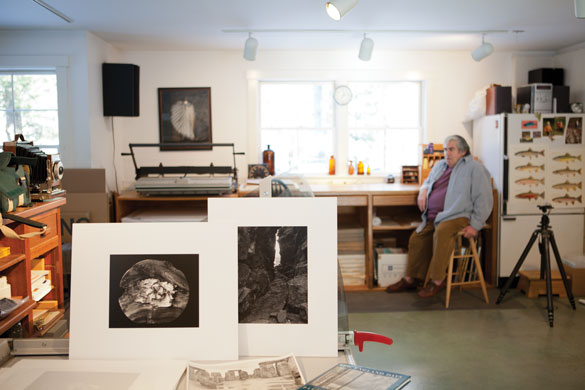 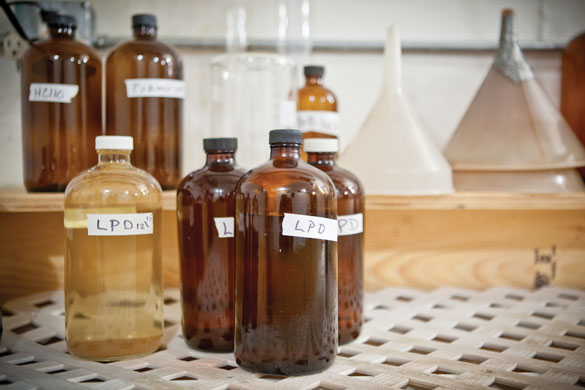 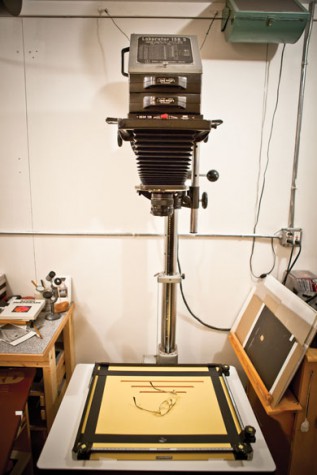 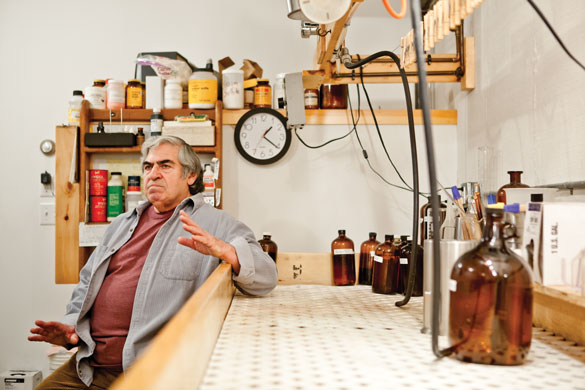 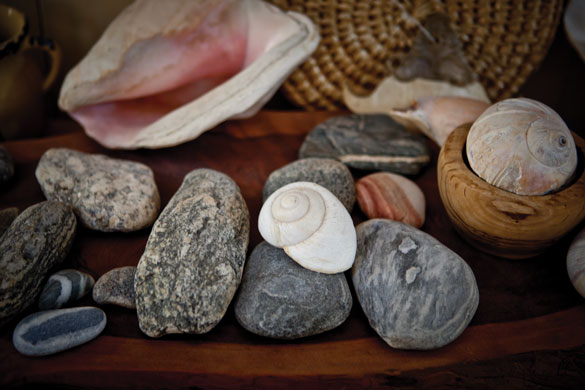 In his house in Cushing, Paul Caponigro is playing the piano. I let myself in because I don’t want him to stop. The sound is euphonious, blanketing, big feeling. Bigger than my knock at the door, bigger than his house, bigger than the surrounding woods. It sounds like snow falling. Or rather the sound is what falling snow looks like: soft, measured, enveloping. Beautiful.

Eventually he sees me.

The things I know about Caponigro: He’s one of the foremost landscape photographers of our time. He’s been playing the piano for as long as he’s been taking pictures. He summered in Maine his whole life and then moved here for good in the early 1990s. He met Ansel Adams at a party before he knew who Ansel Adams was. He has a son named John Paul who is a renowned digital photographer. The things I’m about to learn about Caponigro: He’s an incredible storyteller. He would choose Ireland over Italy any day. And he was born feeling connected to another world, some hidden presence. This last admission reveals itself gradually, unfolding in layers. And yet once I come to understand it, I realize it’s been right there in his photographs all along.

The snow falling outside goes without mention today, but years ago it would have been a meaningful cue. At the first sign of white, Caponigro would get into his car and drive from Maine all the way to the Pacific, stopping along the way to take photographs. It’s been a few years since he made this road trip. Illness and fatigue have kept him at home in Cushing, but the silver lining is obvious to anyone who’s been to the Farnsworth Art Museum recently. Caponigro was awarded the Farnsworth’s Maine in America Award in 2011, and his exhibition The Hidden Presence of Places was so successful that it stayed up three months after it was due to come down. The show was even nominated for a New England Art award by the New England Journal of Aesthetic Research.

At 79, Caponigro may not travel much in the literal sense these days, but his journey is far from over. “Now, my son is the teacher and the traveler,” he smiles. “When you get older, you don’t get out on the main highways anymore—instead, you make in-roads. You start looking inside.” Looking back on his life, Caponigro says he feels like he’s “done the work of four men—always intensely.”

Born in Boston, Caponigro got his first job as a printer in a photography house. In 1953, the army took him out West, where he became a photographer stationed at the Presidio in San Francisco. In the photo lab there, he met Benjamen Chinn, one of the first photography students of Ansel Adams and Minor White at the California School of Fine Arts. “He had this awfully good music coming out of the lab, so I would always hang out by his door,” recalls Caponigro. It wasn’t long before Chinn took Caponigro under his wing. “One day he told me we had to go to this party. He didn’t tell me where. We wound up at Ansel Adams’s house. I walked in and saw these incredible photographs on the wall and Benny started introducing me: ‘This is Ansel Adams. This is Minor White. This is Dorothea Lange.’”

A few years later, White invited Caponigro to come to Rochester, where he was teaching at the Rochester Institute of Technology and working as one of the curators at the George Eastman House. Caponigro stayed in White’s house for several months, where he enjoyed a nurturing creative environment amid a constant flow of students and professors. In 1958, he had his first solo exhibition at the Eastman House. A couple years later he became a consultant for Polaroid in the photography-research department. He also began teaching photography part-time at Boston University and, during the summers, at the Maine Photographic Workshops (now the Maine Media Workshops). After decades out West, Caponigro moved to Maine to live year-round. Today, his son’s family is just a short walk away through the woods.

Photographers talk a lot about seeing. Caponigro talks about feeling. While White and Adams were among the first to perfect the “zone system” in photography (a technique for pre-visualizing an image to determine the optimal film exposure and development), Caponigro found the process “too analytical.” For three months, he explored the technique, testing different developers, different films, different papers. But the two-dimensional system was still more formulaic than he liked. “Too much from the brain and not enough from the heart,” he says. “Then one day I was standing there,” he recalls, “looking at the work, and boom—a third dimension hit me: emotion.” Caponigro’s realization: if he could put feeling into an image, it would become more than just a group of black-and-white tones organized within a frame.

“I realized I had to be in a state of love at all times,” he says. “That whatever my eye fell on, I had to be the lover that communes with whatever is out there. I even had to learn to love traffic. So now my eye is always roving and I am lovingly drinking in what’s there.”

These days, Caponigro is busy with his next big project—a 2013 show at the Yale Center for British Art. The exhibition will celebrate his extensive body of work in the British Isles, predominately photographs of prehistoric stones in Ireland and England, including Stonehenge. The subject matter has transfixed Caponigro since the 1960s, when he won a Guggenheim Fellowship and moved his family to Ireland in pursuit of photographing “things that were ancient.” The experience, the beauty of the landscapes, and the “feminine energy” of Ireland changed his life. He became intrigued by Celtic mythology, fairy tales, and prehistoric stones, which he says have an incredible power and energy that can “eat you alive.” The energy of those places spoke to him. “It was like sticking my finger in a socket. I learned that those stones breathe. The earth breathes. It takes power in and gives it out, just like we do. I was hooked.”
Caponigro’s deep-rooted connection to nature comes from a place even he is still exploring. “I came into the world with something in me, a strange presence that has followed me throughout my life. I’ve always known it, and it’s what gave me the ability—even as a child—to stand back from all the activity, even though I was in it. I held on to it just like I held on to my innocence. If there’s anything that has to be kept alive, it’s the awe that this exists. And I exist in the middle of it all.”