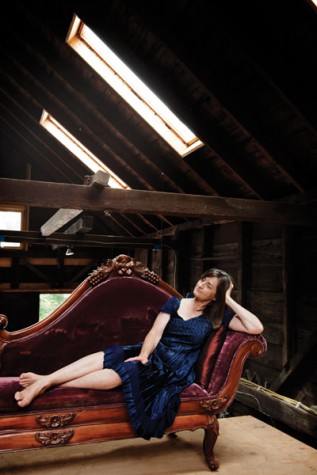 An odalisque: Roberge reclines on a sofa stored in the loft of her barn in South Portland. The mahogany sofa upholstered in red velvet was used in the sculpture Long Red Stack exhibited outdoors at the DeCordova Museum and Sculpture Garden in Lincoln, Massachusetts, from 2006 to 2008 and in Boca Raton, Florida, in the exhibition South X East in 2005. 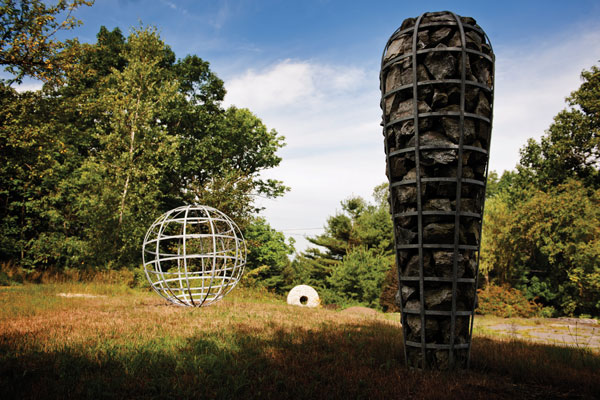 Tall Cairn, Red Slate Cairn, both 2004, and Pi Disc, 1989, installed in the side yard of the artist’s studio in South Portland. Tall Cairn includes stone retrieved from a sculpture project at Jackson Laboratories in Bar Harbor. Red Slate Cairn will be filled with slate from Sheldon Slate in Granville, New York. Pi Disc, made of cement and granite, was shown in Roberge’s solo exhibition at the Portland Museum of Art in 1989. 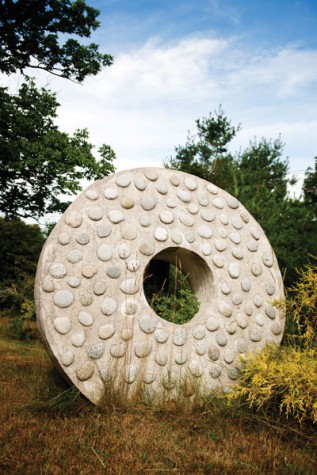 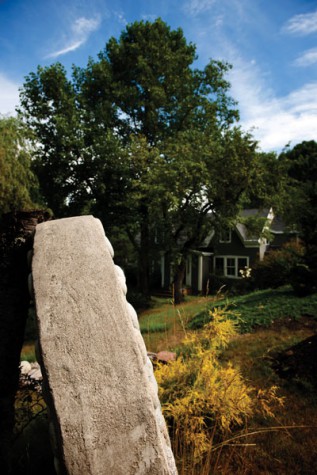 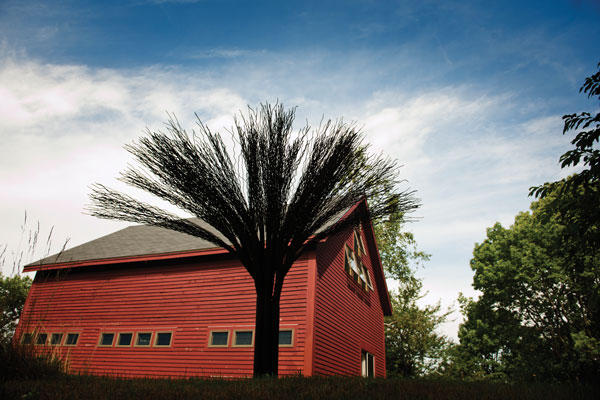 View of back of Roberge’s barn through Daphne, a welded steel sculpture from 1983. 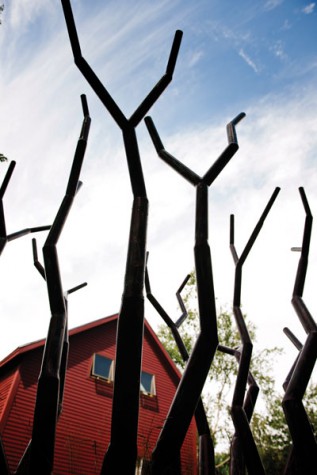 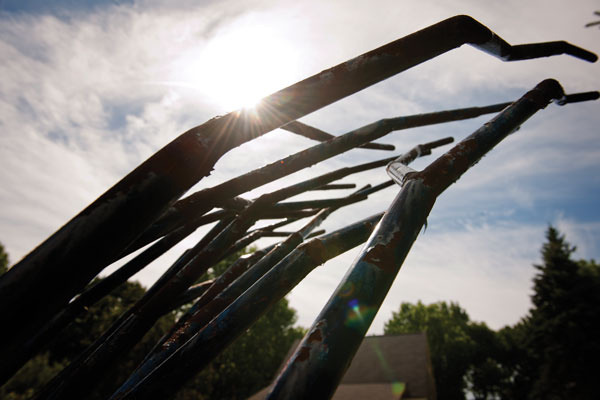 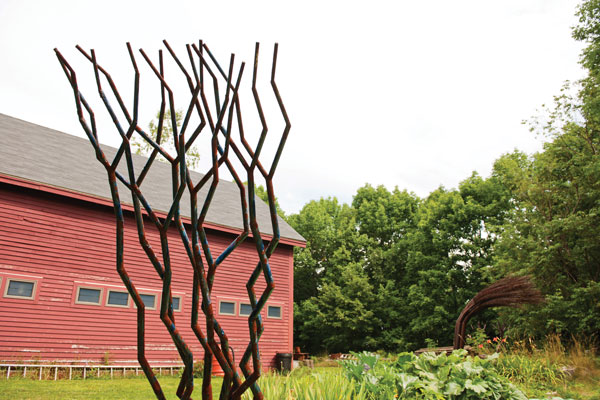 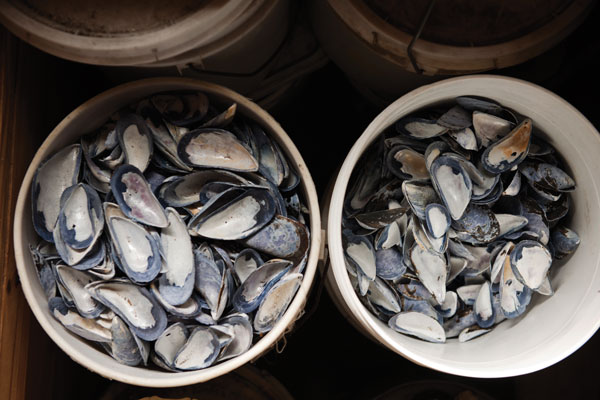 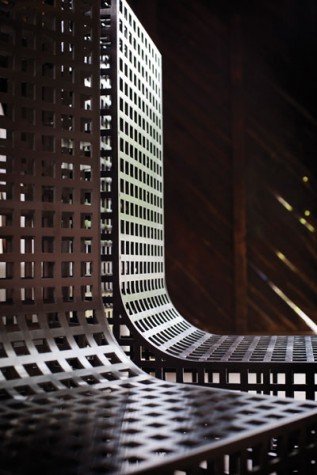 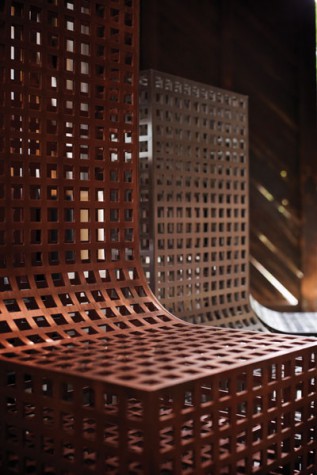 Details of Chairs for Mining which was included in the 2010 Biennial Juried Exhibition at the Center for Maine Contemporary Art. 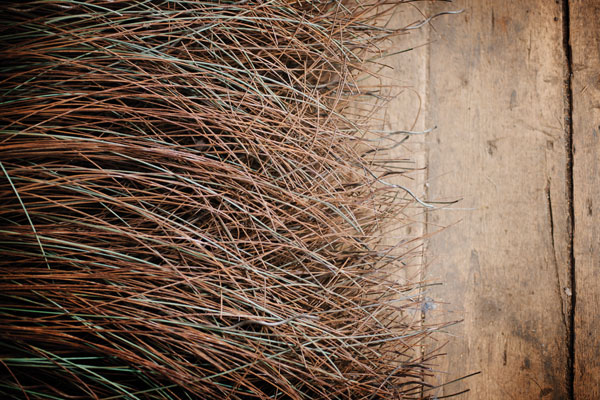 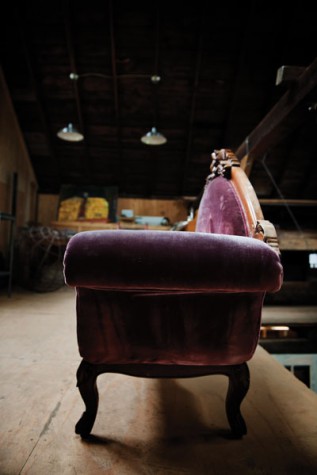 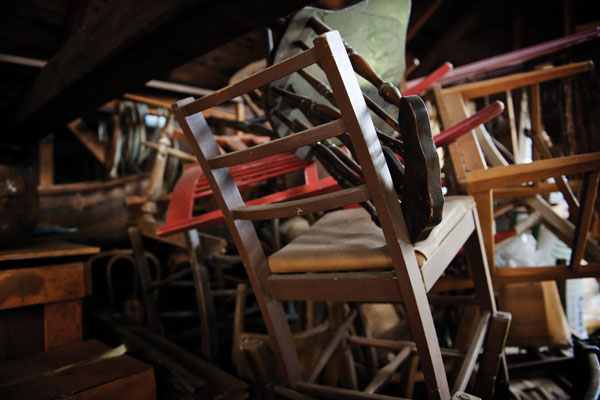 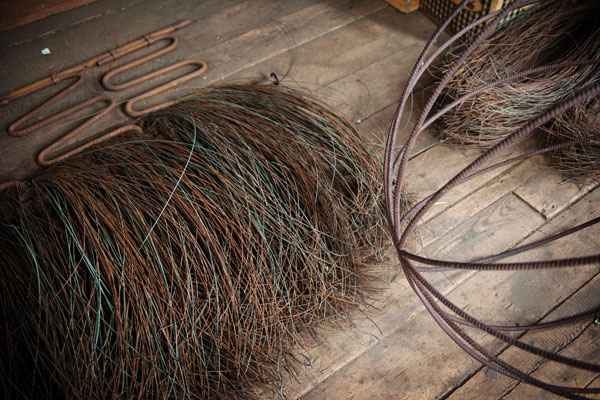 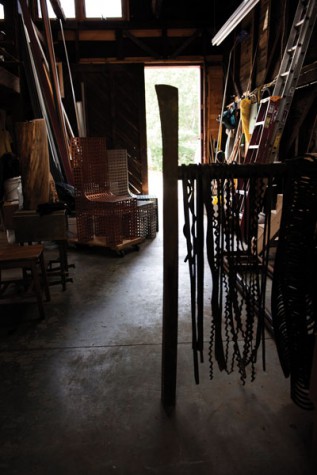 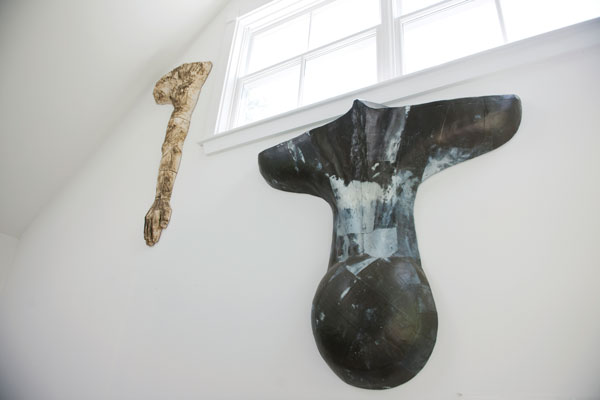 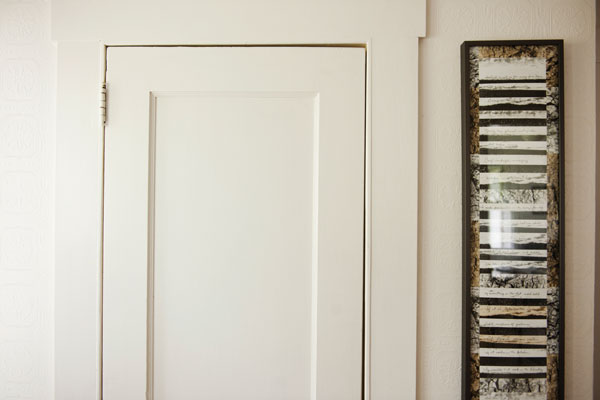 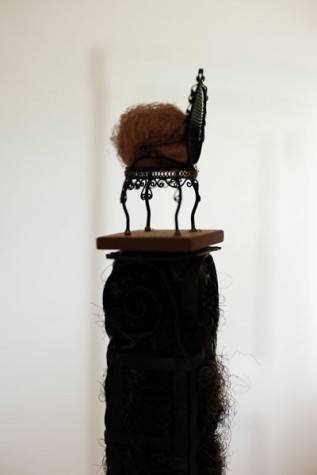 Detail of Chair Stack (for Antoni Tàpies), 2010, installed in South Portland. The sculpture is made of materials retrieved during the renovation of the artist’s house in Gainesville, where she lives during the academic year while teaching at the University of Florida. The metal came from the screen doors, the cedar wood from the ceiling joists, and the horsehair from dining room chairs. The miniature metal chair was found in Barcelona in 2006. 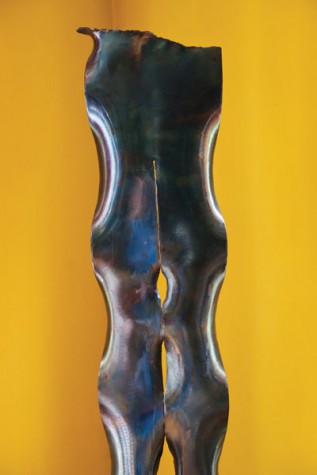 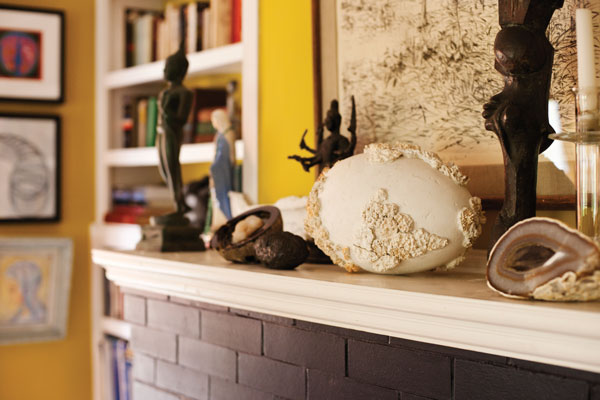 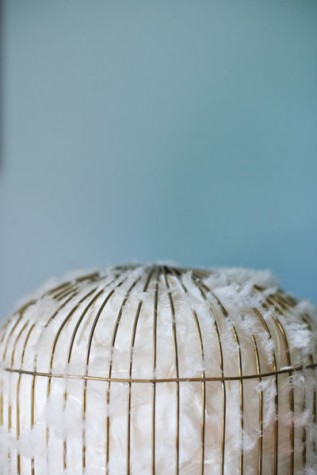 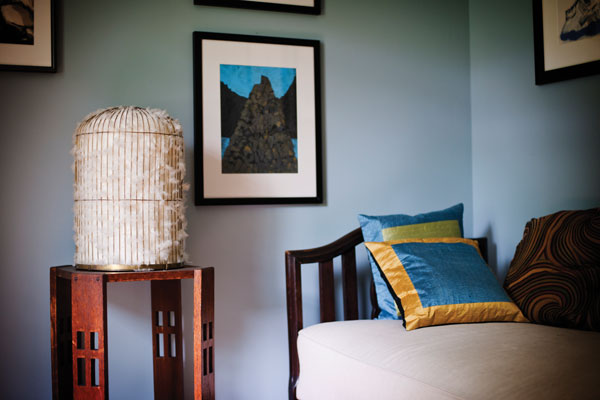 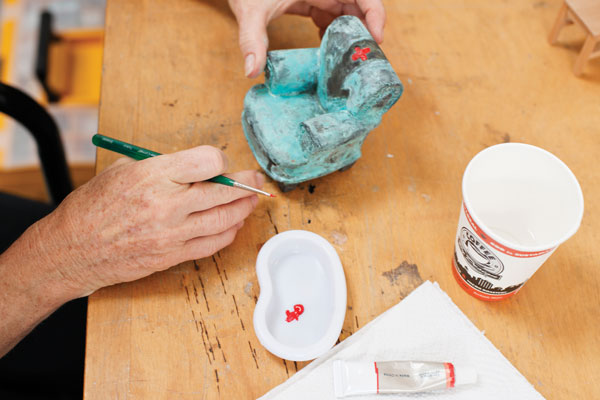 Roberge working on the patina of a miniature bronze chair to prepare for a larger sculpture. The chair is based on one the artist saw at the Fundació Antoni Tàpies in Barcelona, Spain, in 2006. 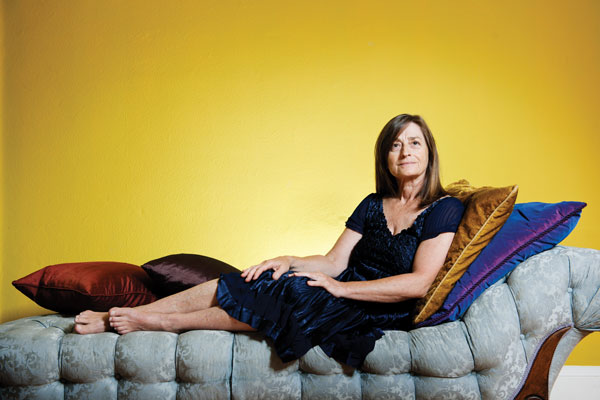 A SCULPTOR AT LARGE. WORKING WITH THE “STUFF OF THE EARTH,” THIS ARTIST-TEACHER CREATES OBJECTS THAT AMAZE AND PROVOKE


The concepts for her sculpture, Celeste Roberge explains, “begin with seeing something in the world—like a rock, a sofa, a quarry, a type of seaweed, a piece of rusted metal—where the presence of matter and materiality is dominant.” From there, the process becomes wonderfully obsessive and often transformational.
Take Roberge’s granite sofa. This remarkable object of leisure, paradoxically made of stone, was inspired by a Grecian sofa attributed to famed neoclassicist architect and woodcarver Samuel McIntire (1757–1811). The sculptor came across a photograph of the sofa in November 2008 while doing research on chaise longues, daybeds, and related furnishings at the American Antiquarian Society in Worcester, Massachusetts.
After obtaining permission from the Winterthur Museum in Delaware to reproduce the sofa in granite, Roberge was on her way. A trip to downeast Maine in search of granite led to her to Russ Kaufman of Milbridge, the man who ultimately carved the stone. The granite was eventually found in Ontario.
Fast-forward to June 2010: workmen carefully off-load the finished sculpture into the foyer of the Farnsworth Art Museum. There the sofa has intrigued—and no doubt startled—many a visitor. The sculpture took two and half years from conception to delivery.
When asked about her favorite materials, Roberge admits that she has penchant for the raw and untamed—“what I call matter, the stuff of the earth, things like rock and minerals and ores,” she says. The artist is part geologist and has an intense appreciation for natural processes, including the results of eruption, crystallization, and erosion. She is kin to poet Abbie Huston Evans, who once wished to “darkly partake of the being of first rock.”
The artist has sought out her subject matter in different parts of the world, most notably Iceland, which she has visited on three occasions and which she considers to be one of “the most interesting land formations on the planet.” On her last trip there, in 2007, she stayed at one of the SIM (Samband Íslenskra Myndlistarmanna) artist residency studios, where she produced a series of twenty drawings titled What I Saw on the Glacier. Five of the drawings were inspired by flying over a glacier near Skaftafell National Park.
When she isn’t conceiving new work, Roberge is teaching the fall and spring semesters at the School of Art and Art History at the University of Florida in Gainesville (she is head of the sculpture department). “Teaching is action,” she says, and the studio is like a laboratory, a place of “inquiry and experimentation.”
Roberge taught her first students when she was a tutor in the Upward Bound program at Bowdoin College in 1974. She has done stints at the Maine College of Art, the Nova Scotia College of Art and Design, and Cape Elizabeth High School. Since taking the Florida position in 1993, she has moved from assistant to associate to full professor.
“I think I am a better person for having taught,” Roberge says. “I am definitely more patient.” As much as she loves teaching, she plans to retire soon and move back to Maine (she was born in Biddeford). Given the physical demands of sculpture, she feels it is imperative that she return to full-time art making as soon as possible.
The artist already has a place to live and work: a house and barn off Highland Avenue in South Portland. Purchased in the late 1990s, the place suits her “conflicting” needs—“to be in the city, yet have enough privacy to make a mess and lots of noise without bothering the neighbors.” The residence also satisfies her particular sculptural sensibility: the lot slopes down to the avenue following, as Roberge explains, “the incline of the mother rock that lies just below the surface.” She adds, “There are stone escarpments scattered here and there.” Certainly, these are aspects of the property that her realtor may not have fully appreciated.
With the help of jack-of-all-trades Bob Ware, the barn, which was a wreck, is being restored. Roberge has contributed her share of sweat equity, including sanding and priming many thousands of feet of clapboard for the house and barn. She also does the landscaping, and her long-range vision is to create a sculpture garden and “integrated permaculture mini-farm.” She has planted peach and plum trees, a variety of berry bushes, and a tiny organic herb and vegetable garden.
The buildings and grounds provide a retrospective of Roberge’s work, and examples from most of her series are on display. An early piece, Ric Rac, is from a group of steel sculptures she began in 1979 while on a Bernard Langlais scholarship at the Skowhegan School of Painting and Sculpture. The piece was inspired by her mother, Mary Ellen Gleason Roberge, a virtuoso seamstress and doll maker who always had piles of fabric and trims, including ricrac, on hand for sewing to create all the clothes—for sports, school, and Sundays—worn by her nine children.
Roberge is currently working on a combination pear-wood carving and steel fabrication that she describes as a “hybrid tower/stack/mountain.” The wood came from a dead pear tree she cut down in her South Portland yard, and the steel section consists of small chairs piled up like those presently stacked in the loft of her barn.
The sculptor is also exploring the possibilities of seaweed, which she collected in Nova Scotia last summer during a Baie Sainte-Marie Artist and Family Residency at the Jenny Family Compound in New Edinburgh. She is working on drawings, sculpture, and photography using the seaweed as both raw material and subject matter. “It’s vague for now,” Roberge reports, but as anyone familiar with her work knows, the results are bound to fascinate.