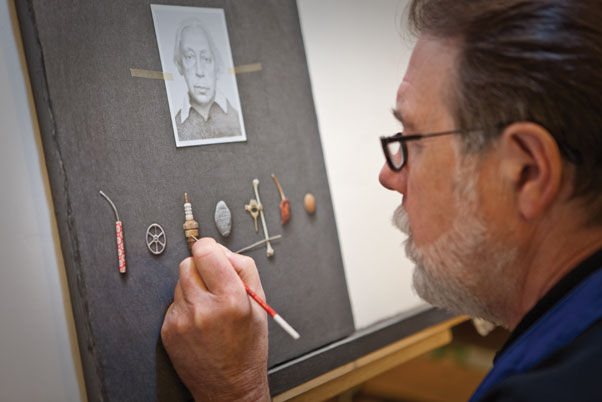 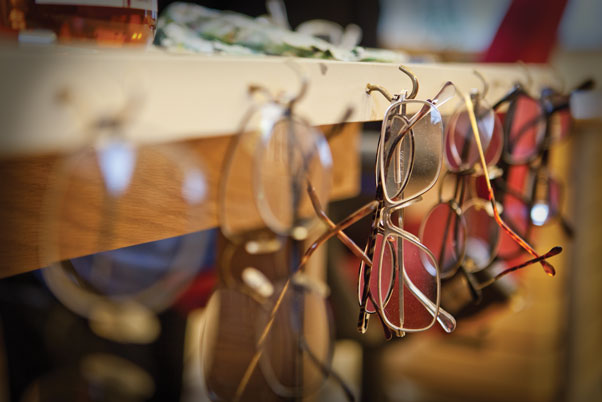 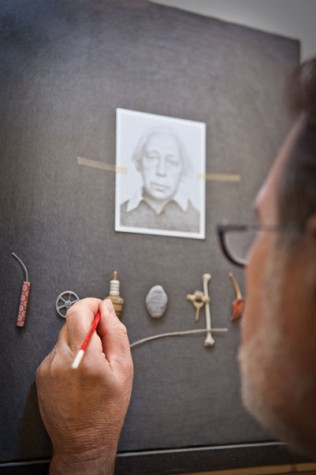 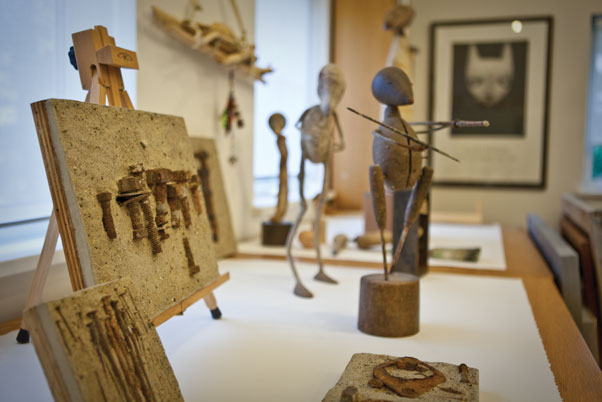 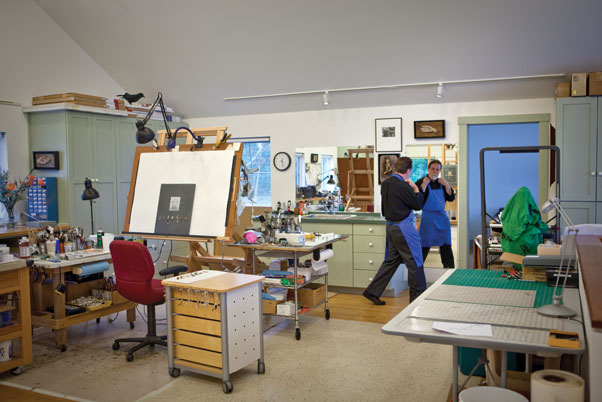 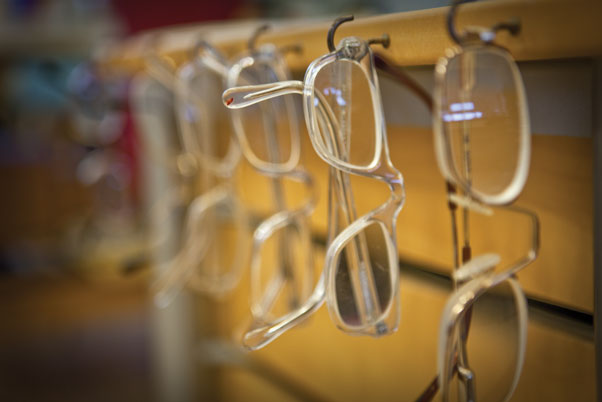 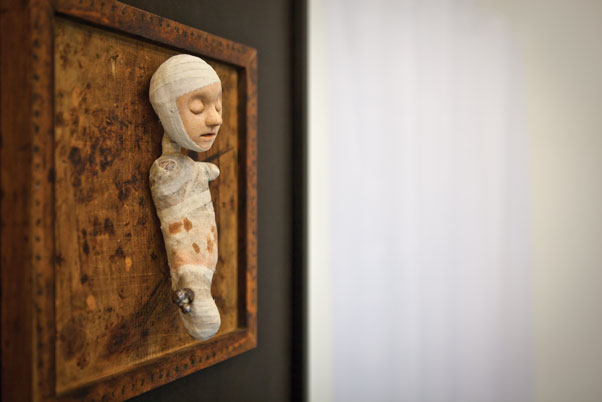 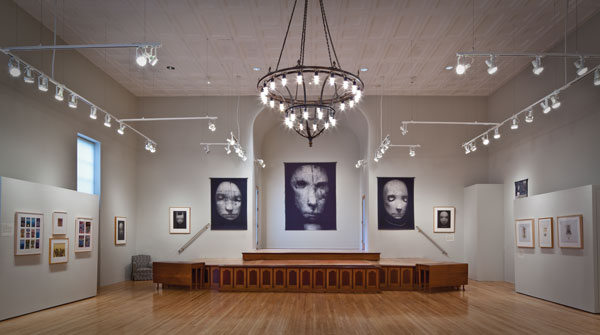 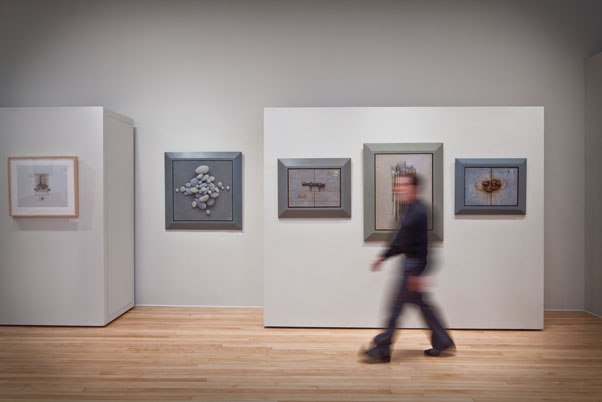 Artist Alan Magee walks through an installation of his work at Pascal Hall in Rockport. 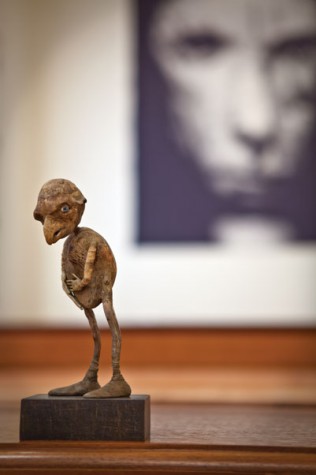 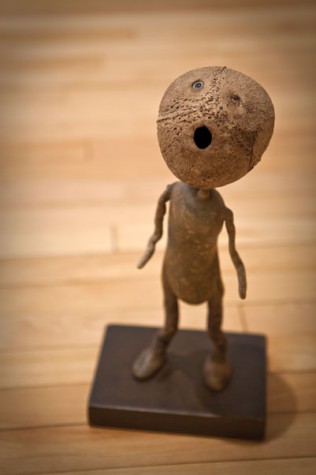 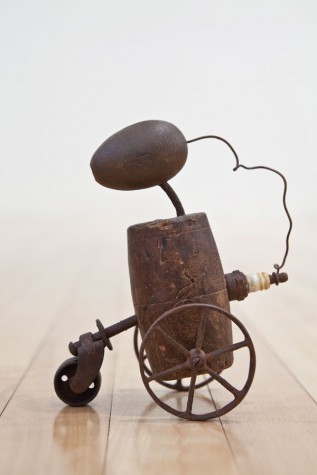 The REAL and the TRUE. Alan Magee’s penchant for close observation extends beyond surfaces to human society

Alan Magee is best known for his ultra-realistic paintings, watercolors, and tapestries that depict beach stones, paper ephemera, and heavily used tools and paintbrushes. His close attention to the surfaces of these objects is fascinating to observe in his artworks, which have gained him wide recognition and secured him a highly regarded place in the pantheon of realist a
rtists. Yet this body of work represents only a fraction of Magee’s range of expression.
Born in Pennsylvania in 1947, Magee gave up a successful career as an illustrator in the late 1970s to devote himself exclusively to his own painting. He and his wife, Monika, first moved to Camden in 1976 and then, three years later, to Cushing, where the couple continues to live today. Their decision to relocate in Maine was motivated by a desire for a grounded, small-town lifestyle. What they found on the midcoast were “people who seemed to have a good sense about what makes society work,” which includes, of course, a respect for art and culture.
In Pennsylvania, the Magees frequently attended Friends meetings, and the tenets of Quakerism have greatly enriched their life philosophies. While the artist considers his views to be more ethical than political, he is deeply troubled by many elements of our current society. “We live in a state of confusion,” he says. “Our nation’s priorities are misplaced. We have to foster alternatives to war. This could begin by looking at our history—at how we arrived at this apparent impasse. For those not profiting from it, war is enormously wasteful; we could be attending to public health care, or to the many problems resulting from poverty and inadequate education.” At the moment, Magee is reading Stephen Kinzer, Chalmers Johnson, and Chris Hedges—deeply skeptical authors who are often critical of the American political landscape. For Magee, ignorance and indifference are destructive. “Each of us has a way of addressing this,” he says. For him, it is his art.
For their “witnessing of history,” Magee admires several European artists who worked between the two World Wars, including Hannah Höch (1889–1978) and Käthe Kollwitz (1867–1945). Kollwitz made the urban poor and underprivileged the subjects of her prints and sculptures, and in three recent paintings Magee pays homage to her and two other Germans who resisted fascism: Ernst Friedrich and Dietrich Bonhoeffer. For the most part, Magee’s less well-known drawings, monotypes, collages, paintings, and sculptures focus not on world history but on the human condition. These works portray the human figure in severe emotional pain seemingly caused by spiritual angst or the anguish of injustice.
In a series of black-and-white monotypes, arresting faces stare out at us defenseless and silenced by all-consuming suffering. They are unsettling to look at. Small humanoid sculptures are exquisitely made out of found objects and sculpting material, and they seem sentient and very much alive. Grievance is one such sculpture that, according to Magee, portrays “a constant disgruntlement with the world.” Depending on the angle of viewing, the creature either seems s
ad and vulnerable, touching its body below the heart, or glancing back vengefully at the viewer. The expressiveness of Magee’s figures is very complex, oscillating between the grotesque and the humorous. They are all victims, but they are menacing at the same time, and Magee finds it hard to part with them. “Maybe I need to learn from them,” he muses.
On first glance, this darker work appears to have nothing in common with Magee’s realist art. Yet both creative forms are based on close observation and a deep appreciation of the marks that time and man have left on the world. Beach stones have been ground down by eons of erosion, tools show the wear of man’s labor, envelopes are scored with creases and old-fashioned handwriting, and the figurative work depicts the emotional scars that humans leave on one another. Life has weight, and experience leaves its marks—all of it is present in Magee’s oeuvre.
For Magee, another theme that can be traced throughout his work is his “antipathy to violence”—a deeply humanistic concern—and that is where he sees realism and representational art in general playing an important role. “The range of human emotions remains constant, and representational art continues to be important to express those enduring realities,” he says. For that reason, accessibility is paramount in his art.
Magee’s work continues to evolve. For the very first time in his career, his most recent show at Forum Gallery in New York City last fall included some of his darker work. He also started a new series that is embedding timeworn objects in wall reliefs that resemble archeological finds. Ultimately, Magee hopes to arrive at what he calls “a workable conclusion” to his work that deals with war and violence. Despite the unbearable horror they experience, his protagonists have all moved through the pain and emerged as witnesses and survivors, which conveys a hopeful message for us all. Magee is not at all a doomsday prophet—in fact, he has a deliciously dark sense of humor that sneaks out in witty remarks and, of course, in his work. Magee’s confidence and uprightness extends outward from his worldview and into his work—he is all poise and of one piece.