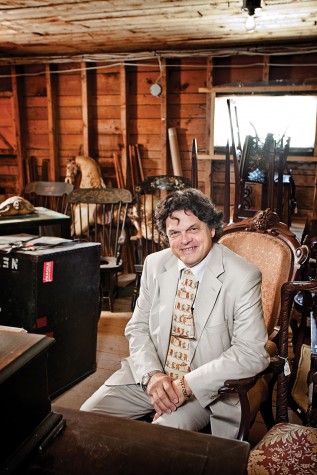 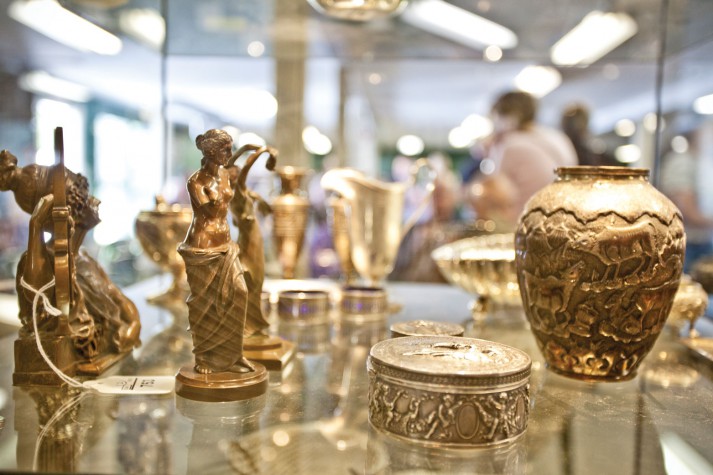 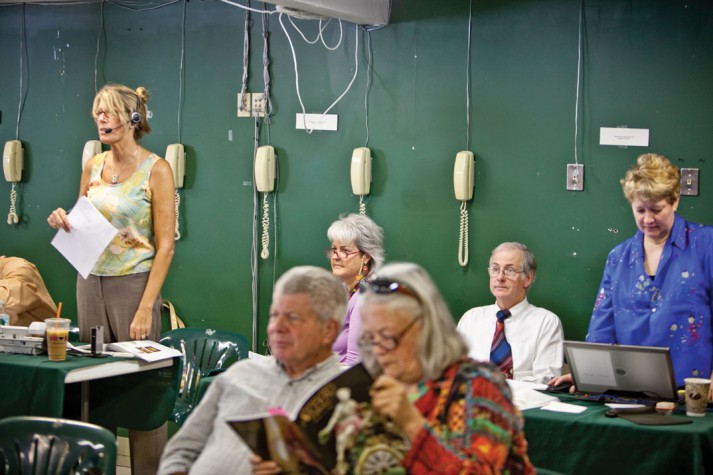 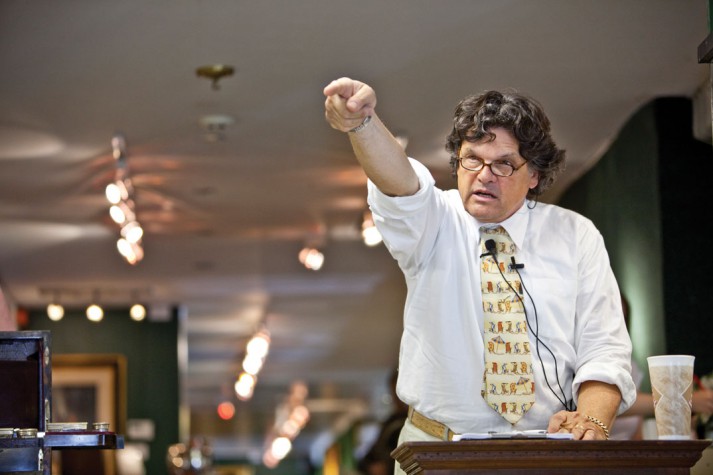 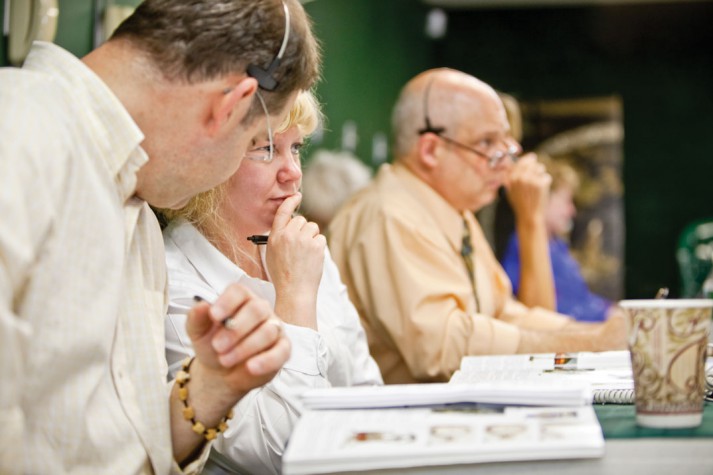 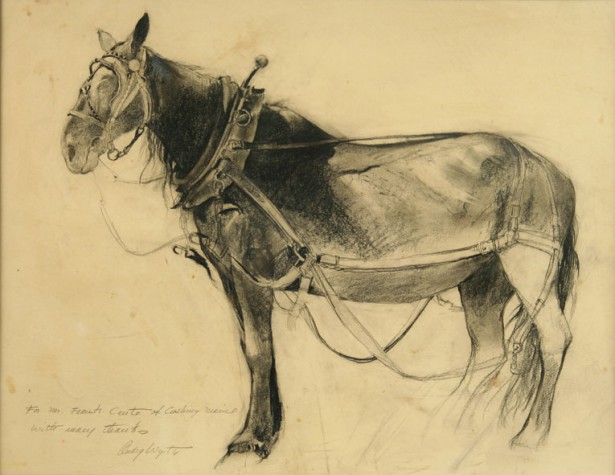 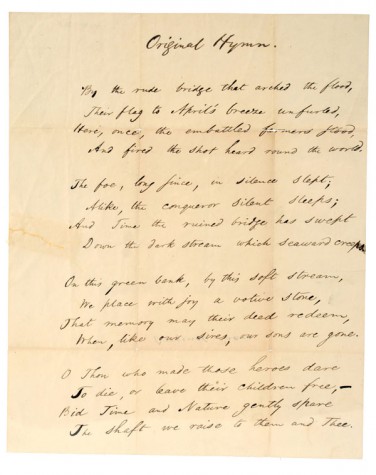 An auctioneer with a photographic memory and an obsession with preservation

On a muggy morning at the end of May, the sheer volume of people and antiques inside Thomaston Place Auction Galleries makes the building, a former chicken coop, feel like it could bust its seams. Just before the auction starts, Kaja Veilleux—owner, appraiser, auctioneer, and founder—is walking around distributing handshakes and promises of a great show. “Going to be some fireworks here today, I tell ya,” he says with a wink. In the heavy air, the smell of antiquities and an excited energy mingle as people start taking their seats.

A few weeks ago, in his colleague’s office above the gallery (his own was too cluttered), Veilleux revealed how he got into this field as a boy. As he cleared off a chair—under the watch of a Bellamy eagle, an antique bust, and countless old paintings—he smiled and admitted, “As you can see, this business is really about ‘stuff.’” In this small office alone, there is enough “stuff” to fill an attic.

For fifteen years, Thomaston Place Auction Galleries has been a roadside institution along Route 1. The list of items it handles is all-encompassing: fine art, furniture, porcelain, pottery, oriental rugs, mirrors, books, currency, folk art, antique toys, jewelry, quilts, sculpture, boats, cars, firearms, ephemera, and more. Among the rows and rows of heirlooms that fill every square inch of gallery space, Veilleux couldn’t be more at home. The 58-year-old Waterville native began collecting at the age of 8 and has attended thousands of auctions in his lifetime. “My father was in the grocery-store business with my grandfather, and on weekends and nights we’d go to house sales and auctions. Both my parents loved to buy and sell things,” he says. Veilleux himself started with iron penny banks and cast-iron toys, and by 15 years old he was buying paintings—now one of his major areas of expertise.

As much as Veilleux is in the business of buying and selling things, his true passion lies in preserving the past. “So many times we are the key force behind saving some of these magnificent rare historic treasures. If it wasn’t for our enthusiasm and expertise, these things would be thrown away,” he says. “I’m really an urban archaeologist with an antiquarian background. I support the preservation of antiques and fine art for future generations.”

Veilleux’s obsession for objects of the past is aided by his mind-boggling, almost unbelievable photographic recall. “I’m horrible with words, but great with objects,” he says. “I can go into your house and twenty years later remember exactly what you had and what it looked like.” As he recounts story after story about object after object and the intricacies of each, it becomes clear he is not exaggerating. That photographic recall comes in handy on auction day when Veilleux spouts out the details of 500 items by memory: provenance, whether there are any imperfections that need fixing, how the item came to him, and so on. “People are amazed, but I’ve always had the ability for one-hundred-percent photographic recall,” he says.

While the auction sale is a major event (a dramatic culmination of weeks of planning, work, and buildup), every day at Thomaston Place brings a new surprise, particularly on Free Appraisal Day, which Veilleux created long before PBS’s Antiques Roadshow started airing. Every Tuesday, people bring their heirlooms and precious possessions to the gallery for a free valuation. Depending on the need, Veilleux also arranges house calls—even as far as Mexico and Canada—for in-home appraisals.

One of Veilleux’s most memorable Free Appraisal Day moments came when a woman from Vermont mailed a painting in with a note that said, “Please take a look at this.” On opening the package, to his shock and surprise (followed by an expletive or two), Veilleux was dazzled by a rare Joseph DeCamp painting that he estimated to be worth about $50,000 or $60,000. “I called the woman and she told me she found the painting in her grandmother’s attic. She was hoping to redo her kitchen. I told her, ‘You’ll be able to redo a lot more than your kitchen!’” As soon as word got out about the painting’s inclusion in the upcoming auction, interest mounted, and before long Veilleux had to arrange extra cell phones to accommodate the growing number of phone bidders. On auction day, the woman who had found the painting sat in the audience, holding her breath as the price kept rising. “As I held it up, I was watching her. I thought, ‘I better sell this soon before she runs out of air,’ and forty seconds later it was over,” Veilleux recalls. To their shock, the painting sold for a world-record price of $605,000. “Just the fact that we can bring such joy to families with our expertise is a real rewarding thing,” he says.

On this particular auction day in May, time passes by in frenetic forty-second increments. A mix of curious onlookers, bargain shoppers, discerning designers, interested curators, and antiques experts sit in rows of plastic chairs to watch items, one by one, go up for bidding. The telephone banks at the back of the gallery are ringing with calls from connoisseurs all over the world phoning in their offers. Like a good play, there is performance and drama and the electric buzz a social gathering.

Veilleux, with his sleeves rolled up, is the man of the hour (or the next six, at least) holding the audience members captive. His performance is a careful blend of enthusiastic intonation, consummate knowledge, and a dash of humor. Occasionally, he goads with one-liners such as “You must be sleeping!” or “That’s no money for this,” bringing anyone who might have wandered into a daydream back to life. Behind him, a line of fast-moving auction staff ensures the constant flow of 500 lots—some quite heavy—to the podium: among them a copper circa-1900 weathervane, a pair of American cast-iron whippet sculptures, a painting by Mary Stuard Townsend Mason, a highboy from direct descent of John Adams, a drawing by Andrew Wyeth, and Ralph Waldo Emerson’s personal copy of one of his poems—and it’s only the first day of the sale.

Hour by hour, item by item, Veilleux saves antiques from their death or disposal in perhaps one of the most intriguing exchanges of goods from one owner to another. As he revels in the excitement, the moment, it is easy to imagine him as a young boy engrossed in the auctioneer’s call and his iron piggy banks, committing the entire scene to memory. After all, he says, “The auction universe is all-engulfing. When you’re in it, there’s nothing else.”