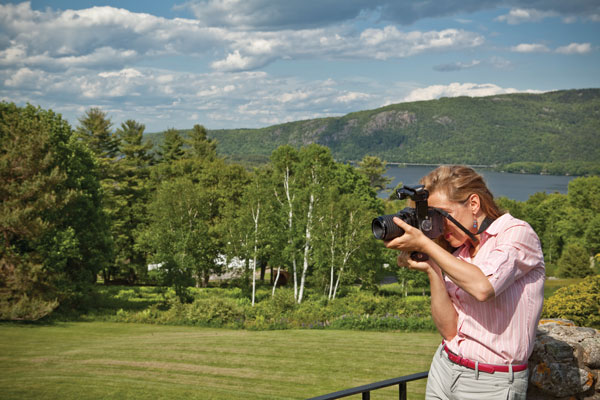 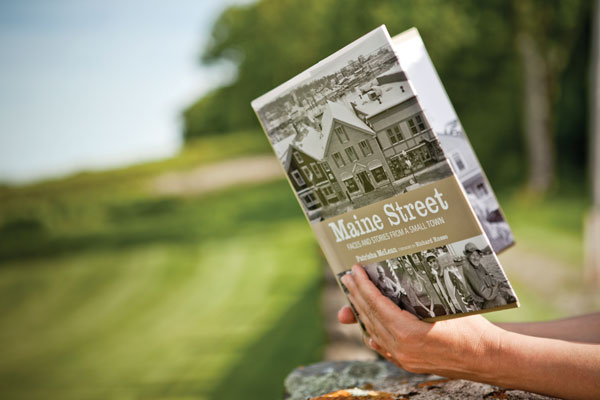 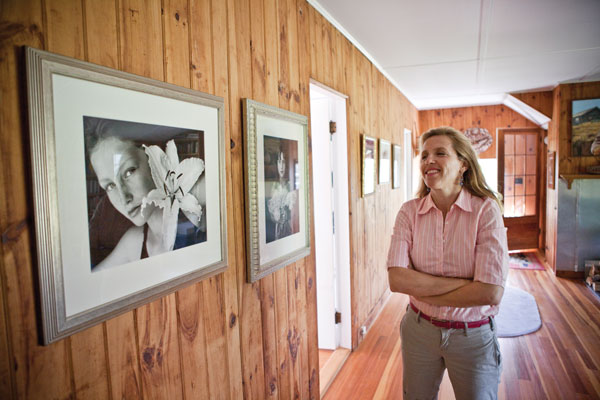 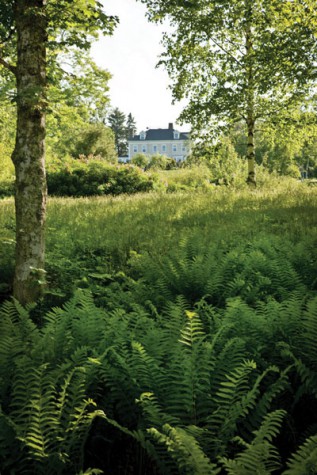 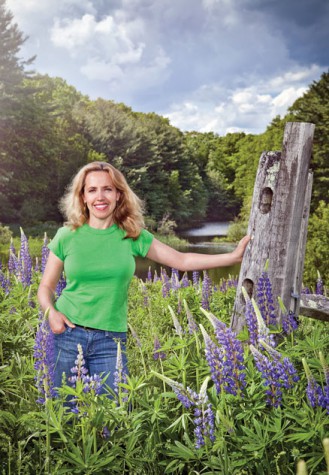 Photographer Patrisha McLean is sitting on top of the world—at least it seems that way from the vantage point of her hilltop home on the outskirts of Camden. Lakeview, the gracious Georgian-style house that McLean shares with her husband, the singer and songwriter Don McLean, and their two teenage children, Jackie and Wyatt, is located on two hundred private acres overlooking Megunticook Lake. The home’s lofty perch offers sweeping views of Camden Hills State Park, and the protected park land ensures that their pristine panoramic vista will never be sullied by development.

As stunning as the view is, it is the grounds surrounding the house that command attention during the summer months when McLean’s twelve gardens are in full bloom. Heritage roses are her passion, and hundreds of them are scattered around the property, anchoring each of the planting areas. “Every garden has roses in it,” she says, “even the vegetable garden.”

When the McLeans purchased Lakeview more than eighteen years ago there were no gardens on the property, only a single lone rose bush known fondly as “the mystery rose” because it still hasn’t been identified. Today “the mystery rose” is the centerpiece of the terrace garden located in a sunny spot adjacent to the house’s front entrance—one of the first areas the McLeans planted.

Planning the gardens each year is a collaboration between husband and wife—Don selects the site and Patrisha chooses the plants. “Don’s part in the gardens is deciding where each of them will be,” says Patrisha, “He has a great eye for design and decorated our home.” Patrisha, though, was the one who initiated the gardening fervor and the focus on heirloom roses.

Her first planting efforts were not a success. “I’m a city kid. I had grown up in Montreal and lived in San Francisco. I didn’t know anything about flowers, anything at all,” she says. “The first thing I planted was modern roses, and they didn’t make it through the winter.”

After this initial disappointment, McLean “did a lot of research” and found out that old roses are much better suited to the Maine climate. They are also more resistant to pests and fungus—an important factor, she says, “as we are all organic up here; we never spray.”

The gardens feature prominently in McLean’s photography. She is a noted photographer of commissioned children’s portraits, as well as her own documentary and fine art work. One of her signature series is Flower Girls, an ongoing collection of images pairing flowers from the gardens with young girls between the ages of 7 and 12. The photographs capture the beauty of the girls and the blossoms that McLean carefully selects to complement each young model.

The series started about ten years ago when McLean began photographing her own daughter and her daughter’s circle of friends. “I don’t think I’ve ever taken a photograph without people in it,” McLean says. “I appreciate the work of other photographers who do, but I’m just not compelled to do it. So the Flower Girls was a way for me to photograph the flowers that I love, capturing their fleeting beauty along with the fleeting innocent beauty of the young girls.”

As the series continued, McLean began to plant varieties of flowers with her photographs in mind. “Flowers I choose specifically for my Flower Girls project are a particular double Asiatic lily with a frilled interior, lots of different Shasta daisies because I like a variety of them in my photos, including the unusually shaped Thomas Killem and Crazy Daisy, plus very full roses, and roses with dramatic shapes such as Charles de Mille, which looks like a cabbage sliced in half. In general the flowers that work best are the larger varieties.”

Over the past few years, after the last blooms in the gardens have faded, McLean has turned her attention to another project: photographing and interviewing people in the community of Camden. Originally produced as a weekly column for the Camden Herald newspaper, selections from this new body of work were collected in Maine Street: Faces and Stories from a Small Town. The book features seventy profiles of “people who wouldn’t normally have their story in the newspaper,” says McLean. “People you see in town, certainly recognize, but you don’t know their stories—the unheralded people in the community.”

Richard Russo, a friend and fellow Camden resident, contributed an introduction to the book. “He’s one of my favorite writers,” she says, “and no one writes better about small towns than Rick and this just happens to be the small town he lives in.”

McLean began her career as a newspaper reporter. When she found herself searching for a photography project to keep her busy during the winter months, she thought back to her reporting days, and the idea for Maine Street was born. “Once I was doing the column,” she says, “I would talk to a lot more people whenever I was in town, I was always looking for potential subjects.”

Some of the most fascinating stories came from the most reticent individuals. “Those who said, ‘You don’t want to do that, I don’t have anything interesting to say,’ often turned out to be the most eloquent.” Evelyn Richards, who refurbishes old dolls for poor children around the world, is one of McLean’s personal favorites. “She is very humble. She spent her life working in sardine canneries and textile mills, but the truly amazing thing about her is her rhododendron and azalea garden. It almost rivals Asticou [the renowned azalea garden on Mount Desert Island]; I’ve never seen anything like it, it’s majestic. Who would have known she created this extraordinary secret garden. She’s in her mid-eighties and she’s out there every day.”

Fortunately for us, McLean shares Evelyn Richards’s story and those of other memorable small-town neighbors in Maine Street. Her photographs remind us that beauty can be found everywhere, even if it is as fleeting as youth and flowers.