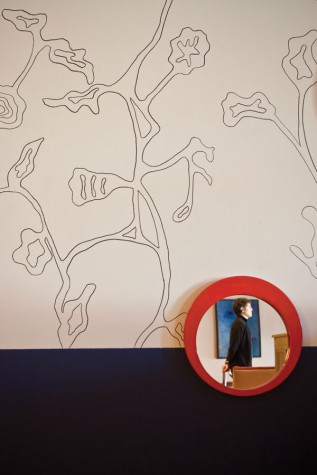 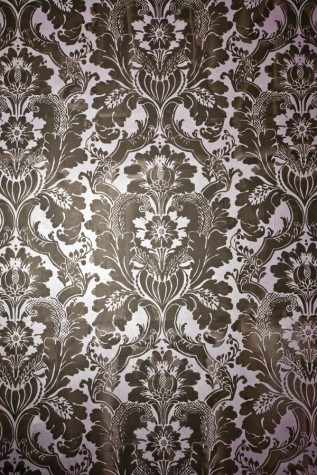 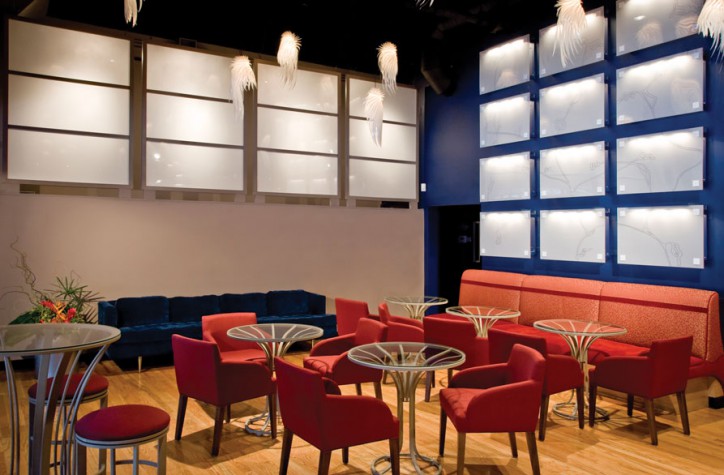 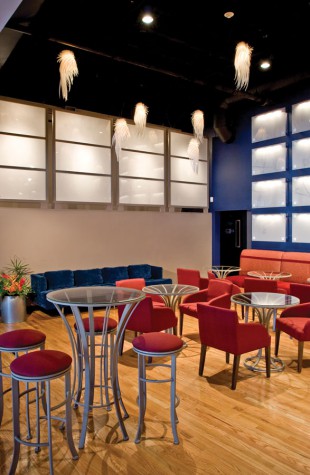 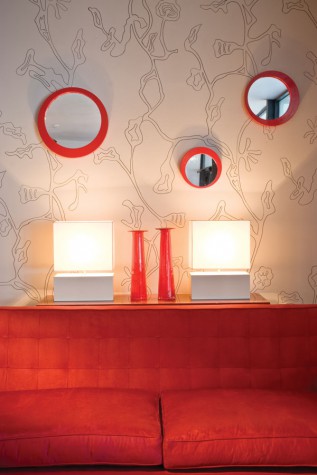 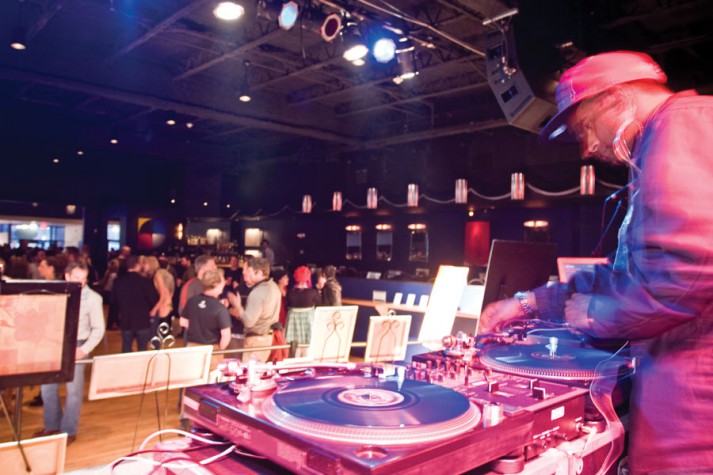 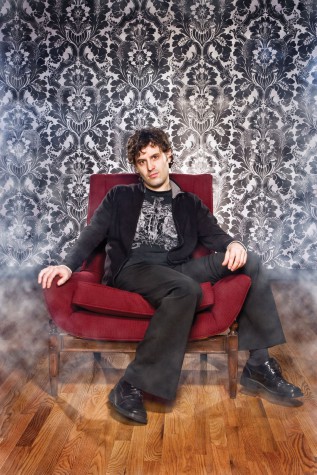 This is huge!” exclaims Joshua Bergey as he eyes the enormous steaming latte that has just been placed in front of him. At first, its size is daunting, but soon an eagerness to dig in takes over. It is the kind of reaction one might imagine the interior designer had when offered the job of designing the new 13,000-square-foot Port City Music Hall. Just a few blocks away from the Hall, though, there is little talk of intimidation from Bergey. Instead, the 34-year-old designer’s face is animated as he shares how working on Portland’s newest music venue was a full-circle journey for him, both artistically and physically.

To understand just how fitting it was for Bergey to design the interior of Port City Music Hall, one must first know a little about his background. Creating distinctive spaces has been the designer’s passion since he was a child playing with furniture and advising his parents on where to hang their newest painting. In Doylestown, Pennsylvania, a town known for its vibrant artistic community, Bergey was raised by a family of visual artists and designers. Though he never had the chance to meet him, Bergey’s major creative influence was his grandfather, Earle K. Bergey, an illustrator who was known for his work in the Saturday Evening Post, and for his pin-up art and science-fiction pulp covers. “I grew up in a house with nothing but white walls because there was always so much art,” explains Bergey, who was encouraged by his family, even when he was as young as 4 or 5 years old, to offer his ideas on furniture arrangement.

Such early artistic pursuits were later explored in art classes throughout his education. At Oberlin College, Bergey studied a range of interdisciplinary arts—music, writing, acting, and stage design—cultivating a variety of passions that would all deeply inform his later interior design work. “I view most of my studies and writing as something sculptural, something three dimensional,” he says. Bergey’s performing-arts background influences more than his design aesthetic, though—it also plays a role in the collaborative approach he takes with clients. “It is important that I become a chameleon and try to get a sense of someone’s spirit and personality and goals and dreams for a space,” he explains. “I am often the invisible artist…like the Pied Piper in a way. I observe and develop a space, and then I go away.” Bergey has the most fun when clients are unable to fully articulate exactly what they want, but trust him to design it.

In addition to commercial spaces such as the Music Hall, a large part of Bergey’s portfolio is residential interior design; however, he has found that his commercial pursuits are well suited to his theatrical background. “I’ve really been quite smitten with my commercial projects because of their accessibility. More people see a public space, and it is something that changes based on who is walking through it. That’s what happens in a good play,” he says with a smile.

While it is artistically fitting that a designer with a background in theater would help create a remarkable performance space, the geography of the project makes it particularly fateful. Pursuing a lifelong intrigue with Maine, Bergey moved to Portland despite having never set foot in the state. At the age of 28, he worked as a dean at Maine College of Art on Congress Street, just four doors down from the site of the future Music Hall. For the two years he held that position, and even afterward, Bergey would walk by the space frequently, mentally noting the promise he saw in a location just one block from Monument Square in the heart of Portland’s Arts District. “I would just think, ‘Wow, there is nothing but potential here.’ Those amazing windows and the largeness of the front and this really elegantly simple 1940s facade…,” he says, his voice trailing off with the memory.

A few years after leaving MECA, Bergey’s daydreams were realized when he was commissioned to design the interiors for Port City Music Hall. “To come full circle from working with students and encouraging them to designing a place literally around the corner was really incredible,” says Bergey. Taking his chameleon-like approach to the project, Bergey worked to reinvent a space that had housed a sports bar and a movie theater in its recent past. Conscious of how the Music Hall would be used, Bergey sought to design interiors that would both celebrate the artist and respect the acoustics. “I wanted to create something that felt lyrical and inviting and warm,” he says. The hope for the new mid-sized venue, designed by Mark Sengelmann of ALPHAarchitects in Portland, was that it would draw a diverse variety of talented artists working in every musical genre. Bergey also sought to take advantage of the Hall’s advantageous location in the Arts District, a location he knew well.

The client’s goals for the interior of the long, narrow space boiled down to a list of five central themes: modern, metropolitan, non-industrial, warm, and vintage. Limited only by this broad list of characteristics, Bergey experienced an exciting rush of creative freedom when he embarked on the project. “It just opened up a world,” he says. Taking his inspiration from fashion magazines and his personal travels, Bergey sought to make the space “ethereal and moody, but not brooding.”

A wall of Shoji-screen-influenced light boxes was inspired by a recent trip to Japan, while a hand-painted, hand-glazed sixty-three-by-sixteen-foot iridescent lavender wall showcases the work of local artists. Envisioning “modern” and “metropolitan,” Bergey sought an update on mid-century modern furniture. He obtained most of the pieces from auctions, then had them stripped down, rebuilt, and upholstered with rich textures and colors that pop. All of the fabrics, while plush to the touch, are high-grade commercial quality, giving them the durability necessary for such a space.

“We wanted to create something that would draw in someone’s attention—not away from the music, but to slightly elevate their experience,” Bergey explains. The result is a space that not only meets all five of the criteria central to the client’s vision but is also flexible, airy, colorful, and inviting.

Several of Bergey’s own furniture designs, which are part of a new line he is developing, decorate the lounge area of the music hall—a healthy compromise, he says, between “anorexic furniture” and “overstuffed, obese furniture.” “My grandfather painted women in a time when models had hips and legs, and so did the furniture. I think in some ways a very literal interpretation of modern is so straight and streamlined, but for an entire place to look like this is very cold and industrial. I’d like to bring back the hipness and the roundedness,” he explains.

When he says this, Bergey is, of course, referring to a different kind of “hip.” But inside Portland’s shining new music hall, he has achieved the other kind of hipness as well.