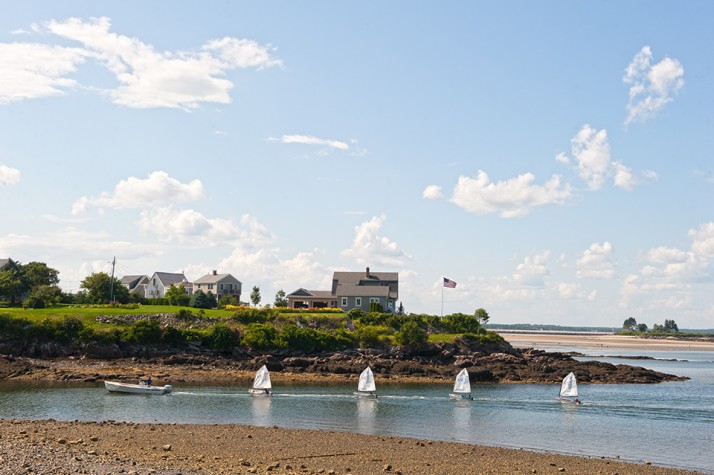 A view of a boat and her ducklings (that is, a row of sailing dinghies) from the front lawn of F.O. Goldthwaite. 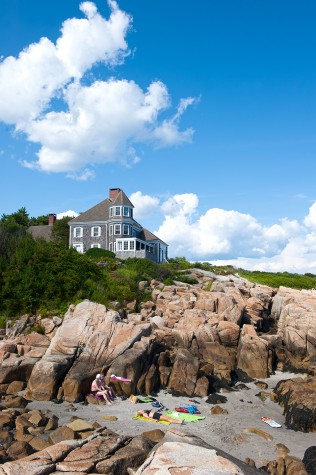 Biddeford Pool’s dynamic waterfront makes for nooks and crannies of all sorts, which change shape with the tide. 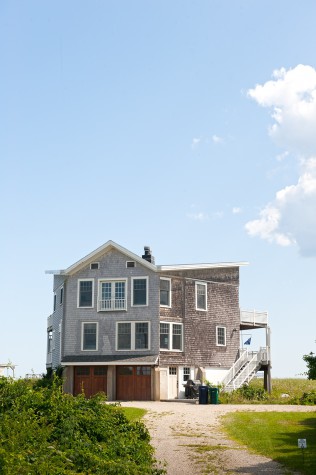 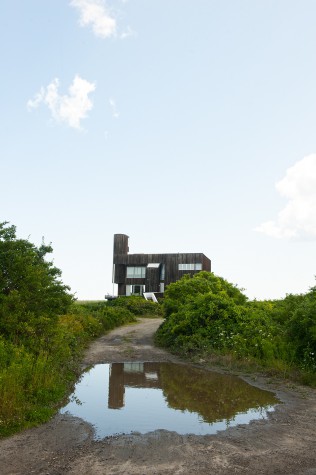 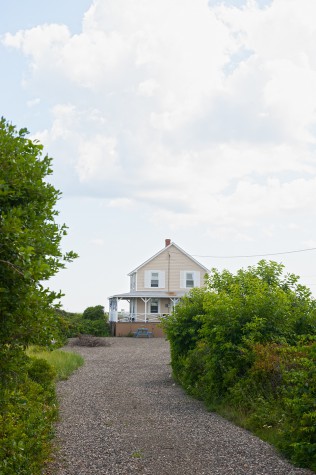 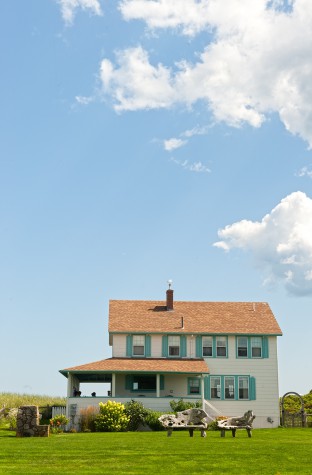 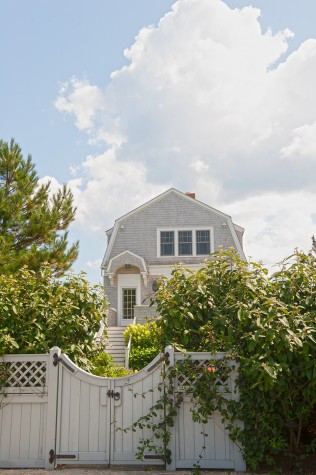 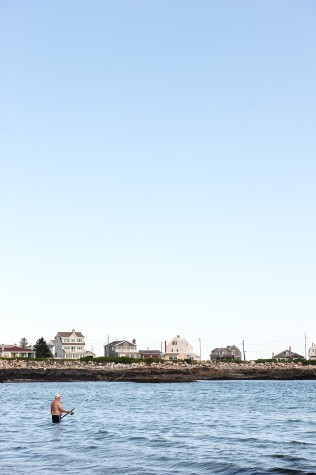 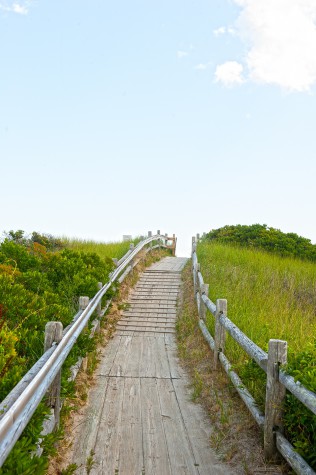 A board pathway to Fortunes Rocks Beach 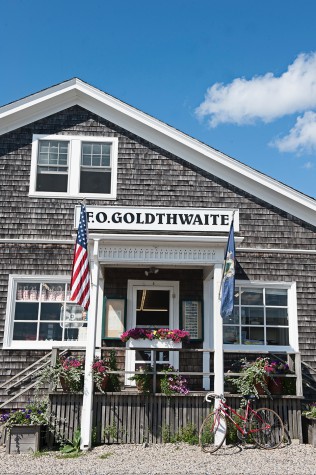 The beauty of Biddeford Pool. Exploring an out-of-the-way intertidal oasis near Kennebunkport

By now I’ve been here a few times, drawn maps in a couple of different notebooks, and still I have a hard time understanding the shape of the cape and just how and where the strips and chunks of land come together— or don’t, rather—to form this unique place called Biddeford Pool. What I do know: the central feature of this coastal village between Saco to the north and Kennebunkport to the south is the large tidal pool. Beyond the point where the Saco River drains into Saco Bay a strip of land wraps around the northern side of the pool. Running east from Kennebunkport’s Goose Rocks and Fortunes Rocks beaches, another strip of land encircles the southern end of the pool, forming this marvelous, beach-lined embrace. Biddeford Pool proper lies at the far end of that narrow southern strip.

On this summer day I am making my way down Mile Stretch Road toward the village and I pull over at the base of the pool to get my bearings. At high tide the water is still as a pond, reflecting the blue skies and puffy clouds overhead. I can’t see the ocean, but there are signs of it all over the place—in the lack of trees and the sandy ground sprouting tall grass. I park my car, walk over a hump of dune, and arrive at a wide beach, complete with crashing waves, just yards from that still pool. I’ve never seen anything quite like it, and herein lies the cause of my disorientation: the unlikely proximity of these two disparate bodies of water.

People come from all over the country and the world to be here. Wildlife does, too. Like so many intertidal areas around the world, Biddeford Pool is a popular layover for migrating birds; in fact, it is one of the premier birding destinations in the state. As I write this, six snowy owls were recently spotted. Seabirds of all kinds, including great cormorants, black guillemots, Atlantic puffins, and king eiders have been seen at East Point Sanctuary, a 30-acre preserve donated by Biddeford Pool residents in 1976 and now managed by the Audubon Society. Biddeford Pool even holds a special place in history, since it was home to one of the first European settlements in Maine, founded in 1616. Now, Biddeford Pool is home to year-round Mainers and, in the summer, to families who have been migrating northeast—many from the mid-Atlantic region—for generations.

Much like the geography, the architecture of Biddeford Pool is quite varied. Along the sandy shore of Fortunes Rocks are many tall, recently built or renovated beach homes with windows, decks, and porches galore— some of them with cylindrical towers reminiscent of the lighthouses rising up from nearby islands. There are modern homes composed of clean angles and older Capes with weathered wooden-shingle siding and gabled dormers trimmed out in peeling white. On a sunny summer day, public parking is a little challenging to come by, and the beach is just the right amount of crowded, spotted here and there with kids and parents and couples and friends sunbathing, fishing, and sand-castle building. I join a crew of kids climbing a collection of jagged rocks visible in the receding tide.

In the village of Biddeford Pool the homes are mostly small and exclusively older, many featuring plaques dating them to the nineteenth century and porches facing the road rather than the water. One of the things I love about the village, with its narrow, twisting roads, is that everything seems just the right size—that is, small. There is the small yacht club, the small post office across from the small market and seafood restaurant called F.O. Goldthwaite with flowers bubbling out of its boxes and bikes leaning against the porch. I order fried seafood and sit outside at a picnic table overlooking the water. Beside me—no joke—women in floppy hats are painting en plein air. The view is of Basket and Stage islands. I watch as a fishing boat comes puttering in from the bay to the pool.

Beyond the village, I take L.B. Orcutt Boulevard past stately homes that sprawl lengthwise along the road toward the golf course and the East Point Sanctuary, which is nestled within the golf course and among private homes. From here, the view of Wood Island and its legendary lighthouse is pretty spectacular. Along the eastern edge of the cape, near Ocean Avenue, over and over again I try to pull over, take in the scene of the ocean crashing on rocks, seabirds dancing around in the wake, but there is hardly any shoulder. The roads form a tic-tac- toe board of new construction and old cottages—that Maine combination in evidence along so much of Maine’s coast.

But a few twists and turns later I find myself back at the village, surveying a scene that is unique to Biddeford Pool. The tide is pulling out, and the pool is now edged in mudflats. Boats have come in for the day and are collected in the gut of the pool, which remains deep enough to house them even during the lowest of low tides. By now it is late afternoon. The sky is beginning to blush, and the water holds a mirror to all its color. A few men and boys in galoshes, buckets in hand, head out into the flats to dig for clams. I think that I’d like to return to Fortunes Rocks before the day is out, but I end up taking someone up on the offer of an Adirondack chair looking out over the pool and the silhouetted clam diggers. And so my day ends this way: facing the calm center of this anomalous beach town, almost but not quite at the beach.