Color on the Coast 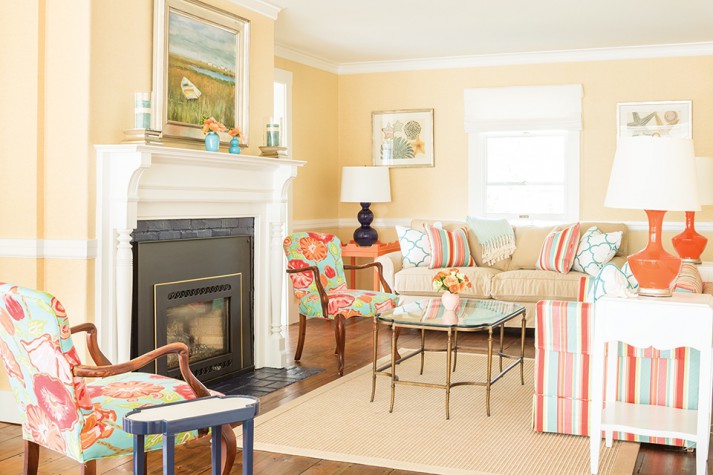 Graphic fabrics from Thibaut’s Resort Collection transformed the couple’s existing living room furniture. Hints of navy blue on the fireplace and strategic pieces—note how the indigo Oomph side table echoes the quatrefoil pattern on throw pillows—balance the bold shades. The orange table is also by Oomph. The sea-life prints are from Wendover Art Group. 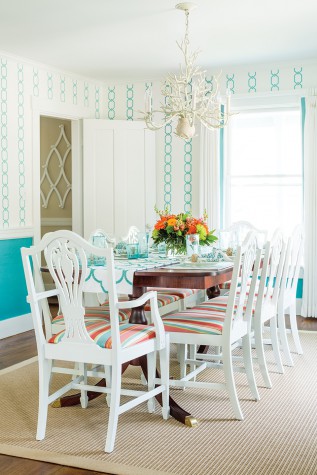 The dining room’s antique mahogany chairs didn’t exactly say “beach house,” so the designers had them reupholstered and painted white. Printed grasscloth wallpaper by Thibaut picks up the texture of the sisal-like carpet and tempers Benjamin Moore’s Blue Spa shade on the lower walls. The coral-inspired chandelier is from Currey and Company. 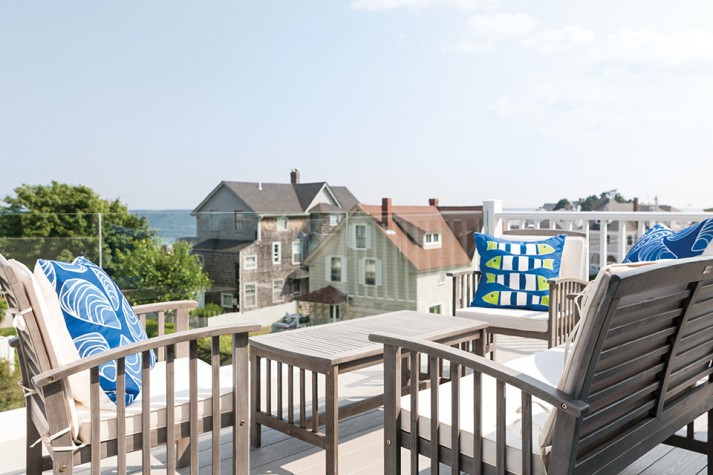 From a cushioned seat on the roof deck, you can see through a glass railing to Mother’s Beach and beyond; the printed canvas pillows are by Kennebunkport artist Kate Nelligan. 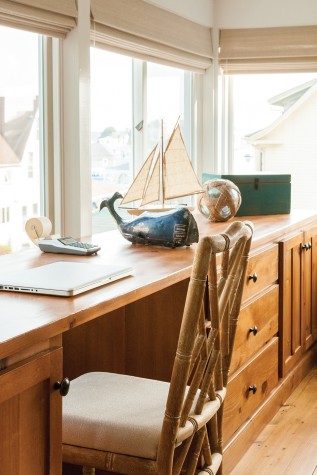 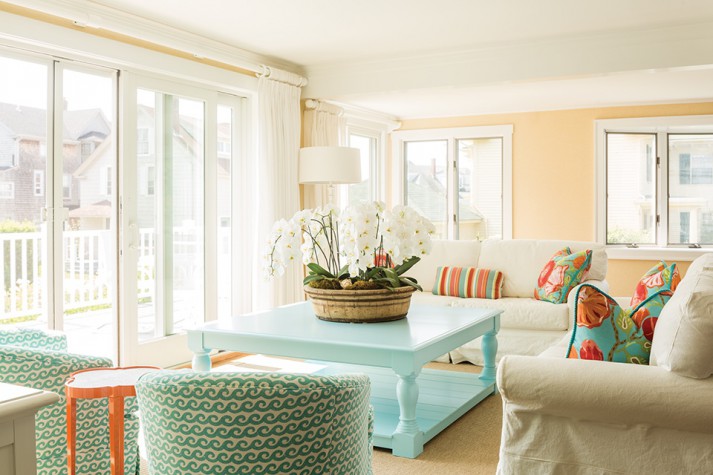 In the sitting room, slipcovered sofas, swivel chairs upholstered in more of Thibault’s Resort fabric, and a giant, cottagey coffee table by Derek Preble of Biddeford create a look as breezy as a day at the beach. 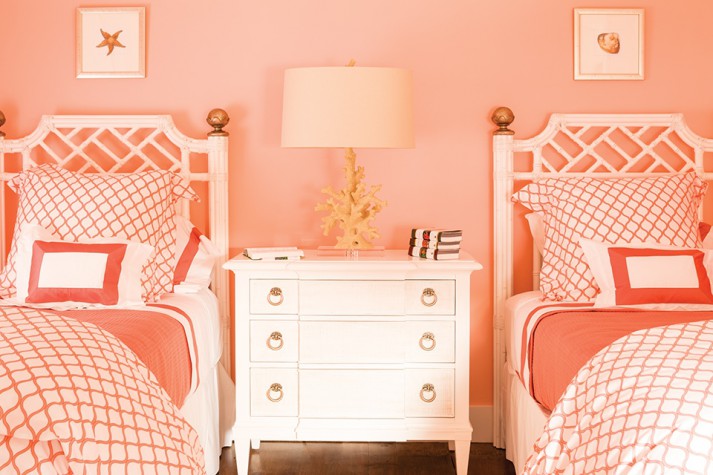 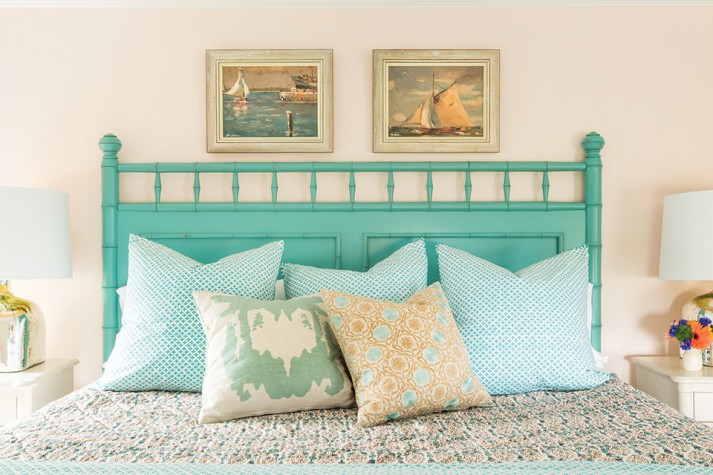 John Robshaw bedding in aqua and peach prints inspired the palette in another guest room. Faux bamboo detailing, seen here on a headboard from Hurlbutt Designs, is a theme throughout the house. 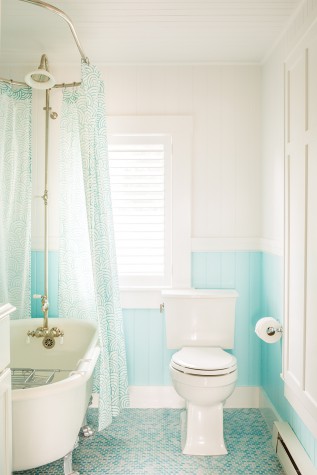 The owners re-enameled the home’s original cast-iron tub located in a guest bathroom, and installed new plumbing and fixtures. Distinctive Tile and Design in Portland provided the ceramic penny rounds on the floor. 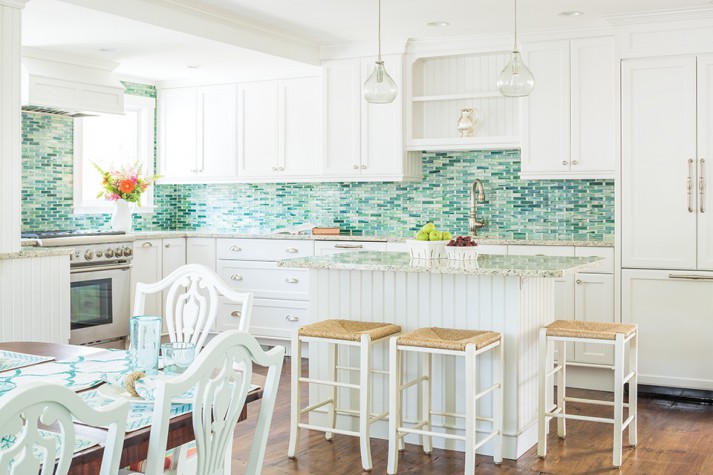 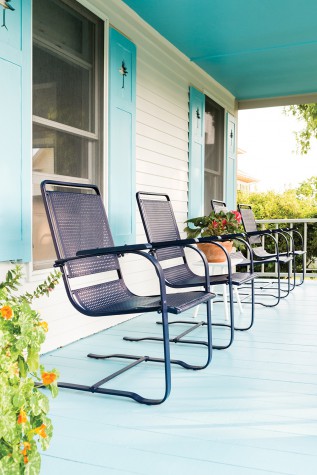 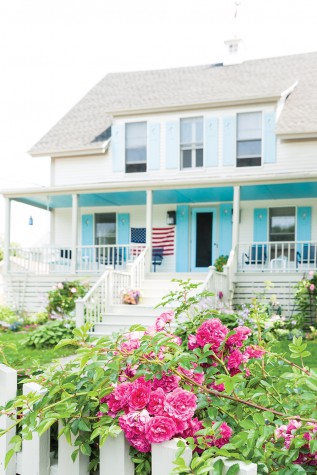 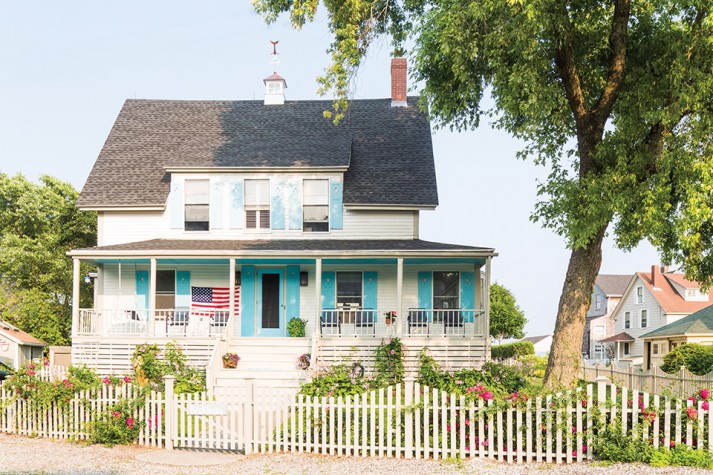 Bill and Julia Beckham used splashes of Benjamin Moore’s Seaside Blue to harmonize their home’s exterior with the spirited palette inside and “to shake up the neighborhood a little,” says Bill with a laugh.

If you throw a Frisbee in Kennebunk Beach, it’ll likely land on the lawn of someone connected to Bill Beckham. Or, at least, it seems that way. He has an aunt and cousin on the south side of the neighborhood, cousins to the north, a sister to the west, and an aunt and uncle who live next door to the 1894 Victorian he shares with his wife, Julia, on a central street lined with neatly fenced cottages. His sister plans to build a new house across the road. Sprinkled throughout the little community at the south end of Kennebunk are the homes of many longtime friends and dozens of places Bill’s family has rented or owned over the years. “If I don’t know who lives in a house, I often know who used to be there,” says Bill, who rattles off addresses in the area the way some people dispense baseball statistics. “I have so many happy memories here.”

Bill’s grandparents purchased the family’s first Kennebunk home on Beach Avenue in 1938. He spent his earliest summers there, then moved around the neighborhood with his parents and, later, his own family, eventually inheriting his mother’s place on the Webhannet Golf Club course. But the Beckhams, who are based in Miami and have five children in their 20s, dreamed of being closer to the ocean. In 2013 they zeroed in on the Victorian a few yards in from Mother’s Beach that coincidentally, Bill’s parents had rented nearly 50 years earlier. “I remember loving the location, and I still do,” he says. “Our other home was somewhat secluded, and here we’re the happy-hour spot. We like seeing all of our neighbors and hearing the kids from the local camp playing Marco Polo in the water.” As for the structure itself? “We felt like we could do some things to make it more comfortable for our large family and give it pizzazz, but we didn’t know what,” he says.

They did, however, know whom to call. The Beckhams were acquainted with Louise Hurlbutt of Hurlbutt Designs in Kennebunk and had seen her work in friends’ homes. Bill’s sister recommended Tim Spang, owner of Spang Builders in Kennebunkport. “There’s hardly any part of town those two have not touched,” says Julia. “Their combined experience and creativity gave us a lot of comfort, which was crucial since we were mostly planning from 1,600 miles away.” Lead designer Annie Talmage, also of Hurlbutt Designs, and Wells draftsman Tom Bouchard, who revamped the floor plans, rounded out the team.

Like a lot of old cottages in the area, this one started out small and was added onto over the years, resulting in a patchwork of enclosed spaces that were largely shielded from the water view. To open things up, the team removed five interior walls on the first floor and installed a bank of sliding glass doors in the rear sitting area. Now when you enter the front living room you can see straight through to the sea shimmering at the end of the street. Upstairs they moved doorways, creating more logical routes between four bedrooms and a pair of bathrooms on the second story, and installed a shed dormer in the attic that spans the length of the house on the backside. “Going with that size dormer, instead of the smaller one we considered, enabled us to really transform the space,” says Spang.

What was once a collection of tiny rooms with steeply sloped ceilings is now an airy owners’ suite that includes a bathroom, laundry area, and coffee/champagne station. “When we have a houseful of college kids I like to hunker down up there,” says Julia. More incentive to stay put: from their bed the Beckhams can study the blues in the sea and sky through a glass railing on the room’s adjoining deck. And when they step outside, flutes of Veuve Clicquot in hand, they can see snippets of the scallop- edged coast, from Wells to Walker’s Point in Kennebunkport.

On one of her first visits to Hurlbutt’s studio, Julia fell in love with a sampling of patterns from wallpaper and fabric manufacturer Thibaut’s Resort Collection. The vibrant floral and geometric motifs, now intermixed on the home’s first floor, inspired the playful tone and the palette of aqua, coral, and orange that runs through all three levels. “People typically come to us wanting blue and white,” says Hurlbutt. “We’ve built a brand around those colors and we adore them, but we also love branching out.” In her opinion, as long as a house’s exterior stays true to its setting— here, a cottage among cottages—“the inside can be anything that reflects the client’s personality.”

This client wanted to bring “a bit of Miami to Maine,” says Talmage, who worked with Julia on combining Thibaut’s tropically inspired designs. Moving through the open-plan downstairs, you see the giant poppy print on a pair of living room armchairs repeated on throw pillows in the sitting area. The awning-like stripes on the living room’s loveseat also appear on pillows and dining chairs. And the aqua-on-white scheme seen on the dining room’s chain-motif wallpaper is carried through on wave- and quatrefoil-patterned upholstery and pillows in the living spaces. The effect of such careful commingling is rooms that feel distinct yet cohesive, as if all the furnishings are participating in the same exuberant conversation.

If the living/dining area is a big back-and-forth, the bedrooms are a series of private dialogues, each with its own unique patterns and color pairings. In one guest room, the designers went for a monochromatic scheme, matching Sferra bedding in bright coral striped and lattice prints with Benjamin Moore’s equally eye-popping Salmon Peach shade on the walls. Another room features the complementary kapow of a turquoise faux-bamboo headboard layered over pale Peach Parfait walls; a collection of John Robshaw linens in intricate blue-green and muted orange prints pulls the palette together.

Strokes of navy blue—on the treads and railing of the main staircase, the bricks around the living- room fireplace, and accent pieces throughout the house—unify the various spaces and “ground them in a little of the coastal Maine aesthetic,” says Talmage. Natural texture is another theme. The owners’ bedroom is furnished with a custom raffia headboard, wool-sisal rug, and case goods inset with rattan panels. There are sisal-like carpets in the living/ sitting area, along with raffia cubes and tabletops. Buttery Thibaut grasscloth wallpaper brings coziness, like the rooms are wrapped in a warm blanket. “We are so thrilled when people are willing to do wallpaper—it adds a whole other dimension,” says Hurlbutt.

The Beckhams spend five months a year here, socializing, sailing, paddle- boarding, beachcombing, golfing, and gardening (and, when necessary, working). On clear days, they like to set up a telescope on the deck off their bedroom and take in the coast. One morning last June, Julia caught a glimpse of George H.W. Bush parachuting through the sky on his ninetieth birthday and quickly focused in. “It was so exciting, this presidential sighting,” she says. For Bill, the area’s resident Kevin Bacon, the event had a personal connection: his parents were married at St. Ann’s Episcopal church in Kennebunkport, where 41 landed.