Back in the Neighborhood…For Now 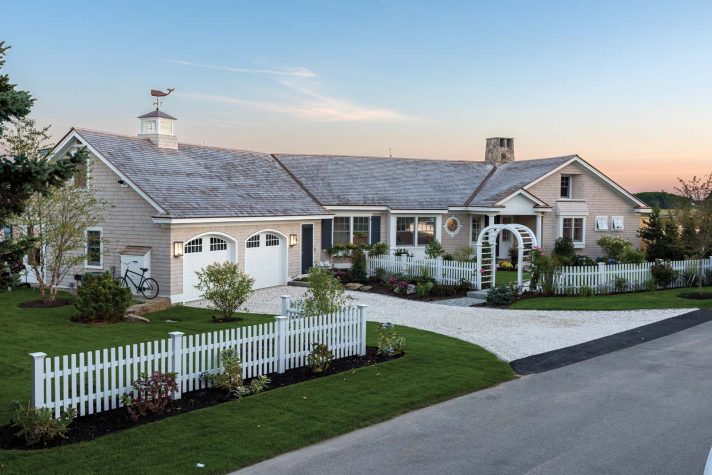 Without changing the basic form of the original 1960s ranch, Harrington wanted his house to look like a Cape Cod house, with a white picket fence, arbor, and crushed shell driveway from the front but to be completely open and modern on the back. Architectural designer William Ross played with detailing, such as the curved walls of the gable window and the curved garage doors with windows, to give the exterior additional visual interest. A whale weathervane tops the cupola. 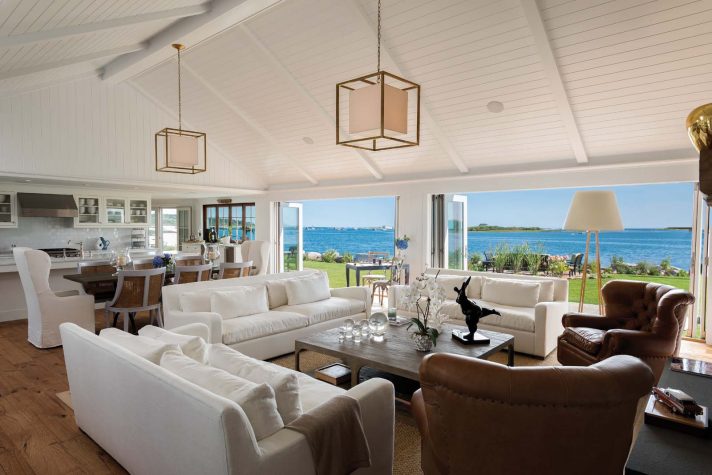 Working within the rooflines of an existing 1960s ranch, builder Kevin Lord and architectural designer William Ross created a chic cottage space by eliminating walls and incorporating what had once been attic space into a great room with exposed beams. A breakfast sitting area and a staircase to the second-floor guest rooms are behind the kitchen wall. An owner’s bedroom suite is to the right of what is pictured here. Two 16-foot bifold glass doors accordion back so the indoors becomes coextensive with the outdoors. The white walls have vertical beadboard, and the ceilings have horizontal V-groove boarding. The two types of paneling meet at a cove moulding with uplights that rim the room. 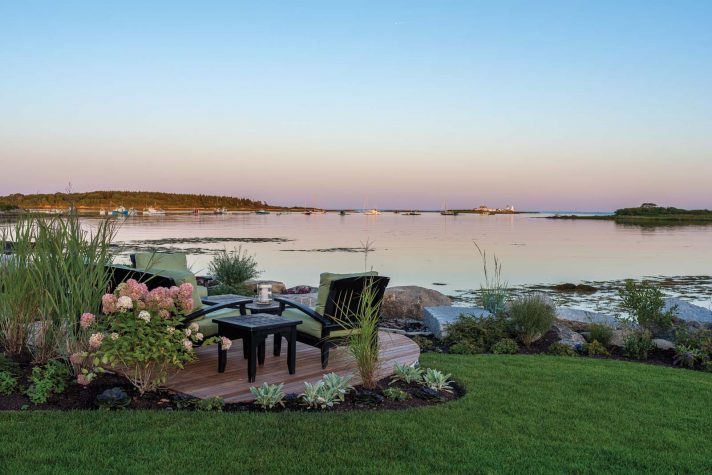 A view of Cape Porpoise harbor out toward Goat Island at sunset. The deck area is surrounded by plantings designed by Ted Carter of Ted Carter Inspired Landscapes in Buxton. 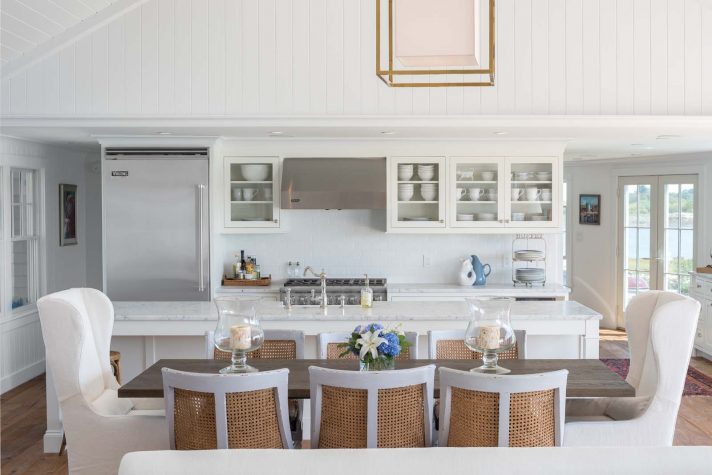 The palette throughout the house is white with textured neutrals. In the kitchen and dining area, the white cabinetry, dishes, and armchairs are accompanied by a custom oak-topped table that was stained gray and wire brushed and antique gray chairs with chestnut brown caning and leather seats. The upholstered wing chairs are from Restoration Hardware. 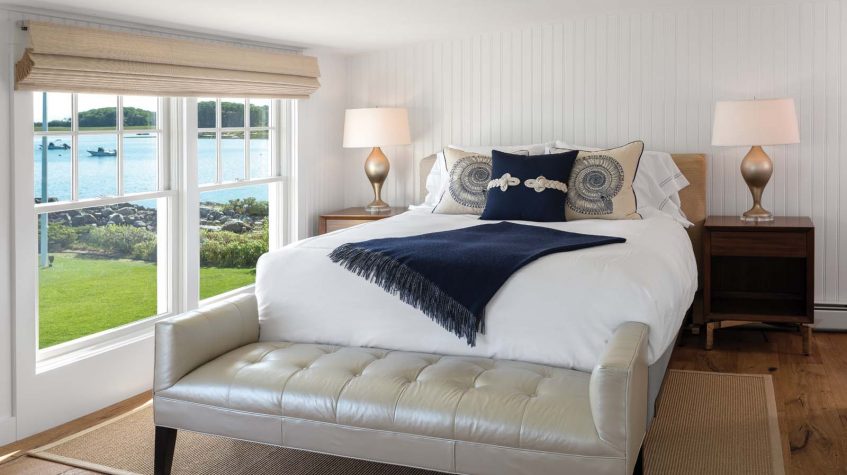 In one of two second-floor guest bedrooms, lamps and a tufted leather bench with a silver tone give the room a more modern look. The beadboard on the downstairs walls is used in this room as well. The navy pillows offer a nautical touch. 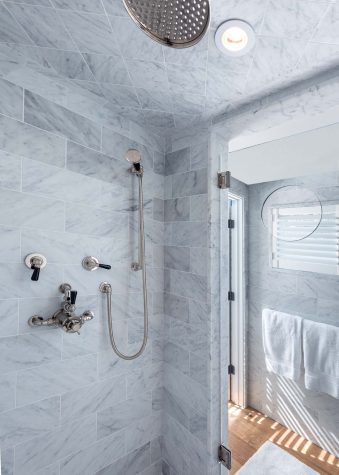 The owner’s bedroom shower has two unique features: Lefroy Brooks fixtures with black porcelain handles instead of the usual white, and a glass door with a circle cut out to suggest a porthole. 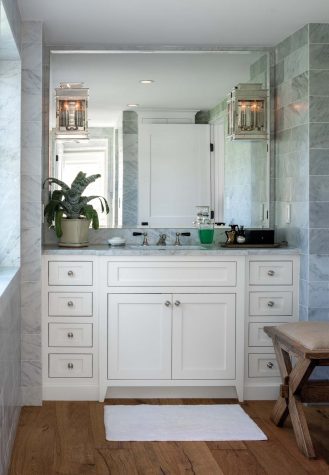 Adam Biales of Holyoke, Massachusetts, is responsible for the custom vanity in the owner's bathroom (as well as custom cabinetry throughout the house), which also features Lefroy Brooks fixtures with black porcelain handles. The DuChateau brushed oak floors from Distinctive Tile and Design run throughout the rest of the house as well. 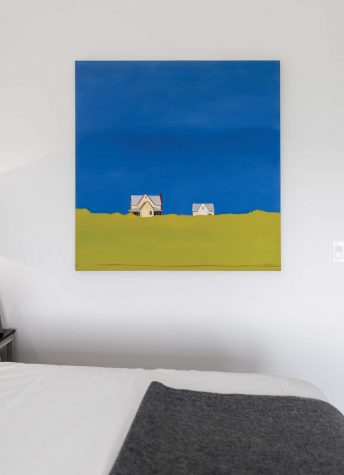 A Jean Jack painting in the owner’s bedroom. 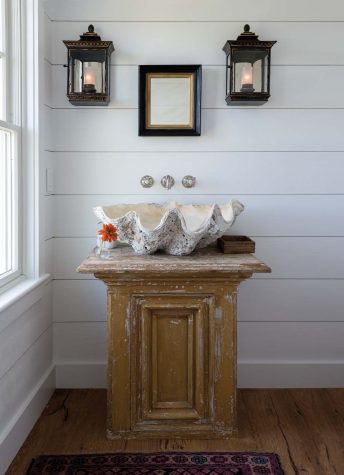 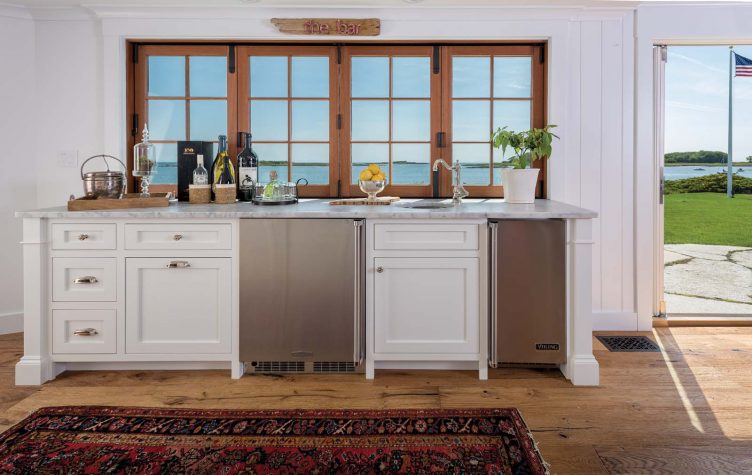 As in Harrington’s previous house, a bifold window—then over the kitchen sink, now over the liquor cabinet—slides back to an outdoor countertop that functions, thanks to exterior stools, as a bar area. The window frame is mahogany. The countertop here and in the rest of the kitchen is Carrara marble. 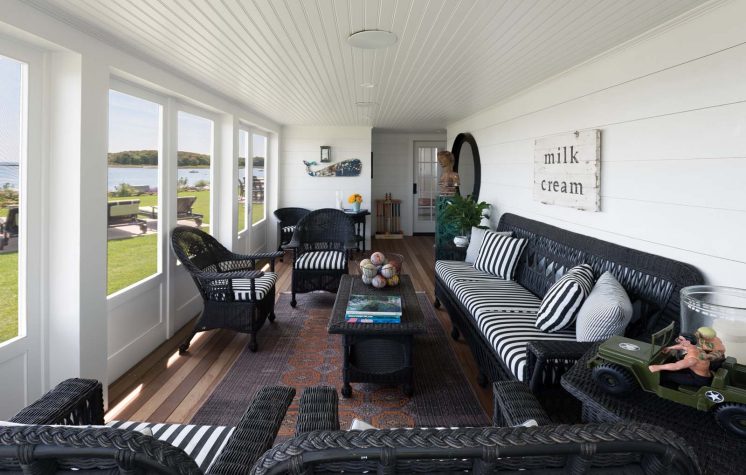 A side porch has black wicker furniture from a previous house and walls of “corduroy pine,” named for the look and texture of the slightly ribbed wood.

Miami-based Tim Harrington is an active developer responsible for multiple luxury hotels, restaurants, a gym/health center, and other properties, new and developing, in the Kennebunks and Biddeford. He’s been busy on the home front, too, having renovated eight houses in the 29 years that he’s lived off and on in the Kennebunks. In 2013, when I visited the 1880s post-and-beam he’d renovated on the mouth of the Kennebunk River, he told me he was done, at least when it came to his own abodes. The post-and-beam was the house that he loved, the house he was going to stay in.

“You’ve taken over the role of my mother, now that she’s gone,” Harrington laughs when I needle him. “Did I really say that?” he adds. “Well, I guess I should stop saying that.”

The thing is, he admits, he gets enthusiasms…and then he likes to carry them through.

Harrington’s latest personal project returns him to a place he knows well: Cape Porpoise’s Langsford Road, a byway of modest cottage homes with captivating views of the working harbor. Harrington has lived in two other houses on the street; in addition, his current house is next door to where his aunt once resided. When he played in her yard as a boy, his ocean view included the 1960s brick-front ranch that he has recently come to own, then transform.

Because of zoning restrictions, the actual volume of the ranch could not be changed. The rooflines, basic shape, and footprint had to be left intact. Everything else, however, would get a major overhaul. “From the outside, I wanted to make it look like a traditional cottage,” Harrington says. “On the back, I wanted it much more contemporary: all glass and right there on the water.”

Thanks to the talents of builder Kevin Lord of Thomas and Lord in Kennebunk and architectural designer William Ross of William Ross Design in York Harbor, Harrington achieved a cottage look with white-cedar wall shingles, red-cedar roof shingles, fresh white trim, and a glass-and-shingle cupola with a whale weathervane, as well as arched white garage doors. Inside, the first floor offers beautiful ocean views through two 16-foot bifold glass doors and a mahogany-framed bifold window set above the kitchen’s bar. On a summer day, the doors and window accordion back, effectively peeling away one wall of the house to make the living room and dining room coextensive with the backyard and ocean.

Harrington’s longtime collaborator and friend, interior designer Louise Hurlbutt of Hurlbutt Designs in Kennebunk, observes that Harrington chose a simple palette—white for almost everything save for natural neutrals such as sisal rugs and a floor-to-ceiling living room fireplace in fieldstone—so that nothing would conflict with the views. In some ways, Harrington’s Cape Porpoise property is his previous house turned upside down. In his former home, Harrington had an owner’s bedroom suite with an ancillary kitchen on the second floor. The living room, main kitchen, and smaller guest bedrooms were downstairs, the latter located off the entry, and not quite as dramatic or large as Harrington’s upstairs bedroom. In his new home all the bedrooms are impressive, and Harrington now enjoys his single-floor living on the first floor. The great room has white beadboard walls and a cathedral ceiling with V-groove boarding and exposed beams. Cove moulding with uplights rims the room, separating the horizontal wall boarding from the vertical ceiling paneling. The kitchen, dining room, and living room function as a single space, but there is also a breakfast nook with coffee stationthat is open to the other areas but tucked behind the kitchen. This is also where the stairs to the guest rooms are hidden. The upstairs guest rooms are fitted out like luxurious hotel rooms, with beds with tufted upholstered headboards, custom pillows, and Cuddledown linens, the same bedding used at the hotels in the Kennebunkport Resort Collection, of which Harrington is partner and creative director.

Throughout the house, contrasting textures complement the palette: in the living room, white linen upholstered sofas are paired with tan leather armchairs, while in the dining area an oak-topped table (stained gray and wire brushed) rests on an iron base that Hurlbutt found in France. (The custom top was made by Derek Preble in Biddeford.) The surrounding seating includes antique chairs with chestnut brown cane backs and leather seats and, at either end of the table, white upholstered wing chairs from Restoration Hardware. Above hangs a pendant light with a square fabric shade that seems to float in an open brass cube.

For the exterior, Ted Carter of Buxton’s Ted Carter Inspired Landscapes says, “Timmy wanted Nantucket. Something sweet and dear.” To that end, beside a broken shell driveway a simple arched arbor introduces a cobblestone path cutting through a front lawn, which is defined by a white picket fence and plantings that, according to Carter, work as “a form of architecture,” here and elsewhere. Because he “can’t compete with the ocean,” Carter uses indigenous plantings such as high- and low-bush blueberries, ornamental grasses, and Russian sage to integrate the house with its environment. In winter, the rocks are most dominant, with hunks of boulder that establish what Carter refers to as a “helter-skelter ocean-break wall.” Come summer, the flowering and woody aspects of the property come to life. Caryopteris, a late-summer blooming plant, forms part of Carter’s light blue and white vegetative palette.

Against the white walls and furnishings of the house, black appears as an occasional contrast. The screened porch has antique black wicker furniture from a previous house. The owner’s bathroom has Lefroy Brooks’s polished nickel fixtures with black handles, and the bedroom has black linen Mitchell Gold and Bob Williams swivel chairs and a black and white rug. Only, on the day I visit, just as I am penning some notes about the works by Maine-based painters Jean Jack and Eric Hopkins that adorn the walls of Harrington’s bedroom, two men enter the room. They remove the rug and swap out a black chair for a white one. There’s a brief discussion of moving the bed to the right to create more of a sitting area by the window. I can’t imagine who would protest the plan, though before the men arrived, it all looked rather fabulous to me. Not to mention comfortable. But, as always, Harrington has other ideas. 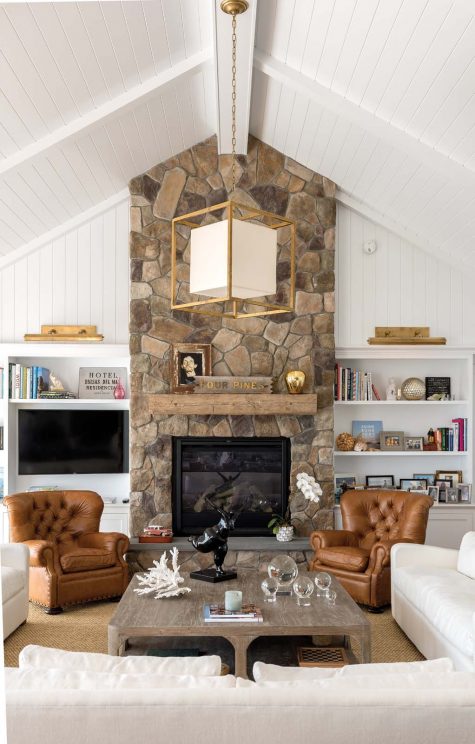 One end of the great room is anchored by a floor-to-ceiling chimney made of fieldstone. Jeff Binette of SmartHome Solutions in Kennebunk installed TV sets in the living room and owner’s bedroom. He also provided a distributed audio system, which can be controlled with a smart phone app. There are speakers in several rooms of the house as well as in a rock in the backyard. A supporting steel beam is wrapped in wood and painted white. 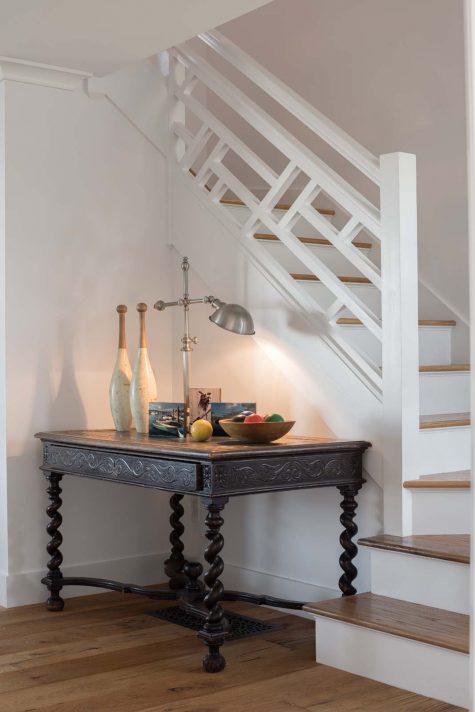 Interior designer Louise Hurlbutt says the design of the staircase was inspired by the Brighton Pavilion in England. The table at the base is an English antique with a leather top and legs called a “barley twist.” 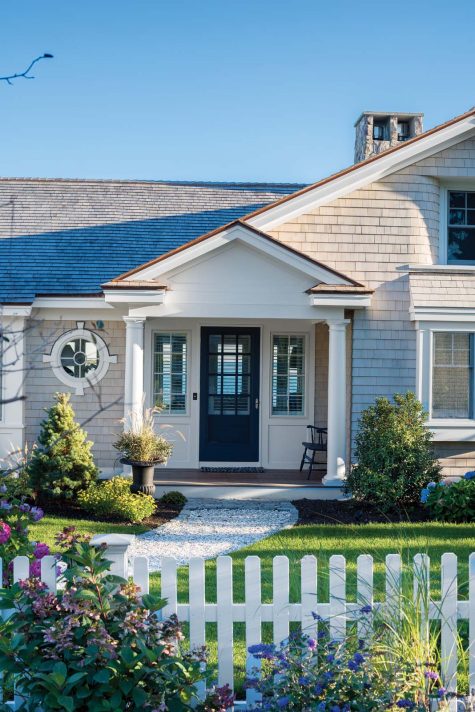