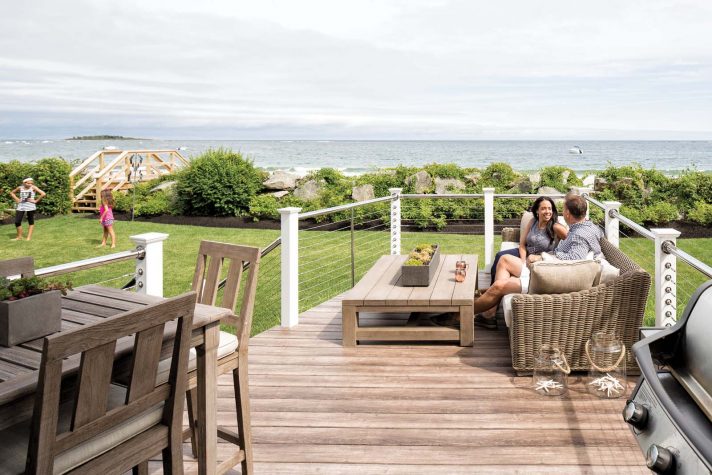 Chris and Lisa King sit on the deck outside their Goose Rocks Beach home while two of their children, Madison and Bryanna, play nearby. The deck railing complements the home’s nautical style. 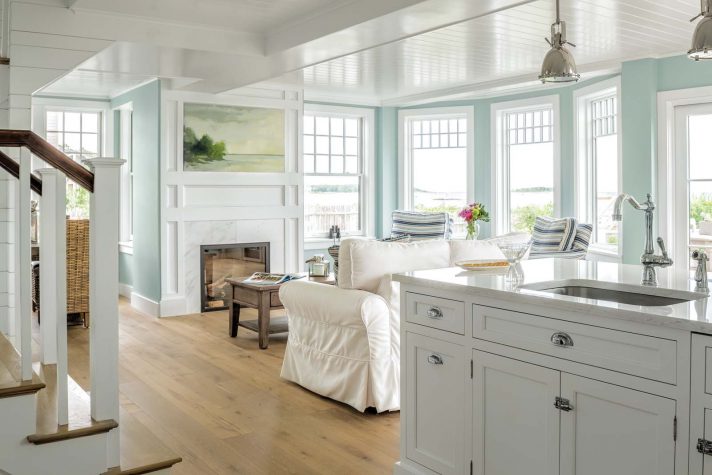 The open floor plan creates a feeling of spaciousness. Above the living area’s mantel is Allen Bunker’s oil on canvas Green Trees. 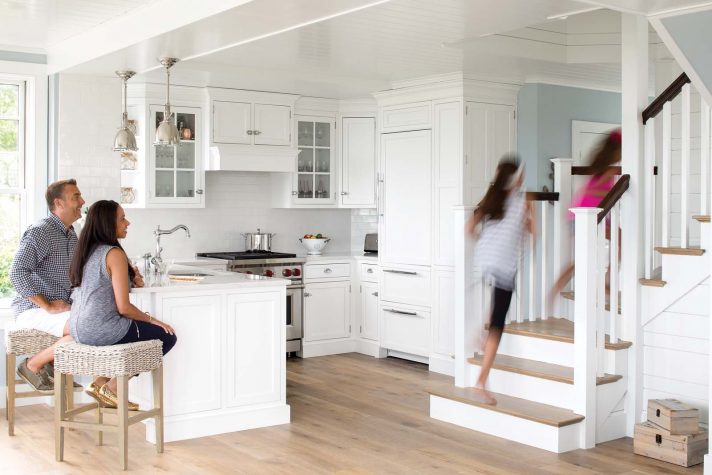 Atlantic Design Center designed the kitchen, which has many small nods to Chris’s love of yachting, including cleatshaped pulls on the refrigerator and metal latches on the cabinets. 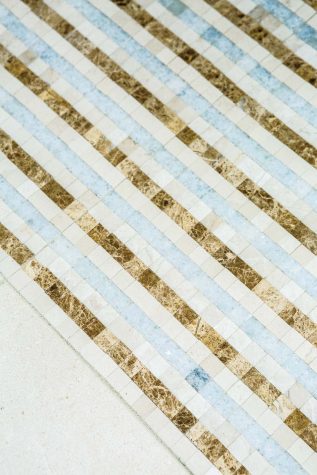 The tile design in the downstairs bathroom is by Atlantic Design Center. 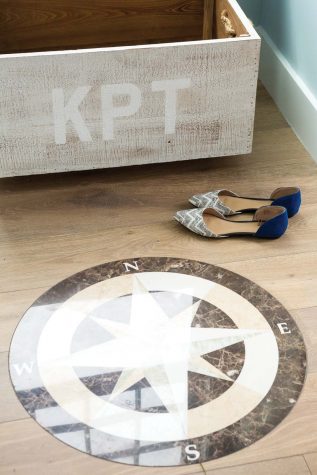 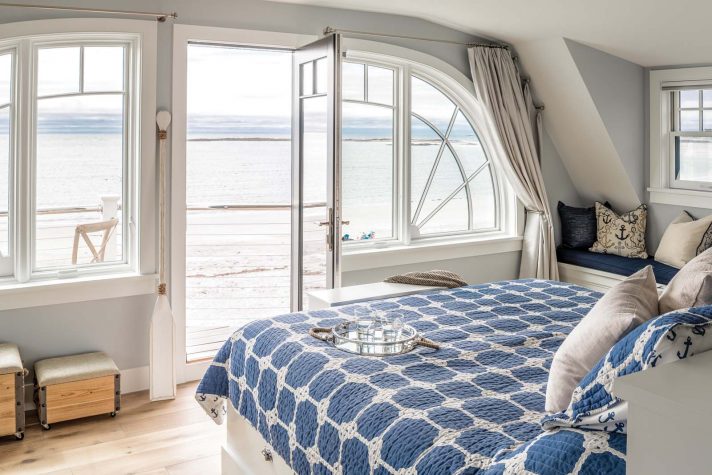 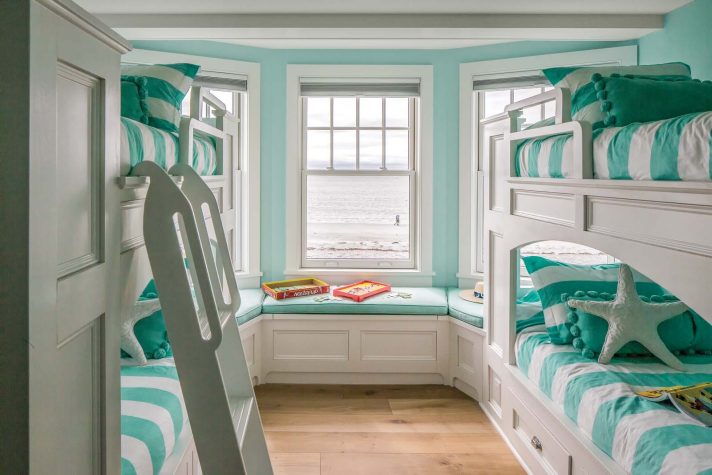 For the girls’ room, the couple decided on the color combination of sea foam green and white. Extra storage is tucked under the bunk beds. 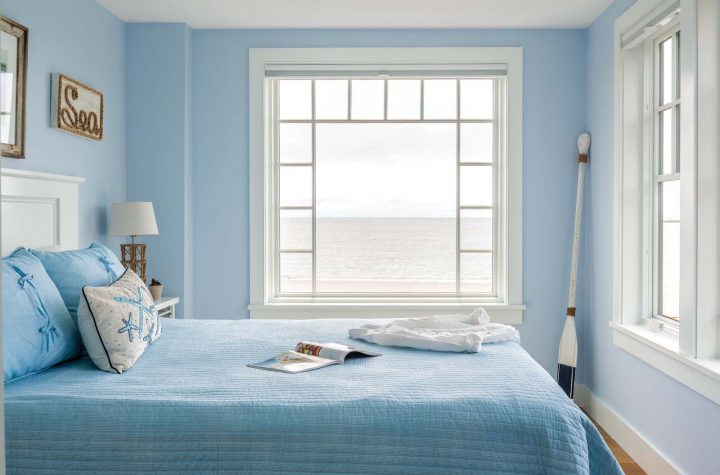 In the guest room, windows with minimal muntins provide the best possible views. 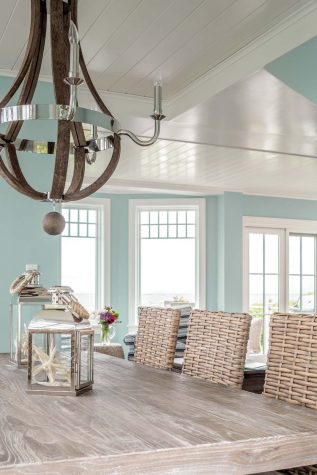 A rustic chandelier from Restoration Hardware hangs above the dining table. 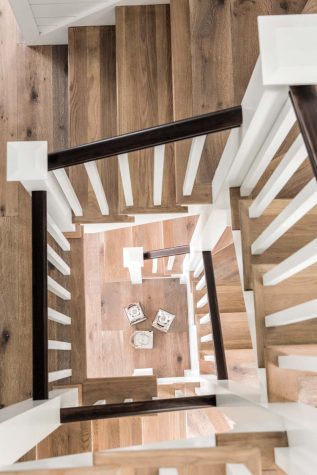 The view looking down from the third floor. 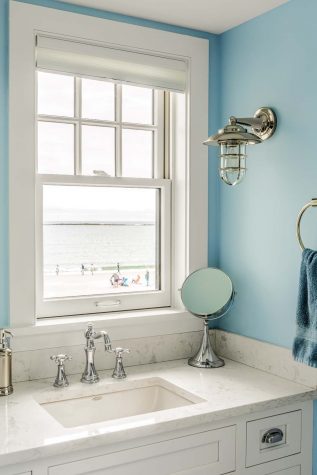 A bathroom features marble countertops and a view of the beach. The sconce is from the Lighthouse in Kennebunk. 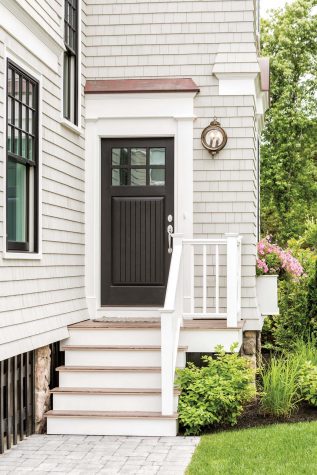 An exterior door matches the black of the Pella custom windows. 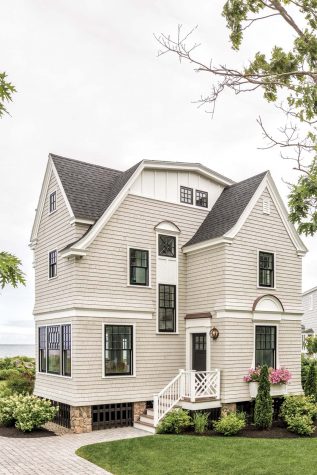 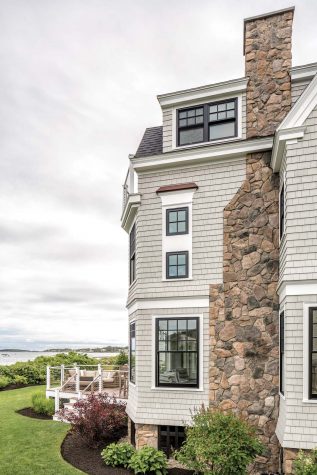 Three years ago, Lisa and Chris King were walking along Goose Rocks Beach in Kennebunkport with their two younger daughters. For years, the Kings had spent their summers vacationing on their 45-foot yacht, which they docked at Constitution Marina in Boston, but they were ready for a change. They decided on a whim to take a trip to the Kennebunks. Neither Lisa nor Chris were particularly familiar with Kennebunkport, but they felt drawn to the charm of the lower village and the raw beauty of the coastline. Then, as they were discussing their home-buying options, their daughter Bryanna ran up to them with a sand dollar in hand.

“She told me she found a whole sand dollar—one that wasn’t broken,” Lisa recalls. “I thought she was yanking my chain at first. But it was real. Here I was, 42 years old, and seeing my first whole sand dollar in the wild.” Even though she’d visited Florida beaches as a child, and even though she spent her summers on the Massachusetts coast, this was a new experience for Lisa. “It felt like a sign,” she says.

Lisa relays this story while seated on a custom-made, nautical-striped swivel chair in front of a large window in her Goose Rocks Beach home. A few feet away, builder Jonathan Trudo of Creative Coast Construction in Kennebunkport is examining the deck railing through the window. “The cords need tightening,” he says, pointing at the steel cords that surround the 200-square-foot deck. He’s ostensibly here for the interview, but Trudo can’t stop examining his own handiwork. Despite its location just feet from the pounding surf, the cleverly designed beach house is holding up well. (And if anything should go amiss, Trudo lives right down the street and is happy to come by for repairs.)

The Kings began construction in 2014 after tearing down an existing structure. “It was a small cottage, and it wasn’t in good shape at all,” Trudo says. Not only was the former beach house rather dated, it was also quite cramped. The couple’s four children range in age from 7 to 21, and if the Kings were going to build a vacation house, they wanted to have room for their kids, their kids’ friends, and any other weekend visitors.

However, their space needs presented a problem. While the couple loved the seaside lot and its charming coastal neighborhood, zoning laws made it impossible for them to expand the original footprint of nearly 700 square feet. There were other limitations, too. They couldn’t build very high, due to Kennebunkport’s 30-foot height restriction,
including the 3-foot piers the house had to be built on because of its proximity to the water.

“It was a very tricky house structurally,” says architectural designer Erik Peterson of Peterson Design Group Architecture in Kennebunk, who designed the couple’s shingle-style beach house. They wanted to have three stories, which would allow room for guest bedrooms and an owners’ suite (complete with a balcony up top), as well as rooms for all four children, including Chris’s adult kids, Courtney and Kyle. But, as Peterson explains, “Three stories in 27 feet is very, very tight.” Furthermore, the couple wanted an open-concept house to take advantage of the beachfront views and the natural light. “It was a puzzle. We had to get creative to figure out how everything would fit, but we managed to get in three and a half bathrooms and a nice owners’ suite plus the downstairs living area,” he says.

They accomplished this feat by using Microllam framing (a steel alternative made from compressed lumber) and lots of built-in storage and furniture. Microllam is strong and compact, which means that the floors could be half as thick as those in a traditionally framed house, thus opening up 15 inches of extra space. While 15 inches may not sound like a lot, it enabled Peterson to squeeze in the third floor. “They’re boat people,” says Peterson of his clients. “They were perfect candidates for a house that has no fat and no wasted space.”

Thanks to their years on the yacht, the Kings were used to built-in furniture, which made it easier for Peterson and Trudo to sell them on the necessity of having bedframes attached to the wall and drawers tucked under bunk beds. The second floor is a particularly impressive example of space-saving millwork. “We had to find storage space wherever we
could,” Chris says. “We knew we wouldn’t have space for dressers, so we put added storage under the window seat, as well as under the beds.” The second floor houses a guest room with a queen-size bed built into the wall as well as a second bunk room. “We wanted to make sure that we had plenty of places for our guests to sleep,” Lisa adds. Even though the house has a small footprint, it can comfortably accommodate up to 10, thanks to the many beds and bathrooms.

Another way that the Kings paid tribute to their summers at sea is through the decor. The couple worked closely together on all elements of interior design, and they have successfully blended visual elements of traditional nautical decor with tasteful nods to the beachfront landscape (like bathroom tiles inspired by beach stones and floorboards stained a soft gray to evoke driftwood). They keep the space fresh by sticking to a limited palette (bright white and soft gray-blue) and choosing to emphasize the functional aspects of a ship instead of the decorative. In the kitchen, cabinets close with latches, and the refrigerator has been outfitted with boat cleats instead of standard handles. Blue and white quilts adorn the beds, and the walls of the stairway are covered in white-painted, random-width nickel-gap wood. Another example of their attention to detail can be found in the couple’s upstairs bedroom, where Lisa designed a square stained-glass window with a blue-tinted compass rose. “I couldn’t find anything I liked,” she says. “Every single piece of stained glass I saw was too beachy, with waves and birds. That’s just not me. I wanted nautical and clean.”

The exterior of the house shows a similar restraint, from the black window trim to the light gray cedar shingles. Peterson was able to add a 200-square-foot deck, which helps increase the overall usable space for the home. However, Chris didn’t want to ruin the views of the water with a thick wood railing. “I wanted something that would blend right into the background,” he says. Fortunately, Trudo had a solution: he found a product called RailEasy Nautilus, which is composed of a system of stainless-steel cables and handrails that connect to white vinyl posts. “The cables reminded me right away of the boat,” says Chris. Adds Trudo, “And they don’t detract from the view at all.”

The family uses the deck constantly in the summer. It’s where they hold game nights, and it’s where the couple’s 11-year-old daughter, Madison, practices her tap dance routine. (“Who taps with that view?” her mother says, shaking her head at the beauty of Goose Rocks.) The deck helps the house feel much larger than it is, Lisa says, as do the many large windows with minimal muntins. Despite the fact that they started with a smaller lot size, the thought-out layout has paid off. Neither too big nor too small, the home comfortably fits the whole family—and more. “Now that we’re in it, we love it,” says Lisa. “It’s just right.” 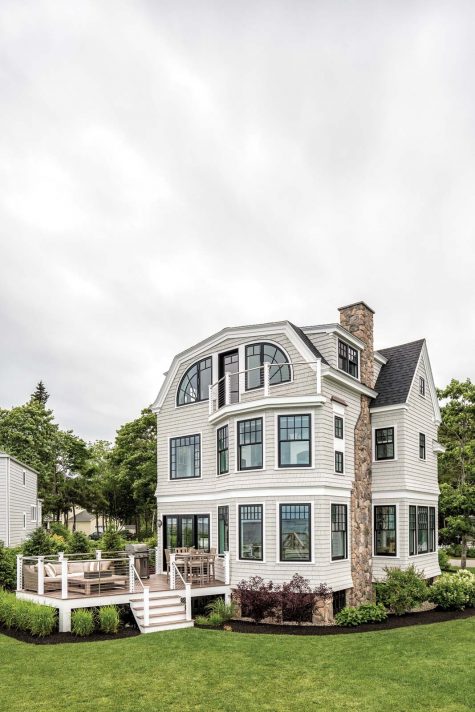 Designed by Peterson Design Group Architecture, the 1,672-square-foot house features custom-made Pella windows, which are black on the outside and white on the inside. “I wanted to keep the interior clean and light,” Lisa says. “Black window sashes wouldn’t have worked on the inside.” The landscape design is by Kennebunkport’s CL Design and Landscape. 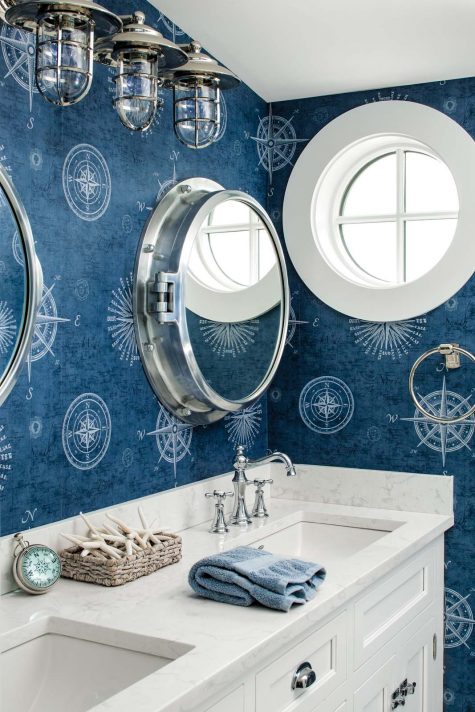 A bathroom with a nautical theme has lighting by Restoration Hardware. 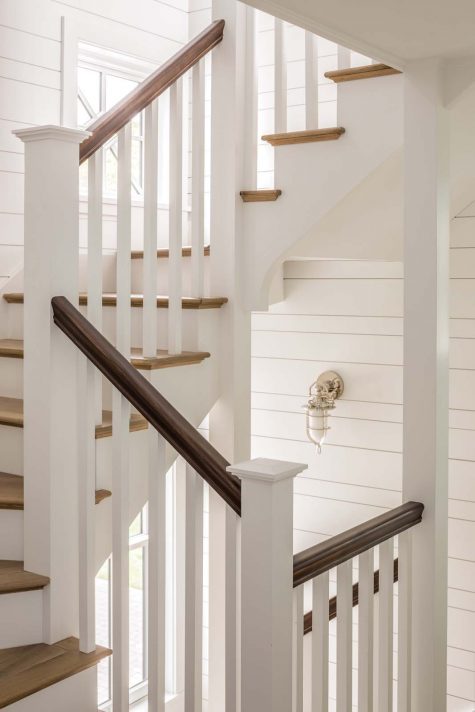 The house is built around a central stairway that connects its three floors.