A growing family in Yarmouth teams up with Brush and Hammer and Samantha S. Pappas to create a dreamy open space 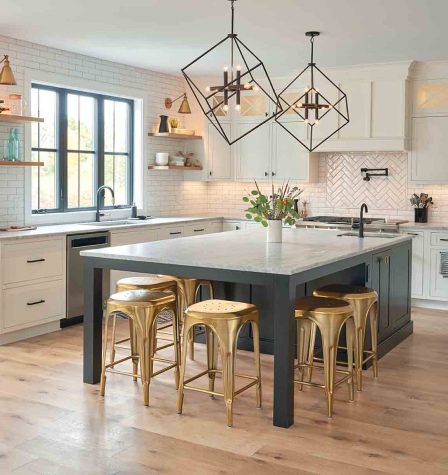 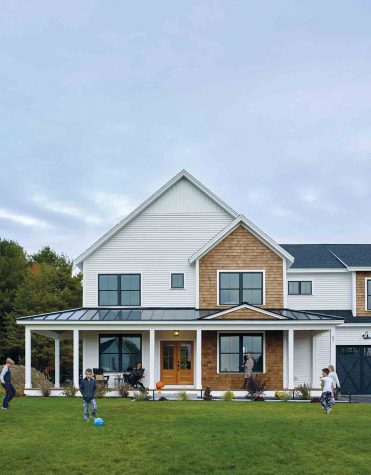 It took a bit of searching to find the perfect countertop slab, but this leatherette-finished quartzite from Boston Granite fit the bill. Designed and built by Brush and Hammer, the home is a contemporary twist on the classic farmhouse, complete with a roomy wrap-around porch and gabled roofline. 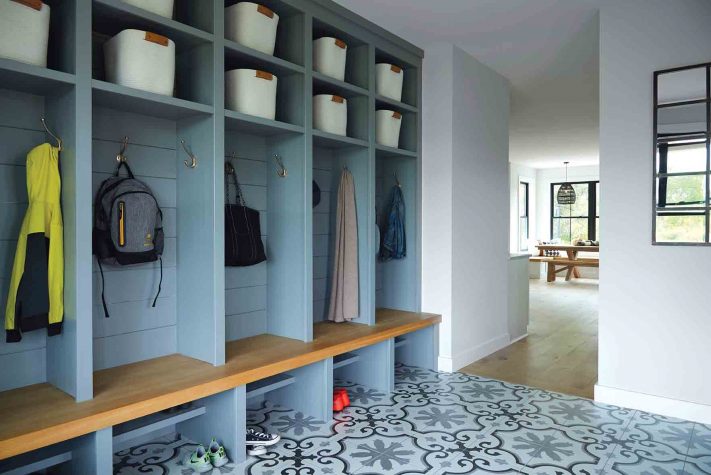 The mudroom includes lockers for each family member to store their stuff. Pappas sourced the tile from Wayfair. 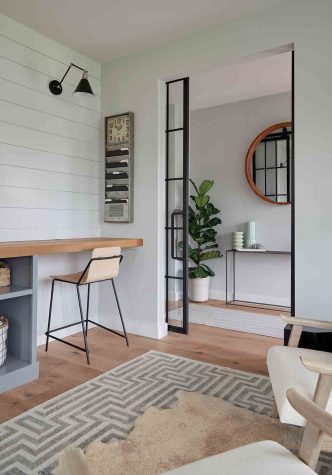 The home office is more important than ever. This space has an area for the kids to do their homework (and remote learning) as well as space for the parents to work. 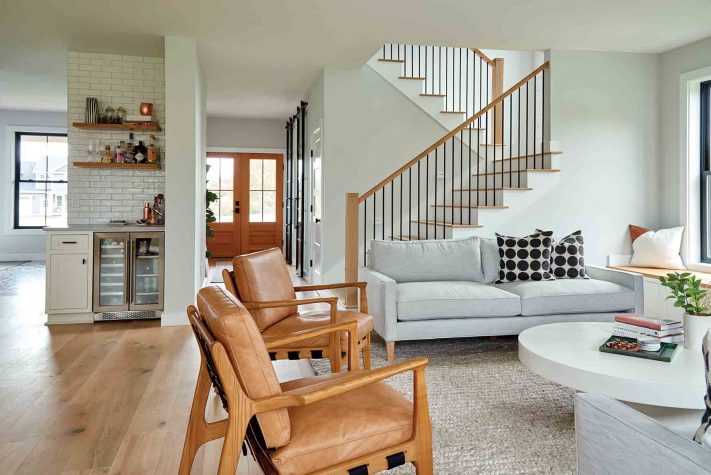 Requia’s designs are inspired by his years in California, where open floor plans are the order of the day and big rooms dominate the scene. To make the space feel cozy, Pappas brought in couches from Maiden Home, custom-made pillows covered with Schumacher fabric, and an appealingly textured rug from Serena and Lily. 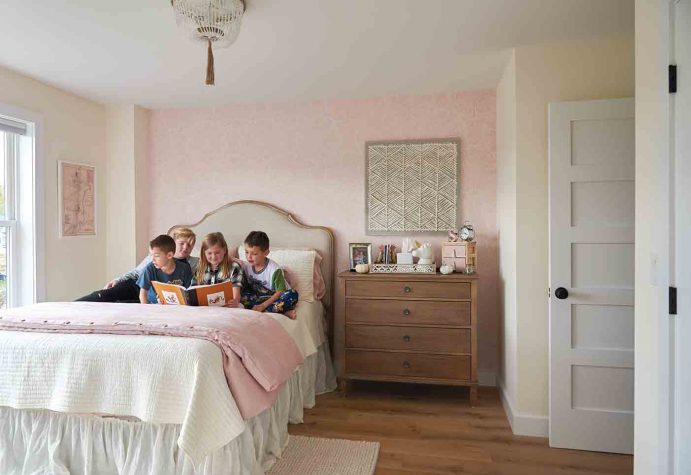 While neutral tones dominate the communal living areas, the only girl in a family of boys needs a little sanctuary of her own. 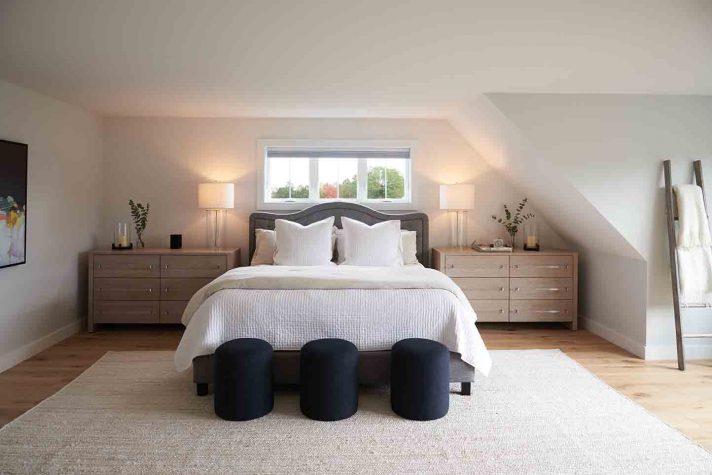 The owners’ bedroom is filled with subtle texture, from the faux-grasscloth wallpaper to the jute and cowhide rugs and the leather floor cushions. 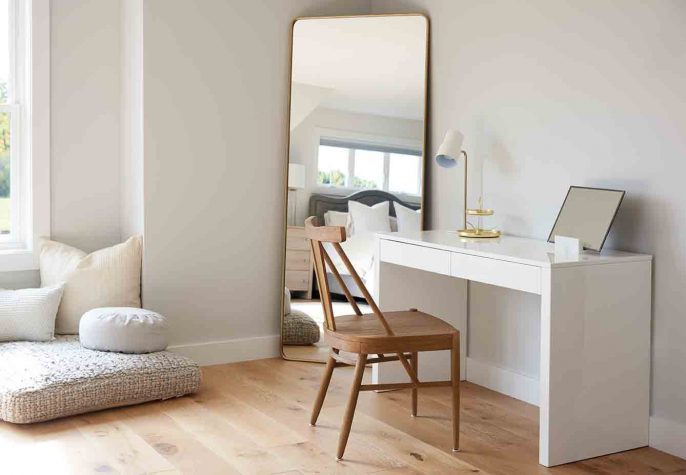 Pappas found this minimalist desk at CB2. It serves as both a vanity and a workspace. 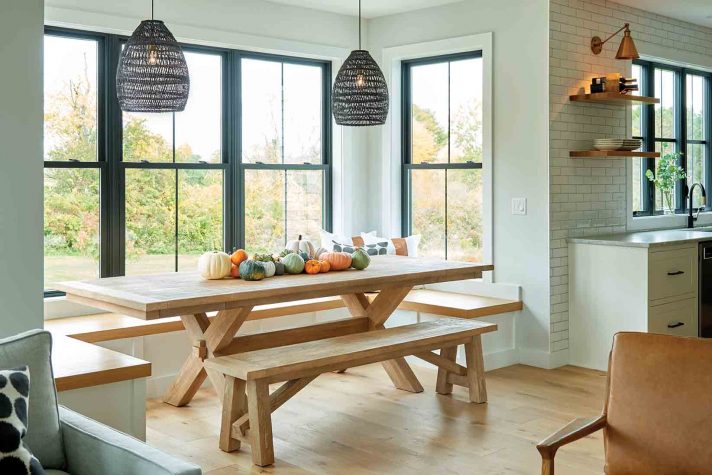 The big farmhouse table from Pottery Barn sits in the dining nook off the kitchen. 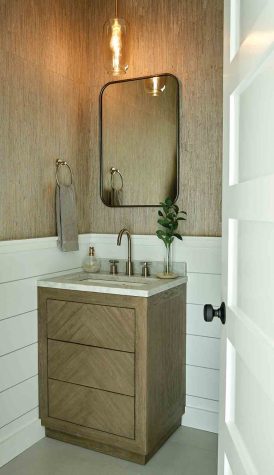 ove). To create a sense of differentiation between the two rooms, Pappas added faux-grasscloth wallpaper to this bump-out. The downstairs powder room has metallic grasscloth wallpaper from Seabrook Wallpaper, a Pottery Barn mirror, and a vanity from Restoration Hardware.

It’s often said that the kitchen—not the living room, not the dining room, and certainly not the bedroom—is the heart of every home. If that’s true, then the kitchen island in C.J. Vose’s Yarmouth home is the house’s left ventricle. It’s the center of the center, the strongest chamber of the heart. Creating it took special attention and materials. “We had to reinforce the island with steel,” reveals Anthony Requia, co-owner of the Portland-based real estate development firm Brush and Hammer. “Because of how big that slab is—it’s about 1,000 pounds—we had to get a special reinforcement under the countertop overhang and again underneath the basement.”

It’s a lot of work for an island, but Requia, C.J., and his wife, Christine, are all convinced it’s well worth it. Big islands are something Requia saw frequently when he was living in Los Angeles. It’s an essential part of a good open plan home, he says. “I grew up with those ’90s homes, the Colonial houses with kitchen, dining room, and living room all separated with a staircase right in the middle,” Requia recalls. “It never felt open. My brother and I said, when we start designing, we will focus on big, open floor plans.”

The leatherette-finished quartzite island is an essential part of realizing Requia’s vision for this contemporary farmhouse. This idea appealed strongly to the homeowners, who were attracted to Brush and Hammer’s work because of how their designs blended traditional shapes and structures with contemporary materials and luxury touches to create truly expansive spaces. “For us, it was key that we could have a space in the kitchen where we could all sit down and eat together and have game nights,” says Vose. “People are on the run too much these days, so we try to center things around that island.” Vose helped design the island, insisting that it be open underneath, “like a big table—I didn’t want kids kicking cupboards.” He knew that their blended family, with four school-aged kids, was at risk of trashing a more precious kitchen. “I knew they’d be hammering on that thing, jumping on it, sitting on it,” says Vose. “We thought it would be an easy thing, but it ended up being an ordeal.” Yet, he says, “It’s held up. It’s worth it. It’s been tried and tested.”

In the past six months, families all over the country have been spending more time at home than ever before, which has given Vose a chance to reflect on the house and how it meets their fami-ly’s unique needs. From the beginning, he knew he needed a big house that would accommodate big people (C.J. is 6’ 9”) and growing kids (they have three boys and a girl, aged seven to 13). They also needed to think about privacy. Stepsiblings can be incredible, but they can also be noisy and nosy. Requia took this into account when he was designing the floor plan, which has an open downstairs (with a large mudroom with individual lockers for each family member), a big playroom in the basement (complete with foosball tables), and a suite of upstairs bedrooms and bathrooms that prioritize privacy above all else. “Upstairs, there are no shared walls. We wanted to create separation so everyone could have their privacy,” says Requia. “We wanted the kids to be able to play their music, have friends over, and not bother people in the next room.” The owners’ suite, located above the garage, is “huge, with a spa-like bathroom and a custom-designed walk-in shower,” he explains. “Samantha designed that for C.J.—he is so tall that with a standard shower, water would splash right off his head. You have to think about things like that.”

The Samantha he mentions is Samantha S. Pappas, who owns a fine art and interior design business in Yarmouth. She was brought on early in the project to help refine and clarify the homeowners’ vision and interpret their family style. She worked alongside Vose and Requia to help select everything from faucets and handles (mixed metals throughout the house give it a luxurious contemporary vibe) to furniture (including the performance linen couches in the living room that will stand up to years of abuse from kids and teens). “Right away, from seeing their Pinterest boards and inspiration images, I could tell they liked a somewhat traditional look,” she says. “But they also kept telling me they wanted it to be contemporary. I had to figure out how to match what I was seeing with what I was hearing.” Take, for example, the kitchen. “They wanted Shaker-style cabinetry, but to make it feel more modern, we went with inlay cabinets. Subway tile is very traditional with a herringbone chevron. It’s something you would see often paired with those cabinets, but we made it a bit different by using tile that has a bit of texture and wave to it,” she says. “We also highlighted the straight lines of the large island with open white oak shelving [installed by a local woodworker, Steve Hall] and those big, cool pendants.” While you wouldn’t normally find open shelves in a farmhouse kitchen, it works here, partially because Pappas lit the floating oak with library-style sconce lights—a sharp contrast to the islands’ big geometric pendants. It’s a bit funky and artsy, but “still relatable.” As Pappas puts it, “You can really picture hanging out around that island with your family.”

When the family of six isn’t clustered in the kitchen, they can roam from the basement playroom up to the first-floor office, where there are desks for the kids and adults alike, or to their separate bedrooms. It wouldn’t have been practical to give each of the three boys their own sink, but Christine and C.J. knew it was worth trying to create a bit of space for each kid, so they worked with Pappas and Requia on a custom sink. “It was C.J.’s idea to do a trough sink with three faucets and one big basin,” says Requia. “Samantha found someone to build the sink top and get the vanity custom made. It’s one of those spaces people keep coming back to when they see it in pictures—it looks so modern and cool.” Pappas explains that she chose concrete as a material for this object because it gave it “a bit of edge that you don’t see in every farmhouse.” The floating vanities, too, felt slightly more contemporary than grounded ones. “They work in that space,” she says.

Pappas also notes that it would be easy enough to switch out the vanities, especially in the “princess bathroom” (as Requia calls it) that she created for Christine’s daughter. “Samantha is so good at bringing in those soft touches, like that light pink paint and the beautiful wallpaper,” says Requia. “I wanted it to feel very feminine, but also be a space that she would be proud to show her friends as she becomes a teenager,” explains Pappas. And once the kids are out of the house and at college, she notes that this bathroom “could even transition to a guest space easily. You could keep the marble floor, switch out the mirrored vanity, and it would look like a whole different space.”

Although there are some eclectic touches, like the bone inlay mirror in the girly bathroom and the concrete coffee table in the living area, the house as a whole feels incredibly cohesive. This is partially due to the fact that nothing was brought in from their previous homes and condos—everything was picked out for this house, this new iteration of family. The process, Vose says, “was awesome.” He had built several houses before, so he knew the problems that could arise along the way. “This time, it worked so well,” he says. “The team provided what we needed to make the whole process and the whole project over-the-top. We didn’t always see it when we were in the middle of the build, but once it came together, it all worked. We saw it.” It is, he says, a bit like skydiving: “You just have to take a leap and trust.” 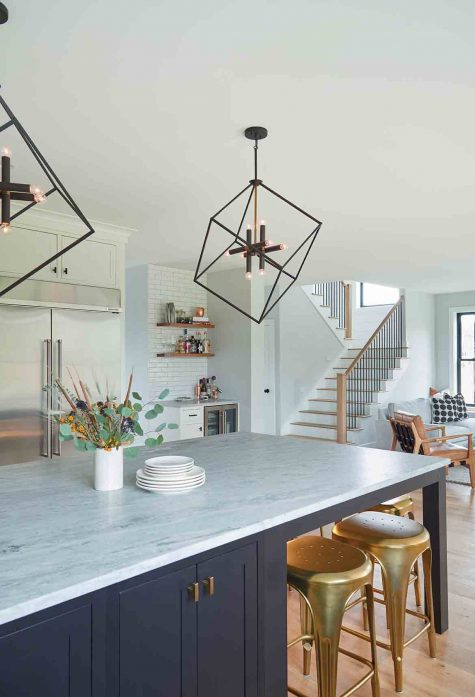 The kitchen layout and cabinetry were designed by Maine Cabinet Company and enhanced by Pappas and Requia. Hardware came from Hook and Knob, tile from Home Depot, and Pappas found the pendants at Shades of Light. 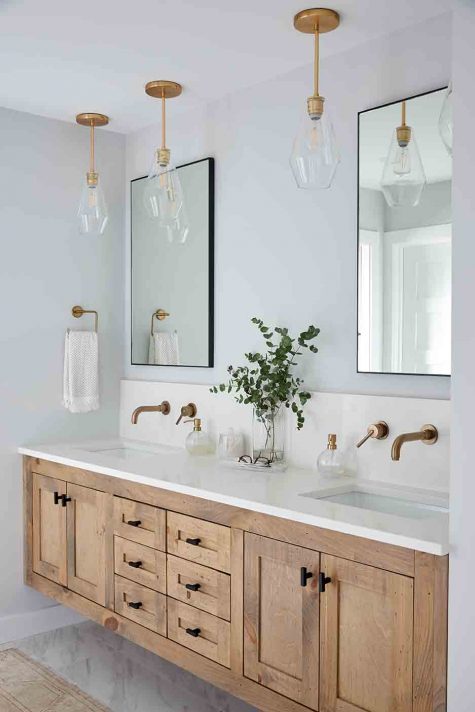 The homeowners’ en suite bathroom features a custom vanity from Limitless Woodworking, Delta faucets and shower fixtures, mirrors from CB2, and West Elm pendant lights. Pappas wanted this space to be calming and neutral, but with a hint of luxury. 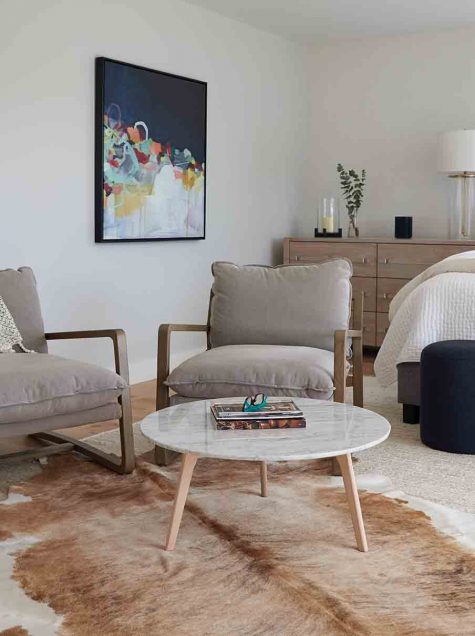 A seating area at the foot of the owners’ bed gets a burst of color from a large abstract painting, which Pappas found “of all places!” at West Elm.