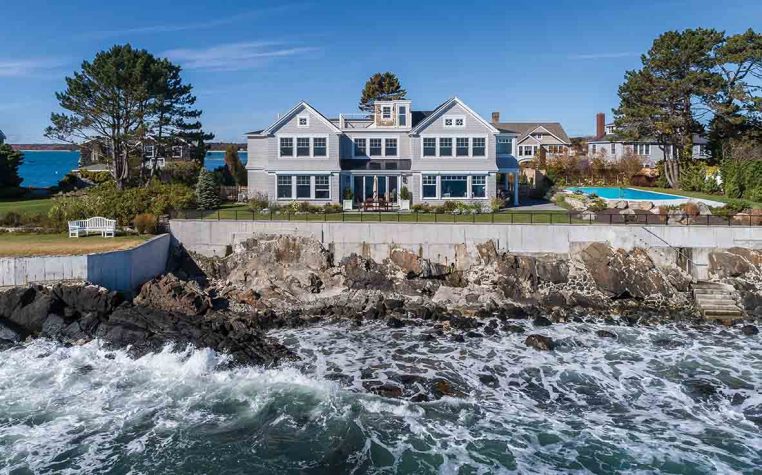 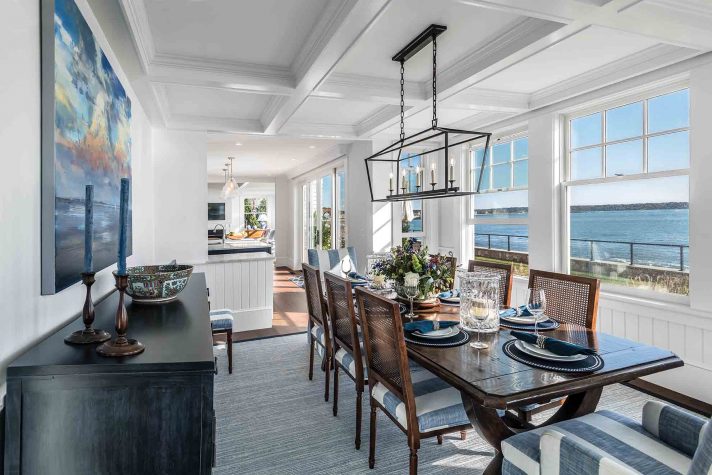 Inside, designer Louise Hurlbutt conceived a classic blue-and-white scheme that complements the dramatic ocean views. Cane-back dining chairs from Hurlbutt Designs surround a cherry table that was custom made in England, while a painting by Craig Mooney mirrors the vista. 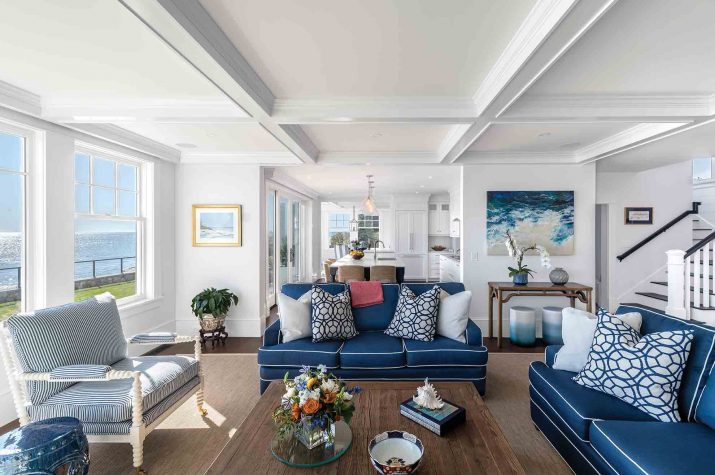 Architect Rob Freedman designed an open plan that maximizes the views, with the living room, kitchen, and dining room lined up for optimal entertaining. “You can see from one end of the house straight across to the other,” says Freedman. “It makes the space feel larger than it is.” Antiques and artwork from the original house are scattered throughout the new one, including the watercolor on the left wall. On the right wall is a beach scene by Kathy Ostrander Roberts. 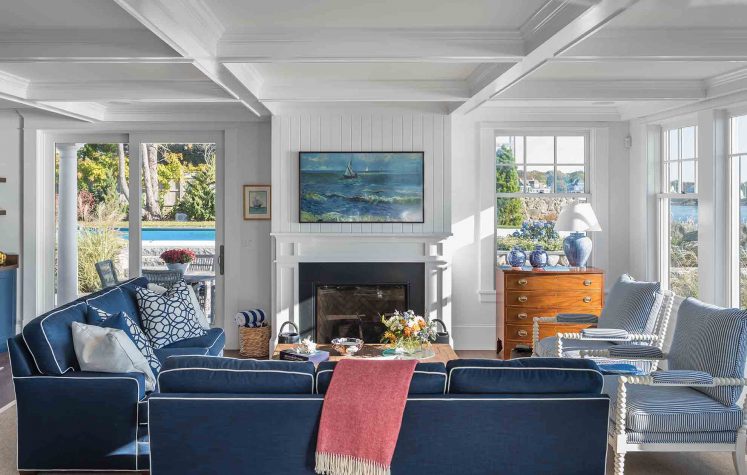 The blue-and-white scheme is carried through to the living room, where family heirlooms include a seascape painting above the fireplace, a mahogany chest of drawers by George Hepplewhite, and Chinese Imari bowls. 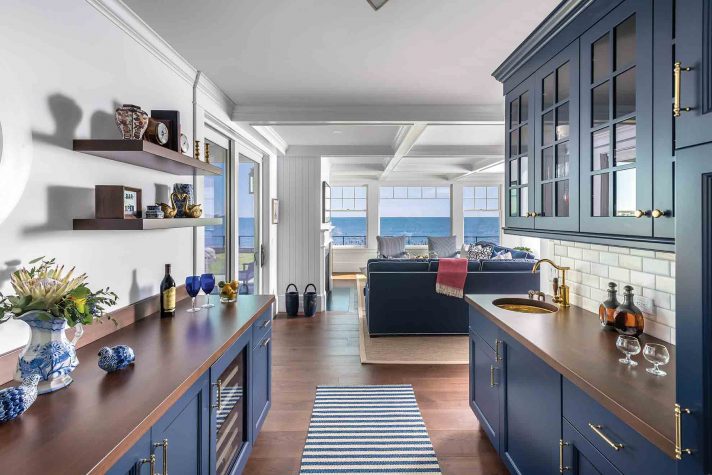 Adjacent to the living room is a bar area outfitted with Sylco Cabinetry and walnut countertops. 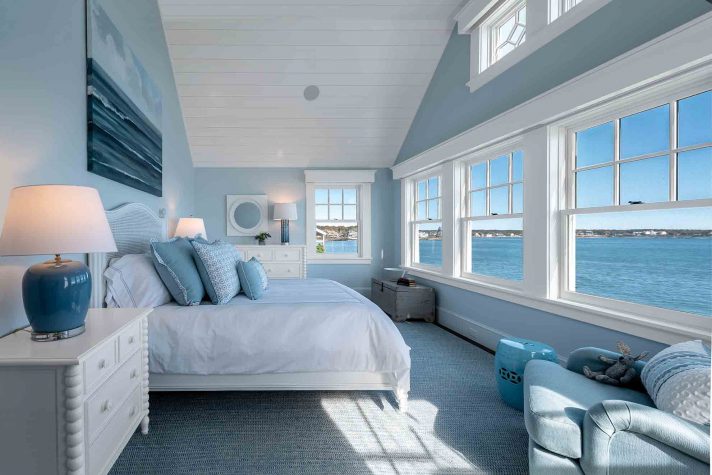 The serene owners’ bedroom is painted in Sherwin-Williams’s Rarified Air. 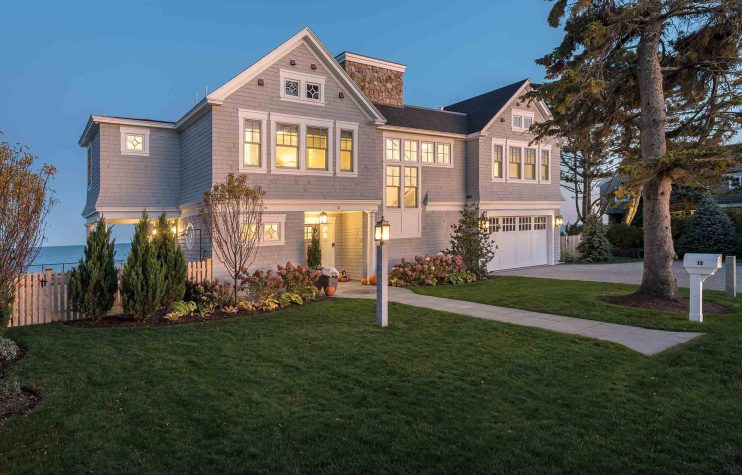 Designing with a tight buildable envelope was a challenge, so Freedman used every inch available to maximize the views. 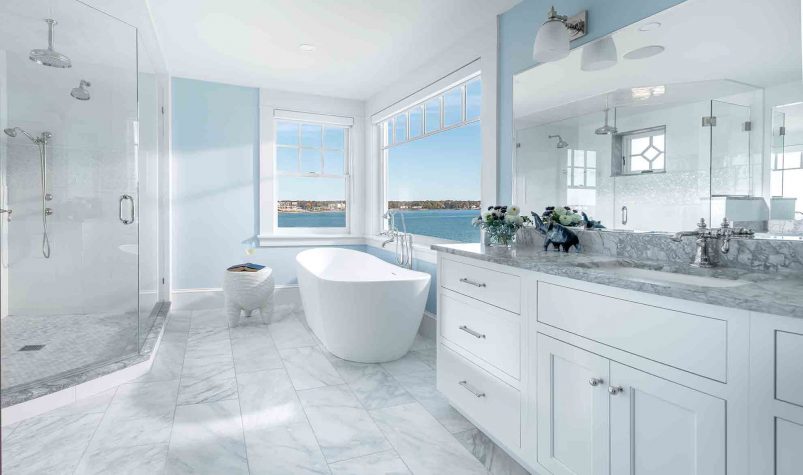 Sherwin-Williams’s Rarified Air is carried into the owners’ bath, which features Carrara marble flooring and countertops and a soaking tub from Signature Hardware. 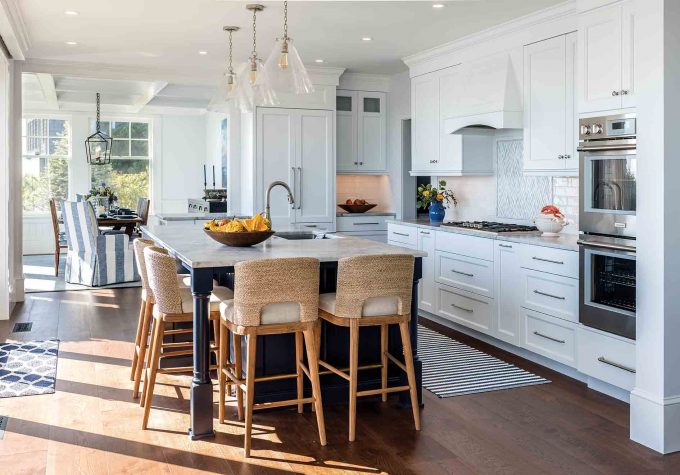 In the kitchen, which is open to both the living and dining rooms, a blue island and white cabinets from Sylco Cabinetry are topped with honed granite from Morningstar Stone and Tile. 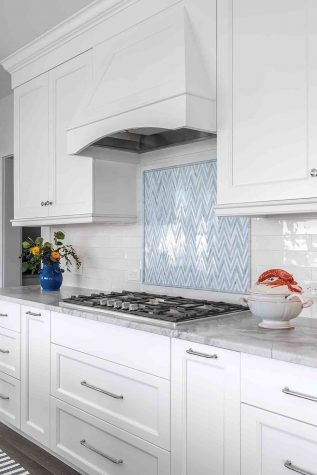 Carrara marble tiles form a herringbone-patterned backsplash in the kitchen. 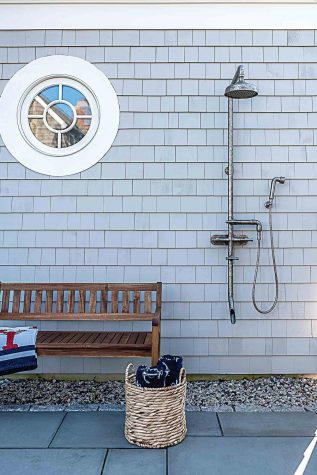 An outdoor shower by Sonoma Forge includes a lower spout for washing off sandy feet. 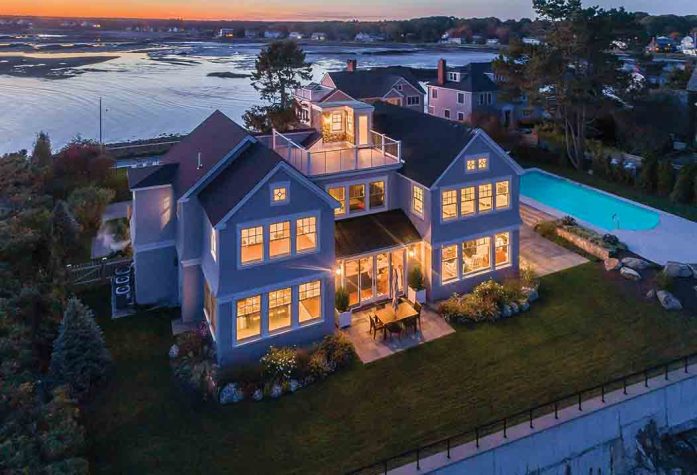 It wasn’t an easy decision for Paige and Chris Hill to tear down their early twentieth century shingle-style house on Kennebunk’s Lords Point and start from scratch. On the contrary, they had every intention of preserving the beloved oceanfront residence that was home to Paige’s late grandparents. “I spent every summer there for as long as I can remember,” says the Florida-based Hill, “so it was a very special place with a lot of memories.” The idea of rebuilding came up a few years ago, when Hill decided that she wanted to update the kitchen. “After Chris and I spent the first summer there alone, after my grandmother had passed, it became clear that the house needed some work,” she says. But when Hill met with local builder Tim Spang about the kitchen, he broke the news that the more pressing issue at hand was their eroding sea wall. “My new kitchen turned into a new sea wall, which is way less exciting!” Hill jokes. Clamoring to get going on the kitchen the following year, Hill called in a design team, only to be thwarted once again. “Everyone who looked at the house told us that fixing it would be a disaster and we were much better off starting over,” explains Hill. According to Spang, it would have been much more costly to renovate the original house—which was neither winterized nor had a proper foundation—than to rebuild. “It was a heartbreaking choice that we deliberated over for quite a while,” says Hill, “but we ultimately felt that, rather than putting on a few temporary patches, we should rebuild for the sake of future generations.”

With the tough decision behind them, the Hills were determined to make the most of the situation and create the home of their dreams, which required getting Kennebunkport-based Spang Builders back on the job, along with architect Rob Freedman of Kennebunk River Architects and interior designer Louise Hurlbutt of Kennebunk’s Hurlbutt Designs. “The original structure was choppy and not conducive to our way of living,” says Hill. “We wanted a place where we could entertain that was family-friendly, comfortable, and open to the views.”

Freedman, with the help of his partner, architect Mike Bedell, began drafting a plan for a four-bedroom contemporary shingle-style residence occupying 3,500 square feet—the maximum size allowed per a zoning restriction that required the new structure to be no more than 30 percent larger than the previous one. “The tight buildable envelope was definitely a challenge,” says Freedman, “but we tried to take advantage of every inch of width we had to work with in order to maximize the ocean views.” To that end, the architect conceived the main floor with the living and dining rooms anchoring each end and the kitchen in between to serve as “the command center” (the kitchen also has access to a separate pantry and a combination laundry and mudroom). “While the house isn’t huge, it feels bigger than it actually is because the first floor has great flow, nice proportions, and no hallways that eat up space,” explains Freedman. “You can see from one end of the house straight across to the other.” And the fact that visitors are presented with a straight view out to the ocean upon entering doesn’t hurt, either.

Freedman also took care to craft a graceful transi-tion between floors, installing a playful array of windows in the stairwell that look out onto the cove side of Lords Point. Upstairs, a media room that doubles as an office for Chris can be closed off with a barn door for privacy. Four bedrooms—including a dramatic cathedral- ceilinged owners’ suite—round out the upper level, which saw multiple iterations during the design phase. “There was a lot of reworking, including some last-minute changes even after we broke ground,” explains Hill, who gave birth to the couple’s now two-year-old son, Hayes, just a week before Freedman started drawing up the plans. “Things were a bit hectic around here!” she laughs. “It dawned on me in the middle of the night that each bedroom should have its own bath, so we ended up redoing most of the second floor in order to accommodate that. We don’t plan on ever selling this property, so we felt a lot of pressure to get it exactly right.” Ultimately, the extra time it took to tweak the floor plan paid off. “Now the house is perfect,” says Hill. “You have an amazing view of the water from wherever you are.” Freedman adds, “We nailed down the best solution despite not having as much space to work with as we might have liked. Each time we refined the design, we’d have to recalculate everything to make sure we were staying within the zoning constraints.” In lieu of a third level, as initially planned (“We simply ran out of buildable volume,” explains Freedman), a roof deck boasts expansive 360-degree views. According to Spang, the deck was a fine compromise. “When you’re up there,” he says, “you’re in your own little world.”

It wasn’t always picture-perfect vistas and smooth sailing for Spang, though. The builder, who has worked on 13 of the 14 houses located on Lords Point, knew his crew was in for quite the challenge, from renovating the entire sea wall, to excavating the old house, to constructing an entirely new structure on the narrow strip of land dubbed “Popsicle Point” because of its treacherous winter weather. “At high tide, the sea is just 30 feet from the house,” says Spang. “The weather on the point is drastically different than it is 1,000 feet inland, so it requires keeping a strict timeline in order to avoid the worst of it.”

Back inside, Hurlbutt, who had been a friend of Hill’s grandmother, worked her magic. “Louise was perfect for the job,” says the homeowner. “She’s known for her great use of blue and white, and that’s just what I wanted.” Inspired by the home’s natural surroundings, Hurlbutt devised a simple palette of blue, gray, beige, and white, avoiding “busy patterns that would conflict with the views” as well as the typical nautical references often found in seaside vacation houses. Ironically, “you actually feel like you’re on a boat when the sea is rough,” says Hurlbutt. In an effort to carry the spirit of the original house into the new one, the designer incorporated some of Hill’s grandparents’ antiques and accessories into the design scheme. “It was important to keep some of that heritage intact,” explains Hurlbutt. In the entertaining prep area off the living room, for example, the wood-topped wet bar is an homage to the wood bar in the former residence. There, Hill proudly displays the bar tools that once belonged to her grandfather. “We felt horrible about having to tear the house down, so we wanted to respect the past as much as possible,” says Hill.

Hurlbutt created a nice balance of contemporary items and antiques that still feels “youthful and low maintenance,” says the designer. “It’s kid-friendly and unfussy—a place where they can put their feet up and relax with their son. Some clients are strict about their wants and needs, but this project was a true collaboration among all of us. And those are always the best jobs.” Spang agrees, explaining how critical it is to listen to the client’s opinions: “If the homeowners feel like they played a significant role in designing their own house, they will enjoy it more.” And Hill couldn’t be more thrilled with the outcome, admitting that it wouldn’t have been possible if not for Hurlbutt, Spang, and Freedman. “We definitely had the dream team working for us.” 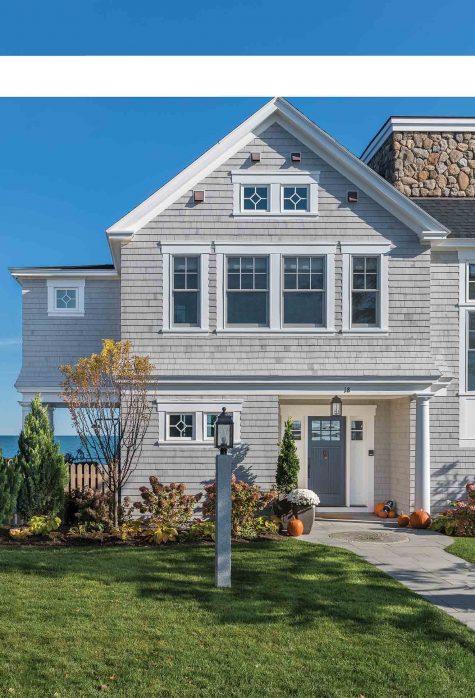 On the exterior, Freedman manipulated subtle details, such as the scale and placement of trim and the depth of the roof in order to bring down the scale of the facade and create interesting shadows. 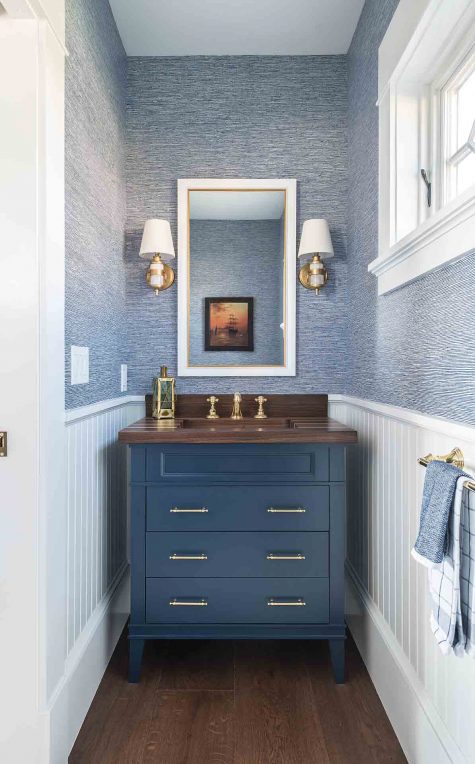 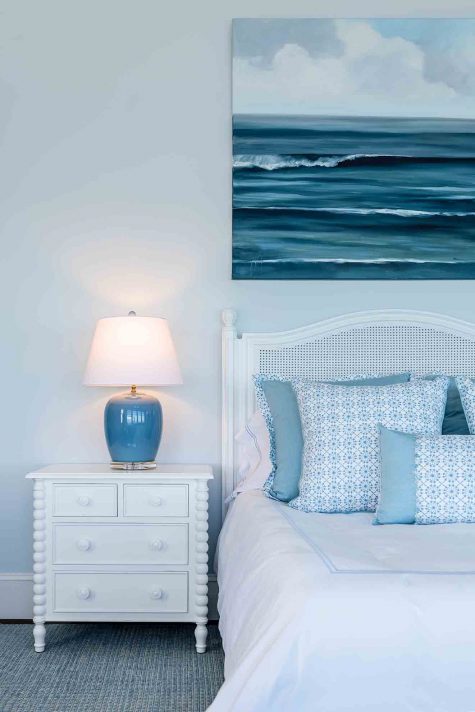 Artwork by Jill Matthews hangs in the owners’ bedroom.