Transforming a Traditional Maine Farmhouse into a Modern Family Home 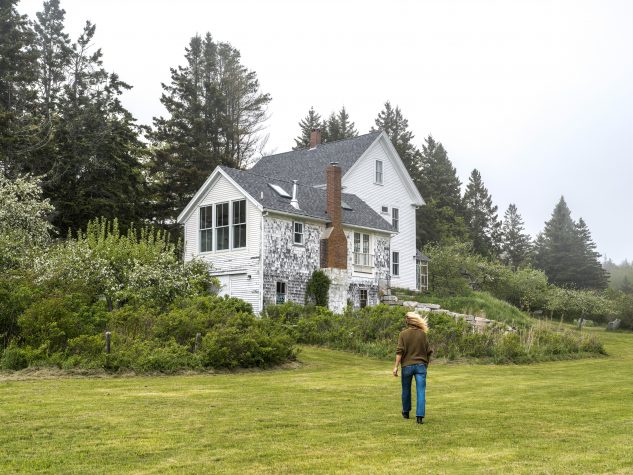 Designer Christina Salway walks toward her renovated Cape Rosier home. With 12 acres overlooking the ocean, this property was the ideal place for the Salway-Moskowitz family to wait out the pandemic. 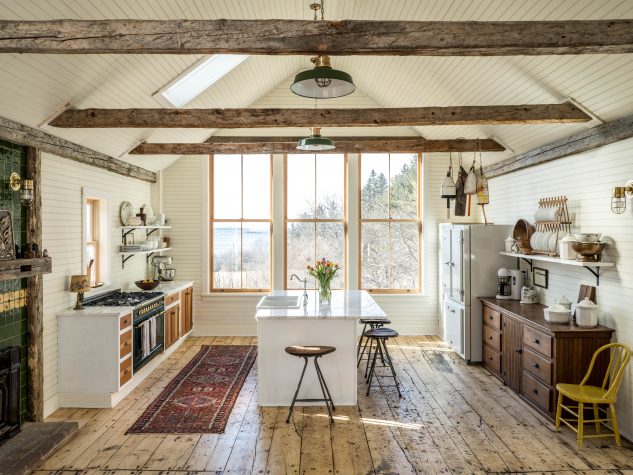 “I’m on a green tear,” says Salway about the emerald tiles that surround the woodstove inset in the kitchen. Green pendant lamps hang from original beams above the white-marble-topped kitchen island. 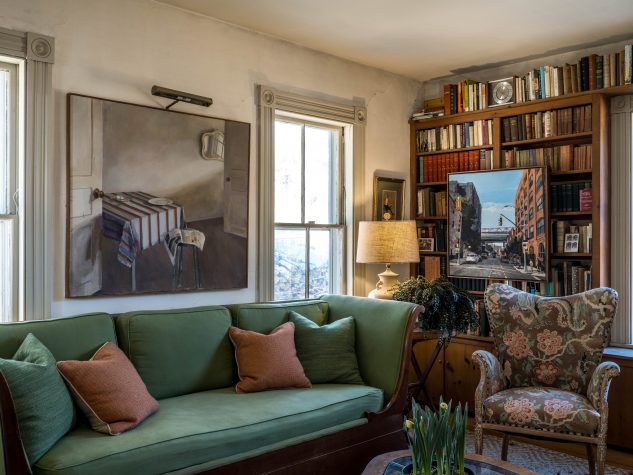 One of the best things about the old farmhouse is its history: it once belonged to poet Daniel Hoffman. The living room is still stocked with his books. “With the fire going, it’s so cozy and snug,” says Salway. The designer also brought in paintings by Bonnie Miller, Aaron Hauck, Sara Moffat, and Jenny Brillhart to add depth and color to the space. 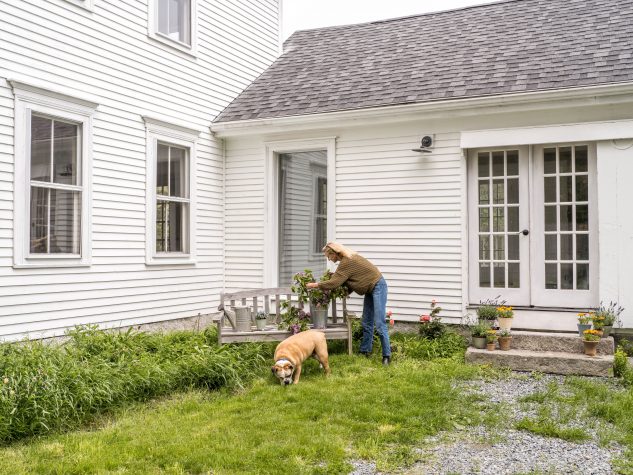 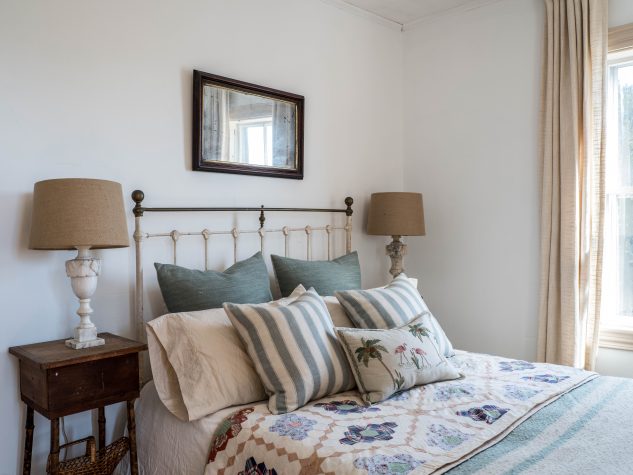 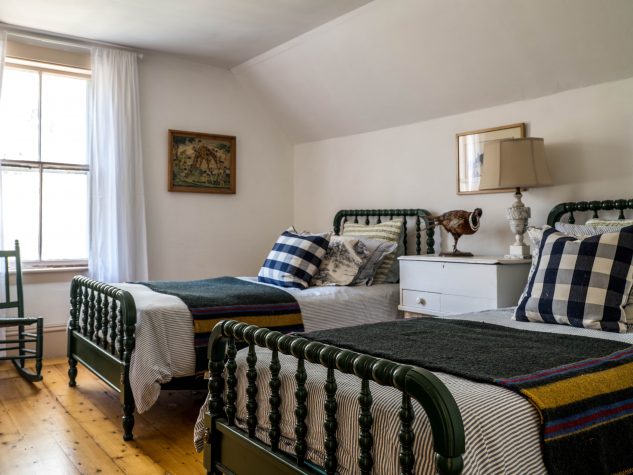 Black-painted furniture gives weight (and a classic Americana look) to the upstairs bedroom. 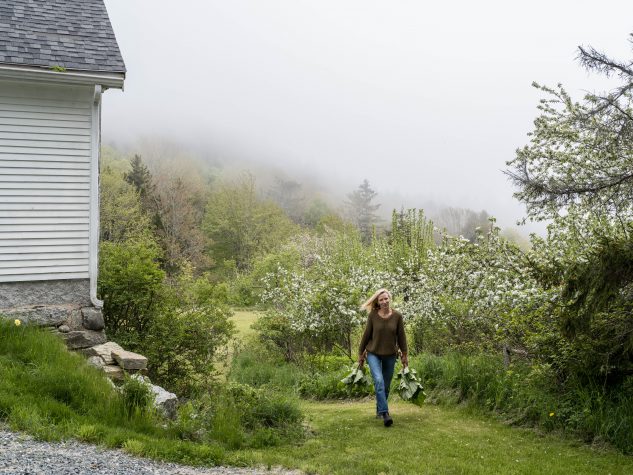 “When we bought it, the gardens were all overgrown and entangled, which was a perfect encapsulation of the house itself,” says Salway. Now, the house is rejuvenated and the rose bushes are tamed—somewhat. 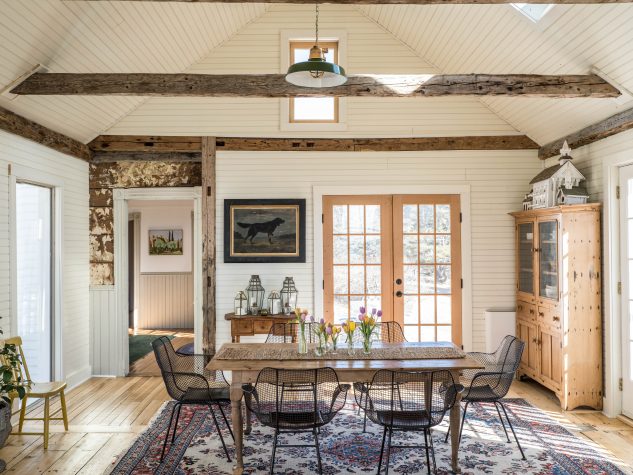 Like many New England farmhouses, the structure was lean on windows and doors. It was built to keep heat inside. Now, there are doors and windows aplenty, plus modern insulation and woodstoves to combat the chill.

“The story of the house…” begins Christina Salway. Then she stops. “Well,” she says, “it’s a magical house.” We both know how this sounds. Most people think their house is special. But this old farmhouse that is special to Salway, was also very special to the family who came before. “It used to belong to U.S. poet laureate Daniel Hoffman,” she explains. “He owned it for 50 years, and his family came up every year for the entire summer.” He had a library here, and he wrote here too—poems about shells and stones and grief. (His wife, poetry editor and writer Elizabeth McFarland, had preceded him and was buried nearby.) When Hoffman passed, the home went to his children, who were unable to care for it “the way it needed to be cared for,” says Salway, so they put it on the market.”

Salway and her husband, John Moskowitz, saw the house in 2019. “Don’t get your hopes up,” the real estate agent told her. “So I wrote a letter,” she recalls. “I jokingly called it a love letter to the house.” Hoffman’s children didn’t want the house to be knocked down, and Salway assured them that wasn’t her intention. She wanted to give it new life. It had stood empty for a decade. The roof had sagged and fallen, the floorboards were worn down, and it could really use some windows, Salway explains. And so Salway and Moskowitz got to work.

It was familiar labor to the couple. Salway is the owner of Eleven Two Eleven Design, not to mention something of a celebrity designer. She’s appeared on multiple home improvement television shows, and her work has been featured in a dozen different publications. Moskowitz, her husband and building partner, says working with Salway has taught him to embrace the motto of improvisational actors everywhere: “yes and.” He says, “There might be an instinct for me to be like, you can’t do it that way. Her answer is always, why not? Or, watch me. I’ve learned to trust her instincts.” Since they’re both drawn to old, sagging, neglected houses, they’ve developed an appropriate family motto. “Level enough,” jokes Moskowitz.

The Cape Rosier house is now level enough— it’s also open enough, airy enough, and light enough. The original structure was terrifically pragmatic, with small windows and rooms. “All of it was designed to facilitate farming, not to enjoy the vista,” says Salway. “It had an extraordinary view. But Mainers are so practical. This house is no exception.” The couple, formerly of Brooklyn, New York, decided to move to Maine in 2019 full-time, enrolling their son in school and settling into a slower pace of life on the peninsula. “COVID happened, and it was an extraordinary thing to be in this safe, insular place during the pandemic,” Salway says. “We spent the next two years in the house, renovating it during the time of COVID.” They threw themselves into the work. They painted. They tiled. They got out their pruning shears to tame the overgrown Rosa rugosa garden. And they cut a bunch of holes in the walls.

Where there had once been an “itty bitty” open square at the end of the post-and-beam barn, the couple added three oversized windows, plus skylights cut into the roof above. But more important, they shifted the flow of the house so that the ocean-facing barn wasn’t a storage space gathering dust bunnies. Now, it’s a graciously sized kitchen and dining room, complete with an iron stove insert surrounded by emerald green tiles, a white-marble-topped island, and two sets of French doors that open onto the bluestone patio with a brand-new hot tub and views of the Atlantic. “I wasn’t sure about the hot tub at first,” admits Moskowitz. “We’re not really spa people. But we became devotees. We sat there all winter with just our eyes protruding from the water, looking at the ocean and the stars.”

That alone sounds plenty magical, but the couple made a few more improvements to the poet’s old retreat. One of their unexpectedly successful spaces is the so-called “big hallway.” In the room where the dining table once stood, Salway decided to create a sitting area. It’s not a living room (they have a cozy living room where they tend to congregate in the evenings), and it’s not a game room or a play space. It’s an oddly archaic room that Salway says “makes the whole house feel so grand.” Moskowitz was surprised to see how often he found himself relaxing in one of the two big armchairs, drinking coffee and looking out at the back orchard. “During the day, we go where the light goes,” he says. “It’s such a light and airy space.”

Another surprise came in the form of a cast iron bathtub that Salway spotted sitting neglected in the yard of their local plumber. The beautiful vintage piece was half-hidden by a weathered tarp. “I called him up, and he sold it to me for a song,” she says. It took four men to get the tub up the stairs and into the couple’s newly created en suite bathroom. Fittingly, it sits beneath a light fixture that Salway pulled from the trash on the streets of Paris. “I saw a chandelier poking out of a bag, and I took it home in my suitcase,” she says. “It still had all its crystal prisms.”

The chandelier is one vintage touch among many. “I wanted it to feel like a renovation that had been done 75 years ago,” Salway says. “That’s her magic touch,” adds Moskowitz. Instead of bringing in new wood, they used the original beams and flooring whenever possible. In place of closets, they used pine armoires. Pine shelving also reflects the knotty old-school aesthetic. While white walls dominate, the couple brought in plenty of green furniture to add visual texture, and gold-framed mirrors bring a little gilded warmth to the living room and the bathrooms. “I’m a firm subscriber to antique stores, thrift stores, Brimfield,” Salway says. “I think there’s a particular experience you create in a home when you bring old, new, used, found objects all together. It feels lived in. It feels created rather than bought.” It was essential that the house feel comfortable and welcoming, a place where you can “leave your shoes on,” says Moskowitz, “or put your feet up.”

But despite their appreciation for the finished farmhouse, the family has decided not to stay. In 2022 they sold their repaired refuge and bought a smaller place nearby. Although they are sad to leave the Cape Rosier farmhouse, they’re excited to begin working again, and Salway is satisfied with how they’ve left the place. New people will be moving in soon, owners who can make their own mark. As Hoffman wrote in his melancholy 1965 poem titled “Entering Doorways”: “Strain toward the doorway / To the next room / Entering doorways / Exchanging rooms.” 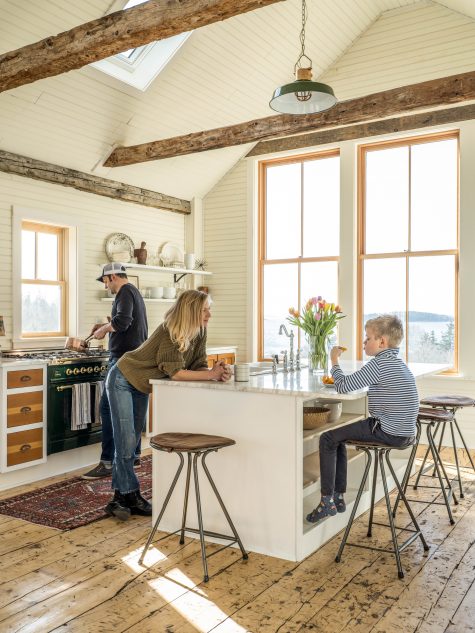 When they first purchased the old house, this sunlit kitchen was a post-and-beam barn with an “itty bitty window” that overlooked the ocean. “That’s what drew us to the house originally,” Salway says. 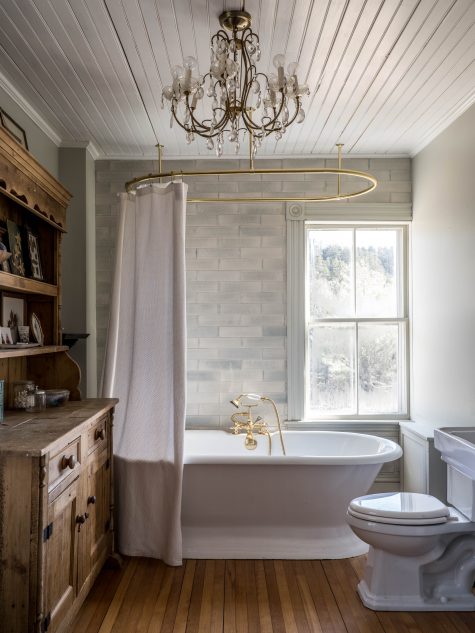 In the owners’ suite bathroom, a cast iron tub sits below a chandelier Salway picked up on the streets of Paris. 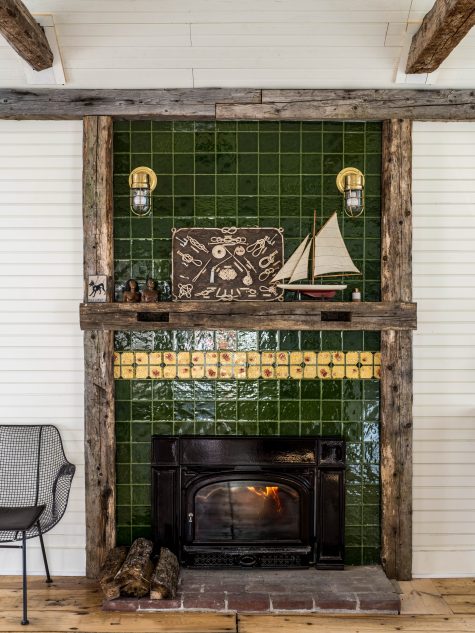 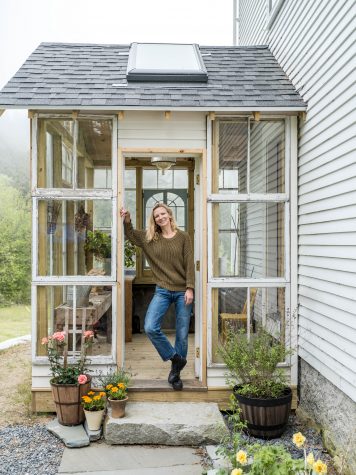 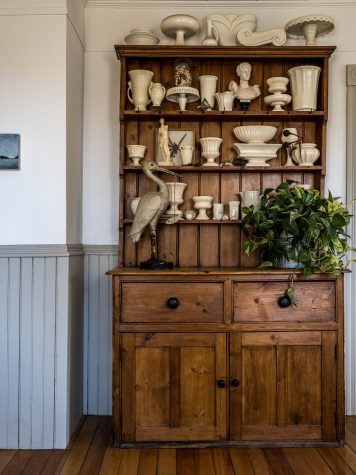 “We used pine armoires instead of closets,” explains Moskowitz: “Pine armoires, pine cabinets, pine shelves. We repeated that throughout the house. It feels simple and true to the farmhouse aesthetic. It also resonates with the simple, wide-plank pine floors.” 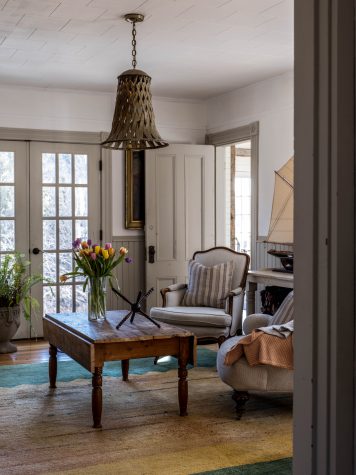 The sitting room has been a surprising success. 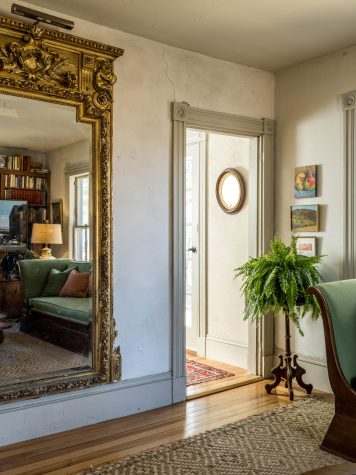 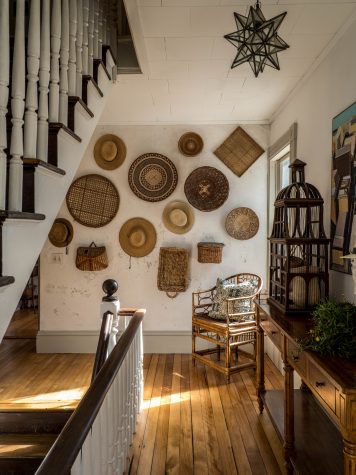 Salway says she’s “drawn to curiosities—not just junk, but interesting objects that are curiously made”; in addition to collecting baskets, she also has a grouping of miniature staircases on display. T 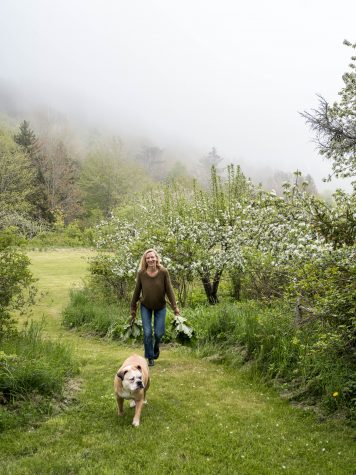