A Scandinavian-Inspired Camp on MDI Keeps it Clean and Simple

Using local materials and a minimalist design, this humble summer home lets the views of Somes Sound do the talking 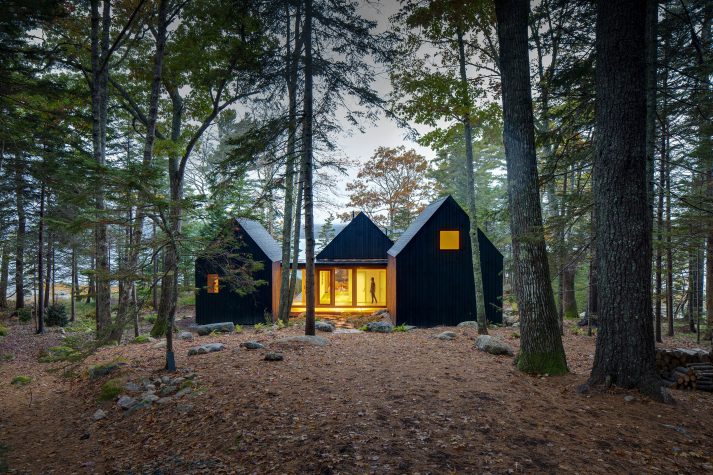 Atkinson Builders erected the home, collaborating with Gillis to define the construction envelope, removing as few trees as possible to preserve the environment. The small deck and steps off the front entrance are intentionally low to ensure one-floor, aging-in-place living. 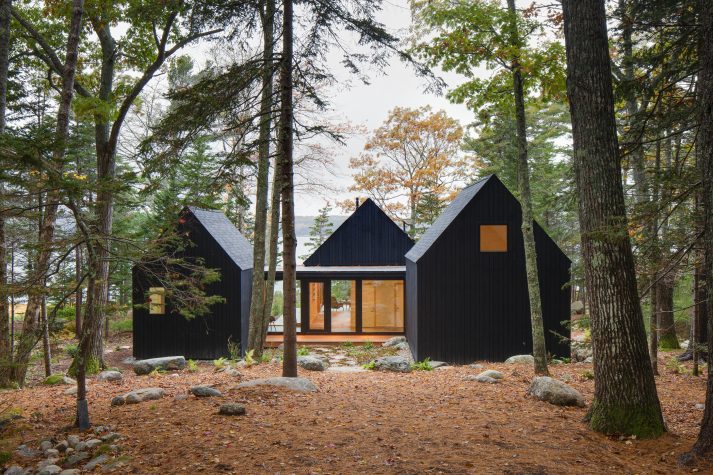 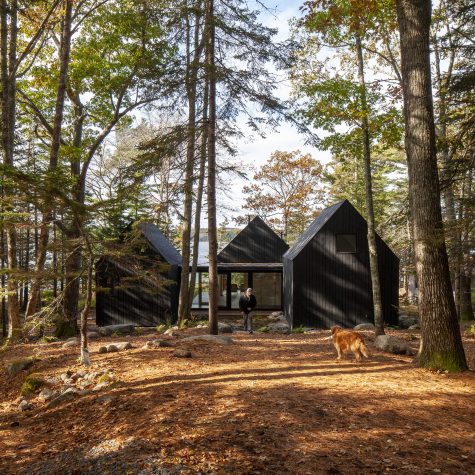 Architect William Hanley and his dog Sonja emerge from the courtyard formed by three connected pavilions at this camp on Mount Desert Island. The structure is made of black-stained, rough-sawn white pine. Landscape architect Mike Gillis built the walkway leading from the courtyard and used indigenous plantings that naturally blend with the surroundings. 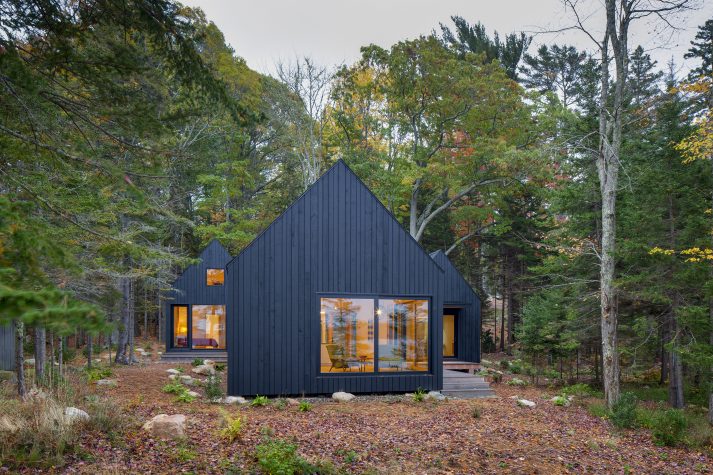 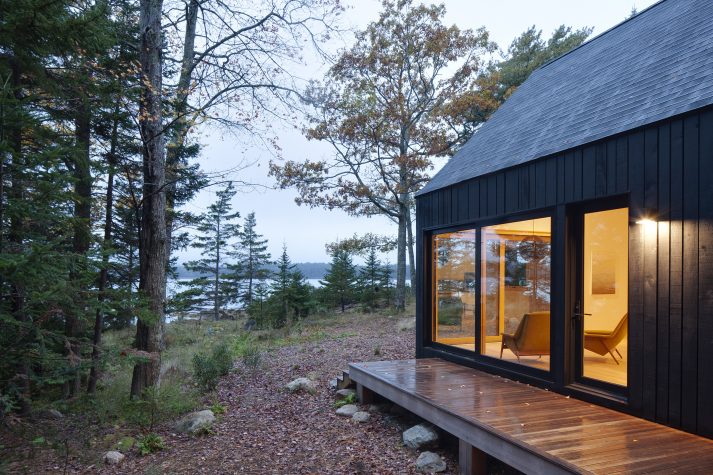 A small side deck off the living room leads out to Somes Sound. 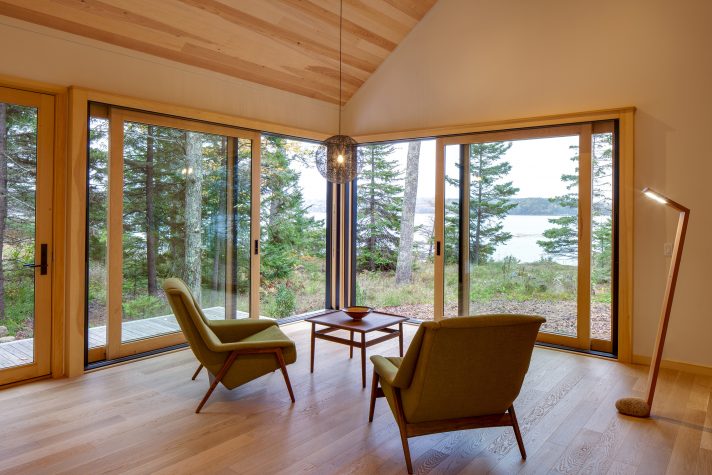 White oak floors from Vermont Plank Flooring run thoughout the house. In the living room, a corner clad in Marvin windows opens to the outdoors. Starter furnishings include a Moooi pendant and a floor lamp by Bar Harbor–based furniture maker Jamien St. Pierre. 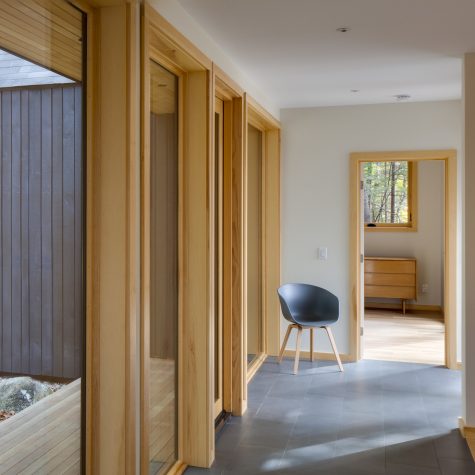 Just inside the front door, a slate-tiled corridor connects the three pavilions of the house. 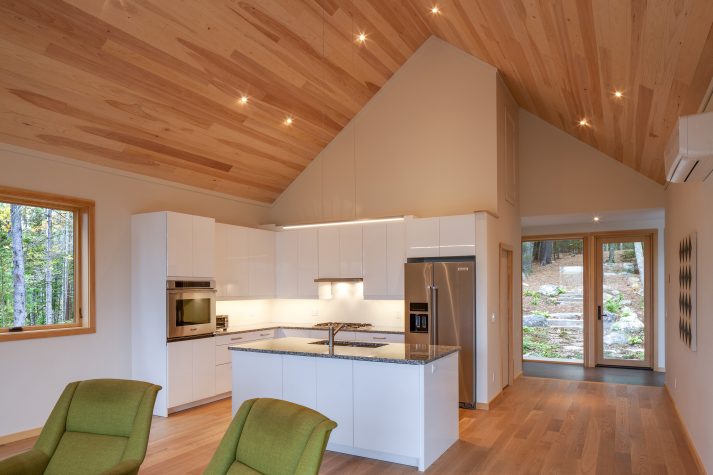 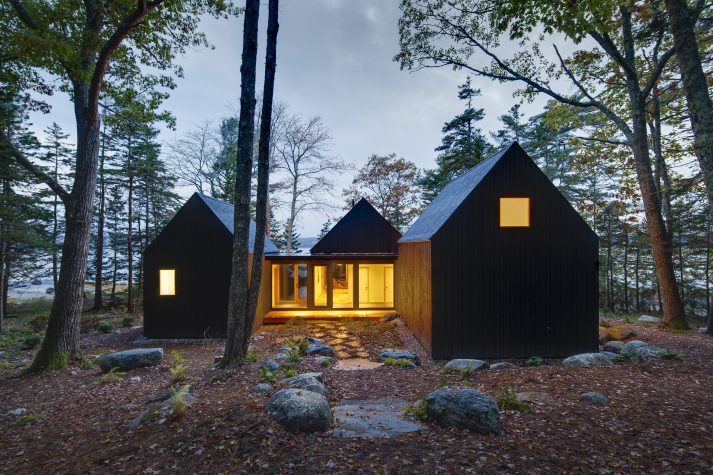 For Mainers, the old word “rusticators” implied wealthy city folk who descended each summer on countless lake camps around the state. Especially on Mount Desert Island (MDI), this term encompassed Astors and Rockefellers. But in truth, the first “rusticators” who began pitching tents here in the 1840s were not always well-heeled Philadelphians, Bostonians, and New Yorkers. They were ordinary people attracted by the region’s abundant natural beauty.

That was the case with the original owners of this camp, which is now owned by a San Diego–based neuroscientist and his wife, a former biologist now in biotech, that sits on a little peninsula jutting out into Somes Sound on MDI. “My maternal grandfather bought a little over an acre of land in the 1920s and lived in a tent here for years before building a small cabin himself,” says the husband.

Later on, he recalls, his mother inherited the camp. “My parents were both teachers, so we were lucky enough to spend summers here every year. There was no electricity or running water.”

“They used to haul water from a spring nearby for drinking,” adds the wife.

Many of these camps, explains William Hanley of Northeast Harbor–based WMH Architects, “were hodge-podge assemblies of different forms, a cobbled-together aesthetic that came from adding on to them over the years.” The original cabin here was no exception. The husband’s parents also added to the structure in subsequent years.

But one of their decisions, to excavate a full basement, turned out to be a grave miscalculation. Because there was a steep drop from the road, it became a big water slide for rainfall in wet seasons, and because the house sat just 25 feet from the shore—today’s setbacks require a 75-foot distance—the basement was constantly flooding. This and natural weather conditions took their toll, so that by the mid 2010s, the couple realized it was time to take down the old cabin and build something new.

They called Hanley and his partner, Heli Mesiniemi, a Helsinki-born architect educated in Finland and the United States. “It was a home-brewed affair, but very loved,” recalls Hanley of that cabin, agreeing that it should be put to rest and a new house erected farther back on the site to get it out of the floodplain.

The husband, who had aspired to be an architect as an undergraduate, sent the design team a PowerPoint demonstration featuring houses he liked, to serve as a guide. To Hanley and Mesiniemi’s delight, says Hanley, “He gravitated a lot toward a Scandinavian aesthetic in terms of the house’s relationship to the outdoors, to materiality, and to the quietness of the architecture. We got goosebumps the first time we met.”

The clients also transmitted some programmatic requirements, the main one being that the house be smaller in scale. “The shoreline on Somes is very intimate, so I wanted it to be congruous with the site,” says the husband. The wife adds, “The star of the property is the siting. Rather than have a big, showy house, we wanted to emphasize the beauty of the nature around it.”

The sleeping arrangement in the original cabin had been a loft space reached by some spindly, unstable steps. The bathroom was downstairs. “We’re in our sixties,” the wife explains. “We didn’t want to have to climb down rickety stairs, and we wanted something that would be practical for the rest of our lives.”

Hanley and Mesiniemi’s response was a cluster of gabled forms with large sections of window that are connected by a corridor—“a central core for living, eating, and food preparation and separate forms for the bedrooms,” says Hanley.

The synergies between the Maine camp vernacular and Scandinavian architecture are numerous, starting with the gabled forms themselves and their humble size, which bow respectfully to the grandeur of the environment. Both genres also rely heavily on materials from their surroundings, in this case native Maine white pine siding “rough-sawn so you can see the milling process,” Hanley notes. The pine continues on the interior ceilings and casework, though the team chose white oak for the floors.

Also in the Scandinavian vein, Hanley suggested the black exterior. “That took some convincing on my part,” admits the husband. Hanley had wanted to use the Japanese charred-wood technique known as shou sugi ban, but his clients felt it would be a bit extreme. “Staining it black seemed modest by comparison,” jokes the wife.

For builder John Atkinson, the simplicity of the structures proved pretty straightforward. His favorite aspect of the project, he likes to say, was that “We didn’t destroy the site. Usually, you go in and level everything. We cut a few trees so we could move around the property. But we didn’t blast anything or fill it with sand or crushed stone. We nestled it right into the site.”

Everyone’s biggest stumbling block turned out to be the pandemic, which prevented the clients from visiting the camp as the construction unfolded. “At first we thought it would be a dream come true for John, not to have the owners hovering over him,” the wife says with a laugh. But, as Atkinson explains, “There are always a lot of things that need to be communicated on-site; pictures don’t always tell the whole story.”

Fortunately, the lumber order had been placed just before the pandemic hit. But many finishes, such as the wall tile in the primary bathroom and starter pieces of furniture (the house is still not fully appointed) had to be sourced in San Diego and sent to Maine.

Atkinson and landscape architect Mike Gillis collaborated on defining the construction envelope “to keep the land from being trampled by the crews,” says Gillis, “so that we could come back afterward and heal the areas disrupted by equipment.” He also regraded the land so that rainfall could be diverted away from the camp. Once this was achieved, he created stone steps and a Japanese-style walkway to the courtyard formed by the three pavilions. There he planted ferns, mosses, and natural ground covers so it would look completely of a piece with its setting.

In many ways, the house conforms to the ethos of the earliest rusticators, who also placed a premium on unspoiled nature when they jerry-built their own camps. “People don’t talk about the quiet projects enough,” laments Hanley. “It’s quiet and contemplative and threaded into the context that informs so much of it.”

This could not make Hanley’s clients, whose nieces and nephews also partake of this sublime simplicity, any happier. “I love the way the house just settles into the land,” says the husband. “It looks like it belongs here.” 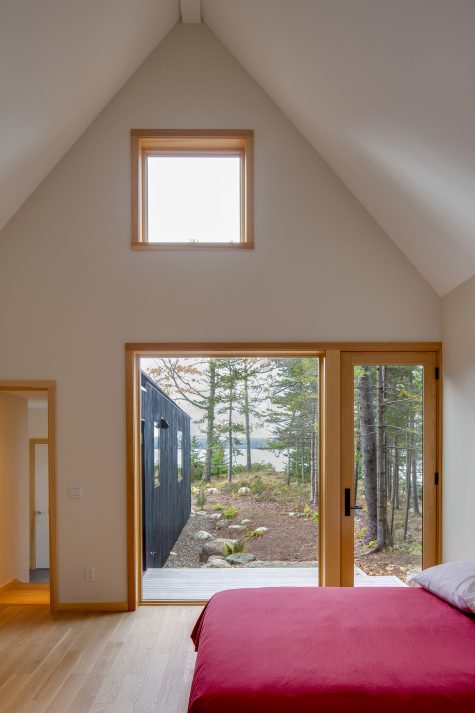 The view toward Somes Sound from the primary bedroom. 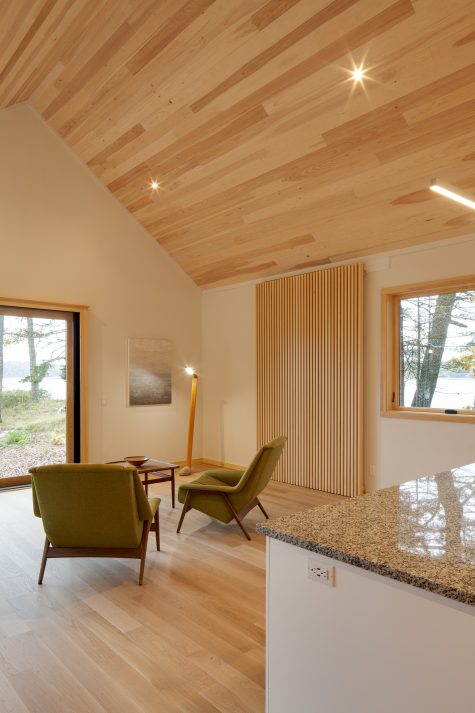 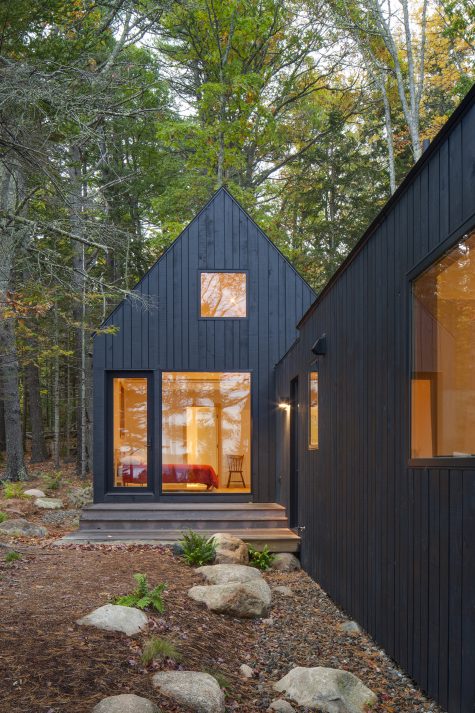 The small deck and steps off the primary bedroom are intentionally low to ensure one-floor, aging-in-place living. 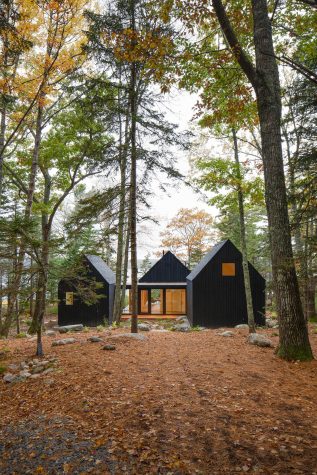 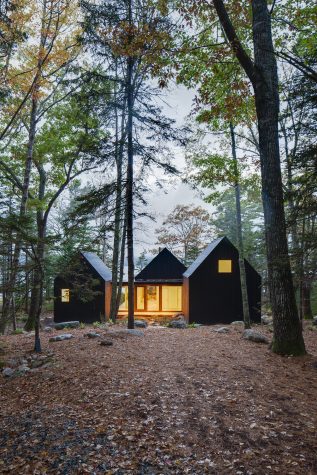 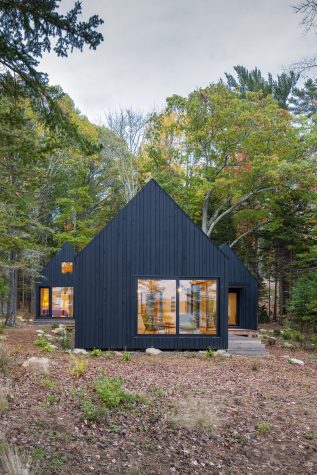 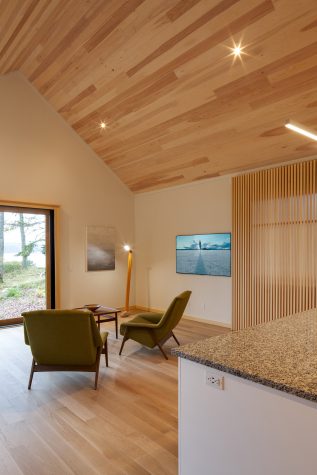 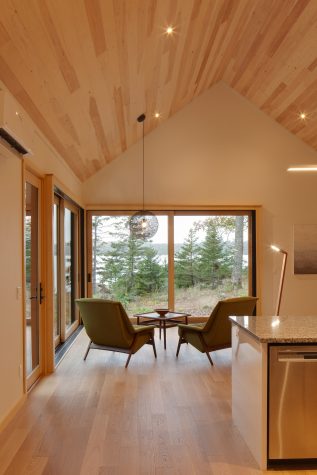 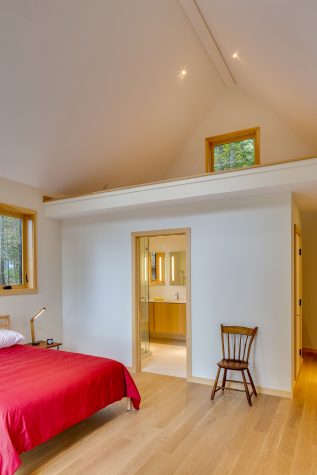 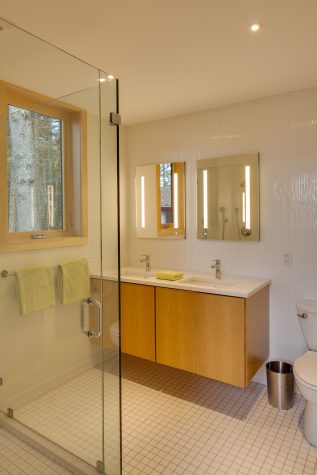