A comfortably austere, modern, and minimalist home perches on a Peaks Island ledge. 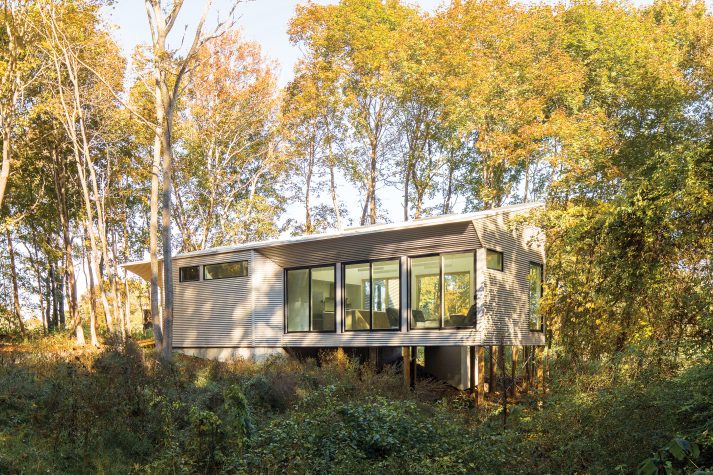 Designed by Winkelman Architecture and built by Doug Wilbur, this sophisticated and scuptural home sits in a wooded lot on Peaks Island. 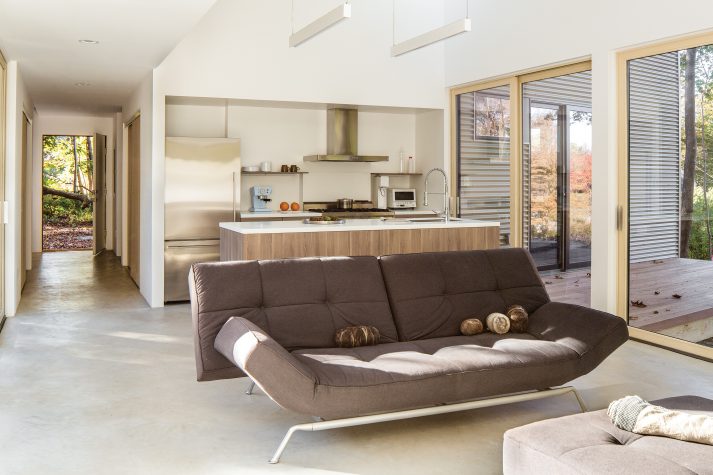 Winkelman praises the homeowners for their minimalist, thoughtful style decisions. The floors are poured concrete, with radiant heat underneath. That, says the homeowner, is the ultimate luxury. 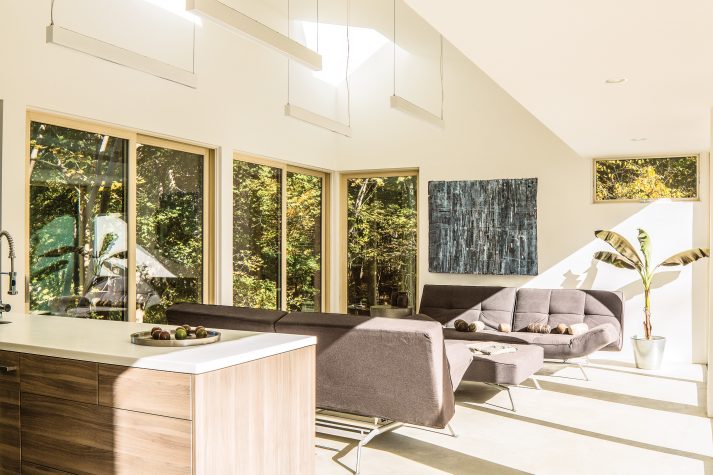 In the main room, the neutral-toned sofas and an ottoman from Ligne Roset provide plenty of indoor seating. When the weather is nice, the back glass doors can be opened out onto the porch. 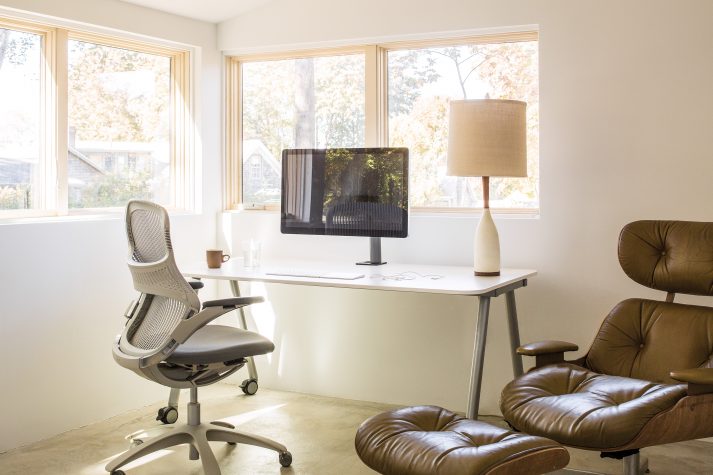 The simple home office includes a lounge chair and ottoman in the style of Eames. 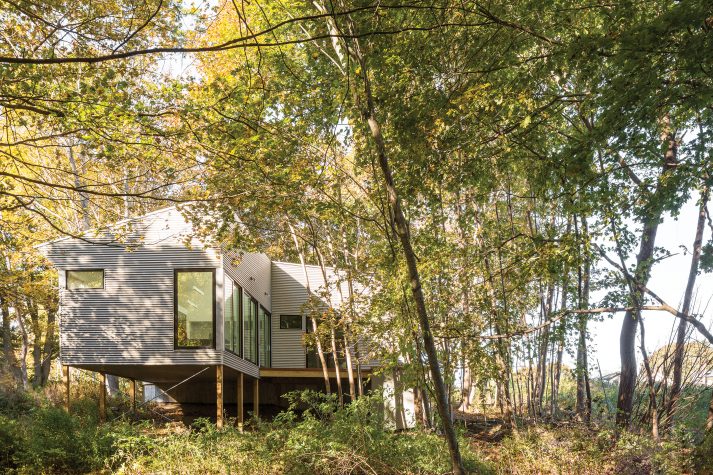 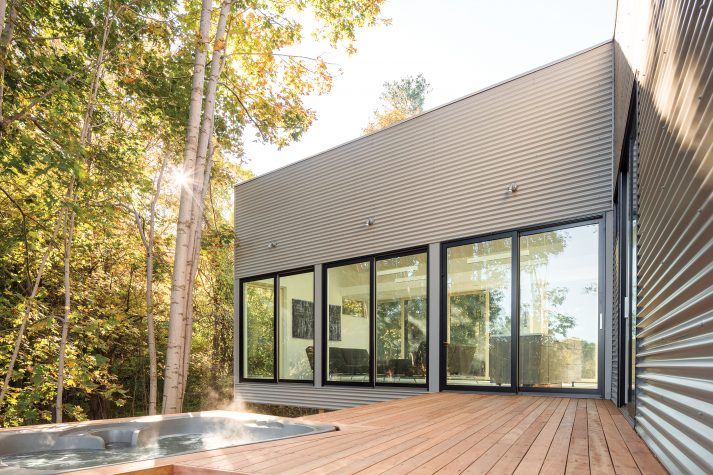 Winkelman chose horizontally aligned metal for the siding, which further elongates the already long lines of the home. 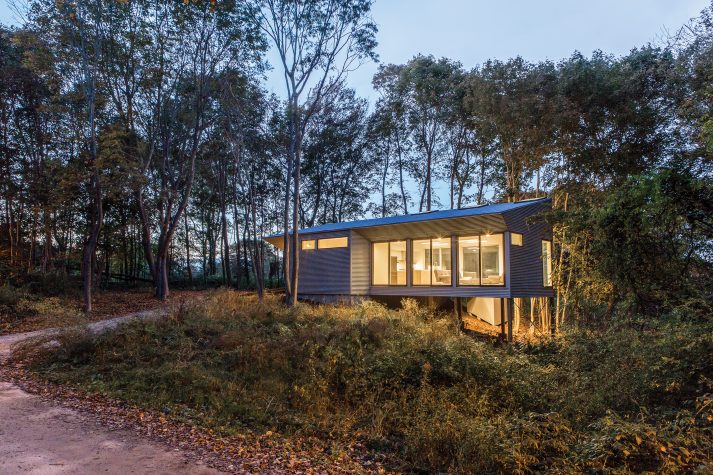 The house can be seen from the road, but since it's not right downtown, Winkelman felt he had more space to play around with form. Both Wilbur and Winkelman live on Peaks Island, so they're familiar with the local architecture as well as the challenges that come with building on an island.

The prospective homeowner asked for a spaceship. More specifically, John Clark told architect Will Winkelman that he wanted “a Millennium Falcon cabin” to land on his newly purchased Peaks Island lot. The year was 2013, and John and Jane Clark* were looking to spend less time working in New York City and more time surrounded by trees, dogs, and horses. The couple was on a very limited budget, which meant their purchase wasn’t exactly prime property. But the uneven, undeveloped, one-and-a-half acre lot seemed like a miracle to the couple. “It was on an island, in Maine,” John says. The woods were a bonus. “I always liked the idea of hiding things in plain sight. We wanted something that reflected the cabins and summer camps and light agricultural sheds around us,” he says. “But we were going for ‘having a little fun,’ not ‘making fun of.’”

Not that anyone would make that mistake: the house is a serious piece of contemporary architecture with big windows, bold angles, and a small foot- print. It’s surrounded by trees and set back from the center of town, which gave Winkelman (a fellow Peaks resident) the freedom to experiment a little bit. “The parcel of land they found was connected to the neighborhood, but it wasn’t in the neighborhood, which means it wasn’t in the context of cottages,” Winkelman says. “When they came to me, they asked for something spare, white, minimalist. Not a building, a sculpture.”

Working in collaboration with Chris Miller, a former intern at Winkelman Architecture, Winkelman drew up thorough plans for a compact, spare, see-through house that perches lightly on the side of a ledge. The main living space flies above the ground, as does the deck (located on the back of the house) and the hot tub, which sits flush with the deck’s diagonal boards. The bedrooms and bathrooms anchor the structure to the land visually, though the steel beams and concrete pours (located under the living space) carry the brunt of the physical burden. For builder Doug Wilbur, this house was an exciting challenge. Winkelman, he says, thought of everything in advance, leaving it up to Wilbur to execute his lofty plans with precision and care. “Some- times architects expect the builder to figure out how it will work, but I know when I get plans from Will, they will be first-rate,” Wilbur says. He had never worked on a project quite like this one before, but the unusual angles, the rigid lines, and the bare-bones materials all piqued his interest.

While the building process went smoothly by all accounts, Wilbur did face a few challenges here and there. Figuring out how to create a concrete floor with radiant heating in the main living space (which, as you’ll remember, is set above the ground) was “a head-scratcher.” The two-inch-thick concrete slab had to sit flush with the wall plates and leave room for all the electrical wiring and utilities. “What we ended up doing,” Wilbur says, “is putting down all the interior wall plates, laying out the floor with a half-inch of plywood to raise it, and then pouring the concrete.” There was also a bit of skepticism about the drywall, he remembers. “It all goes right to the floor, no trim, and the sheet rocker was a bit perplexed by this at first,” he says. “But it worked.”

A large part of Wilbur’s role was making sure that every line and plane merged perfectly. “There’s nothing decorative in this house,” he says. “If something is off by half an inch during the building phase, you’ll see that in the finished product.” For him, the word to remember was “continuity.” The spaces had to feel continuous with each other and with the exterior of the home. “It’s an idiosyncratic shape,” says Winkelman. “That’s partially in response to the sun. The house has a series of skylights, and you can also look right through it. There are big sliders, eight feet by eight feet, which is a stock size. They’re identical on both sides, which makes it very transparent, but it’s been done in a cost-effective way. It has a half-bridge vibe.” This allows the Clarks to open their sliding doors and let the breeze flow straight through the house. It also lets them use the back porch as an extension of the living area. “You might think you’d feel like you’re in a fish- bowl, in a glass house,” says Wilbur. “But you don’t. You look outside, and all you see is trees.”

While Winkelman admits that, if he “had his druthers,” the whole house would have been “smothered in white,” he’s happy with how the prefinished siding looks with the rolled asphalt roof. Recently, the couple had the roof redone in standing-seam metal, which makes the home look even more like a spaceship. “The unifying principle for all the materials was economy,” says John. “The shed siding was all about fitting in, but not quite.” And the house does fit in—mostly. There’s an element of otherworldliness about it too. “It’s a light touch on the land- scape, but a hard modern form,” summarizes Winkelman.

While the couple didn’t build this as their primary residence, that’s what it became. Now they live and work from their little white-walled Peaks shed. The guest bedrooms are home offices, and the hot tub gets plenty of use. With its IKEA kitchen and prefab siding, the house doesn’t exactly scream luxury, and yet it has plenty of creature comforts. Take, for instance, the storage. Throughout the house, you’ll find shelves hidden away, places to store food, clothes, what- ever you might need. It’s possible to move through the space without being confronted by clutter—a rarity in these times. One also needn’t wear wool socks; “walking around barefoot in winter is the ultimate luxury,” John quips. The radiant-heat floors combine with the tight building envelope (and spray-foam insulation) to create a cozy, warm little UFO, even when the winds are howling across the island. And while one does have to worry about updrafts on Peaks, this structure is built so rigidly, so solidly, that it never shifts or sways.

In the years since the project was completed, John and Jane Clark have become friends with Wilbur and his wife, which means the builder has been granted quite a few opportunities to check out his handiwork. There isn’t, he says, a single thing he would change. “I love the choices they have made with the lighting,” he adds. (In a rare splurge, John sourced fixtures from his favorite design firm, Rich Brilliant Willing. “We knew we’d be living in the kitchen, porch, and living room, so if we had any budget for drama, it would go there.”) For Wilbur, the most satisfy- ing thing is to see how well the cost-effective build allows his former clients to live. “Sometimes modern houses can have an air of pretentiousness about them,” he says. “This is almost the opposite. When you’re there, you’re there with them, the animals, and the plants. That’s it. Every- thing fits just right.” 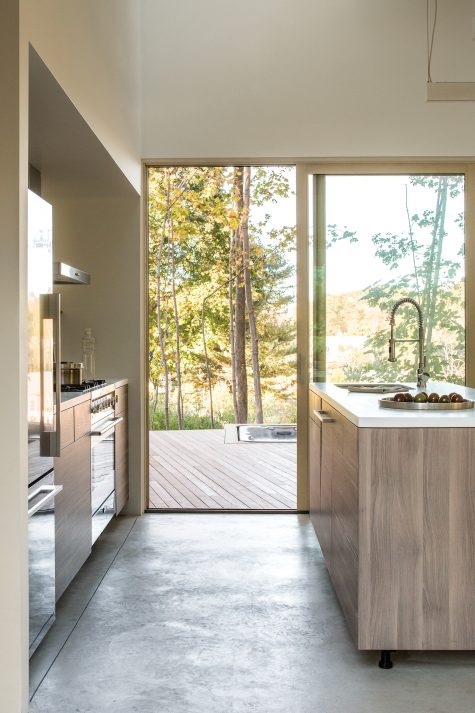 Because the small house was done on a tight budget, the homeowners opted for cabinetry from IKEA. 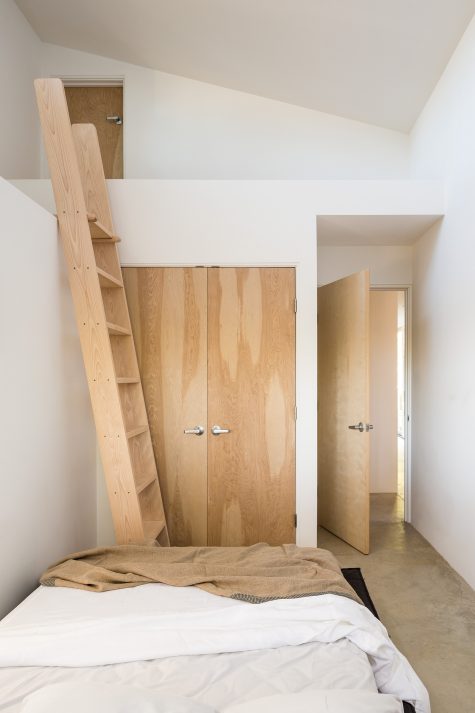 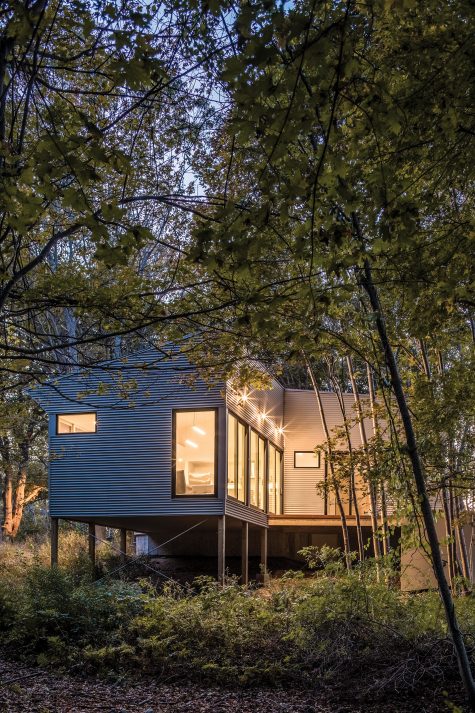 Concrete and steel support beams hold the living area as it soars above the landscape with engineering by Albert Putnam Associates. 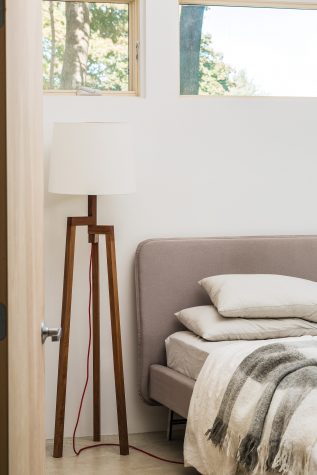 Compact furniture and natural light help to make the home feel larger than it actually is. 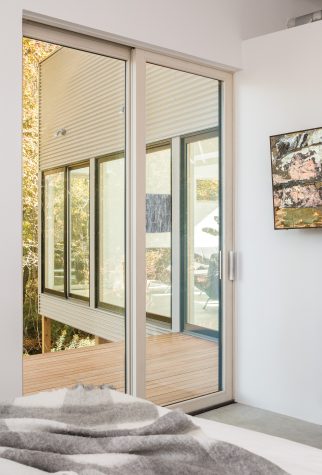 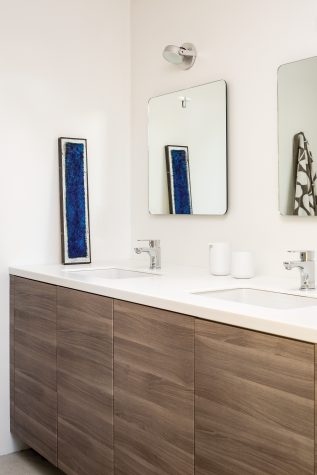 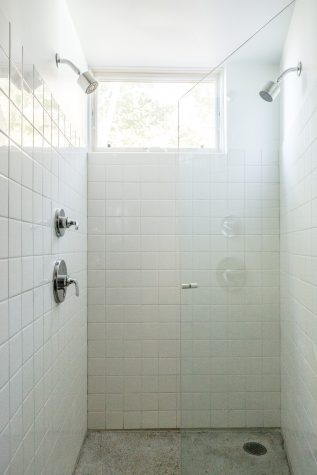