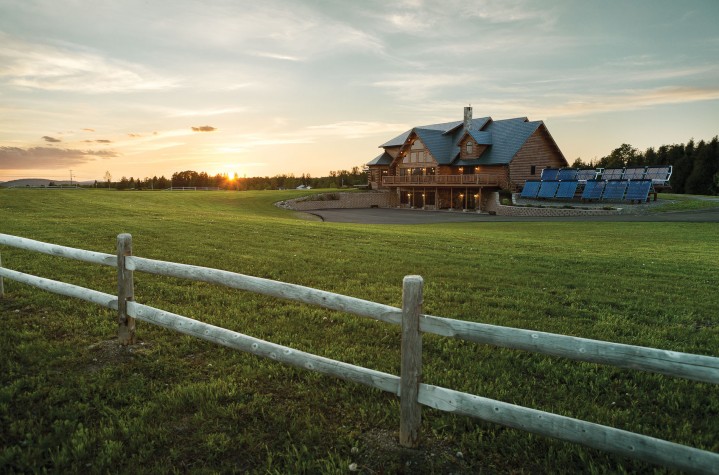 As a teenager, Jeff Vreeland picked potatoes in this field. Later, the land featured a harness race track. Now the fields are part of the grounds for his majestic log home, located on 40 acres in the heart of Aroostook County. Two hundred and forty solar collectors rest on spruce logs to the right of the home. The hot water they provide meets 70 percent of the home’s heating needs. 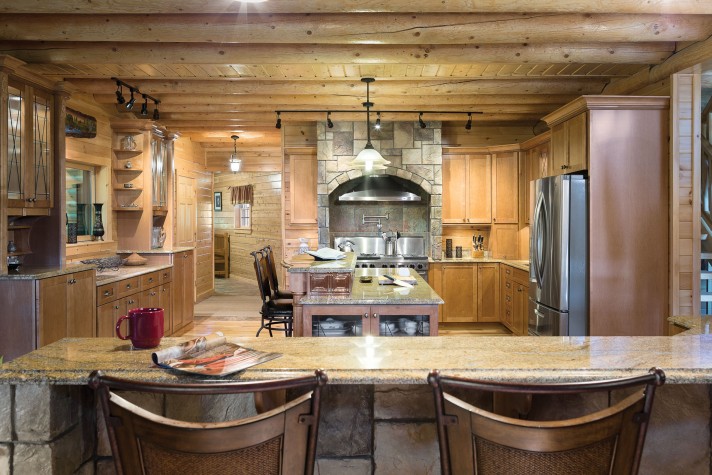 The kitchen features maple cabinets, spruce ceiling beams, cedar walls, granite counters, and a breakfast bar. Lisa Plourde, of Rathbun Lumber Company in Presque Isle, suggested an elevated island that accommodates two chairs for the center of the room. The stove was set into a stone surround for a hearth-like effect. The window to the left looks down over a bar. The door to the left leads to a pantry. 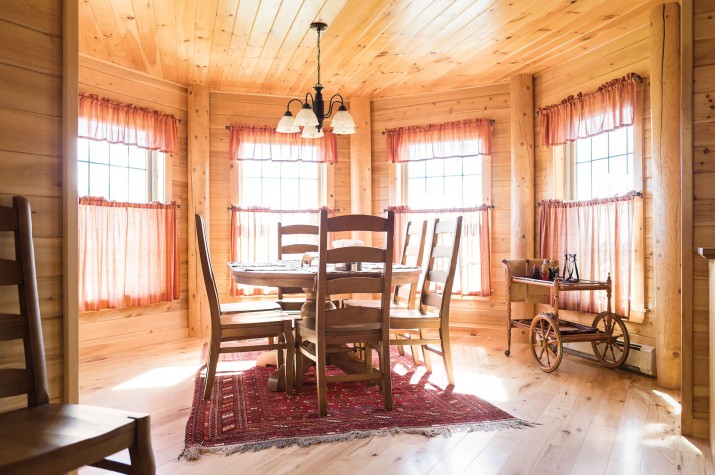 A gazebo-shaped dining room with oak furniture, an Afghan tribal carpet, and a rosewood teacart from Pakistan. 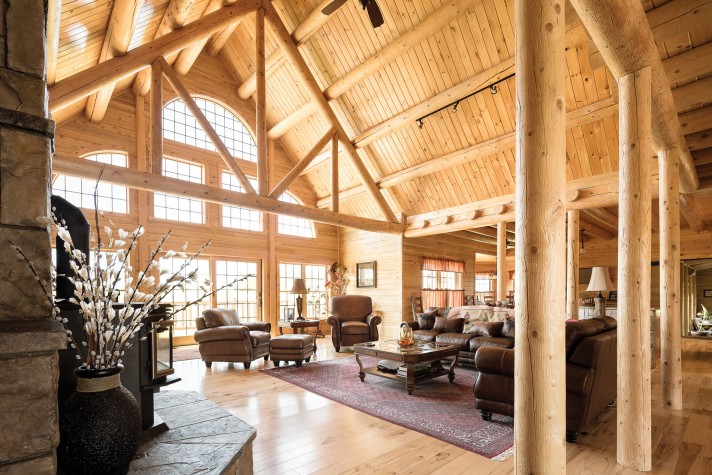  The great room features large Andersen windows that make use of the curve that appears elsewhere in the design. The seating area has a rug from Tabriz, an Iranian city known for its rug weaving. The home features almost two dozen different wood species. Here, the purloins are spruce, and the walls are knotty pine and cedar. 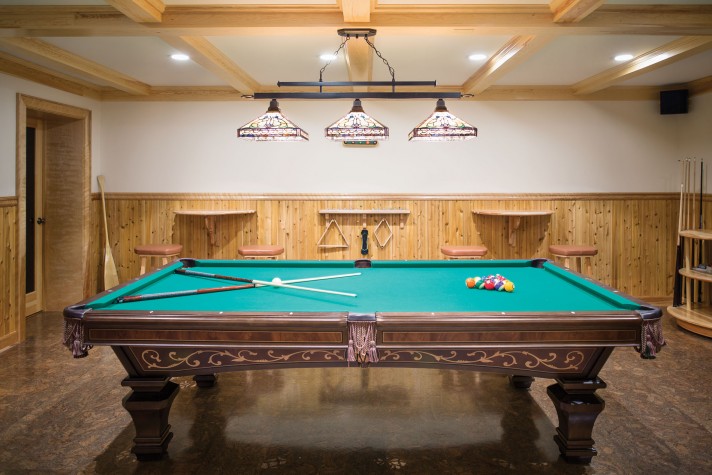 A pool table from Skillful Home Recreation in Portland dominates a room with cork flooring, Norwegian pine coffer ceilings, and cedar wainscoting. Drop-down tables of birch were made by Ernie Drost of Presque Isle. 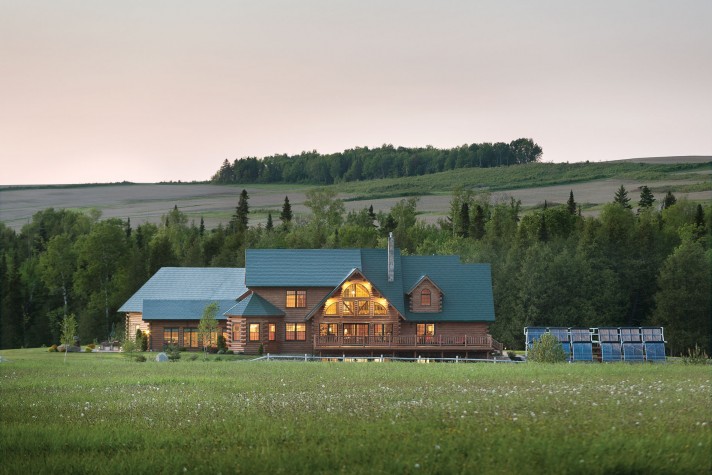 A view of the home looking north, showing front and back fields, which feature clover and other fragrant native species. 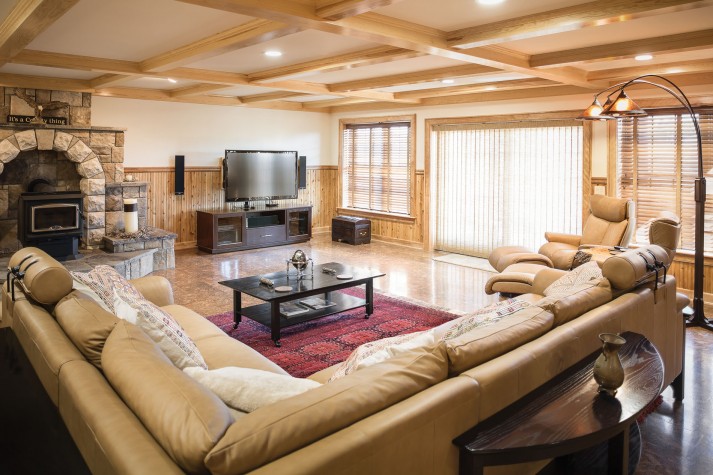 A downstairs recreation room offers an additional space for family and friends to gather. A downsized version of the woodstove in the great room occupies one corner of this room, which also has a cork floor, Norwegian pine coffer ceiling, and cedar wainscoting. The lounge chair at the far right is from Norway. 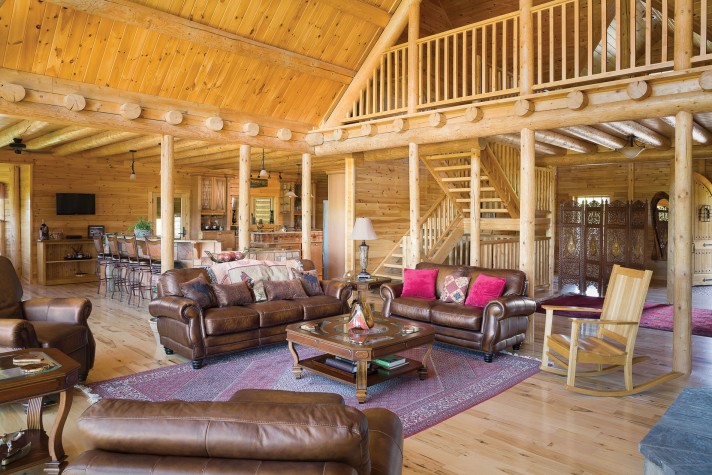 Another view of the great room, showing an open staircase that leads upstairs to a loft and downstairs to the recreation area. 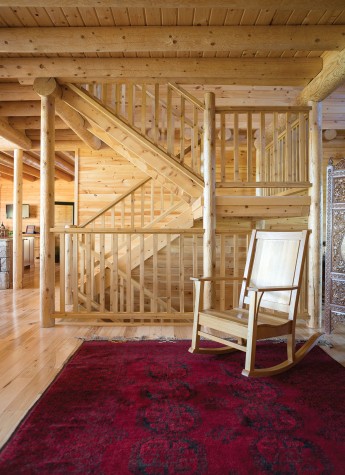 After decades of travel, a couple returns to northern Maine for their retirement years

Being in the CIA makes you long for space. At least, it made Jeff Vreeland long for space. Of his 26 years with the Directorate of Operations, he spent 16 overseas. “You end up in rather claustrophobic settings for a variety of reasons,” he says. “I traveled and worked abroad under an alias and under various professional guises, so small apartments, military cots, and hotel rooms became a way of life.” For retirement, he wanted something different: space, land, vistas. And he knew where he could get what he wanted: back home. Not home in Virginia, where he’s lived and worked since leaving government service. But home where he and his wife, Sue, grew up: Presque Isle. Undeveloped land is inexpensive there—sometimes only $1,500 an acre, according to Jeff—but that wasn’t the big pull. The big pull was settling back among family.

In preparation for retirement, Jeff and Sue—who, among other things, worked for the State Department as a logistics officer in Frankfurt and Kathmandu—looked at parcels of land when they were home visiting family. At first they weren’t even thinking about what sort of home they wanted. Eventually they found 40 acres that seemed perfect: rolling farmland and fields of yellow and red clover, bordered by forests and streams. At one point, the land had been owned by a harness-racing aficionado who had a half-mile racetrack on the property. What’s more, Jeff used to pick potatoes on the property when he was a teen, hoisting barrels onto the truck to take to the potato house. The boyhood experience gave Jeff an intimate knowledge of the area and a clear sense of the advantage of being four miles south of Presque Isle proper. The plot had easy enough access to Route 1, but not the kind of proximity that would make noise a problem.

Once they bought the land, the Vreelands started researching log homes. Jeff said he liked the solid nature of such homes. He liked their appearance and presence and also felt they were a natural for the Presque Isle environment. As the Vreelands were thinking about styles and manufacturers, they went to a Virginia home convention and ran into Barry Ivey from Katahdin Cedar Log Homes in Oakfield. Ivey remembers, “The summer after that, the Vreelands came up to visit the mill on one of their trips back to Presque Isle. We had a couple of different meetings over the course of 12 to 18 months, by phone or email, or if they were coming up this way for holidays, we would meet face to face.” By 2009 Katahdin had finalized a “package” for the Vreelands, which is to say, they had put the house design together with the materials that were necessary to execute that design. Then the project was handed off to a builder. In this case there were two builders, both picked by Jeff: the late John Desjardins of Presque Isle’s Desjardins Builders and cabinetmaker Ernie Drost, also of Presque Isle. The Katahdin package consisted of a northern white cedar log home, with cedar for the exterior walls, gables, and dormers and spruce for the roof purloins, tie beams, and ceiling joists. Log homes, at least the ones produced by Katahdin, have the advantage of being superinsulated, so the Vreelands ran with this advantage, orienting their home to the south and siting 240 solar collectors on 40-foot spruce logs adjacent to the house. The panels support 13 radiant in-floor heating zones and the house’s hot water supply. Seventy percent of the home’s heating is provided by the solar system. A fuel oil furnace and two stone fireplaces meet the rest of their heating needs.

The Vreeland house is nothing if not sizeable: broad vistas outside, but also plenty of room to move about inside. At 9,500 square feet, it was the largest log home that Katahdin had ever built. The entrance is stately. “If you have a large home, you need something appropriate for the main door,” Jeff says. He saw a Spanish-style arch door at one of Katahdin’s dealers in Maryland. Jeff purchased Andean walnut for his own curved entry doors. The doors have whimsical inset peekaboo doors—the kind I associate with the Wizard forbidding Dorothy admittance to Oz. Jeff, however, thinks of them more as speakeasy doors: OK, you’re good. Come on in. Rather than using the cast-iron hardware that came with the door, Jeff procured sturdier ironwork that wouldn’t get “fatigue” from the cold. At 30 degrees below, a not-uncommon temperature in Presque Isle, iron gets brittle. The curve of the doors is repeated in an inlay of floor stones that mark the entryway transition into the home.

The entrance leads into a large great room. A spruce truss, ceiling columns, and beams define the cathedral ceiling, which is otherwise sheathed in cedar and pine. The curves of the entry door are again repeated, this time in the large Andersen windows that fill one wall of the great room. A hickory floor adds to the mix of woods. The rustic decor is complemented by the use of stone at the fireplace and in the neighboring kitchen, which mixes wood and granite, and includes a hearth-like surround for the stove. The kitchen itself was designed by Rathbun Lumber Company. (They were also responsible for the bathroom design.) Sue knew she wanted purlins on the ceiling and an island and a breakfast bar. Sue says Rathbun’s designer came up “with the nifty idea of an elevated island with two levels, with additional seats and with some copper plating between the levels.”

The great room is the largest gathering room in the house, but there are two substantial gathering spaces downstairs as well. One is a living room that has a wood fireplace, a coffered ceiling with Norwegian pine, a cork floor, and cedar wainscoting. The other downstairs space is a poolroom with a pool table in the room’s center and fold-down tables with stools along the walls. Ernie Drost made this furniture, as well as stick racks and ball holders.

The house is outfitted with large leather sofas and chairs, as well as pieces from the Vreelands’ overseas adventures. A traditional Afghan tribal rug is under the table in the gazebo-shaped dining room. (The Vreelands know the country well, having been stationed there in the ’80s, but also because, after Jeff, who speaks Persian, left the government, he owned a company that built cell phone towers in Afghanistan.) Near the table, there is a cart from Pakistan carved out of rosewood and set with brass inlays. The living room rug is from Tabriz in Iran.

If Presque Isle seems surprisingly remote and awfully cold for a couple who has led such a varied life, often in warmer climes, the Vreelands feel otherwise. “We used to come every summer,” Jeff says, “and temperature is not an issue. I love the pine scent of the air, the rawness of the setting. It’s not all urbanized, and I like that. There’s lots of wildlife: moose, bear, beaver, fox, hawks. We also have honeybees that we raise for honey.” For the Vreelands, it’s a perfect place to come home to. 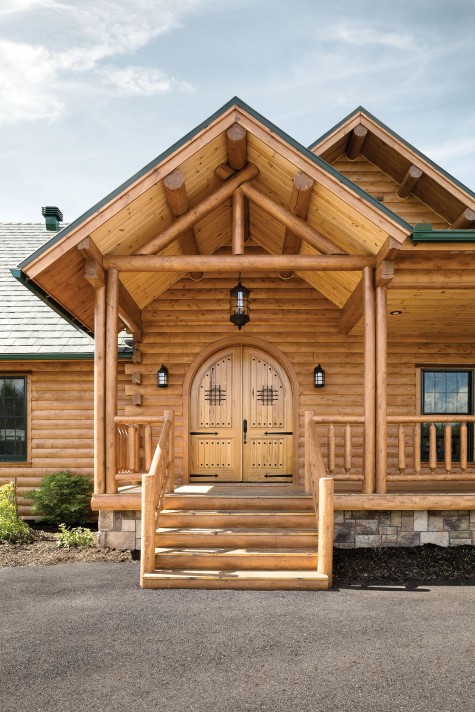 The front entrance showcasing cedar posts and beams. The curved doors with iron hardware are Andean walnut set in a mahogany frame. 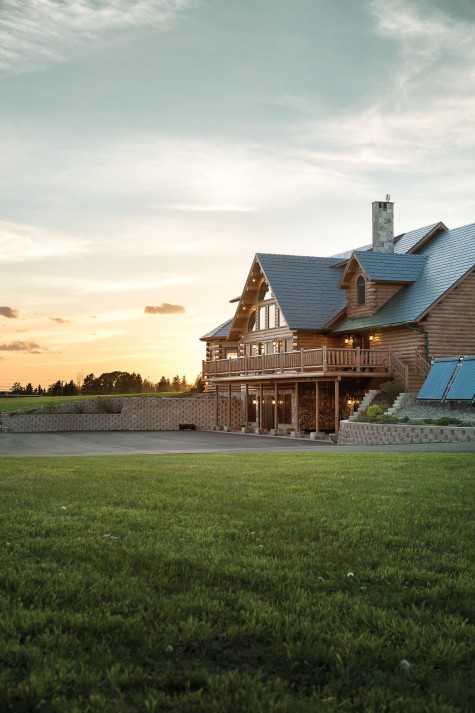 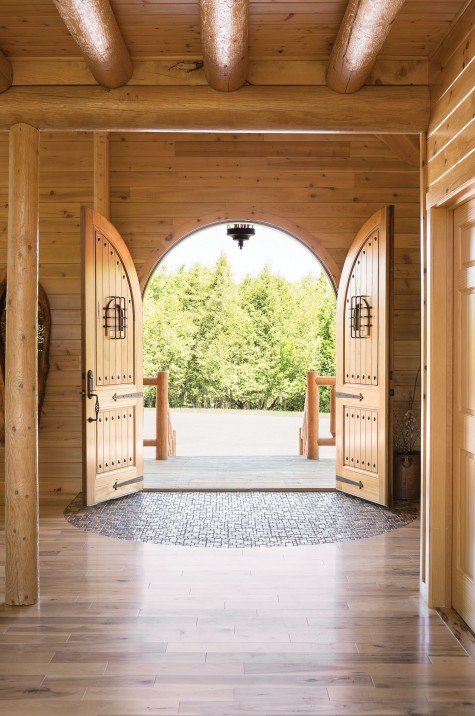 The entry doors feature custom iron clavos and peep gates. The curve of the door is repeated in the curve of the ceramic tile entrance. The floor is hickory, the walls are cedar, and the beams are spruce.