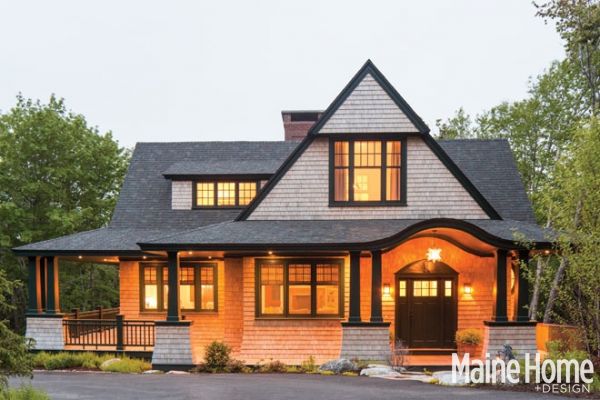 This shingle-style house designed by William Hanley of WMH Architects and built by E.L. Shea features sheltered spaces so “you can step within the realm of the home even before walking through the front door,” says Hanley. The house takes some cues from the architecture of prolific Mount Desert Island architect Fred L. Savage, who was known for creating similarly varied exterior experiences. 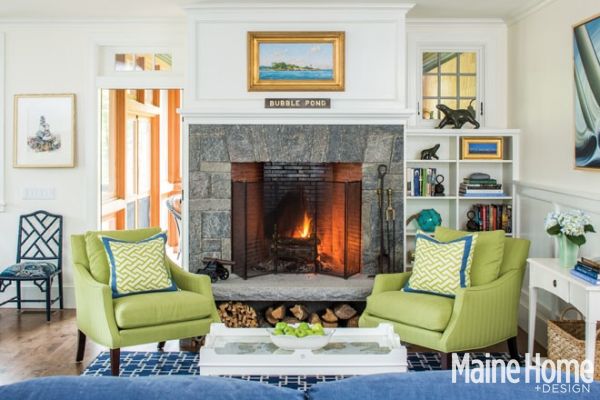 A fireplace was a must for homeowner Heather Stephens, who spent many a night beside a roaring fire at her family’s Northeast Harbor home. Above the mantel hangs the painting Ten Pound Island, Gloucester Harbor by David Bareford. 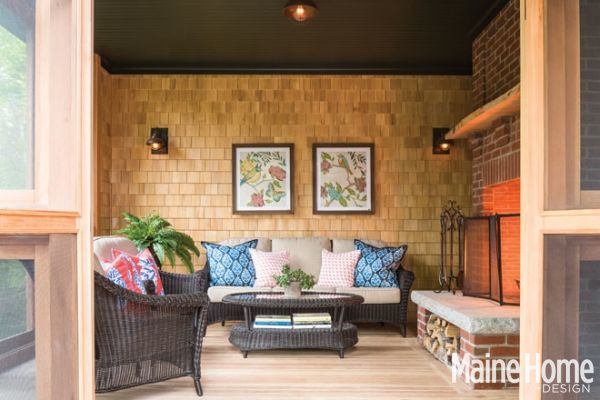 Outdoor living spaces, like this screened porch with fireplace, expand the living area of the home. “It’s the most used space in the house,” says Heather, “whether it’s coffee in the morning, tea and a good book in the afternoon, a glass of wine with friends in the evening, or a game of cards and s’mores with the kids using the fireplace.” The sofa and chairs are from Thomas Baker, the blue ikat pillows are from Simply Home, the wall sconces are from Circa Lighting, and the other chair pillows as well as the prints are from the Romantic Room. 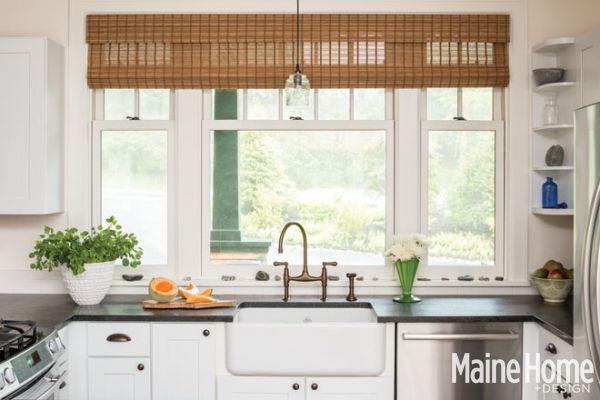 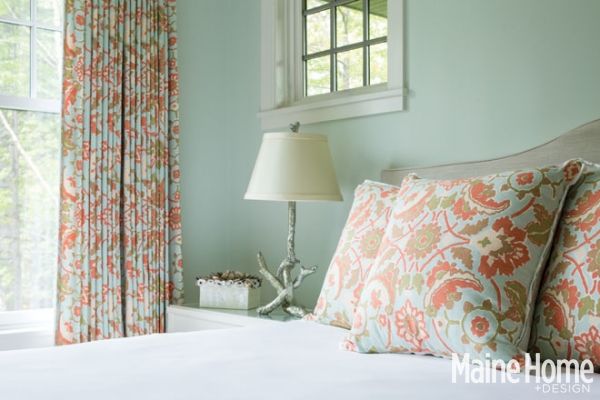 For the owners’ bedroom, designer Fremont-Smith selected Farrow and Ball’s Pavilion Blue on the walls, Euro shams in Thi- baut’s Marseille print, and a twig lamp from Simply Home. 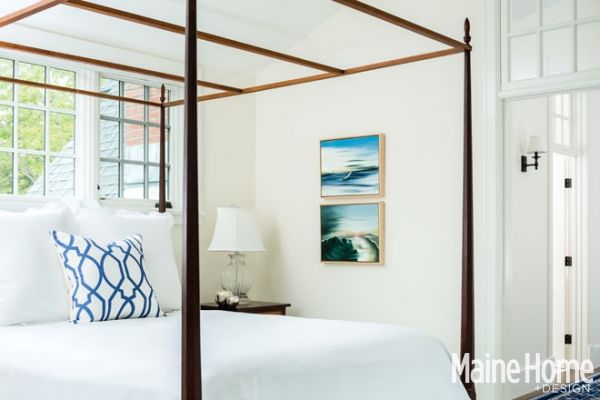 A bedroom features Matouk bed linens from the Kimball Shop and two paintings (The Wave on top and Fold below) by Ben Lincoln from Littlefield Gallery. 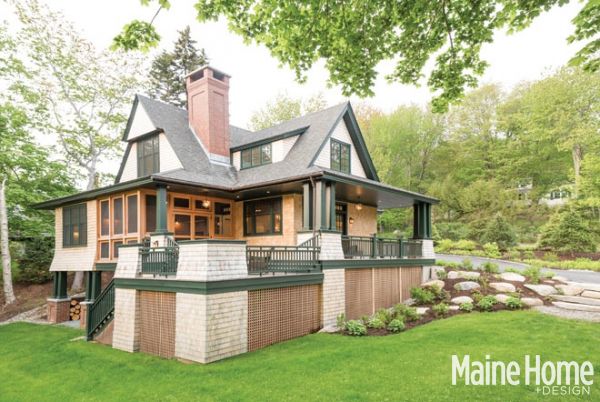 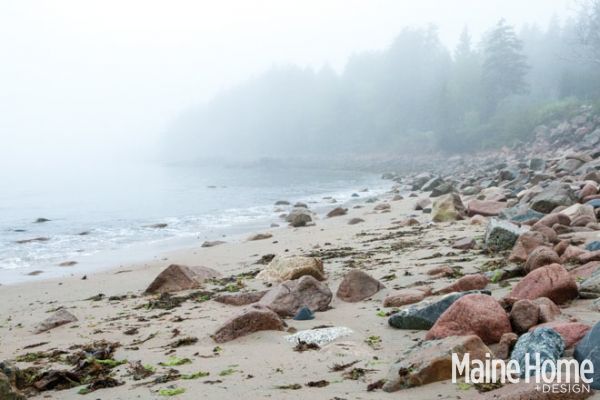 A nearby seascape is shrouded in fog. 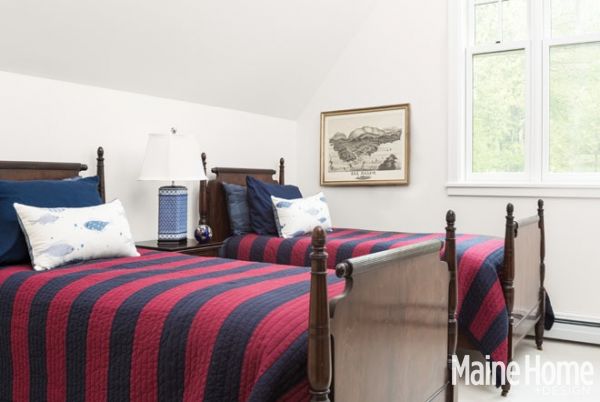 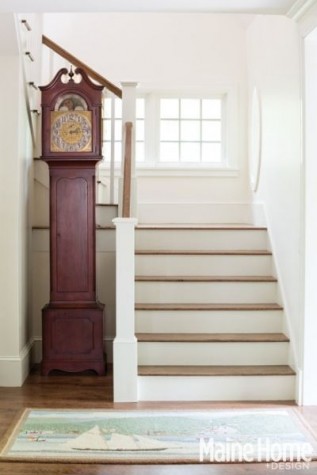 In the front hall is a circa-1880 grandfather clock from Paine Furniture in Boston and a McAdoo rug from the Romantic Room. 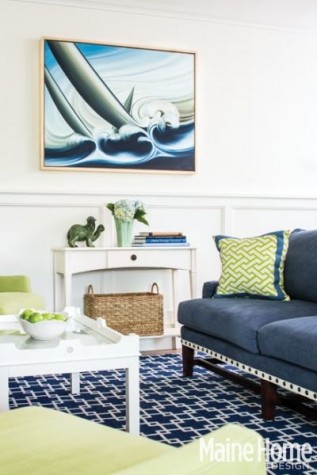 Interior designer Leandra Fremont-Smith designed the living room around a large sofa from Simply Home and a navy Dante Stria rug from Stark, while adding some fun patterns with pillows. Complementing the furnishings is the painting Spray #2 by Ben Lincoln. 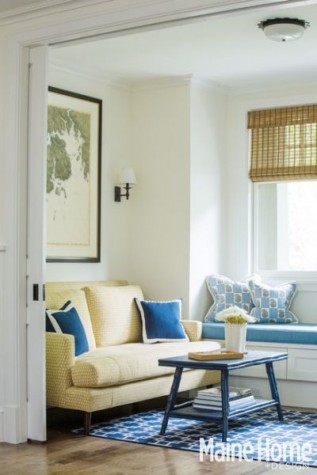 “We don’t make TV a focus when we are in Maine,” says homeowner Heather Stephens. “Years of growing up at the Big House with only a little black-and-white TV on the third floor with an old hanger for an antenna helped shape that mindset.” Instead of making television the focus, a TV nook with windowseat allows the family access to all the technology, as well as sliding doors to shut it out. 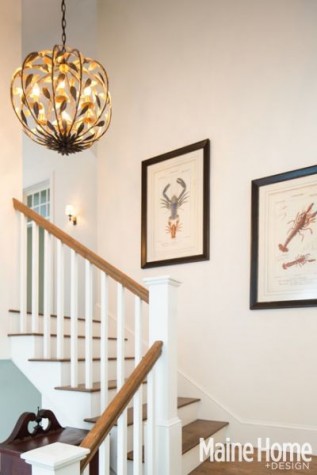 Heather Stephens fell in love with this chandelier from Patti Bros Lighting and Furniture and had to have it for the stairwell. “I love the pattern that the light reflects onto the wall in the evening,” she says. 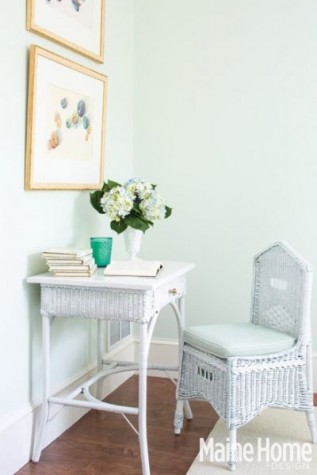 An antique wicker desk and chair (circa 1920) from Higgins Antiques in Southwest Harbor occupies a serene corner of the owners’ bedroom underneath watercolor prints by Leslie Fogg.

Sometimes the bridge between everyday life and vacation is a literal bridge; for Heather and Alex Stephens and their family, it’s the one connecting the town of Trenton to Mount Desert Island. Every time they pass over it, even in winter, the Massachusetts family rolls down the car windows to let in the briny sea air. “We feel ourselves relax the second we reach the other side,” says Heather.

Heather’s ancestors—including Charles W. Eliot, co- founder of Acadia National Park and the longest-serving president in Harvard’s history—likely had an altogether different experience getting to the island. Until 1915 automobiles were banned on MDI to preserve the peaceful setting. Visitors to the grand summer estates had to leave their motorcars at the bridge and were picked up by their hosts in horse-drawn carriages. To this day, cars are still not allowed on the island’s network of carriage roads.

The family’s shared home, Eliot Cottage in Northeast Harbor, was designed by Peabody and Stearns in the early 1880s. It has been said that 20-year-old Fred L. Savage met Robert Swain Peabody (Eliot’s brother-in-law and one of the country’s most prominent architects) while working on the house. After seeing Savage’s potential to be more than a skilled carpenter, Peabody took him under his wing as an apprentice at the Boston firm, and Savage went on to become an architectural great in his own right, developing a characteristic style and a name for himself as MDI’s most prolific architect.

Today that cottage is affectionately known as the “Big House,” and Heather and Alex have spent many a summer there with family. As the couple grew their own family, however, they sought a place of their own in Seal Harbor, where Heather’s parents had settled and where their three kids could walk everywhere and be close to friends. When they found a rare double lot for sale in the village, they jumped on it.

Through friends, the Stephenses met William Hanley of WMH Architects based in Northeast Harbor. “We could trust that he understood our vision for our home and would work with us to make it a reality,” says Heather. That vision included a classic Maine shingle- style cottage that would fit both the landscape and its in-town location. There were some specific must-haves as well: Seal Harbor green trim, for one, a hallmark of homes in the area; a large wraparound porch with covered and uncovered spaces; a large fireplace (the Big House wasn’t heated, so Heather grew up associating Maine with a roaring fire at night); and an open floor plan for the main living spaces. “These things really stemmed from our desire to have what we most loved about the Big House but on a smaller scale,” says Heather.

Heather and Alex chose Ellsworth-based builder E.L. Shea Builders and Engineers to head up the construction team and Acadia Design Studio to do the landscape design. The couple decided to take down the existing, tired turn-of-the-century bungalow and rebuild. Working alongside Hanley, Acadia Design Studio provided the site design and planting plans, working to reclaim the site. During excavation of the property, a geologist examined the stratification of the soil and found debris from the Bar Harbor fire of 1947, which had been used as fill on Main Street.

Given the home’s presence in the village, Hanley scaled the new house to appropriately relate to the established residential streetscape. The original home on the property had been “oddly placed—it wasn’t using the amenity of the double lot at all,” says Hanley. The team pushed the new structure more to the north to “activate” the south and west yards. “They’ve got kids, they entertain, they wanted to be outside in the village, so we really wanted to capitalize on the double lot with the positioning of the house,” says Hanley. Oriented to the east, with a front door punctuated with an eyebrow dormer and sunrise transom, the house welcomes, but it doesn’t reveal its full hand of cards to the public side of the lot. “The home presents itself selectively with a pedestrian scale that is respectful of the established residential corridor,” says Hanley.

Architecturally rooted in the shingle style in the spirit of Savage, the house is dominated by a pronounced east/west steeply pitched roof, bold massing, natural shingled walls, and traditional aesthetic embellishments such as shingled half-rail walls, tapered half columns, and deep covered porches, creating a strong dialogue to the outdoors. “When you have more compact plans as Savage often did, usually the vertical was more emphasized. You see that in smaller proportions—throughout the windows, for example—and in the tapering of columns that force the eye upward to help ease the often top-heavy home down to the pedestrian level,” says Hanley.

When it came to the interior design, Heather and Alex did not have far to look: Heather turned to her sister-in-law, interior designer Leandra Fremont-Smith, who had worked on the couple’s first home in Massachusetts. Fremont-Smith grew up spending her summers at her family’s Bar Harbor home known as “The Farmhouse,” the second-oldest house on the island. “My vision was primarily centered around comfortable furnishings and implementing Heather’s fondness for a soft sea-glass color palette in primarily blues and greens,” says Fremont-Smith. “It had to be stylish, of course, but also had to make sense for a busy family with kids and pets. We were taking elements from the family’s past and carrying them forward on a much simpler, more relaxed level.” Heather emphasized, for example, that she did not want “formal chairs that may look great, but aren’t the kind that you want to curl up and read in.” “I drove Leandra crazy trying to find the right-sized but comfortable chairs for the living room space,” she says.

Comfortable furnishings may have been key, but part of Fremont-Smith’s work involved gently nudging Heather out of her comfort zone. “Her style tends to be more conservative and neutral—a lot of white walls, not a lot of bright colors,” Fremont-Smith says. “This was such a fun project to work on because I was able to watch Heather’s personal style grow.” Although hesitant at first, Heather soon opened up to new possibilities. “What I love about Leandra’s design aesthetic is that she has a fun way of blending the traditional with the whimsical,” says Heather. The dining chairs in the kitchen are a perfect example. Heather says she never would have thought of using a faux-bamboo Chippendale chair set with an Asian-inspired fabric, but when Fremont-Smith said she had to have them, Heather agreed. “They added just the right touch to the space. I have learned to trust her vision,” she says.

Despite the home’s mostly open plan, there are rooms— “little destinations” Fremont-Smith calls them—that funnel one through the space. Fremont-Smith built the living room around a large sofa from Simply Home and a navy Dante Stria rug from Stark while also adding some fun patterns with pillows. “Leandra has an incredible eye for pairing patterns in unexpected ways that just make things work,” says Heather. Although Heather had veered away from wallpaper in the past, Fremont-Smith convinced her to try it in a small dose in the powder room. The blue Bungalo paper by Thibaut is a playful accent to Farrow and Ball’s Cooks Blue paint below the chair rail.

Today, not far from where her family and generations of family before them summered, Heather and her own family now enjoy their own slice of MDI. Being in town in Seal Harbor means that they are close to the coffee shop, the beach, and the town green, where most evenings you will find a dozen kids playing football, soccer, or hide-and-seek. “To me, MDI represents a simpler life,” says Heather. “Things just move a little slower here.” 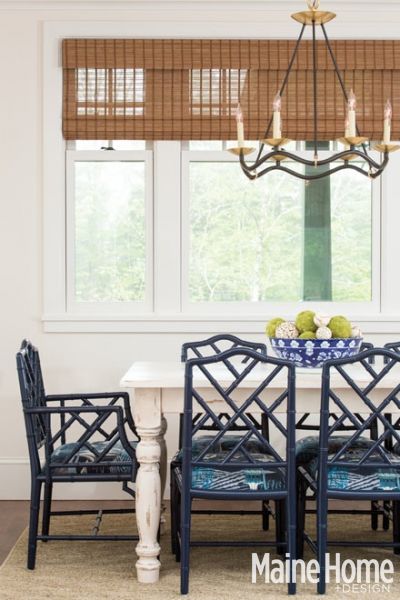 The navy Chippendale chairs in the dining room feature an original Schumacher fabric. “I never would have thought of using a faux- bamboo Chippendale chair set with an Asian-inspired fabric,” says Heather, “but when Leandra said I had to have them, I agreed. They added just the right touch to the space.” “These chairs would’ve been purchased for a house like this in the early 1900s, when people were traveling to China and then coming home and building summer cottages where they would put some of these pieces,” says Fremont-Smith. 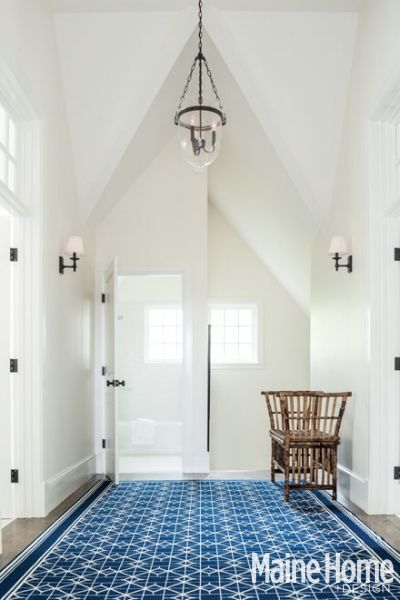 The upstairs hall features a bench from the Romantic Room, the Bono rug from Stark, and Ralph Lauren wall sconces from Fogg Lighting. 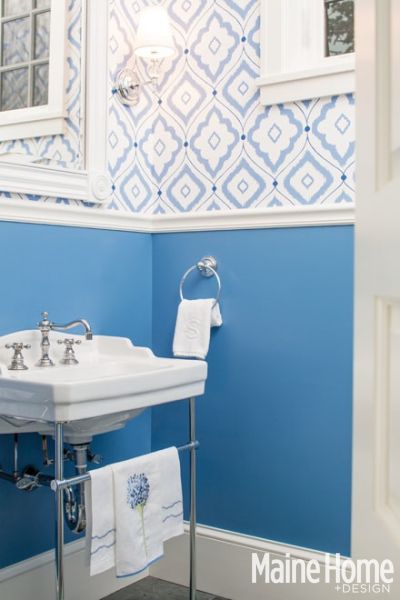 The powder room features blue Bungalo wallpaper by Thibaut above the chair rail, Farrow and Ball’s Cooks Blue paint below it, and a mirror and hand towels from the Kimball Shop.