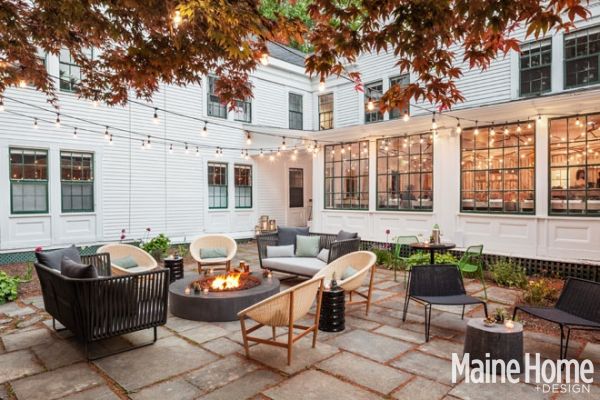 In the evening, lights in the restaurant and over an adjacent patio simulate a starlit sky. When they’re not kicking back in Kettal seats by the fire pit, guests can play shuffleboard and cornhole on an adjoining lawn. 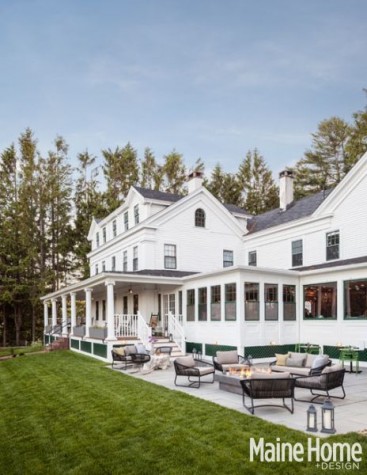 A scene from the 1957 movie Peyton Place was filmed on the hotel’s front porch. The exterior of the inn looks largely as it did when it was founded in 1901, save for a new bluestone patio installed this year by Mid-Coast Masonry in Rockport. The black wicker seating is from Mindo; Blu Dot supplied the green metal chairs. 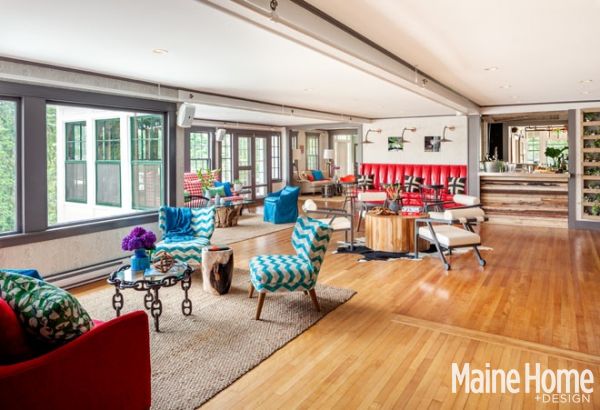 To make the vast lobby comfortable for a couple or a crowd, interior designer Rachel Reider carved out various seating areas. Precedent chairs covered in Mokum chevron fabric round out the first grouping. On the far wall, sculptural metal seats found online front a custom banquette in red patent leather. A rustic teak coffee table by Noir and vintage table crafted from anchor chain allude to the inn’s location between woods and water. 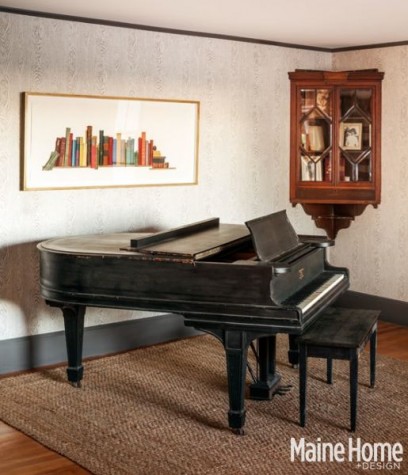 The “Millay Room” displays the piano the poet played on the night she was “discovered” at Whitehall, as well as a cabinet from her childhood home. Robin McCarthy’s mixed-media work Books plays up the theme. 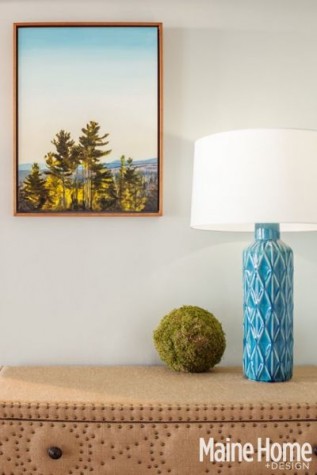 In the foyer, a burlap Noir chest, Arteriors ceramic lamp, and moss sphere bring out the colors and textures in Matthew Russ’s painting Trees on Tower Hill #2. 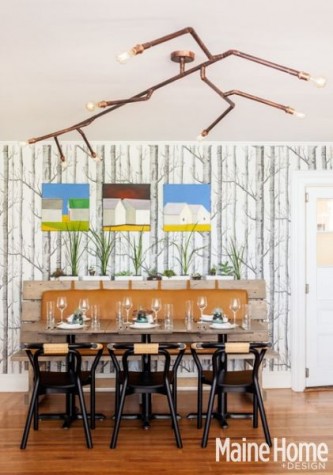 In the hotel’s restaurant, oil paintings by Jean Jack appear to be suspended from the Cole and Son wallpaper trees that hedge the room. Except where noted, Art Collector Maine supplied all of the artwork throughout (and it’s available for sale). Phi Home Designs in Rockport custom-made the pine benches and tables, and Inspired Wire Studio in Portland crafted the copper-pipe light fixtures. 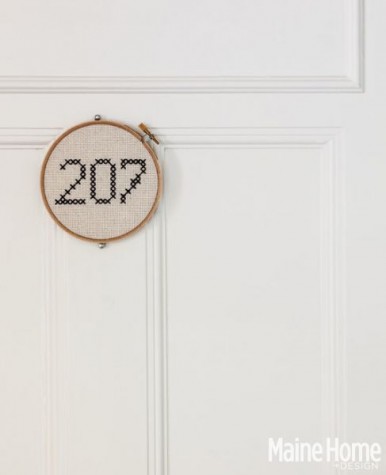 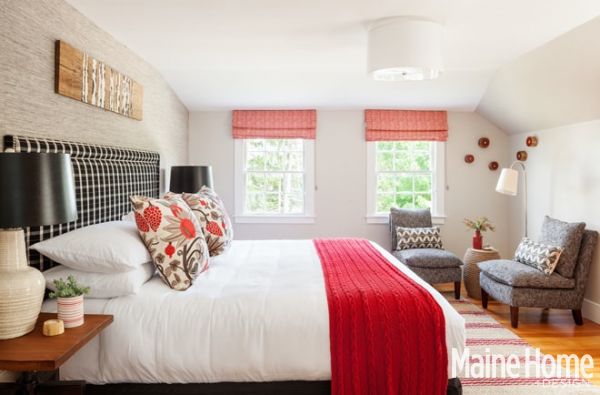 “Red rooms” like this one are balanced with notes of graphic black, seen in the Kravet fabric headboard, Arteriors lamps, and Lee Industries chairs upholstered in a Romo bouclé. Painted wood elements from Etsy vendors—Bissell Street Studios’ birch trees and a constellation of tree branch slices by Focus Line Art—bookend the space. 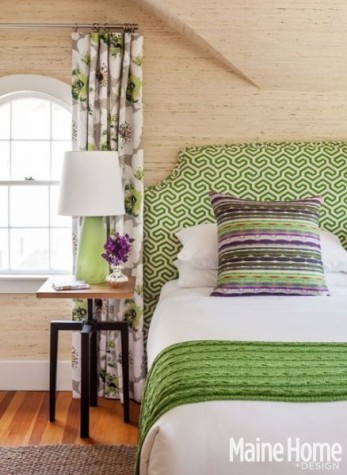 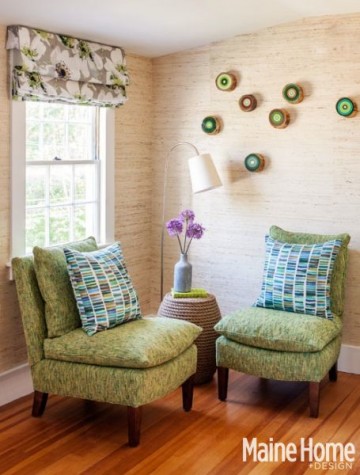 Focus Line Art custom made tree-branch artworks for all of the sleeping spaces, including this “green room”, which also features Donghia upholstery and Romo fabric pillows.

On Camden’s main drag, a historic inn gets a respectful refresh

On an August evening in 1912, Edna St. Vincent Millay sat at the Steinway in Camden’s Whitehall Inn and delivered 107 deftly crafted couplets: All I could see from where I stood / Was three long mountains and a wood; / I turned and looked the other way, / And saw three islands in a bay. And on it went for six stanzas, which Millay had famously composed atop Mount Battie, a rounded green peak that forms a cockeyed crown over Whitehall. After hearing Millay recite “Renascence,” a hotel patron helped arrange her entry into Vassar College. She went on to publish more than 20 anthologies and eight plays; in 1923, she became the third woman to win the Pulitzer Prize for Poetry. Millay had been invited to the inn by her sister, who worked there as a waitress, to perform in a talent show put on by the staff.

Today, the piano, which the poet also played that night, remains in the “Millay Room” off the foyer. A glass-front corner cabinet from her childhood home in Rockland displays artifacts given to the inn over the years: framed photographs, her high school diploma, and vintage copies of Renascence, and Other Poems, The Harp-Weaver, and Other Poems, and A Few Figs from Thistles. But a faux bois “forest” has taken root where floral wallpaper used to be, and the Oriental rugs have been swapped for sisal. Next to the cabinet, Jackie Avery’s abstract acrylic of a rosy- cheeked Millay against a teal backdrop offers a Warholian twist on a popular black-and-white portrait of the poet.

The changes are part of a sweeping redesign completed earlier this year by Lark Hotels of Amesbury, Massachusetts. The project transformed the inn’s voluminous lobby, 36 rooms and suites, and restaurant—now called Pig and Poet and run by Top Chef semifinalist (and one of People magazine’s “Sexiest Men Alive”) Sam Talbot. Splashes of bright turquoise, cherry red, and grass green on seating and throw pillows punctuate the Cole and Son wood- grain patterned wallpaper that envelops the living areas downstairs. The rustic-outdoorsy theme is reinforced by lengths of reclaimed crown moulding layered beneath the serving window that looks into the bar and an adjacent “live wall” planted with rows of herbs and succulents. The palette and rough-hewn materials, also seen in the sleeping spaces, were inspired by Camden’s tagline, “where the mountains meet the sea”—even the red, which was chosen for its “lobster-buoy-nautical-flag look,” says Rachel Reider, owner of Rachel Reider Interiors in Boston and director of design for Lark. “We wanted to create a marine feeling, but not in the typical navy-and-white way,” she says.

Built in 1834 as a farmhouse, the building was turned into an inn in 1901 by Ruth Barrett Ordway, a young widow who came to New England from South Carolina as a mail- order-bride. Under her stewardship, Whitehall became a destination for Camden’s elite summer visitors, who often lodged for two months at a time. Early guests included screen sirens Mae West and Tallulah Bankhead. Later, Bill and Hillary Clinton, baseball Hall of Famer Sandy Koufax, King Abdullah II of Jordan (then a crown prince on his way to summer camp), Walter Cronkite, John Travolta, Kirstie Alley, Bianca Jagger, and Jenna Bush Hager came to stay. J.C. Dewing, whose family owned the inn for 34 years beginning in 1971, remembers getting lost in conversation with Billy Joel at the bar. “We were talking about shark fishing in Montauk when Christie Brinkley came up behind us and started clearing her throat; it was probably the first time she walked into a room and nobody noticed,” says Dewing. “But that’s what Whitehall has always been—a welcoming place to meet and mingle and, yes, maybe get a little caught up.”

Lark CEO Rob Blood and his wife, Leigh, the director of internal operations, were among the inn’s admirers, having stayed there when they were dating and during their honeymoon. “We felt a responsibility to preserve the historical character of a place we loved, while instilling a modern sensibility,” says Blood, who collaborated with Reider, chief inspiration officer Dawn Hagin, and contractor Ryan Lawrence of Phi Home Designs in Rockport. Leaving the bones of the structure intact, the building crew commenced what Lawrence calls “an intense sprucing-up,” replacing most of the roof, painting the exterior, reframing the front porches, and installing a new bluestone patio between them.

Inside, the team resurfaced all the plaster walls and rewired the whole place to accommodate smart TVs and bedside phone charging. Many of the inn’s original pedestal sinks and clawfoot tubs remain in the rooms, but the latter are now brightly painted to match the new color scheme. In the hallways, Angela Adams’s camouflage-like Ocean carpeting in custom blues and greens is laid over 100-year-old maple flooring that is charmingly sloped in spots.

When the Lark group began discussing design concepts, Blood mentioned Steve Kelly, this magazine’s associate publisher, whom he knows professionally. “Steve has a style I call ‘dapper flannel’ that personifies the kind of updated Maine I wanted to capture at Whitehall,” says Blood, who went so far as to send Reider a photo of Kelly dressed in rolled-up jeans, a black and white checked button-down shirt, and straw fedora. “This story is embarrassing, and Rachel was appropriately horrified, but when you look at our ‘red guest rooms’ you can see what I’m saying.” There you find black-and-white plaid Kravet fabric headboards placed on (straw-like) gray grasscloth accent walls. The namesake ruby shade shows up on Sister Parish Burmese-print window treatments, botanical Osborne and Little fabric on the pillows, and In2green cable-knit throws, elements that help soften a look that reads as sophisticated yet approachable, like a certain esteemed colleague.

The inn’s “green rooms” are more feminine, with Greek- key Schumacher fabric headboards, floral Romo window treatments, frosted glass Arteriors lamps, and knit throws rendered in bold leaf tones. Sand-colored grasscloth wallpaper brings coziness, as if the rooms themselves are wrapped in warm blankets. The “Lark Suite” is the most spacious accommodation and an outlier, with a custom crimson faux-leather headboard and matching cotton twill Room and Board sofa juxtaposed with aqua and white tie- dye-patterned Harlequin wallpaper and curtains. “This is our Americana room, with an updated take on red, white, and blue,” says Reider. “Our hope is that among the three schemes everyone finds something appealing.”

The palette neutralizes in the restaurant, which Reider worked on with Talbot. “We wanted most of the color to come from the food,” says the designer, who emphasized rich texture instead. Lifelike tree sketches on Cole and Son wallpaper surround the expansive space, bringing the lobby’s gauzy forest theme into sharp focus. Copper-pipe and rope light fixtures crafted by Inspired Wire Studio in Portland dangle like primitive chandeliers over the bar, which features salvaged crown moulding for paneling and a zinc top on the cocktails side; the oyster-tasting end is zinc with a live-edge pine counter. Calderesque pipe lighting fixtures from the same company form a branch- like canopy over the distressed pine dining tables.

Moving from the restaurant into the Technicolor world of the lobby, your gaze inevitably lands on the Millay portrait, which Blood admires for the “sense of mischief” it brings to the inn. Indeed, reexamining the poet’s steely, twinkly-eyed face, you half expect the pursed lips to part and a voice to burst into verse. 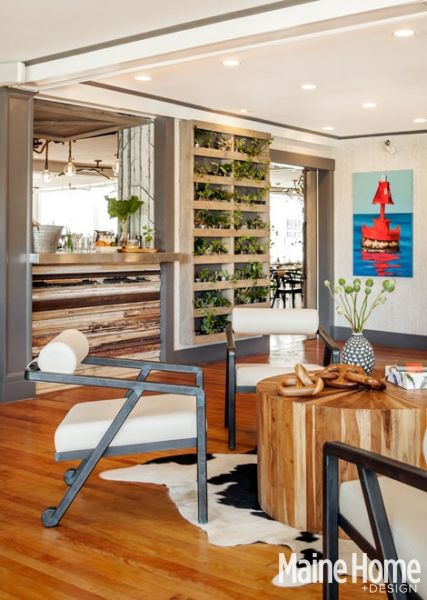 In the lobby, a “live wall” planted with herbs and succulents offers a leafy counterpoint to the faux bois and bare trees wallpaper motifs. Lengths of reclaimed crown moulding adorn the area beneath the serving window. The oil painting Red Buoy No. 18 is by Caroline Loder. 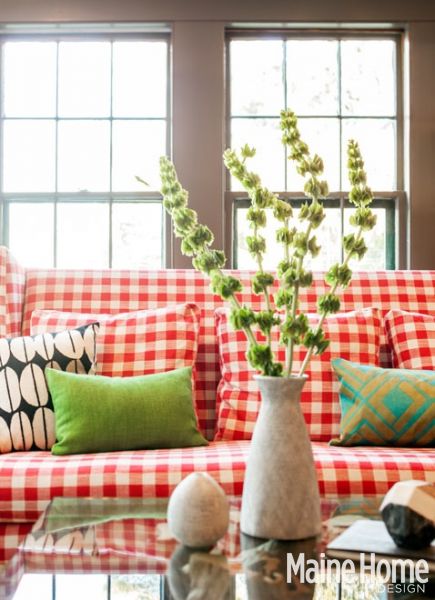 A sofa in the lobby is upholstered in a Romo buffalo-check—a pattern that first appeared on Woolrich shirts in the mid-1800s. The pillow fabrics are from Judy Ross, Trina Turk, and CB2. 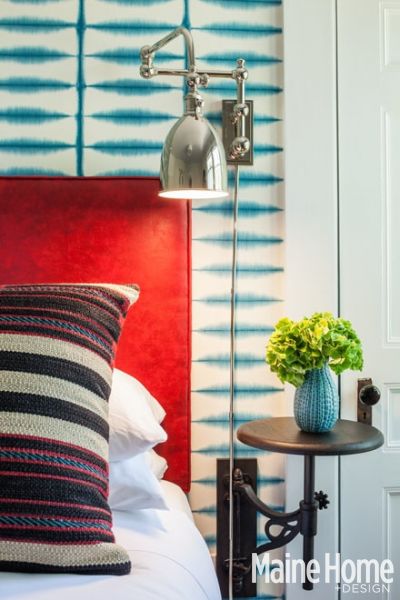 Fitting king-size beds like the one in the Lark Suite into a 180-year-old home required some creative thinking. Here, a wall-mounted Michele Varian table and compact Visual Comfort sconce maximize a tight space. The pillow fabric is from Kravet’s Ralph Lauren collection. 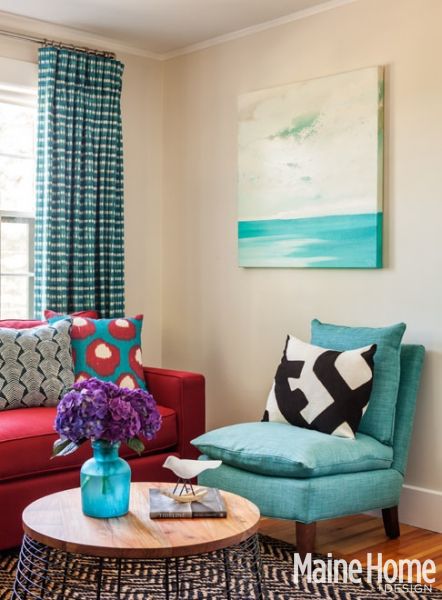 Bold pillow fabrics from Lulu DK, Peter Dunham, and West Elm unify the brightly colored seating in the Lark Suite. The table is from Noir, and the oil painting, Simple Syrup, is by Allen Bunker.