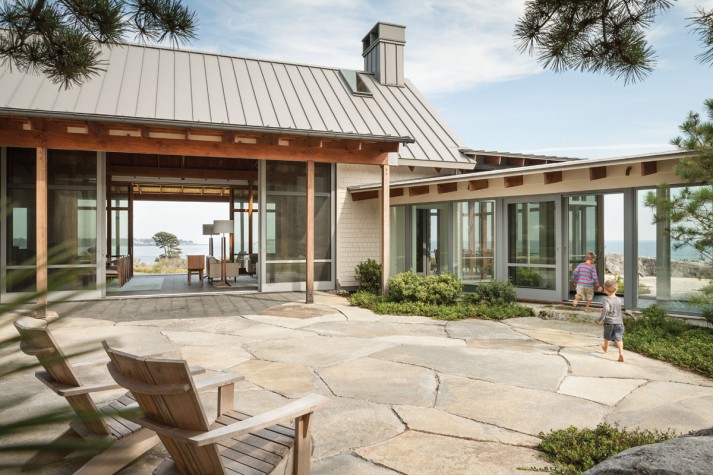  From the courtyard, you can see through the home to two distinct views: the southern tip of Cape Elizabeth beyond the living-dining area and the open ocean on the other side of the glass corridor. Landscape architects Todd Richardson and David Maynes developed the master plan for the site, and Gnome Land- scapes, Design, Masonry, and Maintenance in Falmouth filled it in with stone patios, walk- ways, and walls, and native plantings such as the wild blueberries shown here. 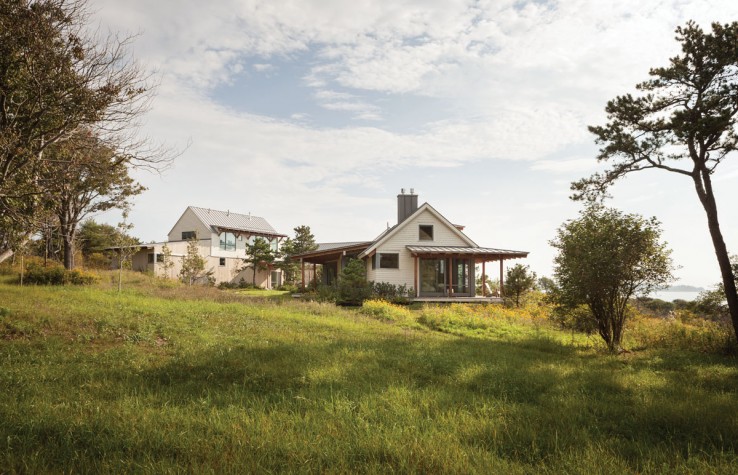 A mowed path through the field leads from the courtyard to a lookout spot in the woods. 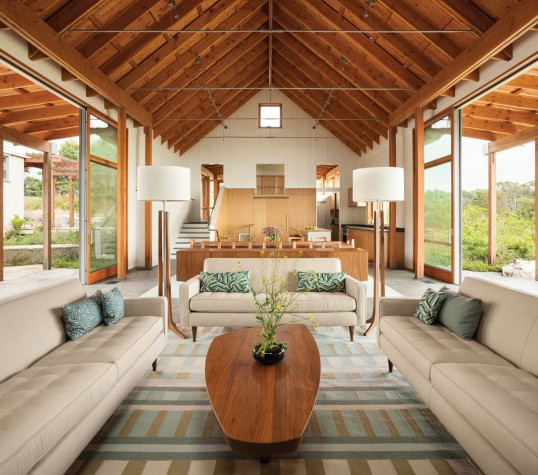 nterior designer Nadine Cole used Cerno floor lamps and an Angela Adams sideboard, both in walnut, to set off the living area, which is further defined by a trio of canvas Room and Board sofas. The walnut coffee and dining tables, rugs, and patterned pillows are also by Angela Adams. 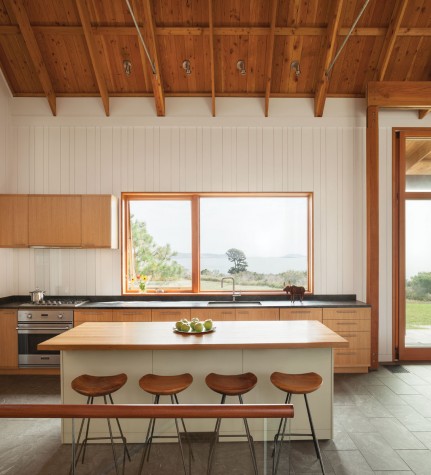 The house contains more than 30,000 linear feet of nickel-gap paneling, seen here in the kitchen. Contractor Scott Lewis of Wright-Ryan Homes made sure that wherever grooved boards meet vertical trim, the lines match up precisely. “It takes careful planning to make something look so simple and orderly,” he says. Wright-Ryan Millwork crafted all the cabinetry in the home, including these white oak cabinets. Morningstar Stone and Tile in Topsham provided all the stone countertops (here in Church Hill soapstone). Brunk Tile in Buxton supplied and installed all the tile, including the slate flooring shown here. 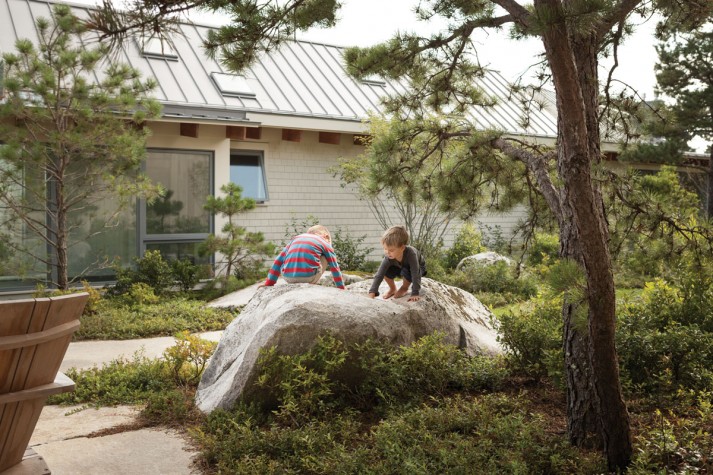 In the courtyard, boulders, low- and highbush blueberry bushes, and pitch pines specified by Richardson’s team reference the natural habitat around the home. 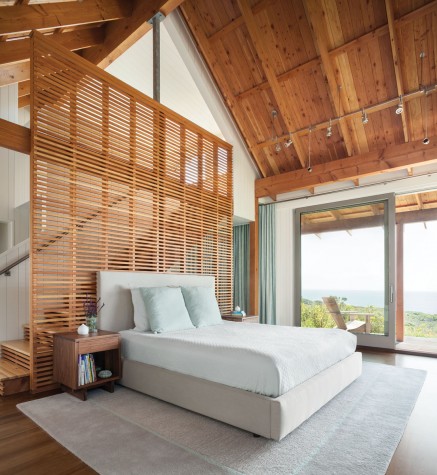 A canvas Room and Board bed offers a soft counterpoint to the slatted fir partition that commands the owners’ suite. The L-shaped band on Angela Adams’s Winnie rug, customized with a narrow aqua stripe to match the Kerry Joyce fabric drapes, “delineates the path to the porch,” says Cole. 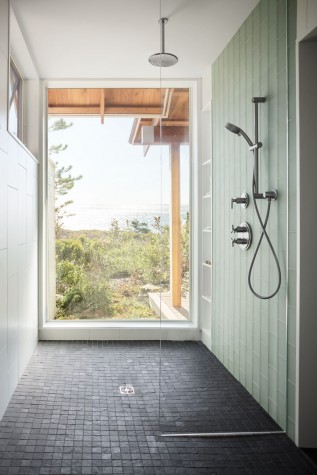 Their bathroom features an eight-foot-long floating vanity topped with North Jay granite from J.C. Stone in Jefferson, and roasted birch flooring from A.E. Sampson and Son in Warren. 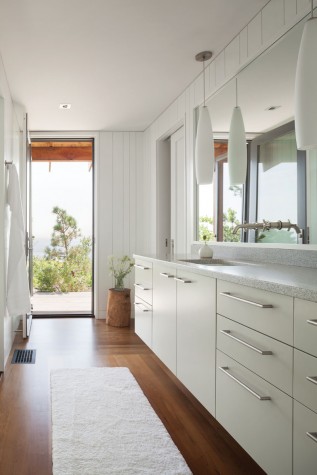 In the owners’ shower, the colors of celadon glass wall tile and a slate tile floor segue into the leaf and stone shades outside. 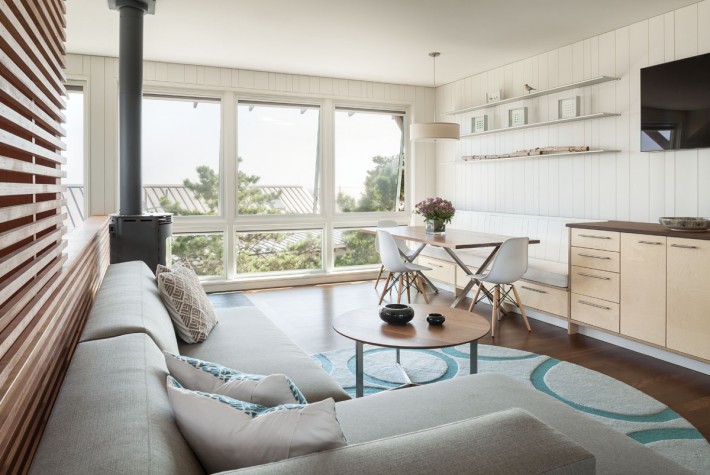 From the guesthouse living area, you can see over the bedroom wing of the main home to the ocean. The sectional, upholstered in linen-like fabric, and walnut coffee and dining tables are from Room and Board. The cabinetry is Baltic birch with a Richlite counter. 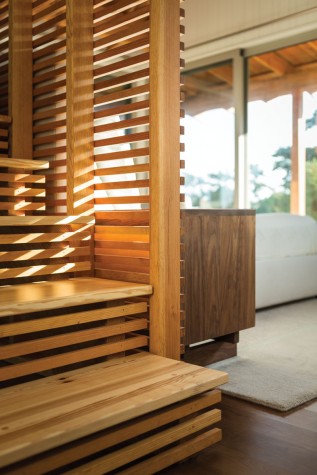 In the owners’ suite, slatted fir stairs lead to an office loft. 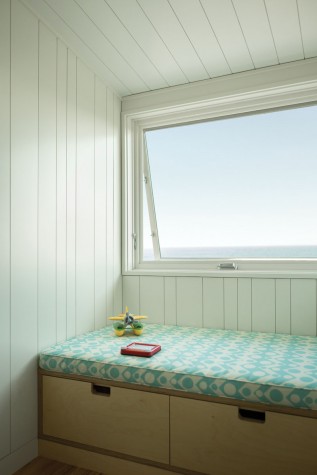 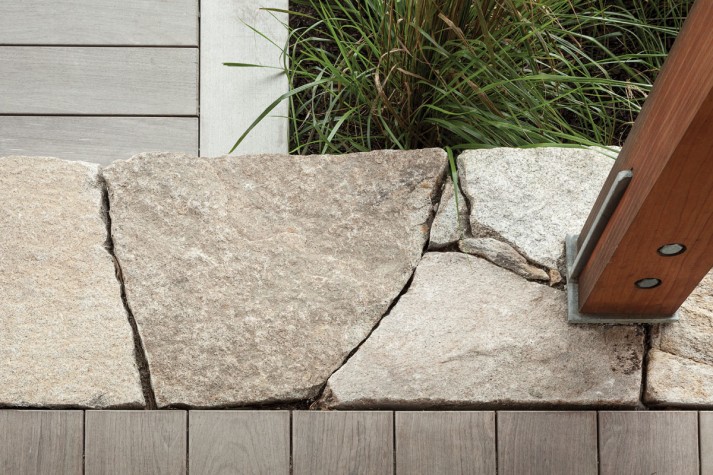 A galvanized steel knife plate, one of 50 used in the project, secures a fir post to the base of a fieldstone wall along the entry porch. Contractor Scott Lewis had each plate handcrafted to suit its location. 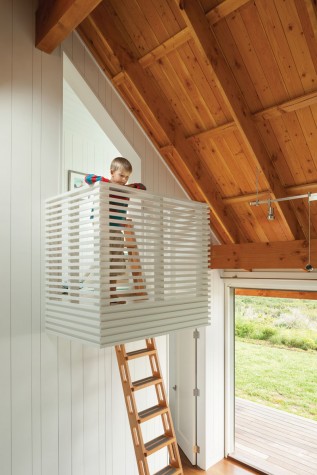 “The first things the kids latched onto was their lofts”, says the homeowner. “They disappear up there for hours.” 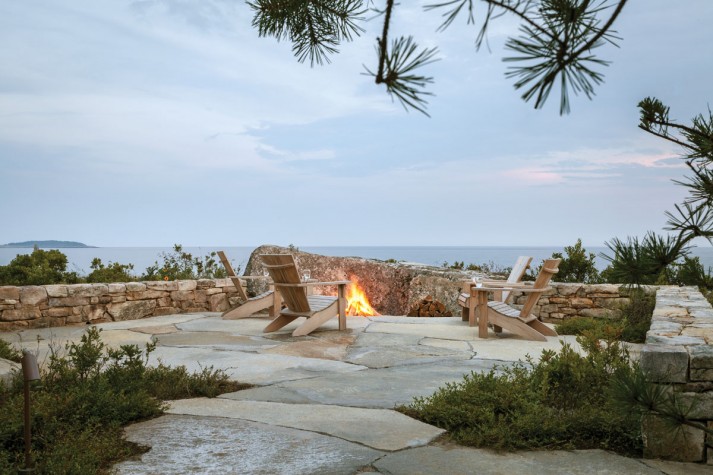 A mossy monolith borders the fire pit on the waterfront patio. 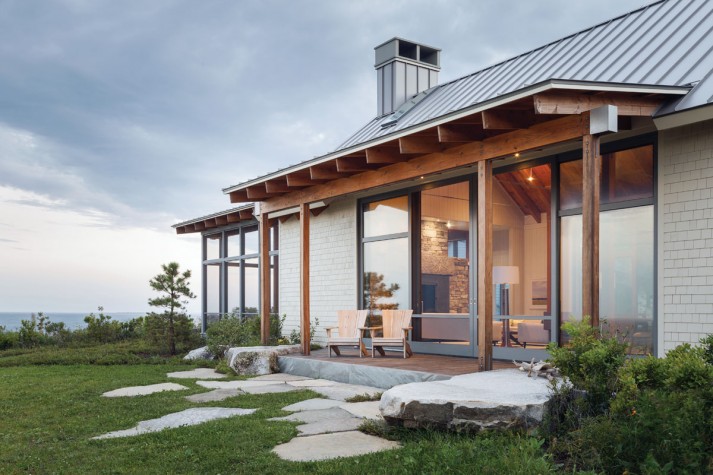 Granite slabs dissipate into the grass by the eastern entrance, transitioning the building into the landscape. Massive sliding glass doors by Maine-based Duratherm connect inside to out.

When Nick Martin, the founder of a popular online dating service, and his wife, Penny, decided to make a home in Maine, the property search played out like one of the success stories on his site. There was the setting-priorities phase (definitely the southern region, definitely on the water), the exploration stage (Lake or ocean? Build or renovate?), and the moment each party “just knew.” Nick was certain he’d found The One the first time he laid eyes on their 36-acre Scarborough plot during a solo scouting mission in 2012, but he didn’t share his feelings with Penny. “I wanted to see if she felt the same way without me putting any pressure on her,” he says. When they returned together later, “My first words were, ‘I can see our kids getting married here,’” says Penny of the land, with its tree-ringed fields sloping down to a shimmering band of blue. “To this day, every time we come down the driveway, I think, is this place for real?”

Nick grew up in South Portland and spent summers on Peabody Pond in Sebago. After he met Penny and they settled in New York City, he pictured Maine vacations, with his kids “running down a dock into a lake.” They started out renting in the Sebago region, then switched to the southern coast to be closer to Nick’s family and the airport. Visiting the Scarborough property, “I was struck by how it felt even more like Maine to me than my childhood here,” he says. Four of the state’s major ecosystems converge on the site: shorefront, forest, wetland, and meadow area, which are largely set aside for conservation. Then there’s the quintessential white-capped ocean view, here punctuated with the serpentine slope of Richmond Island and the twisted limbs of a few pitch pines. And while dock jumping is not an option in these parts, the couple’s son, 4, and daughter, 6, have a new calling: “They wander around like little scientists, collecting treasures and looking at animals and birds,” says Penny. “It’s the antithesis of our other life.”

The magnificence of the site made the question of what to build there particularly daunting. Whitten Architects in Portland presented four schemes to the couple, who selected a design concept spearheaded by architect Russ Tyson. “When we first discussed our dream home, I drew a layout that looked like the Brady Bunch house on a cocktail napkin,” says Penny. “It took seeing Russ’s design for us to realize that a vertical house was not right for this wide-open property.” In his plan, the core elements of Mike and Carol’s castle—open living-dining area, office, two kids’ rooms, owners’ suite—are divided between a pair of one- story shingled structures joined with a glass corridor. A Douglas fir pergola brings a two-story garage-guesthouse into the fold. The resulting building triad, centered on a protected courtyard with a granite patio, “allows the landscape to flow through the home and provides an incredible number of opportunities for people to get outside,” says Tyson.

Massive sliding glass doors flank the living area, which gives way to an expansive screened porch, then a waterfront patio and fire pit. Each of the four bedrooms in the main house also has a sliding glass door that opens onto a porch; two more sets of exterior doors transport you through the windowed entryway and corridor. Sedan-size boulders, strategically placed with a 90-ton crane, create the effect of a home “rising out of rock that has been there forever,” says contractor Scott Lewis of Wright-Ryan Homes in Portland. At the eastern entrance, flat- topped stones slice into a granite porch floor, which is planted along the edges with wild blueberries. Another behemoth cuts into a corner of the front entry porch and through an adjacent fieldstone wall. Two of the home’s Douglas fir support posts rest on the same wall, further blurring the line between the structure and its surroundings.

A grove of apple trees follows the stone wall along a granite walkway and into the field that fronts the entryway, creating yet another segue. “Our goal was to introduce bold elements that reach out and grab on to the larger site,” says Saco landscape architect Todd Richardson. For the beds around the home, he chose masses of salvia, ornamental grasses, and low- and highbush blueberries. Wildflowers transform the hill overlooking the ocean into a blur of bright color in the warm months. “Traditional groupings of three or five perennials would be lost here,” he says. In the courtyard, partially buried boulders and 25-foot-tall pitch pines that his team planted before construction was complete mimic the ledge and vegetation on the shorefront.

Tyson and the Martins identified their favorite view early on—a stretch of field and water with a giant pine in the foreground and Cape Elizabeth and Richmond Island beyond—and the architect constructed a narrative around it. Snippets of the scene are visible through narrow banks of windows in the moderately sized entryway and mudroom. But the real drama happens when you descend the stairs to the living area, with its soaring Douglas fir–framed ceiling and sliding glass doors capturing a panorama of blue and green. On the opposing wall, identical doors showcase the intimate, wooded courtyard. The buildup and juxtapositions replicate the feeling of reaching a mountaintop after trekking through the forest. Situating the room between two contradictory outdoor spaces heightens the thrill: “That expansive view is more spectacular because of the contrast the courtyard provides,” says Tyson.

In the kids’ and owners’ bedrooms, Tyson combined broad, open ocean views on the main floor with more truncated scenes in the small loft spaces overhead. “With such grand living spaces, we wanted to include nooks for people to retreat to,” he says. The children’s hideaways have a treehouse feeling, with ladders leaned into box-shaped balconies. In the parents’ room, a slatted fir partition sets off the stairs leading to the loft, which Penny uses as an office, and effects an enormous headboard behind the bed. “The ‘secret spots’ are some of our favorite places in the house,” she says. “You feel like you’re in your own little world.”

The home’s bold Douglas fir framing and Jet Mist granite flooring in the living area created a ready-made palette. Kittery interior designer Nadine Cole balanced the warm and cool components with a sculptural Angela Adams dining table, sideboard, and coffee table in natural walnut—“a true neutral shade without hints of red or yellow,” she says. Off- white wall paint and sand-colored Room and Board sofas maintain the equilibrium while adding subtle contrast. Graphic Angela Adams rugs and throw pillows enumerate the blues in the seascape outside and energize the scheme.

On warm mornings, the family has breakfast on the screened porch before setting off for the beach or the network of national- park-quality trails Richardson carved out around the property. Later, the kids often play in the sun-dappled courtyard, “where they feel free, but we can keep an eye on them,” says Nick. After dinner, everyone gathers by the fire pit on the oceanfront patio for s’mores and stargazing. When they can steal a moment alone, the couple likes to head to a little clearing in the woods off their bedroom. From a stone landing there, they can glimpse another place that’s close to their hearts: the long arc of Prouts Neck, where they were married. The curve of their land partially surrounds the distant sliver, as if it understood the scene needed a frame. 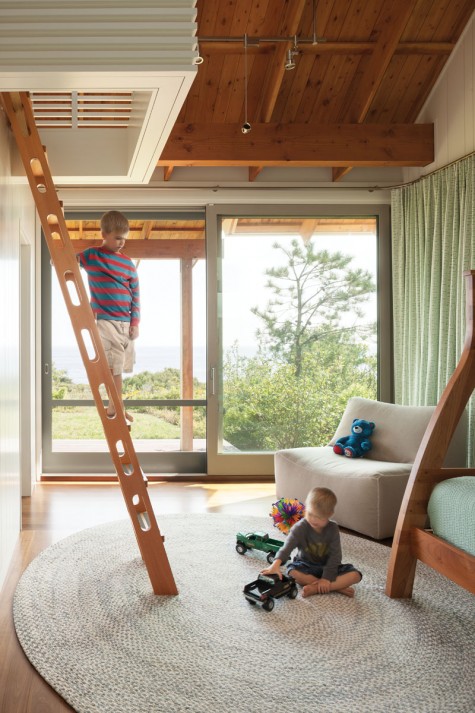 The son’s room and daughter’s room have tree-house-like lofts and a shared porch. The Room and Board chair is covered in Sunbrella canvas so it can also be used outside. 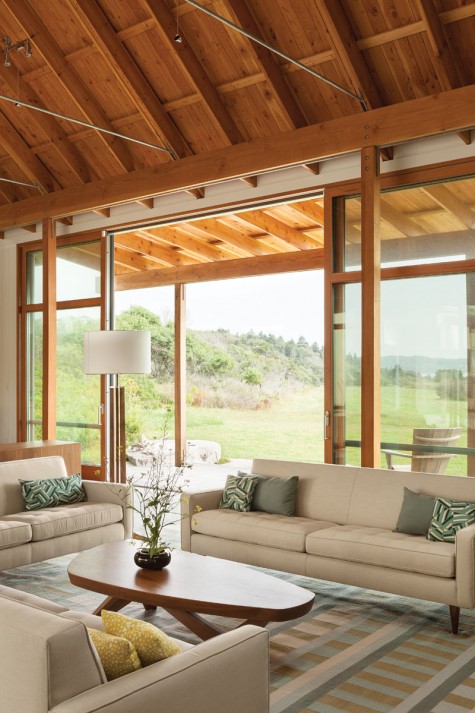 Twenty-four-foot-long steel beams encased in Douglas fir support the roof in the living area, allowing the team to use larger sliding glass doors than they could have with traditional framing. 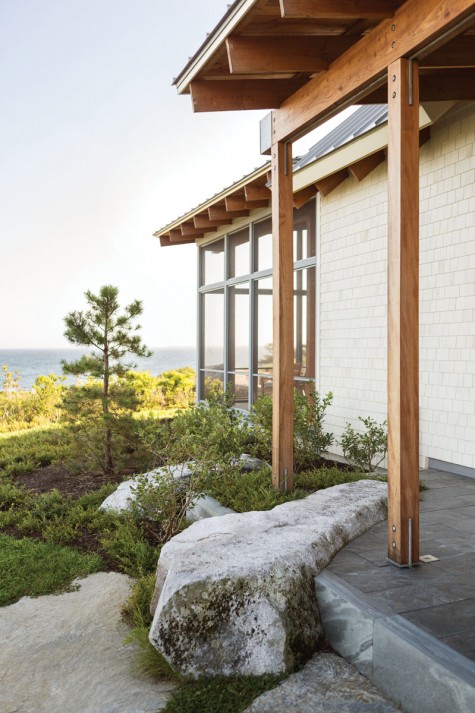 At the eastern entrance, a flat-topped boulder and blueberry plantings jut into a granite porch floor.