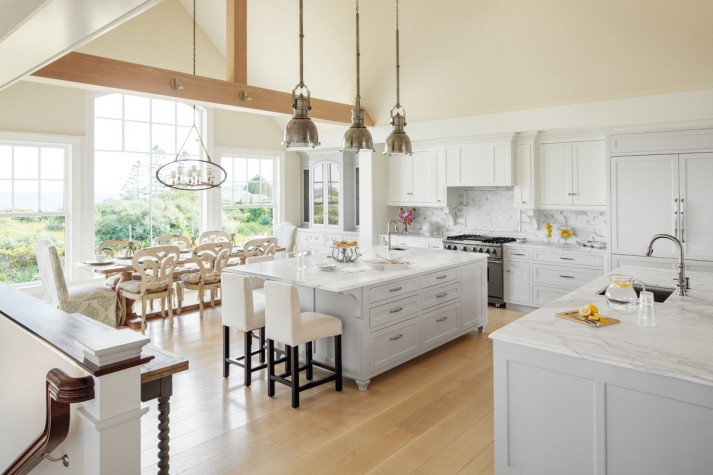 The homeowner told Knickerbocker Group that she wanted her kitchen “open, open, open” and everything “white, white, white.” The design-build firm provided that, as well as double kitchen islands (one for eating and one for working), industrial pendant lights, side- by-side refrigerators, and a fir crosstie that prevents the cathedral ceiling from feeling too big. The design emphasizes drawers rather than cabinets for storage. 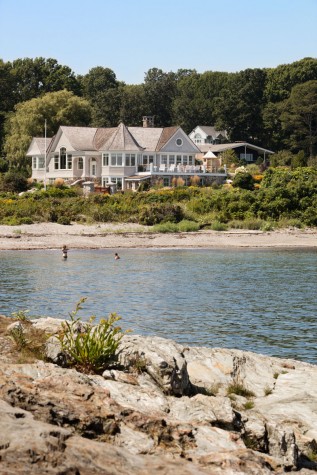 A view of the house from the beach shows the rooflines of the front and side, as well as a stone terrace. 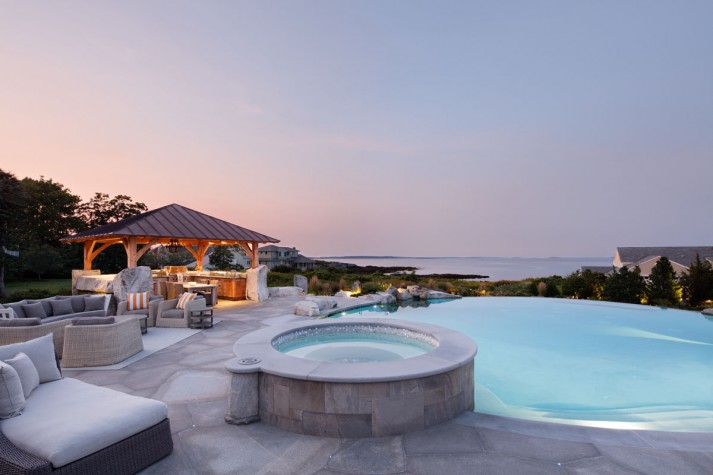           An infinity-edge pool from Tapley Pools and Spas (who also did the hot tub) seems to blend into the Atlantic. Massive granite slabs envelope a cabana with outdoor kitchen. The post-and-beam structure was designed by Knickerbocker Group and provided by Maine Barn Company in Newcastle. At night, the patio floor’s fiber- optic lights suggest stars. 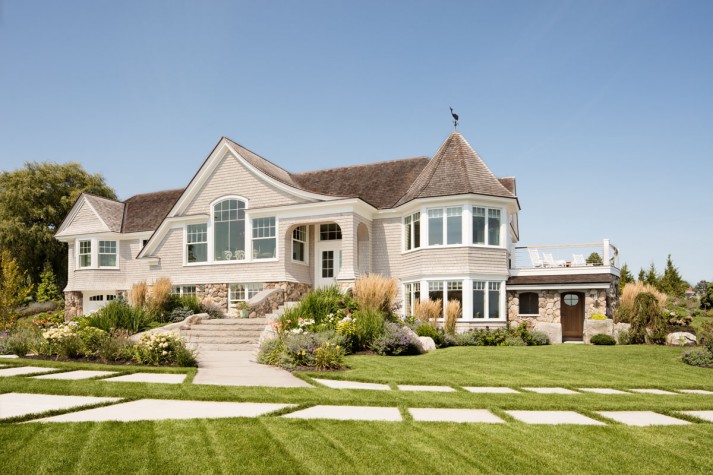 The renovation made some changes to the roof forms and created new roof overhangs. The stone veneer is new, as is the front entry with a swooped roof above. The granite pavers interspersed with grass give a softer look to the driveway, which curves from one mahogany entry gate to another. A beach entrance to the right includes an outdoor shower made of granite. 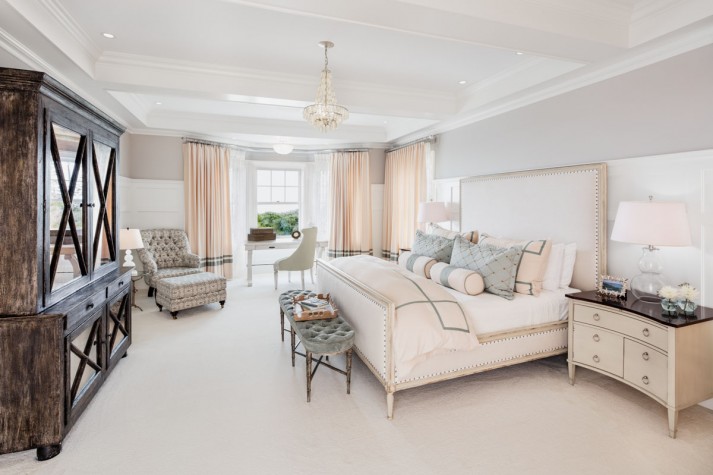 The owners’ bedroom includes a chandelier made from capri shells, a coffered ceiling, an upholstered headboard and bed frame, and window treatments that include sheers made from Anna French fabric. The layering of textiles, textures, patterns, and tones is important to how one experiences the plush yet restful space. The neutrals are highlighted with a bench and pillows in seafoam green. 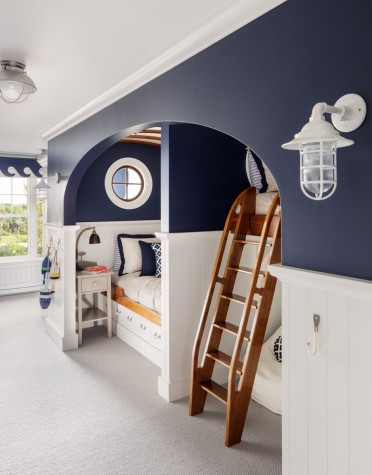 The boys’ bedroom features cabin-style bunks and nautical blue on the walls. 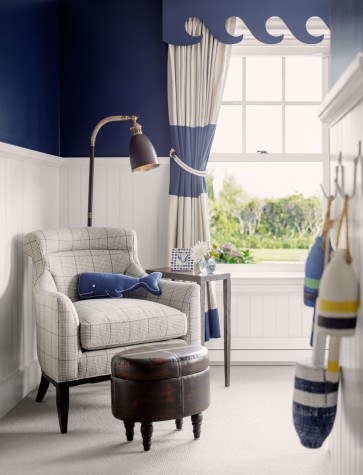 A corner of the nautical-themed boys’ bed- room with window valances in the shape of waves, ship buoys, linen and cotton striped curtains tied back with rope, and a whale- shaped pillow. 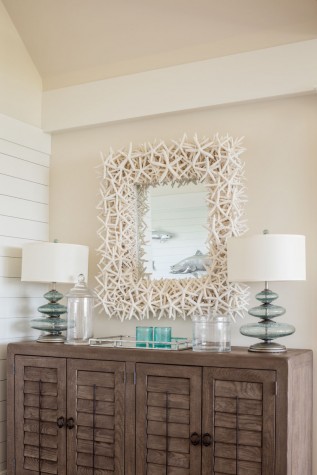 In a corner of the kitchen, a starfish mirror sits over a dresser topped with lamps with celadon green crackle glass and linen shades. Nickel-gap paneling accents the wall to the left. 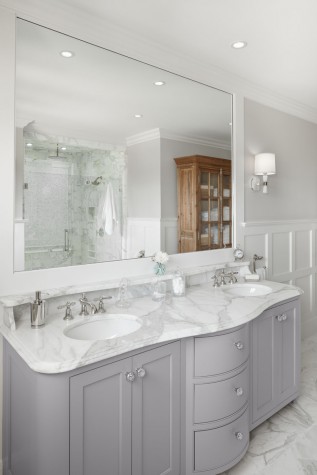 The owners’ bathroom features a double sink and curved vanity with a Calacatta marble top.

An elegant vacation home with fantasy spaces, indoors and out, for all ages

I grew up in a neighborhood of modest colonials and split-levels. Back then, in the ’60s and ’70s, it seemed clear to me that my neighbors in the split-levels had gotten the short end of the suburban housing stick. They were fun houses with a downstairs that usually felt like a playroom, but there wasn’t much light down there, and the upstairs felt full of spaces—the formal living room and dining room—that no one ever used. People live in split- levels differently and more imaginatively now. Even so, when I learned that Knickerbocker Group of Boothbay and Portland has remodeled a seaside split-level, I was puzzled. I couldn’t quite picture it, given the kinds of projects I know they do: high-end, finely detailed, and unique.

“A split-level has design challenges in terms of circulation and lines of sight,” Knickerbocker architect Rick Nelson allows. The seaside split-level had other issues. It didn’t connect well to its environment—a clear shame, given its views of the open ocean. What’s more, the homeowner had bought the house from her father, but she had two young children and planned to live in the space in a very different way than her father had. She didn’t want anything formal. Instead she wanted a kid-centric vacation home, where she and her husband and children could come to relax.

Even with the advance information, I’m not prepared for what I see when I arrive at the house. Behind a handsome mahogany driveway gate and among lushly landscaped garden beds, the house reads as a classic shingle-style with a turret, a swooping roofline over the front door, and fieldstone veneer above the foundation. The entrance leads, indeed, to a split-level, but inside, I don’t find the claustrophobic stairwell of the olden days but an expansive upper floor and the clean lines of a ground-floor hallway. I’ve already been told the upstairs is open-plan, but rather than looking like a great room—a single space where furniture or a kitchen island announce different functions— the floor looks like a house in which all the interior walls have simply dissolved. Everything is indeed open, but defined by architectural elements: moulding and trim or varying ceiling styles and heights. To the left there is a large kitchen/ dining room with a cathedral ceiling and huge windows that overlook the ocean in one direction and a large yard in the other. The look is simultaneously elegant, edgy, and cottagey, with Calacatta marble for the two islands in the kitchen (one for cooking, one for eating), oversized pendant spotlight lamps that lend an industrial feel, and nickel-gap paneling on part of the walls. Ahead, there is a living room with a cathedral ceiling, clad in fir, and to the right, in the turret, there’s an octagonal space that the homeowner calls “the ladies’ lounge.” In its previous incarnation, the room had a dining table and chairs. Now upholstered chairs are arranged companionably around a large ottoman and under a domed ceiling of whitewashed fir, perfect for an evening cocktail. Hidden away is the owners’ bedroom. Plush yet serene, its look is inspired by a singular find: an upholstered bedframe.

The downstairs of the house is all about the children. “It’s what I would want if I were them,” the homeowner says. Here, there is a boy’s room, a girl’s room, an art room, and a playroom, all imagined as fantasy spaces. The blue boy’s room is fashioned to seem like the interior of a boat, with cabin-style bunk beds, port-hole windows, rope pulls for dresser handles, buoys and paddles on the walls, and a window valance edged with wave shapes. The pink girl’s room has an anteroom that serves as a dressing space with a wall mirror and ballet bar. The bedroom itself has a bed covered in custom pink linens facing a window under which there is a small stage. The window drapery also functions as a theater curtain and can be remote-controlled for performances. When not in a thespian mood, the daughter can close the curtains and turn her stage into a reading nook. On the ground floor of the turret is an art room, where a central table is surrounded by a built-in bench, an apothecary’s cabinet with drawers for treasures, and built- in cabinetry for art supplies. Above the table, a chandelier with clips holds little pieces of paper. A Maine artist—Brad Betts—has created multiple small watercolors of sailboats for the chandelier, but as time goes on, the children can create their own drawings and attach them to the light.

In addition to the children’s rooms, the ground floor has a TV room with a Murphy bed and a tiled room with shower, bathtub, and a drain that lights up when water hits it. Among the fun features of this level is a beach entrance with an outdoor granite shower just outside, which has protruding bits of stone that serve as soap shelves.

Two of Nelson’s Knickerbocker colleagues, interior designer Brady-Anne Cushing and lead designer Leah Lippmann, worked “to open up spaces, to add color and light, and to make a more calming and vibrant space than before,” says Nelson. Upstairs, the emphasis is on whites, neutrals, and a subdued seaside palette—the lightest of foam greens or ocean blues. The idea, says Cushing, was simply to frame the view. That said, the frame is decidedly elegant and includes custom curtains and valances of Cushing’s design.

Throughout the house, Cushing and Lippmann used textures to create additional visual interest and depth. For instance, in the living room, soft draperies that puddle on the floor hang over grasscloth woven shades. The furniture includes wood-frame chairs wrapped in nubbly sea grass, couches and ottomans covered in smooth linen, a rug with a raised flower design, and pillows embroidered with images of coral reefs. The space is further detailed with an anchor design for the fireplace screen, new paneling for the walls, a pull-out drawer for fireplace wood, and shelves decorated with starfish and coral.

Materials and nautical decorative items recur in a way that ties the entire house together. The marble of the kitchen islands is also used for the kitchen backsplash, bathrooms, and powder room. The fir of the living room and ladies’ lounge ceilings is employed for the collar ties in the kitchen. The floors are largely oak, chosen for being such a hard, and thus kid-friendly, wood and include an occasional surprise, like the inlaid wood and metal compass rose between the ladies’ lounge and living room.

Originally, there had been a powder room and laundry room at the rear of the house. These rooms disappeared in the remodel, absorbed into the kitchen and replaced by a new back entry, which features French doors that lead to a wide grass yard with a play structure. A steel and mahogany fence separates this area from what once was a ranch house and is now an elaborate pool area that includes a hot tub, infinity-edge pool, and cabana, as well as ledge outcroppings that make for, among other things, a stone diving board on an upper level and a rock stream and wading pool on a lower. The granite terrace is imbedded with fiber-optic lights that suggest stars when illuminated. Knickerbocker Group worked closely with landscape architect and designer Arek Galle of BETA Group in Lincoln, Rhode Island, to make sure that the visual lines of the exterior landscape would flow seamlessly with the interior lines of sight. Galle says he tried to “be selective about how we established views outward,” as he wanted to capitalize on the setting while ensuring privacy, given that the house is in a well-established residential neighborhood.

Another surprise about the project is that the homeowner was an absentee client; she was engaged in the process, but from her home in Florida. “It was easy to do, actually,” says the homeowner. She put images of her dream house up on Pinterest but otherwise came to Maine only once for consultation. After a certain point, Lippmann says, she understood the homeowner’s desires so well that she just knew what to pick. Steve Malcom, owner of Knickerbocker Group, says of the homeowner, “She trusted us on making decisions. She gave us the green light to suggest.” Even so, there was a final surprise for everyone when the homeowner first saw her home: She cried. It was exactly what she wanted. 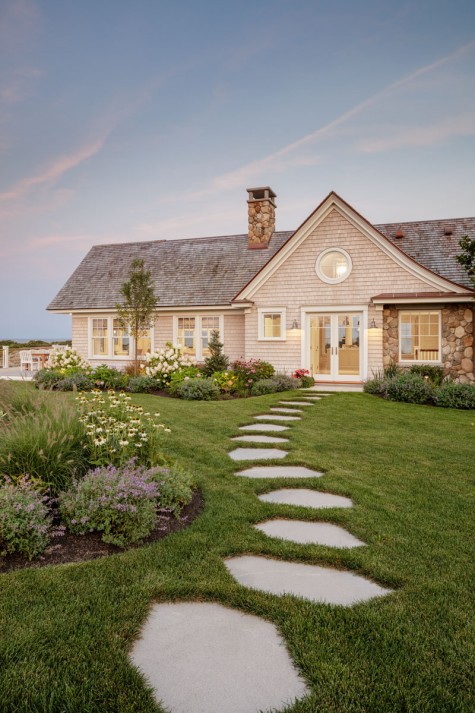 Originally the house didn’t have a good connection from the living spaces to the exterior landscape. A new entrance at the back helped solve that problem. The path goes from the house, through a yard with a play structure, to the pool area. 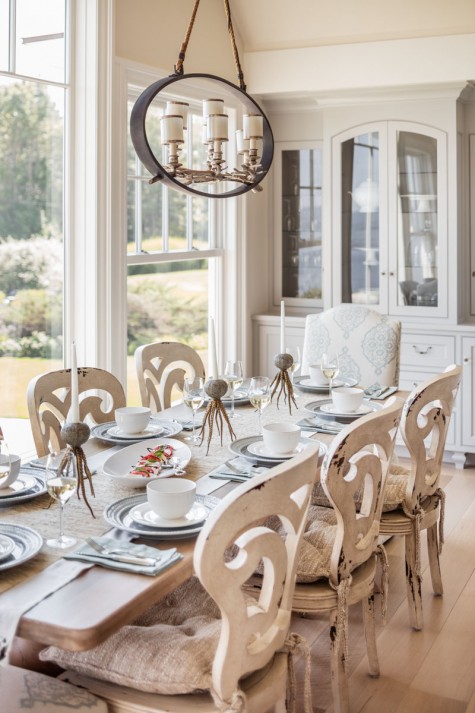 A custom table sits next to oversized windows that afford views of the beach just across the street. The glass-fronted built-ins are painted a light gray, a variation from the whites that otherwise dominate the room. The chandelier is oil-rubbed bronze. 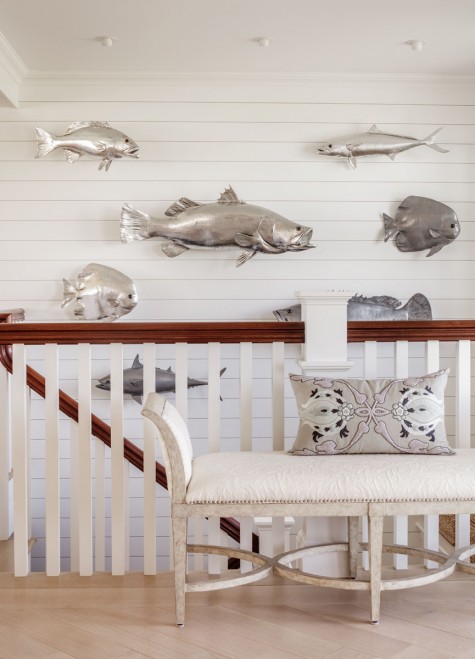 The house has many nautical touches, includ- ing sculptural fish on the wall in the stairwell that leads from the kitchen to the childrens’ rooms.