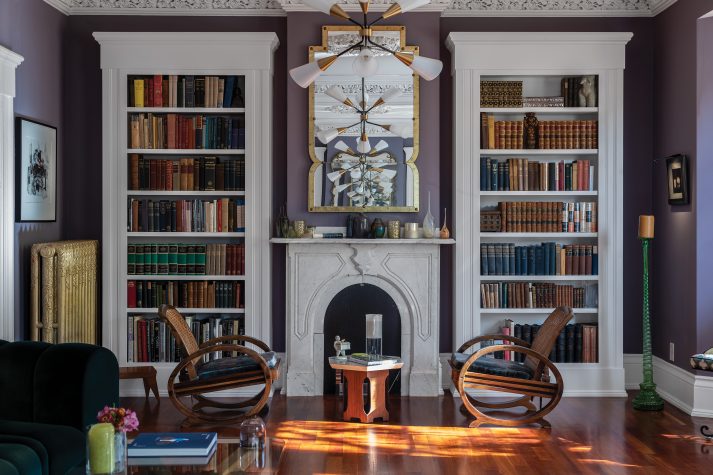 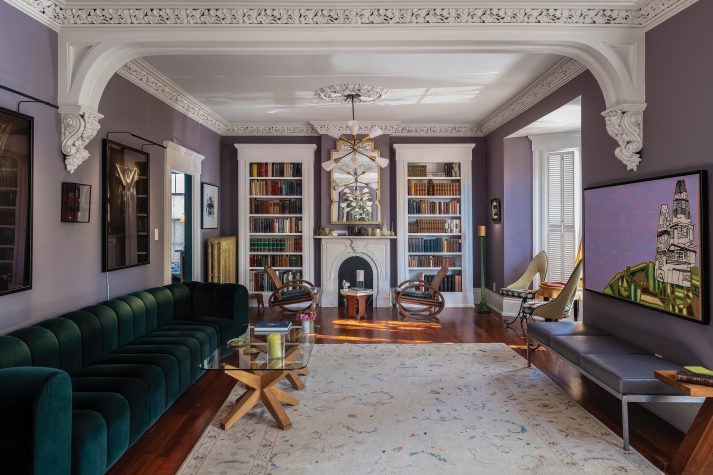 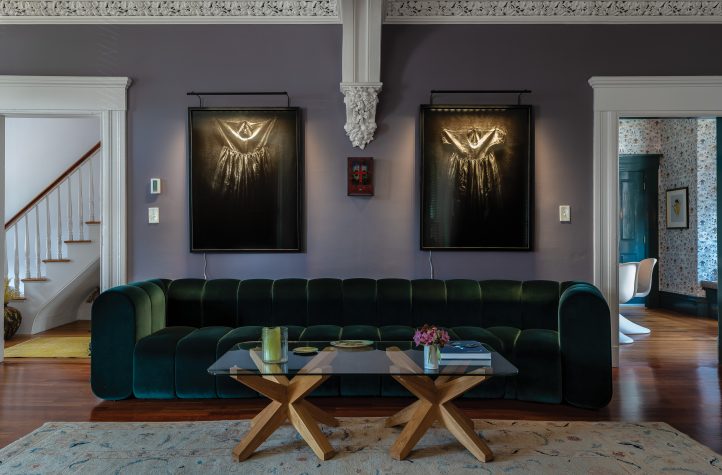 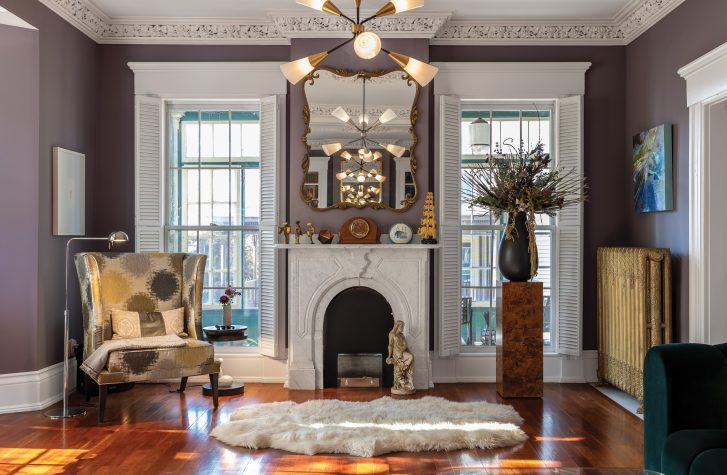 The parlor’s street end includes a wing chair by Kravet and a chandelier from West Elm. 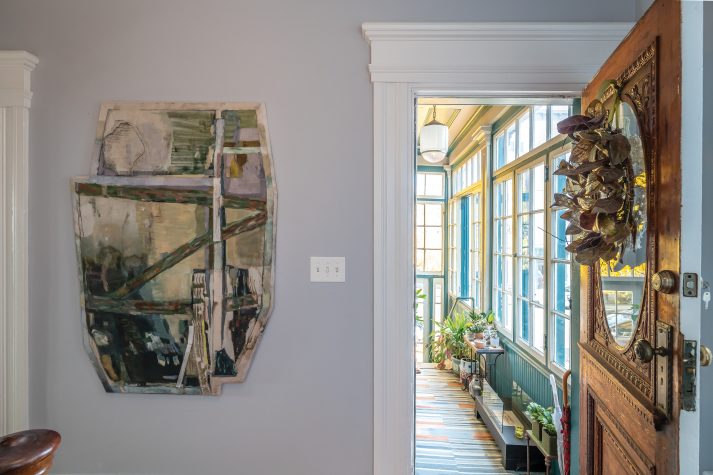 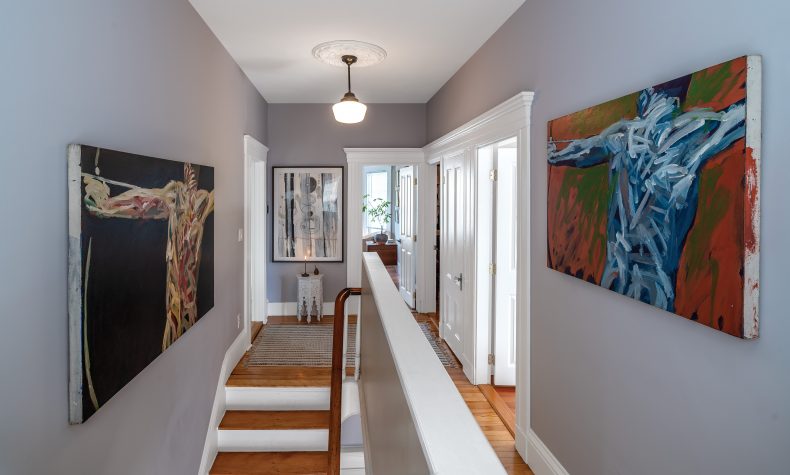 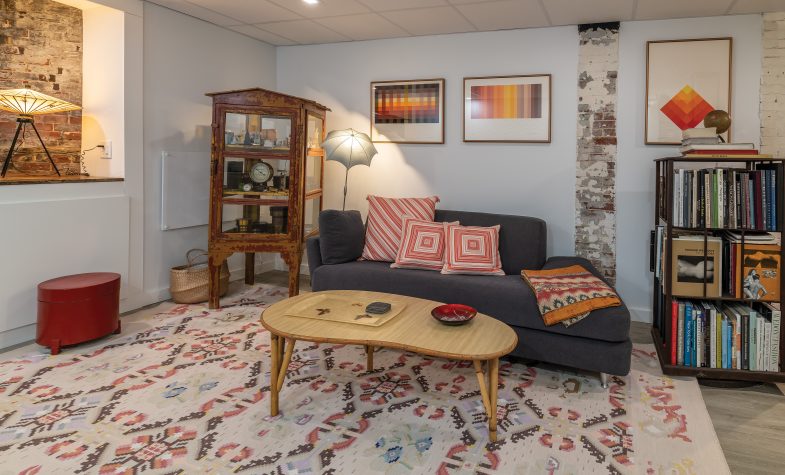 Lesko’s husband, Bob Hubert, has a basement photo studio and office where he displays geometric abstractions by Audrey Grendahl Kuhn; the coffee table is from Epoch in Belfast, Maine. 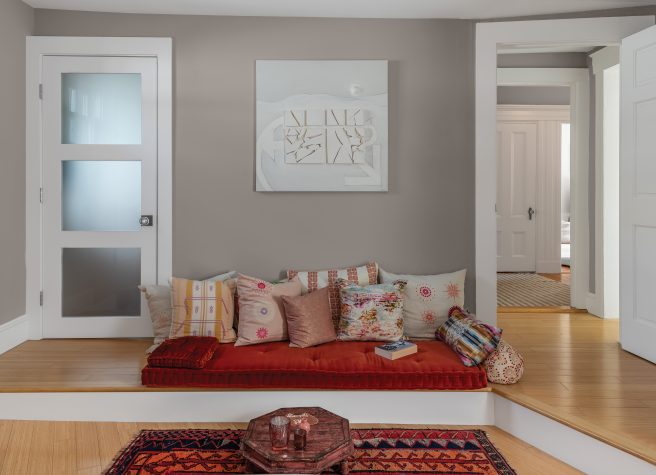 Over a makeshift daybed in the primary bedroom is a work by Andy Dean. 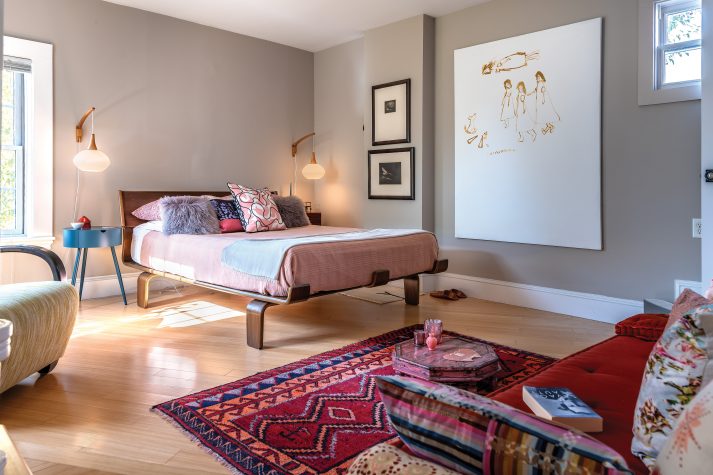 In the primary bedroom, a painting by Andy Heck Boyd from Buoy Gallery in Kittery hangs next to vintage photos, one an Edward Steichen nude; the Yugoslavian midcentury lamps on either side of the Design Within Reach bed are from Retrocraft Design in Concord, Massachusetts. 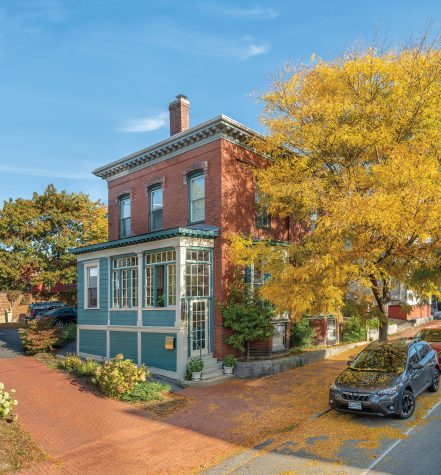 On the side of the house where the 1866 Portland fire died out, an enclosed turquoise-painted porch leads to the front door.

Some say it was a stray firecracker. Others claimed it was a carelessly discarded cigar. But whatever ignited Portland’s Great Fire on Independence Day 1866, the effects were swift and devastating. Propelled by strong winds, it charred its way from the Old Port across India Street and up Munjoy Hill, eventually leveling 1,800 buildings and leaving 10,000 people homeless. At the time, it was the largest fire ever in an American city.

Ann Freeman and her blacksmith-machinist husband Daniel, who lived at the top of Munjoy Hill, were lucky. The flames died out just as they began licking the side yard of the house the couple had built nine years before. Today, this handsome structure, which blended Greek Revival and Italianate architecture, is still called “the firestop house” by locals. Even though it was not yet ten years old at the time, in being spared the Freeman House was granted a new life.

It has lived many lives since then, including a stint as a boarding house in the 1960s, and it suffered a multitude of sins perpetrated by subsequent owners. Today, the landmark residence has been given yet another new life by designer Marianne Lesko of Enclave Interior Design and her husband, Bob Hubert, who owns an engineering and construction company called SPEC Process Engineering and Construction based in Burlington, Massachusetts.

The Freeman House could not have fallen into the hands of better stewards. “I love vintage things,” says Lesko. “That’s why we’ve always lived in old homes.” Their last residence was a circa-1838 farmhouse in Harvard, Massachusetts, where they raised their two sons, who today are 26 and 31 years old. Hubert is an avid aficionado of old things as well. He collects antique cameras, clocks, and fountain pens and also owns a working Victrola.

But if you’re expecting stuffy period interiors, you’ll be pleasantly surprised. “I love modern too,” continues Lesko. “I like to take the best of everything from all times and places. I put it all together intuitively. I like to have fun with my things. It’s not clowny, but I don’t want to get too serious.”

Lesko’s personal style sprang organically out of the fashion career she embarked upon after graduating from New York’s Fashion Institute of Technology. Her work for stores under the Limited brand retail umbrella took her to Milan, London, and Tokyo for design inspiration, then to Hong Kong, Korea, Indonesia, India, Sri Lanka, Mauritius, Israel, and Egypt for manufacturing. Lesko and Hubert also regularly spend two months a year in Paris. “Travel opened me up to so much,” she says of the way it broadened her tastes and refined and democratized her aesthetic.

She eventually transitioned out of fashion, opening a home furnishings shop in Concord, Massachusetts, in 2001. Through this venue, Lesko discovered she had an innate sense of how to mix fabrics and periods, as well as a unique flair for interesting color palettes. The couple sold the Harvard farmhouse and closed the shop in 2019 when they decided to live full time in Portland (in season they also escape to a summer cottage in Harpswell). Lesko’s design business is now headquartered in the city, though she still has clients throughout New England.

The 2,500-square-foot Freeman House itself was not in terrible condition when they purchased it in 2016. It boasted well-preserved ornate cornices, mouldings, and ceiling friezes as well a number of original marble fireplaces. A previous owner had updated most of the plumbing and wiring. Still, Lesko recalls, “It was livable, but not lovable.”

In 2018 they began redoing all the floors and bathrooms. Lesko also completely rethought the main room, probably a double parlor in its day, which was painted a muddy red. “We didn’t destroy anything that was great workmanship,” she observes. Still, she wanted this particular room to feel airy, with good circulation for the frequent social gatherings the couple like to host.

They began by ripping out chair-rail–height bookcases that were not original to the house (the shag carpet over linoleum underneath them were dead giveaways that Ann Freeman had nothing to do with them). To enhance the sense of formal symmetry, Lesko mirrored the two tall, street-facing windows by designing equally tall bookcases, executed by Biddeford-based furniture maker Gabriel Keith Sutton, that now flank the fireplace on the opposite wall. She matched the millwork to the mouldings of the windows to ensure they would give the impression of being original to the house.

These bookcases, along with all the ornate trims and ceiling friezes, were painted white, creating a neatly tailored frame for deep lilac walls. The furniture is a hodgepodge. “I’m not a snob about where I find my things,” says Lesko, who points out that light fixtures from West Elm, a Chinese console from a Connecticut secondhand shop (for which she paid just $200), and an old Steelcase bench reupholstered in lilac leather keep company with a luxurious extra-long emerald green velvet sofa from Blå Station and, in front of the fireplace, two caned Sri Lankan Deco chairs from the 1930s.

In the adjacent dining room papered in a fanciful wallcovering patterned with moths, the trim and doors are painted a supersaturated blue-green. The envelope feels elegant and stately, yet the table is surrounded by Verner Panton plastic chairs, and the light fixture is from Crate and Barrel. Custom items, such as a window banquette, mix with these more off-the-shelf finds, creating a hybrid look that both respects the historic nature of the house and broadcasts an of-the-moment chic.

Other rooms quirkily manifest Hubert’s penchant for collecting. In his sitting room upstairs and a finished basement space where he works, there are layers upon layers of objects and ephemera. The sitting room, for instance, is chockablock with cameras, clocks, paintings by Hubert’s artist grandfather (a rendition of King Lear, a portrait of Lesko, a 1960s-style cityscape), an African mask, inkwells and fountain pens, a stack of bamboo boxes, books, and more. These spaces feel like wunderkammers, those cabinets of curiosities that became popular in sixteenth-century Europe.

By contrast, Lesko’s sitting room, while not without its own generous smattering of memorabilia from her world travels, feels more open, modern, and bright. The art is contemporary, with a work by a Parisian street artist over the mantelpiece and a colorful diptych that looks like computer-game characters on another wall. The sofa has clean, steam-molded walnut lines, and there’s an acrylic waterfall-edge coffee table and a classic Kartell Componibili round storage unit made of injection-molded polycarbonate. Pale mauve walls contrast with the darker gray ones in Hubert’s adjacent sitting room.

How would this home’s newest incarnation sit with Ann Freeman, whose father deeded her this property in the mid-nineteenth century? “I believe Ann Freeman would be thrilled,” says Lesko. “I think we can assume that she was an independent woman in her time. I feel she would appreciate that as an independent woman myself I brought my own style to the house, as I believe she would have done as well.” 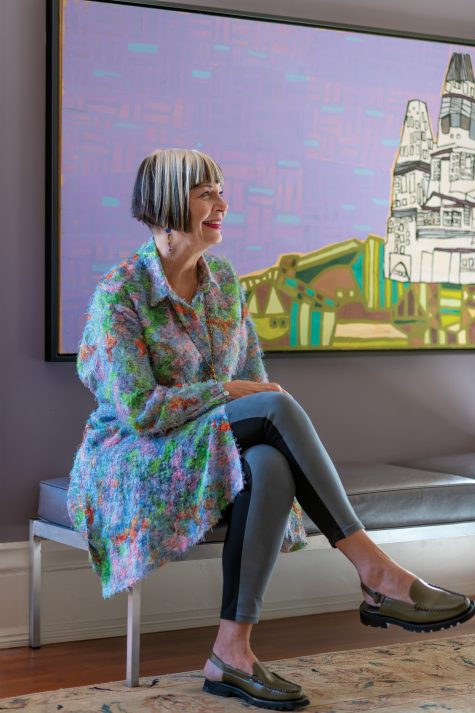 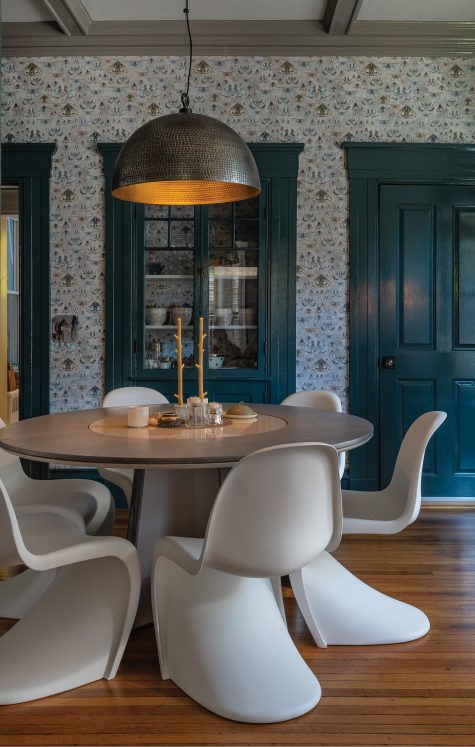 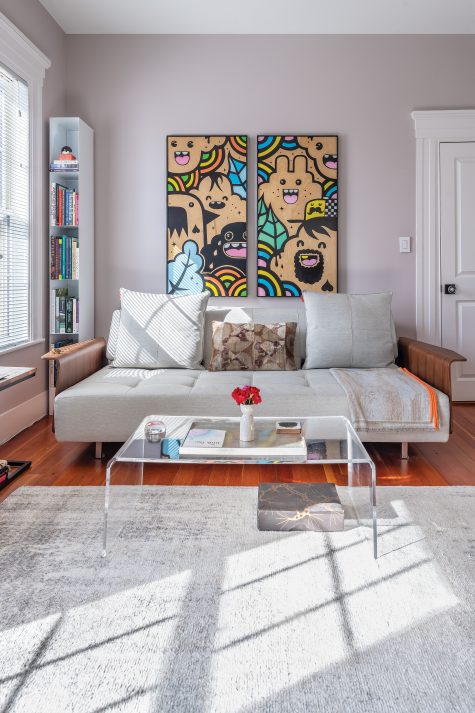 In Lesko’s office is a print from Eyeformation in Lowell, Massachusetts, hung over an Innovation Living sofa. 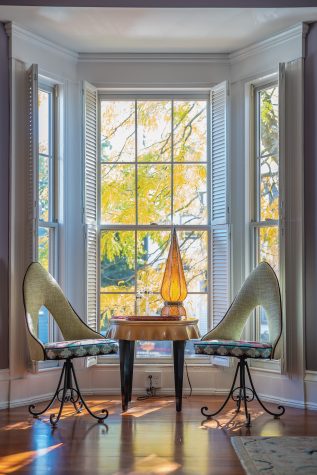 Parlor chairs from the 1960s and a “skirted” table in a bay window. 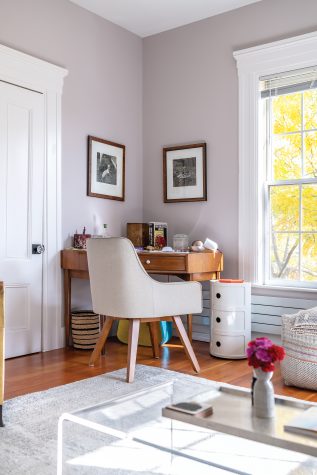 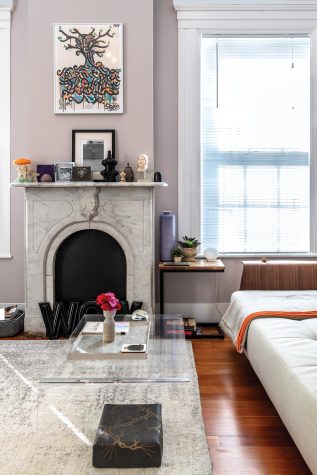 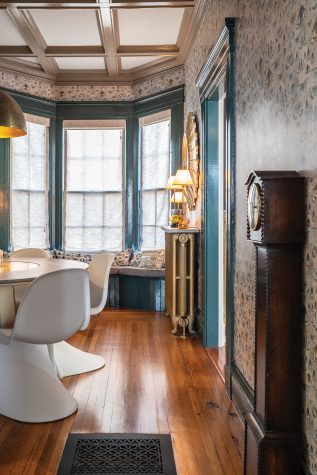 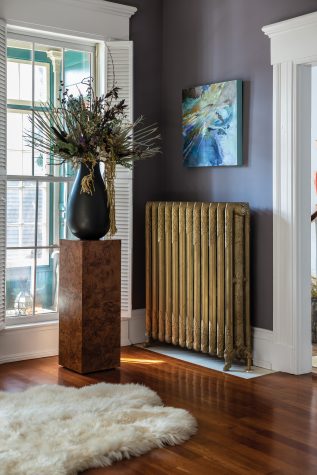 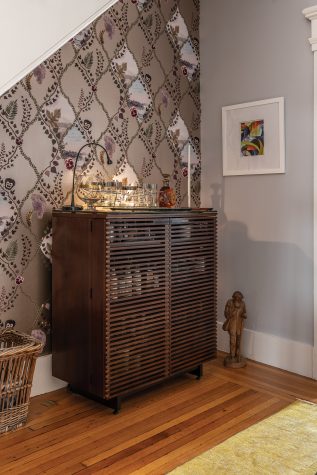 Christian Lacroix wallpaper is a backdrop for a bar cabinet and a Ryan Adams painting under the stair. 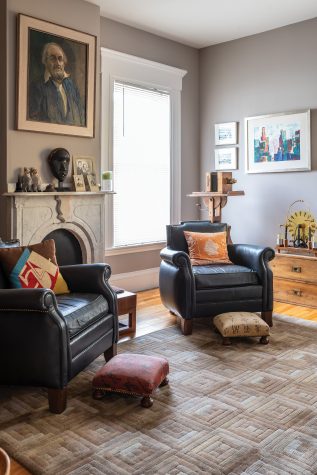 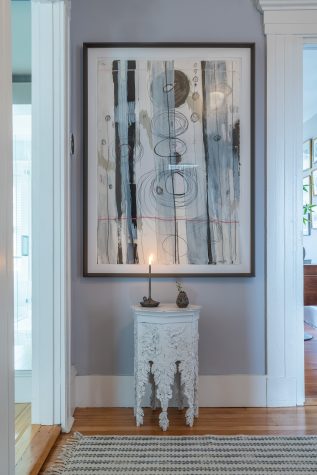 In the upper hall is a piece by a Harpswell artist above a painted Moroccan table. 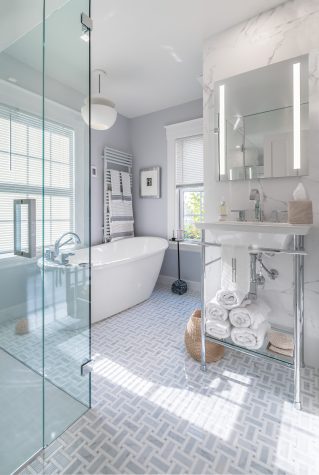 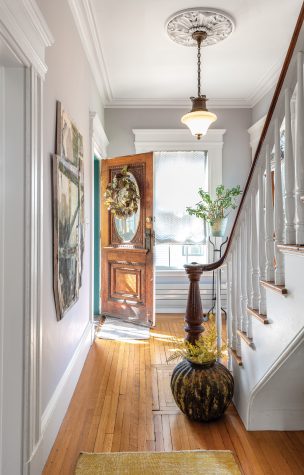 Sunlight from the street pours through the entry hall. 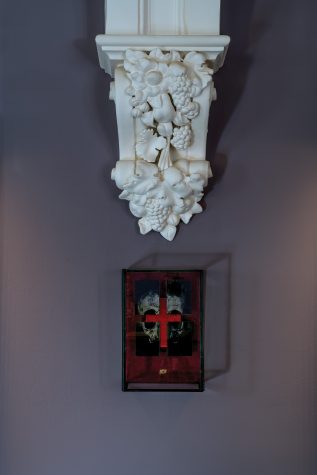 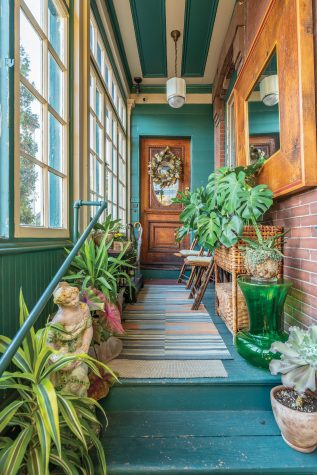 On the side of the house where the 1866 Portland fire died out, an enclosed turquoise-painted porch leads to the front door. 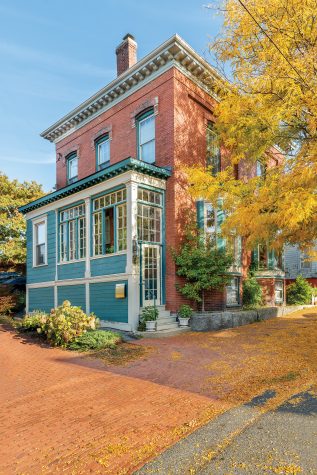