Two friends united by their common belief in the oneness of everything. 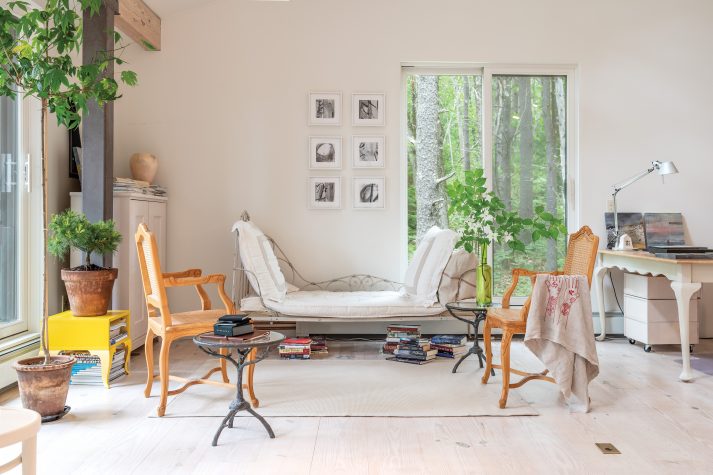 Moulton’s studio, created in collaboration with architect Carol A. Wilson, features a seating area with an iron daybed and two French caned chairs, over one of which is a piece of embroidery she’s working on about the Çatalhöyük civilization. 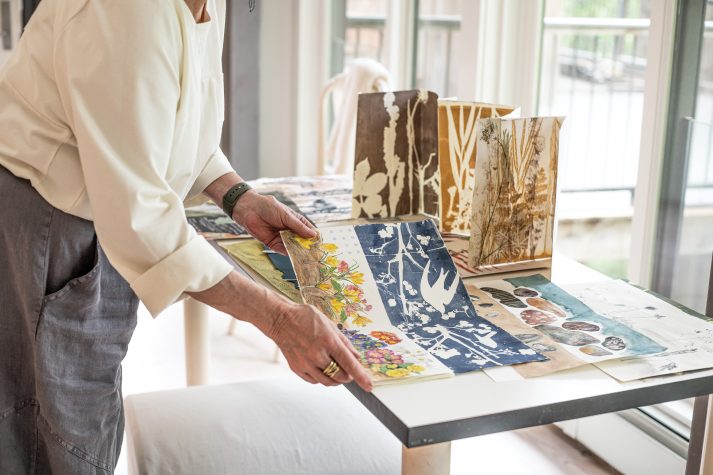 A handmade book in progress chronicles Moulton’s experience of nature. 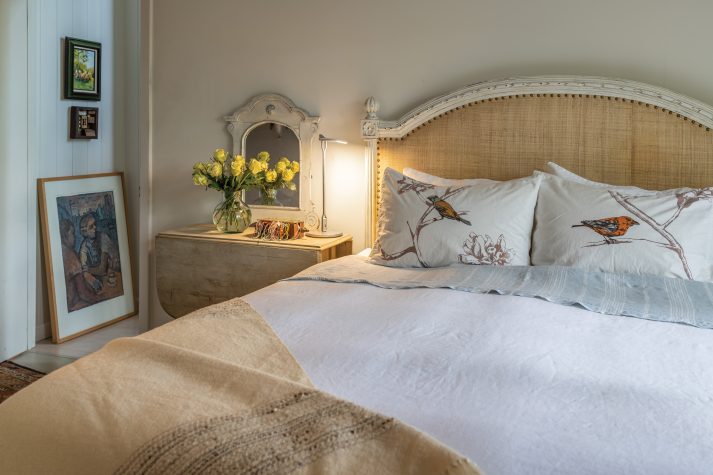 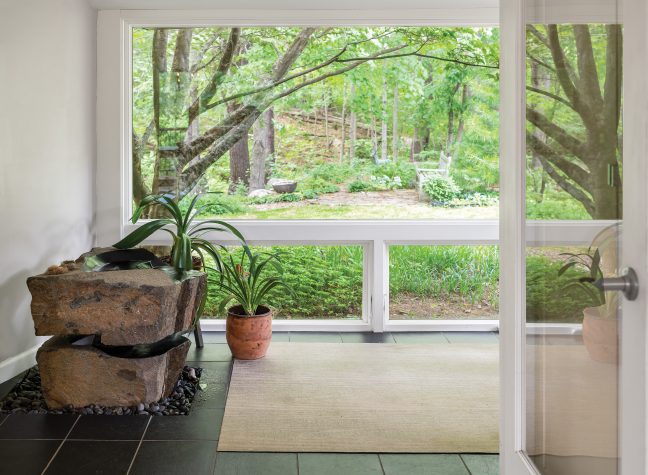 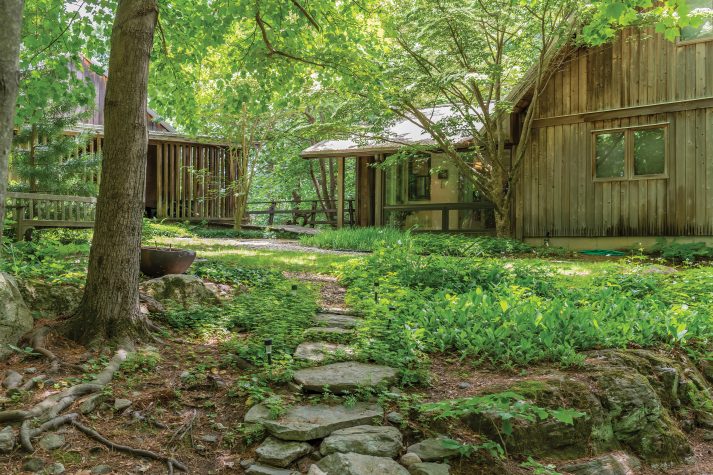 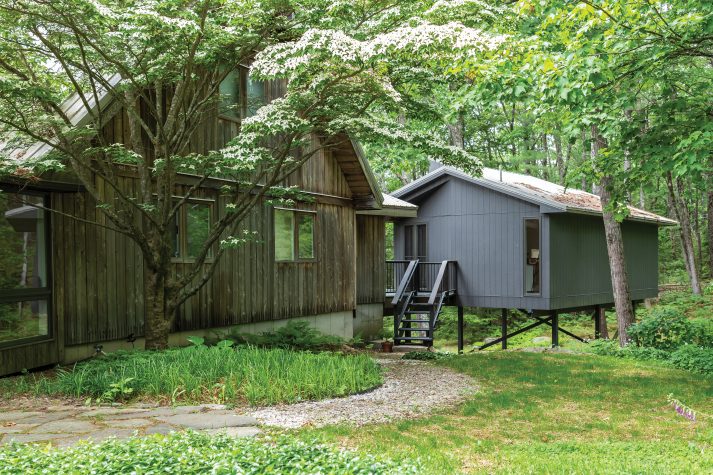 A deck connects Moulton's home to her gray angular studio on steel stilts. 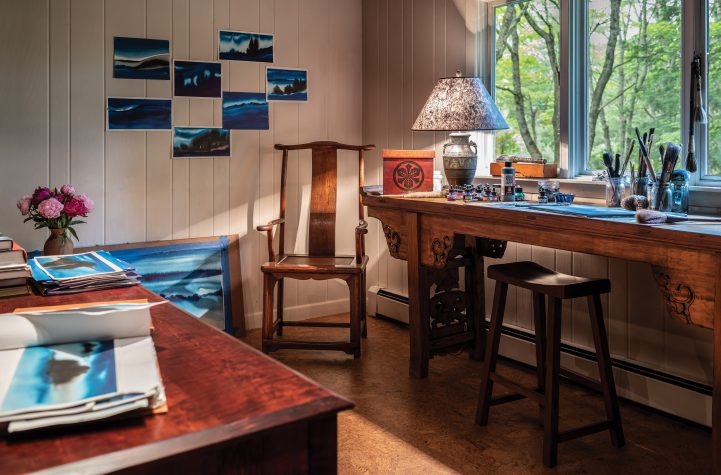 The studio where Hoagland paints her ethereal landscapes includes a Chinese calligraphy table and a maple desk by her late husband, Peter Stuart. 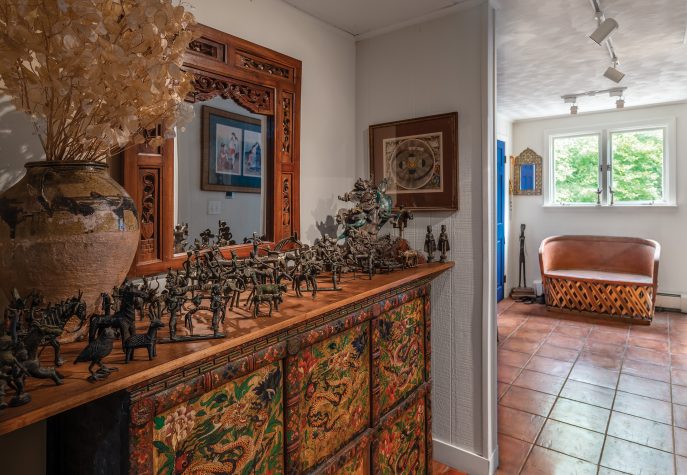 Hoagland displays her collection of cast-iron and bronze soldiers from Nepal and Tibet. 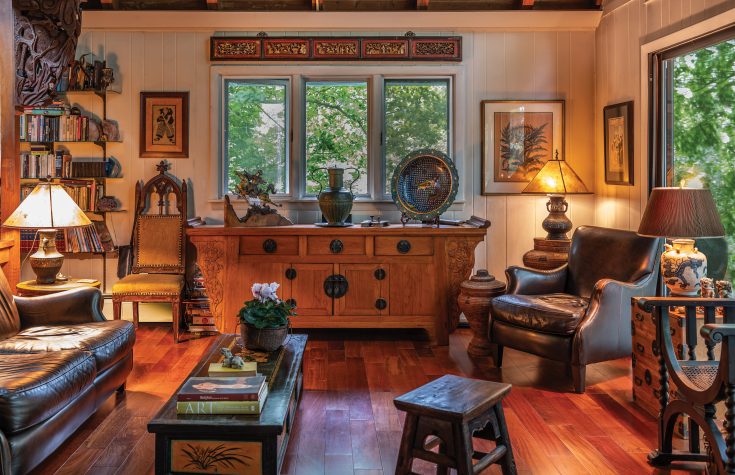 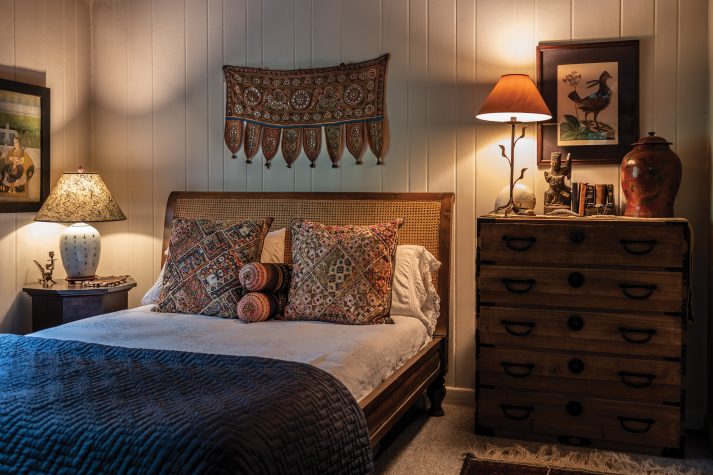 A guest room in Hoagland's home features a Middle Eastern tent hanging over an Indonesian teak bed and a nineteenth-century Japanese Kiri wood "tansu," or chest of drawers.

Years ago, I thought I’d write a book on artists’ spaces. People so focused on aesthetics, I reasoned, would surely have thoughtfully designed interiors. I discovered, however, that many artists intentionally do not design their spaces, preferring instead to keep them nondescript and utilitarian so as not to distract them from their work.

Then, through my friend Catherine Fisher (a poet and exquisitely sensitive clothes designer), I met the artists Bessie Moulton and Jan Hoagland. Part of what has kept the friendship between these two women so close for many years is their shared belief that there should be no segmentation of their life and their art. It’s all a single, unified expression. This means that their studios are extensions of their personal styles and worldview.

“Art is not a separate thing in my life,” says Bessie Moulton. “I’m always studying, thinking, looking. And I work everywhere—in bed, at the kitchen table, in the studio.”

Moulton is a kind of cultural and artistic omnivore. Conversations with her are fascinating rambles through myriad inspirations and references. She might touch upon James Joyce, Arthur Schopenhauer, Gloria Steinem, a Neolithic/Chalcolithic Anatolian civilization called the Çatalhöyüks, Venice, Japan, Tunisia, and the music of Leonard Cohen—all, breathtakingly, in the span of a mere hour.

Evidence of Moulton’s insatiable curiosity manifested when she was a child in Machias. “I was always escaping my family to my playhouse, where I could be free,” she says. She earned an undergraduate degree in psychology and art and a master’s in art education. Though she mainly pursued printmaking, the latter taught her many techniques: ceramics, calligraphy, painting, bookbinding, needlework. “I like to have all these techniques to use as I need them,” she says.

Though Moulton had stints as a youth counselor, an art instructor, and an art therapist, she earned her livelihood for 40 years as a graphic designer. Her first exhibition as an artist came in 2006. Her most consistent medium has always been artists’ books, which today grace the collections of museums and private and public libraries around the world.

Not surprisingly, the promiscuity of Moulton’s curiosity meant her studio had to have a lot of room in which to roam and explore. In the early 2000s, she contacted architect Carol A. Wilson, a longtime friend and fellow Falmouth resident, whose reductive approach to space seemed synergistic. “Minimalism is important to me,” Moulton says. “I feel it doesn’t distract from light and texture. It had to be a backdrop for other things.”

“It was Carol who decided to put the space on steel stilts over the pond,” recalls the artist. The resulting rectangular structure, with large glass sliders and clerestory windows, lifted the studio high enough to take advantage of the southeastern light and views of the Presumpscot River and the trail running alongside it. Moulton reaches it by passing through her bedroom’s walk-in closet and traversing a short distance of deck. It’s like a dream passage into a universe of perpetual discovery.

Moulton painted the studio’s interior a creamy white and bleached the wide-plank pine floors, beams, and workstations to make everything as light as possible. “I need a clean space,” she says. “I wanted lots of glass because the setting is amazing. There’s a beautiful vista from every window. It feels like I’m in nature.”

Nearly half of it is open floor space, with books hugging one wall. “Books are basically my studies,” Moulton says of the selection arrayed on IKEA shelves. Not surprisingly, they encompass a vast assortment of subjects: mythology, women who explored other cultures, color, travel, herbal medicines, Jungian psychology, insects, literature, artists.

A wash station sits in one corner. In another is an old dining table with Queen Anne–style legs, repurposed as a desk. Between them are rolling worktables of Moulton’s own design. Another table sits by glass sliders overlooking the woods and Zen gardens. Opposite the door to the studio is a seating area composed of an iron daybed purchased at Blanche and Mimi in Portland, two French Provincial–style chairs with caned backs, and a pair of Giacometti-like glass-topped bronze tables.

All around are paintings, handmade books, calligraphic works of asemic writing (text that has no meaning but prizes the simple beauty of line), collages, a basket of ceramic Çatalhöyük-style seals she made, and other artwork. All of these, says Moulton, represent different aspects of her quest to understand how everything in the world connects.

“I’m searching for the essence,” she says. “We get so engaged in being ‘out there.’ At this stage of my life, I feel I have to go inward to know myself, to discover people and cultures and ideas that are universal, with no boundaries of time. It’s the essence of me, of art, of all things.”

Jan Hoagland grew up in the New England countryside, in a house filled with art and antiques, including Japanese and Chinese artwork and furnishings. “With Chinese paintings, I was very intrigued by the way these artists depicted the mountains and the mists rising,” she recalls. “They didn’t feel the need to have any people in them, and if they did, they were very small.” This highlights another concern common to both women: the belief that our human concerns are a minuscule aspect of the world of spirit and nature.

Hoagland majored in English literature in college (like Moulton, she is a voracious reader) but found herself powerfully drawn to courses about Chinese and Tibetan art and history. She dabbled a bit in Chinese-style brush painting in her 20s and 30s, but not in a consistent way.

Then, in 1994, she fell in love with Peter Stuart, an interior designer and furniture maker who worked with figured hardwoods like flamed birch, tiger maple, and burl. The couple established Lovell Hall Art and Design on Fore Street in Portland (now solely online at lovellhallartdesign.com), where they sold Stuart’s work, some European antiques, and Asian furniture and objects. Buying trips took them to China, Japan, Indonesia, and India as well as throughout Europe and the United States.

“When I saw my first pieces of Chinese furniture,” remembers Hoagland, “I felt I knew them. They really spoke to me. It was the same with the first Japanese woodblock prints by Hiroshige that I saw as a child.”

In the late 1990s Jan returned to painting. Inspired by “scholar’s landscape marbles”— slabs whose geological figuration resembles mountains and mists and which once served as objects of philosophical and mystical contemplation—she says, “I felt I could capture that in a way.” Stuart, who died unexpectedly in 2018, had encouraged her to pursue art after she painted a landscape for him as a gift.

When Hoagland’s son left home, she decided to convert his bedroom into a studio. It’s a modest-sized space in a house packed to the gills with Chinese and Tibetan furniture, Japanese woodblock prints, Mongolian textiles, buddhas of various kinds, a collection of Nepalese and Tibetan iron soldiers, and many other intriguing artifacts.

Under a window overlooking her pool and gardens is a long, narrow, late-nineteenth-century Chinese calligraphy table designed for painting scrolls. “I can’t imagine I would have gone out and bought a long thin table,” Hoagland says. “I really love working at this table, the aesthetic of it.” Atop it sit bottles of blue and black ink, a collection of brushes and Chinese porcelain brush stands, a Japanese travel box where she stores more inks, and a Chinese cloisonné lamp.

In one corner is a Ming Dynasty–style cabinet also crafted in the 1800s, and this is where Hoagland stores paper and supplies. A tiger maple table Stuart made stands opposite the window, where Hoagland often pulls up a Chinese yoke-back chair (part of a nineteenth-century pair) to review her work. Behind this, she hung a door made of bamboo, Kiri wood, and reeds that would have adorned a summerhouse in Japan.

Her paintings, she says, are “imaginations of a landscape, but they’re also interior landscapes. They’re coming from a place of being, where something in this life has been influenced by something more cosmic. With each landscape, there’s a powerful intrinsic feeling I get that I’ve done this before.”

Hoagland reiterates the holistic perspective of existence that both women share, saying, “Nothing was ever planned. It was and is an evolution of a business, an art, and a person all sort of wrapped up together.” 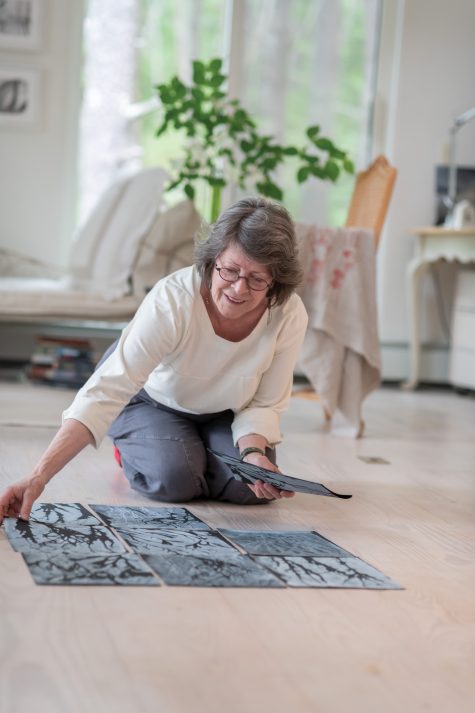 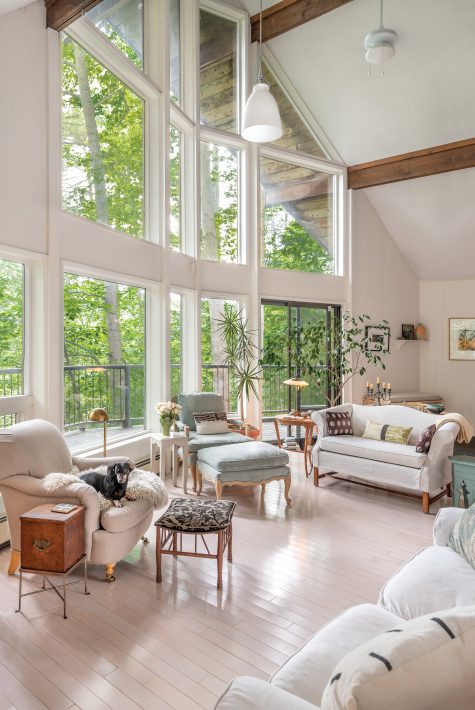 In Moulton’s living room, pickled floors and plate glass provide the backdrop for an aqua French-style armchair and ottoman, a camelback settee, an African stool, and an antique microscope case on metal legs; artworks include pieces by Meg Brown Payson and Sharon Townsend. 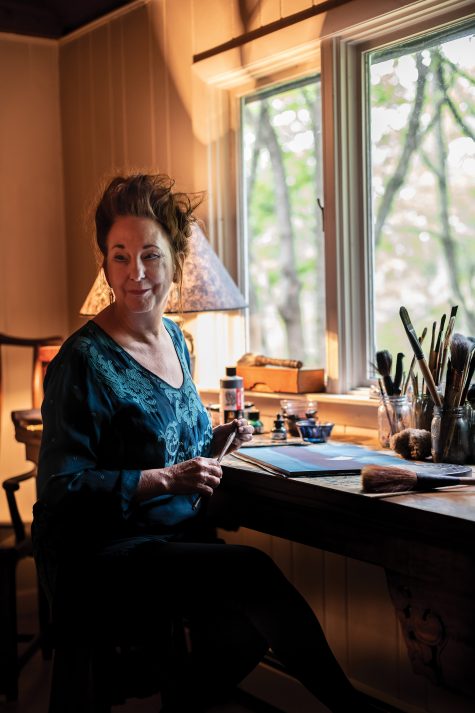 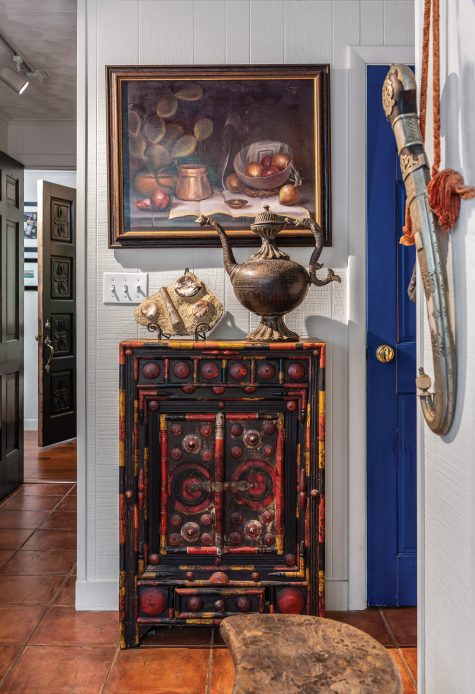 In an entry hall of Hoagland's home is a painted 1920s chest from the Punjab, a bronze Pakistani ewer, and a Moroccan scimitar. 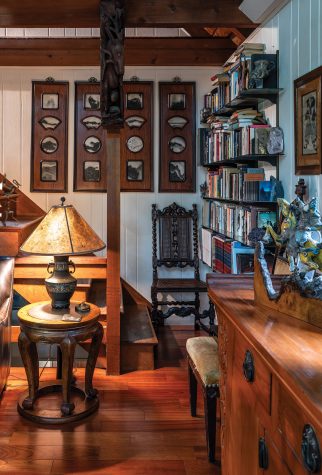 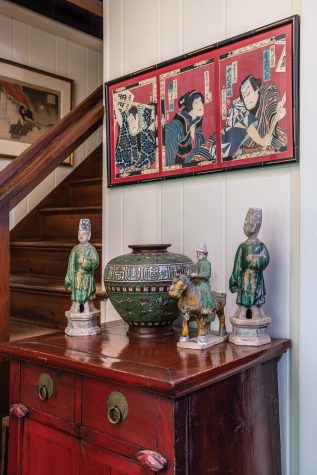 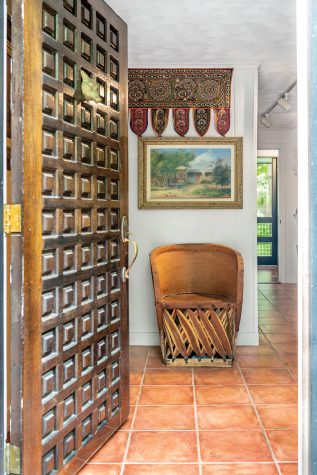 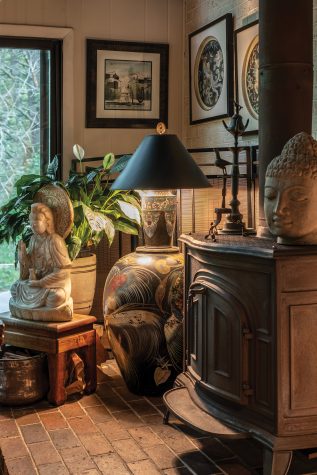 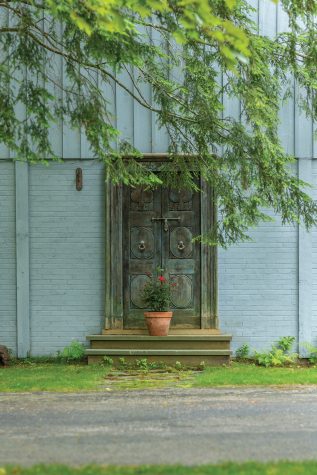 A door from Rajasthan in northern India. 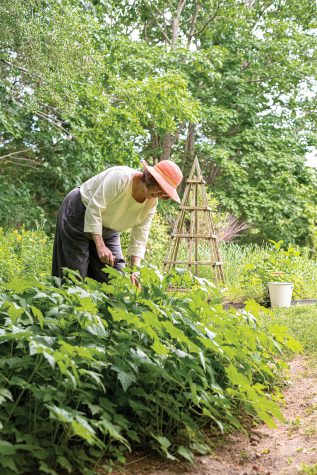 Moulton in her garden. 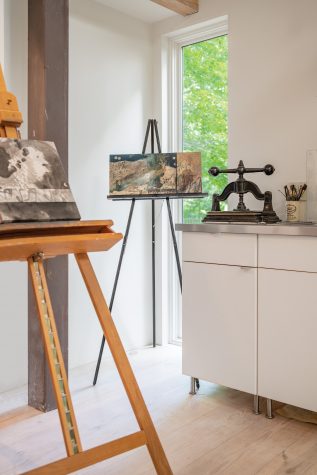 An antique book press sits next to two Moulton works.