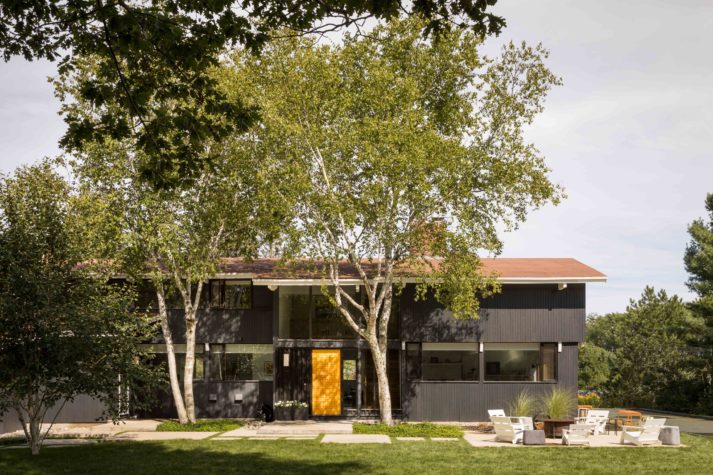 Originally yellow, the exterior’s vertical cedar cladding has been painted charcoal (Benjamin Moore’s Black Panther) with white for the roof overhang. Patrick Carroll of Carroll Associates is responsible for the landscaping. 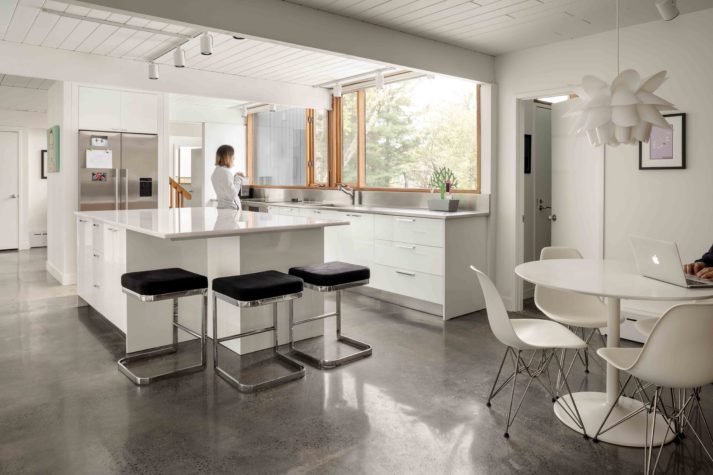 The kitchen remodel involved using white paint for the exposed tongue-and-grove ceiling with Douglas fir beams. IKEA drawers have been fitted under the white quartzite-topped island and beneath the molded stainless-steel countertop, sink, and backsplash. There is a stainless-steel kick plate under the counter as well. New mahogany-framed windows are from Acorn Deck House in Acton. The homeowners wanted a ’70s feel to the room, so they sourced a kitchen table and black stools from CB2 and Eames molded chairs from Design Within Reach. 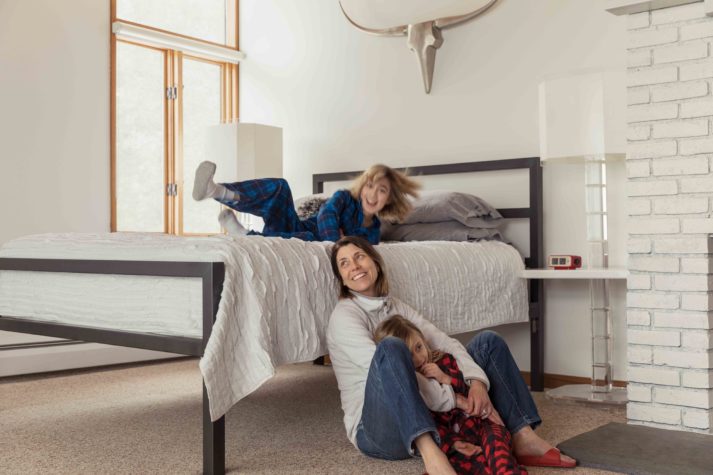 One of the homeowners with her children in the owners’ bedroom, which has wall-to-wall carpeting, a fireplace and hearth recently painted white, and a bed frame from Room and Board. 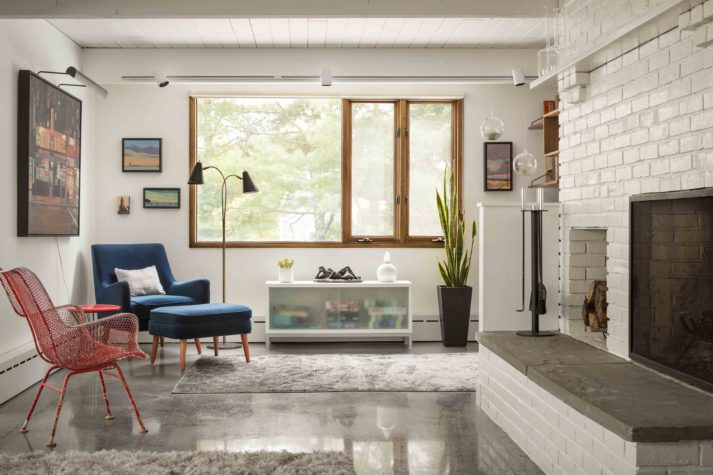 A sitting area in the living room with a blue chair from Room and Board, a rug from Home Depot, and a console table from Design Within Reach. The lamp and red wire chair are vintage finds. All the paintings are by Sonya Sklaroff. 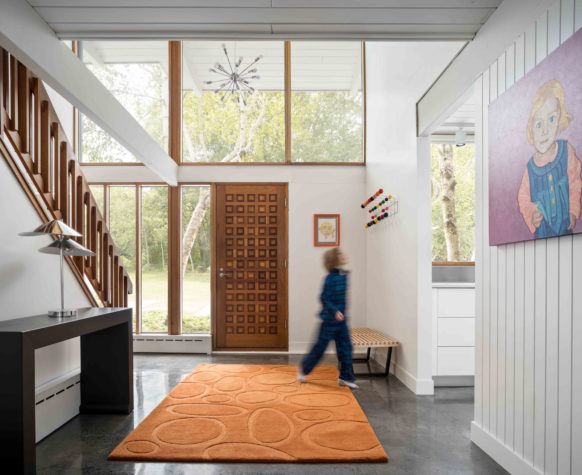 The entrance was reconfigured after a closet, doors to the kitchen (at right), and powder room were removed. Now the space showcases the original stair rail and mahogany front door, as well as a new Angela Adams rug and an Eames colorful hang-it-all from Design Within Reach. The original flooring on the ground floor (including laminate and carpet) was removed to reveal the concrete slab on which the home was built. 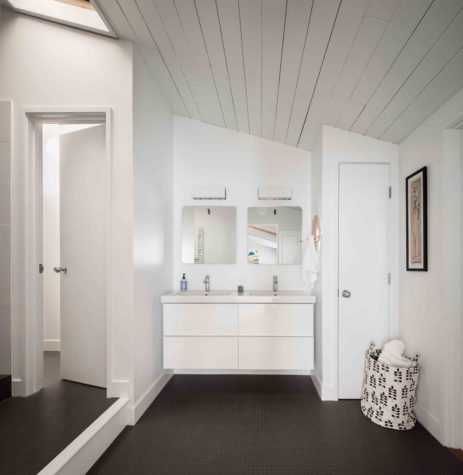 The new owners’ bathroom has an IKEA vanity, a Blu Dot mirror, and Lumens sconces. 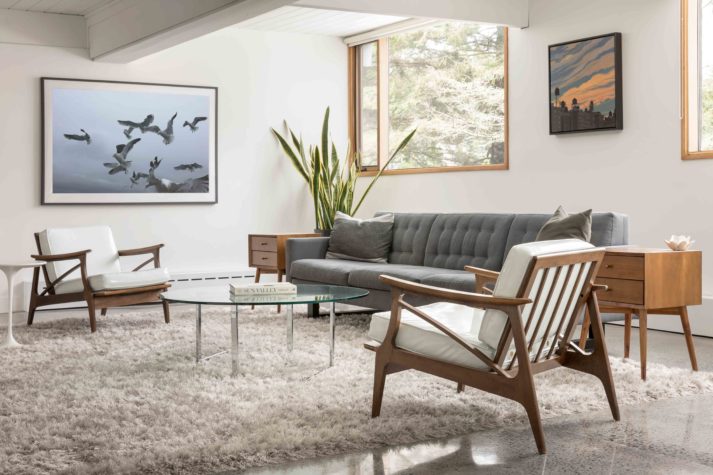 The living room features a glass coffee table from eBay, a couch from Room and Board, an end table from West Elm, and a rug from Port City Flooring. The chairs were from the basement of one of the homeowners’ mothers. Pistol Pete’s Upholstery Shop finished them in white vinyl. The photograph of seagulls flocking to the Lucky Catch lobster boat in Portland is a collaborative effort by the homeowners. The painting is by Sonya Sklaroff.

A renovation of a modernist prefab

I had never heard of a Deck House until recently; then, all of a sudden, Deck Houses seemed to be popping up everywhere in my life. The first time, I was visiting a Portland architect at her Westbrook home, a post and beam with a wide, glassy gable end that faces the street. She wasn’t sure, but she suspected she’d purchased a Deck House. She explained to me that such houses were essentially midcentury modern prefabs sold by a Massachusetts-based company. Later, in preparing to visit a 1979 Cape Elizabeth home for this article, I called the owner, and she said she had an Acorn house. “How fun!” I thought, for I had learned about Acorn Structures, Inc., while educating myself about Deck Houses. Acorn Structures was founded by Carl Koch, an innovator in prefab housing. Architects William Berkes and Robert Brownell, who were with Koch at Techbuilt, an earlier company of his, and who were significantly inspired by Walter Gropius’s modernist ideas, left to form Deck House in 1959. Decades later, Acorn and Deck merged. Initially the company failed (perhaps due to a rebranding problem), but then it reformed with a new owner in 2009 to become the now flourishing Acorn Deck House Company in Acton, Massachusetts.

As the Cape Elizabeth homeowner told me more about the home, I thought, “It doesn’t sound like she has an Acorn. Sounds more like a Deck House.” She mentioned her house’s oversized mahogany-framed windows, exposed ceiling beams, tongue-and groove ceilings, and waffle door. An Acorn would be open plan with big windows, but also have a more conventionally pitched roof and more drywall. I called Acorn Deck House Company, and they were able to look up the Cape Elizabeth address and confirm my hunch. But even without confirmation from their database, the voice on the line knew. The waffle door, she said, made the Cape Elizabeth house most certainly a Deck House.

After my phone-sleuthing adventure, I went to visit. Unrenovated, a Deck House would likely seem dated to contemporary sensibilities. Even so, when the current homeowners walked in, they were excited. They had always loved midcentury modern design and had an immediate vision for what the space could be.

Architect David Morris of Caleb Johnson Studio, who led the renovation design, chose not to “reinvent the house,” but rather update it and improve circulation with a more inviting entry and a larger, more functional kitchen that was not segregated from the rest of the house. To do this, builder Peter Floeckher (now of Woodhull of Maine) opened up the ground floor by removing walls, a front entry closet, an existing row of kitchen cabinets, and a centrally placed powder room. “Often a renovation is more about subtraction than addition,” says Caleb Johnson.

Post-renovation, visitors walk into an open foyer with a large sewing room on the right, a living room with two separate sitting areas straight ahead, and a large kitchen and adjacent dining area through door frames (but not actual doors). All the rooms are at least partially visible from the entry, save for a family room and a powder/laundry room on the far side of the kitchen. Much of the original woodwork was left intact, including a handsome mahogany front staircase, a built-in pantry/office unit by the breakfast table, and built-in bookcases in the family room. Morris designed and Floeckher fashioned a built-in dining room bar that mimics the kitchen unit. Meanwhile, the reorganized kitchen got a white quartzite island and a countertop with an integrated sink and backsplash welded to look like one piece of stainless steel. As large mahogany-framed windows run behind the counter, and the other walls are open to their neighboring spaces, kitchen storage is primarily in large, shiny white IKEA drawers under the counter and island top. Pulls from Portland’s Handle It! dress up the look. Mahogany trim that was removed from the house was repurposed as a panel of wood strips for one end of the kitchen island.

A powder/laundry room and upstairs owners’ bath were also reconfigured as part of the renovation. Now the powder/laundry room has a clean but groovy ’70s vibe, with a swirling red graphic on white wallpaper, a gray Marmoleum floor, and a fresh white vanity. (Red appears throughout the house. The laundry’s pendant light is red, as are the eight dining room chairs and a wire living room chair.) A quirk of the home is that the first-floor ceiling is the upstairs floor, so there is no place to hide plumbing pipes. As a result, the original owners’ bath was on two levels, with one level consisting of a platform to conceal pipes. This is still the case, but a new layout simplified the configuration of the owners’ bath, bedroom, and linen closet, while updating the space with a custom glass shower lined with large-format white shower tiles and with black porcelain tile on the floor.

Often enough, a love of midcentury modern design does not coexist with a love of certain once-popular materials, like wall-to-wall carpeting, wood paneling, and laminate flooring, or with a fondness for the darkness that can result from the heavy use of wood, even in a house with big windows. To counteract the darkness, the homeowners painted the first-floor walls, ceilings, exposed beams, and brick fireplaces white, as well as the upstairs walls and closet fronts. (The second-floor ceiling and trim were left natural.) Meanwhile, the materials covering the first floor were removed, exposing the concrete slab on which the house was built. The slab was ground down, treated with a 50 percent black stain, and polished by Jon Meade Design, the company responsible for the concrete floor in Portland’s Whole Foods.

It hardly seems surprising that the homeowners were drawn to the pleasures of a Deck House, given their own considerable design talents and love of midcentury modern furniture, all of which is everywhere apparent in the house. The homeowners both attended art school and were in advertising. (He still is; she is currently raising their two children and running a small business out of her sewing room.) Their furnishings combine purchases from companies known to feature Scandinavian or midcentury modern design (like Design Within Reach, IKEA, and Joybird) and some local shops (like Portland’s Blanche and Mimi and Angela Adams) with family heirlooms (sometimes tweaked, like the chairs reupholstered in white vinyl) and vintage finds. The framed art includes prints that the husband made of the exteriors of multiple New York museums and of paintings by Sonya Sklaroff, an artist the husband started collecting when he lived in New York City. The couple collaborated on the living room’s giant picture of seagulls diving rapaciously toward the catch of a Portland lobster boat: she snapped the image with an iPhone, and he blew it up with a special filter that alters the background and avoids pixilation.

Part of the pleasure of the project, says Johnson, was that the homeowners thought about design as he and Morris do. “It’s good to have clients whose tastes align with ours. Then it’s an easy project to get a great result.” I like to imagine that the original Deck House creators, whose basic design is so celebrated in all the homeowners’ renovation and furniture choices, would have thought so, too. 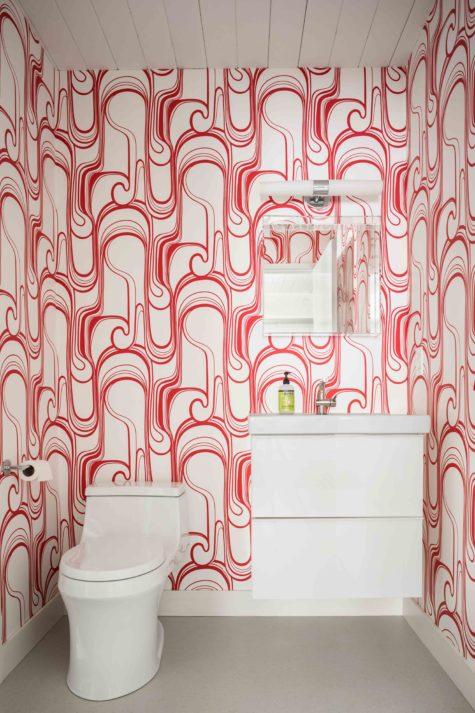 Wanting a powder room with a ’70s groove, the homeowners chose the wavy white and red wallpaper (which references red accents throughout the house), an IKEA vanity and faucet, Lumens sconces, a Kartell mirror, and a gray Marmoleum floor. 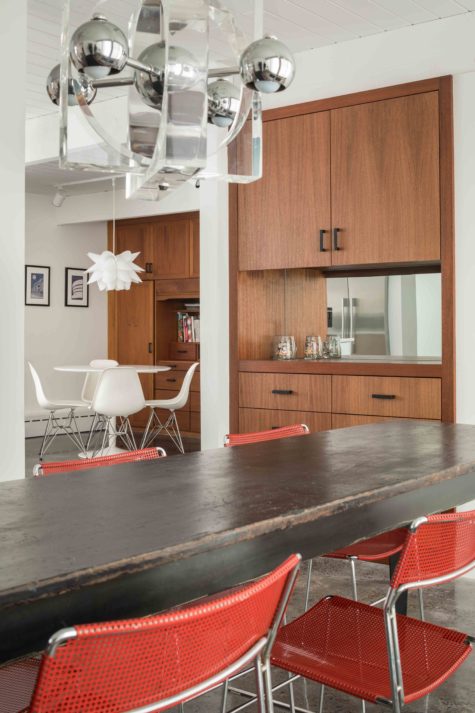 A view from the dining room into the kitchen. The mahogany custom cabinetry that functions as a bar in the foreground was built to mimic the original cabinetry that serves as a pantry in the background. The legs of the farmhouse table (which the homeowners inherited from a parent) were wobbly, so Nathan Deyesso of DSO Creative Fabrication fashioned a metal base. The red chairs are a thrift store find. The Lucite and metal light fixture came from New Jersey.