Nesting on the Neck 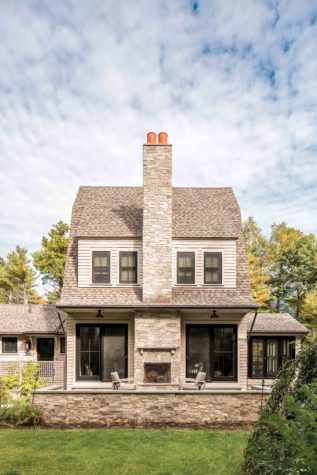 This high-minded beach house is located on Prouts Neck. It earned its nickname “The Birdhouse” with its high gambrels and quirky shape. The home was designed by Union Studio Architecture and Community Design in Providence, and built by R.P. Morrison Builders of Windham. 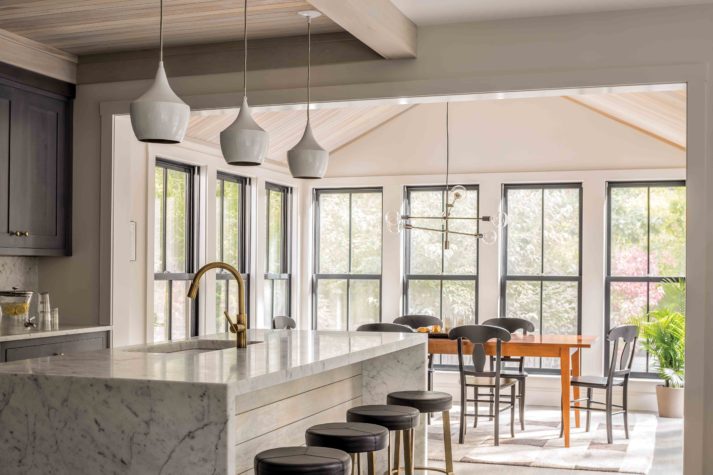 In contrast to the exterior, the inside of the Birdhouse is an exercise in contemporary colors and sophisticated restraint. The kitchen features a waterfall marble island and marble backsplash, a pickled pine ceiling, stools from CB2, and lighting from Circa Lighting. 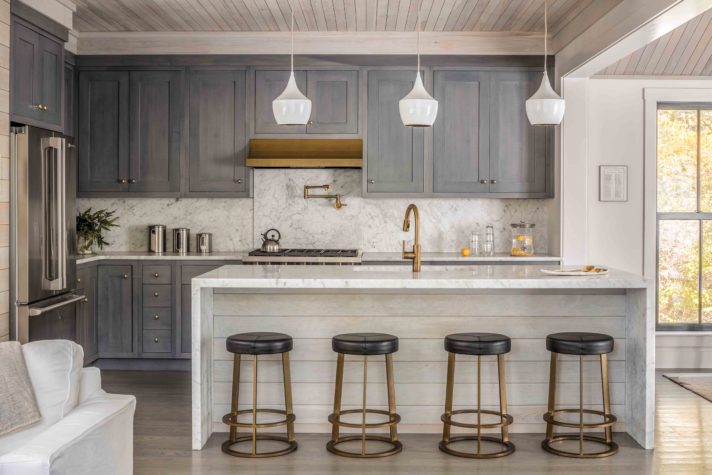 Brass, black, and gray are the dominating colors in this elegant kitchen. The cabinets are custom made from maple and feature a dark gray stain. The plumbing fixtures are from Newport Brass. 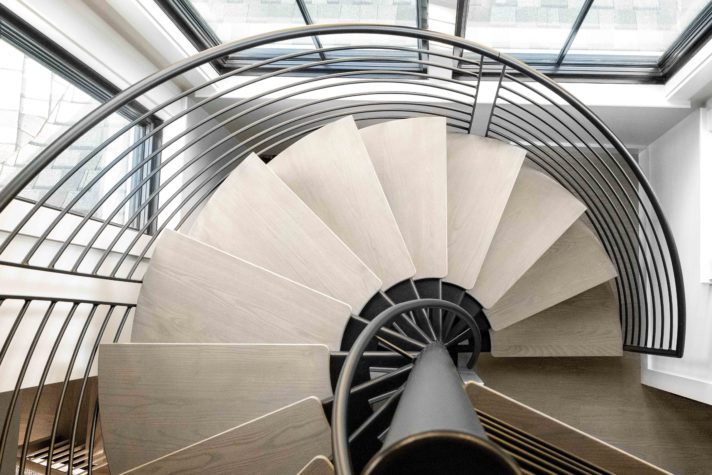 Shot from above, the staircase reveals its elegant form. In order to gain more space in the home, the architect opted to build up rather than out. The original beach home was small and had little room for guests. Now, the homeowners have three stories’ worth of space, plus a furnished basement/ bunk room. 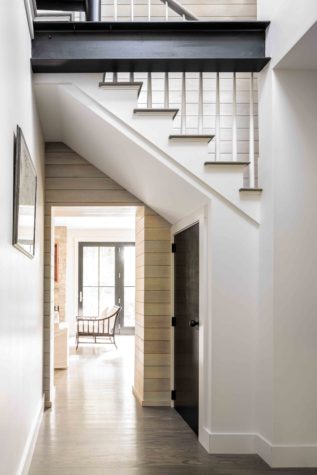 “The architect liked seeing something a bit more raw and industrial,” explains Jenny Morrison of the black steel structural beam that looms above the first-floor hallway, which features ash wood flooring treated with a country gray stain. 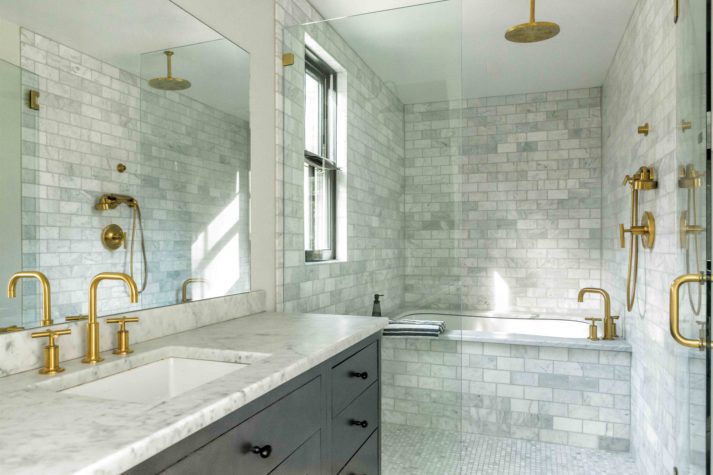 The owners’ suite bathroom features Carrara marble, tile by Capozza Tile and Floor Covering Center, lights from Circa Lighting, and fixtures from Koehler. 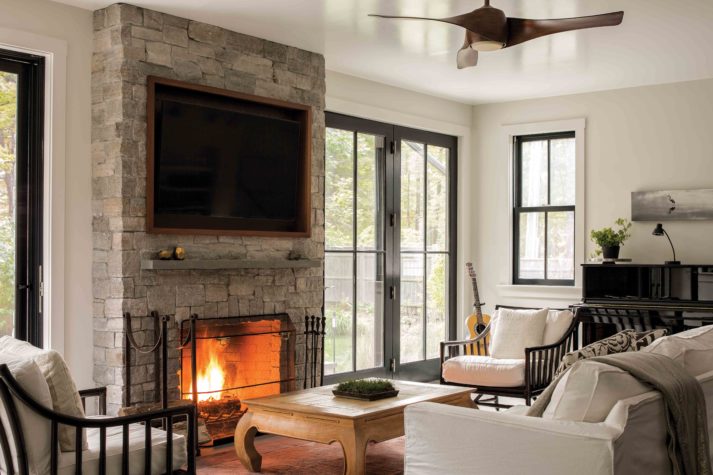 The dual-sided fireplace is made from Boston-blend granite. The ceiling in the living room has been painted bright white to reflect light. 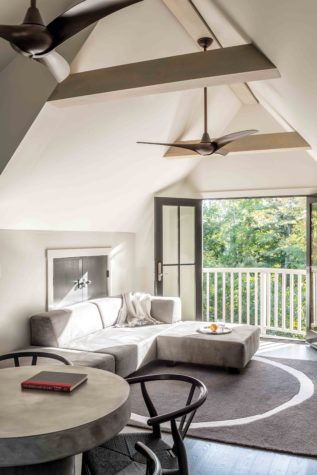 The third floor of the house is used as an office space and lounge area. It opens out to a Juliette balcony that overlooks the water. 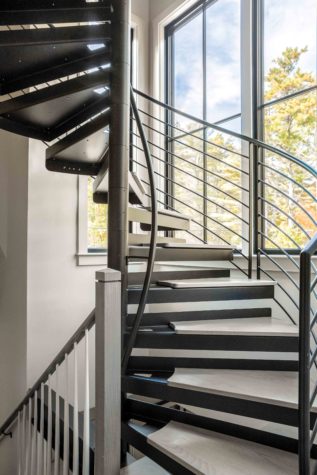 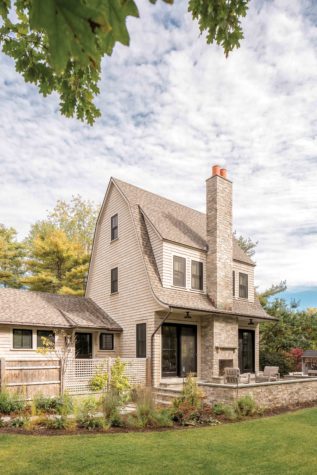 The black windows and doors are a bold style decision that contrasts nicely with the cedar shingle siding. Windows are by Marvin Ultimate.

An anonymous contractor gave the house its name. He was working on a different project on Prouts Neck when he noticed the steep roofline and unconventional angles—how the gambrels point toward the sky as though they want to climb higher—and he noticed the intricate detailing on the black gutters and creamy wood siding. He began calling the diminutive home “The Birdhouse.” The term spread, as aptly given nicknames are wont to do, and soon the team working on the Birdhouse, headed by Jenny and Josh Morrison of R.P. Morrison Builders, began to use the name. Eventually, even the homeowners got on board. “We do use it like a birdhouse,” says homeowner Colleen Alford, who spends many happy hours sitting in her third-floor study, looking out over the water and waiting for her teenage daughters to return home for dinner. “In Providence, where we live, I have to drive them everywhere. But here, they can be free. They can take their bikes out and do their own thing, and then fly back home,” she says.

Designed by Donald Powers and Christina Carlson of Union Studio Architecture and Community Design in Providence, Rhode Island, and built by R.P. Morrison Builders of Windham, the house on Prouts Neck was completed in a single off-season (an unofficial designation that runs from October to June). Although it’s technically a renovation, it feels odd to call it that, since the structure was so dramatically transformed. “From the very beginning of the job, I knew I would have to bring in more people than we would usually have on a site,” Josh Morrison remembers. “We were overloading the house from the moment we got the go-ahead.” It’s challenging to build on Prouts Neck; the roads in and out of the neighborhood are narrow, and there is a construction moratorium starting on June 1. But the biggest challenge, Josh explains, was that “we couldn’t just tear it down and start fresh.” “They wanted a bigger house, but because of setbacks, we couldn’t expand the footprint.”

Powers and Carlson designed a new layout that would gain vertical space without encroaching on the protected coastline. The house’s elaborate stone work was designed for exterior living and continues to be one of the house’s major features.

What was once a modest, single-story summer cottage with two bedrooms and one bathroom is now a contemporary beach home with a spacious owners’ suite, bedrooms for two daughters, and sleeping space for visiting friends in the finished basement. “Finishing the basement added on a good deal more of livable space,” says Carlson. “The site had strict constraints, and we think the finished product is a great merging of the old and the new.” On the first floor, Powers and Carlson designed an open-concept kitchen, dining room, and living room, which flow naturally outward toward the landscaped garden and wooden deck. The girls’ bedrooms are also located on the first floor, while the second floor is dominated by the owners’ suite. The third floor features a living room on one side and Alford’s studio on the other. Alford is a jewelry designer, and although she says she doesn’t do the “production aspect” of her work while on vacation, she’s always gathering inspiration from the world around her. “I have space for my jewelry desk, and there, I can look out toward the ocean,” she says. “It feels like an observation deck—like I’m in the clouds.”

The three floors are linked by a striking spiral staircase, which features graystained ash steps that curve gracefully upward around a central steel pole. “The staircase was quite difficult to build,” Josh says. “It was tricky to work around the shape of the house to get that piece in. We had to plan it early.” Onsite communication was key, and Josh and Jenny report that Alford’s swift decision making was a serious boon. “Colleen knows exactly what she likes,” says Jenny. “She wanted a modern interior with a lot of classic materials, like nickle-gap boards, marble, and metal. She felt strongly about her vision.”

Nowhere is Alford’s sense of style more apparent than in the kitchen. The space is a vision in gray (and, Jenny reveals, their website’s most saved image on Houzz and Pinterest). It features custom maple cabinetry with wide rails that have been stained a dark, moody bluish gray. There are brass fixtures, a brass hood (which Alford found at an antique shop), and generous swaths of white and black Carrara marble sourced from Midcoast Marble and Granite in West Bath. The kitchen island is wrapped in a waterfall of marble, which was installed by Al Lindsey, a man Jenny deems a “genius” for his stone-matching skills. She says, “He makes the lines disappear entirely. Seaming seems like a minor thing, but it’s so important. We can reassure our clients that, if Al does the stone work, you’ll have three pieces of marble appear as though they’re all one.”

For Josh, one of the more surprising design decisions was Alfond’s desire to paint the interior window trim black. “It gave it a pop,” he says. “Throughout the house, there is a deliberate balance between traditional elements and contemporary ones. We would take one step toward the traditional side, and another toward the contemporary.” For instance, the doors of the house take a familiar form but have been painted an unusually glossy shade of true black. A neutral color palette may not sound revolutionary, but not many beach houses on the coast of Maine go the grayscale route. “We layered neutral hues throughout the house,” says Jenny. “The kitchen has a bit of blue, but otherwise there isn’t much color. It shows restraint and really gives it a wow factor.”

Like the interior, which marries cutting-edge style with classic materials, the exterior of the structure also plays with expectations. It’s a unique house, but nothing about it looks out of place in the historic neighborhood. “We didn’t want to build something monstrous,” explains Carlson. Many of the summer inhabitants of Prouts Neck have been visiting the same spot for generations. It’s a tight-knit community, and the Alfords wanted their house to appear in harmony with the other cottages and homes on the street. Although the new home is three stories, it looks smaller than it is. Rather than having any large exterior walls, Carlson and Powers set the roofline low. “It’s tall, but it springs from the first story eaves,” Carlson explains. “It creates a softer look, as do the triangular bay windows. We didn’t use your typical boxy bay windows; we went for soft and cozy whenever we could.” The curved eaves, she says, make the house feel “more dainty and smart.” Like the doors, all of the trim on the windows is painted black, which stands out against the soft beige wood siding. Copper gutters and chimneys provide a gleam of color, and Josh says he looks forward to watching them get that “nice greenish patina” as they age. “Copper,” he explains, “is another more traditional element.”

Although Jenny doesn’t like to play favorites, she says this house was one of her best-loved jobs. “I see a lot of ideas out there that get regurgitated, and I take a lot of pride in building something really unique,” she says. “It has won awards, but it’s not the accolades I care about. It’s that our peers recognize an outstanding build.” And this build, from the poured concrete foundations to the shiny copper stovepipes, is exactly that. 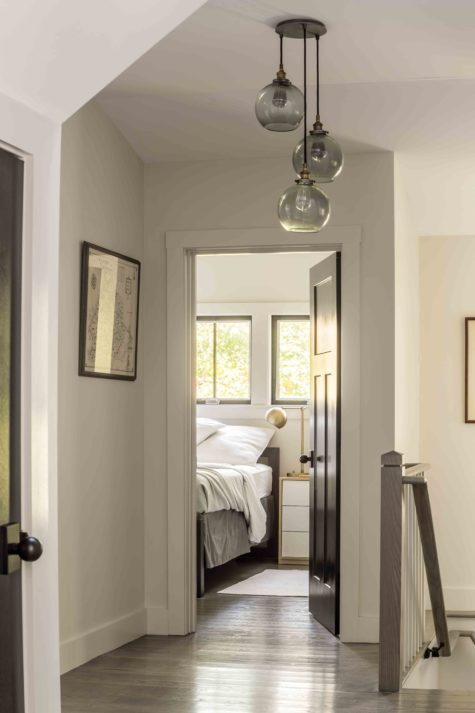 The hallway leading into the guest room is lit with glass globes from Restoration Hardware. 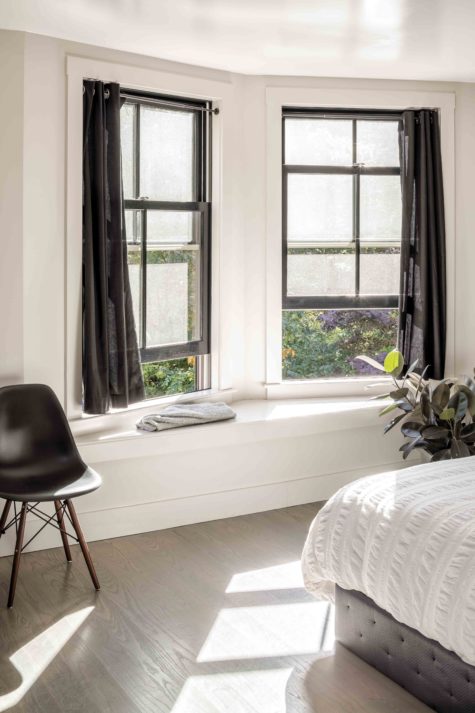 A scene from the owners’ suite shows the dramatic nature of the color scheme (note the black windows and the white high-gloss ceiling). 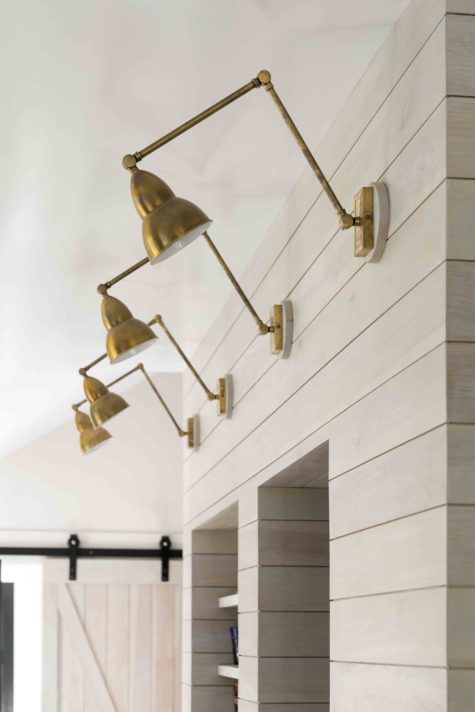 Four brass lights from Circa Lighting illuminate the entryway.