Modern on the Marsh 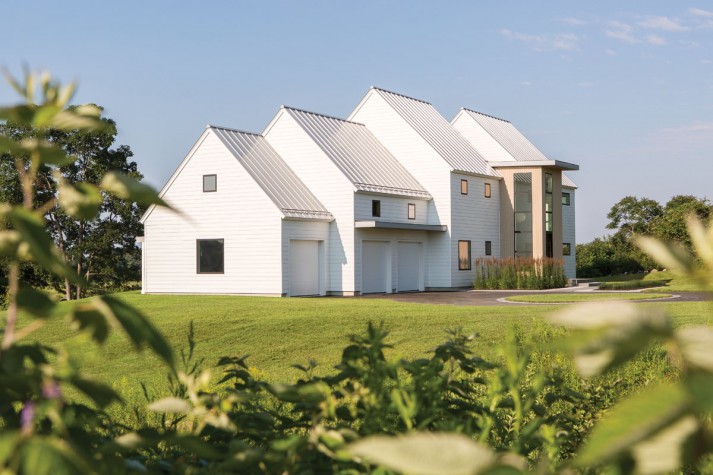 Falmouth architect Kevin Browne designed this house in Cape Elizabeth with four white clapboard gable forms that start small at the garage and get larger at the main part of the house. Wide clapboards and a high- pitched gray metal roof offer a modern take on traditional farmhouse style. The house’s two primary volumes are bisected by a windowed, flat-roofed transept clad in stained cedar siding, which provides contrast and mimics the changing hues of the neighboring marsh grasses. 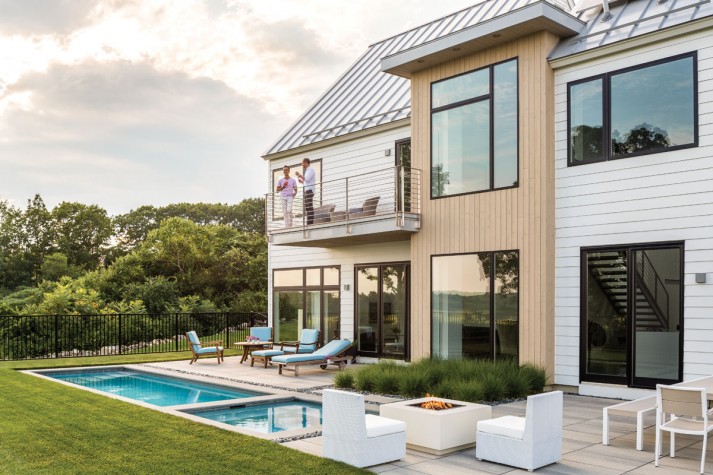 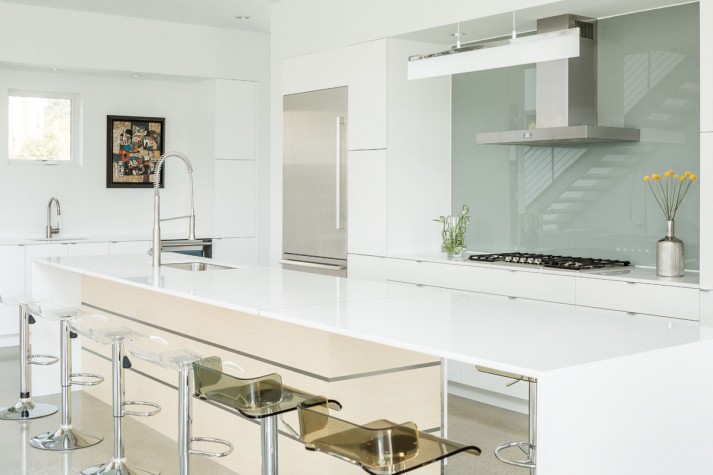 Designed by Tina Rodda of Kitchen Cove Cabinetry and Design in Portland, the kitchen (above) features a 14-foot island with white-washed oak veneer panels in a horizontal grain and Silestone countertops in White Zeus. White slab-style cabinets—Crystal Cabinetry’s Encore line with a Celeste door style—echo the simplicity of the home. The backsplash is back-painted glass custom matched to the metalwork throughout the home. “The biggest challenge was making the kitchen functional while maintaining a very minimalist aesthetic,” says Rodda. In keeping with this approach, the team decided against trim or molding and built in soffits and wall returns to capture the cabinetry. 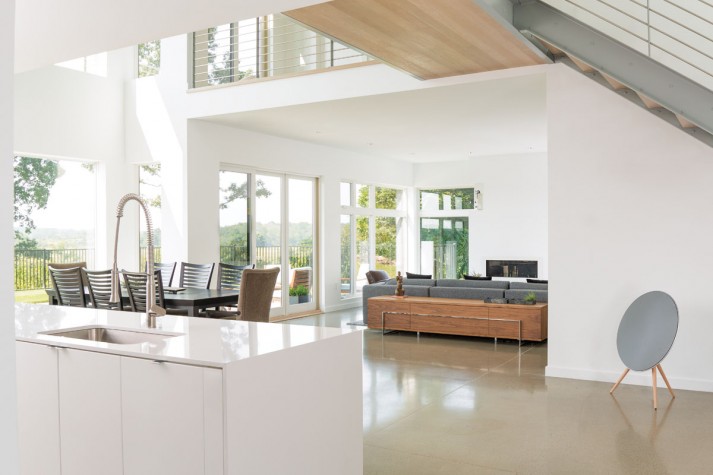 In the spirit of minimalist living, the owners wanted quiet, neutral tones and lots of glass. Crown moulding and other ornamentation are foregone in favor of simple wood windowsills and drywall returns at the windows and doors, white walls, and low-profile furniture in neutral colors. 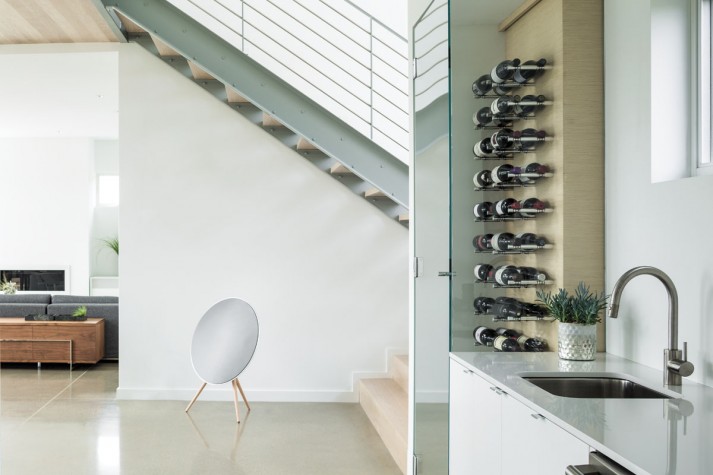 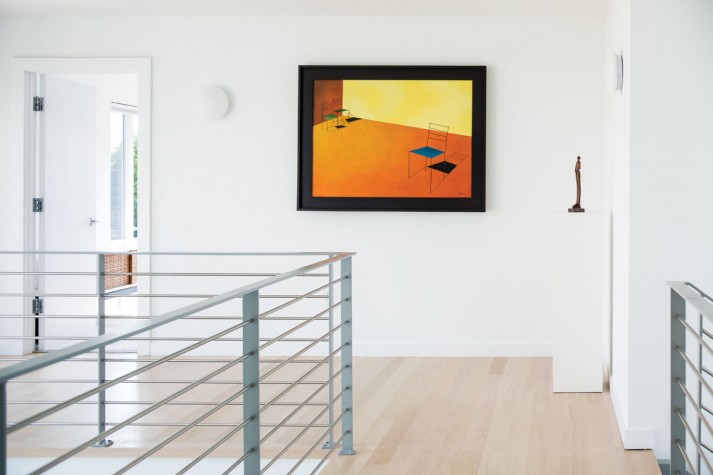 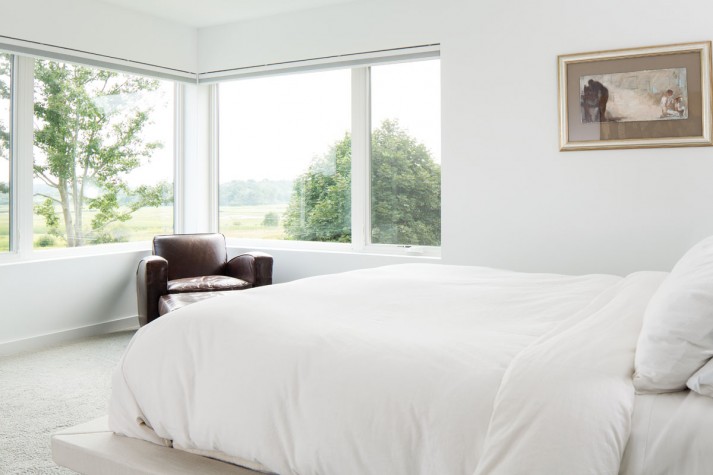 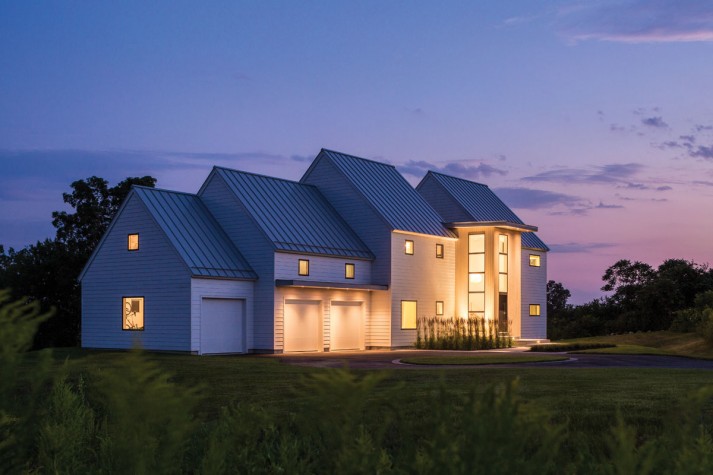 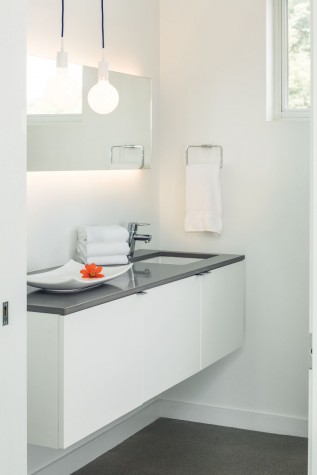 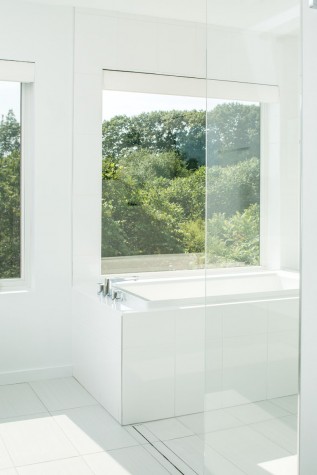 Browne’s design eases transitions between spaces: the owners’ bath is open to their bedroom 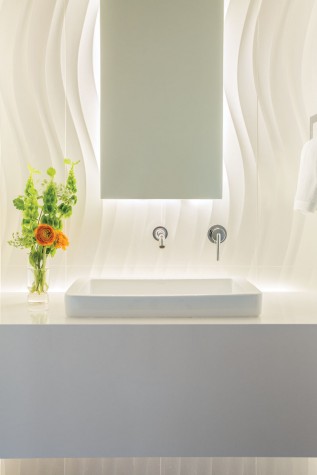 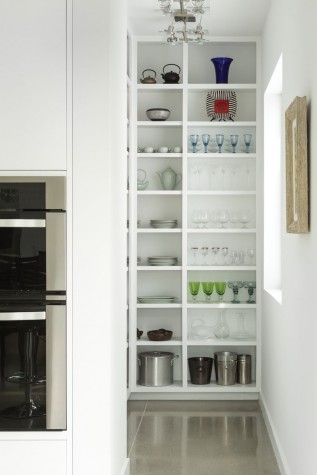 An energy-efficient Cape Elizabeth home is minimalist in style, maximizing openness and views

As elementary-school maxims go, “It never hurts to ask” is one that holds up into adulthood. At least that was the hope of Jeffrey Maine and Andrew Phan when they found themselves in Falmouth one day, ogling the contemporary lines of a recently built house. Rather than admire it quietly, they walked right up to the front door to inquire about the architect and builder. The homeowners, Catherine and Jonathan Culley of Portland-based Redfern Properties, were happy to share: they were the builders, it turned out, and they had worked with Falmouth architect Kevin Browne on the design. “It seemed like the stars were aligned,” recalls Maine of their meeting. After interviews with five architects and several builders, the couple decided to hire Browne and Redfern Properties for the design and construction of their own home. (One might recall another maxim about imitation and flattery.)

Aside from Jeff’s last name, the couple had no connection to Maine prior to moving here. No family ties, no longtime vacation spot, just a deep love and respect for the way of living, the landscape, and the independent spirit the state is known for. Maine, a lawyer, and Phan, a physician, had moved from Texas and were looking for a better balance of work and leisure and greater access to the outdoors. In Maine, they had a feeling they would find everything they were looking for and more.

After living in Falmouth in a house surrounded by tall trees (“lovely, but a bit claustrophobic,” admits Maine) the couple was looking to build on a vacant lot with open water or pastoral views and few trees so they could capture solar energy. They found just what they were looking for in Cape Elizabeth: a piece of land with panoramic views of neighboring Jordan’s Farm and the ever-changing marsh.

Browne’s first task was siting the house on the property to maximize these views and showcase the historic Spurwink Church, while minimizing glimpses of the neighboring homes. “It was a balancing act, as we also sought the best sun angles for passive solar,” says Browne. As a result, most of the glazing is on the south and west sides of the house, while the north side, which faces the neighbors, features minimal windows. The kitchen and dining room were designed to face the marsh, as was the owners’ bedroom, with corner windows that take in the same view from a higher vantage point.

Inspired by the agricultural setting, Maine and Phan envisioned a design loosely based on a farmhouse but with a modern sensibility. “We wanted the exterior to have clean lines and a neutral color palette harmonious with the surrounding landscape,” says Maine. After first considering opposing rooflines, Browne ultimately designed four white clapboard gable forms that start small at the garage and get larger at the main part of the house. Simple pitched roofs and the wide spacing of the clapboards enhance the contemporary feeling. “We wanted to break up the garage and make this more of a linear house,” says Browne. The two primary structures are identical in size and bisected by a windowed, flat-roofed transept clad in stained cedar siding for contrast and to mimic the changing hues of the marsh grasses.

“To us, contemporary, minimalist design and neutral tones provide a calm feeling,” says Maine. Inside the home, crown moulding and other ornamentation are foregone in favor of simple wood windowsills and drywall returns at the windows and doors, white walls, and low-profile furniture in neutral colors. These elements cut down on distractions, allowing for expansive, unobstructed views of the landscape. High interior ceilings and large windows and sliding doors further emphasize the setting and eliminate barriers between indoor and outdoor living, so that the patios and terraces are an extension of the indoor living space. Browne also minimized the number of walls, doors, and hallways to ease transitions from one area to the next and to encourage interaction— in the open kitchen/dining/living area, of course, but also in smaller spaces, like the walk-in pantry, the closets and bath open to the owners’ bedroom, and an upstairs office space that allows conversation between upstairs and downstairs. “Having lived in a traditional colonial house and now a contemporary house, we can honestly say that modern home living seems easier, more functional,” says Maine.

To add some focal points to the streamlined palette, Browne incorporated a few “wow” factors: a floating steel-and-wood stairway bisects the main house from front to back and can be viewed from most areas on the ground floor; a catwalk crafted from the same materials bridges the interior space of the two main gable forms; and an elevated foyer at the entry leads to the first floor.

High on Phan’s wish list was a large kitchen with plenty of space to entertain guests while cooking. Designed by Tina Rodda of Kitchen Cove Cabinetry and Design in Portland, the room contains a 14-foot island with eight stools. There is a separate bar area for drink preparation. Among Maine’s must-haves were the in-ground pool and, for the couple’s many visiting friends and family members, bathrooms in each of the bedrooms.

Outside, landscape architect Soren DeNiord of Soren DeNiord Design Studio in Portland and landscape contractor Keith Stone of Pinnacle Landscape and Design in Cumberland incorporated low-maintenance materials—stone and river rocks— as well as ornamental plants that simulate elements in the marsh and provide the Zen-like feeling the homeowners were looking for. Geometric motifs— rectangular pool and patios; square hot tub and gas fire pit; and plant beds in both shapes—mirror the design of the home.

It takes a certain kind of mentality to live in a modern house. Some people might feel overly exposed coexisting with so much glass, but that doesn’t bother Maine and Phan: with the amount of sunlight streaming in, the winters don’t seem as harsh, says Maine. As for those who say contemporary architecture is too cold, the couple points to the elements they brought in to create warmth, including an earth-tone stained concrete floor, whitewashed oak floors and steps, and Scandinavian-inspired wood panels in the wine rack and under the kitchen island.

As for Maine the state, the couple is glad they moved their lives here. “We couldn’t have picked a better place to live,” says Maine. Evidence of one last, especially useful maxim: Trust your gut. 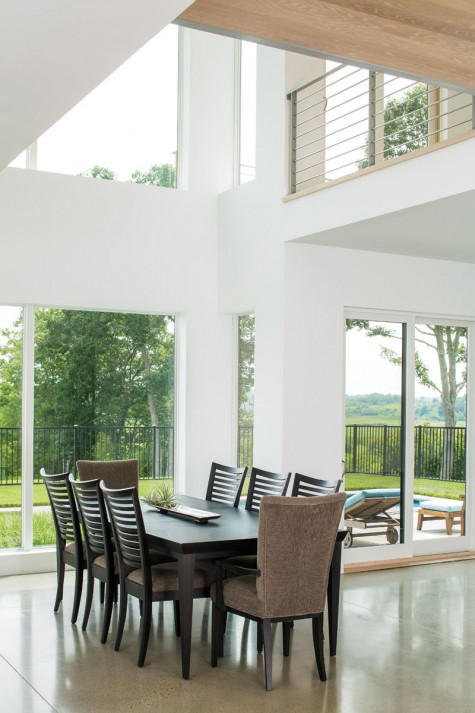 The open kitchen/dining/living area was designed to face the marsh. Tall windows and sliding doors blur the line between indoors and out. 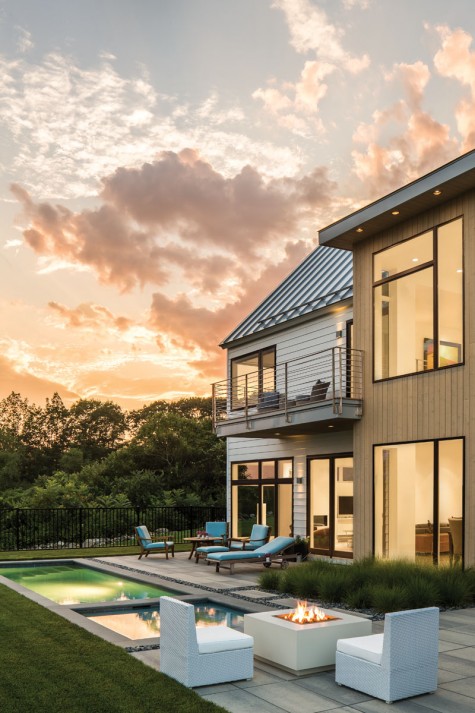 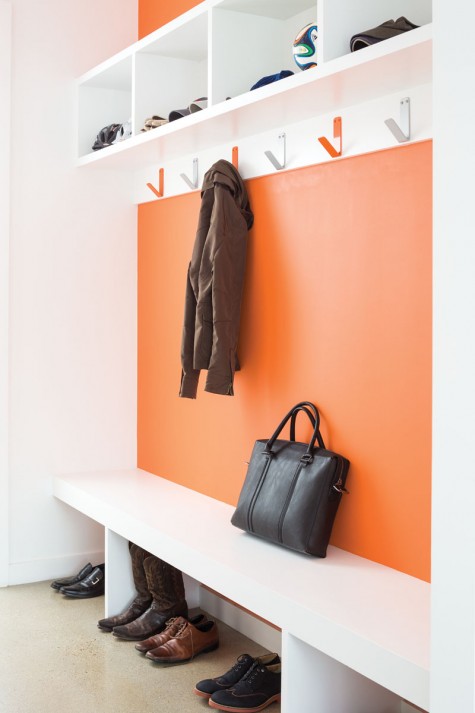