A chemist opts for honest building products for his home near Portland. 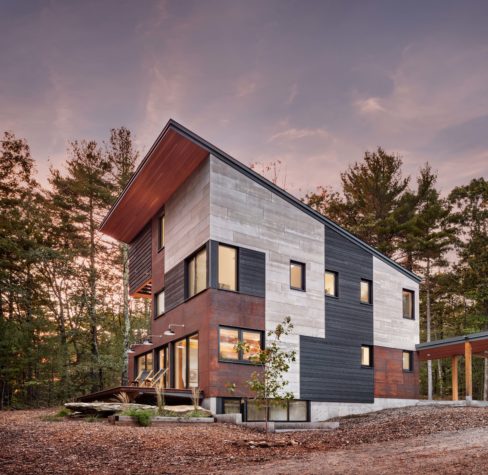 Nicholas Yardy’s new home designed by Portland’s Kaplan Thompson Architects is clad in weathering steel, black-stained cedar, and Viroc, a tough and strong cement board made in Portugal. 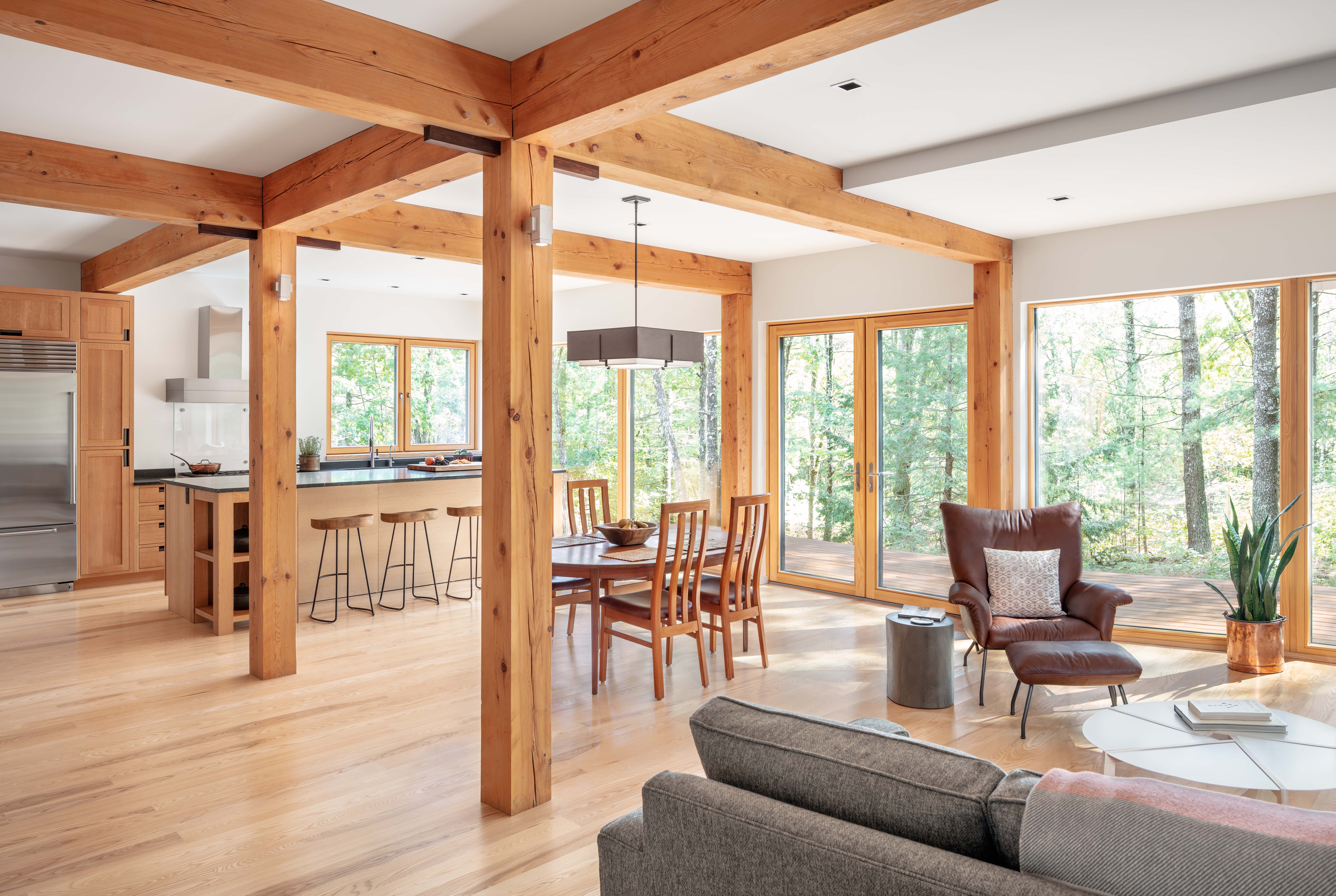 Architect Jesse Thompson describes the interior of this house nestled in the woods as a playful interpretation of layering materials in a creative fashion. 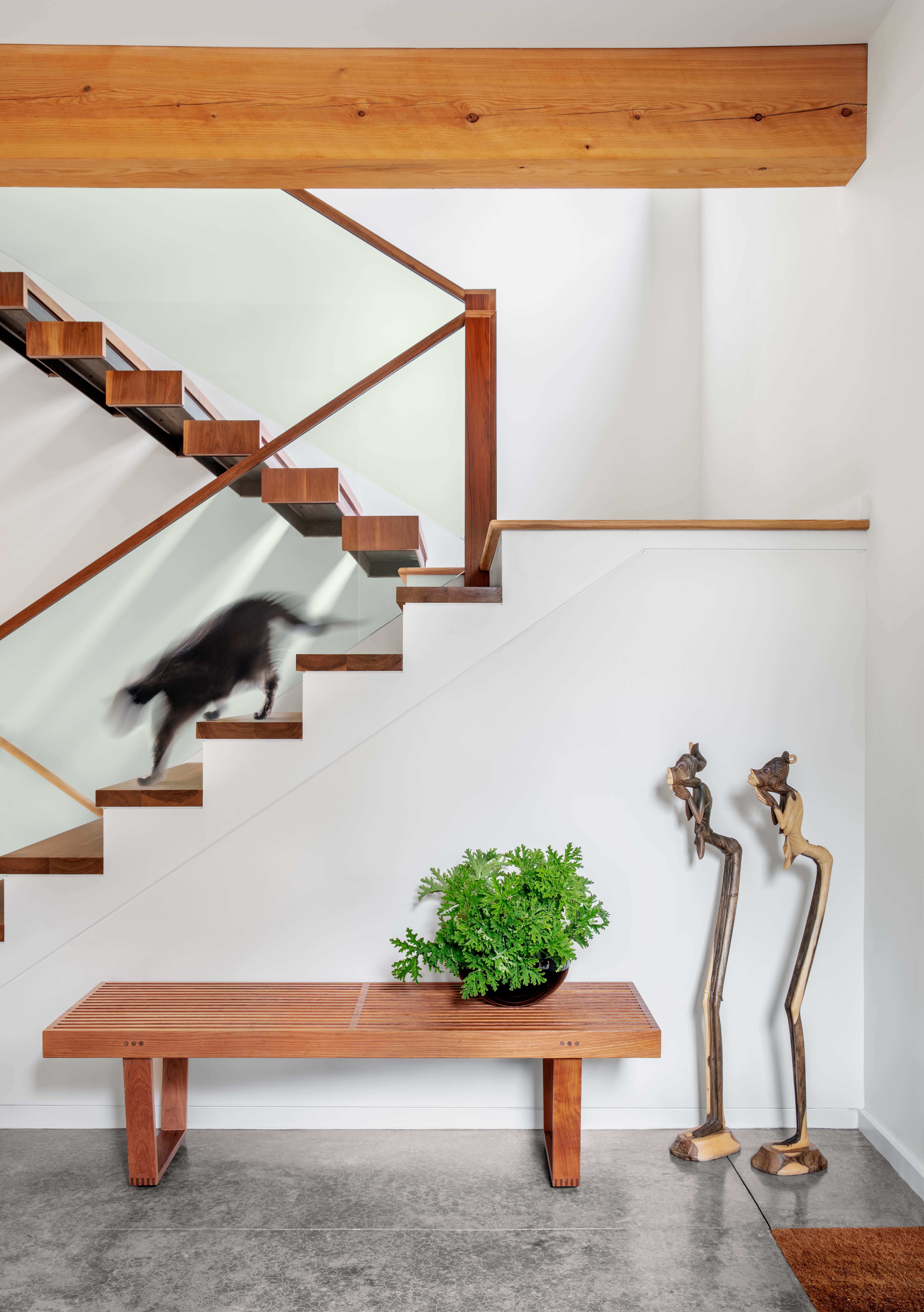 Inside, the architect and builder used locally sourced hardwoods like hemlock for beams and trim—and walnut for stair treads. 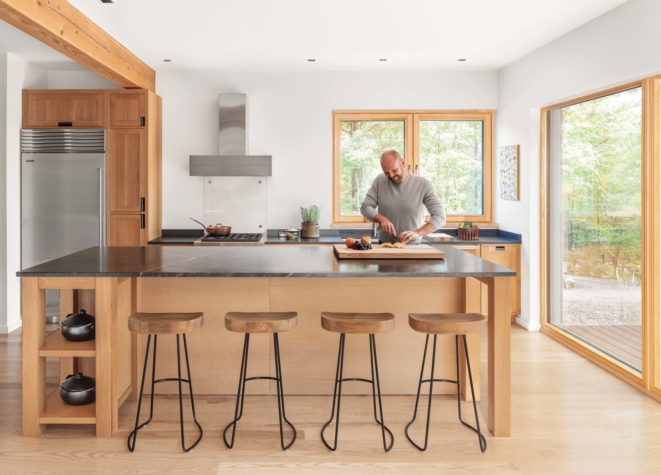 In the kitchen are a soapstone countertop, white oak flooring, and triple-glazed windows from Ireland. 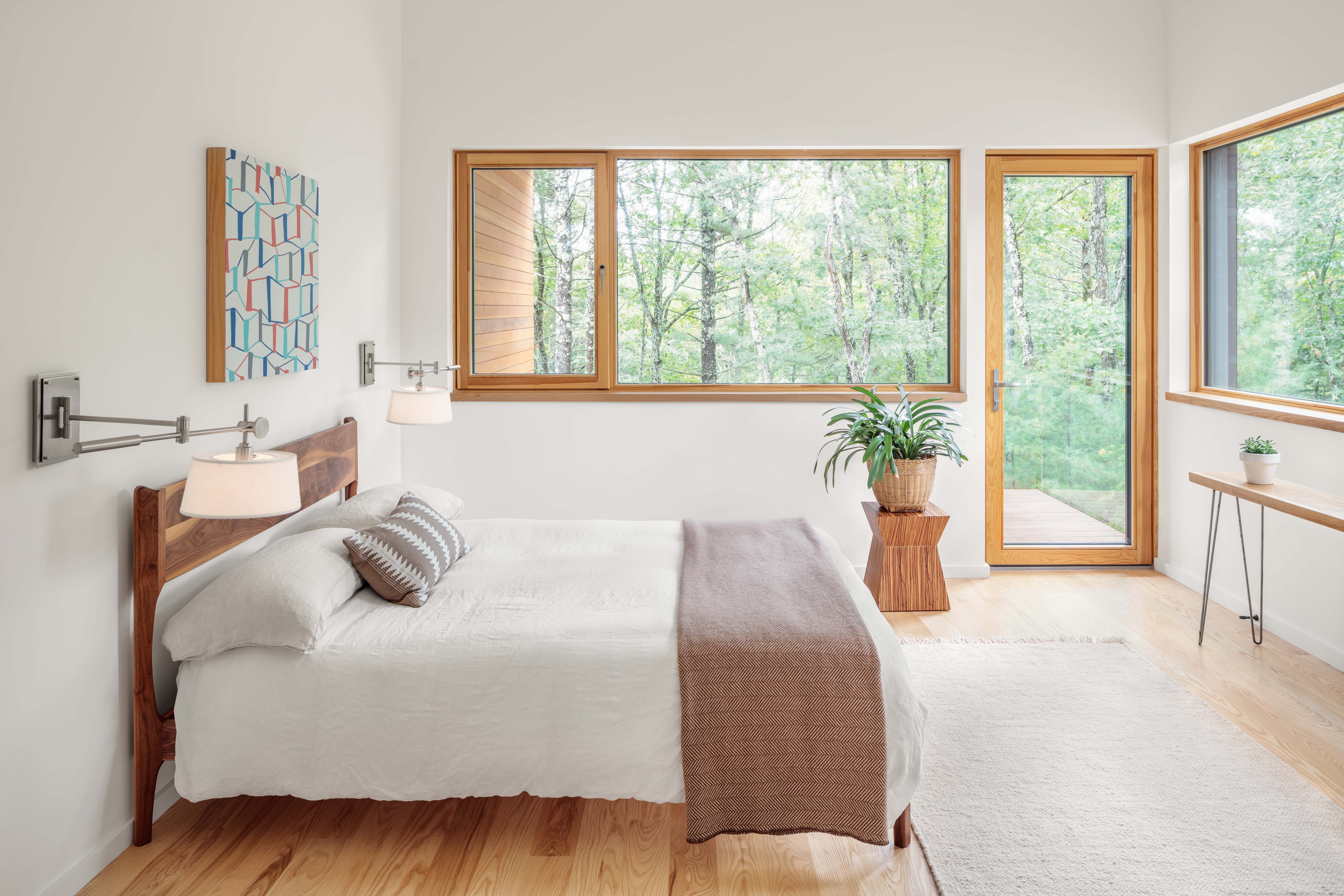 Yardy prefers a traditional Scandinavian architecture and color palette, but one that’s influenced by the industrial feel of inner-city loft structures: hard on the outside and warm on the inside. 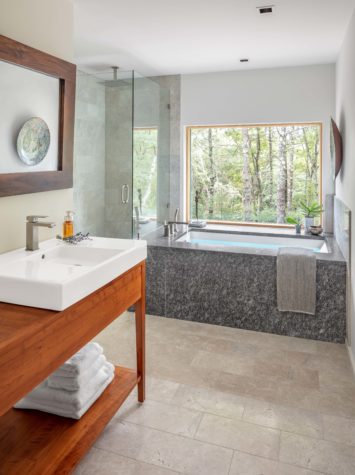 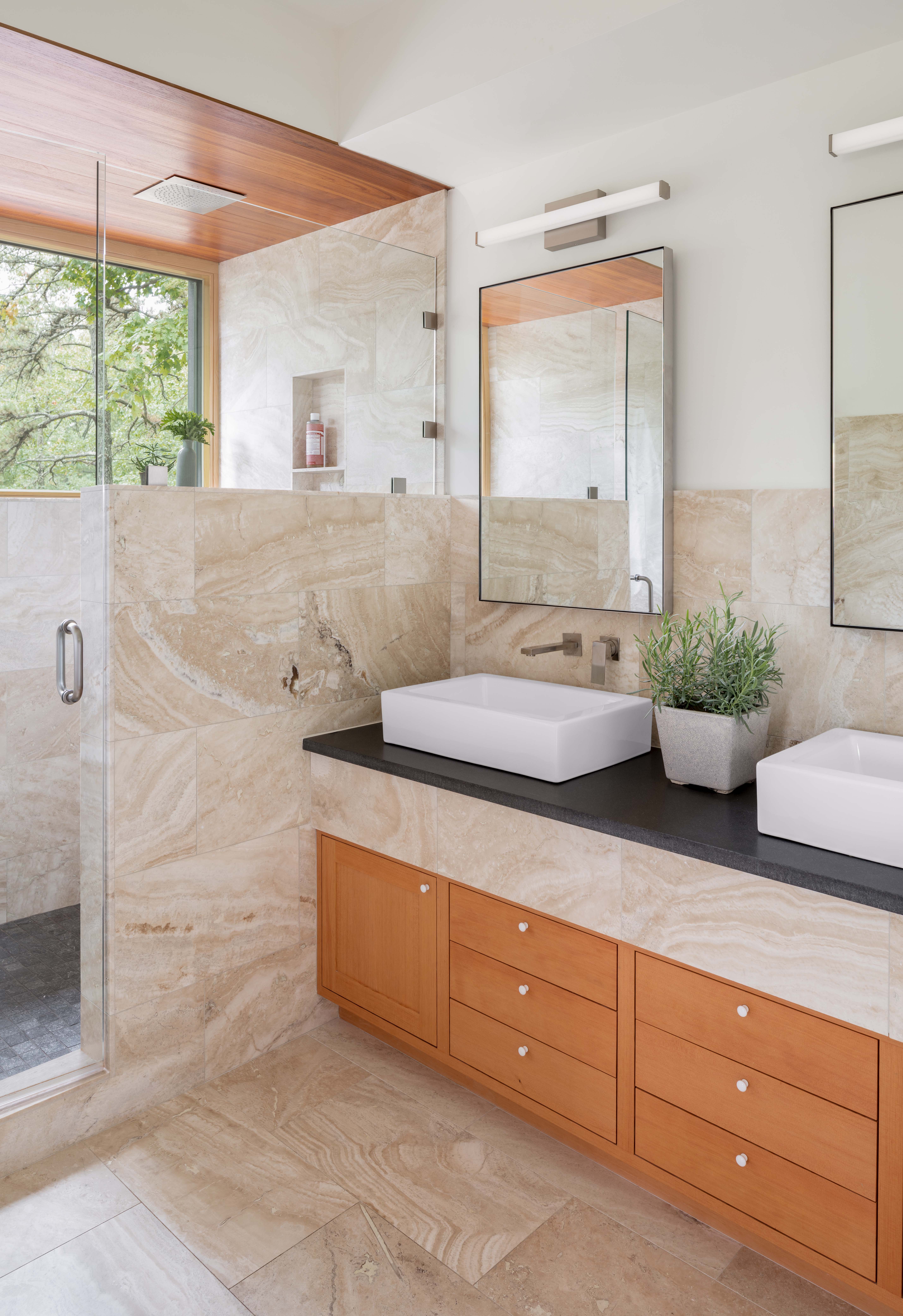 For the exterior, Yardy asked Thompson for the feel of a rough-hewn, natural block of wood. Inside, he wanted a warm look that invites people to touch the surfaces of the materials. Outside, materials include Maibec from Canada, panels of Cor-Ten steel, glass railings, and metal flashing for the roof edges and window trim.

Like the architecture of the home he commissioned, Nicholas Yardy is a study in contrasts. He’s a chemist, a precision-oriented scientist who works in the anything-goes fashion industry. Materiality, rather than drama-fueled turns on a flashy runway, interests him most. “It’s about telling a good piece of leather from a bad one—how soft or dry the surface is, and whether it’s a pleasure to touch,” he says. “In the spirit of materials, conformity is very important to me.”

For the design of Yardy’s 2,300-square-foot, three-bedroom home outside Portland, that material honesty was paramount. “No material should be anything other than what it is,” he says. “If you want sleek flooring, don’t buy ceramic tile that looks like slate, just buy slate.”

He was involved in selecting building products for both interior and exterior, and the outcome is a study in opposites—a hard-versus-soft approach to home design. “I wanted it to be strong and bold on the outside, and on the inside to be very neutral and warm, to invite people to touch the surfaces of the materials,” he says.

The home is on a nine-acre wooded lot 15 minutes from downtown, its crisp, contemporary interior attuned to the surrounding forest. “He’s a modernist, but he wanted it to be both warm and tough,” says architect Jesse Thompson, principal at Kaplan Thompson Architects.

It’s a hemlock timber frame with a walnut spline that joins beams with posts, a decorative form of joinery. Cabinetry is quarter-sawn oak. Floors and doors are ash. The trim is hemlock, and the stairway treads are walnut. “I wanted a neutral color palette where the materials would be obviously what they are,” Yardy says. “There’s a matte, water-based finish for a subtle, calm, warming effect.”

The materials used inside camouflage the home’s form with an interplay of simple, clear, and textured finishes and authenticity. “There’s nothing engineered and no composites,” Thompson says. “It’s a playful interpretation of layering together a series of materials in a creative fashion. It’s like a textured quilt.”

Because Yardy wanted a home with a formidable presence, the exterior is clad in weathering Cor-Ten steel, black-stained cedar, and a Portuguese cement paneling called Viroc. Its form is simple: a cube with a subtracted, sloping roof, nestled into the lot. It’s built near the top of the site, where the land falls away on a gradient slope, and is surrounded by pines, oaks, maples, and hemlocks. “I told the architect I wanted it to feel as if it had been dropped from a plane into the soil,” Yardy says.

The house adheres to the theory of prospect and refuge, as defined in an early-1990s investigation into the popularity of Frank Lloyd Wright’s houses conducted by architect and architectural historian Grant Hildebrand. Hildebrand suggested that Wright’s pattern of enclosure and outlook in residential design addresses basic human psychological and biological needs, saying that this pattern can affect people’s perception of how safe an environment might be. “We are invited to savor danger from a haven of safety,” he said of Fallingwater, Wright’s most famous design in rural Pennsylvania.

Thompson and Yardy took the concept to heart and applied it to the new home. “It’s a theory that human beings are happiest with a cave wall behind them and a fire in front of them, while looking down on the valley where the animals are,” Thompson says.

Anyone inside Yardy’s home has his or her back to the interior—or the safe space—and enjoys a long view to the landscape and beyond. “If you’re in the kitchen, you look out to the cleared forest and the vegetable garden and the landscape he’s built,” Thompson says.

That vista is to the south. But there’s another from the second floor. There, Yardy has a view to Mount Washington farther to the west. “It’s 100 miles away, with a 6,000-foot peak,” Thompson says.

Views are through triple-glazed and tilt-turn windows from Europe. They’re part of the total package of passive design that Yardy sought. “I wanted to get Passive House certification, because I wanted a home that requires asfew inputs of petroleum as possible,” he says. “Oil may be cheap today, but the lesson of 2008 applies. I wanted a house with very low petroleum demands in terms of heating and cooling.”

That’s precisely what architect Thompson and general contractor Ben Hemberger of Benjamin and Company delivered. Walls are 12 inches thick and packed with nontoxic cellulose fiber to avoid spray foam, because of questions about spray foam’s potential harm to the environment. The insulation runs up the walls and over the roof, and it’s highly effective.

“There’s an all-electric pump system that’s hidden, but you can heat this house with a candle,” Thompson says. “It will survive a power outage. It would never freeze up in winter and never get below 50 degrees. You can heat it by cooking in the kitchen.”

Because the team installed a sophisticated fresh-air ventilation system, Hemberger’s team was able to air seal the house to three times the Passive House air sealing metric. “They closed up every gap and crack, so we know the fresh air is coming from where it should be and not the basement or carport,” Thompson says.

That led to some unusual fine-tuning for the home’s heating equipment, which struggled at first to operate at the low levels the house needed. “We had to make adjustments to the mechanical systems and machinery to work at the loads that it requires,” Hemberger says.

Yardy, Thompson, and Hemberger eventually chose not to go through the rigors of certifying the house as passive, but designed and built it with those principles in mind. “By January of the building season, we had it closed in and insulated, and to dry it out we were running a dehumidifier,” says Hemberger. “The building envelope was pretty well designed and executed to hit those benchmarks. If you lit a fire in the woodstove, the temperature would skyrocket.”

The new passive home gives Yardy—who’s not the typical client for a builder or architect—the perfect environment to work through measurements and the scientific method in his new digs. “He’s a young, incredibly intelligent chemist who has time to do a lot of research; he gathers a lot of information and measures a lot of things that happen with his house,” Hemberger says. “He’s very scientific, a thorough and thoughtful person, but not in a difficult way. He’s very design-driven. Small details really matter to him.”

Thompson agrees. “He’s very analytical and had a strong emotional sense of what he wanted out of the building: he wanted a perfect cube that would remind him of a chemical element,” he says. “We had a flat roof at first, so it was 32 feet on all sides—with height, width, and roof deck—but we decided it was better to have an expansive roof with a deck, pitched for rainwater.”

Yardy knows how to collaborate too, and he didn’t hesitate to get involved, especially in choosing building products. “In my job, I spend a lot of time at fashion events, so I see a lot of materiality,” Yardy says. “It’s a strange place for a chemist to be.” But his home is anything but strange; it’s an insightful reflection of its owner.

Inside, the architect and builder used locally sourced hardwoods like hemlock for beams and trim—and walnut for stair treads. 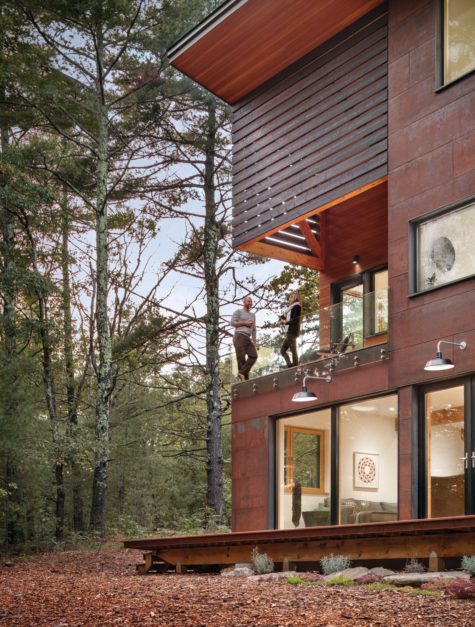