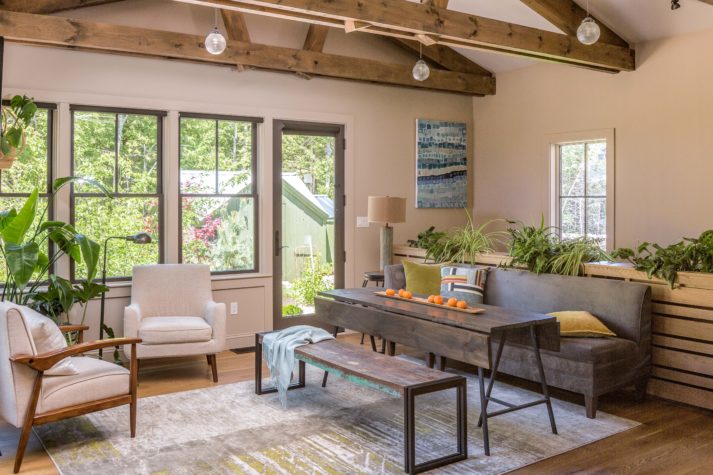 In the main living area, a table made by the homeowner is separated from the basement stairs by a wall of planters designed with the help of Brooke Luro of Rewild, an interior plant design company. A painting by Maine artist Marci Spier hangs over the stairs. The exposed rafters, which run through the home and continue to the exterior, create visual separation as well as connection between the living spaces. 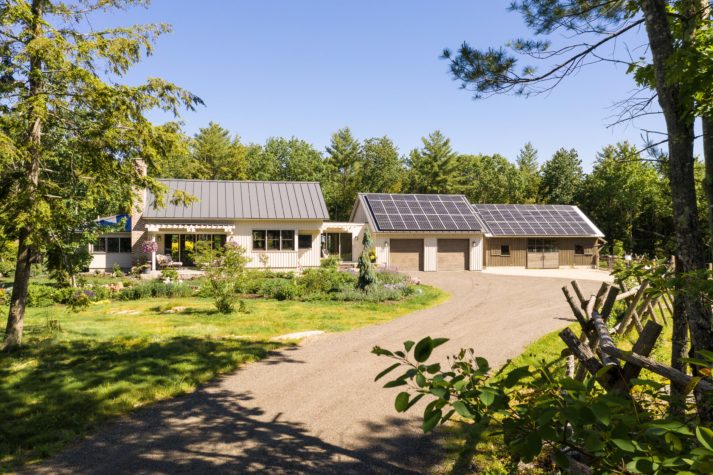 The compact, single-story home was built for energy efficiency, with triple-glazed windows and extra insulation to maximize R-values. Deep roof overhangs and the home’s orientation on the site reduce heating and cooling demands. 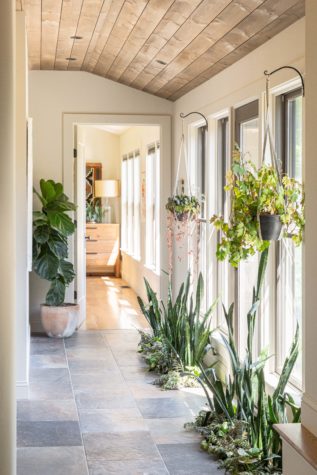 Three bedrooms open off a peaceful hallway, where floor planters and hanging plants make a green connection to the courtyard on the other side of large double-hung windows. 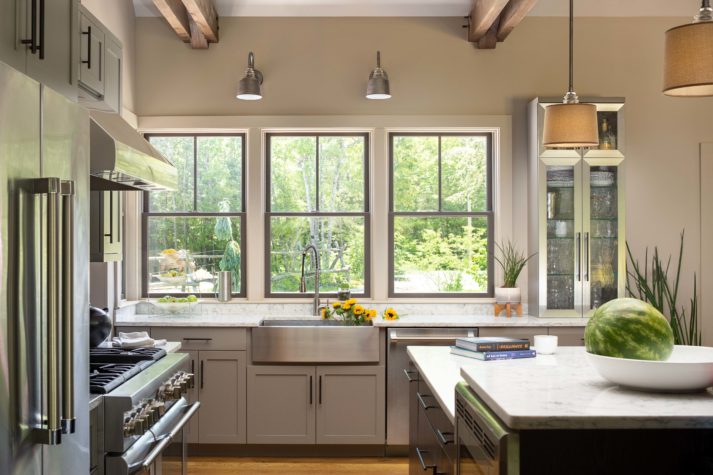 Angella Spugnardi of Home Again by Hancock Lumber designed a cook’s kitchen with a large quartz-topped island and plenty of storage space. A separate pantry keeps clutter out of the cooking area while a simple palette of gray, beige, and white keeps the space calm. 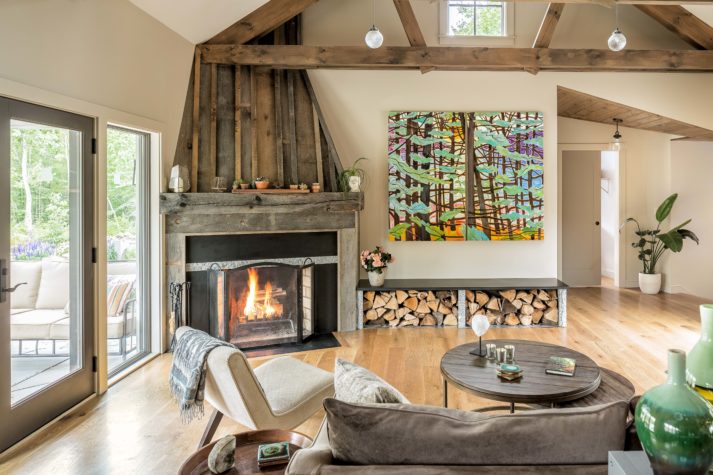 A highlight of the home is the wood-burning fireplace built by Raymond Dussault. Project foreman Butch Rush of Douston Construction covered the surround with weathered barn boards that echo the exterior board and batten. The acrylic landscape painting titled Morning Glory by Maine artist Jane Dahmen adorns the living room. 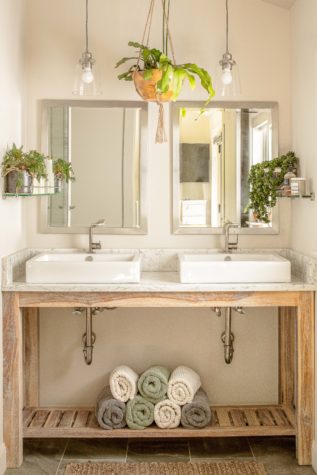 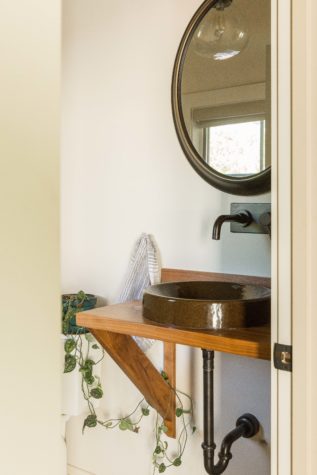 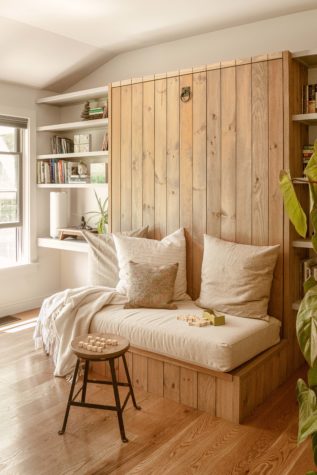 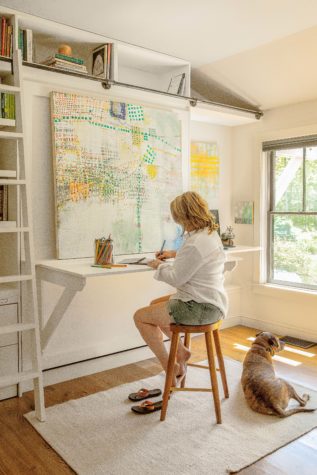 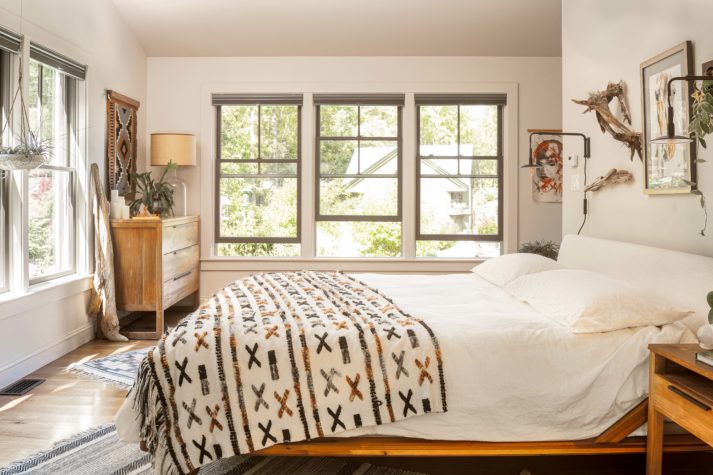 The owners’ bedroom is filled with objects of personal significance, from found driftwood to a rug bought during a visit to the Pryor Mountains of Wyoming, the home of their mustang Firefly’s sire and dam. 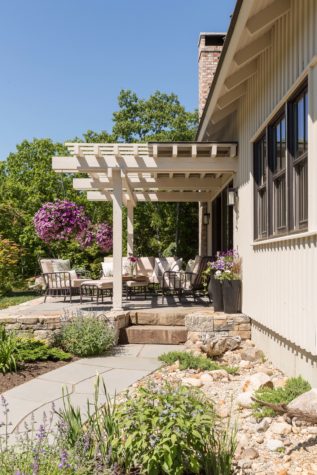 Landscaper Kris Lagasse made plentiful use of pink granite found on the site. The exterior is covered in northern white cedar board and batten, with a portico that extends from the interior rafters. 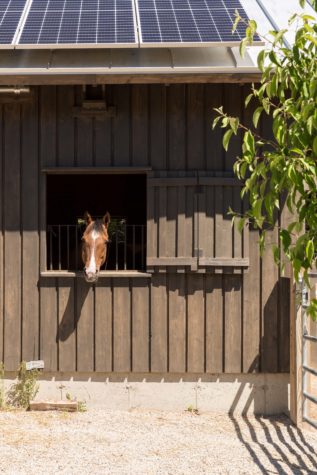 The family’s horses, including the mustang, Firefly, were the site’s first tenants.

The first thing was a place for the horses. The couple had grown up in Maine, lived in Massachusetts for a while, and returned to raise their children. They lived in a big home on the shore while their children grew up, but as the youngest members of the family were finishing college, the couple were thinking about downsizing. They were also thinking about barns. After years of boarding her horse at a local stable, says the wife, “I knew we wanted to have a place where we could bring her home,” so they set out to find land where the family and horses could live together. The piece of land the couple found isn’t far from the family’s old coastal home, but, surrounded by woods and accessed by dirt roads, it has the feeling of a much more remote property. The driveway runs along the paddock, which now holds a donkey and a mule along with two horses, and passes the barn and some of the gardens that have been maturing since the home was completed in 2015. Architect Caleb Johnson says this pastoral experience isn’t an accident. “We centered the siting of it with the idea that you would drive by one of the paddocks and experience the horses on the right side when you drive in. We had this dreamy picture of one of the horses sticking its head over the fence, and that’s really what you get.”

Before the architectural design, however, came the barn. The homeowners worked with Shawn Douston of Douston Construction to create a home for the horses, and it quickly became clear that he would be building the people’s house, too. “When we met Shawn it was just kind of an instant thing. It was easy,” says the wife. “At that point we hadn’t decided who would build the house, but even before he got the barn up, it felt like home. We didn’t even get bids; we knew Shawn would do it.” The homeowners were on-site frequently during the build; Douston says the wife was “almost part of our crew.” “The best choice we made by far were the people we chose to partner with us in this project,” she says. “We would drive over here and we’d be giddy, really pinching ourselves, because we all fit so well working together. That comes through when you walk through this house and you see the attention to detail that Shawn paid and the design that Caleb created; it all worked so well together.”

Less easy for the homeowners was the transition from a large house to a more compact space. “The hardest thing was coming from a very much bigger home, figuring out how small we can go before we’re uncomfortable,” the homeowner recalls. “We worked hard to keep true to our goal of downsizing and simplifying, keeping that first and foremost in our minds. It can get so easy to get carried away and say, ‘We need to add this, we need to add that.’” Johnson and his then-colleague Cat Sumislaski (now of Mobile Studio Design) helped the homeowners see potential in small spaces. “Everything is designed to be cozy and tight to the landscape,” says Johnson. “We tried to make a really interesting flowing structure that is easy to get around inside for a couple that’s hoping to age in place, and easy to get out in the landscape whenever the mood strikes you.”

The landscape is a constant presence even from inside the home, its gardens, pastures, and trees on display through windows that are triple-glazed for efficiency. A standout feature is the hallway that leads to the bedrooms, its outside wall filled with large windows that show off the back courtyard. “Hallways, since the middle of the last century right through to the present, have always been thought of as negative things, as a waste of space,” Johnson explains. “This one is this long hallway that ends up being a procession on the way to the owners’ bedroom. It’s pretty unusual in a floor plan these days.” Douston notes that the layout is unusual in other ways. “The way the floor plan is laid out, the hierarchy isn’t driven by the level of finish but by the floor level. To go to the restroom or the bedroom wing, you go down a couple of steps. As you’re going through the house you have the feeling that you’re at a higher elevation in the main area. Going down the hallway to the bedroom, you’re going down a couple of steps, you’re looking outside, you feel like, ‘I’m going to bed.’”

Many homes are designed to “bring the outside in,” but this residence takes it to another level. “In every room in the house there is a designated area for plants,” says Crystal Wilson of Douston Construction, who helped design the space-saving Murphy beds in the guest rooms. Planters are set into the floors in the hallways, so that the large, elegant shapes of stems and leaves reach toward the windows from inside as well as out. The living room features a “wall of interest” that screens the basement stairs with a row of planters. Even the shower includes a structure that holds moisture-loving plants such as orchids. “The plants are part of the house, rather than a topical treatment. They create a connectivity to the exterior and different oases within their area,” says Wilson. “It’s a pretty incredible experience being in the home because of that.”

With so much color and interest coming from the plants, the homeowner kept to a palette of soft neutrals for walls and trim. “We knew we were going to have a lot of life in here, so we didn’t want a lot of color. We kept everything as soft and natural as we could,” says the homeowner. “We did the windows dark so they would recess, and the exterior would come forward.” The exterior continues the theme of subtle interest created through texture and structure, with board-and-batten cedar siding and exposed rafter tails creating dynamic patterns. “We like to use the structure as an architectural tool to both define space and find interest, to serve a whole bunch of purposes,” says Johnson. For example, he says, “You see some very interesting details in the porches and pergolas on the approach side of the house. We used a process of stacking beam upon beam, board upon board, to develop a sunshade that turns into a porch that turns into the roof of the home.”

When I visit the home, it’s a rainy day, and it’s a peaceful, cozy experience to look out at the gardens from indoors. But the landscape is designed to be occupied, with stone from the site crafted into patios and walkways between the gardens. The wife has loved gardening from childhood, and now it has become a family affair. Her husband has a vegetable garden in the back, their daughter focuses on interior plantscaping, and their son, who is studying ornithology, is helping to design habitats for birds. In planning the home and the grounds, says the homeowner, “I tried to make sure that we honor this land, that we honor what’s around us so that it doesn’t compete with it; it flows with it. I make sure we have plants that are going to keep the bee population, which will pollinate our apple trees.” The house and barn down the dirt road in the woods are new, but they’re built to connect with the land. As the gardens grow, the insects will buzz in and out, the horses will toss their heads, the dogs will chase squirrels down the paths past the gardeners. The home will be alive. 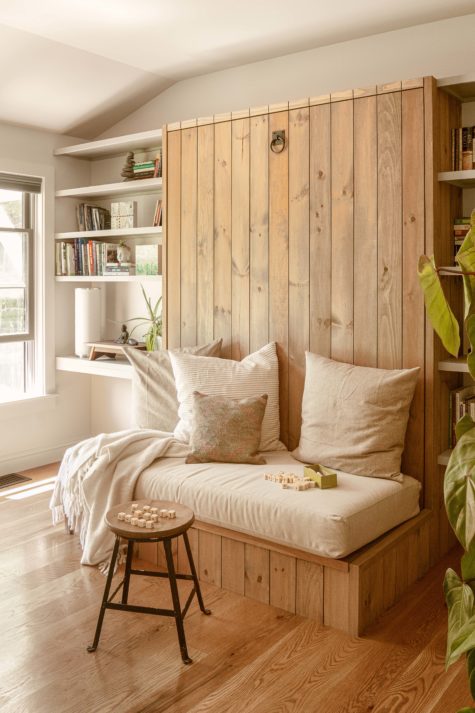 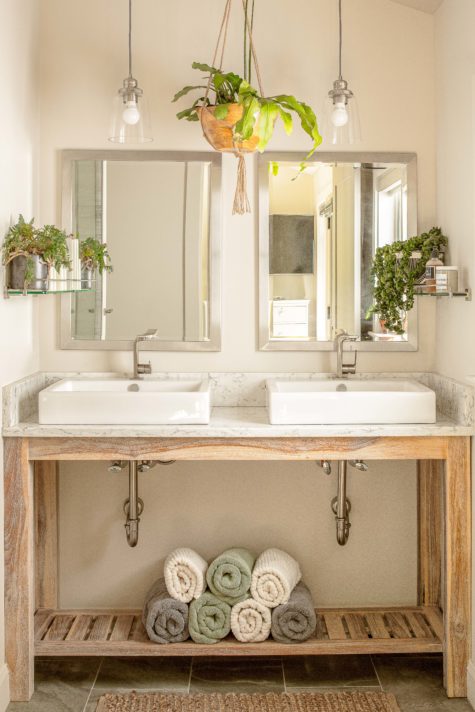