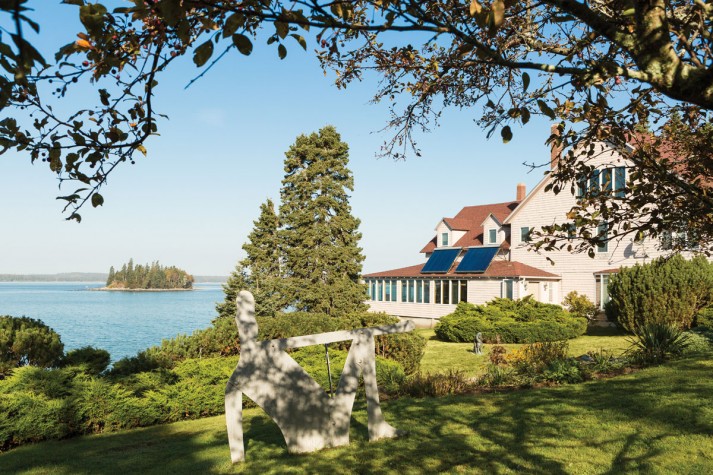 This view of the Marin home shows the original house, which dates to the early 1900s, and one of the original porches, now glassed in, where John Marin painted. The solar panels were likely added in the early 1990s. William King’s sculpture Easy in the foreground depicts John Marin Jr., who often sat on the lawn. The sculpture near the porch is by William Zorach. 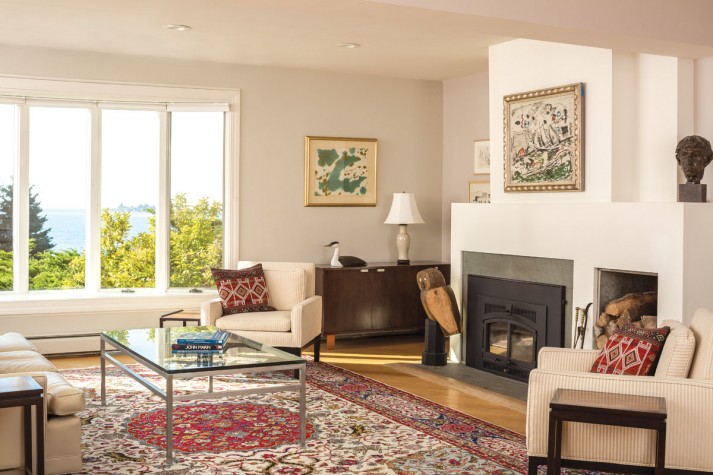 The living room features a wooden owl by Louise Kruger, an artist-friend whose work Norma and John Jr. showed in their gallery and, over the sideboard, Water #4, painted by Lee Krasner in 1969. Above the fireplace is John Marin’s 1948 oil Sea with Boat in Greys, Greens, and Reds. Because he could not get good frames during World War II, he bought stock frames, which he carved and painted gold. 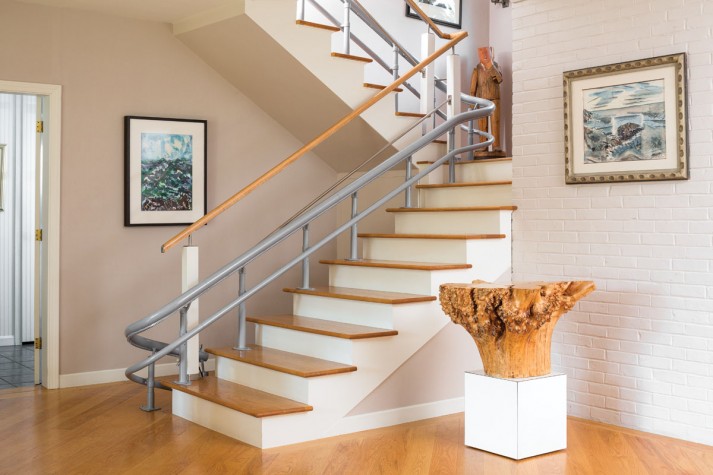 The stairs that used to separate the gallery floors now separate the living room from the owner’s bedroom. They were designed to permit a “graceful, gradual approach to the upstairs,” rather than a single long flight, says Lisa Marin. The stump sculpture is by Ray Carbone of Steuben. The watercolor to the right is Marin’s Composed from My House Outlook 1942. To the left is a watercolor, wax, and acrylic work by Terry Havey Hilt titled Schoodic Point 1. 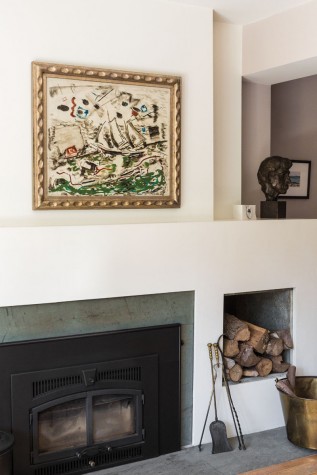 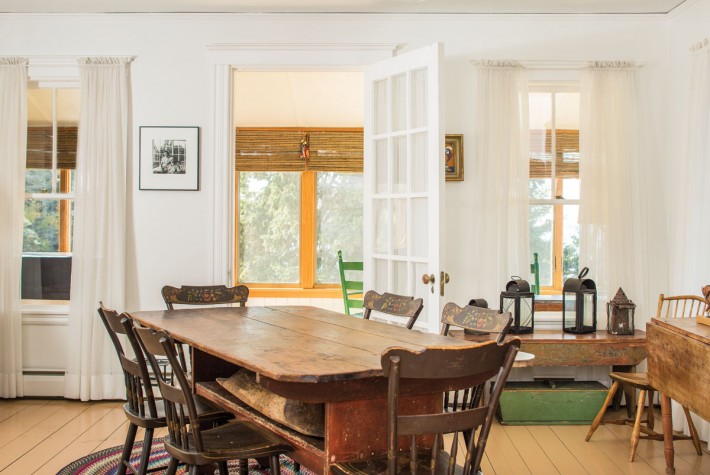 An antique table Norma acquired in Pennsylvania anchors the dining room. The modernist painter and photographer Charles Sheeler took the photo of Norma and John Jr. to the left of the door. 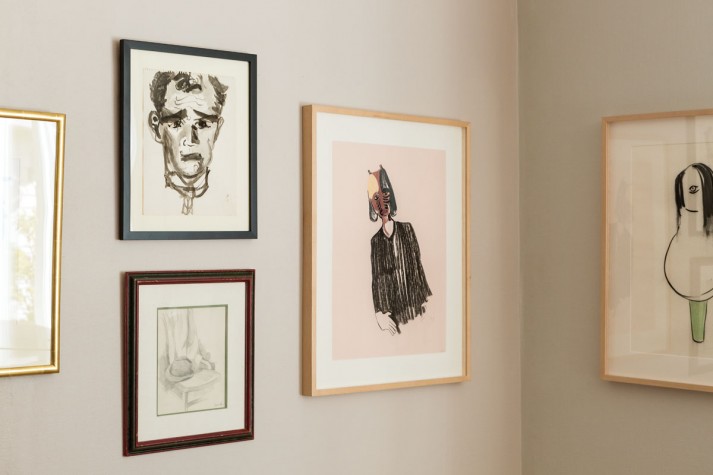 The artistic legacy of a modern master on Cape Split

Norma Marin first saw Cape Split on Bastille Day in 1955. “I arrived around two o’clock,” she recalls. “It was breezing up, and there was a shimmer on the water.” Her new husband, John Marin Jr., has brought her to the summer home of his late parents. For hours, as they made their way toward the promontory in Addison known as Cape Split, she’d been saying, “Are we there yet?” And then they were there: in front of an unprepossessing turn-of-the-century house perched above boulders, with wide views of sand, sea, sky, spruce-dotted islands, and, in the distance, Tunk and Cadillac mountains. In a manner of speaking, Norma had already seen the view, as her late father-in-law—John Marin, the great American modernist championed by legendary photographer and art promoter Alfred Stieglitz—had captured its essence in many watercolors and oils. Still, she wasn’t fully prepared. “I was overwhelmed. I thought it was heaven,” she says. Occupancy of the home wasn’t immediate, however, as another celebrated American modernist—the painter and photographer Charles Sheeler—was staying there with his wife, Musya, also a photographer. Norma and John Jr. decamped to the property’s small, furnished cabin, and Sheeler hung a sign on the door: “Honeymoon Cottage.” Over the next decades, Norma and John Jr. would bring a whole new generation of artists to Cape Split’s shores.

They were continuing a legacy that started with the senior Marin, who was often seen with his easel atop oceanside boulders or on one of the porches (all eventually screened or glassed in) that wrap the house. John Sr. had been painting in Maine since 1914, spending most summers in the state while wintering in New Jersey. He started out in the Small Point area of Phippsburg, then moved to Stonington in the 1920s. In 1929 friends encouraged him to visit New Mexico, and he spent that summer and the next painting roughly 100 watercolors in the Sante Fe and Taos area. (Georgia O’Keeffe was among those making the appeal. Marin was later Stieglitz’s best man when they married.)

Eventually Herbert Seligman, a writer-friend whose wife’s family was from Cape Split, told Marin about the area. Seligman “thought it would be perfect: quiet, small, unspoiled, a great place to work,” says Lisa Marin, Norma and John Jr.’s daughter and John Sr.’s sole grandchild, who lives in Jonesport. “And, of course, it was.” John Sr. first visited in 1933. A year later, he bought a house from the widow of Henry Prentiss, the lumber baron whose company, Prentiss and Carlisle,isnowaBangor-basedforestresourcemanagement company. From then until October 1, 1953, when Marin died in the home, he came every summer, often staying into the fall. He was a prolific painter, while also finding time to entertain fellow artists like Marsden Hartley and Fairfield Porter. The largest collection of John Marin’s work—the Cape Split pieces, as well as urban images of New York and Europe— is at the National Gallery of Art, but the second largest is here in Maine, at the Colby College Museum of Art. Museum director and chief curator Sharon Corwin, who has visited Cape Split many times, says, “You can really understand Marin’s modernism when you see the site. You see the cubism in the rock formations. He and the people in his circle were so revolutionary because they took the lessons of Cezanne and Picasso and applied them to American subjects like the Maine coast.”

Lisa, who teaches are in the Jonesport public schools, has no memories of her grandfather—he died three years before she was born—but she grew up always aware of his presence, in part because her family was so enmeshed in the art world. John Jr. worked for various New York galleries before focusing exclusively on the Marin estate. (Now, Meredith Ward Fine Art in New York serves as sole representative.) Lisa remembers once, when she was four years old, having dinner in a New York restaurant, a man with a white beard stopped to visit with her parents. He turned to her and said, “I bet you think I am Santa Claus.”

And he was. (The venerable photographer had introduced Marin to Stieglitz.) Lisa also remembers going to the 50th- anniversary New York Armory Show exhibition in 1963, where she met Abraham Walkowitz, another member of the Stieglitz circle. Walkowitz was one of the few artists from the pathbreaking 1913 Armory Show, which introduced Americans to European avant-garde painters and sculptors, who was still alive. Walkowitz was blind by then, and he put his hands on her face to get to know her.

Although she grew up in New York, Lisa always summered in Maine, and when she was 18 her family moved to Cape Split full- time. Her girlhood memories are of a community where she could wander freely throughout the day, stopping by a neighbor’s if she wanted a cookie. Old-timers spoke lovingly of Lisa’s family. Back in the day, Addison locals had been very protective of John Sr. and his privacy. Her house, she says, “wasn’t set up like a shrine, but everything was there in suspended animation.” Indian baskets full of rocks that her grandfather had collected and an old piano that belonged to Prentiss’s widow sat on the side porch. John Jr. even continued his father’s evening practice of lighting a kerosene lamp when visiting with neighbors.

The gallery ran for eight years, initially year-round then seasonally, before closing when John Jr. became terminally ill. Now, the gallery’s downstairs consists of a large living room, and the upstairs is Norma’s bedroom, while the old part of the house has the kitchen, dining room, and a sitting area. The art of the gallery’s former rooms references its history, Marin’s work, and the family’s friendships. The living room includes a wooden owl sculpture by Louise Kruger (who once showed at the gallery), a lithograph by Marsden Hartley (who lived for many years in Corea, 40 minutes away), and a 1928 Gaston Lachaise bronze bust of John Marin. (Lachaise also made figures of other notables of the day, including Georgia O’Keeffe, Marianne Moore, and E.E. Cummings.) Marin’s own 1948 oil Sea with Boats Painted in Greys, Greens, and Reds hangs above the fireplace in a gold-painted frame with almond-shaped divots. Because frames were scarce during World War II, he purchased stock frames and carved and painted them himself in order to “extend his vision out beyond the actual painting,” says Lisa.

A poster for Cape Split Place’s Paul Strand exhibit hangs in the foyer. The featured photograph is of Susie Wass Thompson in the doorway of her barn. Wass Thompson, a self-taught artist and mother of six, lived in Cape Split and took care of the Marin house when the family was gone. A close friend, she appears in some of Marin’s paintings as well. Lisa says, “They called her the spirit of the Cape, because she had a lovely way about her. Although she had little formal education, she had the curiosity and drive to learn. She always seemed so wise.”

Norma is now 85 and still conducts family business from the home. “That Cape Split seemed to me like heaven is the reason I am back here in my last years,” she says. “My father-in-law died in this house, my mother died in this house, my husband died in this house, and I hope and pray that I will also die in this house.” Recently, Norma had cataracts removed from her eyes, an enormous relief for her. “I had to do that so I can keep looking at pictures. I couldn’t live without pictures,” she says, and this is evidenced by the walls around her and by the stretch of sea and sculptural shore framed in her bedroom window—the big picture Marin so tirelessly celebrated. 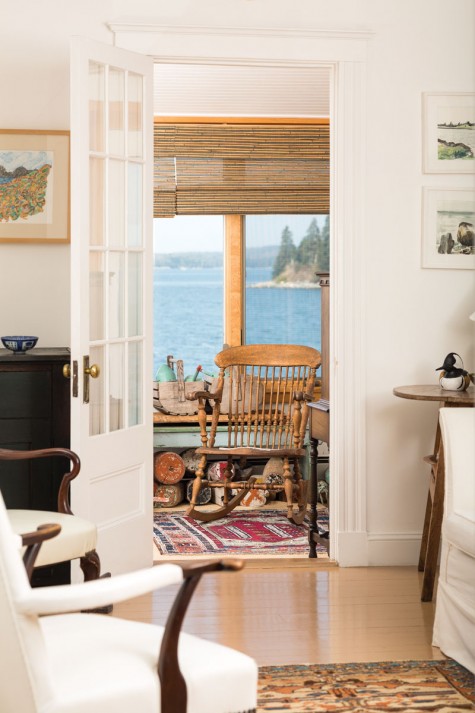 A side sitting room gives way to one of two porches. The rocking chair is likely original to the house, which was purchased by Marin in 1934, 20 years after he first began visiting Maine in the summers. 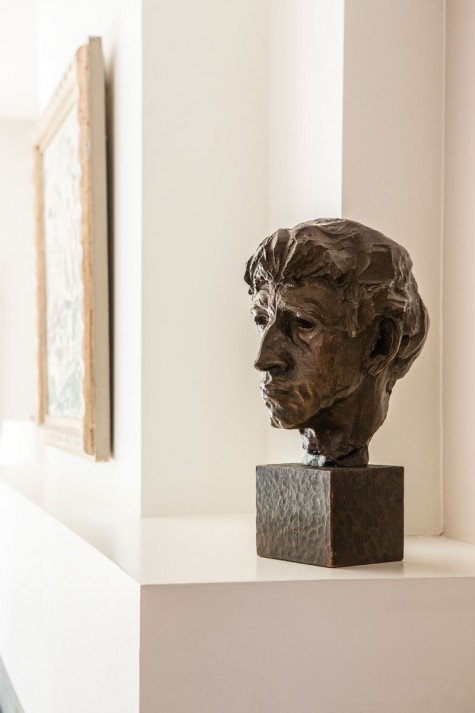 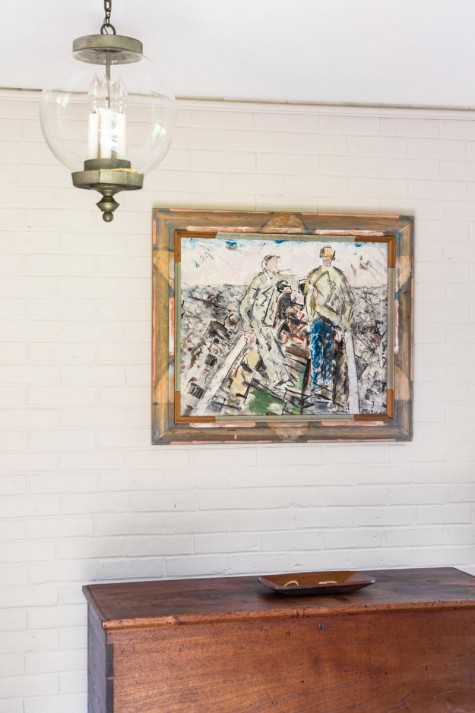 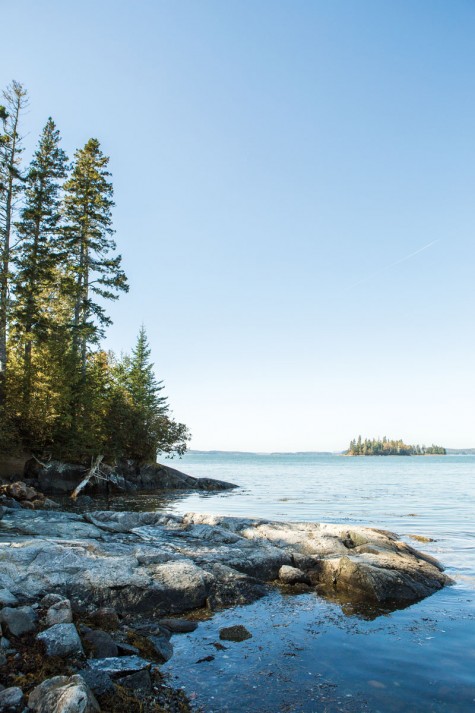 You can really understand Marin's modernism when you see the site. You see the cubism in the rocks formations.