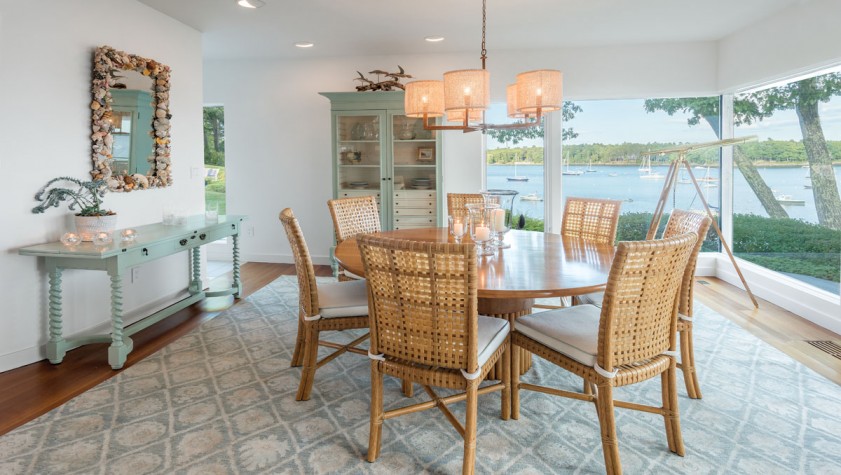 Interior designer Megan van der Kieft of Camden’s Margo Moore Interiors matched a dining room table that belonged to the owner’s mother with McGuire chairs, a Made Goods chandelier, and a hand-knotted, wool-silk carpet from Mougalian Rugs in Scarborough, creating a cottage feel. A driftwood sculpture by Bill Mayher and seashell-crusted mirror reference the waterfront site. 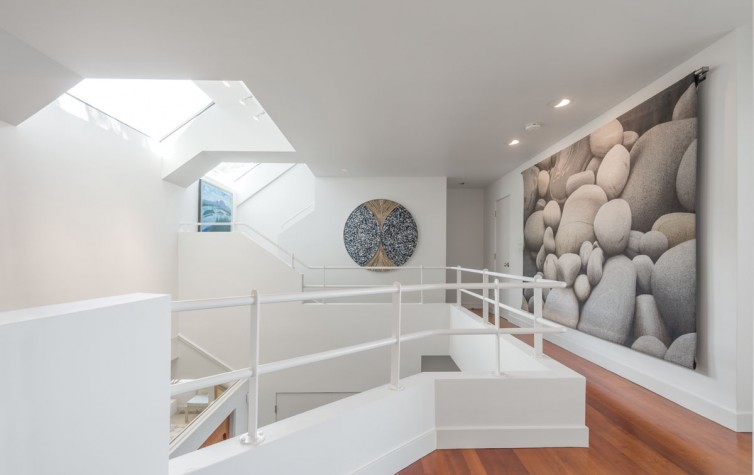 At the top of the main staircase, an Alan Magee tapestry and driftwood-and-mussel shell work by Michael Fleming reference the owner’s love of the Maine coast. 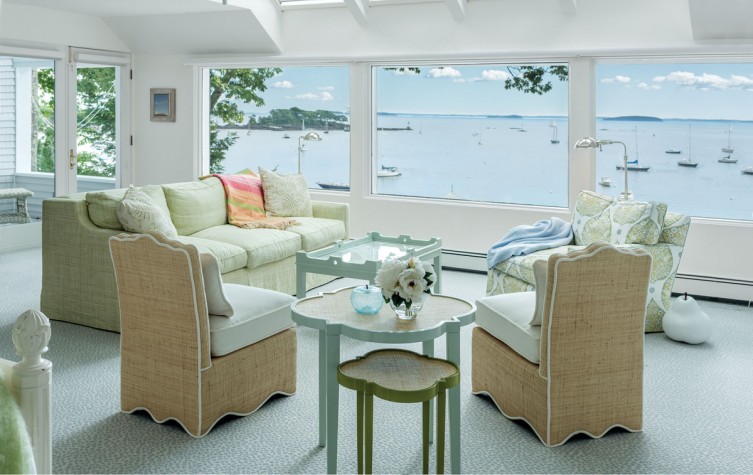 The serene owner’s suite is filled with comfortable, casual furniture in pastel colors from Margo Moore Interiors. The driftwood work at right is by Michael Fleming. 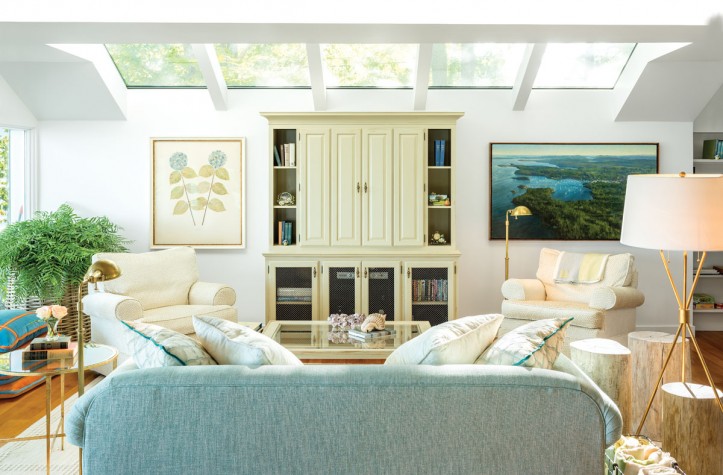 In the living room, works by Lauren LeChance and Alexandra Tyng flank an entertainment center designed by van der Kieft and built by Phi Home Designs in Rockport. 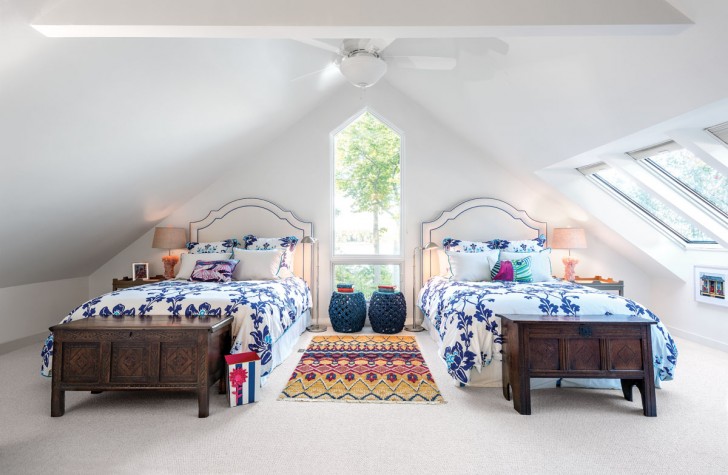 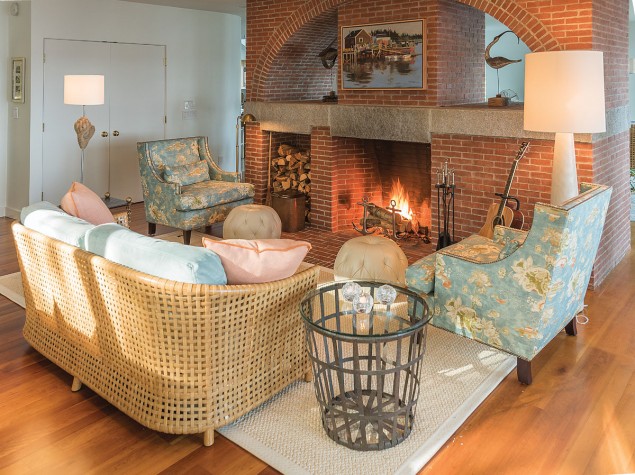 In the living room, a McGuire sofa and Cisco Brothers chairs create a cozy huddle. The painting over the fireplace is by Connie Hayes and the sculptures on either side are by Guy Taplin.

In the process of renovating a beloved family home, an owner learns what she loves

The first time the homeowner at the heart of this story stepped inside her mother’s Camden home, she marveled at it. “It was as beautiful a house as I had ever seen,” says the Maine-born Texan of the contemporary structure, which features dramatic angles and walls of glass rimmed with steel supports. But it wasn’t just the home’s beauty that made an impact; it was also what the place represented. The decision to buy the house was one of the first her mother had made entirely on her own, and it revealed a side of her the owner had never seen. “My mother was a quiet woman,” she explains. “She didn’t talk much about what she liked or didn’t. By choosing this place, she let on that this is what she loved—modern design.” When her mother passed away in 2010 and the owner inherited the house, she struggled with the idea of changing anything about it, despite the fact that the space did not feel like her own. She might still feel that way if it weren’t for designer Megan van der Kieft of Camden’s Margo Moore Interiors, who in 2013 helped the owner realize that it was possible to pay tribute to her mother while making her own mark on the home.

The house was designed by Camden architect Stephen Smith and built by Bruce Laukka of Rockport in 1987 for a Floridian who was used to abundant light. “He wanted an open plan with a lot of glass,” says Smith, who made the most of the 70-foot-wide waterfront site and its views of Curtis Island by wrapping the façade with windows. The original owner regularly entertained guests and wanted to offer them a sense of privacy during their stays, so Smith’s design is composed of three structures connected by glass walkways. The two-and-a-half- story main building includes the living and dining space, owner’s suite, and a children’s suite with living and sleeping quarters. A formal glass entryway doubles as the passageway to another guest suite, which is connected via a longer walkway to the garage, workout room, and a second-floor two-bedroom apartment.

The current owner loved the open, functional layout but found the furniture—a combination of Queen Anne- style and Shaker antiques—incongruous with the home’s modern architecture and a little too formal for her taste. That’s where van der Kieft came in. “Megan had lots of resources, was patient, and listened very well,” says the owner. “She understood that I had to start small.” Bit by bit, decision by decision, the owner discovered her own whimsical style. She worked with van der Kieft to replace the antiques with colorful, comfortable furniture, creating a modern cottage look that suits the light-filled space. They layered on warmth and texture with New Zealand wool carpets in the bedrooms and Cowtan and Tout and Phillip Jeffries wallpaper in the bathrooms. Driftwood lamps by Phippsburg artist Michael Fleming and mirrors and wall art made of or inspired by organic objects like shells and rocks reference the waterfront setting. The owner drew the line, however, when it came to addressing some of the home’s quirks. “Megan knows what’s right and proper, but there were times when I had to say, ‘well, that’s not really me,’” she says. For example, when van der Kieft discovered that the original cherry floorboards in the living room were warped to the point of being impossible to refinish, the owner opted to have them buffed instead of replaced, noting how much her daughter loves feeling the waves beneath her feet.

In 2013 van der Kieft brought Smith back to make plans for a renovation of the powder room in the entryway carried out by Rob Troxler of Phi Home Designs in Rockport. The updated design features a custom solid-maple vanity painted and distressed with wear-through and glaze, as well as vertically striped wallpaper and a mirror that runs the length of one wall, visually expanding the space. A year later, the owner decided to tackle the kitchen, which contained dark cherry cabinetry and dark green granite countertops, and once again van der Kieft enlisted the help of Troxler to execute her vision. They brightened up the space with white, windowed and solid cabinetry and pearl-colored, veined quartzite countertops, providing a sense of openness and expansiveness missing from the former kitchen.

Initially the owner found the task of adding to the home’s art collection to be a daunting one. Her mother had purchased abstract paintings by Joan Miró that hang along the staircase leading to the owner’s bedroom, as well as the dreamy, pixelated landscapes by Camille Pissarro in the owner’s bedroom. The owner appreciated these pieces because her mother loved them, but while working with van der Kieft, as well as Camden-based art consultant Heather Hearst and Portland’s Art Collector Maine, she found herself drawn to a decidedly different style. From the outset, she also was committed to buying works by Maine artists that depict local scenes. “I thought, Maine’s so beautiful, so wonderful, why would I want to look elsewhere?” she says.

“I grew up knowing Maine as a rural place where people work hard as farmers, loggers, and fishermen,” says the owner of her upbringing in a small inland town before her family moved to Texas. “We lived on a dirt road, where we played in snowbanks in the winter and made mud pies in the spring.” She has found that some of her favorite pieces of art reflect those childhood experiences. In the mudroom off the garage, graphic paintings of rain boots and buoys by Robin Swennes reference puddle stomping and the working waterfront. A painting by Jon Redmond in the laundry room, of a ladder propped up against an apple tree, reminds her of trees she and her sister and brother used to climb. And painter Alexandra Tyng’s dramatic perspective on Jordan Pond in the workout room and Eric Hopkins’s fanciful portrayal of sea and pines in an upstairs hallway conjure rare family visits to the shore. She laughs when she considers the placement of some of these paintings, saying, “I guess it makes sense because I like doing laundry. You don’t find me sitting too often.”

Back in Maine for the summers, in a house that feels as much like her own as her mother’s, the owner finds that history is repeating itself: her three adult children are now weighing in on the art. And she’s delighted to discover that their tastes depart from her own. Her eldest daughter chose Susan Van Campen’s watercolor of flowers that is hanging on the wall between the kitchen and dining room, and her youngest daughter selected the aqueous abstractions by Dudley Zopp displayed over the claw- foot tub in a guest bathroom. “I wouldn’t have chosen them myself, but they have an organic quality I have come to love,” says the owner. “I love the idea of my kids taking the collection one step further. If you want a house to go on for generations, you have to make it about the whole family.” 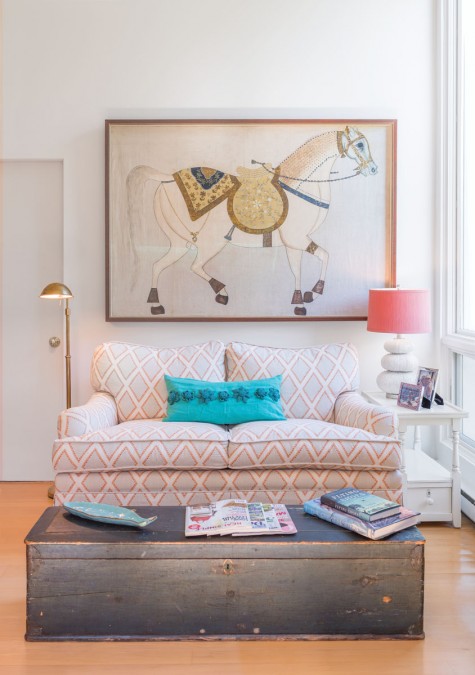 In the guest apartment over the garage, a colorful sitting room showcases the owner’s whimsical side with graphic fabrics and a fantastical illustration left by a previous owner and reframed by van der Kieft. 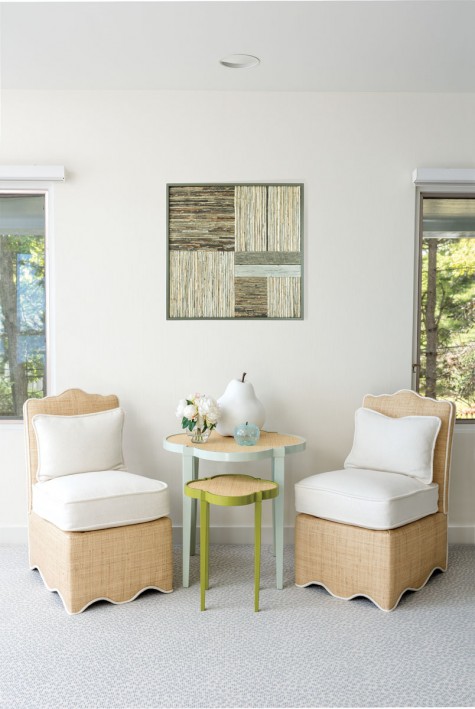 The serene owner’s suite is filled with comfortable, casual furniture in pastel colors from Margo Moore Interiors. The driftwood work is by Michael Fleming. 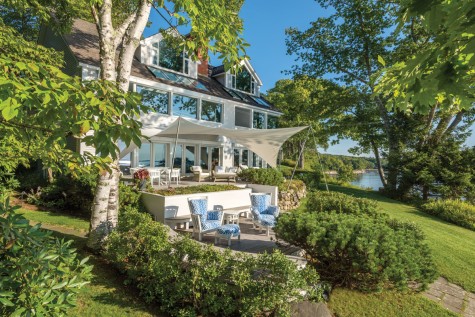 Dan Eaton of Landscape Services in Camden did all of the landscaping around the home and designed and built the driveway with Norumbega stone from Maine. He used the leftover stone to craft a fire pit where the family often gathers in the evenings. 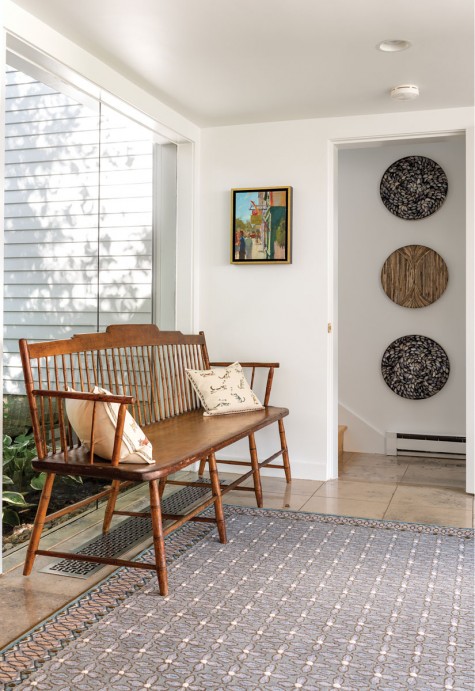 An antique Windsor bench in the hallway (opposite, bottom) belonged to the owner’s mother. Also pictured is a painting by Colin Page and a trio of works by Michael Fleming that incorporate stones and bamboo.