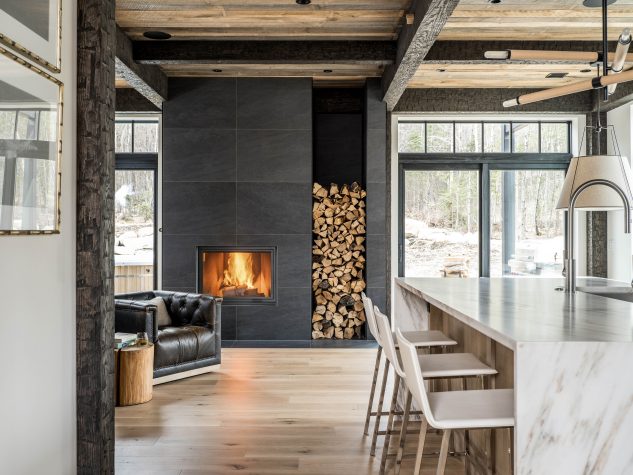 The Napoleon fireplace has a self-ventilating system that homeowner Erica Palm appreciates for its flexibility. “The glass goes up behind the tile,” she says. “You can have glass, a screen, or nothing at all.” 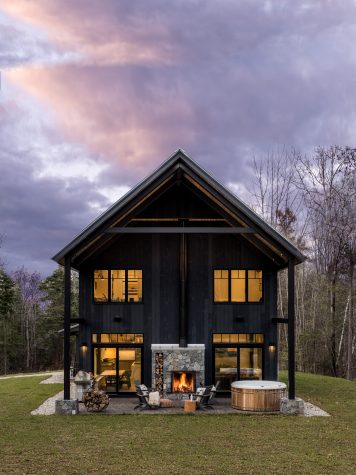 Western Maine Steel in West Paris fabricated, painted, and brought the steel structure to the site for installation. “They’re about 15 feet,” say Eric List, the designer and builder. “They had a hard time getting them under the powerline from the road.” 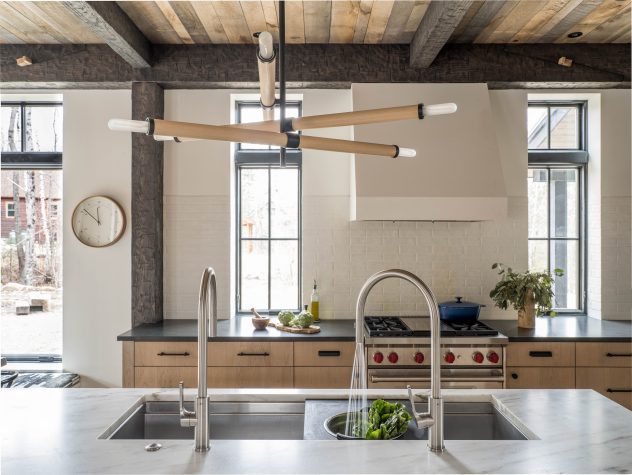 In the kitchen, a wood stick pendant light with black metal details by Troy Lighting hangs over the five-foot-long stainless-steel workstation sink by the Galley. To keep costs down, the Palms went with a painted wooden range hood rather than a pricier plaster finish. 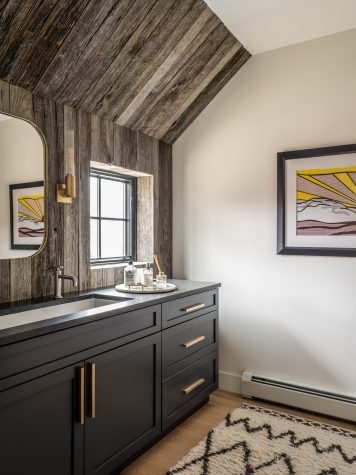 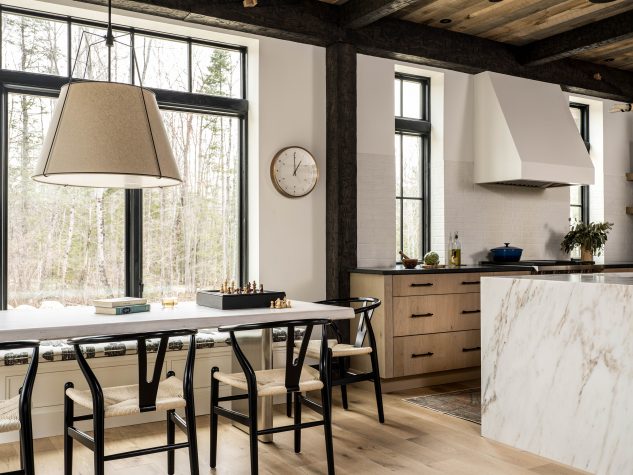 A conical pendant from Rejuvenation measures 30 inches in diameter and adds interest (and light!) over the dining table. 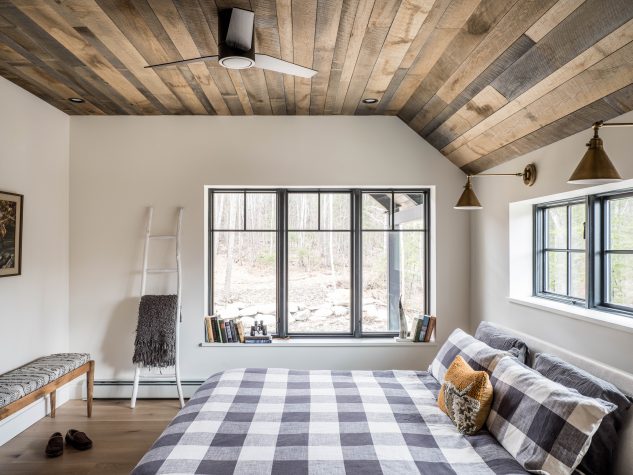 Sconces by Hudson Valley Lighting mounted above the window keep clutter to a minimum in the primary bedroom. 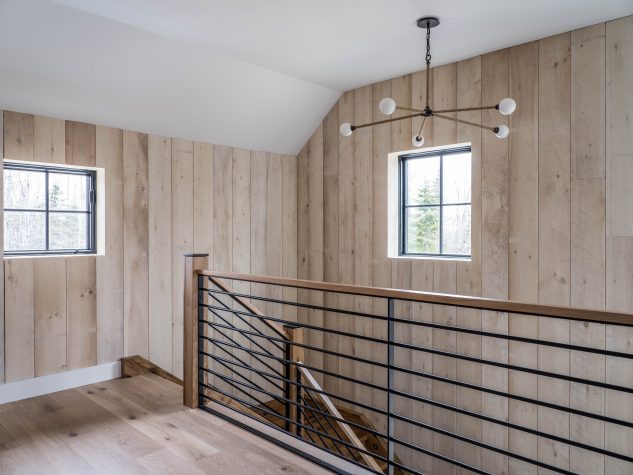 On the second-floor landing, the laundry hides behind a sliding barn door opposite the stair, while a rope-wrapped chandelier by Troy Lighting adds texture above. 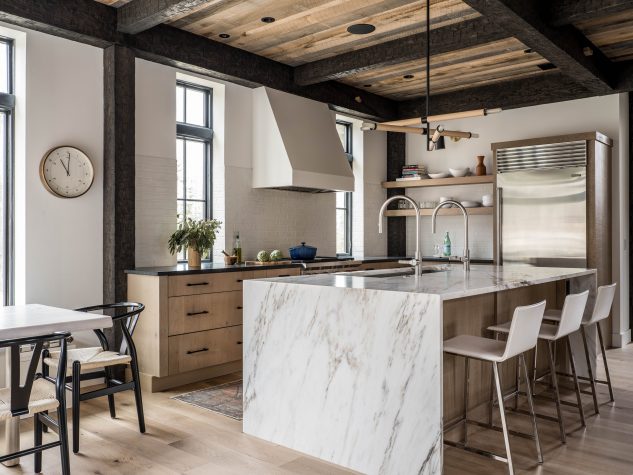 In the kitchen, the team matched the cabinetry finish to the floorboards. “Cabinetry that contrasts the floor has been popular for the past two decades; as more people use wood, a monochromatic approach has become more common,” Erica says. 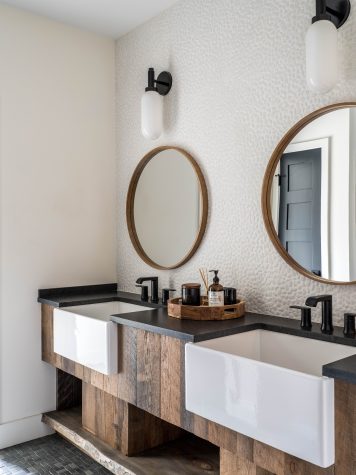 The primary bathroom features two trough sinks in a rustic wood stand and a pebbled backsplash that reaches to the ceiling; interior doors (you can glimpse one in the mirror) are painted black.

On winter weekends, Erica and Randall Palm rise in time to take the day’s first lift up Mount Abram. After a few runs, the couple return home to make breakfast for their three sons and, often, Erica’s mom and her brother’s family, who join them from western Massachusetts. The kids and in and out all day, grabbing lunch at the lodge or a cup of chili from the Crockpot. By late afternoon, the outdoor fireplace is lit and the hot tub is bubbling. “Plus, there’s always a kid trying to chop wood like a lumberjack,” Erica adds.

The Palms, who live on Massachusetts’s North Shore, recently built a ski-in, ski-out mountainside home in Greenwood, where the boys and their cousins can come and go as they please. “We loved our old cabin near Sunday River, but as our kids got older, they wanted more independence,” Erica says, alluding to the car trip required to get to the mountain. “Here, there is a groomed access trail to the West Lodge from our yard.” Erica, an interior designer, worked with Eric List of Winterhaven Custom Builders to design and build her family’s energy-efficient home. “I gave Eric an inspiration photo of a barn-style home with a huge overhang on one end supported by steel beams and an outdoor fireplace,” Erica says. “It’s a two-story, 28- by 44-foot rectangle with a crazy 14-foot-deep overhang.”

Although gas fireplaces would have increased efficiency, the family had their hearts set on the ambiance of burning wood in the Maine mountains. An enormous stone-wrapped fireplace on the back porch, sheltered by the aforementioned overhanging eaves, is the centerpiece around which the family comes together. A giant steel structure supports the overhang, creating a modern timber-frame effect. Gray-stained white pine planks line the underside of the overhang, complementing the black-stained vertical shiplap siding. “The other houses on the road have a natural wood finish,” Erica says. “We didn’t want to blend in, so we went with black.”

Elements of Maine vernacular architecture appear both outside and inside. Hand-sculpted white oak posts and beams run through the first-floor living space, accenting the wood-plank ceiling and soft white walls. The purposely imperfect hollow timbers look like they’re holding up the house, but really they’re just for show. “The mill worker [Mark Lagoda] hammered away to make them look as old as the mountain,” Erica says. “The beams do a lot of the talking, making the house feel warm, welcoming, and full of character.”

The neutral palette intentionally deviates from the yellowed pine tongue-and-groove interior of the family’s prior cabin. “The other house was cozy and all the rest, but we were done with that look,” Erica says. While she had enlivened the Sunday River home with turquoise-colored accents, here the color comes only from the landscape. “The goal was to stay 100 percent neutral and use all-natural materials to make it feel cozy,” she says. “There was a lot of discussion about how much wood and where to put it.”

A variety of local lumber contrasts with the hand-distressed oak posts and beams. The ceiling’s air-dried oak planks infuse warmth into the ten-foot-tall space. The planks are so authentically water-stained and weathered that, upon seeing them, Erica’s mom thought there had been a leak on the second floor. Sliding barn doors made from reclaimed pine provide visual interest upstairs and down, and whitewashed, rough-sawn pine shiplap is the backdrop for the custom U-shaped staircase.

List collaborated with woodworker Robie Wentworth on the reclaimed, resawn oak open staircase with wood and steel railings. “The stairs greatly influenced how the combination of dark and light elements played out in the rest of the house,” Erica says. The designer delights in the design and craftsmanship. She details the rhythm: four thick treads, then nine, then another four, then points to the hand-hammered steel caps on the newels. “The carpenter made every one of those dents,” she says.

At the other end of the house, a floor-to-ceiling fireplace anchors the living space. It’s also the first thing you see as you turn the corner from the mudroom-style main entry. The vertical log storage niche is not just a striking focal point; it’s practical. “In the old house, we never had enough wood, and what we did have was always in the way,” Erica says, noting the challenge of storing logs in an open floor plan. “You can fill this as high as you can reach, and the room stays clean.” Large-format porcelain tiles that resemble crisply cut slate slabs face the chimney and compose the hearth that is flush with the floor.

To keep the circulation route to the sliders on either side of the fireplace clear, Erica pushed the dining table close to a side wall, where a built-in banquette comes up to the sill of the large window. A pendant light with an oversized conical shade drops down over the whitewashed live-edge tabletop. “I got lucky; it’s just the right finish and length,” Erica says of the CB2 find. Puzzles and poker happen here, while the sectional opposite is where the family lounges and watches TV.

Adjacent to the dining table, an expansive island with a local marble waterfall countertop allows multiple cooks to make meals. The piece boasts an industrial-size sink with dual gooseneck faucets on one side and accommodates four stools on the other. Clean-lined base cabinets constructed of textured European oak with a matte finish hug two walls. “The slab profile is modern, but the rustic material has authentic mountain appeal,” Erica says.

On the range wall, tall, skinny windows descend to the dark, honed stone countertops. The designer points to how the mitered backsplash tiles at the windows highlight the nine-inch wall depth that resulted from the double framing. As for how the kitchen functions, Erica says that, like the rest of the home, it has just what it needs.

The same is true for the sleeping arrangements. Erica’s mom is no longer relegated to a basement, nor the cousins to sleeping bags on the floor beside her; there’s a bed for everyone here. Not only does the house provide the utility the family needs; it makes them feel good. The backyard amenities and the airy interior spaces with extra-large windows provide a gratifying indoor–outdoor experience and a sense of community. “The landscape is beautiful, we can wave to skiers all day, and at night the kids get the groomers to flash their lights,” Erica says. “The house captures everything I was looking for.” 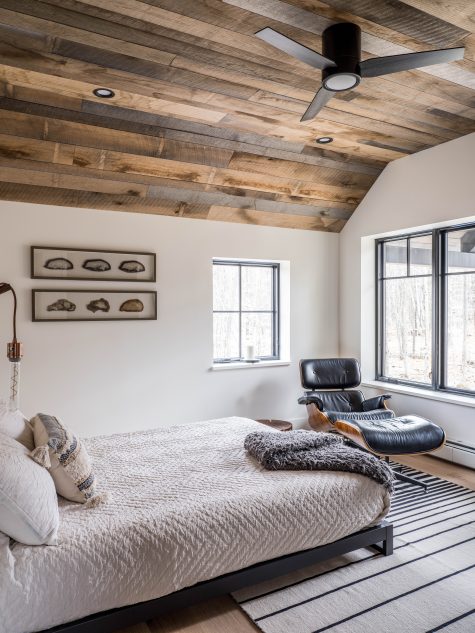 The second-floor guest bedroom, like the other bedrooms, has an angled wood ceiling that the team brought down for scale. “We could have taken the ceilings to the peak, but it can feel disproportionate in smaller rooms,” Erica says. 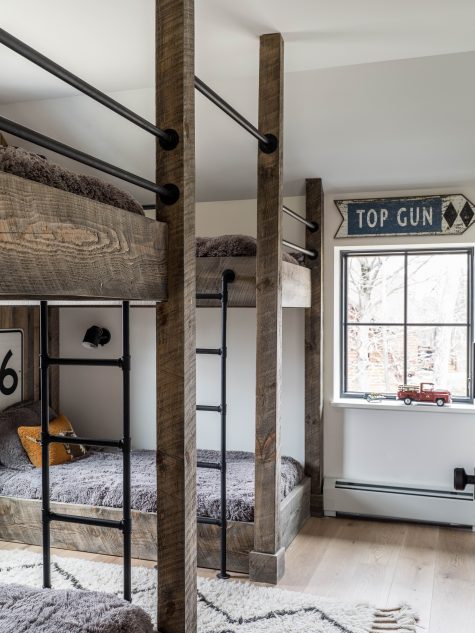 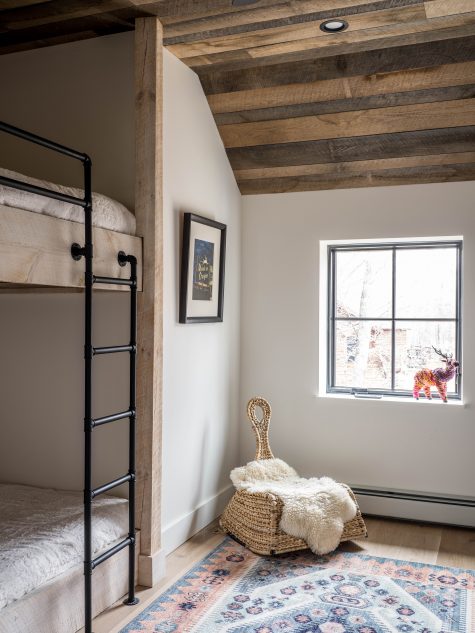 The bedroom where the Palms’ nieces sleep has a single bunk with the same style of powder-coated custom ladder as the boys’ bunk room. 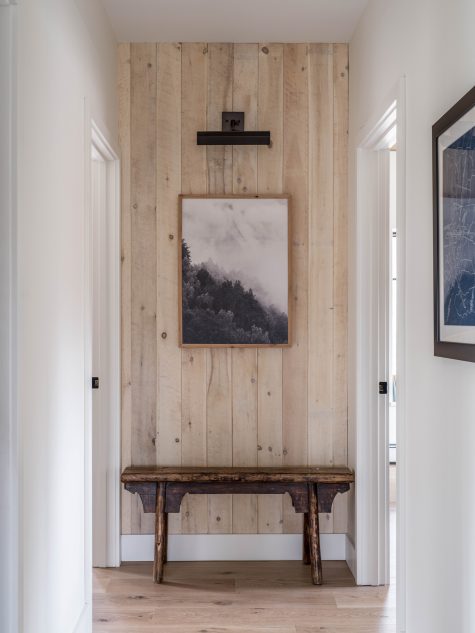