A School Grows in Saco

Three architecture firms come together to collaborate on the Ecology School’s new home, which aims to be the first Living Building Challenge–certified structure in Maine 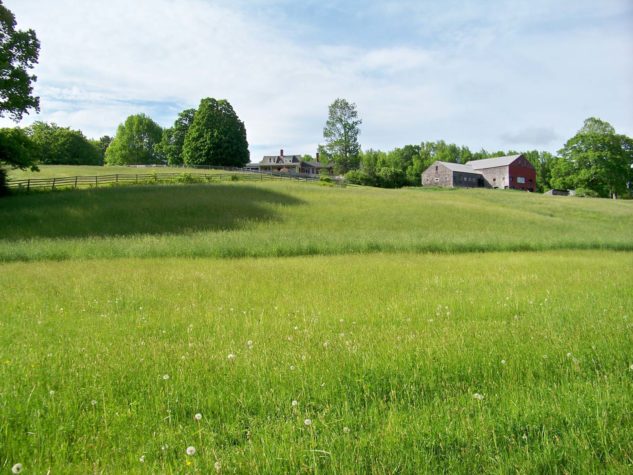 This 100-plus-acre property in Saco will soon be home to the Ecology School, an innovative institution that teaches kids about the natural environment. PC: Richardson & Associates 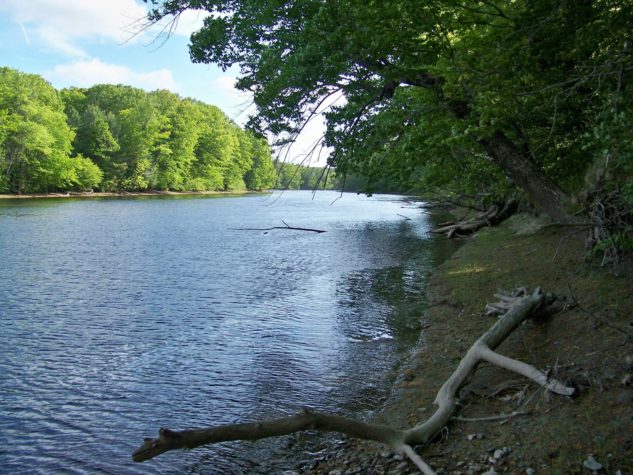 At the Ecology School, all of the classrooms are located outdoors. Students will learn on the banks of the Saco River, in the grassy meadows, in the woods, and in the many edges and hedges that border the property. PC: Richardson & Associates 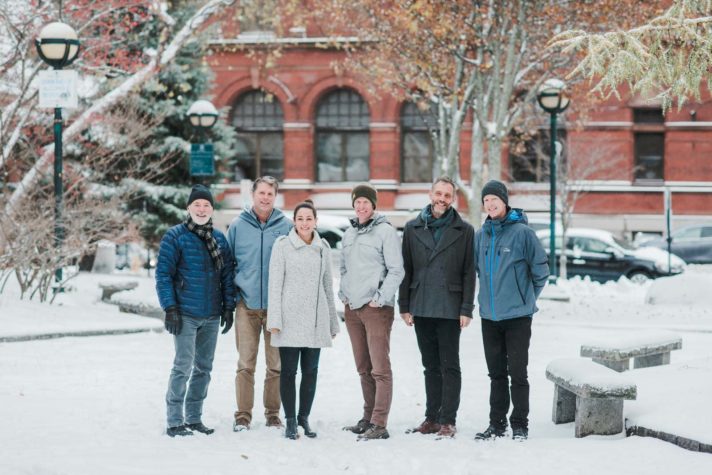 Drew Dumsch couldn’t settle on a single architect, so he chose to bring in a superstar team of green designers (from left to right: Scott Simons, Todd Richardson, Danielle Foisy, Jesse Thompson, Ryan Kanteres, and Chris Briley) from around Maine. PC: Christina Wnek 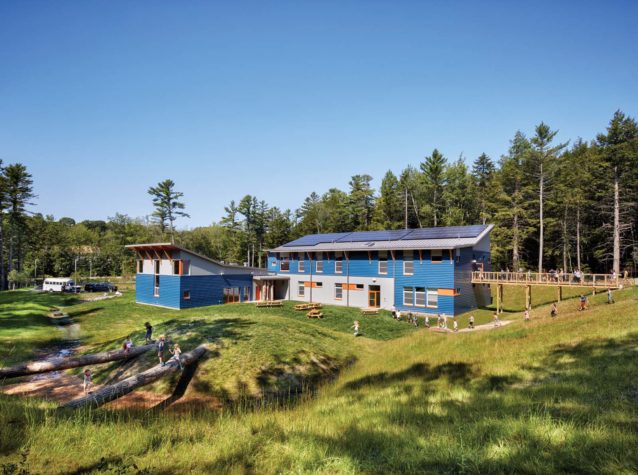 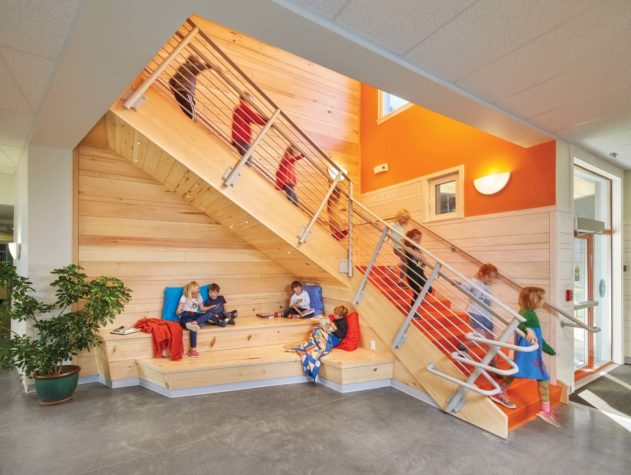 Kaplan Thompson Architects received a special recognition award for this staircase (opposite, bottom), which was constructed from 24-long, 12-inch wide boards harvested from the site. PC: David Kurtis 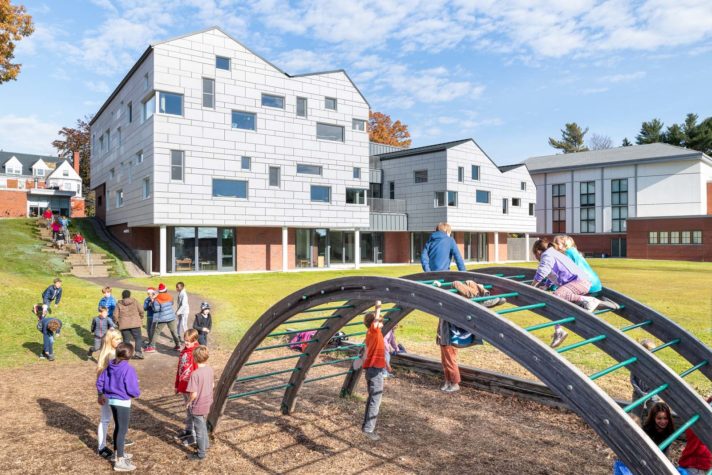 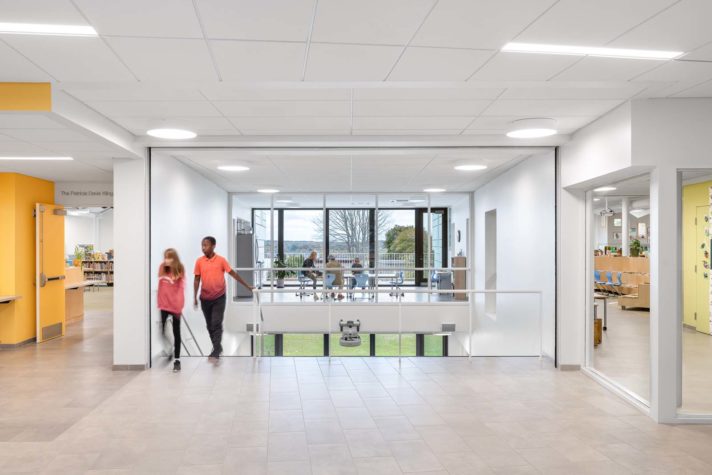 The Waynflete addition cost $10 million, but the school should make that money back in energy savings over the next decade. PC: Ryan Bent 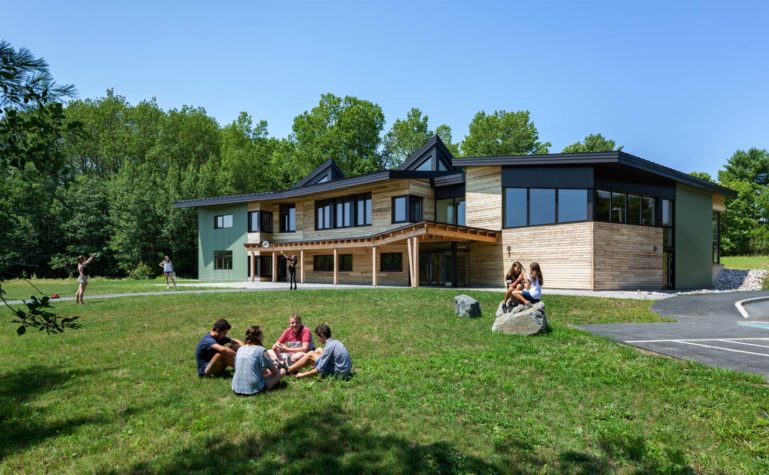 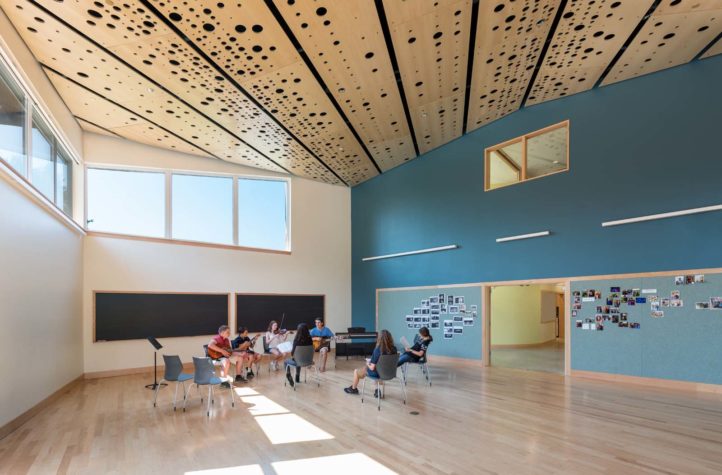 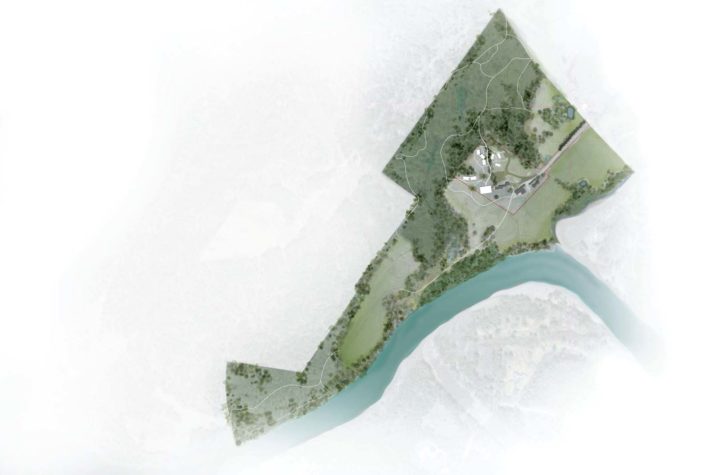 A site plan shows where the key buildings will be located for the new Ecology School. It was important for both the architects and the school’s founders that the natural landscape be preserved as much as possible. 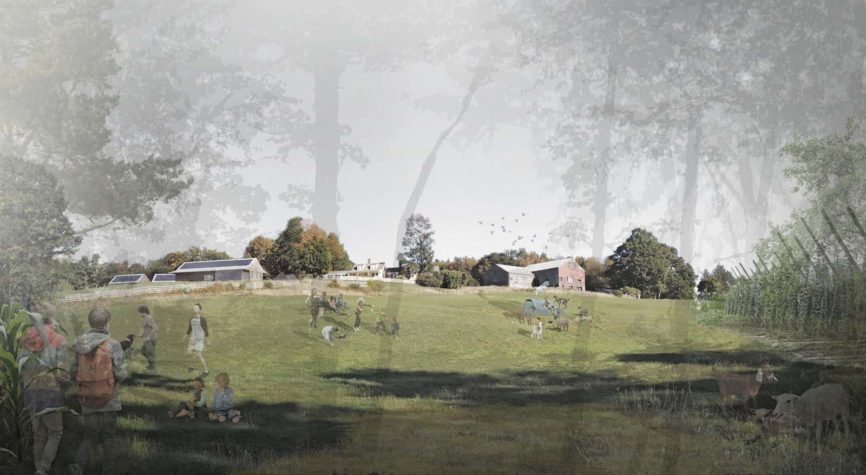 Soon, this quiet river bend farm will see new life, as students come to campus to learn about the trees, crops, livestock, and wildlife of Maine.

From the patio of the old farmhouse, you can see the Saco River gleaming like mercury beneath a gray October sky, snaking through the maples and oaks, a graceful curve of water flowing ceaselessly toward the Atlantic.

The house was built in 1794, high on a south-faing hill. It was once a family home, where people were born and died, where they raised children and horses and sheep. (Some of these early Americans are buried on the property in an intimate private cemetery, including the wife of the first owner, who passed away just four years after the home was built.) The farmhouse has seen a lot of life, and soon it will see even more. Soon this 100-plus-acre property will become grounds, classrooms, dormitories, and dining facilities for the Ecology School. Soon it will be teaming with life, learning, and growth.

Well, that’s not quite right. It’s already a place filled with life. Drew Dumsch, president and CEO of the Ecology School, says he’s seen deer and bobcats, heard coyotes, and spotted hawks circling above. “It’s spectacular, isn’t it?” he says as we walk around the muddy fields. Plastic tape has been laid down in big squares and rectangles, delineating where the new dining hall will be built, where the dormitories will sit. It’s going to be a big construction project, made even more complicated by Dumsch’s desire to adhere to the rigorous standards of the Living Building Challenge. Oh, and instead of hiring a single architecture firm to tackle this project, Dumsch has brought in three firms, plus a landscape architect. “We started working on the project back in May 2015,” he remembers, “right when River Bend Farm came on the market. Around that time, we interviewed these three firms, and well, we couldn’t decide. We loved them all.”

And so Dumsch decided to hire them all. The Living Building Challenge is aptly named. It’s an extremely difficult standard to fulfill, and only a few other projects in New England have achieved this certification. Why not bring in all the best architectural brains in Maine to work on our state’s first entry?

The consortium of designers and architects includes Scott Simons and Ryan Kanteres of Scott Simons Architects, Jesse Thompson of Kaplan Thompson Architects, Chris Briley of Briburn, and Todd Richardson of Richardson and Associates. When needed, they also called upon the expertise of various members of their respective firms including Danielle Foisy of Kaplan Thompson Architects, who has been responsible for managing the Living Building Challenge process. In order to avoid a too-many-cooks-in-the-kitchen scenario, Thompson took on the role of “overall management,” though, multiple members of the team have explained, “he was really herding cats.” Scott Simons and Ryan Kanteres took the lead designing the dining commons, while Chris Briley took the lead designing the dormitory. In addition to these new structures, they will also be using the existing buildings, including the huge old cedar-shingled barn (for livestock and classroom space) and the sprawling farmhouse (for administrative purposes).

Each of the architects have worked on schools before, and all of the parties involved, including the builders (Zachau Construction of Freeport), are experienced in green building practices. The Friends School of Portland, designed by Kaplan Thompson Architects, became the first middle school in Maine to receive Passive House certification (at the time, this was the highest voluntary energy-efficiencystandard in the world). That contemporary building is net-zero and features over 100 solar panels on the roof. The building has a tight envelope with 36-inch- thick walls, insulated ceilings, and an insulated foundation. Situated as close to the road as possible, the Friends School preserves its 25 wooded acres for student exploration. It’s also beautiful: in June 2016 Kaplan Thompson Architects received a special recognition award from AIA Maine for its incredible staircase, constructed of 24-foot-long, 12-inch-wide boards that were harvested from the site.

Soon after, another school entered the process of obtaining Passive House certification. In 2016 Scott Simons Architects designed an addition to the 140-year-old building that houses Waynflete School in Portland, nearly doubling the available learning space. The $10 million construction was more expensive than pursuing a LEED-certified addition, according to Mainebiz, but the school should make that money back in energy-efficiency savings within a decade. A skillful mix of historic New England–style and playful, contemporary design, the Waynflete building is flooded with natural light. Scott Simons Architects also worked on the Waynflete School Arts Center back in 2003, which received an AIA Honorable Mention award and LEED Silver certification.

Briburn, too, has gone through the process of getting a school ready for Passive House certification. The Maine Coast Waldorf High School tucked into the forests of Freeport was the first high school to receive Passive House certification in Maine. The building was the winner of the PHIUS Passive House Projects Competition in 2018 (commercial category). The school exceeded the goal for net-zero energy demand, thanks to its south-facing windows, robust building envelope, triple-glazed windows and exterior doors, and daylight controls and shading.

But, even though every member of the team is versed in green building and educational design, the Living Building Challenge is still “the epitome of sustainable design,” explains Kanteres. Briley agrees. “It is the most stringent and hardest-to-meet certification out there,” he says. “Passive House is all about energy, but the Living Building Challenge is about everything that has to do with sustainability. They liken it to a flower. A flower sits in a field, takes no more than it needs, and gives back everything it takes. It’s part of the ecosystem, and that is beautiful.”

In keeping with the floral metaphor, the Living Building Challenge features seven performance areas known as “petals.” The categories include place, water, energy, health and happiness, materials, equity, and beauty. Each category is quite complicated. (For instance, the “place” petal standards clearly articulate where one can build: how far from dunes, virgin prairie, old-growth forest, and so on. It also encourages the “creation of communities that are once again based on the pedestrian rather than the automobile” as well as a number of other land-centric ideals.) It may seem a tall order to ask that a building promote equality, or that a building help its residents and guests become healthier and happier, but architecture does have a huge influence on our lives. We spend most of our time within buildings, after all. Why not make them beautiful, accessible, and built to promote interaction with the outside world?

While I might have guessed that materials would be the simplest “petal” standard to meet, it turns out it’s a rather tricky one. To be certified in that petal, you have to disclose everything in your building. “This sounds easy,” says Briley, “It’s not. Let’s say you buy a door at Home Depot. You’re not just buying that door. You’re also buying gaskets, glue binders, paint coating, lubricants, and metals that each have their own coatings. And you have to divulge where everything came from, be it animal, vegetable, or mineral. And you have to answer: Is it toxic?” In order to meet the Living Building Challenge, the Ecology School can’t contain any PVC. But PVC is in everything; right now, I’m typing this on a computer that contains PVC, and when I was taking notes during an interview earlier today, I was writing with a pencil that contains PVC. It’s in plumbing and wires. We all know, on some level, that we live our lives surrounded by toxic substances. But something interesting happens when you’re forced to truly confront this fact, as these architects have. “We realized that the building isn’t just about being healthy for the students and kids. It has to be healthy for the people making each part in the factories, for all the people who handle each piece,” says Thompson. “Our client is trying to change kids’ lives,” he continues. “A lot of these kids have never eaten food directly from a garden, or been outside at night to look at the stars.” Thompson knows that it “might be impossible” to design to the standards of the Living Building Challenge. But that’s the point. “This is very explicitly about being a change agent. They made the standards semi-impossible on purpose. They’re trying to change us.”

The Ecology School has already been changing students’ lives for 20 years, but this new property will allow them to welcome in more students. There will be eight outdoor classrooms, fields where livestock can graze, permaculture gardens surrounding the dorms, and trails into the woods where students can learn about the flora and fauna of Maine. Even though Thompson calls the collaboration of these three firms “half-crazy,” all of the architects and designers involved knew it was the right thing to do. “The first thing we did was sit down and eat a big slice of humble pie with each other,” jokes Briley. They had to set aside their various egos and work together toward creating a place that would push industry standards and set a new bar for local buildings.

Simons also notes that, by creating a database of nontoxic building materials, they’re making it easier to build future projects (even those not seeking this certification) that are healthier. “The more projects get done, the more projects can get done,” he says.

Although they have yet to break ground, it is possible to see a glimmer of the school’s possible impact when you walk the property. Standing on the patio, overlooking the Saco River, I realize I’ve tapped into something that all the architects knew instinctively. When it came to tying the buildings to the site, they all started with the common building and its soon-to-be-built porch, which will look out at almost the same view as the one attached to the old farmhouse. “It was obvious from the start,” says Simons. “Imagine sitting on the porch, looking out at the water, feeling the sun hit your face and the breeze coming up the valley. It was a no-brainer. We were drawing that porch since day one.” And someday, in the not-too-distant future, students will start occupying this land, ready to learn, ready to grow.