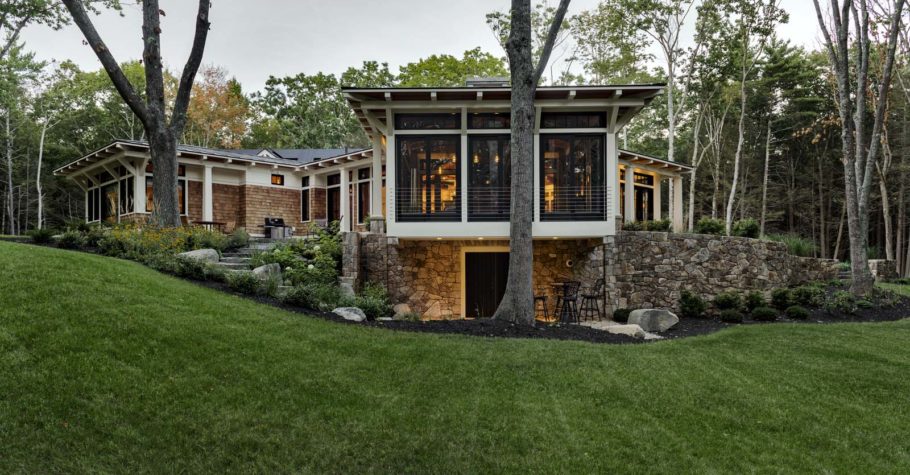 Designed for energy efficiency, Jim and Carla Spencer’s York home features deep roof overhangs, a modest footprint, and a shallow roof and was constructed with reclaimed timbers over a steel frame. Solar and geothermal systems produce most of the home’s energy. 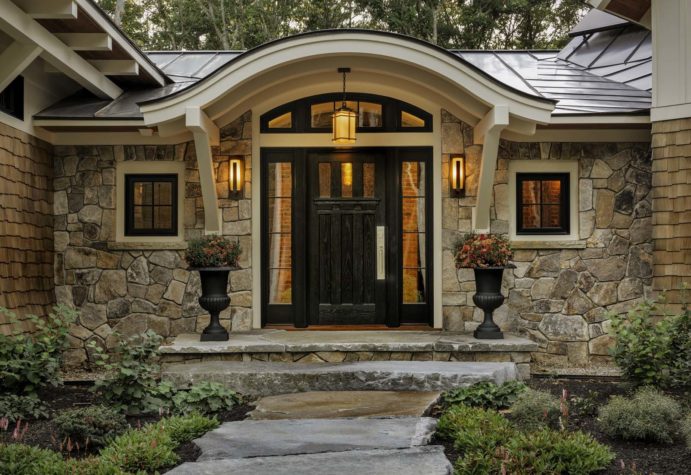 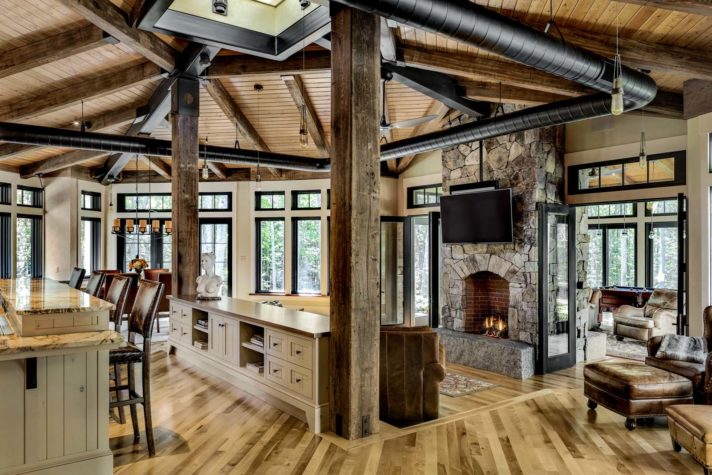 In the home’s main living space, back-to-back fireplaces flanked by French doors divide the sunroom from the kitchen and dining area. A central cupola brings in natural light; its windows can be opened by remote control to provide ventilation. 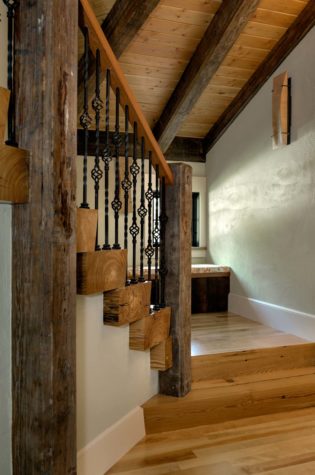 To create a unique stairway to the guest quarters, architect Scott Fiorentino and builder Tom Howarth configured a stack of 8-by- 12 beams. Homeowner Carla Spencer selected ready-made steel balusters to contrast with the surrounding timbers. 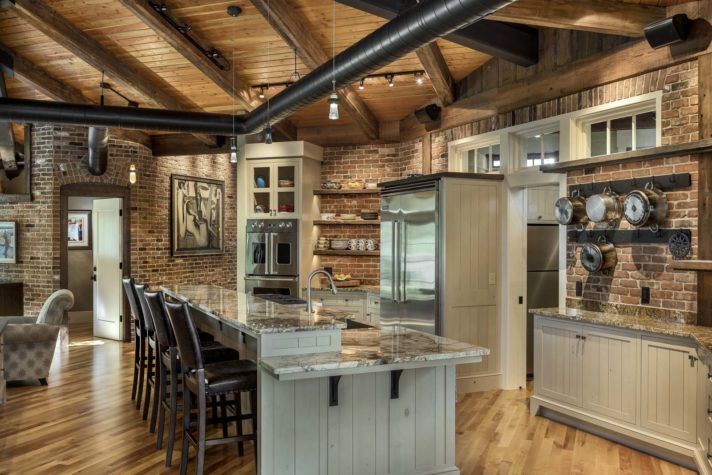 A two-tiered island covered in Copenhagen granite anchors the kitchen and gives a view over the main living area. Open racks for dishes and cookware suit the homeowners’ preference for functional design. 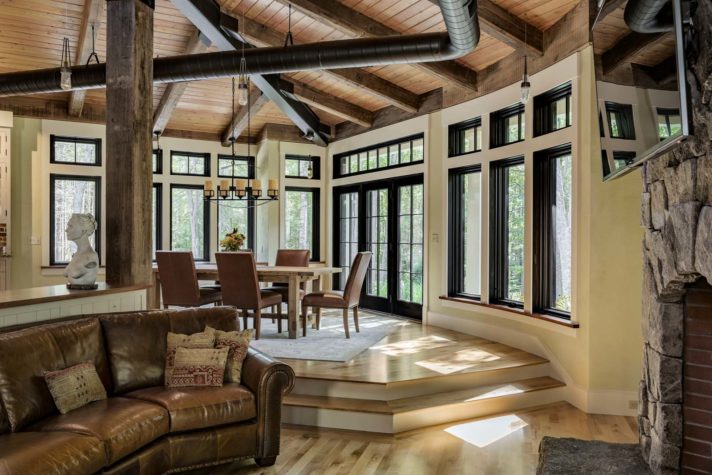 Two steps lead down to the sitting area, creating a sense of space under the shallow roof. The stone bust behind the couch is one of many works in and around the home by Antoinette Schultze, homeowner Carla Spencer’s mother. 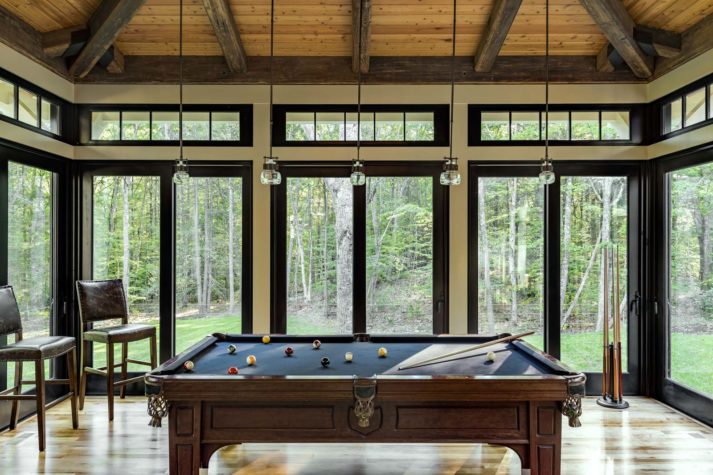 The sunroom features a pool table and forest views. The windows can be opened in summer; cable rails outside keep the view open.

The home was sited at the top of a ledge to take advantage of sunlight and avoid wetland areas. Landscape architect Terrence Parker designed a stone patio and stone walls to create a gentle transition between the home and the landscape.

When I arrive at Jim and Carla The Spencers began the project with a Spencer’s home in York, the first thing I see is a turkey, watching my car from the woods that border the circular driveway. Next I notice a green form rising amid ferns, trees, and boulders in the center of the drive: a sculpture, graceful but solid, that suggests two figures kissing. Behind the sculpture is the home itself, a low, welcoming structure that seems to embrace its visitors. It’s on my second look that I notice all the architectural drama: the custom front door under an eyebrow portico, the whimsical flares of the roofs and walls, the lively interplay of stone, wood, glass, and metal. It’s a home that seems to murmur with friendly conversations: bricks and timber and steel, woods and windows, art and nature, all getting to know one another.

The Spencers began the project with a list of priorities that included energy conservation, single-floor living, and views of the landscape. They also wanted to recreate an interior look they’d noticed in some favorite local restaurants, a warm combination of exposed structures and elegant styling that architect Scott Fiorentino calls “rustic industrial.” Working with builder Tom Howarth and landscape designer Terrence Parker of Terra Firma Landscape Architecture, Fiorentino created a riff on a Craftsman-style bungalow, with deep roof overhangs and a cupola vent for natural cooling, a modest footprint and low roof for reduced energy use, and an open-plan living area designed for easy entertaining. Throughout the home, beams reclaimed from a 130-year-old mill provide structural support; the heart pine timbers are stronger than their modern equivalent and add warmth and character.

“Just about everybody is surprised by what’s inside,” says Carla. “They don’t expect industrial.” “Industrial” doesn’t entirely cover the interior’s cozy mix of textures, but it does suggest the homeowners’ aesthetic emphasis on how the work gets done. “We wanted the design to be pure,” says Fiorentino. “We respected the materials. A timber’s a timber, a piece of steel’s a piece of steel.” “Jim and I both are very functional people,” says Carla, gesturing around the kitchen, where brick-veneer walls showcase hanging pots and pans, and reclaimed shelves hold a bright collection of fruit-patterned dishware, a wedding gift from Carla’s parents. “I like things beautiful, but they have to function. If it’s beautiful but not easy to use, I’m not interested. I want things out there so I can just grab them.”

The kitchen design continues into a butler’s pantry with a second refrigerator and lots of prep space. The Spencers own the Golden Harvest produce store and Carl’s Meat Market in Kittery, and their counters are often piled with beautiful fruits and vegetables. Fiorentino installed transom windows and a sliding glass door to ensure plenty of natural light in order to make the food part of the kitchen decor. The kitchen’s focal point is a two-tiered island that holds the sink and range on one side and bar seating for four on the other. It’s covered in Copenhagen granite with dramatic veins of sparkling gray and rust, which pick up the warm tones of the brick and the wooden floors and ceiling.

A cook standing at the range—Fiorentino calls it “command central”—has a view over the main living space, which is configured for comfort and entertaining. To the left is the dining area with a table that can seat up to 14. In front of the kitchen, two steps lead down to a fireplace and seating area below the cupola. The level change creates a feeling of spaciousness under the shallow roof, as well as improving the sight lines to the sunroom at the end of the house and the woodland beyond it. The double-sided fireplace, burning wood on one side and gas on the other, is set in a floor-to-ceiling chimney of gray stone that divides the seating area from the sunroom.

French doors on either side of the fireplace can close off the sunroom to conserve heat, or open to allow circulation of both air and people (as well as access to the pool table). The sunroom may be the home’s most striking element. Cantilevered out from the main house and wrapped in windows, it extends the living space toward the outdoors. “It feels like a treehouse,” Fiorentino says—especially when the glass panels are open. (Cable rails keep the view clear while ensuring that the Spencers’ young grandson stays safely in the “tree.”)

The home is sited on 18 acres of woods and wetlands close enough to the ocean to get sea breezes and far enough from busy streets for frequent visits from deer, foxes, and birds (this explains the turkey). In order to avoid the site’s wetland areas and to take advantage of natural sunlight, the home was built on ledge, with no basement (except a small utility area on the north side). The home produces most of its own energy with geothermal and solar systems; slab-on-grade floors incorporate radiant heating and, quite unusually, cooling as well. The standing-seam metal roof covers 8.25-inch structural insulated panels, and thick exterior walls increase the home’s thermal resistance while adding visually appealing depth to frames and windows. Simply trimmed in black, the windows frame views of the landscape, which features native plants grouped around several elegant works in stone by sculptor Antoinette Schultze, Carla’s mother.

Terrence Parker used stone walls and gentle, rolling grade changes to transition from the refined details of the home to the surrounding woods. “I was trying to be quiet,” he says. “Nothing fancy—no big swaths of plants. It’s an exceptional home, and I was trying to do it justice.” Several mature trees on the property provide focal points, and Parker surrounded them with native woodland species “to reinforce the idea they were always there” while adding “variety in leaf shape and flower.” In lieu of a conventional lawn, Parker planted a sheep fescue mix that doesn’t need frequent mowing and tends to form aesthetically interesting clumps. The plantings work together “to create a green swath that moves from the dark forest up to the entry threshold of the house.” A stone patio is a sunny retreat in summer, and a fire pit looks as though it might be made of a convenient group of outcroppings. (It isn’t: Salmon Falls Nursery and Landscaping created the natural look.)

Within the sylvan landscape Schultze’s sculptures bring a human touch, and their organic but clearly artful forms create still moments among the rustling branches and leaves. With much of the house seeming to be built more of windows than of walls, the outdoors becomes its main decor: a changing painting of leaf, stone, and wood. There’s also plenty of human-made art, from the stone work dotting the grounds to sculptural furnishings, and I find myself stopping in hallways and corners to take in the fascinating collection of paintings. “I love the human form—it’s so expressive,” Carla tells me. But in this home it’s clear that other forms are expressive, too. If you stop to look and listen, you can start to understand the language of materials and shapes, gathering together to create new stories of home. 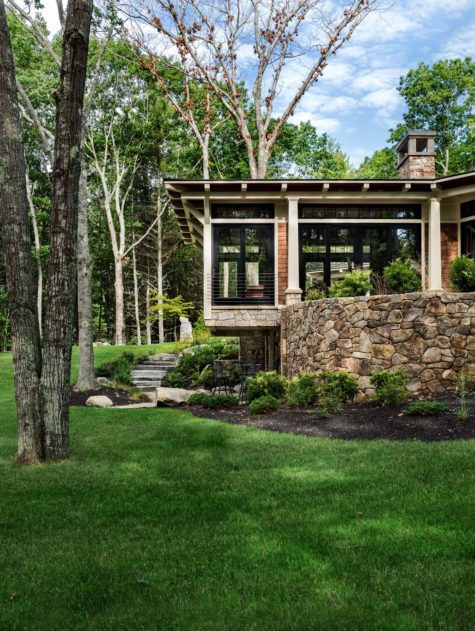 A glass-walled sunroom is cantilevered out from the house, evoking a tree house. The home was designed to preserve the property’s mature trees. 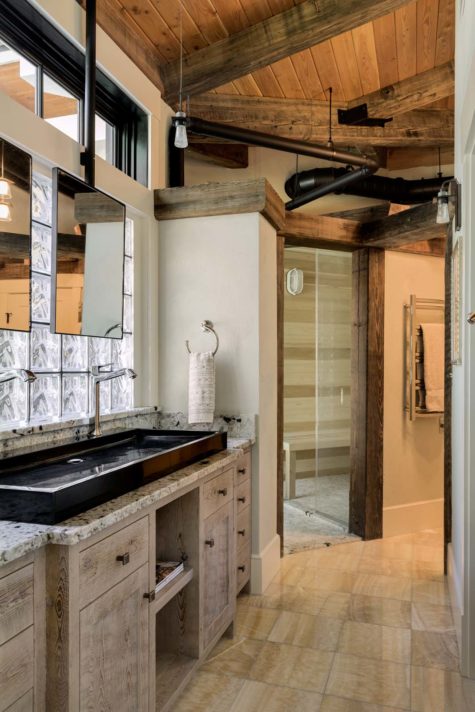 In the owners’ suite bath, a glass block wall brings in light while providing privacy. Twin mirrors mounted on pipes hang over a trough-style sink. The sauna is lined in poplar because traditional redwood or cedar can trigger allergies.

In the main hall, salvaged beams visually lower the ceiling while maintaining airiness. The walls are covered in brick from old New York buildings. The salvaged bricks have been sliced in half to provide authentic texture without cutting into the necessary plenum space.