A classic turn-of-the-century cottage is brought back to life with timeless decorative touches, strategic pops of color, and lots of natural light 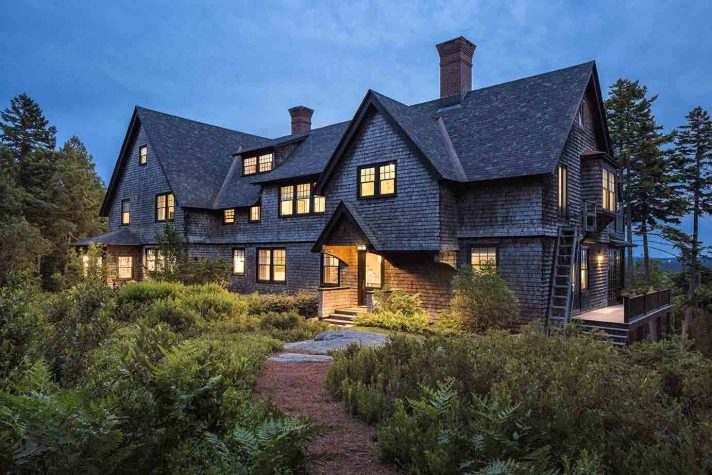 Designed by noted architect Fred L. Savage, Sunset Ledge was commissioned in 1900 by George Wharton Pepper of Philadelpia, who later became a U.S. senator. As its name suggests, the home is situated to make the most of nearby harbor and mountain views, particularly in the evenings. 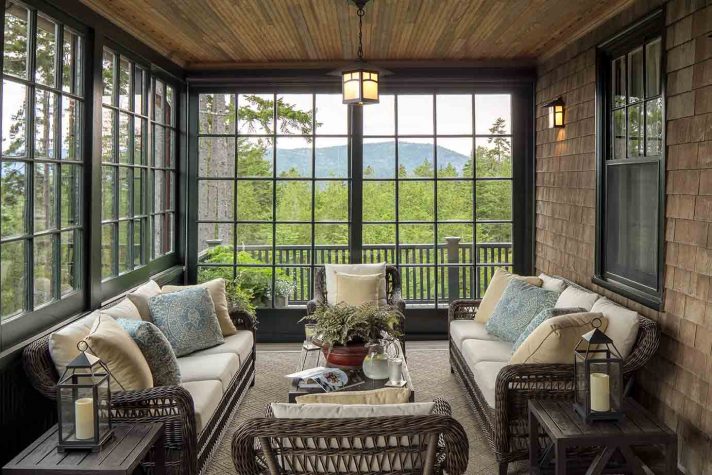 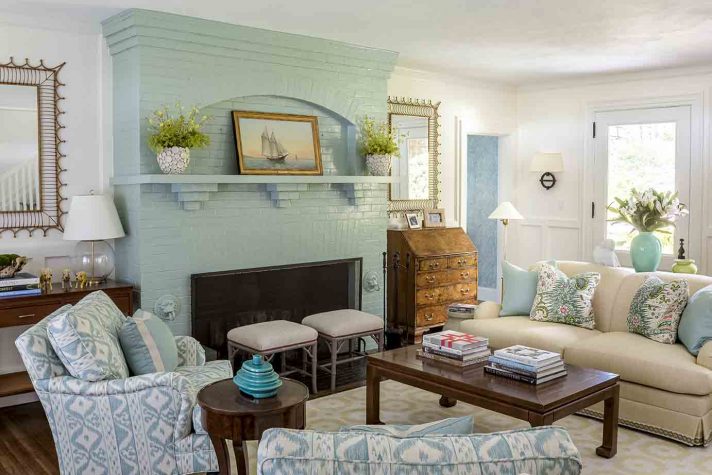 The sofa pillows, covered in Quadrille’s iconic “Les Indiennes” print, echo the color palette used throughout the house, while the two chairs are upholstered in a Cowtan and Tout ikat print. A pair of Bunny Williams Home’s “Rex” mirrors flank the fireplace; a painting by Peter Williams, Minot’s Light, sits on the mantel. 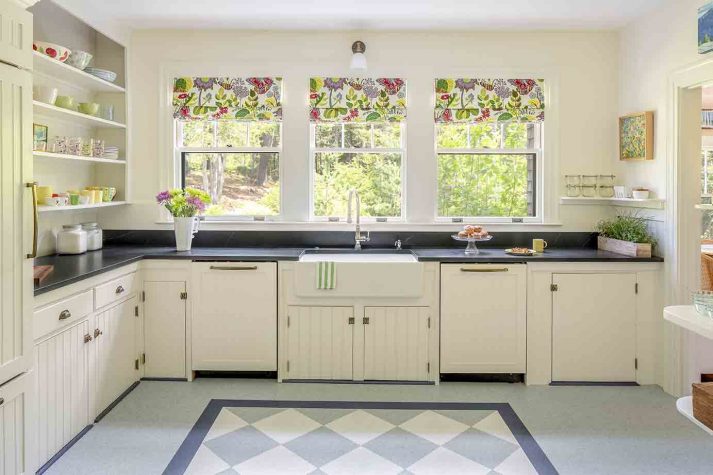 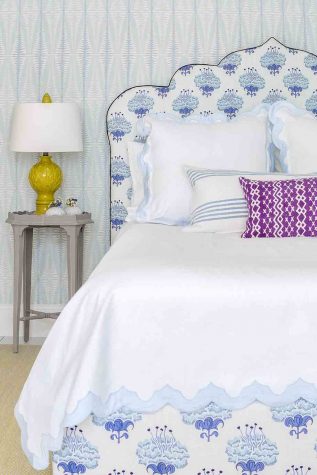 Fremont-Smith designed the custom headboard in the “blue” guest room and covered it in a Katie Ridder fabric, with aubergine trim for definition. 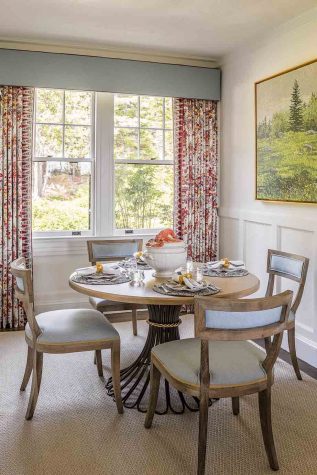 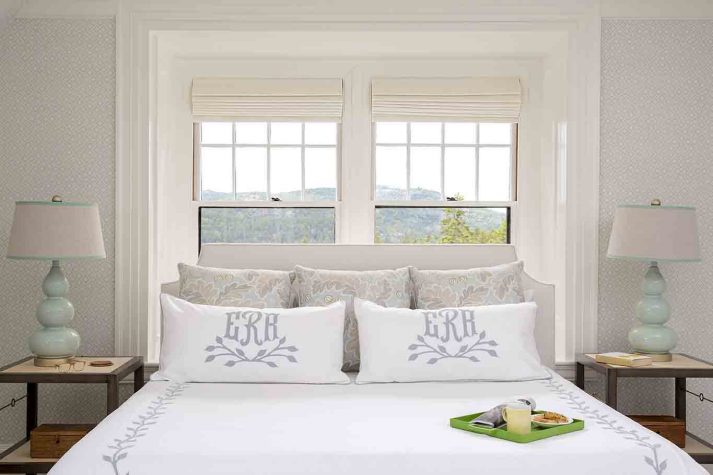 The custom headboard in the owners’ bedroom is shorter than usual to allow unobstructed mountain views, while euro shams in Cowtan and Tout’s “Melbury” reflect the scenery outside. 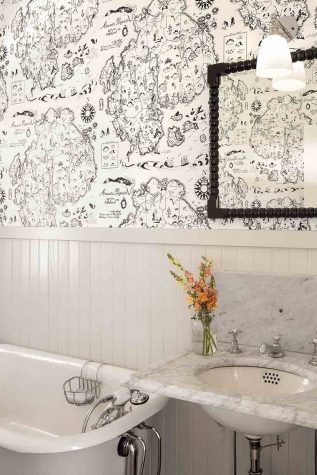 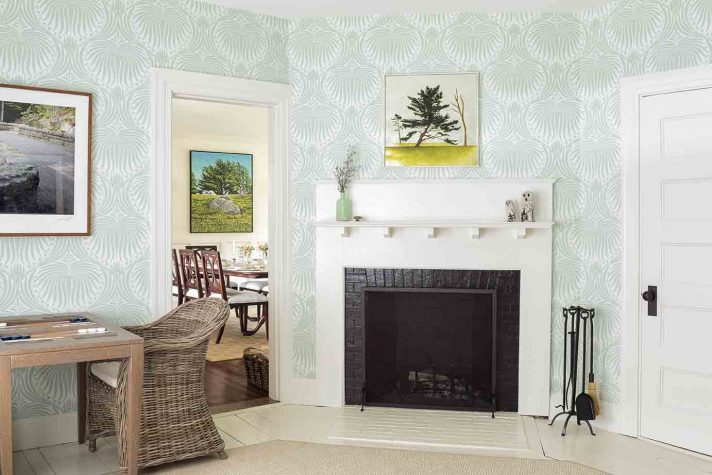 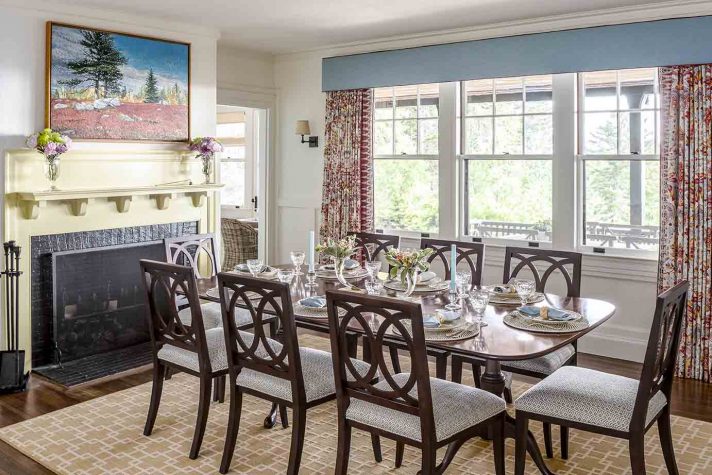 An elegant antique double-pedestal table anchors the formal dining area, while the curtains in Brunschwig and Fils’s “Tamerlane Cotton Print” play off the colors in the nearby James Linehan painting titled "Windy Hill." 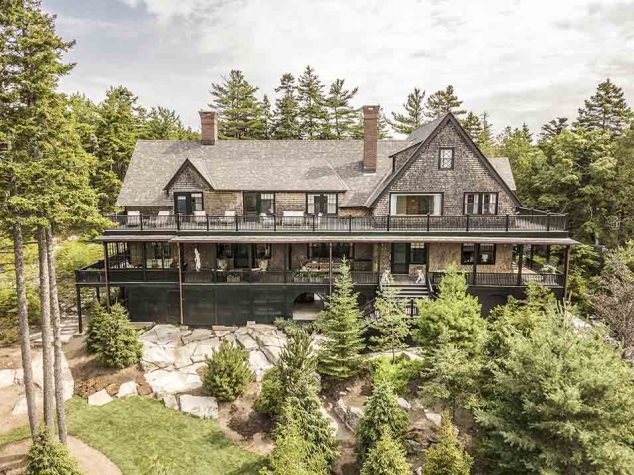 Early on, the couple cleared about 100 trees that had grown around the house. Landscape designer Jen Macomber has been working with the couple for the past five years to thoughtfully reintegrate larger trees around the property. 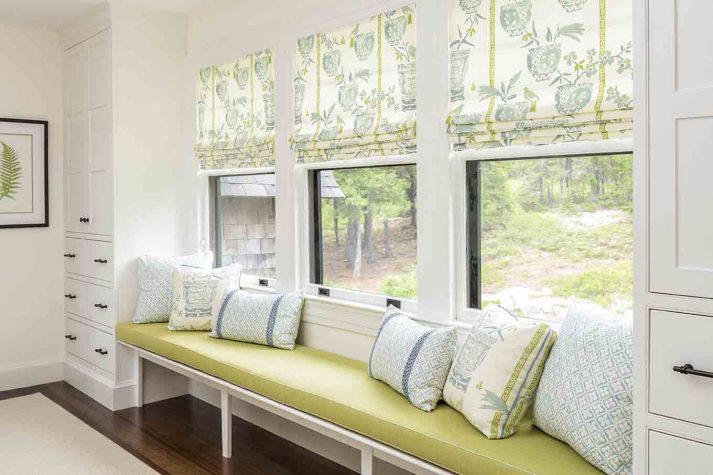 Custom cabinets and a built-in window seat, accented with blues and greens to evoke the surrounding landscape, greet guests at the top of the stairs. 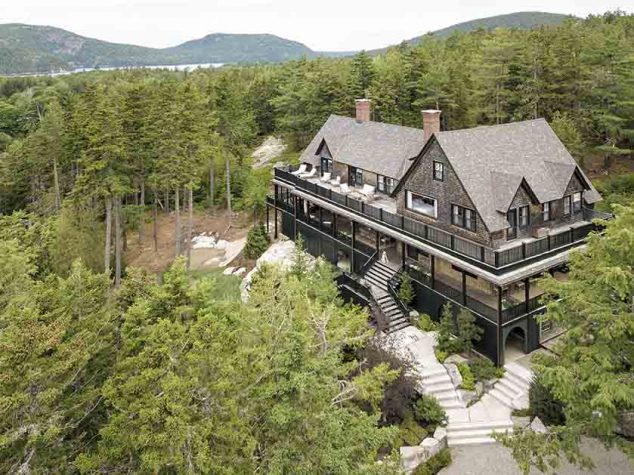 “The terrain is unique up there,” says landscape designer Jen Macomber, referring to the massive rock ledge that surrounds three sides of the home. 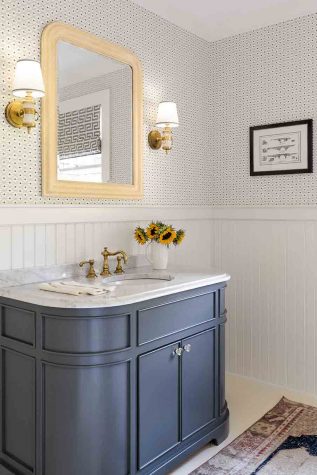 For most Maine residents, the name Fred L. Savage immediately brings to mind the architect’s iconic weathered and shingled “cottages” with large airy porches, and the refined sensibilities of the Gilded Age. Savage was prolific in the Mount Desert Island area—specifically, in Northeast Harbor, where he was born and raised—building over 300 homes and hotels there between the 1890s and 1920s. His structures are particularly beloved because, in true arts and crafts style, they fit, seamlessly, into the landscape and tend to not be overly obvious or ostentatious, despite their scale. One of these cottages, Sunset Ledge, was commissioned in 1900 by George Wharton Pepper, a Philadelphia lawyer, law professor, and U.S. senator (1922–1928). The home, which was completed in 1902, sits atop Northeast Harbor’s Schoolhouse Ledge—similar to the other seven Savage homes nearby, it was built directly into the massive rock ledge beneath it—and has picturesque views of the surrounding mountains, Somes Sound, and the ocean beyond.

Pepper—an outspoken opponent of John D. Rockefeller’s plans for building roads in the area, before the formation of Acadia National Park—sold the house in 1937. After that, it was owned by two other families and was used as an artists’ retreat before it was purchased by the current homeowners in 2016, longtime summer renters looking for an area home they could make their own. “We knew as soon as we walked in the door,” says the wife of their decision to buy the neglected property, despite it being “a disaster” inside and out. Fortunately, both husband and wife grew up in historic homes and were able to see beyond the overgrown trees and unkempt landscape, as well as the dark, dilapidated interiors of the sprawling estate. They wanted to bring it back to life. “The house deserved respect,” she says.

The couple lived in the cottage for a summer before they started renovating, although they did remove roughly 100 trees that had grown up around the house in order to open things up and let some light inside. “Before, people didn’t know there was a house there,” says Jen Macomber, the landscape designer who started working with the homeowners that first year. Over the past five years, with Macomber’s help, at least as many new trees have been planted as were removed initially, many of them taller and larger, thoughtfully placed to help balance the scale of the home with the surrounding landscape. They also provide privacy.

From the beginning, the homeowners knew they wanted to retain the property’s old Maine charm, working with what was already there and essentially sticking with the original floor plan. Working in phases, there were two main goals: to infuse the interiors with easy elegance and to make the most of the endless water and mountain views, including those from the expansive porches that wrap around the first and second floors.

For the interiors, they turned to another longtime MDI summer resident, designer Leandra Fremont-Smith, and charged her with creating a home that would be sophisticated yet comfortable, and not too splashy. Aside from specifying a color palette that emphasizes pale greens and blues, with poppy red accents, they gave Fremont-Smith free rein. As the designer explains, the roughly 6,500-square-foot home was actually very modest, aside from its scale and pedigree. “Savage designs are simple, and this home didn’t have a lot of embellishment, though it does have working fireplaces in most rooms,” she says. “But it was in rough shape.”

Fremont-Smith is known for working with lively patterns and color, but for this project she reserved those things for textiles and strategic moments of vibrant, period-appropriate wallpaper, to add texture and depth. Instead, she painted most walls in shades of white, lightening up the interiors and providing a neutral backdrop for the homeowners’ collection of works by local artists. Her objective: designing for ten years down the road, not just for today. “I want to keep my clients inspired and content for a long time,” she explains.

In terms of the design, one of the biggest challenges, upfront, was the crumbling condition of the interior walls, which had been coated in calcimine “paint,” a chalk-based powder mixed with glue that was popular in the late nineteenth and early twentieth centuries as a cheaper, easier alternative to oil-based paint. It was meant to be washed off but had been painted over. As a result, walls throughout the house needed to be stripped and replastered. Other, earlier upgrades included the installation of all-new custom windows as well as smart-technology lighting and HVAC systems.

Unsurprisingly, the kitchen, pantry, and bathrooms required the most work. Initially, Fremont-Smith wanted to completely renovate the kitchen, but the homeowners were partial to its original “Maine kitchen” character, so she simply updated the room. The vinyl floors were replaced with linoleum, laid out in a traditional checkerboard pattern with a contrasting blue border. The existing cabinets were repainted in a soft white, and Fremont-Smith installed a farmhouse sink and dark quartz countertops, which mimic the look of classic soapstone but are easier to care for. In the adjacent butler’s pantry—which also opens into the dining room—she used Farrow and Ball’s Blue Ground paint on the walls, and she added stainless-steel countertops and cork floors “to make a not-so-exciting space more dramatic.”

In the airy, light-filled living room, Fremont-Smith used another Farrow and Ball shade, Green Blue, to make the original fireplace a focal point. She then added complementary textiles and accents throughout the space to pull it all together. To the right of the fireplace, she reconfigured a former powder room entrance and installed a wet bar with a mahogany countertop. Next door, in the dining room, she created two distinct eating areas that can be used separately or to accommodate a large dinner party. The formal dining space features a traditional full-size table, while the breakfast nook’s smaller, informal round table delivers a jolt of fun, updated energy. “I wasn’t sure what to do with the extra nook in the dining room,” she says. “I ended up using completely different furniture there because I didn’t want it to compete [with the rest of the room],” she says. In the nearby game room, she covered the walls with Farrow and Ball’s Lotus paper to balance the arts and crafts simplicity of the fireplace. Two downstairs powder rooms were given classic re-dos, with distinctive wall treatments and new fixtures.

At the top of the staircase, Fremont-Smith added a custom, built-in window seat and two large cabinets for linen storage. The only area of the home where rooms were reconfigured was the owners’ suite, which now features his-and-hers dressing rooms off the bedroom as well as an owners’ bath, which was completely refitted with Carrara marble floors and surfaces, an open washstand, and a custom glass shower.

Fremont-Smith’s favorite spaces, however, are the two adjacent “sister” bedrooms, which now feature complementary designs of layered patterns and colors. “The other rooms were all tranquil and sophisticated, so by the time we got to these rooms, I thought, let’s have some fun.” For the “Blue Room,” she designed a custom upholstered headboard using Katie Ridder fabric, to go with the hand-blocked Galbraith and Paul wallpaper and citrine accents. In the “Purple Room,” she used a contrasting lilac Galbraith and Paul paper and corresponding Roman shades to envelop a vintage-style Serena and Lily spool bed. Throughout the home—but especially in the bedrooms—she added early-1900s-inspired furnishings and accents, typical of the pieces people brought back from their “grand tours” during that era, including antiques, chinoiserie, and other Asian-inspired touches.

That same sense of easy, organic authenticity is also evident in the landscaping. One early project involved adding a bifurcated staircase, climbing from the driveway to the house, that incorporates some of the underlying rock ledge as well as strategically placed pieces of granite, with one staircase going to the porch and the other to a frequently used side entrance. Macomber is also methodically adding pockets of trees along the ledge. “It’s an ongoing process, embracing the existing landscape and trying to blend in new things…and then finessing it if it doesn’t work out,” she says, acknowledging the challenges of planting along the ledge, while also contending with the weather and resident deer population. Her latest projects include installing cutting and vegetable gardens and adding a teak hot tub that will be subtly nestled into the ledge to look out over the western mountains and water. Given the location of the home and its grand porches, the extraordinary outdoor views are what truly set the prop-erty apart. “This place has the most amazing sunsets,” says Macomber. “The gloam is incredible. Everything has these golden hues. It’s almost like you’re in the movie Out of Africa; it’s magnificent.”

The homeowners are also big fans of the sunsets, of course, but after all the work that’s been done, inside and outside, it’s the warm, genuine ambience that makes them the happiest. “It’s wild what’s been accomplished, by both Leandra and Jen,” says the wife of the transformation. “The house is so welcoming. It’s the kind of place where you can go barefoot, not be formal, and just appreciate nature,” she adds. “It’s like a big hug.” 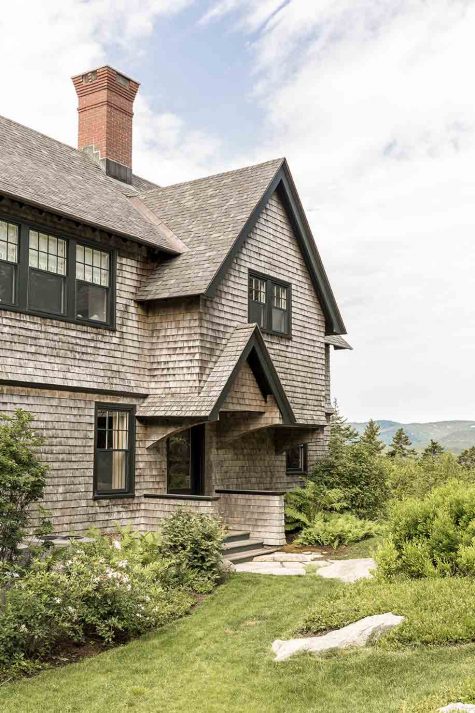 Over the past few years, landscape designer Jen Macomber has added strategically placed shrubs, sods, and plantings—including blueberry bushes and spruce and pine trees—that blend with the property’s natural landscape and are deer resistant. 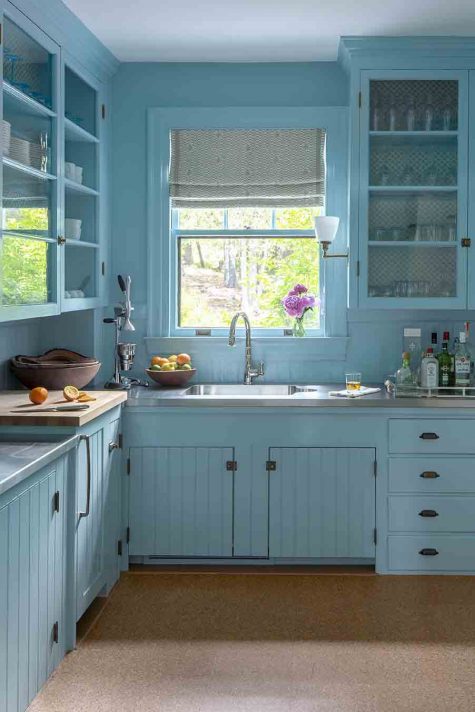 “I love color,” says Fremont-Smith, regarding her decision to paint the butler’s pantry all one shade. “It adds depth and texture, and the light will always reflect differently.” Another surprising touch: the eye-catching Schumacher wallpaper she added inside the glass cabinets. 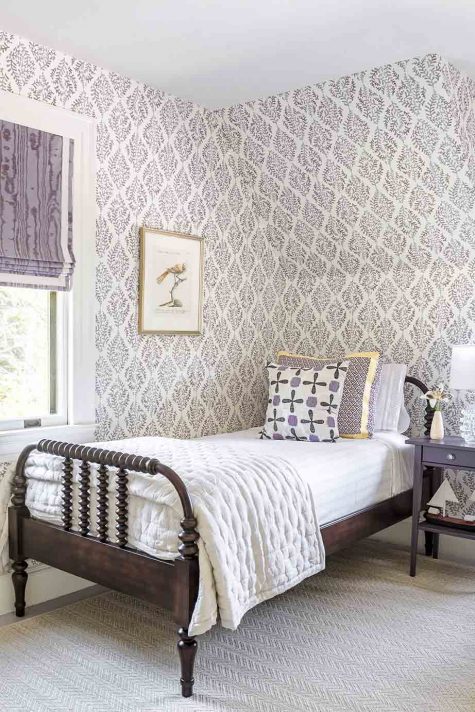 Hand-blocked wallpaper from Galbraith and Paul is paired with faux-bois Roman shades by Quadrille in the “purple” guest room. 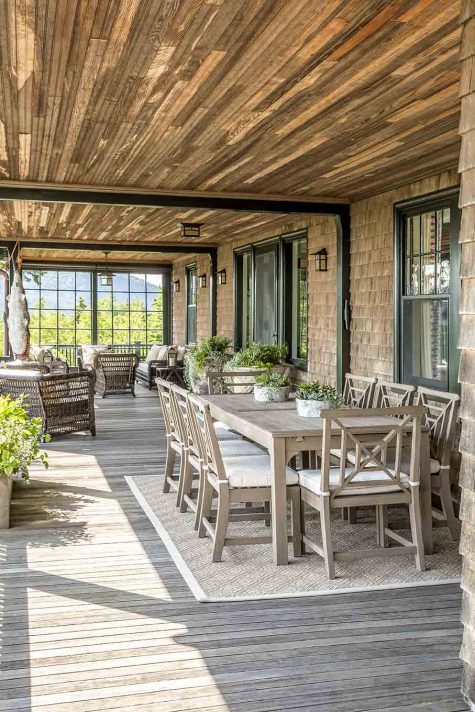