A Revamped Camp on Horne Pond Pays Homage to its History

Renovated by Caleb Johnson Studio, this lake house preserves a family’s memories while bringing much needed updates for the next generation 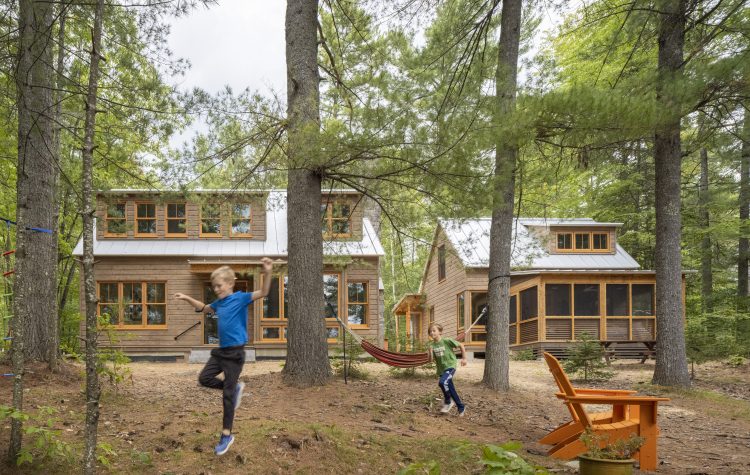 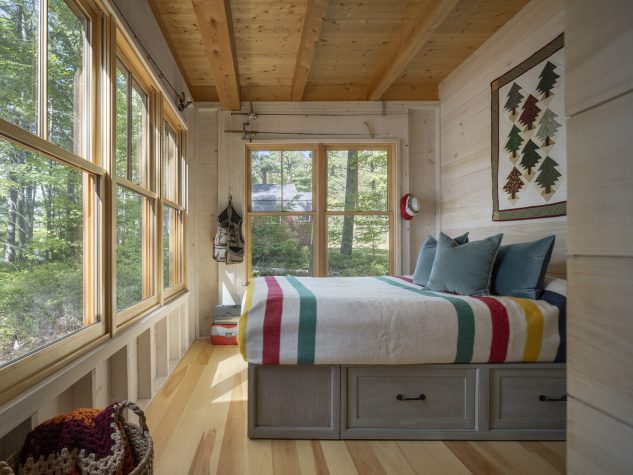 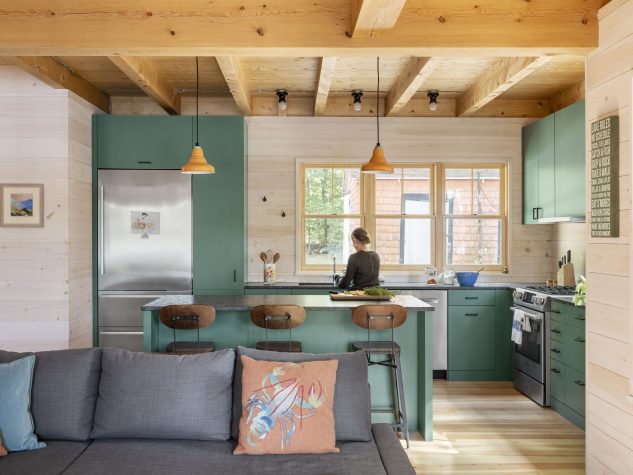 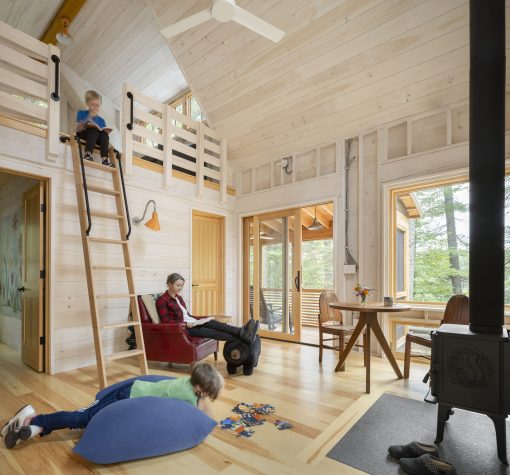 The guest cabin accommodates a loft for additional sleeping, with two bedrooms underneath. In one bedroom, a sheet of Masonite that a family member once painted with flowers and hung on one of the buildings is repurposed as art. 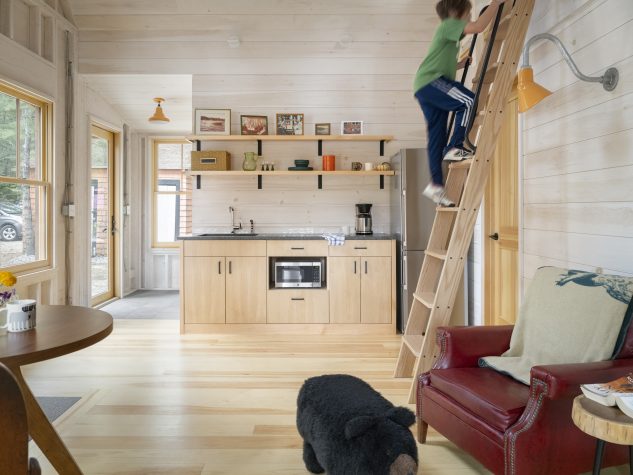 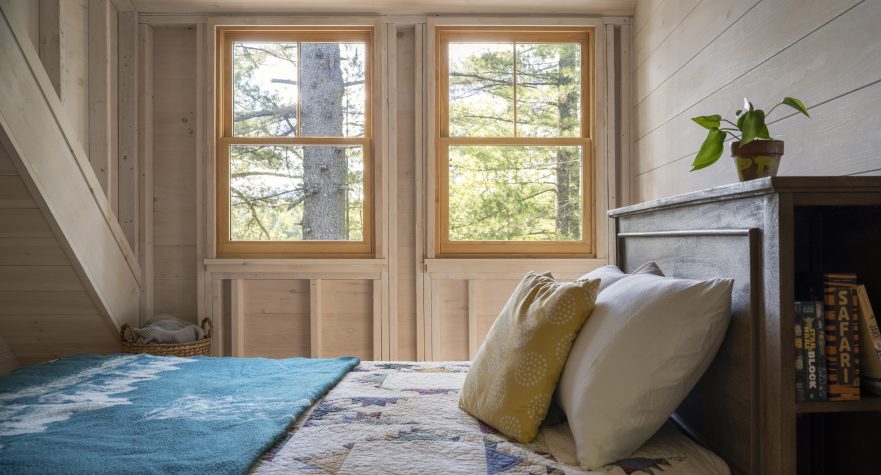 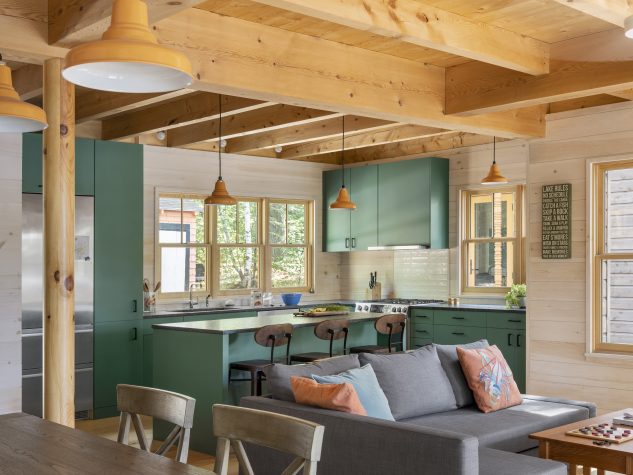 The inside is clad in white washed pine floors and paneling with hemlock beams overhead. The kitchen cabinets are white oak veneer finished in a tealy green lacquer. The expanded great room proportions allowed for a dining table that accommodates the large family. 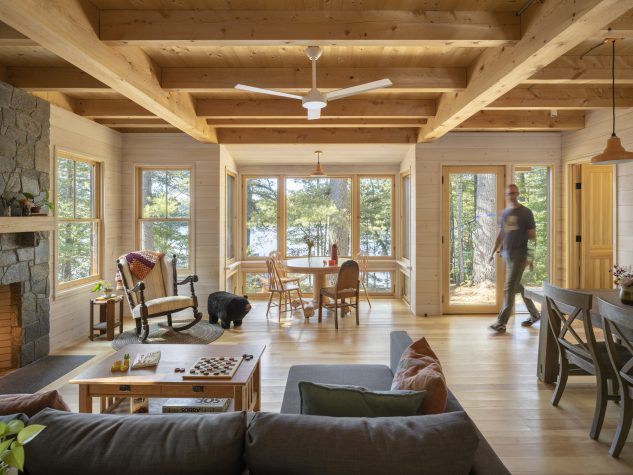 Caleb Johnson Studio opened up the warren of rooms to create one large great room that is more conducive to large family gatherings; a bumped-out bay provides 280-degree views of the lake and woods. 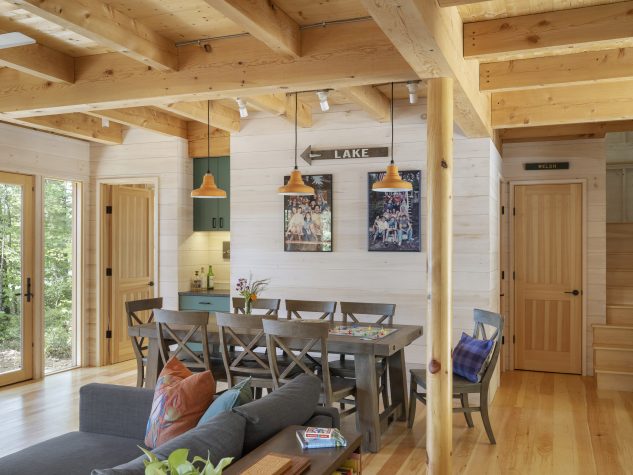 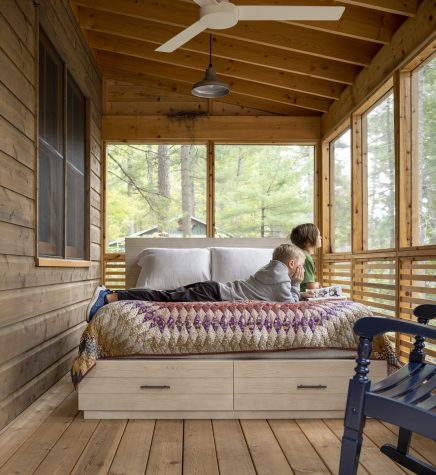 For a sleeping porch in the guest cabin, the owners purchased a bed with storage drawers underneath. 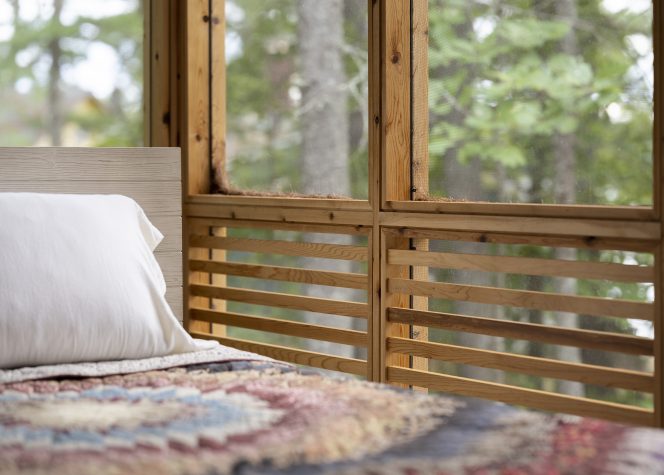 The orange-shingled utility shed is a remnant of the original camp. The design team applied the color to the trim on the new cedar-sided buildings.

When David Duncan Morris and Peter Floeckher—director of design at Caleb Johnson Studio and director of residential construction at Woodhull of Maine, respectively—started a teardown and rebuild of two cabins on Limington’s Pequawket Lake (also known as Horne Pond), Floeckher filmed their dismantling. Then he sent the video to the clients, Ann and Carden (who prefer to use first names). Ann found the complex process fascinating to watch. However, to this day, says Carden, “I can’t watch it.”

Few things grip our hearts and minds more than memories, and their hold on Carden is tight. One day in 1959 his father and grandfather had gone house hunting, and they happened upon this camp. Entranced by the sandy beach and the afternoon sunlight of its western exposure, Carden relates, “My father cashed in both his and my mother’s life insurance policies—much to my mother’s chagrin—and bought it. We spent six to eight weeks here every summer after that.”

Over the ensuing years, Carden and Ann, both now 68, married and had four children. Their children in turn gave them 14 grandchildren, currently between the ages of 1 and 21, 5 of whom live in the area. The couple also shared the cabins with siblings who arrived with their own retinues of kids and grandkids. On busy weekends, Carden recalls, “Tents were pitched all around. Someone brought a new trailer. We were just out of space.”

Carden kept saying the camp needed an overhaul, but somehow the sanctity of his blissfully perfect recollections always dulled his impulse to initiate change. It was finally Ann who jumpstarted the search for an architect and builder, which were ideally combined in one package at the full-service design firm Caleb Johnson Studio and affiliated construction company, Woodhull of Maine. “Ann pointed out that we weren’t getting any younger,” says Carden sheepishly.

It became evident in the initial planning meetings for the project, recalls Morris, that “the buildings had reached the end of their useful lives. It was asking too much of them to have them go on for another 50 years.” More important, he also understood a less physically tangible idea that would end up driving their concept: “If you’re going to take something away that’s so beloved and replace it with something new, you’d better make sure people still find that sense of place and belonging there.”

“It was very traumatic for my husband to take the cabins down,” acknowledges Ann. “So it was really important for us to keep the sense of the old camp. The architects actually captured the essence of it.”

The old cabins and the utility shed had been clad in cedar shakes that were painted a cantaloupe orange (“My mom’s dad was Norwegian,” explains Carden, “and in Norway they paint their summer cabins very bright colors”). Lake environments like this tend to be damp and steamy and, Morris explains, “The cabins sat so low to the ground there were inherent problems with moisture and water.” The main floor was divided into various rooms, the floors were uneven and dark, and the windows were small. Because there were neighbors on both sides, “the property was hemmed in,” he adds, so the decision was made to expand the main cabin upward and design a loft into the secondary cabin.

Carden and Ann directed the team, which included project manager Leah Schaffer (whose role was later assumed by Caleb Johnson’s director of residential operations, Teresa Telander, when Schaffer left the studio), to keep everything rudimentary. “We needed lots of bedrooms, but relatively small ones, with only enough room for a bed,” says Ann. There would be no heat or insulation, just open stud bays and exposed, metal-cable-encased wiring. “A finished cabin was not the goal here,” observes Morris.

Upgrades would be minimal. “In the previous cabins they had neither a dishwasher nor laundry,” Morris remembers. “Ann and Carden told the family they could have one, not both, so they chose the dishwasher. There were traditions they feared losing if they became too fancy. The idea was that this was the way it had been for 50 years, and it had been fine. They didn’t want to spend their time at camp doing laundry.”

The question became, says Morris, “How could we do something architecturally interesting that has meaning and is not just gratuitous?” Answer: Two structures raised off the ground, one on a foundation and the other on a pier system, both framed in hemlock with cedar siding outside. Inside there would be pine floors and pickled walls—“all wood,” Morris notes, “which allowed the structure to be exposed as it would be in a traditional camp cabin.” They would total about 2,700 square feet between them, accommodating five bedrooms and two bathrooms in the main cabin and two bedrooms (plus the sleeping loft) and one bathroom in the secondary cabin. A screened porch would provide additional sleeping quarters.

The cantaloupe orange, which still colors the extant utility shed, would be deployed as trim accents on the new buildings. “To have a two-story cabin that is all orange would have been too much,” admits Ann. “And repainting cabins every few years was always a lot of maintenance.” Orange was also deployed on some porch posts that, to the uninitiated, might appear oddly, irregularly turned on a lathe. Actually, they are carved with Morse code markings that spell out the original purchase date, rebuild date, and the birth dates of Ann, Carden, and his family.

Other concessions include an attractive and substantial Black River stone fireplace wall in the now open-plan great room of the main cabin (replacing a stove on a brick hearth); kitchen cabinets of white oak veneer finished in a teal green lacquer; and slate tile floors in the bathrooms. The owners handled most of the intentionally simple decor, saving key heirlooms and cherished items while replacing beds with platform versions that contain drawers for more storage.

The project went fairly smoothly, the biggest hitch being the onset of the pandemic, explains Floeckher. “Materials were ordered before COVID hit,” he says gratefully. “But they became harder and harder to get our hands on. We also slowed way down because we didn’t want to over-crowd the jobsite, bringing in one craftsman at a time to practice social distancing, rather than several simultaneously. So it affected the sequencing.”

Floeckher points out that the revealed structural wood—studs all around and floor joists overhead—had the advantage of offering cavities in which to recess the few exposed mechanicals as well as lighting. With ceilings of modest height, lighting could be tucked between joists instead of hanging too low.

Despite the fact that Carden still cannot watch Woodhull’s video, he was surprised and thrilled with the results. “The beauty of the natural wood is something I didn’t expect,” he says happily, and the orange cedar-clad shed is still there as a comforting reminder of the idyllic childhood summers he still cherishes. Things haven’t really changed that much, except that everyone’s not as crowded in, and cleanup after meals is more convenient with a dishwasher.

“It’s not clinging to the past, refusing to acknowledge that change happens and is needed,” says Morris of the revamped camp. “They took a really brave step in trying to build the next 50 years of their family out there. I feel like we were able to help them transition into a new experience of this lake.” Which will, of course, produce more potent memories for younger generations. 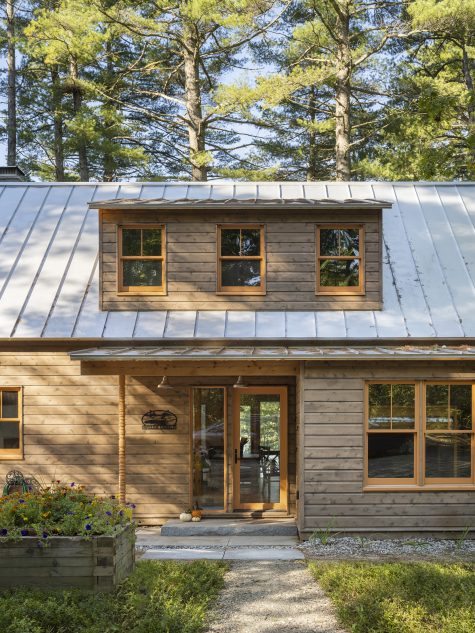 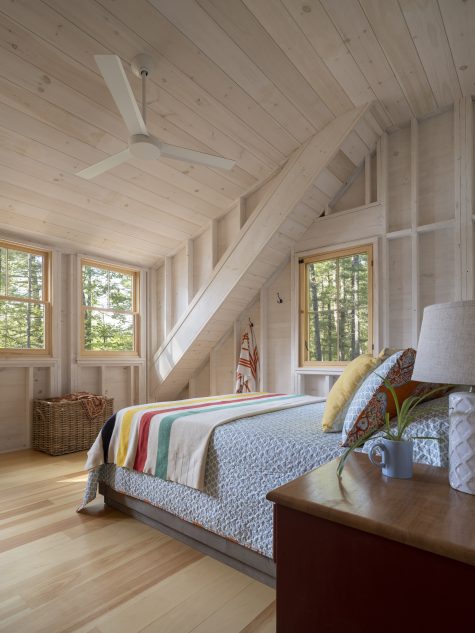 The cleaned-up camp aesthetic preserved the simplicity of the old buildings’ open-stud bay system, as well as exposed mechanicals; the pickled pine emphasizes the attractively rustic feel of graining and knots in the wood, while making the space look more contemporary. 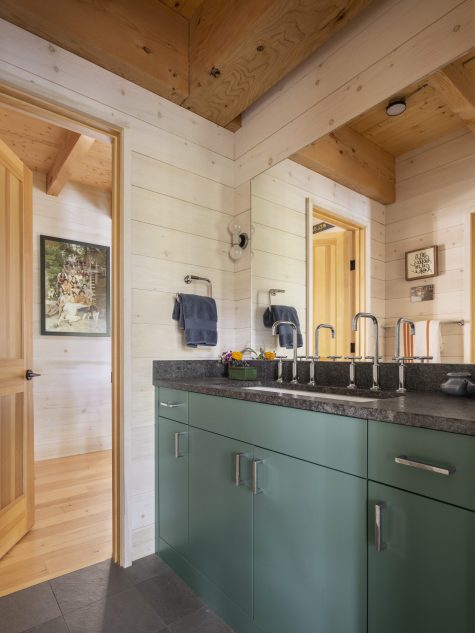 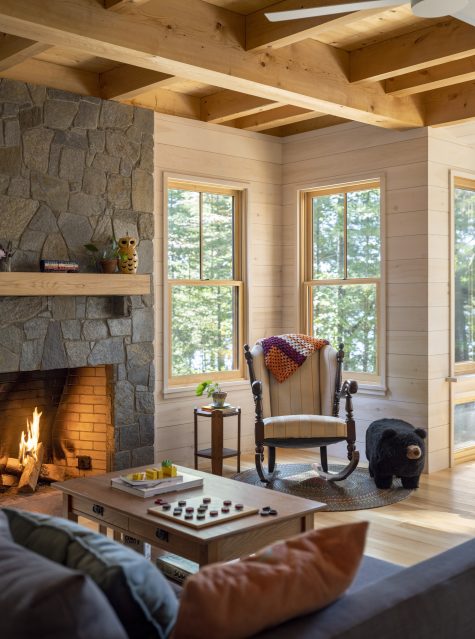 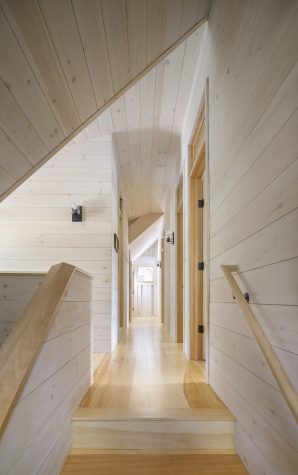 The main cabin became a full two-story structure that accommodates four upstairs bedrooms accessed by a corridor along the spine of the building. 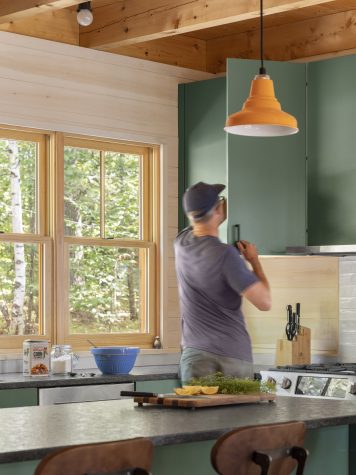 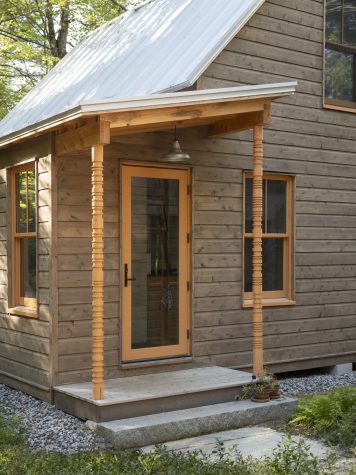 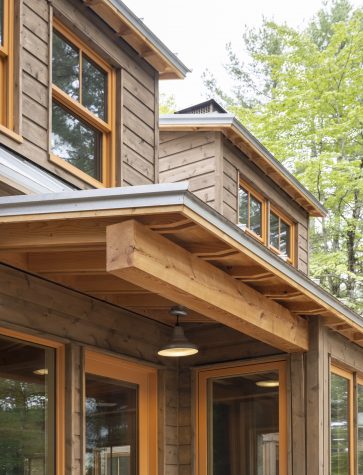 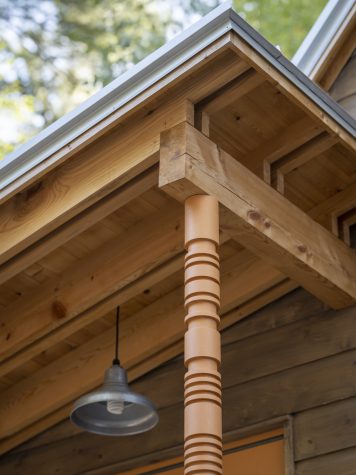