Due to one family’s determination, this home (designed by architect Wallace K. Harrison and artist Isamu Noguchi) was impeccably restored after a devastating fire. 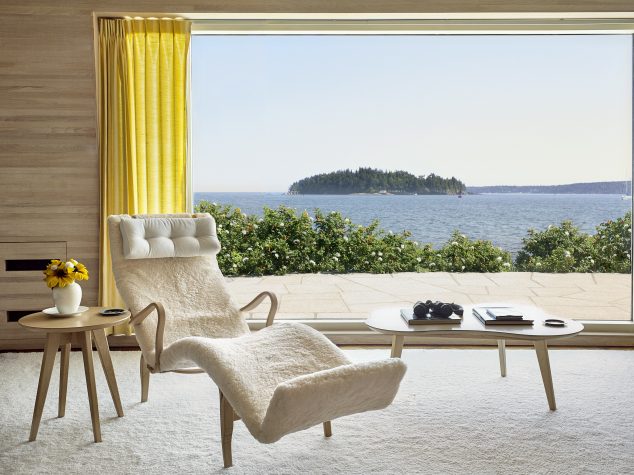 The living room features a floor-to-ceiling picture window overlooking Great Harbor and Bear Island. The coffee table, side table, and chairs are by Jens Risom for Knoll. 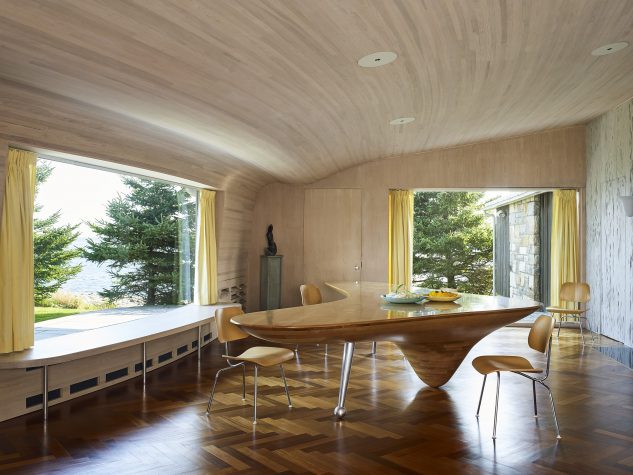 For the house Sea Change, Isamu Noguchi designed a dining table of yellow birch to resemble a ship’s hull. It burned in the fire that destroyed the house in the late 1990s and was recreated by sculptor and woodworker Mark Loftus. The 1940s chairs are by Eames. 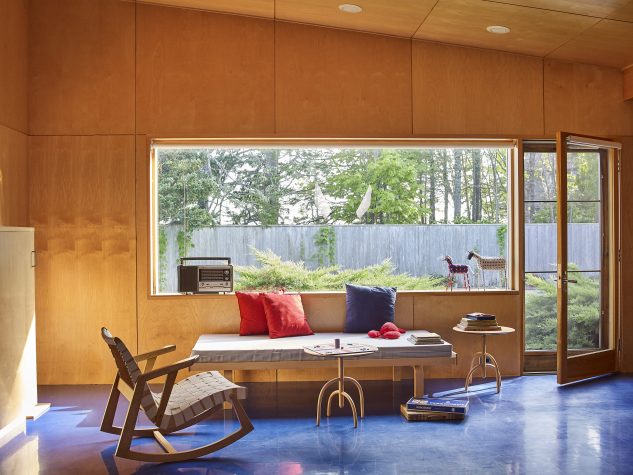 The playroom, originally built to accommodate William and Margaret Burden’s four children, has been carefully restored. 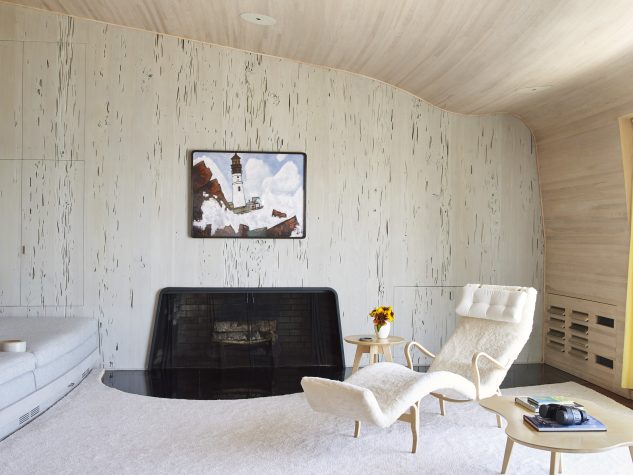 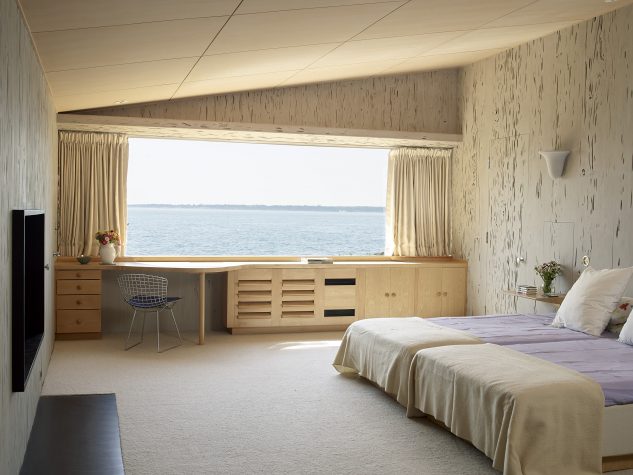 In the owner’s bedroom, the walls are pecky cypress. The built-in cabinetry has the sleekly efficient look of an ocean liner, and the curved form of the desk reflects the shoreline beyond. 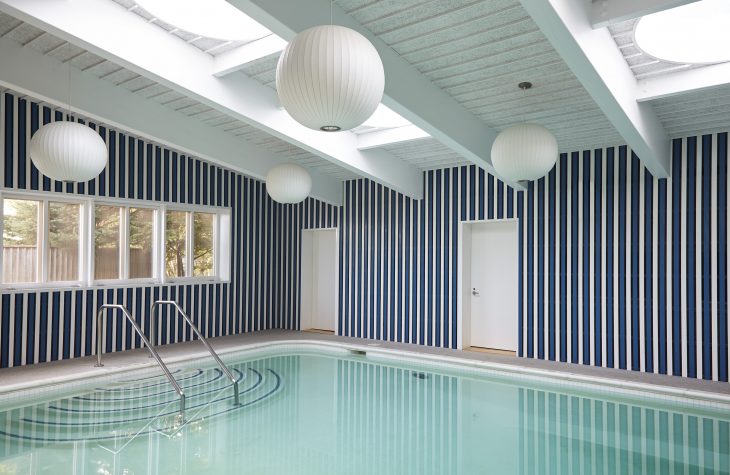 An indoor swimming pool was added in the early 1980s. 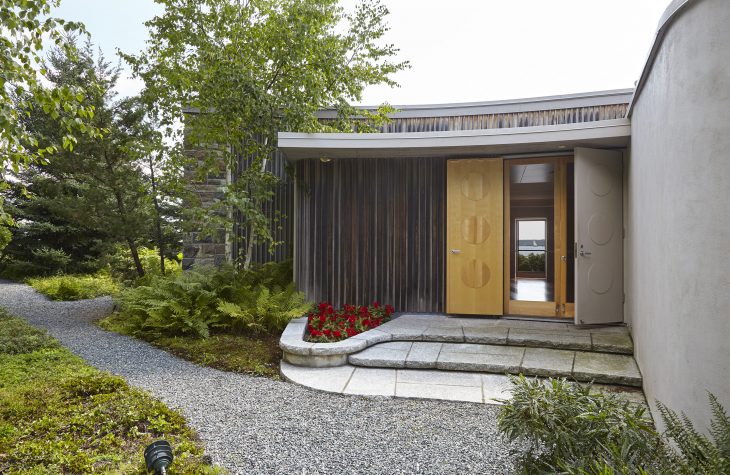 A gravel path winds through low bunchberry, moss, and ferns from the driveway to a small front door adorned with three circular panels reminiscent of portholes, where a low-pitched roof extends over granite flagstone steps. 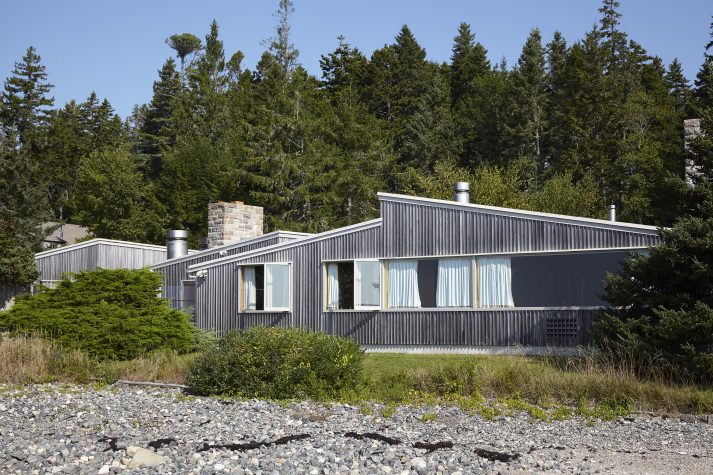 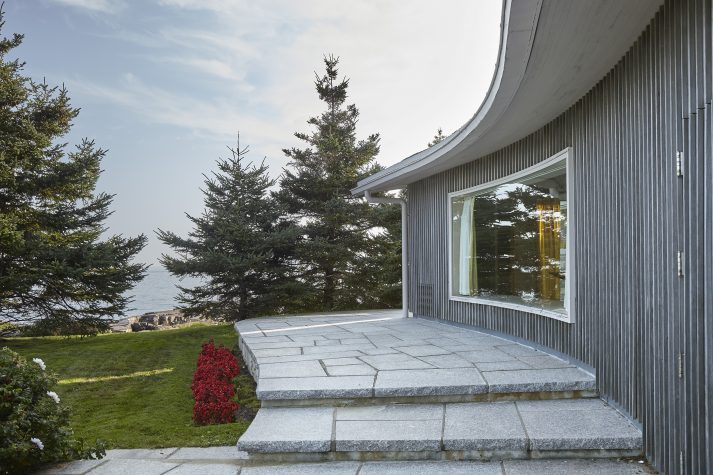 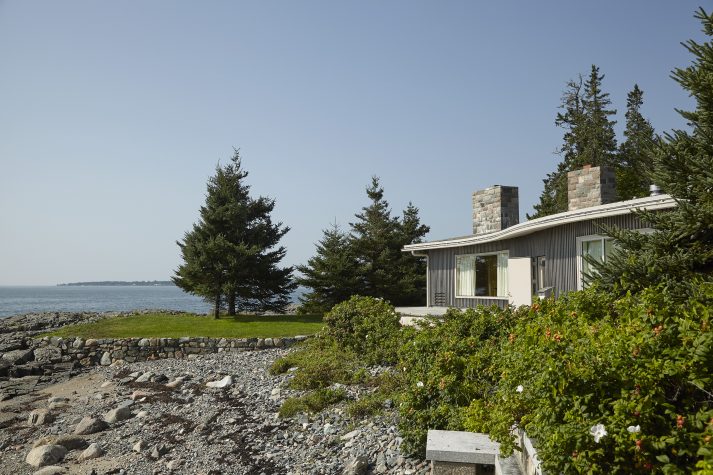 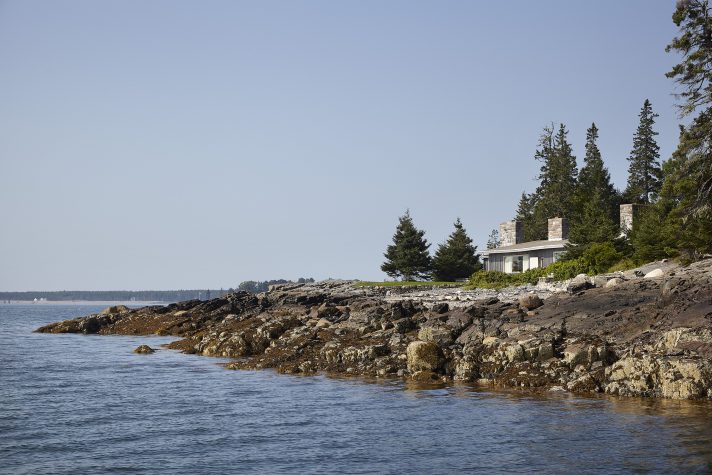 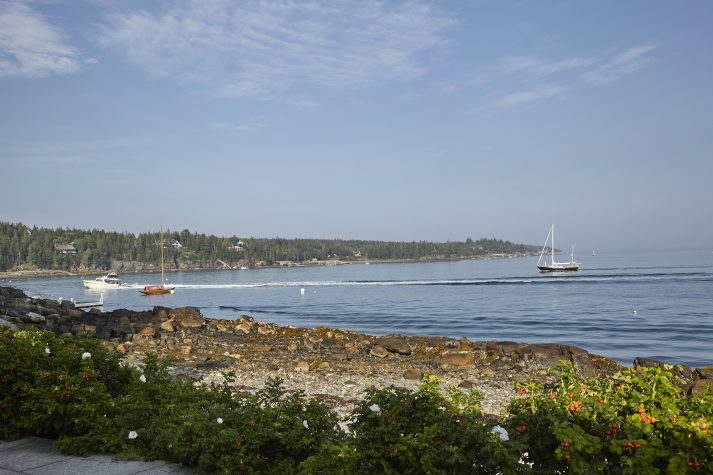 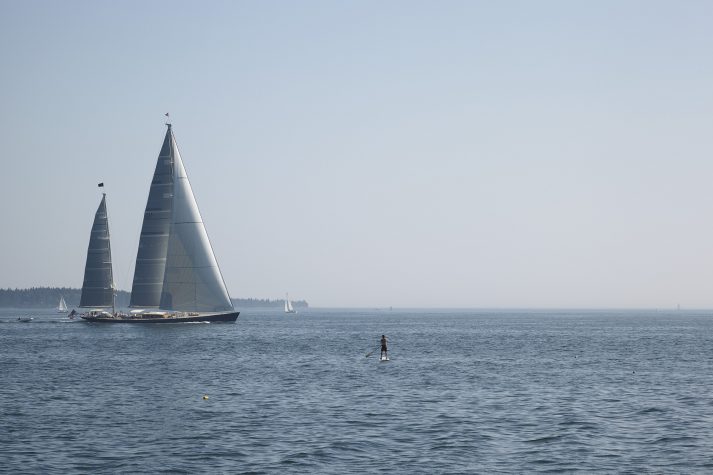 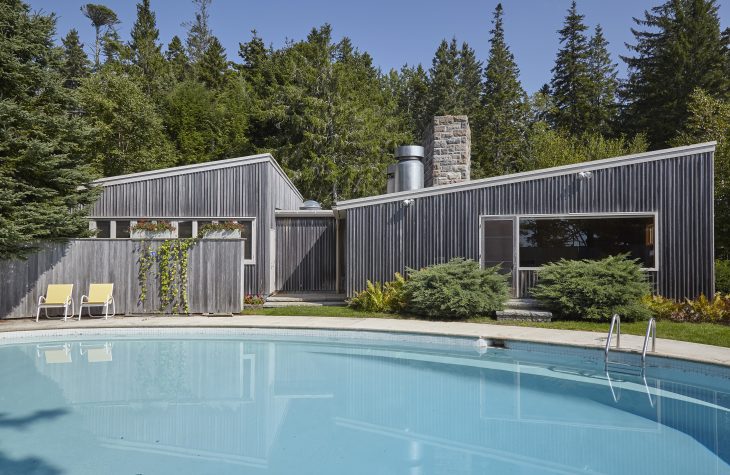 The house is composed of three one-story masses, or pods; the pool is positioned outside the playroom.

In 1939 William Burden, a scion of the Vanderbilt family, and his wife, Margaret, purchased a small peninsula extending from Maine’s Mount Desert Island into the Great Harbor. Originally owned by the Corning family, the property included a shingle-style cottage as well as a string of small cabins referred to as “sleeping pavilions,” all designed by Gilded Age architect Fred Savage, whose 300-plus turn-of-the-century commodious summer places—most notably, the Asticou Inn—defined the look of Northeast Harbor. But William, an early advocate of modernism and a longtime trustee of the Museum of Modern Art, seized the opportunity of a dramatic setting to imagine something wholly different from the houses of his fellow rusticators. He called upon fellow modernists, New York City architect Wallace K. Harrison (a lead architect known for his work at both the United Nations and Rockefeller University) and artist Isamu Noguchi, to imagine a house that would umbilically tie art and architecture with nature and shelter.

Modern structures in the United States were a rarity until after World War II, when scarce supplies inspired the architectural ingenuity that William Burden embraced. He admired Harrison’s summer retreat in West Hills, New York, an early example of the International Style residence, with its iconic two-story, circular living room. A renowned champion of civic art, William was also well acquainted with Noguchi’s work, most notably the 22-foot-high stainless-steel bas-relief sculpture News, installed in the lobby of 50 Rockefeller Plaza. Noguchi’s depiction of five journalists was unveiled in 1940 to great acclaim. It was one of his last representational pieces before his work became more abstract and nuanced: a result of the artist’s growing obsession with void, change, and hope after being imprisoned in a Japanese American internment camp. The collaboration among William, Harrison, and Noguchi resulted in a dazzling, low-lying residence tucked into the Mount Desert coastline that embodied the concept of “site specific” long before the term was popularized. Named Sea Change, after a line sung by the spirit Ariel in Shakespeare’s The Tempest, the house was completed the same year as Philip Johnson’s Glass House in New Canaan, Connecticut, and the Eames House, also known as Case Study House No. 8, in Pacific Palisades, California. While less famous than its International Style siblings, a visit to Sea Change is equally transporting.

A gravel path winds through low bunchberry, moss, and ferns from the driveway to a small front door adorned with three circular panels reminiscent of portholes, where a low-pitched roof extends over granite flagstone steps. The house is composed of three one-story masses, or pods, organized around the small entry courtyard. (A fourth mass to the west of the house, containing an indoor pool, was added later.) Upon opening the front door, one is immediately struck by a panoramic view through enormous picture windows of the rocky shoreline and Great Harbor beyond, where the horizon is broken only by a small, pine-covered island. The living and dining rooms are contained in one mass under a single-pitch roof that slopes down toward the harbor. Walls of gray-stained pecky cypress, curving like an ocean wave, reach up to an undulating fir ceiling finished with a light limewash or bleach.

The north wall of the living room features a fireplace set behind a dark, polished granite hearth. The west wall of the living room is lined with low, wide, built-in captain’s chair- type couches over which bookshelves stretch to the ceiling—one of many examples of Noguchi’s furniture design, often built in, throughout the house. Most prominent is an enormous, sculptural table shaped like a ship’s hull and centered in the dining room like a work of art. For the primary bedroom, Noguchi designed retractable bedside tables as well as a sinuous built-in desk that mimics the coastline it overlooks.

Outside, the property is dotted with pines and cedars. Footpaths connect the eastern side of the house to the sleeping cabins, which were left intact and have been restored as guesthouses. A vegetable garden is planted on top of a bomb shelter, a reminder that this timeless house was designed in the 1940s. The main house is situated in front of a small rock and sand cove, and a long dock juts out from the northeast edge of the property. These days, Cygnet, an International One Design sailboat built in 1937 and owned and raced by Jean Burden, is moored there.

In 1996 Ordway Burden, the youngest of William and Margaret Burden’s four sons, and his wife, Jean, inherited Sea Change. However, shortly thereafter, in 1999, it tragically burned to the ground. Having spent almost every summer of his life there, Ordway felt deeply connected to the house, and Jean, who had studied architecture, had been in awe of Harrison and Noguchi’s collaboration. “The place was part of the family’s DNA,” she says. Over the course of six years, Jean Burden set about rebuilding it, guided by the research of Elizabeth Dean Hermann, an architectural historian, who—thankfully—had been studying the house, and the photographs of Elizabeth’s husband, architect Heinrich Hermann. “I thought I understood the genetic code of the building,” Heinrich said.

Heinrich and Ordway and Jean worked with contractor Dan McGraw of Atlantic Builders; sculptor and woodworker Mark Loftus, who recreated Noguchi’s now-famous dining table; and master woodworker Jim Robinson, who painstakingly reproduced every curve of the living/dining room’s ceiling. Meanwhile, Jean and Heinrich tracked down certain obscure materials, such as wall panels of Weldtex, a textured plywood that also had been used in Radio City Music Hall. Those who have visited both the original house and the renovated version cannot tell the difference between them, a testament to Jean Burden’s singular determination to preserve a timeless design. In 2009 the house was listed on the National Register of Historic Places, noting its exceptional modern architecture and highlighting it as a rare Harrison and Noguchi design outside of New York. 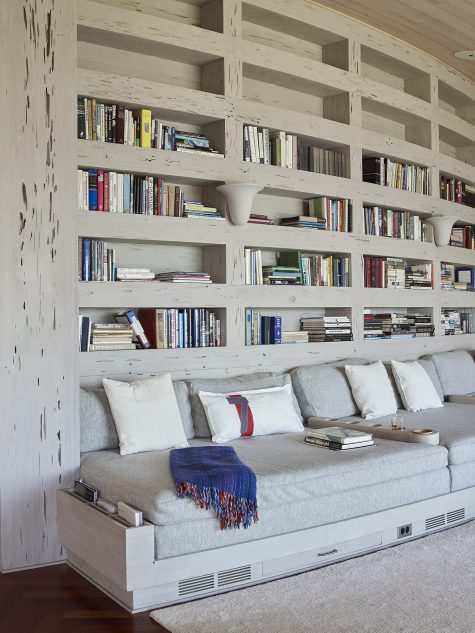 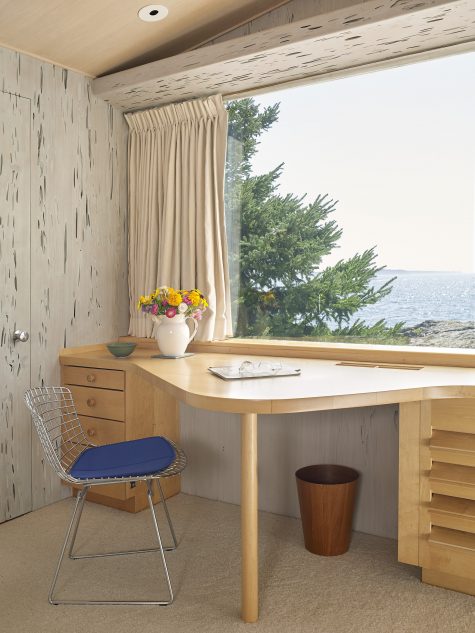 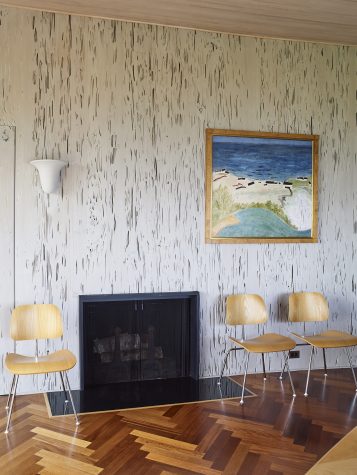 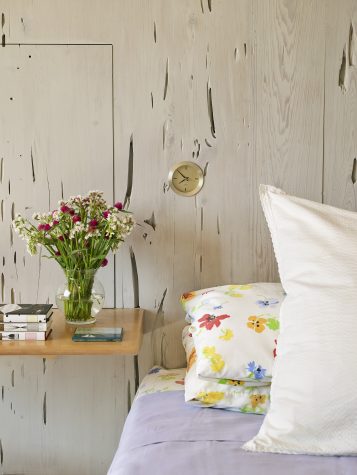 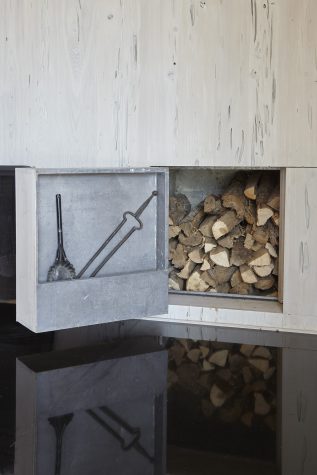 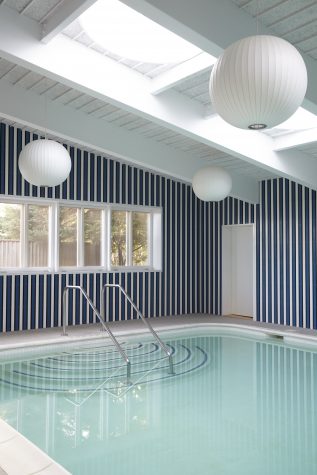