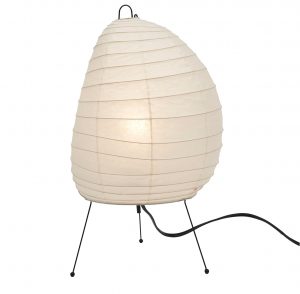 Japanese American artist and designer Isamu Noguchi is known for having many talents: he created renowned outdoor plazas, gardens, sculptures, lighting, furniture, and interiors. It seems fitting to include some background about one of his most beloved designs in this issue (read more about Noguchi in this feature about a home he designed in downeast Maine). Noguchi studied under the likes of Constantin Brancusi, but unlike some of his famous contemporaries he also made functional sculpture, like the Akari lantern.

The story goes that, while en route to Hiroshima in 1951, Noguchi visited the town of Gifu, Japan, known for its lanterns and umbrellas manufactured from mulberry bark paper and bamboo. While there he witnessed a fishing festival along the Nagara River, with boats illuminated by paper lanterns called chochin. At this point in time, the lantern industry in Gifu had already been diluted by the widespread production of cheap knockoffs, and Gifu versions were mostly being used as decorations or as a medium for advertising. During his visit Noguchi spoke with the mayor and was offered a commission to help revitalize the lantern industry in Gifu.

Noguchi designed the first of his lanterns using the timehonored Gifu methods of construction but substituting an incandescent lightbulb for the traditional candle, to make it more modern. He called them Akari, a term meaning “light,” as in illumination but also referencing the physical lightness of the pieces. Akari lighting continues to be made in Gifu at the Ozeki and Company workshop and is distributed exclusively by the Isamu Noguchi Foundation and Garden Museum.

Akari construction begins with making washi paper from the inner bark of the mulberry tree by hand. Next, bamboo ribbing is stretched across a sculptural wood mold designed by Noguchi. Then the washi paper is cut into strips and glued onto both sides of the framework. Finally, when the glue has dried completely and the shape is set, the internal wooden mold is disassembled and removed to be reused. The result is a delicate looking but resilient paper form that can be collapsed and packed flat in boxes developed especially for the luminaires.

The warm glow of light produced by an Akari has been admired for years. It brings a modern warmth that many companies, including IKEA, have attempted to replicate. An authentic Akari takes hours to make and can be authenticated by its stamped red sun-and-moon logo. Noguchi continued to visit the Ozeki workshop in Gifu throughout his life until his death in 1988, creating more than 100 models of Akari ranging in size from 24 to 240 centimeters. “All that you require to start a home are a room, a tatami, and Akari,” said Noguchi.