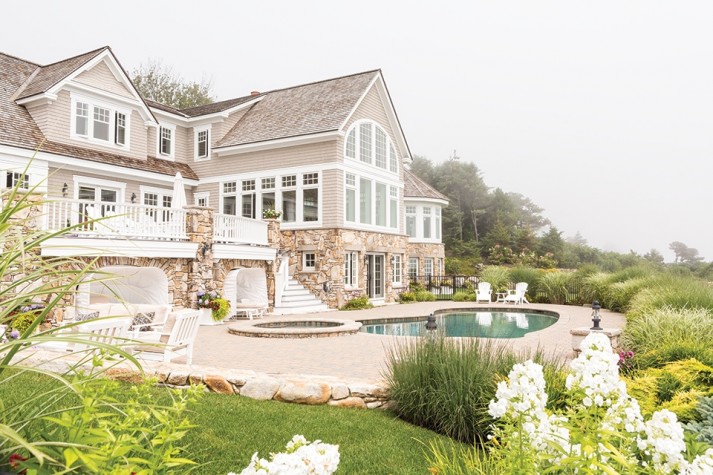 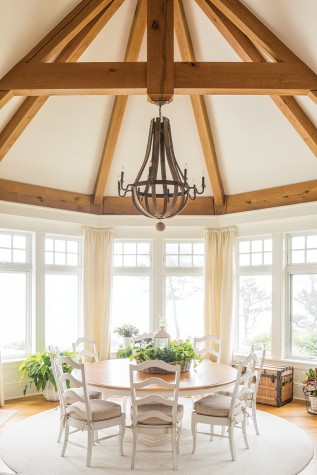 The architects used varying ceiling treatments, including exposed oak beams in the sunroom, to create drama and distinguish formal and casual zones. Here, a Restoration Hardware chandelier, made with strips of oak and metal salvaged from wine barrels, enhances the rustic- relaxed feeling. Jeanne Hanlon Interiors in Amherst, New Hampshire, made all the draperies in the home. 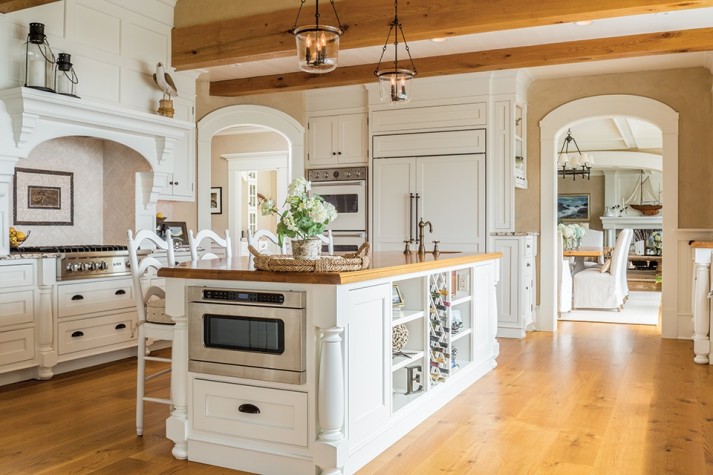 The long, wide-plank oak countertops in the kitchen were made by a former door manufacturer in East Waterboro that the Eriksons purchased in 2011. They now use the facility to create counters and other furnishings for their wood products line, Eport. Flat-paneled cabinets interspersed with columns and corbels—the work of Sylco Cabinetry in East Waterboro—reference the architecture in the living-dining areas. The oak flooring is from Carlisle Wide Plank Floors in Stoddard, New Hampshire. 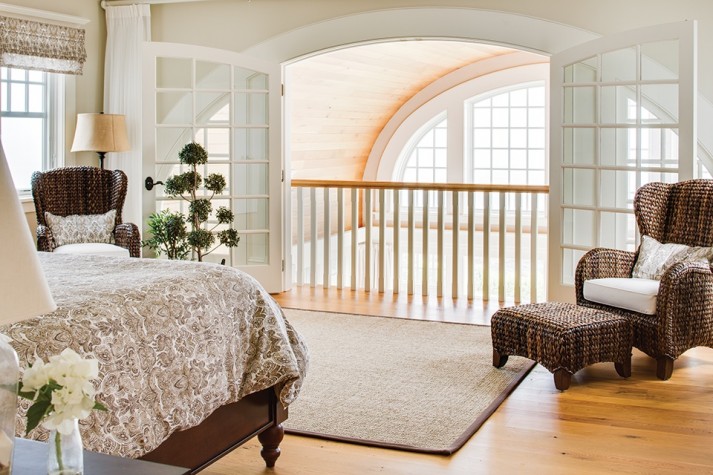 Rather than close off this guest room when they put on the addition in front, the Eriksons opted to install French doors and a balcony, giving visitors a measure of privacy while preserving the view. The seagrass armchairs and mahogany-stained bed are from Pottery Barn. 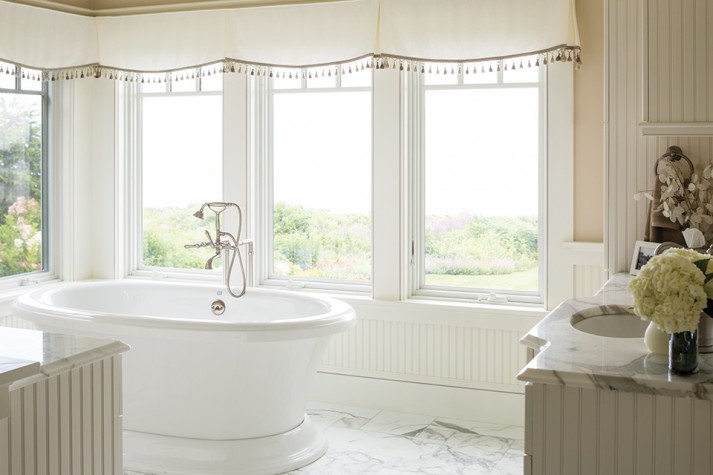 Carolyn collaborated with Artistic Tile in Nashua, New Hampshire, on the design of the owners’ bathroom, which includes Carrara marble surfaces, his-and-hers sinks, and a soaking tub. 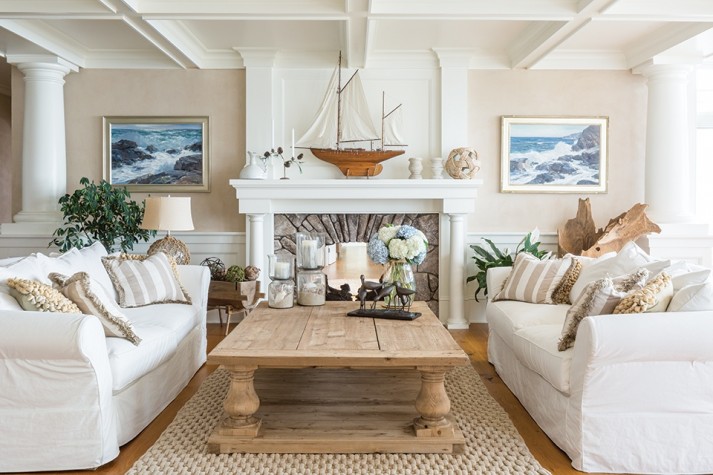 The living room fireplace, crafted from weathered granite that appears to be plucked from the Dale Ratcliff oils on the wall, also services a sitting room off the owners’ suite. The Eriksons purchased the paintings, and several others in the home, from Landmark Gallery in Kennebunkport. The slipcovered sofas and pine coffee table are from Restoration Hardware. 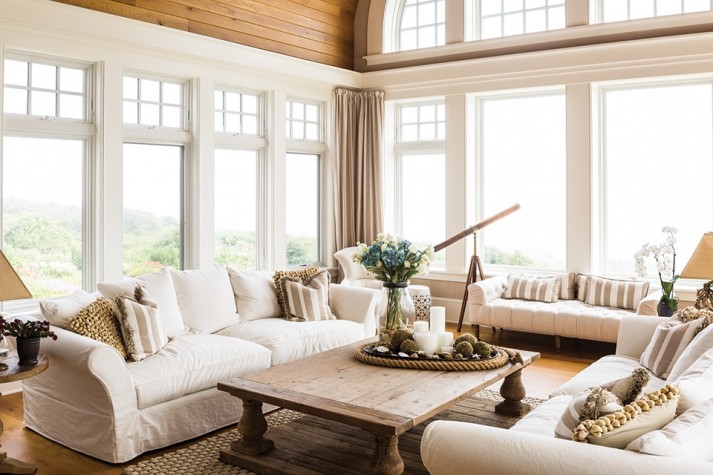 The same core furnishings appear on the fireplace and water side of the living area, creating a quiet, cohesive scene that allows the view to do most of the “talking.” 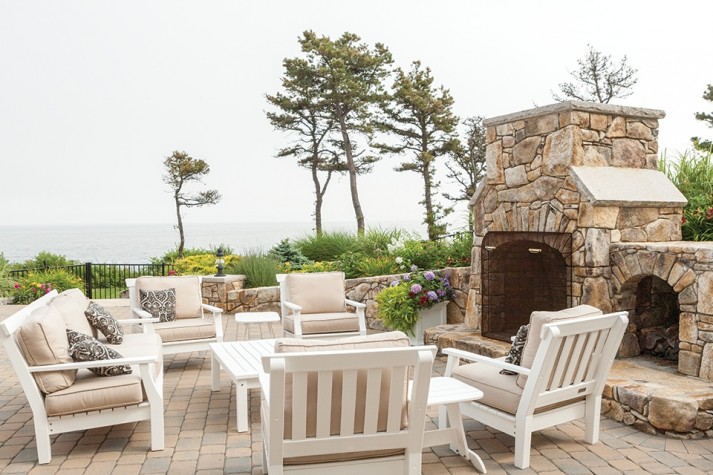 Salty air “pulls the iron out of stone,” giving the exterior masonry a reddish cast, says Thompson; the patio furnishings are from Seaside Casual Furniture. 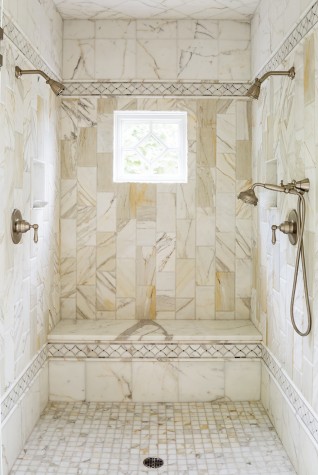 A Chippendale-style bench from L.L.Bean plays off the diamond-patterned windowpanes on the side-entry porch. 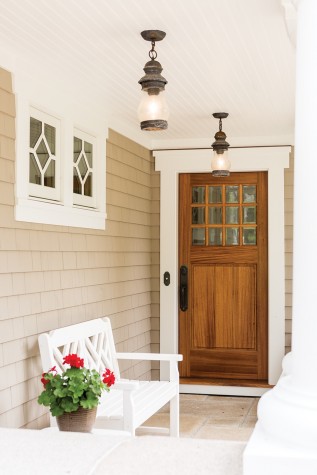 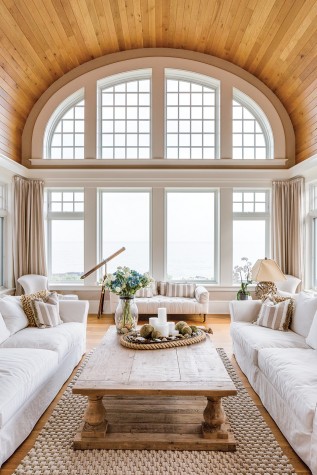 Outside the waterfront living room on a foggy day, a veil of mist blends beautifully with the whitewashed palette. 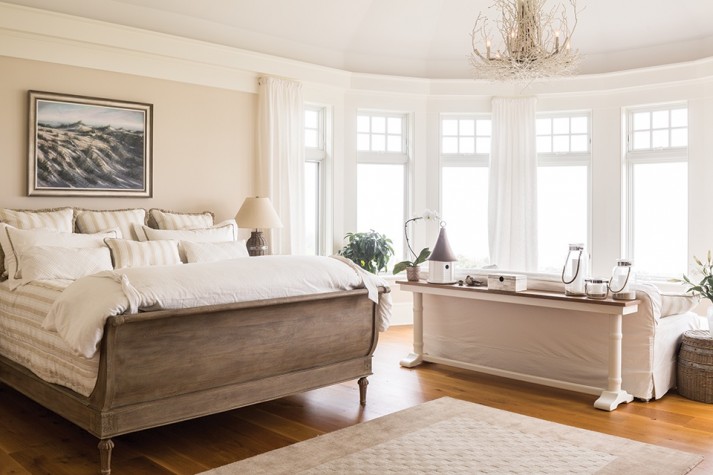 The owners’ bedroom features a reproduction American Empire sleigh bed from Restoration Hardware, a Gerald Robillard seascape, and a twig chandelier from Deanna Wish Designs, which Carolyn had painted. 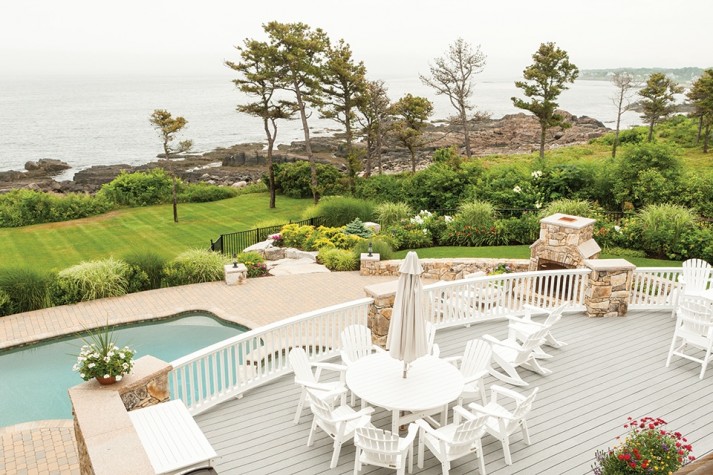 A curved bed of Saybrook gold juniper, Stella de Oro daylilies, fountain grass, and David phlox, planted by Patten Grounds Care in Ogunquit, follows the shape of the patio and porch; a mix of maiden and zebra grasses and summersweet soften the pavers around the pool. The deck furnishings are from Seaside Casual Furniture.

A TRIUMPH OF CRAFTSMANSHIP IN CAPE NEDDICK

Almost everywhere you wander in Carolyn and Ken Erikson’s Cape Neddick home the view looms—a sweeping, Rothkoesque composition framed in room after room. Long banks of southeast-facing windows divide bands of wide-open sea and sky into multipaneled “works”; focus in on the boundary between the blues and you can imagine your gaze traveling all the way to the western Sahara. When you’re not looking out, your eyes are drawn up to the exposed-beam turret in the sunroom, the elaborately molded coffers that crisscross through the living and dining rooms, and the soaring, oak-paneled barrel ceiling that crowns an adjacent sitting area. “Given the site, and our taste, we weren’t going to do a simple house,” says Ken. They wanted a house, in other words, with bold yet elegant details worthy of the masterpiece outside.

The New Hampshire couple was introduced to this stretch of the southern coast 35 years ago by Ken’s aunt, who stayed at the Terrace by the Sea in Ogunquit every summer. “She’d have us over in the afternoons for ginger ale and Saltines on the porch and we’d look at the ocean; we loved it,” says Carolyn. They returned later with their two sons and eventually bought and renovated a ranch-style home in Cape Neddick. When they began thinking about a place to retire, downsizing didn’t enter the equation. Instead, they sought a larger property that could easily accommodate their kids, grandkids, and other overnight guests, as well as some serious parties.

The five acres they purchased in 2008 featured a moderately sized, tri-gabled home with plenty of expansion potential and That View—a chameleon of sorts at the Eriksons’ events. Last year, they hosted a 70-person Christmas party against a backdrop of white-capped cobalt blue; the following August, 100 guests gathered in the front yard before a half- moon of waveless azure water for a birthday-anniversary celebration. “Our friends and family members always want to be here now, rather than at our other house,” says Carolyn. She and Ken share that sentiment and plan to move to Maine permanently in a few years.

Starting with a sketch Ken, a former structural engineer, drew, the couple worked with Paul Gosselin and Rob Freedman of Salmon Falls Architecture in Biddeford to expand the existing home in every direction. Kennebunkport contractor Tim Spang facilitated the proverbial phoenix act, taking the old place down to the studs and building anew. “Bulldozing would have been easier, but our approach allowed us to salvage a lot of material,” he says. The gable triad on the front façade is now flanked by a pair of additions punctuated with turrets—“bookends,” says Gosselin, “that contain the lengthy structure and anchor it on the ledge.” The central gable was pushed out 20 feet, creating the main focal point and, inside, a dramatic, light-filled living area. Gazing out from the barrel-ceilinged space, with water swirling through the windows on three sides, you feel like you’re on board a magnificent ship moored in a secluded cove. On the back side of the house, the team transformed an attached garage into a guestroom and entryway and reconfigured the roofline. Shed dormers bring airiness to an interior stairwell and a gabled guest room; a windowed turret in Ken’s office completes the architects’ trifecta.

The Eriksons wanted a shingle-style aesthetic, a specialty of Salmon Falls. Telltale signs of the genre include the home’s clever arrangement of arcs and peaks encased in cedar shingles, yes, but also masonry on the lower level. The expansive front porch, rounded like a Roman arch, is another hallmark, as are the bands of windows, here rendered in a range of combinations—from doubles to a wraparound bank of 14 in the living area. The architects incorporated “flares,” where the shingles curve out over the stonework, creating shadows that “break up the mass of the building,” says Freedman, who took the lead on the project. Wavy-edged shingles give the gable walls an undulating, three-dimensional look. Part of the home’s artistry, however, is in its restraint: “There are so many shingle-style details to choose from—you have to edit carefully to avoid what we call ‘an everything but the kitchen sink house,’” says Gosselin.

Inside, the whitewashed coffered ceiling in the living/dining space gives way to exposed oak beams in the kitchen and king-post trusses, also of oak, in the turreted sunroom. Pedestaled Tuscan columns stationed around the seating areas in the living room, flat-paneled wainscoting, and six- to eight-inch-wide trim embellished with crown moulding creates an artful geometry on the walls. “The large scale of the woodwork is important, given the size of the house, and really plays into the richness,” says Freedman. Freeform fieldstone fireplaces, crafted by Ryan Thompson Masonry in York, work with the natural timbers to keep things cottagey.

Portsmouth, New Hampshire, interior designer Lisa Teague covered the walls in the primary rooms in a clay-plaster finish. Topped with Benjamin Moore’s Nantucket Sand paint, they have the depth, and precise coloring, of a beachscape. Carolyn, also an interior designer, used iterations of the same tone throughout the house, then layered on cloud-like pieces: slipcovered sofas and dining chairs, painted wood furniture, crisp linens. “Our other home is Tudor-style and very dark, so we were ready for a change,” she says. Ken designed more than a dozen of the home’s wood furnishings, including a whimsical curved bedframe and oak dining table with a basketweave motif, items that can now be found in the couple’s Portsmouth-based furniture line, Eport.

“We didn’t set out to launch a company—more like, we were enjoying the creative process and wanted to keep going,” he says.

The Eriksons entertain here almost every weekend in the summer. “Fifteen to twenty guests is our average range,” says Carolyn. “I don’t spend much time in the kitchen, but I’m good at ordering things.” (A sign next to the stove sums up her hosting philosophy: “Life’s too short to cook for other people.”) Overnight visitors can retreat to one of four guest suites located on all three levels, take dips in a hot tub and lagoon- shaped pool, and lounge in a pair of cabanas tucked into stone recesses beneath the porch. The pool deck leads to a lower-level recreation area with a sauna, exercise equipment, billiards and shuffleboard tables, and a lineup of three TVs, “so I, and anyone who shares my sports obsession, can watch golf, the Patriots, and the Giants at the same time,” says Ken. A counterpoint to the “man cave,” the owners’ spa-like bathroom on the main floor features a steam shower, pedicure footbath, and soaking tub with an ocean view. “We tried to think of everything we could want in a house because we don’t plan on doing this again,” says Carolyn.

Still, one thing remains on her wish list. “If my younger guy decides to settle down, I’d love to host a wedding here—wouldn’t it be beautiful?” she says, gesturing toward the late winter sapphire stripe filling the windows. No pressure, son, but she makes an excellent point.