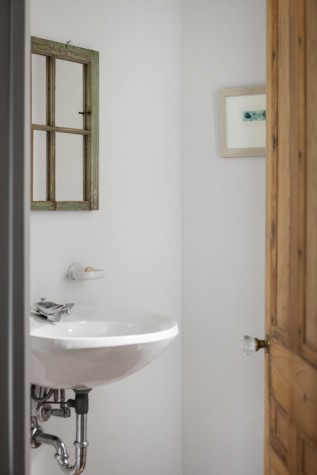 All the plumbing fixtures in the house, including this sink, were salvaged from a home in Weston, Massachusetts. 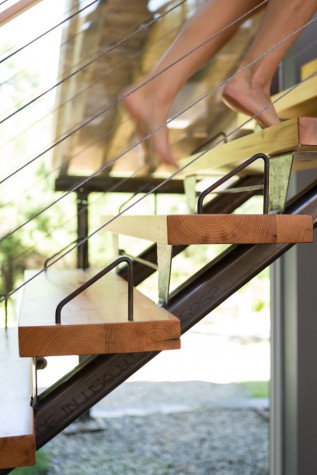 Neutral wall colors throughout the house draw the eye to the view outside, but there are a few pops of color inside, such as the blue kitchen cabinets (above). Several IKEA cabinets were combined and faced with salvaged pine for the kitchen island. The countertop is birch plywood. The kitchen stools are from Artas Designs in Biddeford. 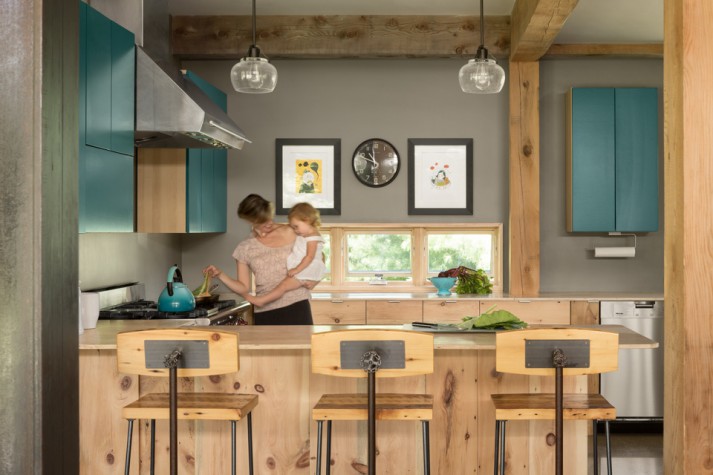 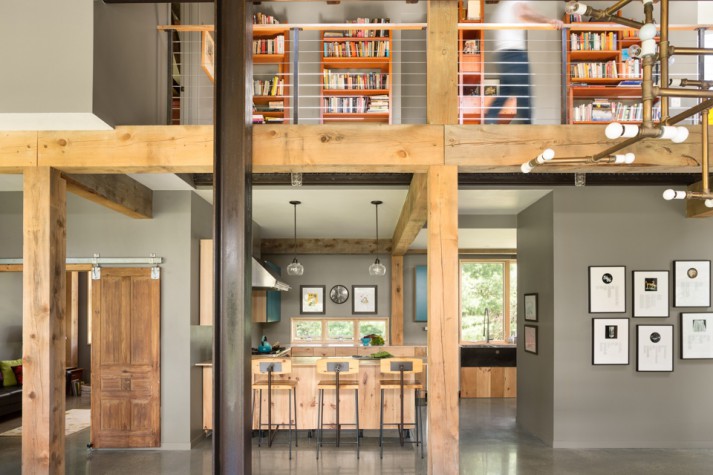 A view of the interior of the Benezra house, which incorporates aspects of the farmhouse that originally stood on the property with mid-century modern finds and new materials. The steel and hemlock posts are new. The chandelier made with brass pipe fittings and the bookcases on the bridge were likely built in the 1960s. The sliding door at the left came out of the original house. The neutral gray of the walls are meant to encourage the eyes to the windows. 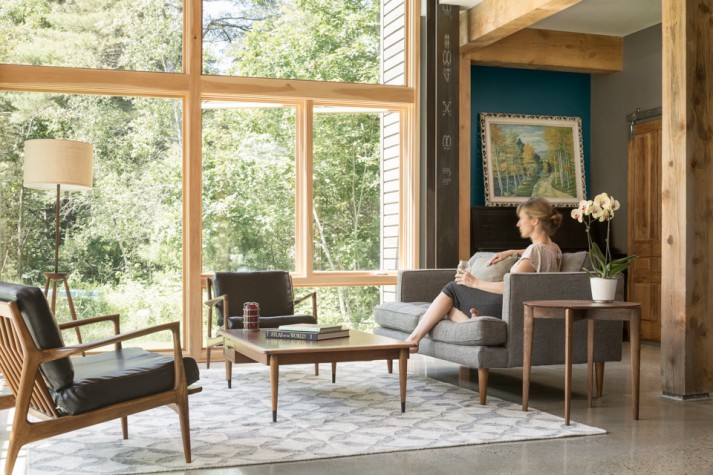 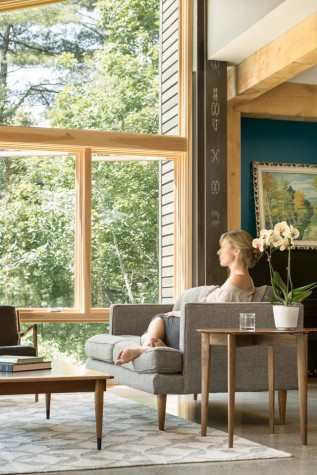 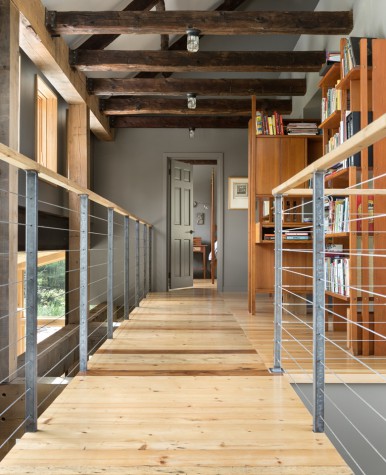 An interior bridge connects two portions of the home and showcases a variety of materials, including roof timbers salvaged from a nineteenth-century farmhouse, a custom bookcase salvaged from a 1960s home, and new materials like hemlock posts and cable railings. 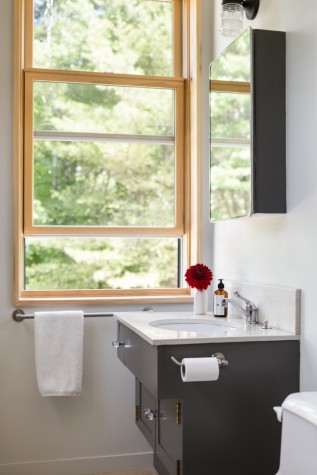 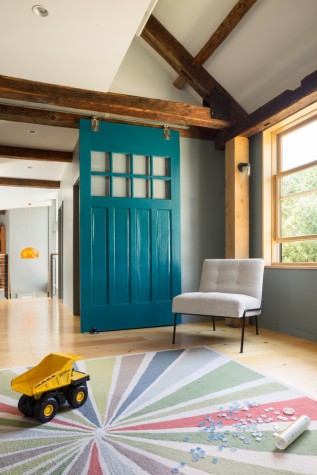 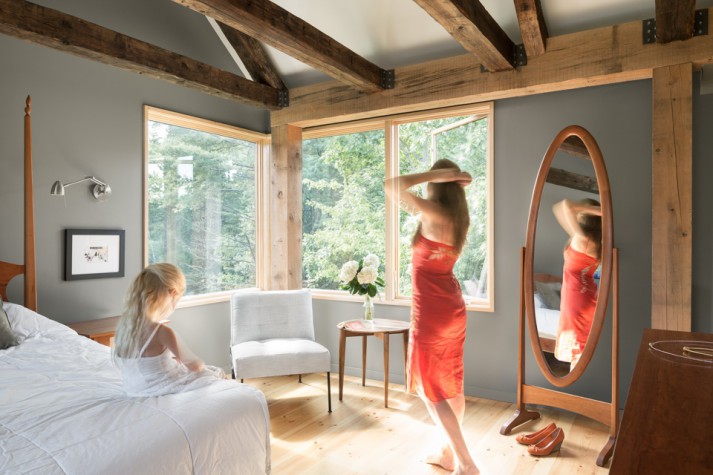 The master bedroom with salvaged roof timbers, new hemlock posts, a mirror by Furniture by Dovetail in Massachusetts, and a four-poster bed from Thomas Cummings Woodworks, also in Massachusetts. 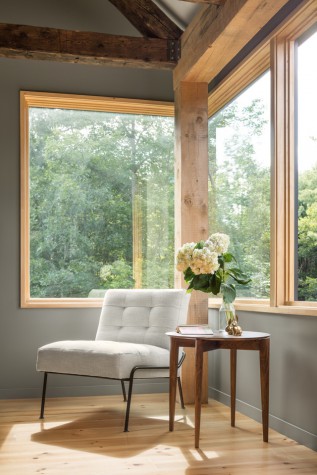 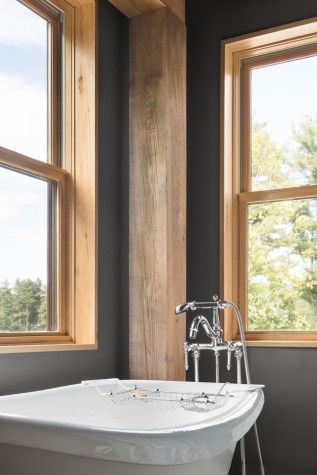 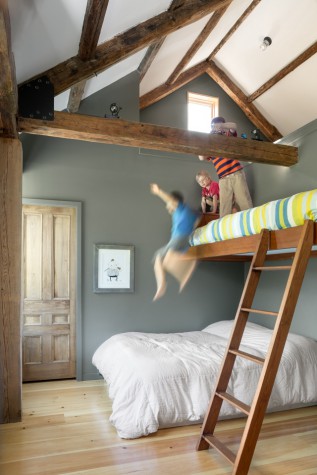 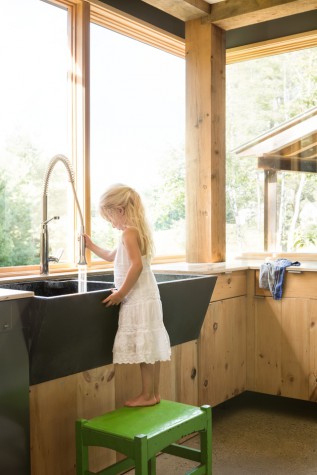 Caleb Johnson Architects and Builders designed kitchen windows around this soapstone laundry sink, which the homeowners found on Craigslist and repurposed as a kitchen sink. The surrounding IKEA cabinets are faced with pine salvaged from the farmhouse that once stood on the property. 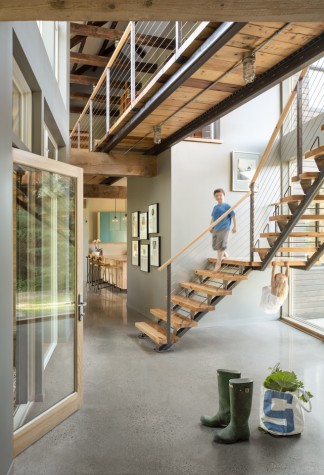 A view of the front entry’s polished concrete floor and stairwell with a staircase made of reclaimed wood, new steel risers, and a cable rail system. The bridge above spans between the two volumes of the house. Caleb Johnson wanted the house to always express its own structure, so beams and posts throughout the house (whether salvaged, new hemlock, or steel) are visible. Other elements like the electric conduits going to the light fixtures are also purposely highlighted. 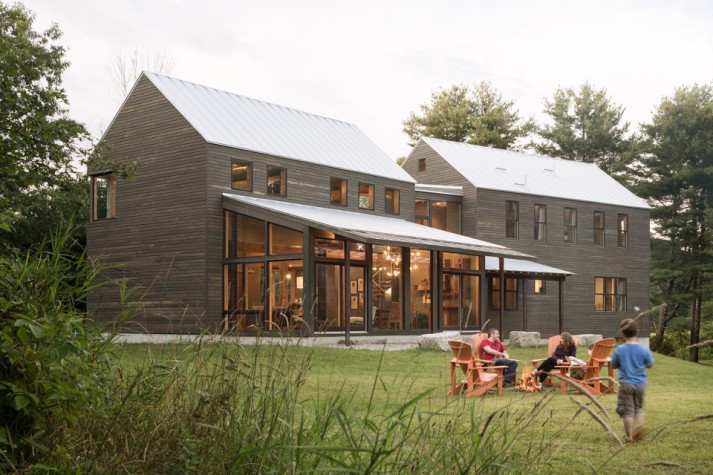 Two nineteenth-century gable roofs (now covered with standing-seam metal roofs) determined the volumes of the colonial-inspired forms that make up this house. Under the shed roof, a glassed-in bump-out encloses the great room. The stone slabs that serve as benches around the gravel drainage bed came from the foundation of the farmhouse that once stood on this property. 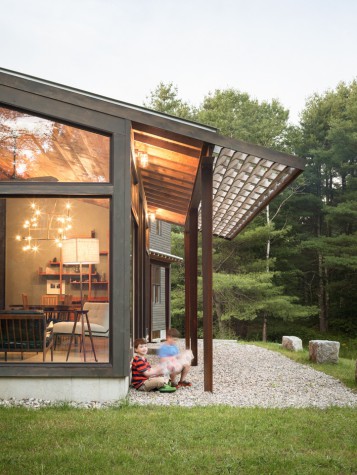 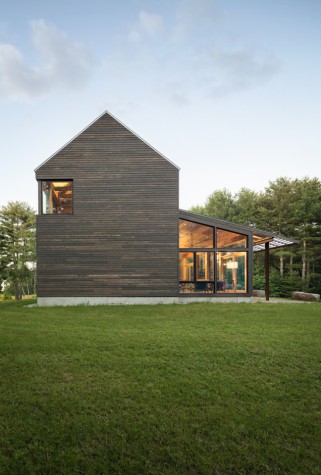 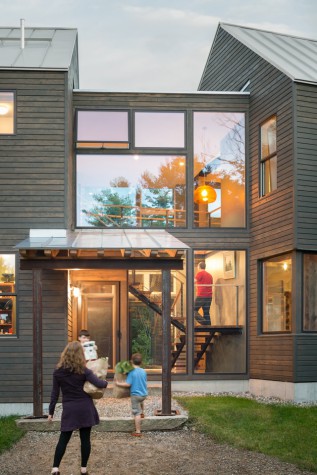 A glass connector joins the two buildings that form the house. The portico’s steel posts and beams will patina over time. 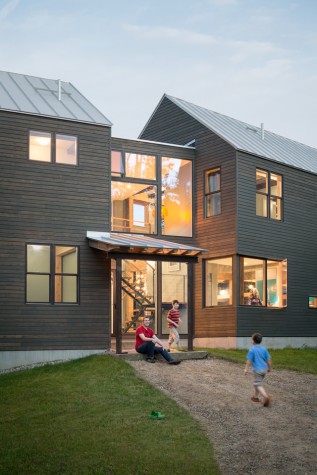 Scott Benezra is a whiz with Craigslist. Worthless deals begone. He has an eye, a knack, a gift. Hard work? Luck? A cyber sixth sense? When he and his wife, Karen, were building a home in Kennebunk, Scott’s Craigslist sleuthing led him to a massive 100-year-old soapstone sink, a soaking tub that usually sells for $10,000, Italian stone flooring, and a Wolf stove from one seller and matching hood from another seller. For a refrigerator, Scott visited a house in Weston, Massachusetts. It was a routine Craigslist interaction: the trip to examine and possibly buy what you’ve seen online. Only it turned out the Weston house was no ordinary house but a midcentury treasure with one-of-a-kind built-ins, furniture, and lighting, including a light fixture built out of brass pipe fittings, a crossword- puzzle-shaped shelving unit, and a zigzag dining room table that incorporated brass pipes with votive candles. Later, when Karen saw the piece, she imagined a worrisome event for a guest with bouffant hair.

The Weston house had been built by (and also at one point occupied by) maverick architect Maurice Smith, a longtime professor at the MIT School of Architecture and Planning. Laura Spark—a former student of Smith’s and former deputy director of Massachusetts Association for Community Action— says, “Smith is a legend at MIT, known for schooling generations of architects in his design philosophy, an anti-modernist belief in architecture as ‘built collage.’ Smith builds are complex assemblages, rigorously ordered according to Smith’s dictates about dimensions, materials, and the organization of spaces.” Only, in 2013, new owners of the Weston house wanted the land and not what stood on it. What did it matter that an architectural historian might consider this a travesty? The house was slated to be razed.

What is going to happen to all of this stuff? Scott wondered as he looked around. It turns out what was going to happen to all of this stuff was that he and Karen were going to buy it, and buy it for a very reasonable price. With the help of a crew led by John Molligi of JFM Construction and Property Services of Sanford and a 26-foot box truck, the Benezras took the refrigerator they came for, as well as bookcases, a two-sided desk, a built-in bunkbed, a dining room set, kitchen cabinets, lighting, plumbing fixtures, wood ceilings, medicine cabinets, and bathroom vanities. They even took the toilets, although those were of a more modern vintage. The group who was instrumental in making the sale—and who had originally placed the ad in Craigslist—was GreenGoat, a Somerville- based organization whose goal is to save, as they put it in their mission statement, “otherwise discarded building materials and find new projects that need those materials.”

Once the various items arrived in Kennebunk, Caleb Johnson and his team at Caleb Johnson Architects and Builders in Biddeford had an unusual challenge. How could they integrate this material with what they already had and create an of-the- moment contemporary house? And what the team already had was, by no means, a blank slate, since the Benezras had started their building project by salvaging bits of a different architectural treasure: a nineteenth-century farmhouse of enough significance that Thomas Hubka devoted a chapter to it in Big House, Little House, Back House, Barn, his seminal book on the connected farmhouses of nineteenth-century New England. (Even if the term is unfamiliar to you, if you’ve driven around rural Maine, you’ve seen these connected farmhouses, which were typically built up over time, and in the order that Hubka’s title suggests.)

To rewind the clock a bit: in 2010 the Benezras bought a piece of property in West Kennebunk that had a dilapidated farmhouse. They couldn’t restore it, so they dismantled it, saving what wood they could, including the sheathing, timbers, and two timber-framed roof structures, one of which belonged to the main house, the other to an ancillary structure called the woodshed, though it was actually quite large. The farmhouse was set by the road, as was customary in the nineteenth century, and as the project got underway, people stopped by to offer their memories. “I used to be a babysitter here,” one person said. Another told them how many cows used to be in the barn. Still another remembered that there had been a fallout shelter in the basement. (And there was.)

What were Johnson and his team to do with midcentury accoutrements and nineteenth-century bones? Give them an untraditional wedding, it turns out, marrying the old and modern with the contemporary in a house that announces, at all times, its own contrasts. They let the existing roof frames determine the volumes of the new house, designing two colonial-shaped buildings—one that fits below one roof frame, one that fits below the other—and joining them with a super- contemporary glass connector. Then they extended one of the traditional colonial forms with a shed roof that expands the great room and added floor-to-ceiling external glass walls that take advantage of the southern exposures in winter (and stay cool with solar shades in the summer).

Everything old is made new in the house, not by transforming it—the wood was put through a planer (another Craigslist find) but still has its patina, old nail holes, and nicks— but by showcasing it alongside contemporary materials and forms. “There is a tremendous spread of materials that ends up working well together,” Scott says. The original pine was used for many floors, the great room ceiling, and kitchen cabinet faces. Original beams are visible throughout the house. But the great room floor is a polished concrete, and the supporting beams are of new hemlock or steel. An open staircase of project architect Josh Brockman’s design combines reclaimed-timber stair treads, new steel risers, and a cable rail system.

Johnson liked the challenge of the project, of using “the story, texture, and patina” of the previous houses in the new design. Sometimes, Johnson said, the item that was being recycled had “a lot of texture and business,” and the goal was to put it “against something new and modern that would not compete with it but just be a backdrop for it.” At other times, the challenge was simply fitting a piece to a space, as with the Weston house bunkbed. The team had to add an additional wall to make the built-in work in the bedroom of one of the Benezras’ sons. The bed now functions as a stepping stone to a high loft that has a secret door (made out of a bookcase from the Weston house). The door leads to the Benezras’ other son’s loft and bedroom. The house’s doorframes (and also the hallways) had to be configured around doors that were salvaged. The original farmhouse doors were treated with linseed oil and, in one case, placed on a sliding rail system. As the doorframes were dictated by the doors, so the owners’ bathroom design became oriented around the soaking tub and the kitchen windows were fitted to the soapstone sink, which is massive because it was originally a laundry sink.

Many of the walls in the home are gray, as is the exterior, which is eastern white cedar shiplap with a custom profile that Johnson had fabricated by Yoder’s Sawmill in Corinna. On the interior, the gray focuses your gaze on what is outside the window, although there are pops of bright blue on the upper cabinets of the kitchen and in the great room that grab your attention.

Karen, an osteopath, sees connections among all the disparate sources of the home. When she learned a little bit about Maurice Smith, she was “struck by the similarity of his house’s concepts with our design construction. I like the idea of celebrating the discarded out-of-fashion pieces and using them in a spontaneous way that is new and beautiful.” One additional example might be the old farmhouse’s foundation, some of the stones of which now serve as exterior benches. Beyond the Weston pieces, the house has some midcentury modern furniture from Karen’s family. Still, neither she nor her husband nor Johnson wanted the house to look like a hodgepodge. “We stuck to the mantra of ‘form following function,’” she says. “It’s a very osteopathic way to look at the body, and can be translated to how you house yourself.” Maybe not a Maurice Smith idea. (“The modernists! No!”) Nor a nineteenth-century idea. (“Let’s put this thing up and keep warm.”) But it is certainly in keeping with the Benezra house: a stylish, textured space for twenty-first-century life.