Sitting on Top of the Bay 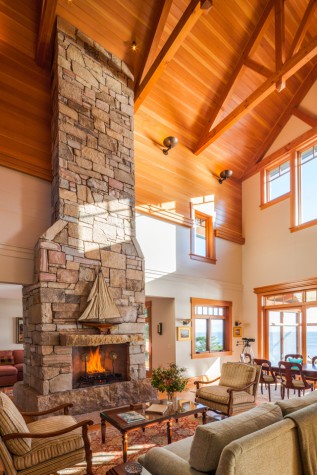 A massive granite chimney, assembled by G.M. Libby and Sons Masonry, extends through the living room ceiling to the master bedroom above. Rockport Post and Beam fabricated the Douglas fir trusses, which are juxtaposed with elegant furnishings, including a pair of Louis XIII–style Minton-Spidell armchairs covered in Kravet fabric and a carved wood coffee table from Somerset Bay Home. 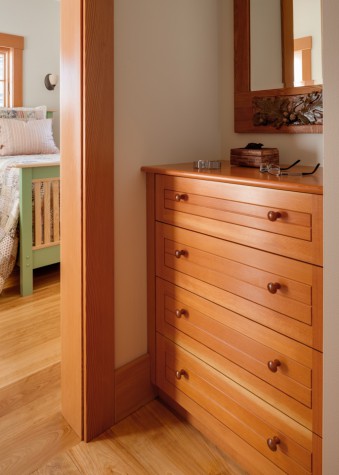 A built-in fir bureau, crafted by Bench Dogs in Rockland, is tucked into a tiny hallway between a guest bedroom and its en suite bathroom. 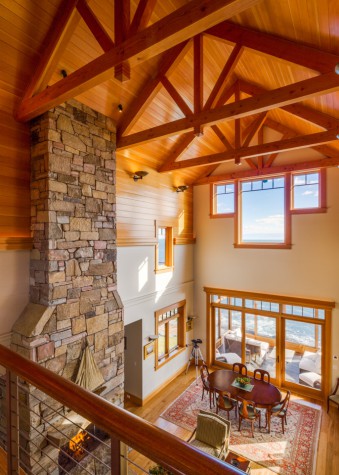 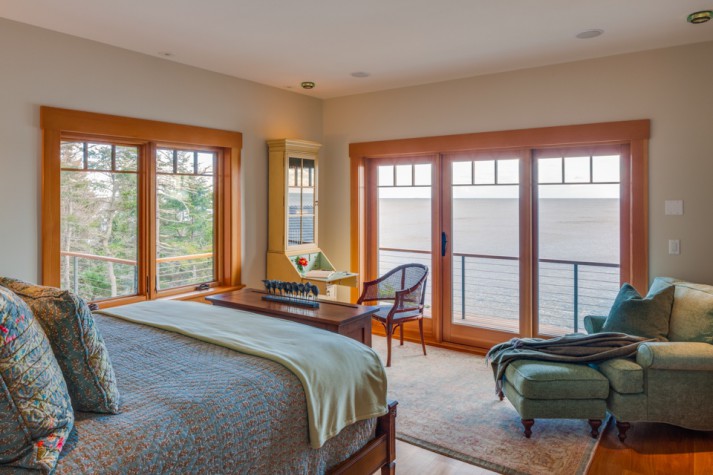 In the owners’ bedroom, gray-blues and greens reflect the many shades of the sea. The Afghan carpet is from Araby Rug Galleries in Falmouth; the armchair and ottoman are from Lee Industries and feature chenille Kravet fabric. A crème brûlée-colored secretary from Somerset Bay Home enlivens the palette, and the glass front aggrandizes the view. 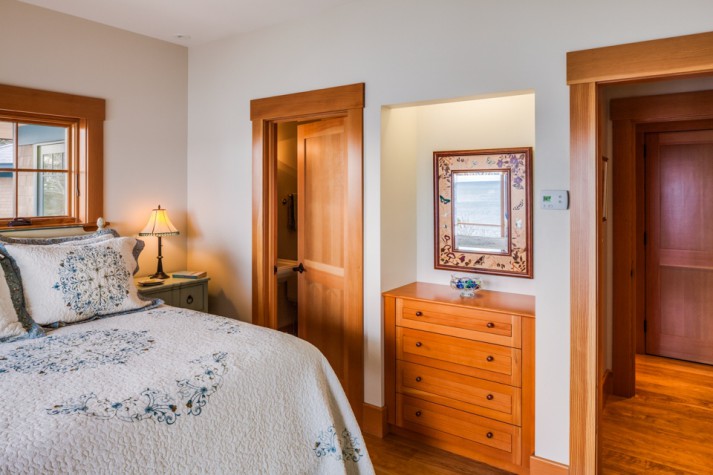 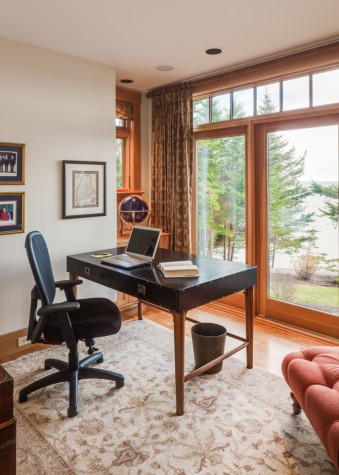 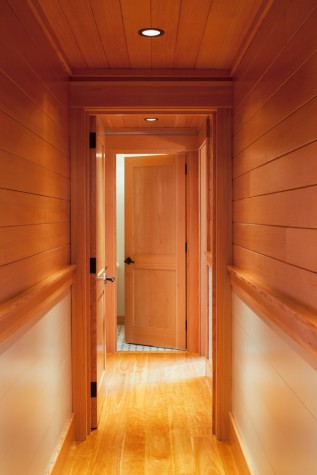 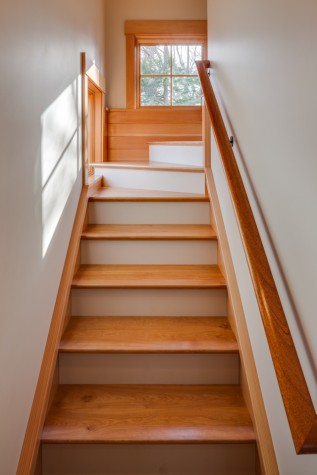 A guesthouse staircase with a mahogany railing and red birch treads 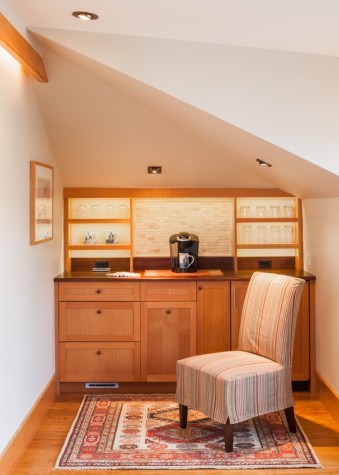 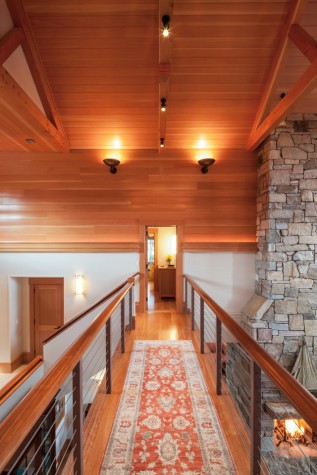 A bridge, lined with a mahogany-topped cable railing, that spans 16 feet between second-floor bedrooms 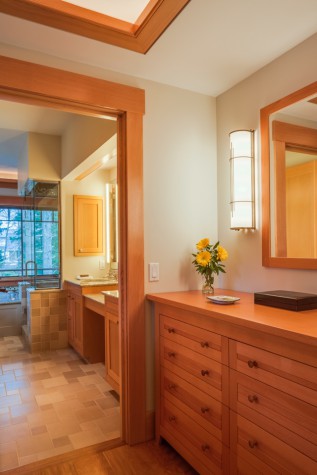 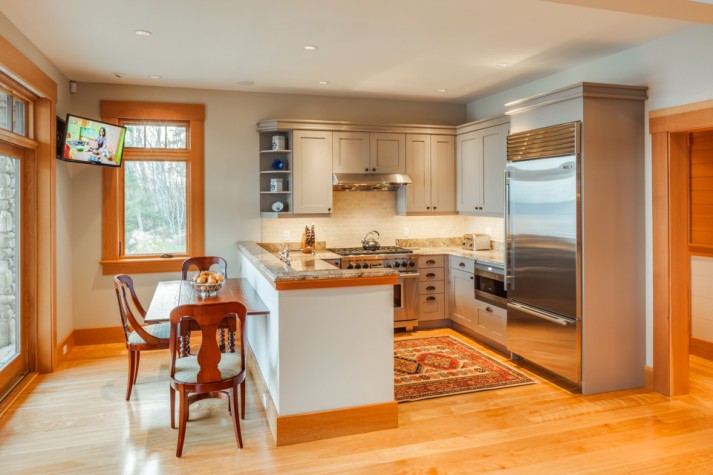 Driftwood-colored cabinetry from Dream Kitchen Studio in Rockland and Juparana Tier granite counters from Morningstar Stone and Tile in Topsham set off the cook space. The recessed cabinet panels match those on the home’s interior doors and built-ins; Morris simply added 5 1/2-inch-wide crown molding to the upper cupboards to hide ductwork and create a custom look. 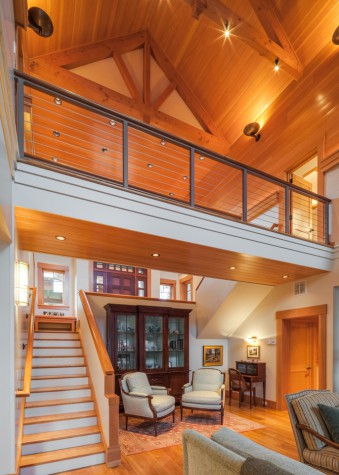 When you step through the mahogany front door, you can see beneath the bridge to the ocean on the far side. A Somerset Bay Home breakfront with a sky-blue interior plays on the pattern of the door’s transom and sidelights. The chairs and chenille Kravet sofa in the foreground are arranged on an Araby Rug Galleries Afghan carpet. 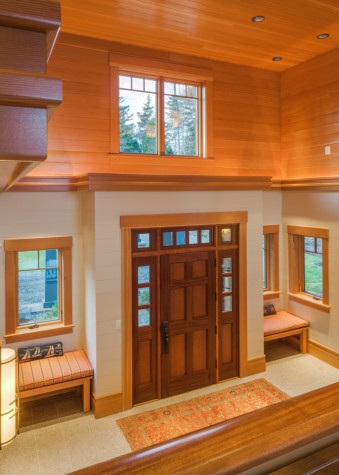 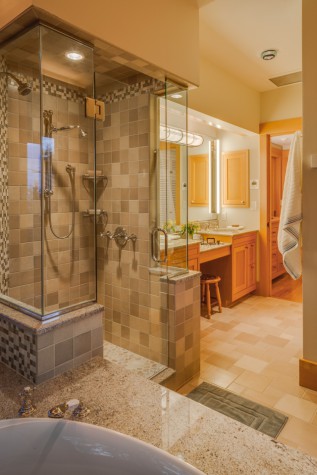 To energize the neutral scheme in the owners’ bathroom, Morris combined various-sized porcelain, travertine, and glass tile from Old Port Specialty Tile in Portland with an Ivory Fantasy granite bathtub surround from Morningstar Stone and Tile. 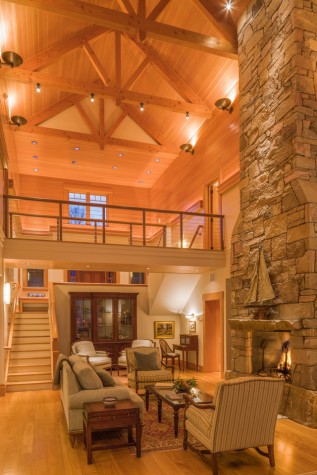 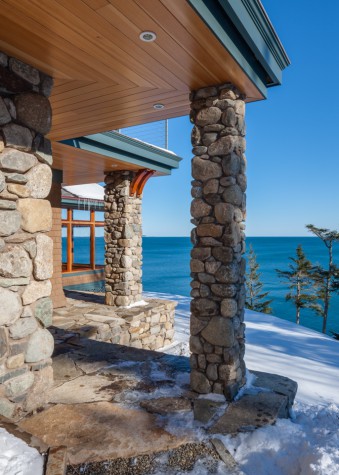 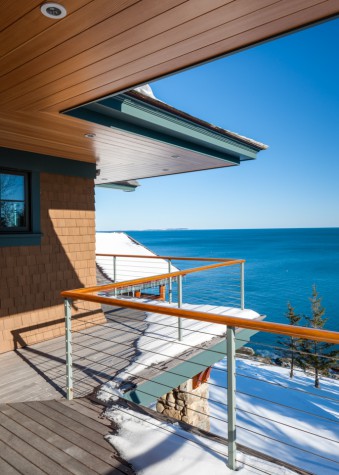 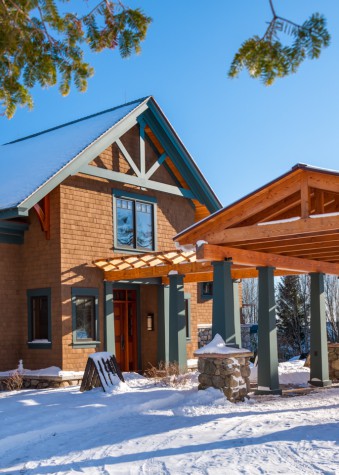 Exterior adornments such as a decorative truss and arched mahogany brackets hint at the finely detailed woodwork within. 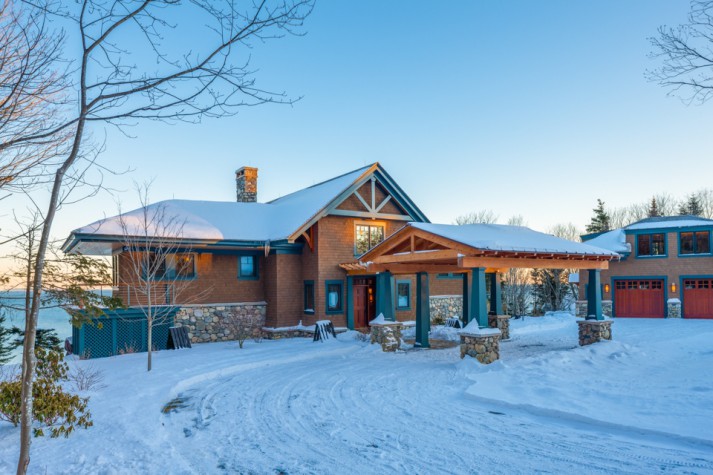 Blue-green trim and granite veneers link the home with the guesthouse-garage unit and porte-cochere, a signature of Camden architect John Morris’s designs. Over time, the buildings’ eastern white cedar shingles will weather to the shade of the stones. 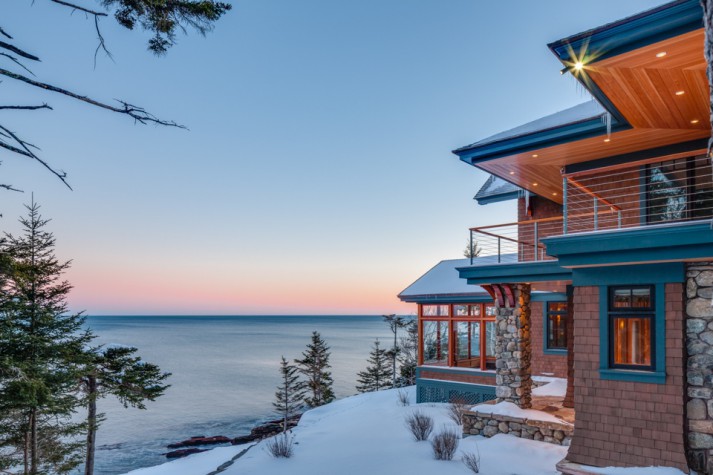 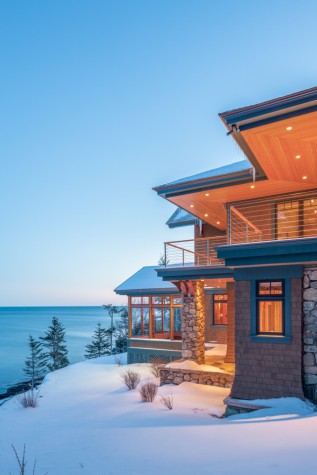 All was calm on the day this photo was taken, but during storms, the spray from the waves sometimes douses the screened porch, which is set back just 75 feet from the edge of the cliff. 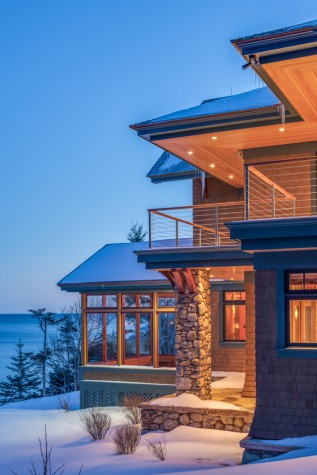 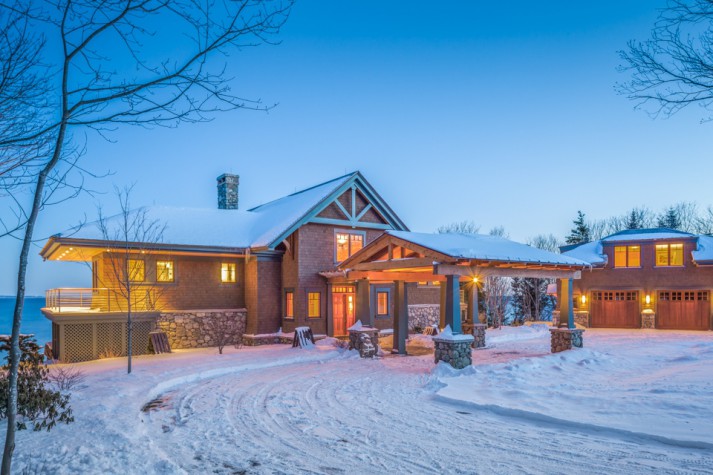 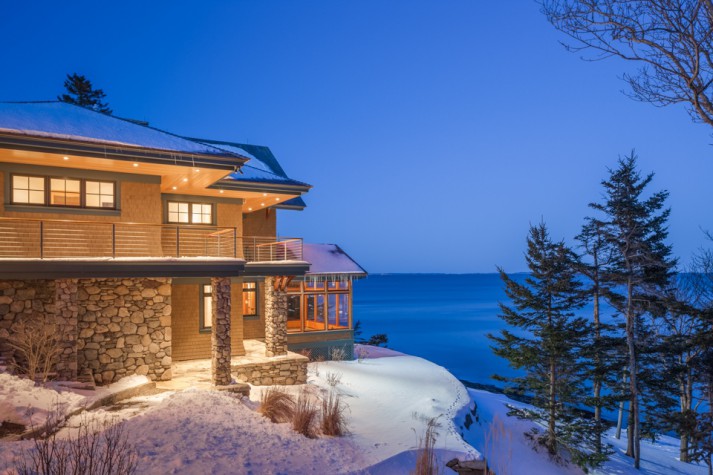 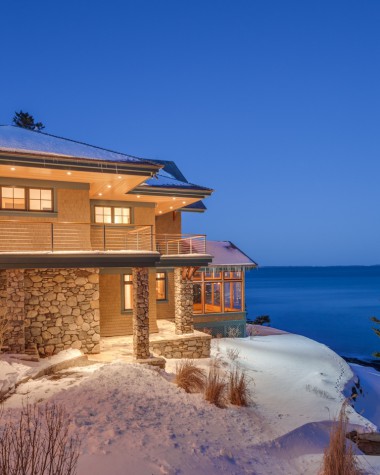 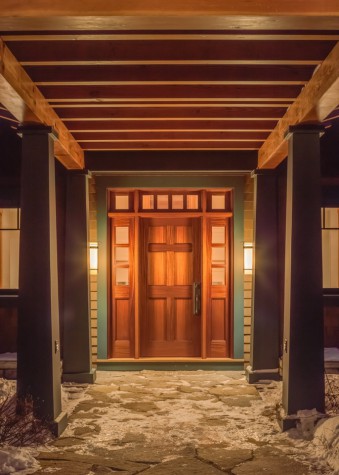 Nestled on a cliff overlooking Muscongus Bay, Bill and Eileen MacDonald’s New Harbor home serves as a theater for taking in the spectacle outside. The vast, timber-framed living area offers the “front-row seat” the owners asked Camden architect John Morris for: giant windows showcase the great arc of the Atlantic, stretching, largely uninterrupted, all the way to Africa. From the bridge that connects the bedrooms on the second floor, you get the “balcony” view—a wide swath of sky edged with stripes of land and sea, framed in a window Morris placed just so to capture the slope of Monhegan Island, 11 miles offshore. And on the screened porch, surrounded by water on three sides, you feel like you’re right on stage, a bit player in a performance starring seals, whales, gulls, and cormorants against a backdrop of foamy swells.

Nine years ago, the San Diego couple spent a month scouring the coast for a property on what they call “the bold ocean.” “We drove in and out of every town from Harpswell to the Canadian border,” says Bill, who, like Eileen, grew up in Massachusetts and had vacationed in Maine. “Eileen in particular loves the granite ledges and crashing waves, and we wanted a small-town feeling, not like the beach communities we have in Southern California.” They were close to purchasing another place when they discovered the New Harbor spot. “We walked around to the water side and finally saw the setting we’d envisioned,” says Eileen.

One thing that did not fit into the picture was the colonial that stood on the lot. “It was a real Rube Goldberg—an aggregation of an old home that was moved from Augusta, plus some 1960s wings that were tacked on later, creating a maze of small rooms,” says Morris. The columnar shape also made the structure, set back just 75 feet from the water, look like it was perched precariously on the bluff. Since the house and its contents were in decent condition, the couple decided to donate the building materials, appliances, and fixtures. “We put the word out through our realtor and offered people a window of time when they could come take what they wanted,” says Bill. “Now when we go to the local ice cream shop, we stand on a wood patio that used to be our back deck.”

The new Bold Ocean Cottage, as the owners refer to it, is designed like the terraced landscape, with the entryway at the top of the slope and the primary living spaces positioned in front and down a flight of stairs; the screened porch is another step down from the dining area. “The idea was to sink the home into the hill, so it feels integrated,” says Morris, who worked with project manager Carmel Ouellet of Morris Construction Services in Camden, an arm of the architect’s firm. Granite columns, footings, and veneers on the lower façades appear to grow out of the ledge, while cantilevered decks covered with six-foot-deep overhangs—“some of the biggest I’ve ever done,” says Ouellet— create strong horizontal lines that draw the eye across the site.

But when you step inside, your gaze turns skyward to the Douglas-fir-paneled cathedral ceiling studded with trusses that crowns the core of the home. On one wall, a double-sided granite fireplace set on a 14-ton, weathered monolith rises 28 feet to meet the triangular framing. A bridge trimmed with cable railing slices through the air overhead, creating a boundary between the foyer and a pair of seating areas in the living room, while allowing you to see through to the water on the opposite side. “If that structure wasn’t there, you’d have just one vacuous space,” says Morris. The overpass also separates the owners’ and guests’ suites on the second story, giving everyone a place to retreat to.

To warm up the soaring interior, Morris extended the honey- colored fir ceiling paneling a third of the way down the walls, which are painted in Benjamin Moore’s Winds Breath. The same cafe-au-lait hue is used throughout the house, with the exception of the kitchen, which is one shade darker (Cedar Cay) for a more intimate feeling. “They’re cozier colors than white, but still clean and easy to decorate around,” says Morris. Cove lighting tucked into a recess at the base of the boarding, and bowl-shaped bronze sconces placed beneath the trusses and over the artwork below, bounce amber beams off the timbers and walls, enveloping the space in an ambient glow.

The majority of woodwork in the house is custom designed by Morris and made by artisans, in keeping with the Arts and Crafts architectural philosophy he identifies with. “If you look at the stuff Greene and Greene and Gustav Stickley did, you see simple, bold wood elements done in a very purposeful way,” says Morris, referring to the early-twentieth-century architects and furniture manufacturer who espoused the Arts and Crafts aesthetic. The home’s wide, flat fir trim, crafted, along with the mahogany railings, by Ouellet’s team, has slightly rounded edges, bringing softness to the rooms. The rail caps have deep grooves where your fingers slide “so you get a good grab,” says Morris. And in the upstairs bedrooms and bathrooms, built-in fir cabinets, bureaus, and vanities, created by Bench Dogs in Rockland, help the owners maximize storage in close quarters.

Rich coral and brick reds in the home’s Afghan rugs “bring out the vibrancy of the woodwork,” says Newcastle interior decorator Carolyn Parker. In the living area, soft green upholstery and slender, dark wood furnishings create subtle contrast and an air of refinement, “like you’ve entered the captain’s quarters on a turn-of-the-century ship,” says Parker, who collaborated with Eileen to choose reproduction pieces in a mix of clean-lined and curvaceous silhouettes.

The MacDonalds spend six months out of the year here, including two weeks in the winter, and frequently host friends from California. “These are often people who have traveled the world, and we take them on lobster boat tours, to Shaw’s [Fish and Lobster Wharf restaurant] in Bristol, and into the little towns, and it’s this completely new experience—like being in a tiny fishing village in Ireland or Scotland,” says Bill. The owners recently completed a guesthouse-garage unit, which is ideal for families. “But couples prefer to stay in the main house with the private decks and proximity to the view,” says Eileen. “It’s nice to have a spot for everyone.”

When they’re on their own, the couple tends to hunker down in the first floor alcove or on the screened porch. Gazing out from the airy platform, you feel like you’re on the prow of a ship, gliding through the whitecaps with the lobster boats and ferries cruising to Monhegan and Nova Scotia. When the sea is really churned up, you might even feel the spray coming off the water, which prompted Morris to install a scupper-like drainage system in the walls. “I spend so much time out there, and yet, every time I look, I see something different in the waves, the pine trees, or the activity on the ocean,” says Eileen. Like re-watching a favorite play, the plot is wonderfully familiar, but the performance is never quite the same.