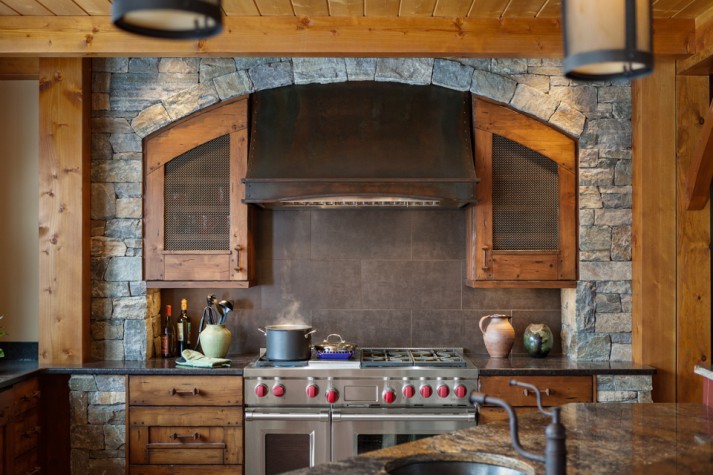 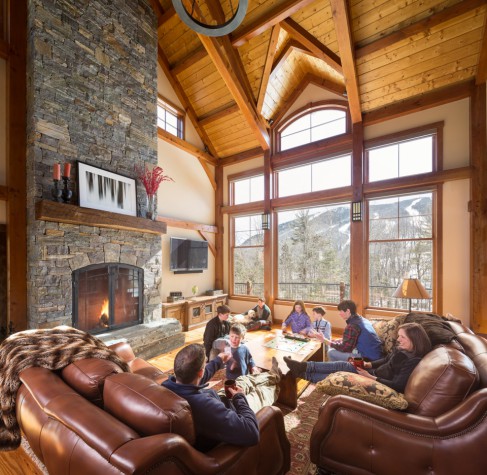 The Gainey family before an expanse of windows (opposite) that offers views of Sunday River ski trails during the day and front-row seats to Sunday River’s fireworks show during the winter. The massive stone chimney is of American granite, and its mantel is a reclaimed barn timber. The floor is reclaimed heart pine. The leather sofas are from Hancock and Moore. The table is from TerraSur Furniture. 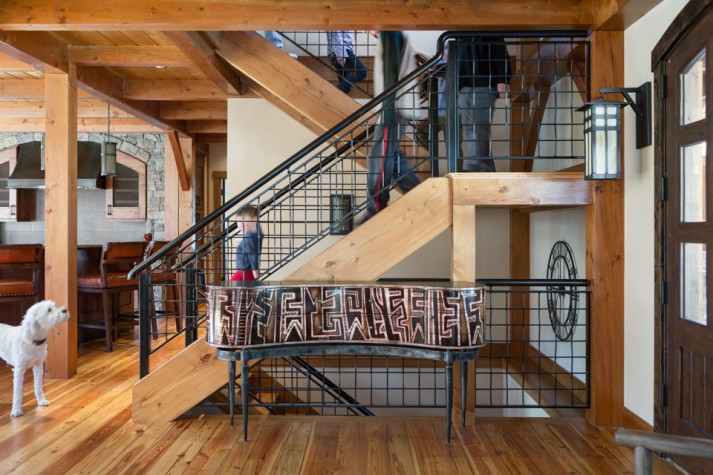 Eric Smith of Glen Cove Builders in West Paris is responsible for the steel basket weave of the stairwell. The table is from TerraSur Furniture. The ceiling is Russian spruce. 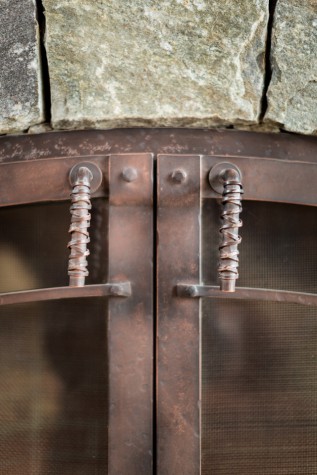 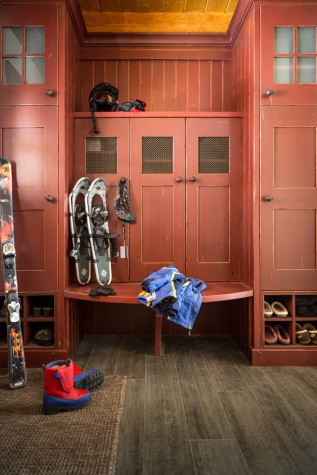 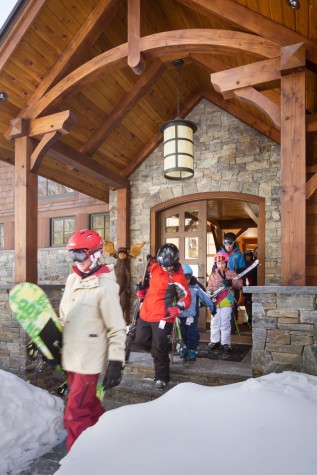 The Gainey family heads out for a day on the slopes 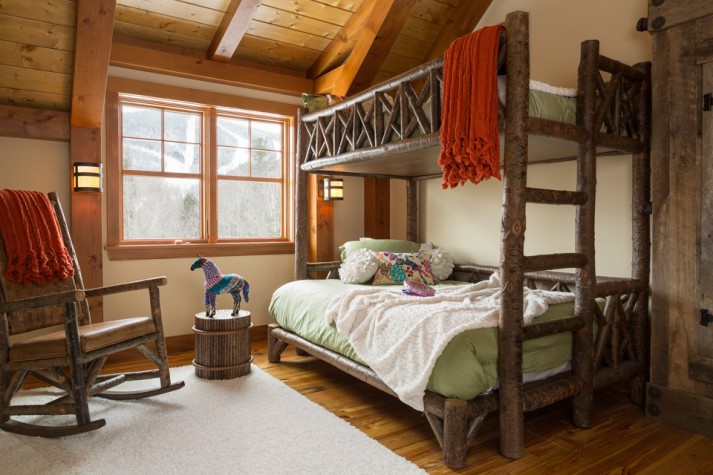 A log bunk bed from La Lune Collection (above, bottom) with a full bed on the lower level and a twin bed above. 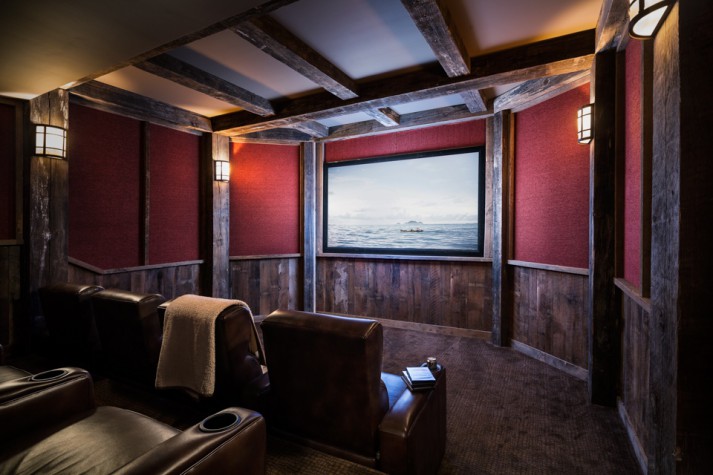 An unused space below the owners’ bedroom became a movie theater (above). Speaking of her children, Charise Gainey says, “The movie theater in Bethel closed, so we needed something to keep them busy.” The room is built of reclaimed timbers and barn board. A sound-absorbing cloth on the walls prevents echoing. The movie theater seats are from Hancock and Moore. 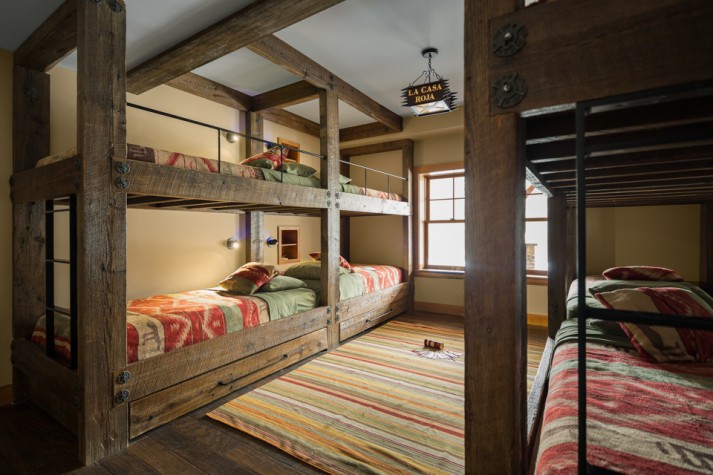 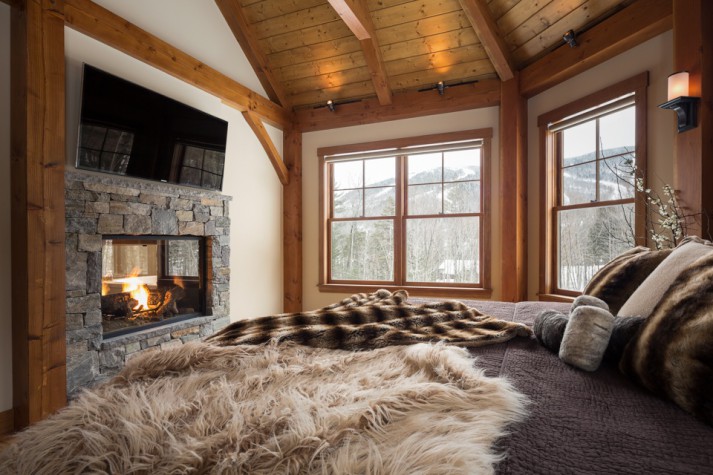 The owners’ bedroom (above, top) with a half-turret ceiling and a two-sided gas fireplace built of American granite. (The other side opens to the owners’ bathroom.) 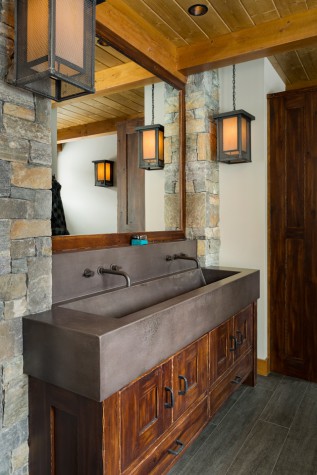 American granite and custom lamps surround the mirror in the owners’ bathroom (opposite). The sink is concrete, and the floor is ceramic plank tile. The cabinets under the sink are a rustic hickory with a dark brown stain. 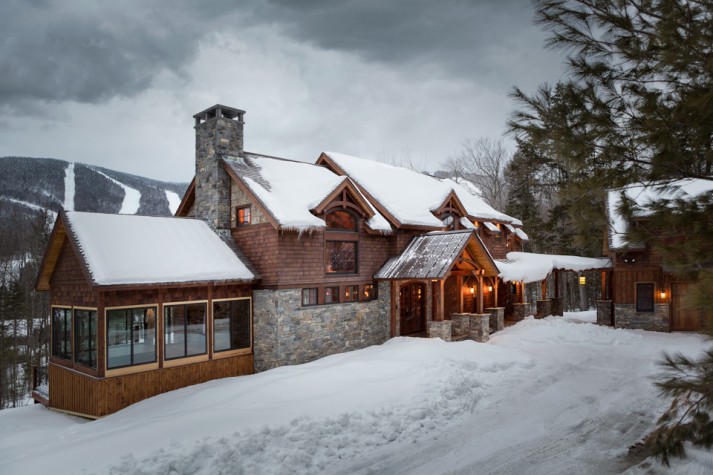 The Gaineys wanted their mountain house to make ample use of wood and stone, so the exterior is comprised of stone veneer, red cedar shakes, pine board and batten, and poplar bark shingles. The roofs at the entryway and covered walkway are metal. On the left is a sizable enclosed porch with a family-size jacuzzi. On the right, a covered walkway joins the home to a garage with an in-law apartment 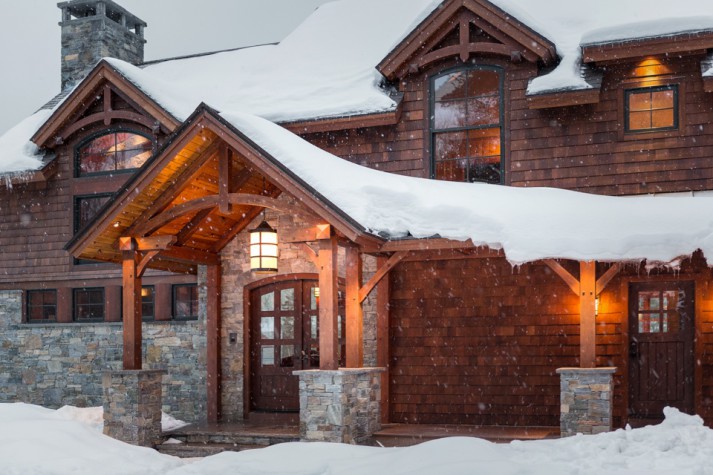 The house (above) is a Douglas fir timber frame built by Rockport Post and Beam and Clearwater Builders. The curve of the entry truss is repeated on the house’s gable dormers. The front door is a knotty alder with a stain. The pendant light is from Steel Partners. 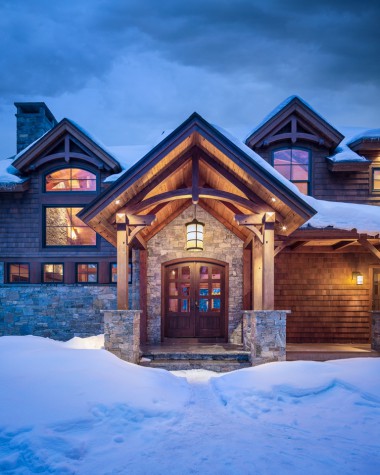 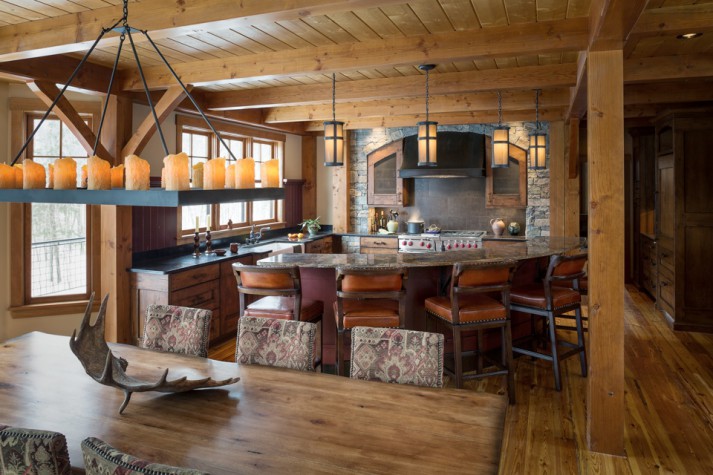 The focal point of the kitchen is the stone arch above the range designed by Jason McConathy of New Mountain Design in Colorado. The radius of the granite-topped kitchen island references the arch in the stone. The dining room table is from Hancock and Moore, and the dining room chairs are from Jessica Charles. The pendant lights are from Steel Partners who made rustic lights of hammered steel for rooms throughout the house. 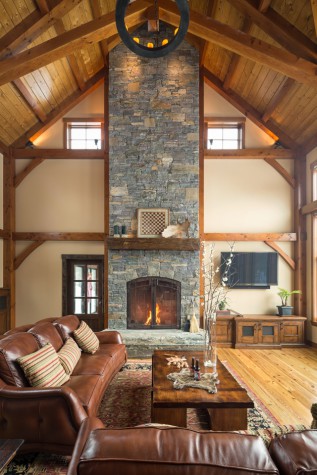 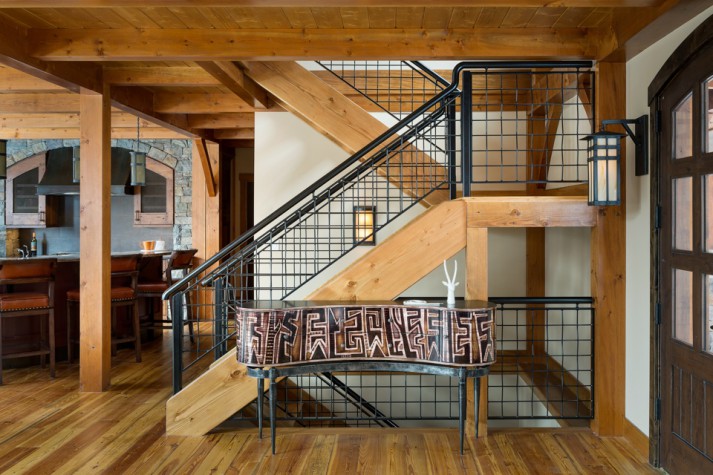 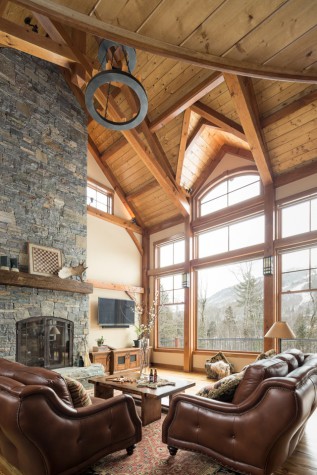 In Newry, a rustic timber frame built for a family who loves to ski

Welcome to La Casa Roja,”says the chalkboard in the mudroom of Charise and Ken Gainey’s Sunday River home. A picture of two mountains and a smiling face accompany the greeting. The artwork is by Bella Gainey, aged 10. Her drawings make sense. After all, there are many smiling people within the Gainey home: Charise, Ken, and their six children, who range in age from 3 to 16. As for the peaks, Sunday River Resort is just outside their back door. Except for the bonhomie, the words are a little more puzzling. The house isn’t red. Or Spanish. Instead, it’s a timber-frame mountain home that makes ample use of stone, steel, and a variety of wood species. The name, it turns out, is simply about the property. There once was a red house on the Gainey land. After it had been disassembled and its various useable pieces given to Habitat for Humanity, the family kept the name. They needed to have a name for the place they go every weekend from November to April and also for a few weeks in the summer: La Casa Roja.

It’s not uncommon for a couple to say the design of their home is driven by their family’s needs, but for Charise and Ken Gainey, this is a little more true than usual. Everything about their home—its location, orientation, and layout—relates to the size of their brood. Their family size affected bedroom design, room size, entertainment options, and material choices. “I wanted to use elements that would last,” Charise says. But another pressing issue was their eldest child who, in a manner of speaking, made the Gaineys a family of skiers in the first place. Jacob was diagnosed with a brain tumor at age seven. Surgeries and chemotherapy followed, all of which made team sports ill-advised and an individual sport preferable, especially one that helps with balance. “When we
were looking at where to build,” Ken says, “there were things that were important to us that wouldn’t be important to other people. Like we wanted to be right on the mountain, because of fatigue issues. We wanted the kids to be able to go out the door and go skiing and ski home, so they could be more independent, and we didn’t want to spend too much time in the car. We wanted to leave more time to enjoy the mountain.” They wanted, too, to be near a mountain that would challenge their children as their children became better skiers.

Initially, the Gaineys did not want to build new. “We try the easy road first,” Ken says, “but we never succeed.” As the Gaineys explored options, they became interested in timber- frame homes. Eventually, they saw some homes in New Hampshire, one of which had features that they liked, such as an in-law apartment and a covered walkway between main house and garage. They contacted the architect—Ward D’Elia of Samyn-D’Elia Architects in Ashland, New Hampshire— and he designed a similar home for them. Evan Dyer, Tom Dyer, and Kevin Morrissey of Rockport Post and Beam and Bruce Lilly and Eric List of Clearwater Builders in Bethel executed the plan, making adjustments along the way. The result is a home with an ample great room and open kitchen, a bunkroom where all the boys sleep, a girls’ bedroom with bunk beds, and some unusual spaces dedicated to family fun: a screened porch with a sizeable hot tub, a second-floor balcony with a puzzle table, and a movie theater with leather seats, used (most recently) for nightly screenings of Boris Karloff’s black-and-white TV show Thriller. There’s also an impressive “ski room,” a downstairs space with a large custom round bench on which family members sit as they pull on their gear, otherwise housed in a wall of closets with coats, a cubby shelf with helmets, and a corner with ski racks and a boot and glove warmer.

Because Rockport Post and Beam and Clearwater Builders worked simultaneously, the house went up quickly. Its construction includes the substantial frame with various details (curved gable trusses and knee braces) but also structural insulated panels (SIPs), which are foam insulating boards that wrap the structure and provide a continuous sheet of insulation. With a regular house, insulation typically goes between the posts, so there is a “thermal break” where the post is. With a timber frame, there is no such break, since the insulation lies on top of (instead of between) the posts. The result is a super- insulated building. Other green choices for the home include a geothermal heating and cooling system and a heat recovery ventilator (HRV) that exhausts air while retaining heat and moisture, so as not to lose energy.

As they were gathering ideas for their home, the Gaineys found themselves drawn to some designers and suppliers whose aesthetic might be more Rocky Mountain than Maine per se, including kitchen and bath designer Jason McConathy of New Mountain Design in Colorado and custom lighting manufacturer Dennis Gift of Steel Partners in Washington State. Charise jokes that she talked to these guys more than her family during the building process. Gift’s heavy chandeliers, wall sconces, and pendant lights of hammered steel and wire mesh fill the house and have a “frontier, lodge look,” Gift says. McConathy says he specializes in the “mountain architecture retreat look.” The distance for this project didn’t daunt him: “Oh, I can get there on Jet Blue for $200,” he told Charise when she first contacted him, after seeing his work on Houzz. com. McConathy came to Maine to measure spaces and create a 3D computer model of the home, which he used for the custom cabinetry and other features he designed for almost every room in the house, including the kitchen, an upstairs and downstairs bar area, the powder room, the owners’ bathroom, the ski room, an office nook off the owners’ bedroom, and the mudroom. McConathy’s designs feature stone work and knotty alder and rustic hickory cabinetry with chunky hand- forged pulls and metal meshwork, the woodwork of which was executed by Homestead Cabinets in Utah.

McConathy’s material choices worked with the material choices in the home at large, since American granite is used for the massive great room chimney as well as outside columns and part of the exterior walls. The central staircase is of a woven metal that looks like upscale chicken wire. Metal recurs on the railings of an exterior balcony-porch that looks to the mountains and of a curved interior balcony. The home is constructed of a variety of woods, including Douglas fir for the timber frame, reclaimed heart pine for the great room floor, Russian spruce for ceilings, and a combination of red cedar shakes, pine board and batten, and poplar bark shingles for the house’s exterior. Barnboard is used throughout the ground floor, as is the wood from Southern tobacco farms that Clearwater Builders also used for the bunkroom’s built-in bunk beds and the barnboard vanities that Vienna Woodworks of Minnesota built for some of the bathrooms. The movie theater manages to be both state-of-the-art and old-fashioned, its wainscoting and frame also constructed of old barn timbers and its walls of sound- absorbing cloth, and its electronics and sound system are from Running Solutions in Hull, Massachusetts.

The wood throughout the home is earthy, as are the furnishings—leather couches, wood tables, log furniture— from suppliers like TerraSur Furniture, La Lune Collection, and Hancock and Moore. The color brown is the overall impression you get from the home. The effect is warm but not heavy, rustic but not cabin-y. Two-sided fireplaces (one in the great room/screened porch; another in the owners’ bathroom and bedroom) add to the effect. Given the children, the furnishings were chosen for their durability and ease of cleaning as well as their appearance. And being sensible about materials doesn’t preclude some simply fun choices, such as the Brazilian beach stone into which the owners’ bathtub is set.

Atypical for him, architect D’Elia wasn’t involved in the home after he did the designs; the builders took over and went from there. But he says he did receive an email from Charise Gainey several years after he completed his work. She was stuck in Spain and needed some money. So he called her up. She was, of course, not in Spain and not asking for cash, but she did have something important to share. She was very happy with how her house had turned out.

What’s more, seeing her eldest son ski every single trail on Sunday River and become a talented snowboarder has been “kind of magical” for Charise. Ken says, “He does stuff my wife and I can’t do.” But it’s not just their eldest son who is skilled. Ken and Charise describe themselves as intermediate skiers; their kids, however, are “up in the trees,” skiing places that even their parents haven’t mastered. That said, when the children come down from the slopes, they arrive at a place their parents have perfected: La Casa Roja.