At sunset, rose and lavender rays bathe the home - and the diners on the screened-in porch - in a flattering glow. Landscape architect Todd Richardson of Saco conceived the curved beds that brim with rugosa rose, Abbotswood potentilla, Annabelle hydrangeas, and daylilies, and Chad Francis of Atlantic Landscape Construction in Ellsworth brought them to life. 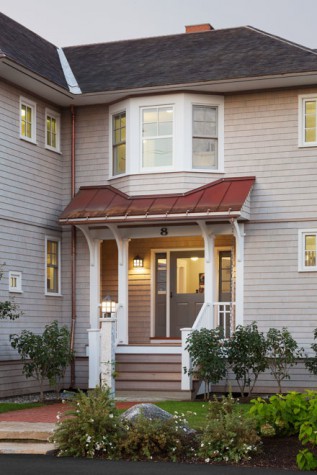 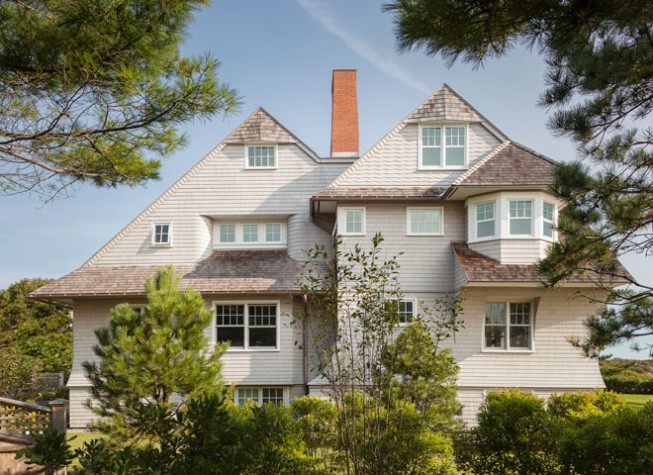 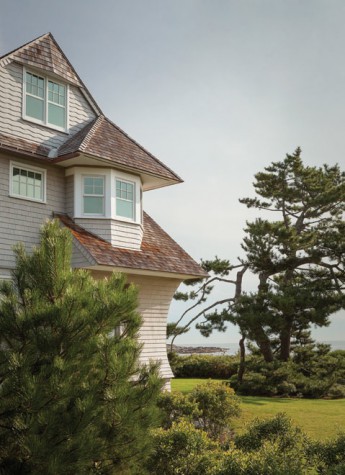 An approximately 75-year-old Austrian pine echoes the home's graceful arcs and angles and adds intrigue to the landscape. 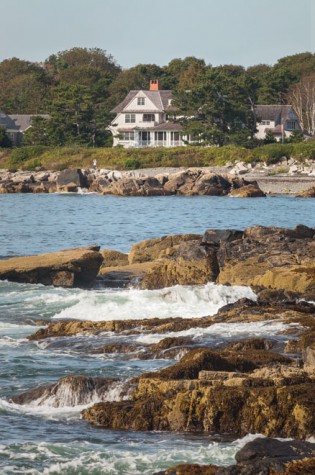 Behind the rocks that line the left side of the shore is an ideal marshmallow-toasting spot, says the wife. 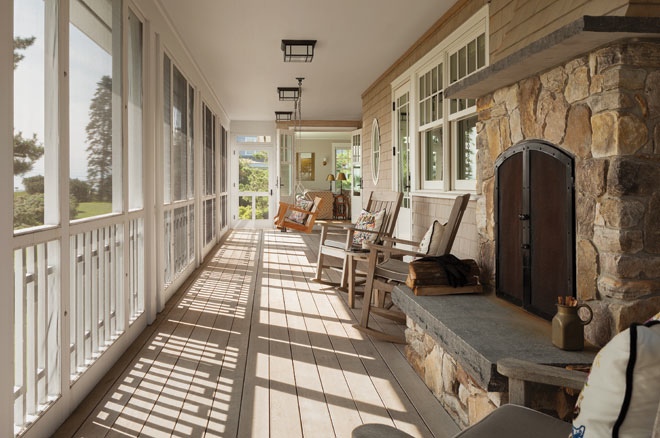 During the design process, the husband flagged a photo in Vincent Scully's book The Shingle Style and the Stick Style with a note: "ocean-facing façade with a porch and French doors." Now a reality, the sun-dappled porch functions as "a big living room," he says, with comfy seats and a fieldstone and granite fireplace constructed by Jim Leslie of J.B. Leslie Company in South Berwick. 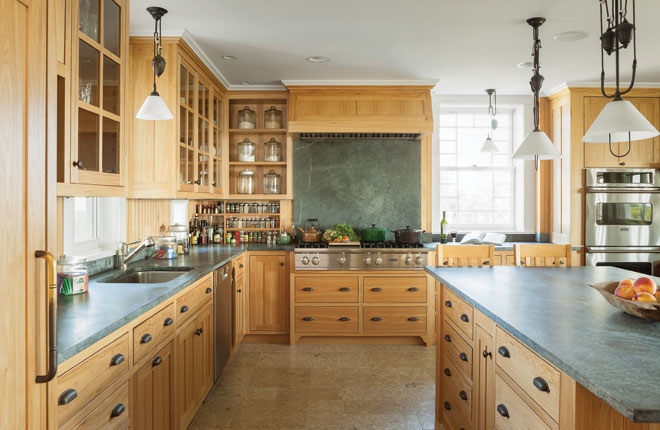 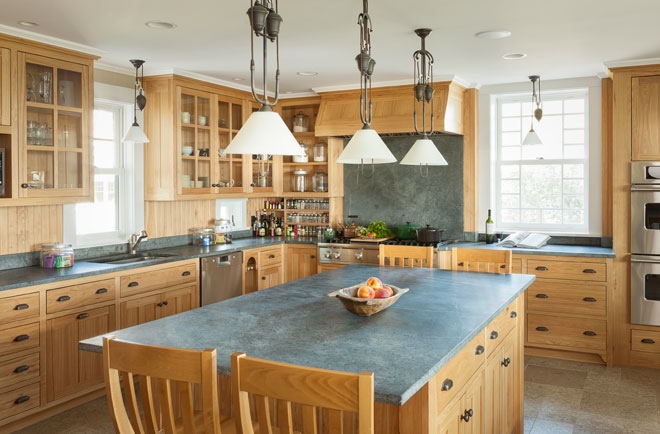 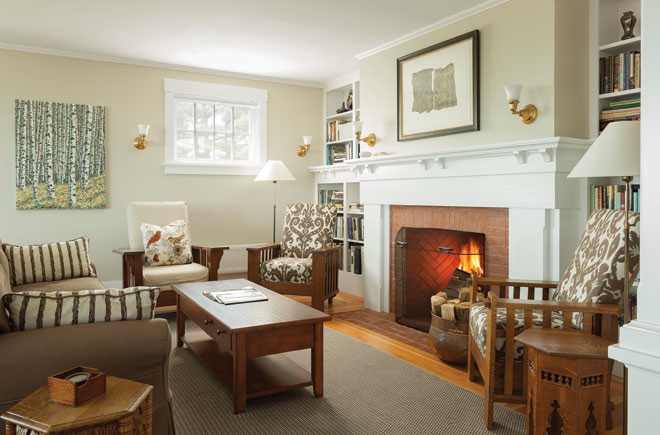 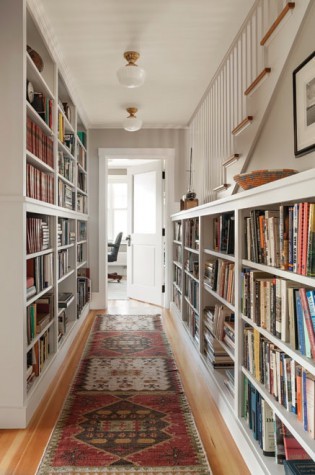 A hallway reminiscent of library stacks leads to the couple's shared office. On the door, "a private-eye frosted-glass panel" fills the space with light, says architect Russ Tyson. 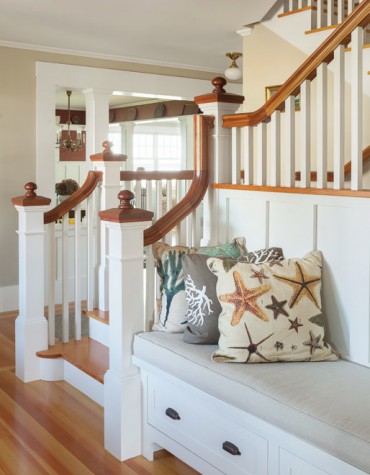 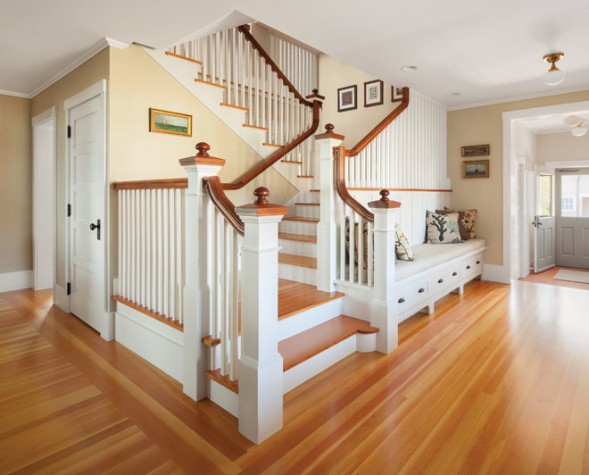 Vertical slats around the staircase create an open feeling and allow air to flow through the house. 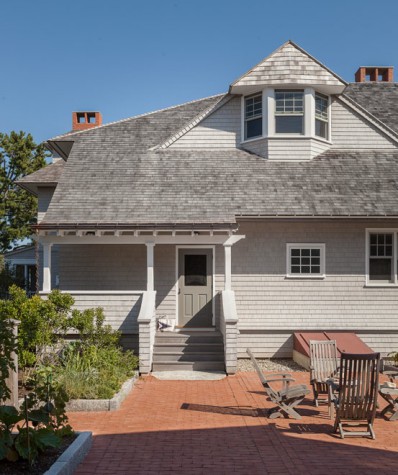 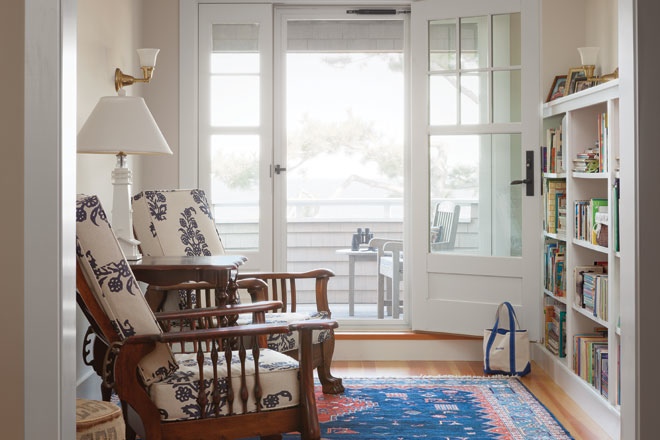 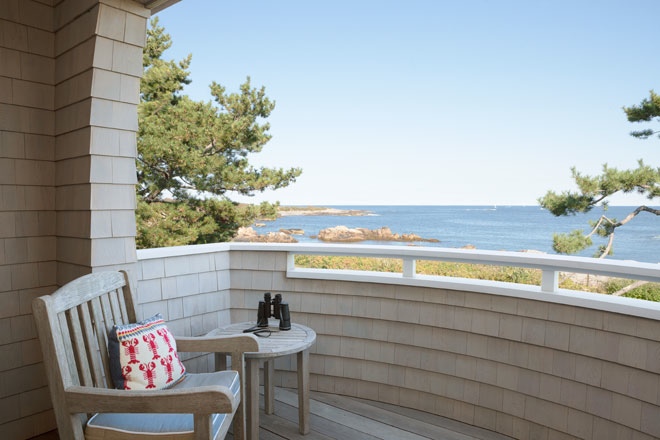 A deck off the second-floor sitting room mirrors the curve of the skyline. 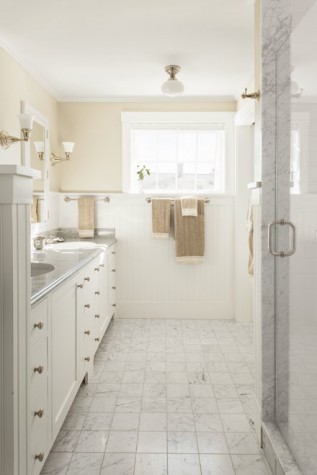 In the master bathroom smooth and textured surfaces - Carrara marble in slab and tile form and beadboard wainscoting - enliven the neutral palette. 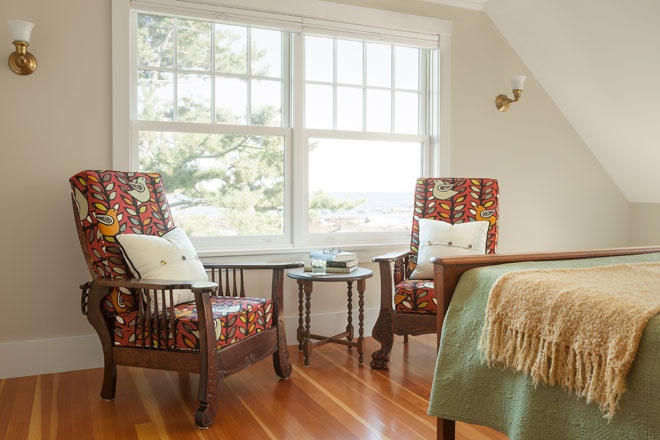 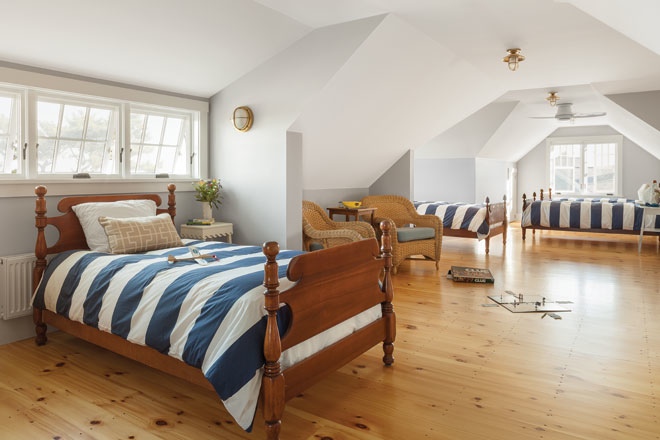 The bunk room conjures a more magnificent version of a sleep-away camp. 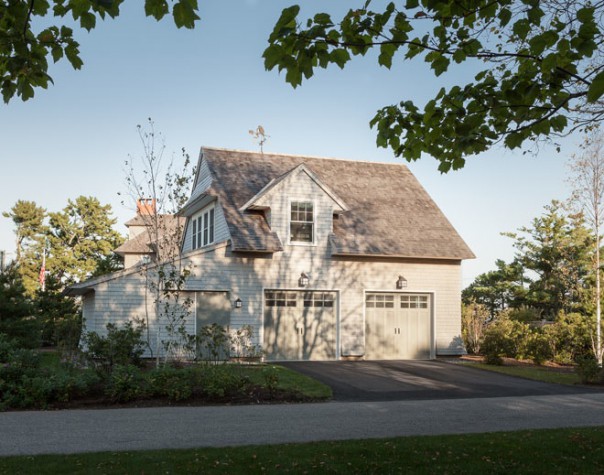 A home for a family, and future generations, takes root on the southern coast

Along a quiet stretch of southern coastline, water pools around a giant sculpture of sorts. The sloping figure is tucked into a playful crouch, its “snout” in the sand, like a great chiseled beagle basking in the sun. A few yards from Puppy Rock, as it’s known by the family who lives here, is “Caribbean Beach”—an inlet the homeowners named for its resemblance to The Baths, the famed boulder-strewn beach on Virgin Gorda in the British Virgin Islands. When the sea is churned up, waves pummel this part of the shore in cinematic fashion—“like you see in a 1950s movie when they’re kissing on the beach,” says the wife, referencing Burt Lancaster and Deborah Kerr’s iconic roll in the surf in From Here to Eternity.

For nearly 20 years, this sweep of land and open ocean has captivated the homeowners’ imagination. “The spot is so familiar and personal to us, and yet, every time I look, I see something different in the waves, the color of the water, or the way the sun lights up the rocks,” says the husband. The couple came to the area by way of Manhattan when their children were 8 and 10 years old. They started out staying with friends and eventually purchased a place that was close to their beloved rockbound beach, but didn’t have a view. When the property next door, situated across a narrow road from the shore, became available in 2007, they quickly made an offer. “There’s a beautiful fine-sand beach nearby, but we always wanted to be here,” says the wife. “We’d have cookouts among the boulders and the kids jumped off Puppy Rock; it’s public land but it has a private feeling.”

There was a house on the property, but the couple wanted to build a place in the shingle style that could easily accommodate their family and friends and, someday, grandchildren. “We love the history of the style and how it’s so quintessentially Maine,” says the husband, who remembers the genre fondly from growing up in Portland. When they first met with Rob Whitten and Russ Tyson of Whitten Architects in Portland, both parties were armed with the same design bibles: The Shingle Style and the Stick Style by Vincent Scully, Jr., John Calvin Stevens, Domestic Architecture, co-written by Earle G. Shettleworth, Jr., and Maine Cottages, John M. Bryan’s tome about the architecture of Fred L. Savage on Mount Desert Island. “We worked hard to design a home that looks like it has always been here,” says Whitten. And the homeowners have the Post-It-flagged books to prove it.

The exterior design, with its sweeping porch and artful arrangement of peaks and curves, is sympathetic to Stevens and Savage, while offering a fresh take. “There’s a wide variety of shingle style details and they’re open to interpretation,” says Tyson, who took the lead on the project. Working with Jeff Jones of Maine Coast Builders in York, the architects incorporated some novel features, such as flared porch columns juxtaposed with a geometric-patterned railing on the front facade. On the southern gable, a patch of wavy-edged shingles, intermixed with the traditional squares, offers another surprise.

Inside, design elements flow seamlessly from one into the next, creating inventive built-ins. In the living area, a dentil-studded mantel stretches across an entire wall, connecting the fireplace with bookcases on either side. In the dining room, a plate rail dotted with hammered metal Arts and Crafts dishes crowns a pair of leaded glass china cabinets. And in the front hall, paneling at the base of an elegant mahogany staircase forms the backrest for a cushioned bench. “It’s common in shingle style homes to see an integration of forms, particularly in the entryway, which tends to be grand and inviting,” says Tyson.

The slatted staircase, its posts trimmed with delicate knobs, zigzags through the middle of the house, linking three levels. Between the second and third stories, a bay window provides “central air,” drawing cool sea breezes from the downstairs windows up through the rest of the home. The smell of saltwater and beach roses drifts in with the gusts, along with a nonstop concert. “We can hear the waves, the birds, and the bell buoy a mile and a half in the distance—it’s a beautiful and comfortable way to live,” says the husband.

The home also synchronizes with the sun. In the early morning, light streams in through the kitchen’s eastern windows, then moves into the living room and office on the south side. In the evening, the homeowners dine next to a fieldstone fireplace on the northeast end of the porch, which projects out far enough to catch the pink and purple rays beaming in from the west. To create as much airiness as possible, and maintain a period look, the team went with a detached garage. “Otherwise you lose a whole wall that could be letting in light,” says Tyson.

Before building, the couple, who plan to retire here, made a wish list. One must-have, inspired by their former Federal-style townhouse in Boston, was a fireplace in the kitchen. The raised brick structure anchors one corner of a room that is also furnished with a seven-foot-long window seat, a built-in desk, and warm hickory cabinetry that conjures a paneled library. “We use that fireplace more than any other because we spend so much time in the kitchen—it’s really more like a family room,” says the wife. The couple also wanted to carve out space for their hobbies: she has a sewing room on the second floor and he has a pair of connected rooms in the finished basement, where he is building a historic model railroad depicting Portland’s waterfront. A passion for more than 25 years, the project had previously been relegated to boxes. “Now I can go into my own little world,” he says.

Four flights up, you enter another “world.” The bunkroom, which occupies most of the top floor, features six 1960s-era maple twin beds, knotty pine floors, and an alley-like area for playing games (or sliding in socks). Currently used to host large groups of guests, the space was designed with future grandchildren in mind. “We once rented a summer house with a room like this and our kids loved it,” says the wife, gesturing around the cavernous space, which appears primed for pillow fights, blanket forts, and shadow puppets on the pitched ceiling.

Through the windows on the water side, a pair of weather-beaten Austrian pines sets off the view. “My babies,” says builder Jones, whom the homeowners charged with protecting the trees during the construction process. The twisting limbs form a series of cockeyed “frames” over the scene, sharpening your focus on snippets of vivid blue sea and sky—and the occasional monolithic creature lazing in the sand.