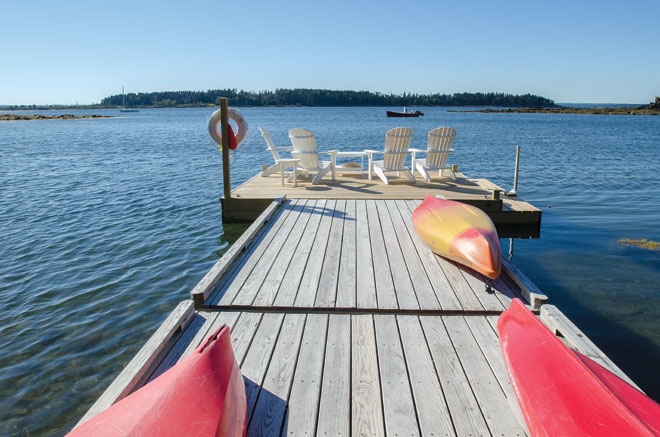 The home is located on Middle Bay in Harpswell. The homeowners' grandchildren like to catch crabs and go swimming at the end of the dock, which stores kayaks in the summer. 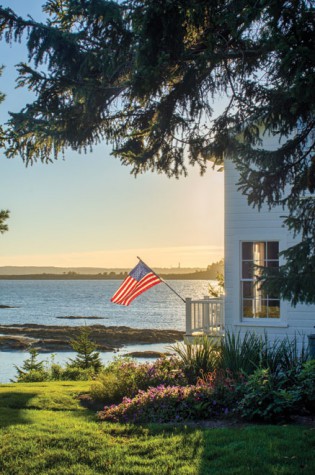 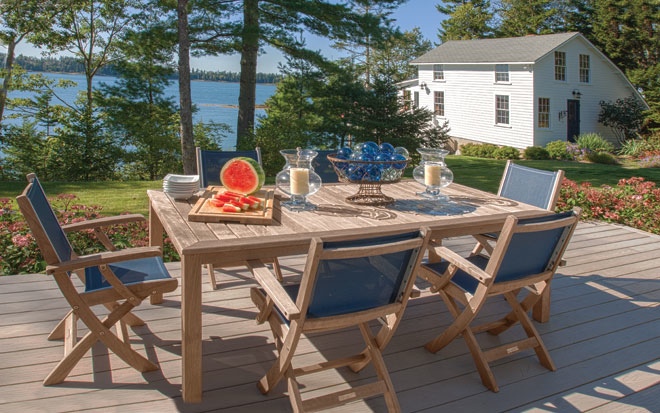 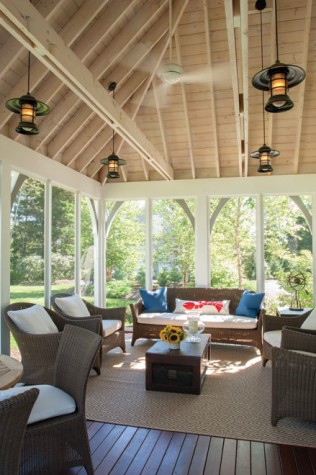 The screened porch has a pickled-pine vaulted ceiling with exposed framing. The porch furniture references Bar Harbor wicker but is a vinyl composition wrapped around steel that doesn't mold or rot. Banks says the straw-colored polypropylene rug with a chevron pattern "is indestructible. You can spill red wine on it and clean it up. 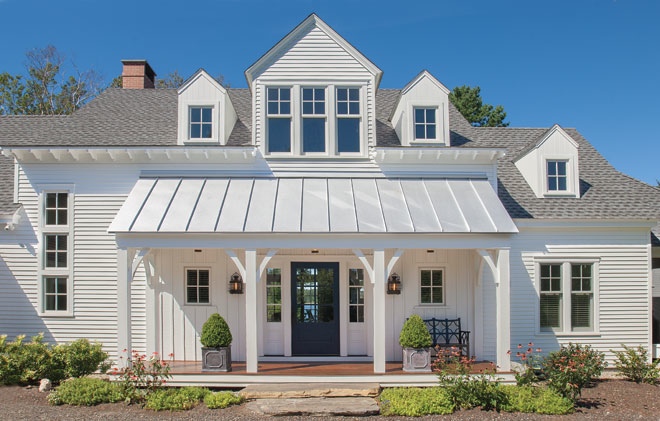 High vertical dormers and narrow cottage-sash and stacked barn-sash windows emphasize the verticality of the façade. The curved brackets support a standing-seam, lead-coated copper roof. Architectural designer and interior decorator Linda Banks says the rafter tails under the soffit "give the house a touch of the gingerbread cottage. 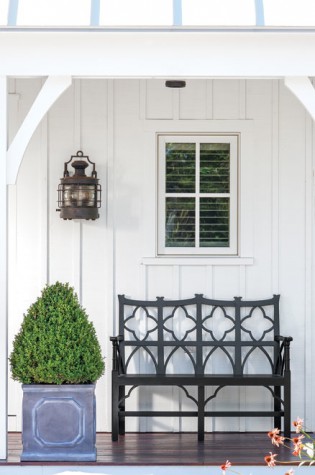 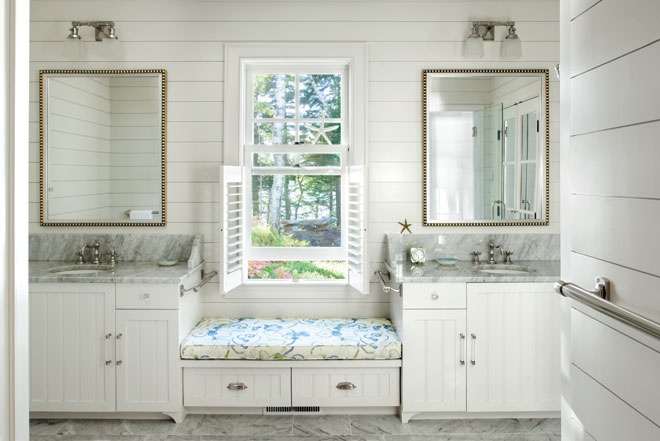 The master bathroom features beadboard cabinets, marble countertops, and nickel-gap walls. The mirror frames were made by combining two types of molding. 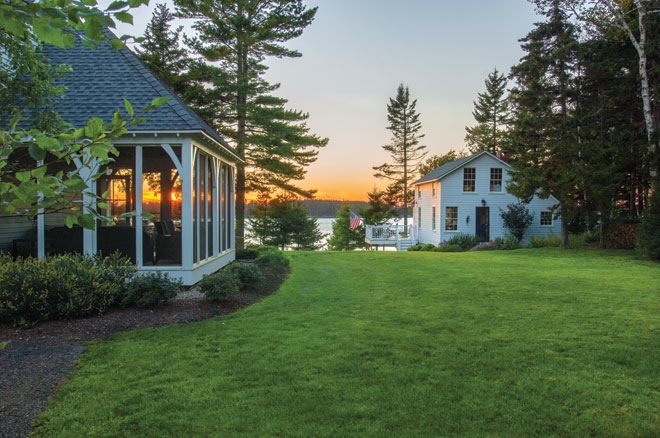 To the right of the screened porch is the property's original structure with a new porch. The grass between the buildings serves as a family gathering space. 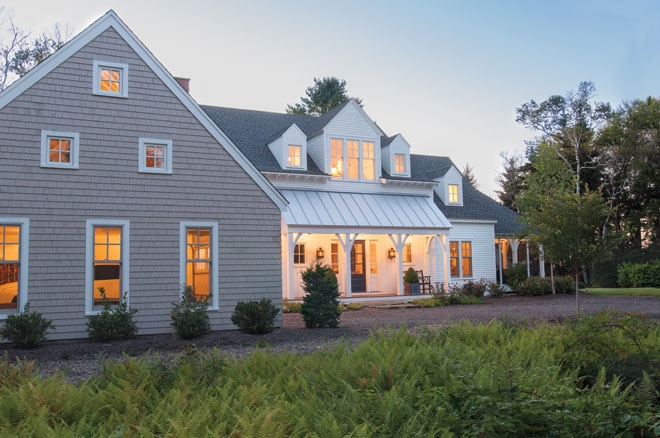 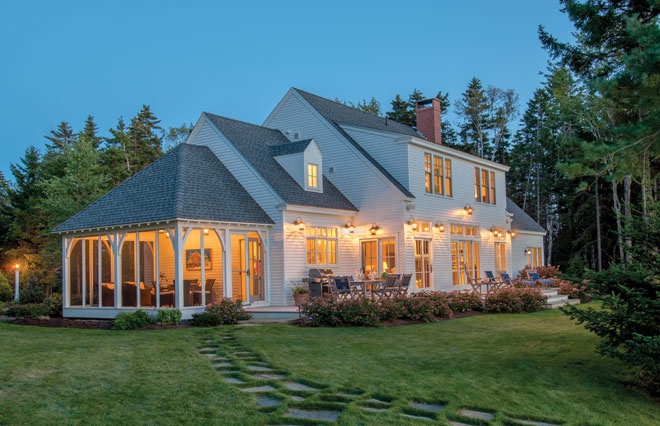 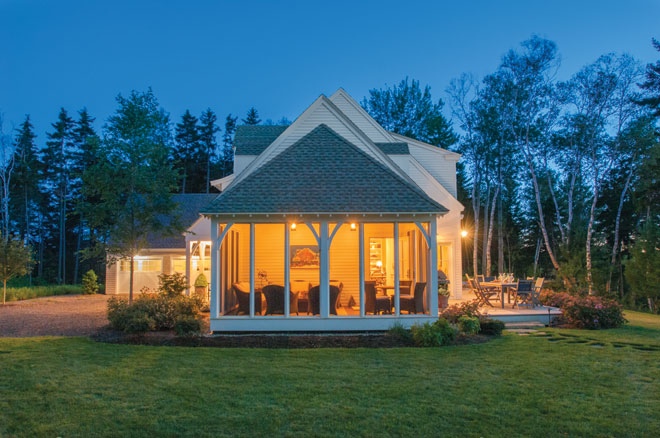 A night view of the screened porch shows that the house is constructed of a series of descending gables. The foundation plantings are purposely designed to be understated and to mature in a way that won't overwhelm the house. 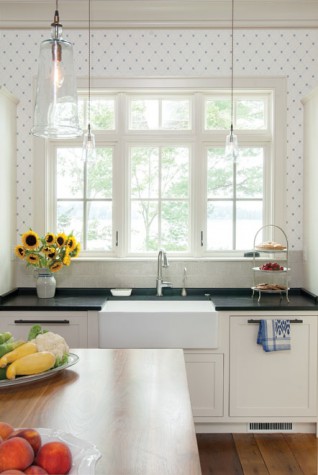 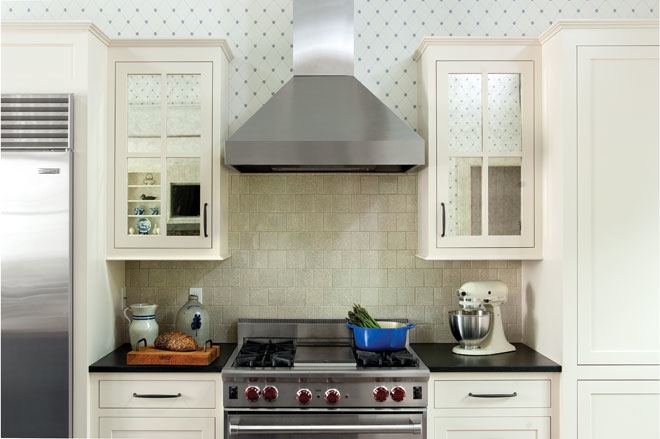 Banks says she designed the cabinets with mirrors to give "a nice sense of transparency to a wall that doesn't have any windows." The wallpaper reflected in the mirrors and covering the wall above the stove is a blue and white trellis pattern, "almost like the lining of an Italian book," Banks says. 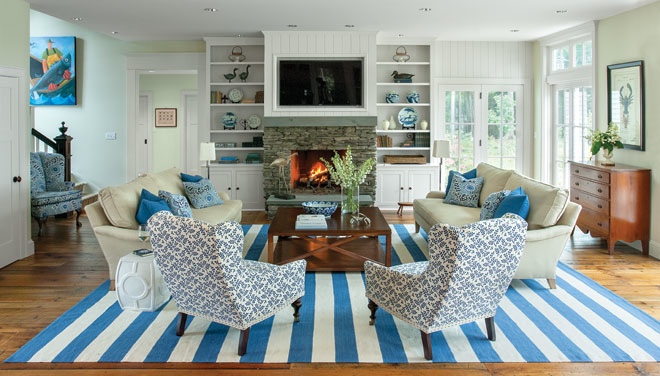 The living room is furnished with items, including English-style white sofas, procured through Falmouth's Simply Home. The finishing on the walls around the stacked-stone fireplace is called nickel gap, a name that refers to the fact that a nickel can fit between the individual planks of wood. The mantel is a weathered beam, the pine flooring was recovered from an old warehouse, and the lobster print at right is from a collection that Banks curates and licenses through the Wendover Art Group, a commercial art house in Florida. 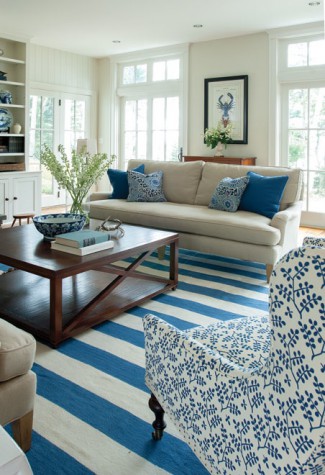 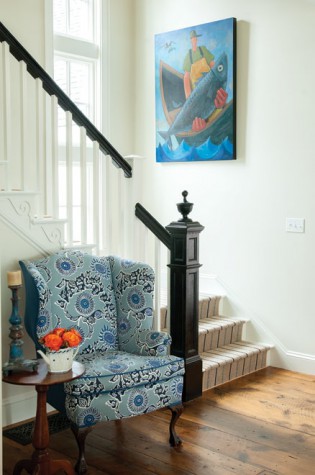 The painting at the base of the stairs is by David Witbeck, a Providence-based artist who specializes in painting of fish, fishermen, and the sea. The chair came from the homeowners' previous home but was re-covered to suit the palette of the new home. 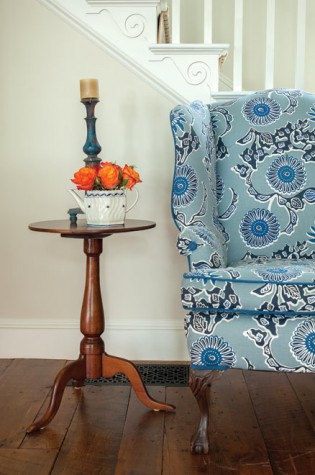 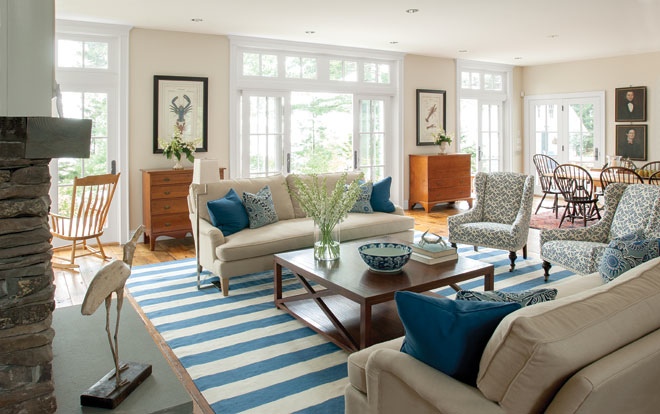 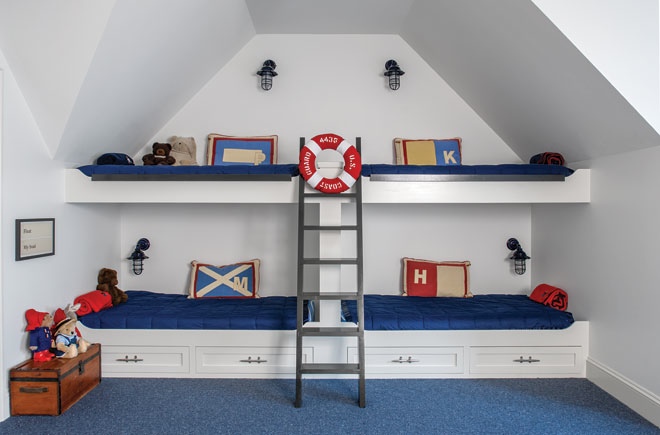 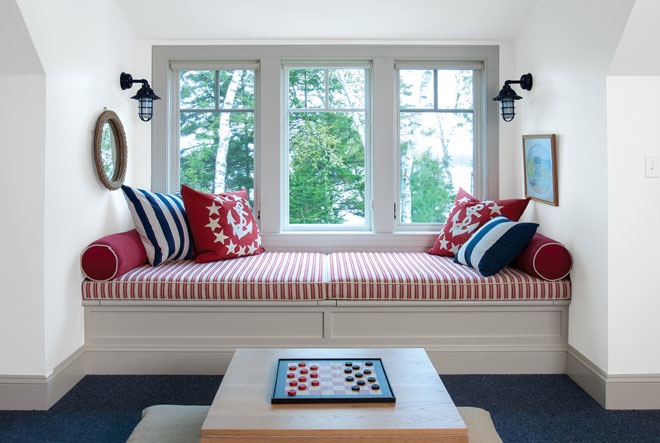 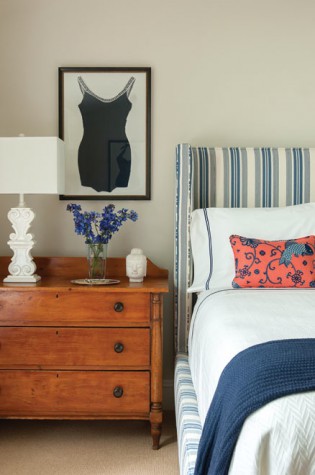 A framed vintage bathing suit hangs next to an upholstered headboard with blue and white ticking. The salmon-colored pillow decorated with blue fish matches the fabric on a chair in the opposite corner of the room. 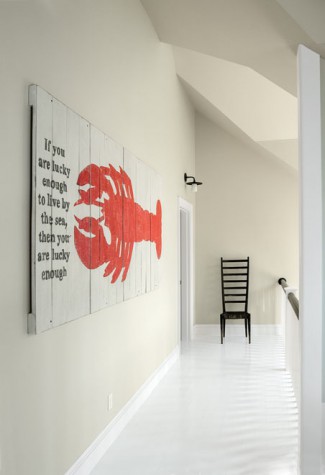 The upstairs hallway is open to the ground floor. The wall art is based on a sign at a nearby lobster cooperative. The wife of the couple who own the house chose the motto painted on the left. 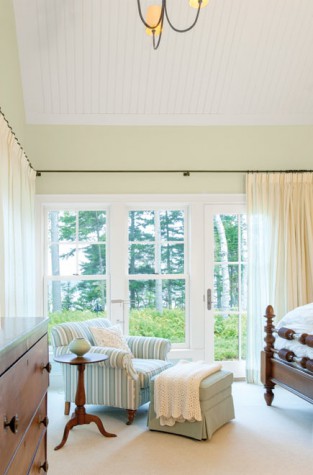 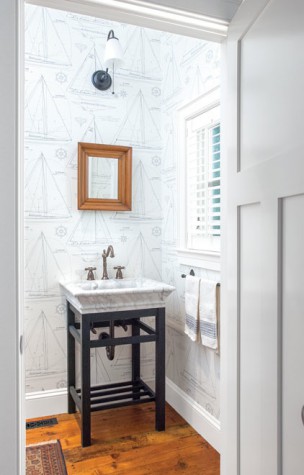 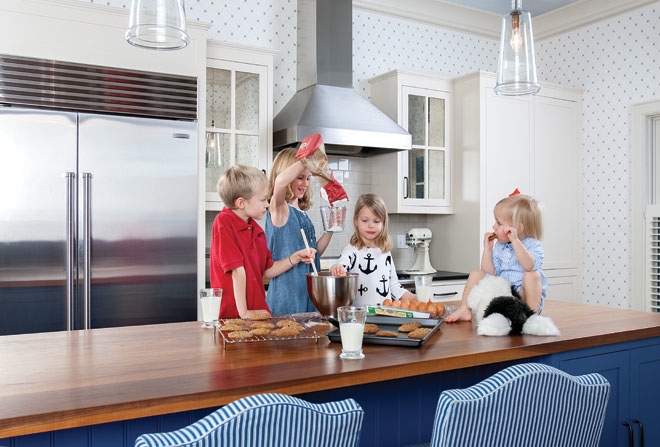 Grandchildren making cookies at a blue beadboard kitchen island with a walnut counter.

Such is the nature of Linda Banks’s work that she is not often at Simply Home, the Falmouth home furnishings and accessories store that she established to showcase her design ideas. But in 2010, on a day that a Rochester-area couple stopped by, she happened to be in a backroom, celebrating her finance manager’s birthday. The visiting couple knew Banks’s work as an architectural designer and interior decorator, having seen her homes in magazines and having been in her store on previous occasions. Now they had a chance to meet Banks and talk about property that they had bought on a cove in Harpswell. The land had an existing outbuilding, once used by duck hunters, and the couple was thinking of renovating and building an addition. The more they talked, however, the more Banks suspected that they were headed in the wrong direction. The wife remembers Banks asking questions then saying, at some point in the conversation, “I want to design your house.” Over the next few days, the couple visited three houses that Banks had designed and that Chris Ballard of Ballard Builders in Falmouth had built. Then Banks took them to her own home. The couple didn’t just admire the different homes; they saw how unique each one was, how expressive of the sensibilities of the respective owners. They knew Banks and Ballard were the team they wanted to design and build the home into which they planned to retire.

Banks persuaded the couple that it was wisest to build new, since the duck-hunting cabin had no foundation and its waterfront location would be subject to complex zoning ordinances. Placed a little farther back from the shore, a new house might form a small compound with the original. The land in between the structures could be fashioned into a gathering yard, and the cottage could be used for guests. During construction, the cabin became builder Chris Ballard’s office. He routinely took his boat from Falmouth to the cove to begin his workday.

Initially, the couple imagined building a quintessential Maine cottage with a front porch and screened porch. In a manner of speaking, that is exactly what they got, but the eventual design also came to include aspects of a Cape and to be partially inspired by Newell Jacobsen, Banks’s favorite architect, who is known for his ultra-modern take on American vernacular. The Harpswell home is long and narrow—the linear plan “honoring the waterfront setting,” Banks says—with primary and ancillary gables. The “central box,” as Banks puts it, encompasses the main living area and upstairs guest rooms, which are tucked under the eaves of the gable roof. Secondary and tertiary roofed areas enclose a bunkroom and garage to the left of the central box and a kitchen and then a screen porch to the right. From the outside, one sees a series of descending gable roofs. The central gable is “pierced” with high distinct dormers that let even more sun into a home already abundant with windows and glass doors.

Since the Harpswell house would be a retirement home and permanent residence, Banks designed an open plan with a first-floor master bedroom and second-floor space for guests, including a bunkroom for grandchildren. On the ground floor, a fireplace with stacked stone anchors one end of the communal area and an open kitchen anchors the other. Three sliding glass doors with transom windows open onto a platform deck with no railings, so nothing obstructs the view of the cove. While looking for a newel post at the Old House Parts Company in Kennebunk, the couple saw old pine planks that still had the marks of the saw in them. They decided to use this wood for the communal spaces in the house. The antique floor gives the house “instant soul,” Banks says.

The master bedroom is more of a suite area than a room, encompassing as it does a mudroom/entrance off the garage, two small offices, and a hallway festooned with family photographs, as well as a master bedroom and bath. The exterior corner of the bedroom is glass, allowing a lovely view through birch, white pine, and oak trees to the water. What is expressed as a secondary gable on the exterior is here a gabled cathedral roof finished in beadboard. The bathroom has his-and-her sinks with Carrera marble vanities, which are separated by a built-in cushioned bench, so bathers can sit down when drying off from the steam shower. The bathroom has starfish wallpaper, which echoes the nautical wallpaper in the powder room off the front foyer.

One enters the house through a front porch with a standing-seam metal roof, a feature that serves the function of breaking up the mass of the facade while welcoming the visitor into the house. The front door is partially glass, so one can see through the house to the water beyond. Antique ship’s lanterns flank the door on a wall of vertical board and batten, although otherwise the house is white clapboard and the garage is stained white cedar shingle. Banks chose blue and white for the interior. “Who doesn’t love blue and white?” she says. “That is the color of the owners’ eyes and their favorite palette. One of the things I love about a monochromatic scheme is that it creates a restful atmosphere.”

Banks enjoyed the process of integrating the homeowners’ existing inventory—which included upholstered chairs, bureaus, family portraits, a wooden trunk, a grandfather clock, Windsor chairs, and Oriental rugs—with new purchases, much of which came from her store or her personal collections and some of which she had fabricated for the home. New items include English-style white sofas, a Swedish armoire, a dining room table with a weathered pine top, and a foyer chandelier whose round globe suggests a garden armillary. Two prints of lobsters and a convex mirror with a gold-leaf frame with a dragonfly motif come from Banks’s own collections. Custom pieces include blown glass cylinders that were wired and hung from silk cords to serve as pendant lamps for the kitchen, and two bathroom mirrors, which Casco Bay Frames in Portland made by joining two different frames together. Banks also commissioned Steve Hayden of Ohio to paint a red lobster on barn board. One of the homeowners got the idea for the piece from a lobster shack in the area, which has a similar image. At the homeowners’ request, Hayden added a message: “If you are lucky enough to live by the sea, then you are lucky enough.” The work hangs in an upstairs hallway open to the entry floor below.

Alex Hamilton of Tidewater Millwork in Woolwich is responsible for millwork of Banks’s design, including the inset framed cabinets in the kitchen, the blue beadboard kitchen island with a walnut top, and the beadboard and nickel gap walls that are used in areas throughout the house. He notes that Banks “uses oversized moldings that allow her to achieve a scale that is out of the realm of cabinetry and more in the realm of architecture,” as with a reverse cove crown that delineates where the kitchen wall transitions into a sky blue cathedral ceiling.

Dennis Anderson of Salt Bay Horticulture in Newcastle landscaped the property with plants and shrubs, including low- and high-bush blueberries and hydrangea. His design, he says, “was fairly understated, because the house is so architecturally beautiful.” Aside from designing plantings, placing drip stone around the base of the house, and installing a reclaimed asphalt driveway, he built bluestone walkways across the backyard, stoop steps for the front entrance, and a stone staircase that leads from the upper landscape to the beach, where there is a fire pit and a tidal dock.

In the end, says one of the homeowners, “Mother Nature gets credit for most of what is here. It’s so serene and beautiful and the personality of the water changes and the tides change and the birds change.” The couple have spent two years as full-time residents of Harpswell and have had a chance to see their land in all its seasons, to welcome their three children and grandchildren for visits, and to see the home they once dreamed of become a reality. They count themselves—just like their painting says—as lucky enough.