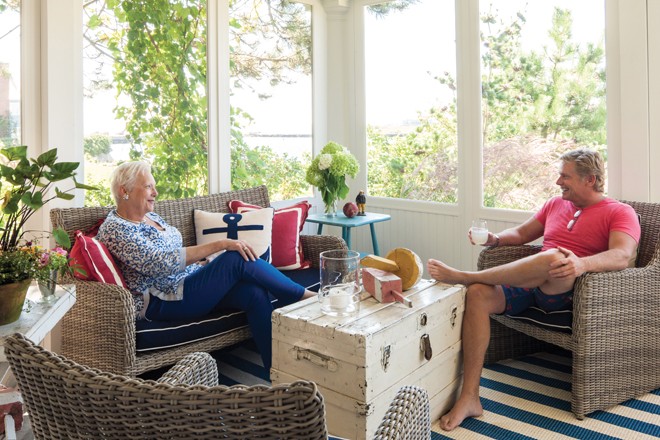 The screens of this porch don't go all the way to the ground, so furniture can be backed against the walls. Louise Hurlbutt used all-weather rattan and blue pillows with white piping for a nautical look. The heavy-duty rug from Sweden via Hurlbutt Designs is made of recycled materials. It can be taken outside and hosed down. 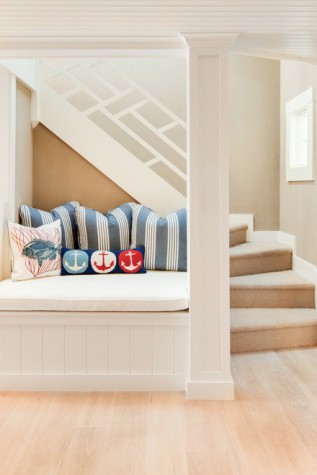 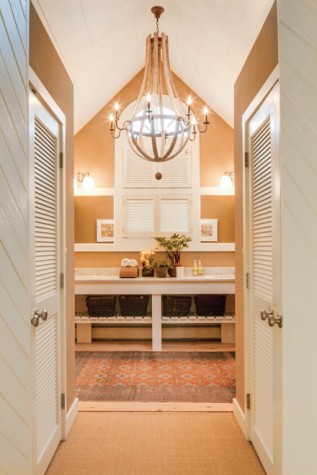 The cathedral ceiling in the bathroom has a chandelier made out of wine barrels, a pine plank floor, and Carrera marble countertops. 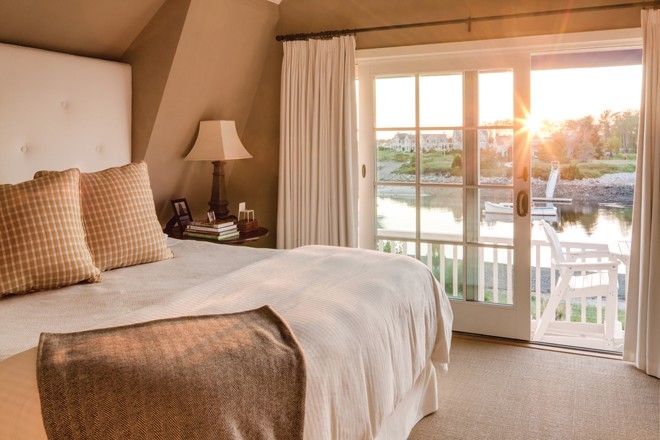 The master bedroom features sliding doors that open to the second-floor deck, which has views of the mouth of the Kennebunk River and the coastline, all the way down to New Hampshire. The custom buttoned headboard was made to fit the angles of the sloped roofline. The walls are Ralph Lauren suede paint. 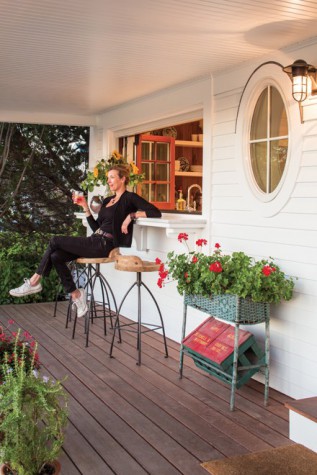 The kitchen's bifold window opens onto the porch's bar. The stools are the same stools used at the restaurant Earth at Hidden Pond. 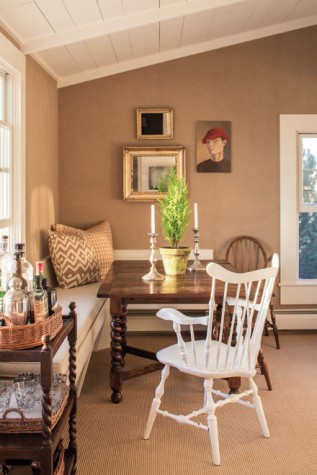 A corner of the upstairs suite with a built-in banquette around the dining table and randomly spaced painted planks for the sloped ceiling. The pairing of an old portrait and a mirror is something Tim Harrington has employed at the inns that he and his business partners own. A wall-to-wall sisal rug covers the floor. 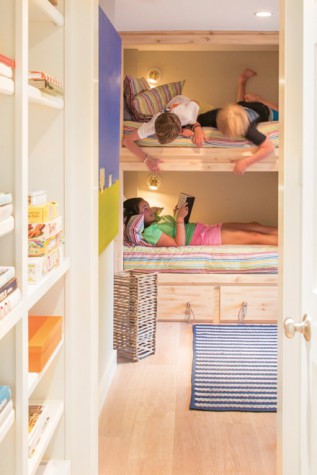 A nautically inspired bunkroom for children, with built-in beds of pine, drawers with rope pulls, and striped duvets. 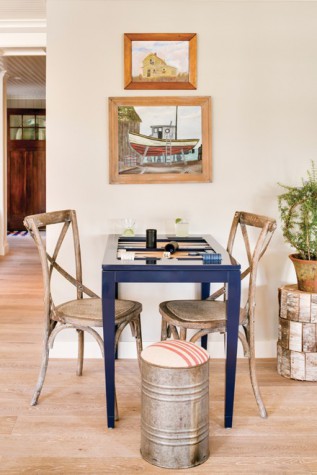 Louise Hurlbutt found this backgammon table for the Tides Beach Club, one of the hotel properties that Tim Harrington and his business partners own. Having enjoyed watching guests at the table, Harrington decided he wanted the same table for his house. The paintings are flea market finds. The metal stool is from Hurlbutt Designs. 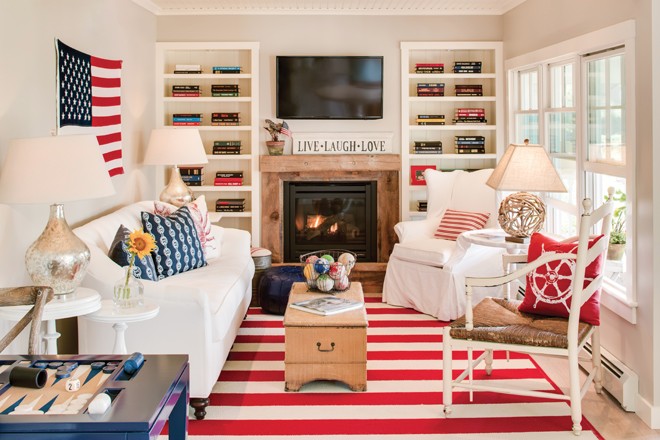 The living room design began with the red and white striped rug and grew to include the flag, which had belonged to Tim Harrington's father, the white sofa and easy chair, and other accessories. Books are stacked neatly on the shelves on the far wall and arranged in the many orderly bookcases throughout the house. 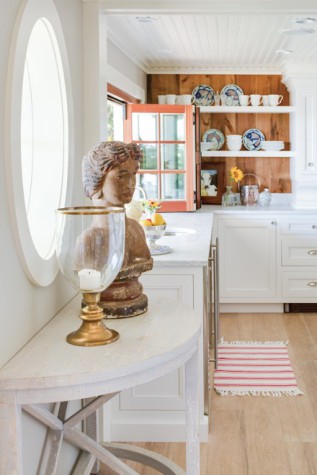 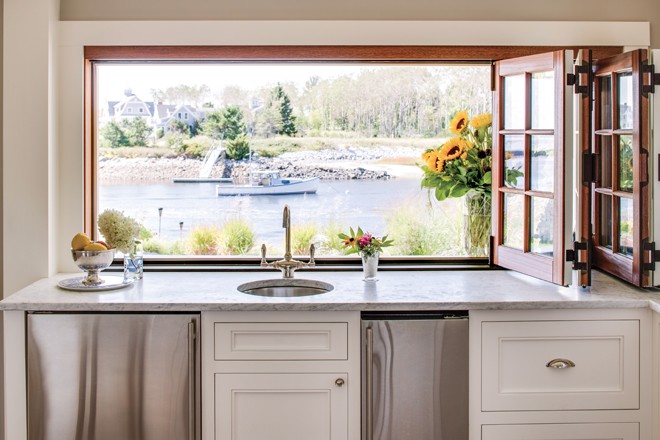 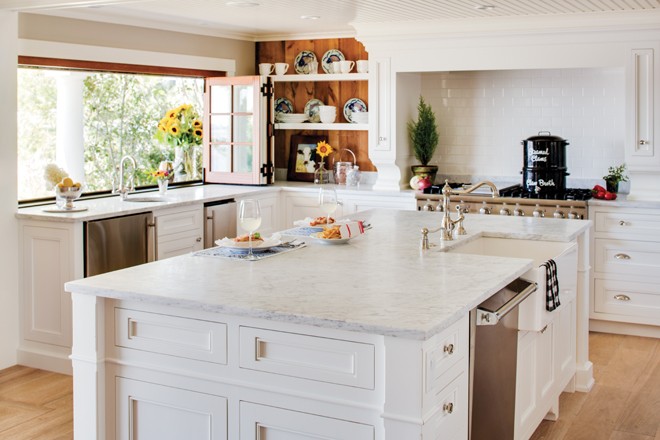 With only two interior walls, the kitchen doesn't have much room for upper cabinetry. To create additional storage, Adam Bialas of Bialas Custom Interiors of Holyoke, Massachusetts, built an oversized kitchen island. 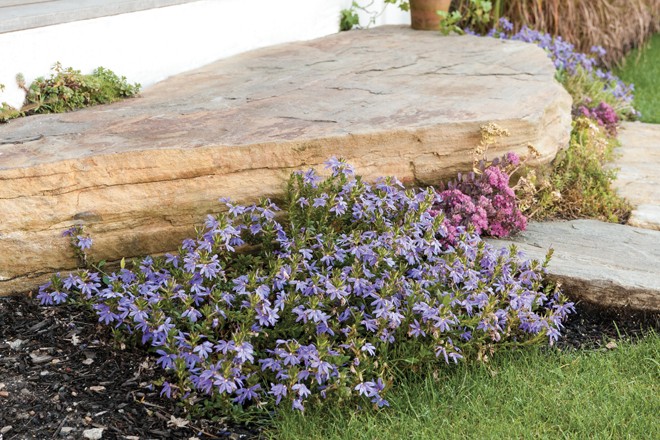 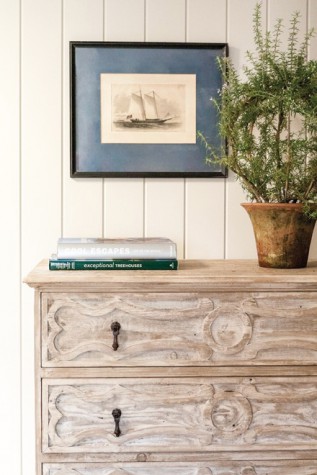 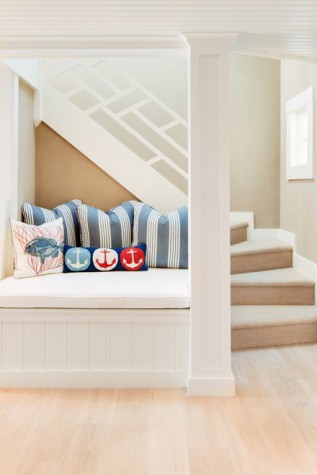 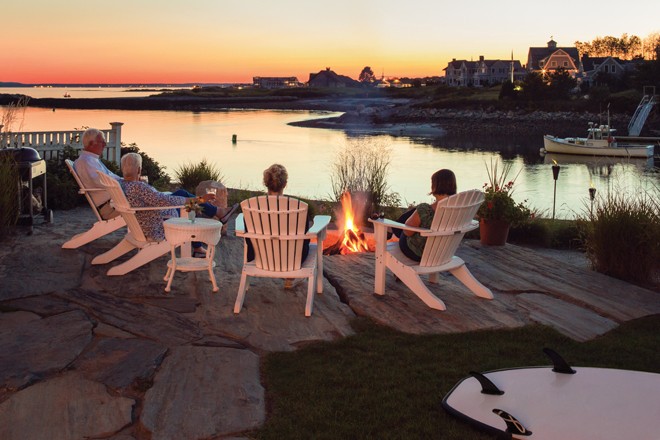 A private home for a hotel person

Real estate developer and hotelier Tim Harrington is responsible, with his business partners,  for nine upscale hotels and inns in the Kennebunk area. Their properties include luxury bungalows in the woods; bright, chic rooms at Goose Rocks Beach; a New England inn; and elegant, European-style accommodations: Hidden Pond, the Tides Beach Club, the Kennebunkport Inn, and the Grand Hotel respectively. So where does the Miami-based Harrington rest his weary head when he is in town? The answer has changed in the 29 years that Harrington has been coming to the Kennebunks. In fact, it has changed eight times, as he’s bought, renovated, then sold homes for himself. Up until a few years ago, Harrington lived in a large, turn-of-the-century shipbuilder’s house with many rooms. “It was really fun,” he says, but too big and lonely in the winter. Sociability was on his mind when, in 2009, he saw an old post-and-beam house across the river from Sea Grass Lane, a road of luxury residences that he had developed with Michael and Stephen Spenlinhauer of Kennebunkport’s Seaport Development Group. Originally built as a single-family home in the mid-1880s, the post and beam neighbored the Breakwater Inn, also built in the 1880s. (It operates to this day as the Breakwater Inn and Spa.) By the time Harrington came across the house, it had been divided into three units, two of which were available and one of which was being used by an artist. Although the house was no longer what it had once been, Harrington was drawn to its location: on the mouth of the Kennebunk River with tremendous, wide views of the river, ocean, and coastline. “The mouth of the river is a special place,” Harrington says. “Every boat that comes in and out of the harbor goes by the house.”

For his hotels, Harrington has frequently collaborated with interior designer Louise Hurlbutt of Hurlbutt Designs in Kennebunk, builder Kevin Lord of Thomas and Lord in Kennebunkport, and landscape architect Ted Carter of Ted Carter Inspired Landscapes in Buxton, and he went to the same team for his home. At first, Harrington renovated the second floor, creating an open living and dining space, master bedroom, and small guest room, and replacing existing finishes with randomly spaced painted planks for the ceiling, Ralph Lauren suede paint for the walls, and an appealingly textured wall-to-wall natural sisal rug for the floor. Built-in banquette benches and a dining table were added to one corner of the main room; an existing L-shaped kitchen island remained in another. Three years later, when the third unit became available, Harrington was able to renovate the entire house. He kept the upstairs intact, wanting a self-sufficient, cozy space, good for winter stays and summer privacy, but he redesigned the ground floor for family and friends. Now the downstairs consists of a large entryway with a reading nook, a great room (with living room, dining area, and kitchen), two small bedrooms, and a nautical bunkroom intended for Harrington’s nieces and nephews.

Thomas and Lord completely updated the exterior with new windows, new cedar shingles and clapboards, and a rebuilt second-floor porch. The new windows capitalize on the water views, and the current layout encourages outdoor living, thanks to a new screened porch and a narrow new open-air porch with a bar that can be accessed through the kitchen’s mahogany bifold window. Where there had once been a parking lot with numbered spaces, there is now a fire pit of roughback stone surrounded by ornamental grasses, thanks to Ted Carter.

As for the interior, Harrington loves red, white, and blue, so these colors dominate the downstairs, in a flag from Harrington’s father hanging over the white living room couch, a red and white rug on the living room floor, and rattan chairs with blue cushions and white piping on the screened porch. The design impulse is cottage style with rustic, beach-influenced, or classically chic touches. These include barn board accents, floors of engineered white oak with whitewash, and white subway tile and gray Carrera marble for the kitchen countertops. The reclaimed wood that backs the kitchen’s open shelves is a dumpster-diving find, acquired from the work site of a home that two of Harrington’s Miami designer friends renovated in Cape Porpoise.

How do Harrington’s longtime collaborators manage the transition from working on his business projects to working on his homes? Easily, it turns out. “We have this shorthand together. We just think the same way,” says Hurlbutt, and Lord readily agrees. Harrington says, “I love Louise, and I love Kevin. We work on so many projects together that we start to speak the same language. If an issue comes up and I’m not there, the way they would solve a problem is the way that I would solve a problem.”

It’s more than just friendship that links the public and private projects, though. Harrington designs his hotels with the “things I most love,” he says, and he wants such items in his home as well. As a result, finds for his hotels sometimes show up in his personal space. A chandelier made out of old wine barrels used in the cottages at Hidden Pond now also hangs from his master bathroom’s cathedral ceiling. Harrington loves a lacquered backgammon table that Hurlbutt found for the Tides Beach Club. “People just gravitate to it at the Tides,” Harrington says. “I had to have one in my house.” A prototype for a fireplace that didn’t seem quite right for Hidden Pond was perfect for Harrington’s winter suite. Harrington has a favorite portrait that was intended for the Kennebunkport Inn, but his business partner, Debbie Lennon, thought it was too spooky, so the painting now hangs on his second-floor landing. Two sliding barn doors used for the master bedroom came from the renovation of Tia’s Topside Restaurant and Bar, another Kennebunk property Harrington helped establish. (Harrington and his partners also happen to have six restaurants in the area, among them Earth at Hidden Pond and Ocean at the Cape Arundel Inn.)

Beyond these acquisitions, the home is filled with curious artifacts and belongings from Harrington’s previous residences, flea market finds like paintings and old mirrors, and direct purchases from Hurlbutt Designs.

And then there are the books.

Books are everywhere, laid on shelves, piled on tables, filling the many built-in bookshelves throughout the house. “There’s nothing better than books as decoration,” Harrington says. “They warm up a room.” The books are so neatly aligned on tables and shelves they look like they might have been picked for size instead of content, but in fact Harrington is an avid reader. “I like everything,” he says. “I read a lot of Maine writers. I like mysteries. I love historical novels. Political stuff. Autobiography.” On a recent day, the only book that wasn’t neatly organized in his house was the one splayed open on his bed. “I like to sleep surrounded by books,” he says.

Someone conscious of Harrington’s penchant for change might wonder, “Well, when will this beautiful house be for sale?” But now that Harrington and his partners have perfected the house, he says he’s staying put. “I know this is my final place in Kennebunk, because this is just my place. I could never replicate the location and the views.” Plus, he likes being near the Breakwater Inn. “I am a hotel person. I like the energy of hotels,” he says. So there’s another thing to love about the house: “I feel like I am on the grounds of the hotel. It’s just not one of mine.”