Art in the House 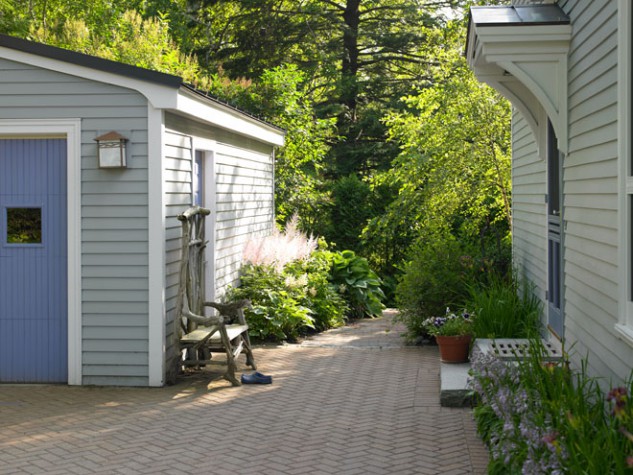 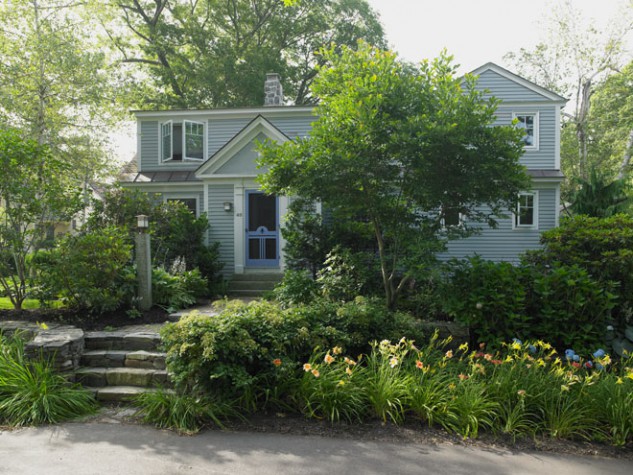 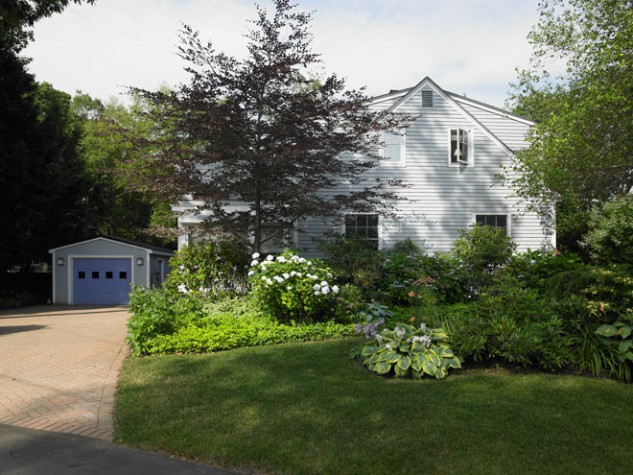 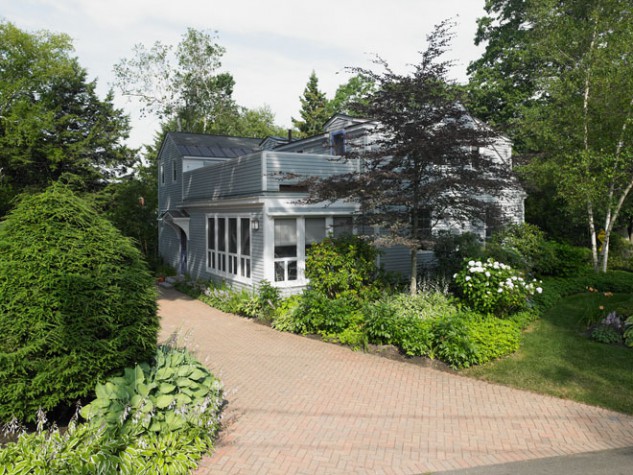 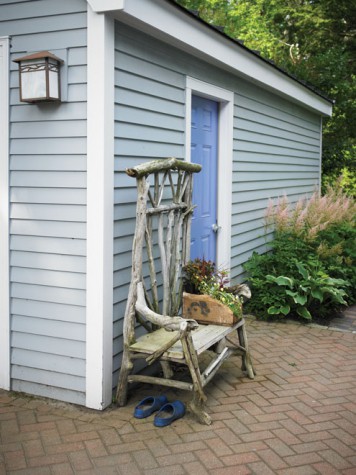 A bench crafted from twisted pieces of wood and a bed of variegated hostas and feathery astilbe dress up the detached garage. 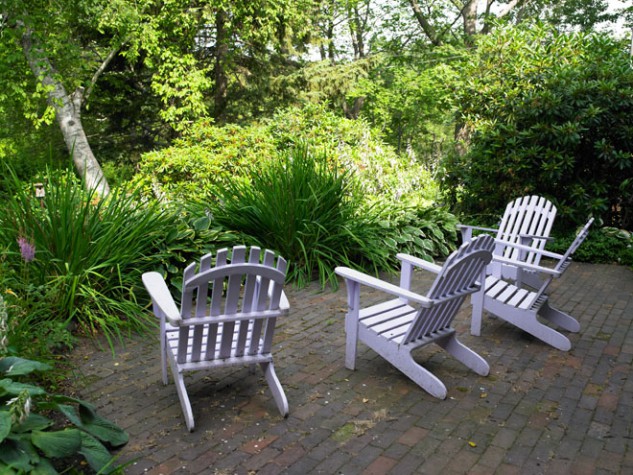 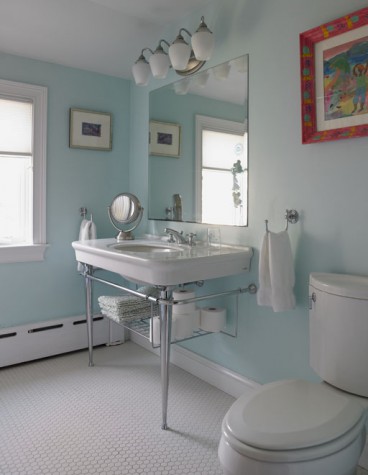 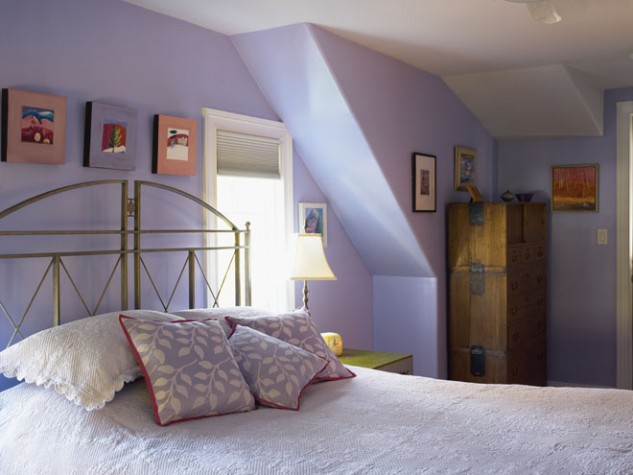 The bright red brushstrokes in a collection of acrylics by Lindsay Hancock, another Maine painter, punctuate the lavender walls in the master bedroom. “For as long as I can remember, purple has been one of my favorite colors, so I went with it,” says Jane—inside the house and out. 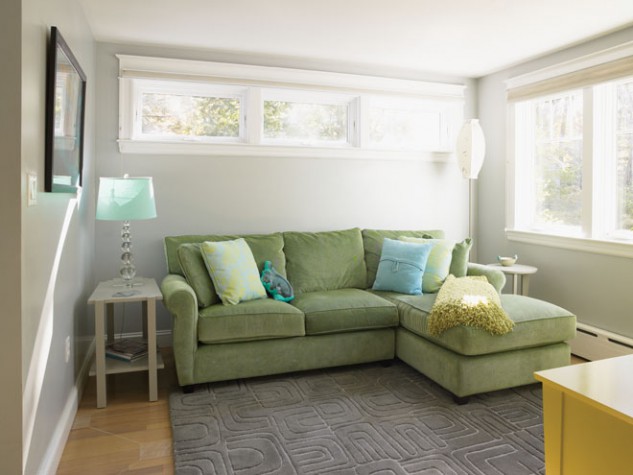 Whether it’s furniture or art, Jane likes to buy local. In the den, a Company C sectional is matched with an Angela Adams rug and a trio of tables from Furniturea—all Portland-based businesses. 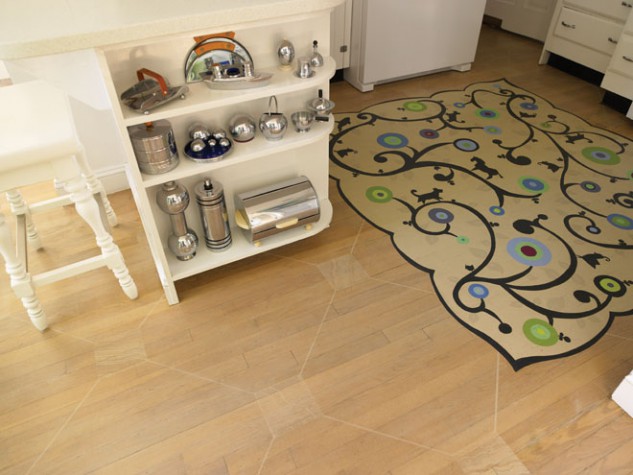 Jane wasn’t a fan of the reddish oak floor in the kitchen, so Locke and Moberg applied a whitewash before layering on hand-painted rug and tile designs. The shelves hold a collection of Chase Chrome from the 1930s. 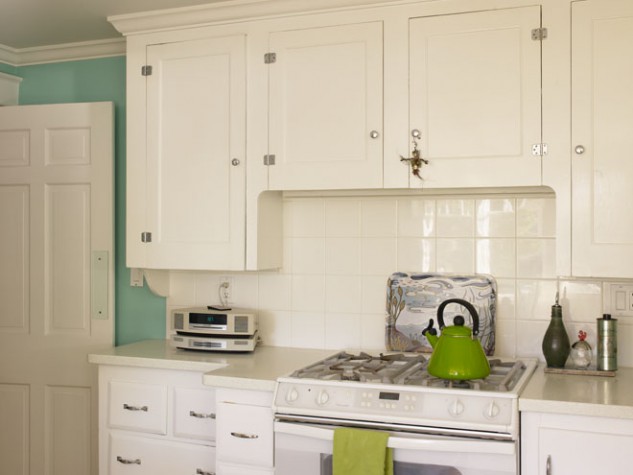 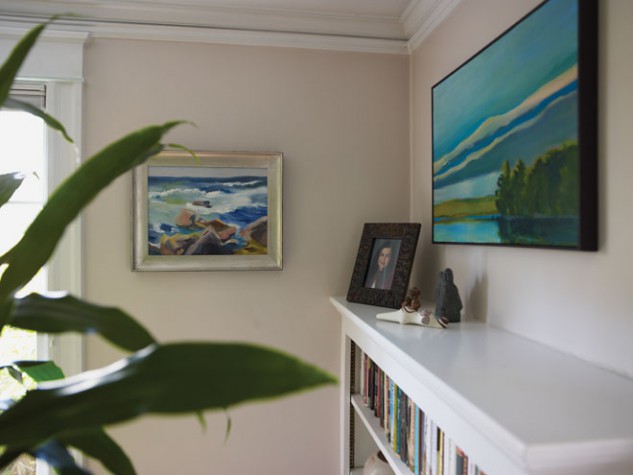 A large seascape by Connie Hayes hangs near a painting by Jane herself: “I have never been able to paint, but one night, much to my surprise, I created that,” she says. “I wish there were a special drink that could make me do it again.” 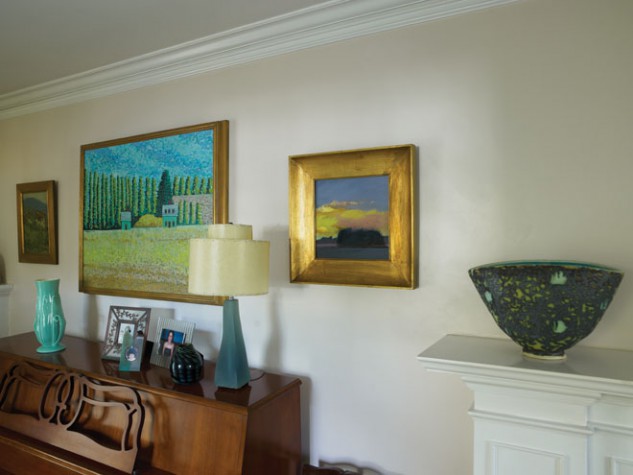 In the living room, works by Rockland artist Connie Hayes and Alexander Bower, a former director of the Portland Museum of Art, flank a vibrant oil called Two Houses in Orland. The vase on the mantle is by St. George potter George Pearlman. 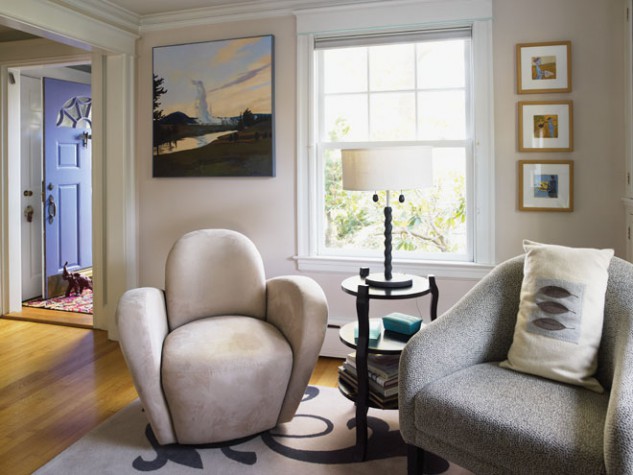 An oil painting of Yellowstone National Park by Maine artist Cindy MacKay shines above a curvaceous suede chair in the living room. A set of whimsical acrylics by celebrated local painter Robert Shetterly echoes the leaf pattern on a pillow below. 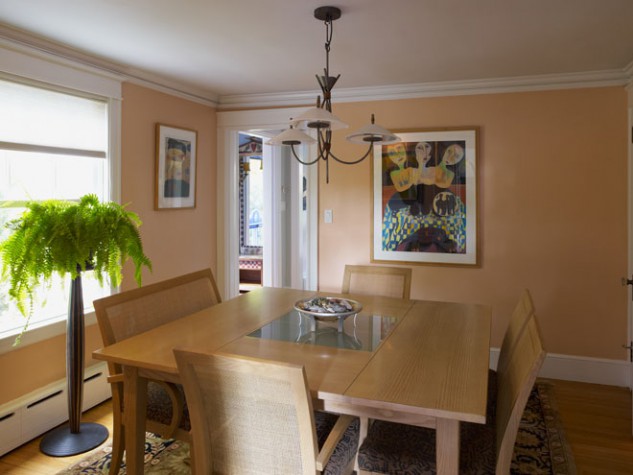 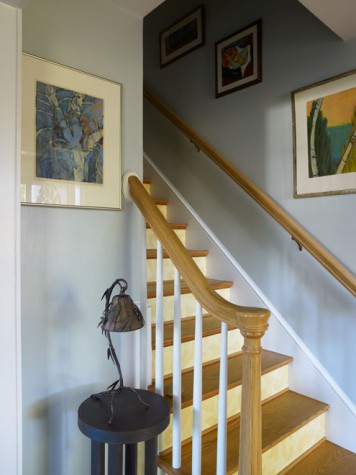 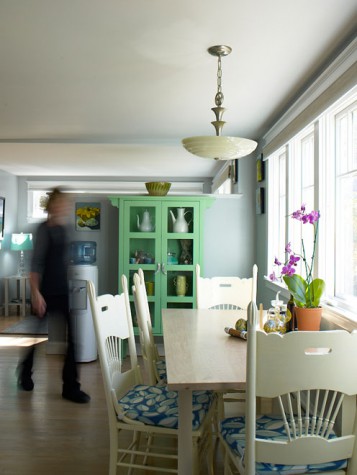 A doctor creates a cozy home for her family and her collections in Cape Elizabeth.

When you step through her cheerful, periwinkle door, Jane, a physician who lives in Cape Elizabeth, will offer you tea and a pair of slippers. Taking in the comfortable, colorful rooms, your eyes will fix on vibrant oil seascapes, a swirling, hand-painted “rug,” a doll-like creature of undetermined species—and soon the visit will turn into a guided tour of the paintings and sculpture that adorn virtually every available surface in the home. If you’re familiar with the Maine contemporary art scene, you may recognize some prominent players: Robert Shetterly, Connie Hayes, Alice Spencer, David Cedrone, Sharon Townshend, Marilyn Blinkhorn, and Marie Locke. And if this world is new to you? Let’s just say it’s pretty hard to feel intimidated when you and your host are padding around in fuzzy footwear.

Jane began collecting art in earnest when she purchased her 1920s Cape 16 years ago. The home needed furnishing, so she started frequenting art fairs, charity auctions, and eventually galleries. Before long, she had a full-fledged hobby. “Being a person who is trained as a scientist, I live most of my life out of the left side of my brain,” says Jane. “So, for me, art and design are an outlet. I like to be surrounded by beautiful things.” The house has proved to be an ideal canvas for her collections. “It’s a lot of little rooms, which I think have great personality and make for more interesting spaces to display art than a cavernous open plan,” she says.

A modest footprint was what she had in mind when, after parting ways with her husband, she began searching for a place to settle down with her two daughters. “It’s a value that’s important to me to not have more house than I need; I don’t want to feel like the house owns me,” she says. A friend told her about a charming, 2,000-square-foot Cape that would soon be going up for sale, and she bought it the day it went on the market. “I didn’t look at any other houses, and really, I think I decided I wanted this one before I even walked in,” says Jane. “I loved the neighborhood, the yard, the size—it just felt right.”

Still, the home was not exactly move-in ready. The entire upstairs consisted of one bedroom and a bathroom, with deeply sloping ceilings that limited the usable space. Jane hired a builder to raise the roof and alter the floor plan to include a bedroom for each family member, two bathrooms, a central living area, and a rooftop deck. Downstairs, she expanded the indoor living space by turning a screened porch off the kitchen into a den and adding a small entryway for coats and gear. She also put in a spacious new screened porch that can be accessed through an interior door, but not from the outside. “I did that intentionally so the porch would feel more like a room in the house,” says Jane. “I basically live out there in the summer, and I’ve even used it for parties in the winter with a space heater and the storm windows in.”

Adding to the porch’s appeal is a hand-painted floor, composed of creamy, swooping birds atop a series of pastel squares, created by Marie Locke and her former business partner Liz Moberg, of Ralff and Sons Painted Finishes in South Portland. “I did this after my daughters and I went on a trip to Grenada and I was really drawn to Caribbean colors—I want to feel like I’m on vacation when I’m on the porch,” says Jane. Locke and Moberg painted the paneled walls a pale blue then applied a bright periwinkle glaze with a dry brush—a technique known as “color washing”—for a weathered, richly textured look. Along the top, a coral, crown-molding-like band features a subtly mottled “stippling finish.”

Elsewhere in the home, Locke and Moberg’s painted effects reinterpret traditional furnishings. In the kitchen, a scallop-edged “area rug” adorned with coiling, flowering vines and the family’s favorite animals enlivens the whitewashed oak floor, which is decorated with a faint grid meant to simulate tile. In the front hall, a pale gold botanical motif on the stair risers stands in for a runner. “I think white risers are kind of boring and I’m not a fan of carpeting,” says Jane. And in the downstairs bathroom, a black and white checkerboard design painted along the tops of the walls suggests a modern wallpaper border and matches the frame of a mirror over the sink.

Most of the artists featured in the home are Maine based, but the similarities largely end there. In the living room, an oil by Connie Hayes depicting luminous bands of land, water, and sky is displayed near a David Cedrone acrylic of women in mourning, rendered in his signature cartoonish style. Across the room, a trio of acrylics by Robert Shetterly portrays fantastical, Chagall-like figures with animal masks. “My taste is all over the place,” says Jane. “I just buy what I love.”

The scene outside more closely resembles an Impressionist painting. A blur of yellow, orange, burgundy, pink, and purple daylilies, arrayed in massive beds along the street, defines the front edge of the property. In the background, dense patches of hydrangeas, rhododendrons, and hostas showcase every conceivable shade of green. Slicing through the foliage is a brick walkway anchored at either end by granite steps and designed by Jeff Rand of Rand Stoneworks in Scarborough. Behind the home, Rand created an expansive brick driveway that leads to a patio and woodsy, terraced garden. “For me, gardening is a lot like design,” says Jane. “I love getting out there and putting colors and textures together. I only have a few little areas of lawn, and eventually the goal is to have no grass at all.”

At the end of the driveway, Jane put in a garage even though one already existed underneath the home. “Around the time I bought the house I became really taken with feng shui,” she says, referring to the Chinese art of arranging one’s surroundings according to principles thought to elicit positive energy and good fortune. Having family members come and go through an attached garage is believed to create unrest, so she went for a detached unit. “I was renovating anyway, so I thought I might as well try to implement some of the theories that struck a chord with me,” says Jane. Upstairs, she had the builder reconfigure the roof so the ceilings wouldn’t slope over any of the beds—something practitioners maintain constricts energy flow and affects sleep—and move a bathroom door that lined up squarely with the stairs and the main entrance to the house. “In that scenario, the fresh energy coming through the front door essentially escapes straight down the toilet,” says Jane.

A mirror now hangs on the wall where the bathroom door used to be, “reflecting the outdoor energy around the house,” reversing the brightly colored images that line the stairwell, and creating a new set of intriguing compositions.